Mick Lear might call his blown 1953 Ford Mainline 'Old Skool', but there's a lot of new stuff in this old girl

WE LOVE our utes here in Australia. They’ve been a part of our motoring scene since 1934 and a favourite choice of street machiners for many years, and if anything, their popularity is increasing. Maybe it’s because we like to think we have a connection to the land or some kind of manual trade, or maybe we just don’t like having too many passengers. Whatever the reason, we’re just happy people keep building them, especially when they’re as nicely done as Mick Lear’s ’53 Ford Mainline. 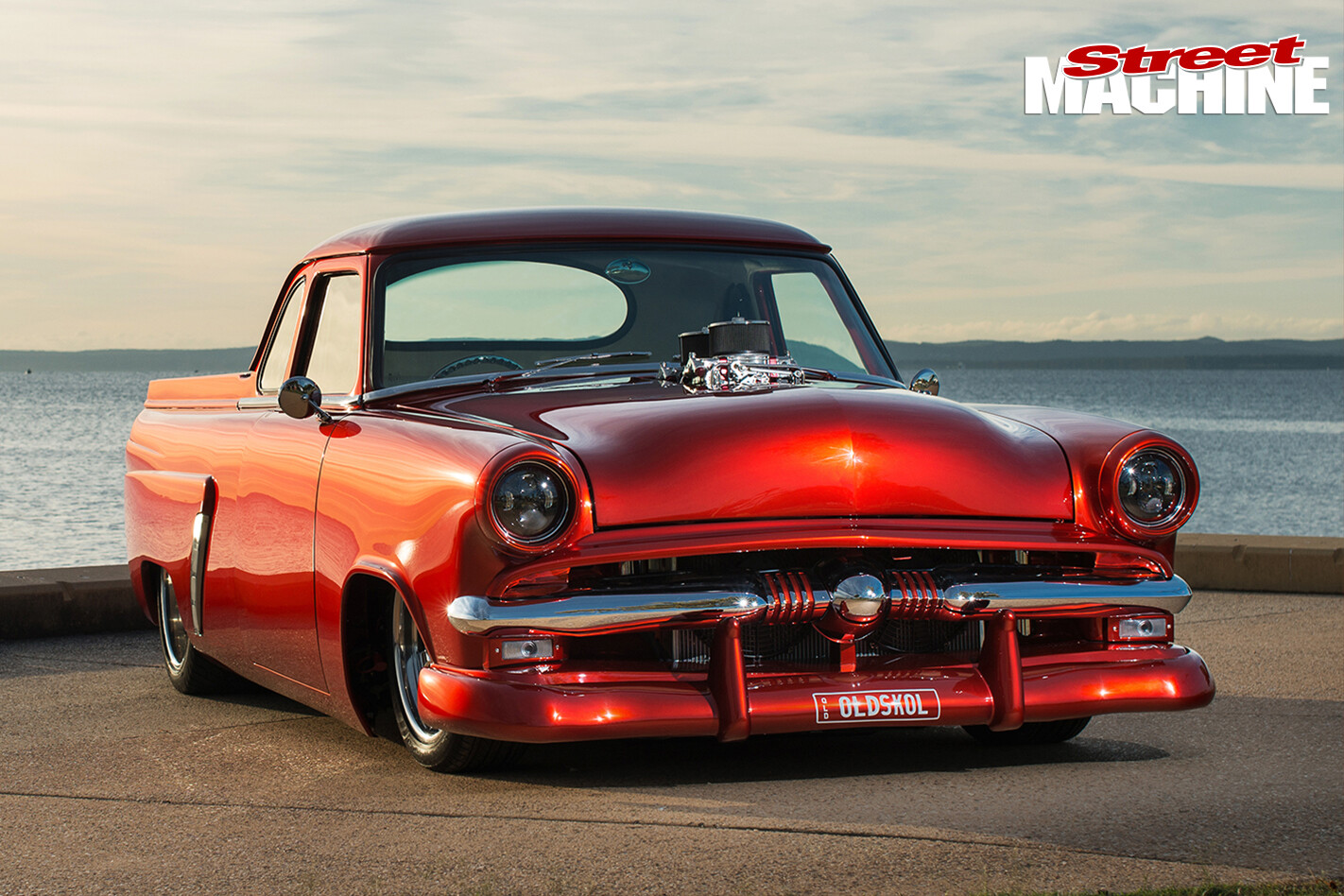 Notice I didn’t call it a Mainline ute? No need, because back in the early 50s, Ford Australia used the Mainline name to denote a ute, while Customline was the four-door sedan version. In the US they also used the Mainline name, but it was for the lower-spec or more utilitarian models, so I guess it makes sense that they used it on the utes over here.

Of course, you couldn’t call this Mainline anything but top-of-the-line. Air suspension, tubular IFS, four-wheel discs, power steering, air conditioning, killer stereo, full leather interior – this car has the lot. But that wasn’t always the case. 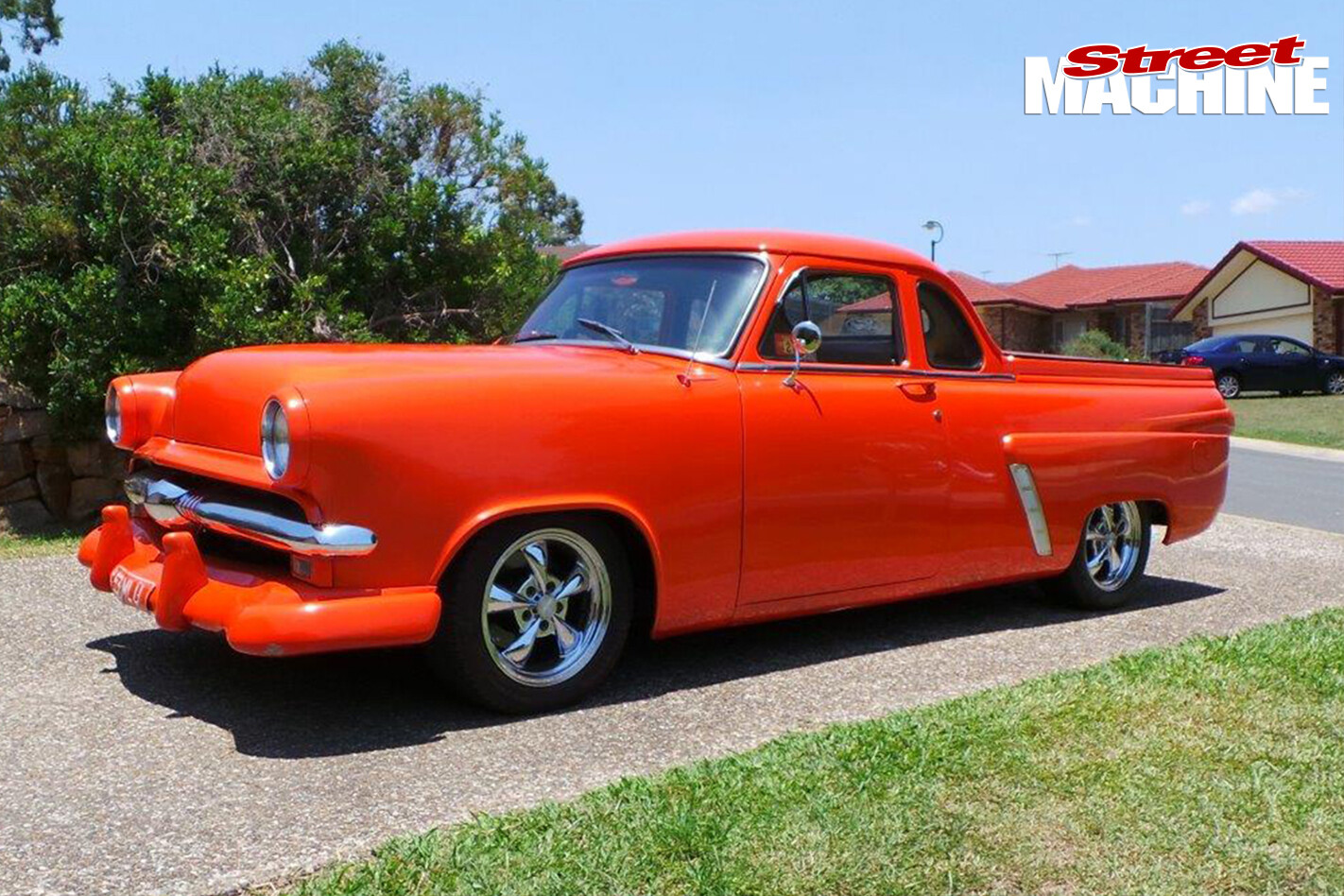 “The car was sold new to the local postmaster in Gympie, Queensland,” Mick says. “He used it until he retired in 1978, and then it was parked in a shed and remained there until 2002. I gave it a bit of a makeover; I removed the motor and running gear, and replaced it with a 302 and running gear out of a wrecked XB. A bit of panel work, some wheels and a lick of Ford Blood Orange, and then I used it for a while as a Sunday driver.”

The ute served Mick well for around 10 years. Plenty of people loved the car and it would always draw attention, but in January 2014 he decided to give it a bit of a birthday and take it to Summernats 28, which meant he had less than 12 months to completely re-engineer and rebuild the car to an elite level. “It was a pretty mad journey for the 12 months from when we decided to do it,” Mick confirms. “I guess I took a three-year job and condensed it down into a 12-month job. Oz Rods were the main builders; they did all the fabrication and panel and paint, and put thousands of hours into getting it ready.

“We were overwhelmed by the response we got from the people at Summernats,” he continues, “but we also learnt a few things down there, so when we got back we spent a few more months on it, rectifying a few bits and pieces. It’s now a finished product.” 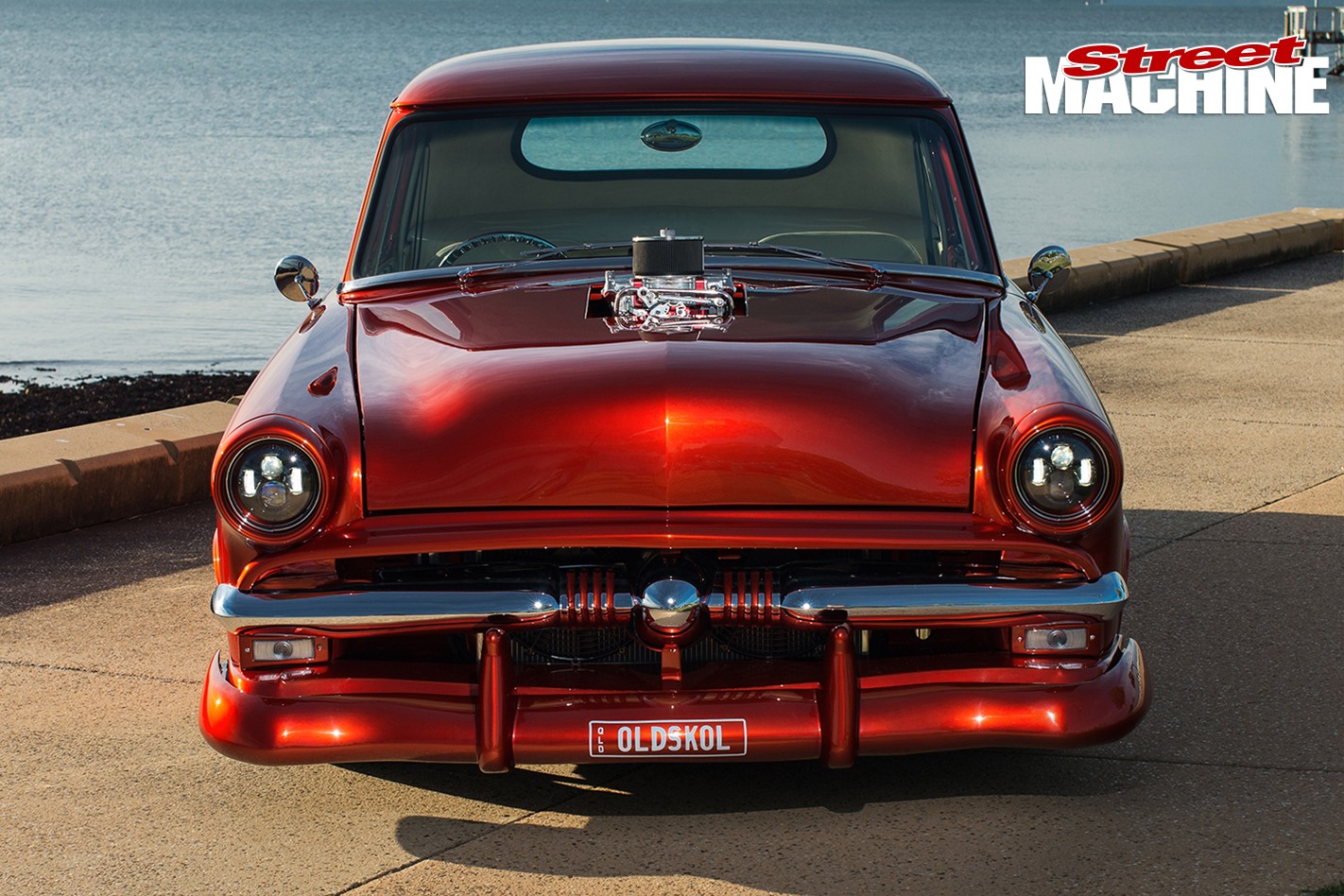 Obviously those tweaks have helped, as the awards have kept rolling in. Following a High Impact Award and third place in PPG Supreme at Summernats, the Mainline has also taken home Second Top Ute at the Queensland Hot Rod Show, a Top 10 and Sponsor’s Choice at the Mackay Hot Rod Show, People’s Choice at Cooly Rocks On, and to top it all off, an invite to Meguiar’s MotorEx. 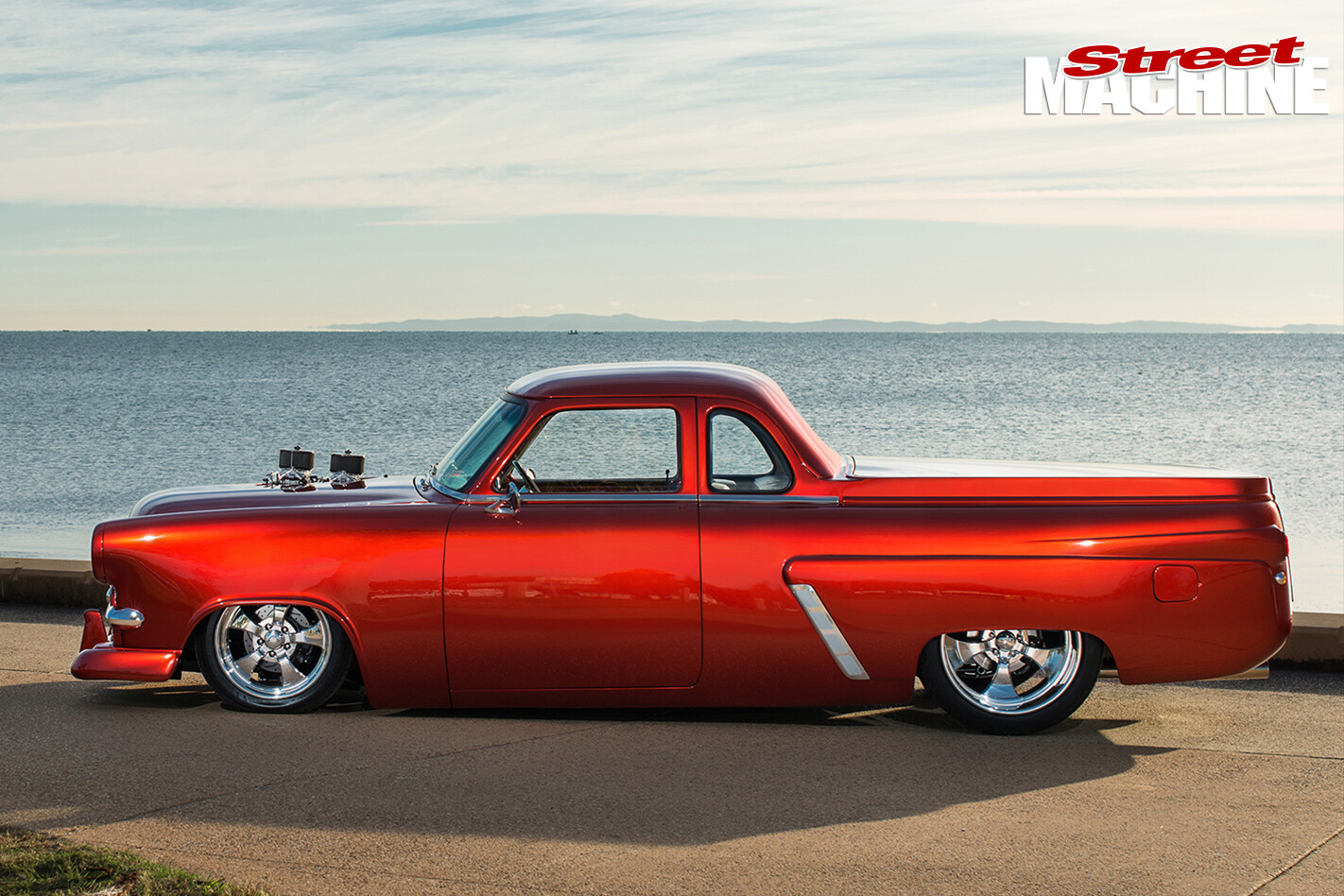 Looking at that list of awards, you might think that Mick built the car solely to haul trophies home, but that’s not the case at all: “The internals of the engine are specced and built as a skid car, so it’s super-tough, but the rest of the car is built and finished as a sleek, comfy, yet showy daily driver. She’s a real head-turner and a bloody nice car to drive too,” Mick says. 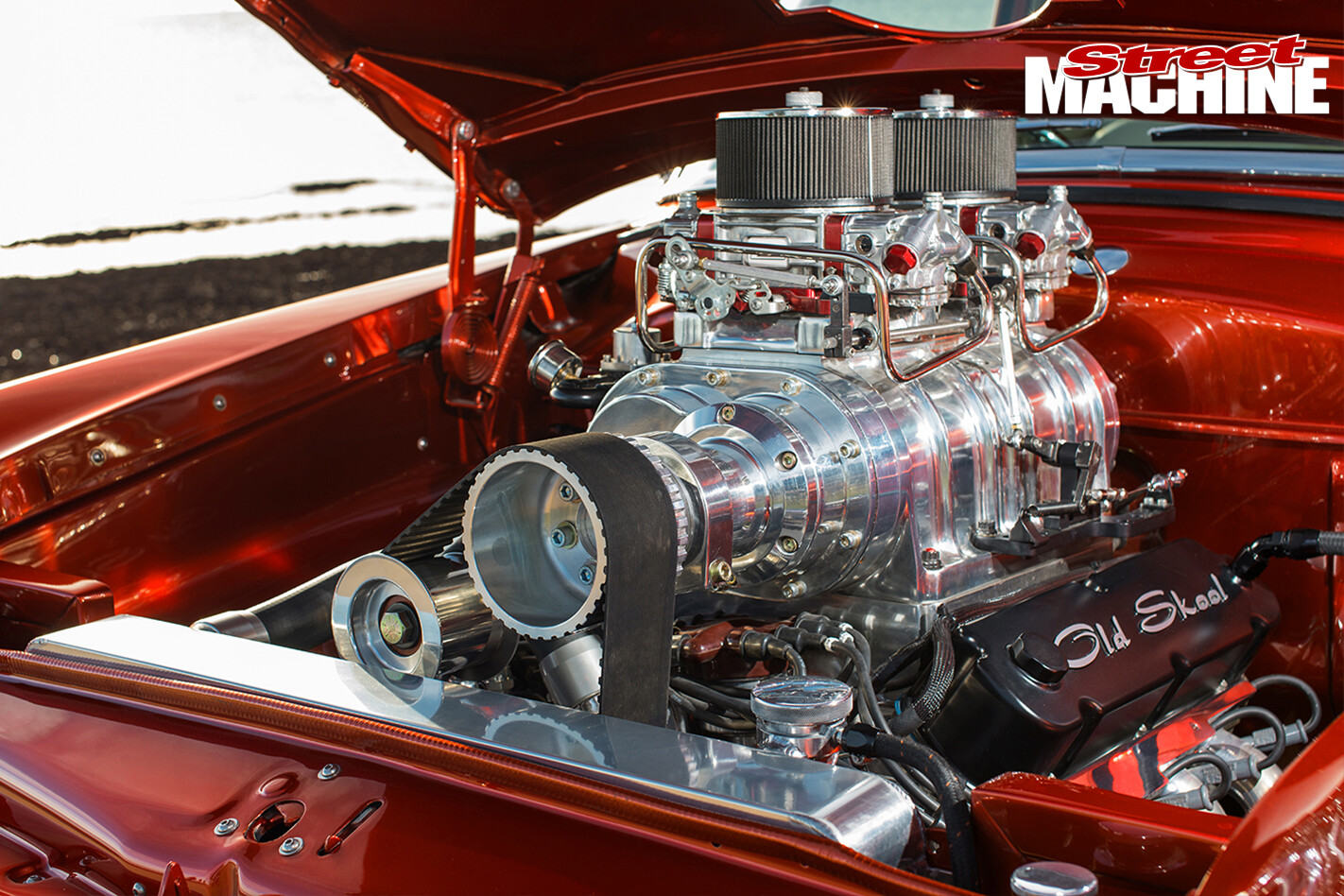 To build the blown small-block Ford, Mick turned to Fataz Competition Engines. “They do a lot of race cars and they’re renowned for building really tough motors. I said I needed a car that I can drive on the street, but is a burnout car too. The motor needs to be tough, basically; I want to get a hard-on every time I pump that accelerator down.”

Fataz started with a Dart 351 Windsor block and then bored and stroked it to 390 cubes. It’s filled with Scat H-beam rods and a 4340 crank topped with SRP forged pistons, and the Brodix heads are fitted with Ferrea valves. A Comp Cams custom-grind was selected to match up with the 6/71 BDS blower, which gets fed the high-octane pump fuel via a couple of Quick Fuel Technology blower carbs.

With just 6lb of boost the engine is already making 570hp at the wheels, but once everything has been run in, they’ll turn the wick up and hopefully end up with at least 650 at the treads. Either way, skids won’t be a problem.

While the engine bay is all business, the interior is more like Business Class. Kev’s Kustoms covered everything in leather, including the floor, and it doesn’t just come from cows. Those inserts have a pretty interesting texture – that’s because they’re stingray leather. The bench seat is actually out of a late-model car that’s been cut and shut to fit, and to keep the floor uncluttered Mick opted for a column shift on the Flaming River column, which is topped with a Billet Specialties wheel painted to match the marbled finish on the dash. That dash isn’t quite how it left the factory over 60 years ago, either. There are two extra gauge pods moulded in to the top to match the original clock, and the instrument binnacle was modified to accept a Dakota Digital VHX-1100 gauge cluster. The analogue gauges look right at home, but there’s a lot more info you can get from the digital readout below, including 0-100km/h, quarter-mile ET and quarter-mile speed. The car rides on massive Bonspeed Quasar rims – 20x15 out the back and 17x7 up front – and thanks to the chassis and suspension mods, the car sits right down over the rims and rubber. A tubular IFS with power rack-and-pinion up front is matched with a four-link in the rear, and the whole lot rides on Air Ride airbags that are individually controllable.

The dash looks like woodgrain at first glance, but it's actually been marbleised

The final touch was the sound system, installed by Anthony Koppenol from JetLeds, and it’s pretty serious: “I’m getting deafer as I get older, so I told Anthony and the boys to make it loud!” To that end, they fitted a Pioneer deck and a swag of JL Audio components – six C3-650 speakers in the doors and a 13W7 subwoofer behind the seat, powered by two HD40044 amps for the front and another two HD750/1 amps for the rear. If he wasn’t deaf before, it won’t be long now!

Between the sweet sounds coming from the blower, the killer tunes from the stereo and that in-yer-face HOK Tangerine Kandy, there’s no chance you’re going to miss this thing coming down the road – and don’t worry, you’ll see it out cruising. It might be capable of hauling trophies home, but it was built to haul arse.

Mick's Old Skool was also a contender in our 2015 Valvoline Street Machine of The Year contest.