Barra-powered VH Charger at Chryslers On The Murray

THE 26th running of Chryslers On The Murray took place on the weekend at Wodonga’s Gateway Lakes, and amongst the sea of marvellous Mopars on show, the recently completed VH Charger of Queenslander Dennis Pukallus caught our eye. Finished in Sublime green, the VH stood out from the crowd – but it’s what’s under the bonnet that had people talking.

In a world where everyone has become obsessed with returning muscle cars back to factory specs, Dennis ignored the purists and built what he wanted, how he wanted. And what he wanted was a Ford Barra turbo six under the bonnet! 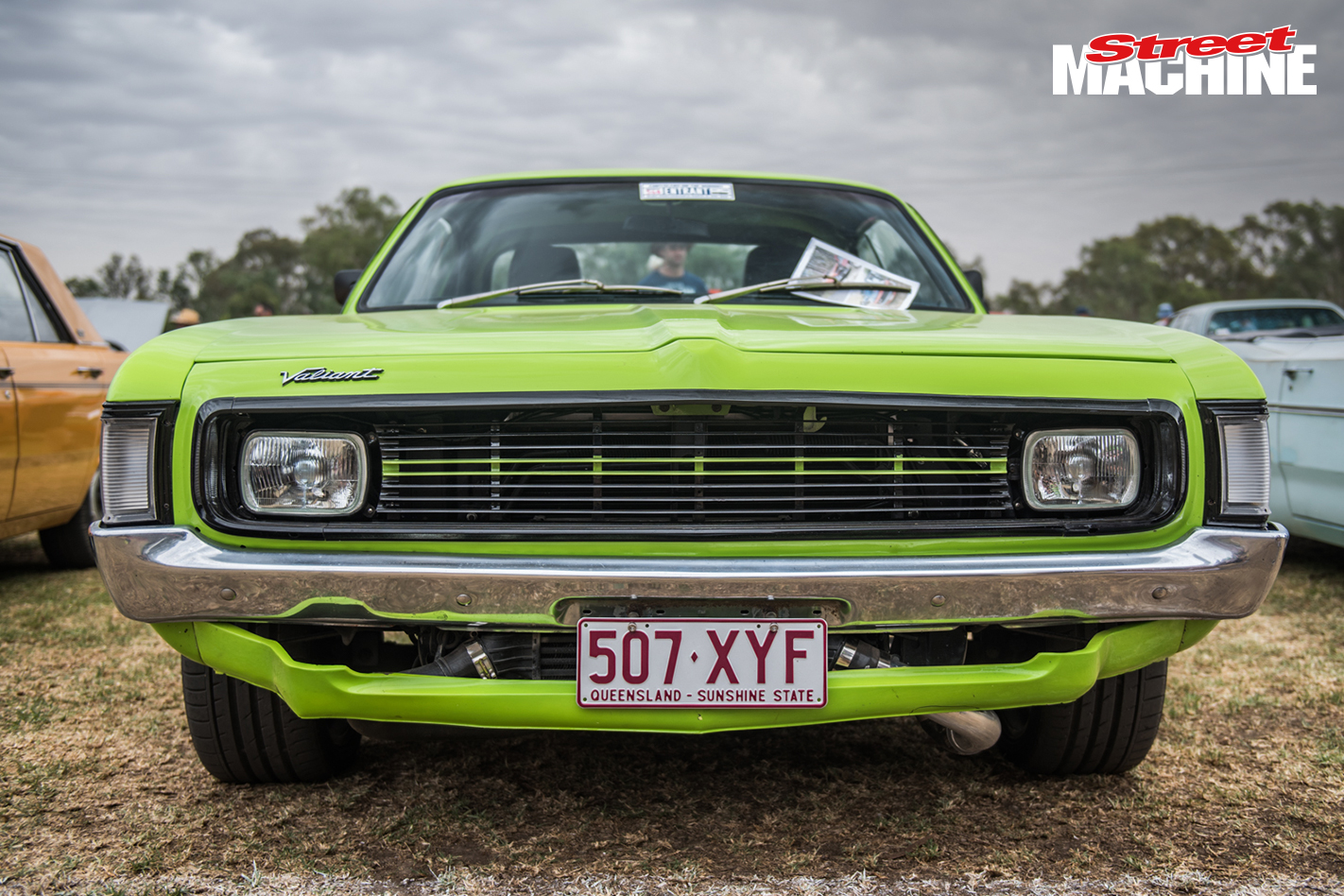 Dennis didn’t know what the crowd’s reaction would be when he rolled through the gates at COTM. “I wasn’t really sure what to expect,” he admitted. “I was fully prepared for a punch in the nose after putting a Ford motor in a Valiant! But we only had a couple of negatives from people with comments like: ‘Oh, I wouldn’t have put a Ford motor in it.” Most people were appreciative of it and understood the concept of what we’d built.” 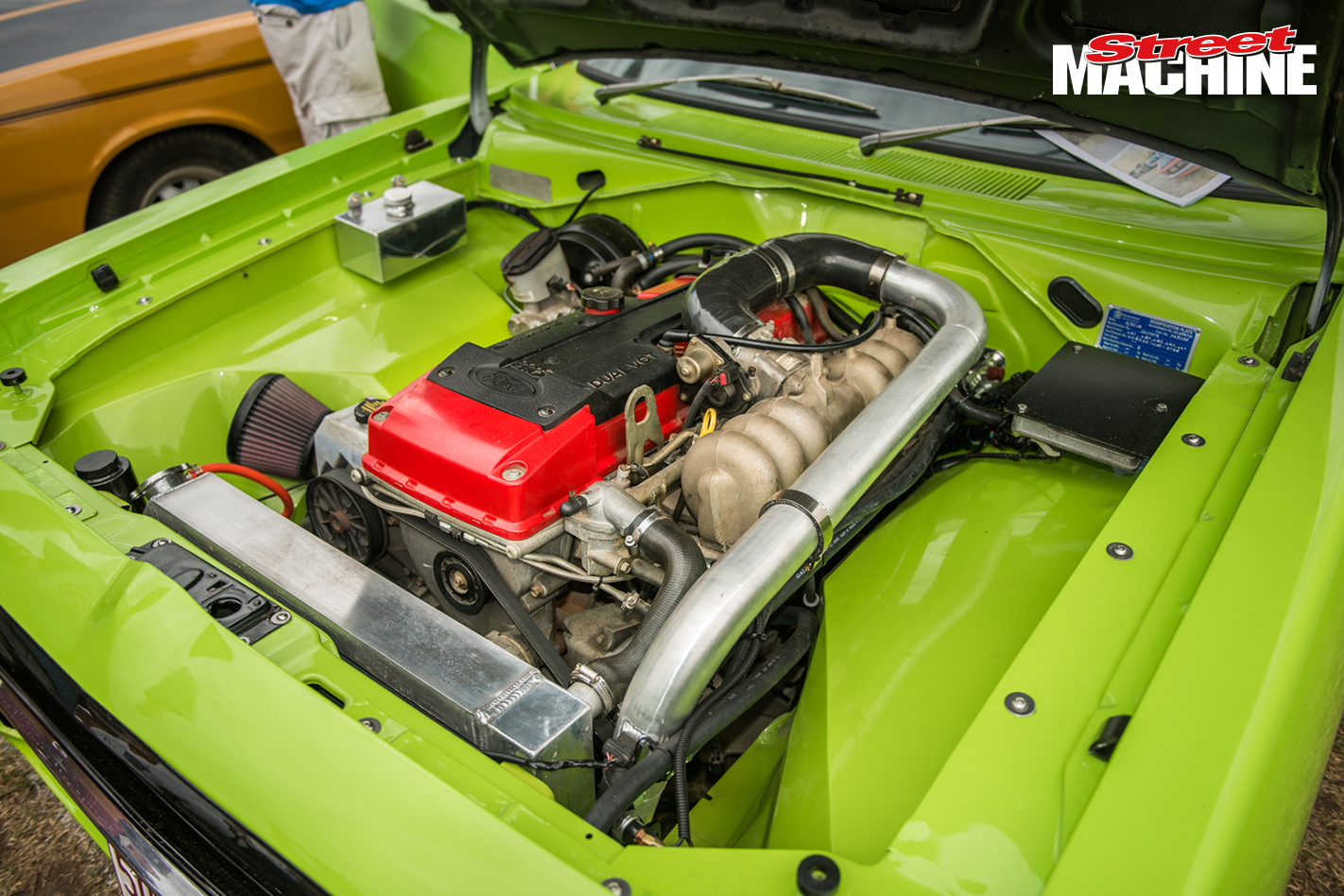 The purists can cry all they like, but their beloved 265ci Hemi inline six-cylinder is no match for the smooth-running Barra. For Dennis and son Shane, the conversion was a no-brainer: “I wanted EFI, air conditioning, power steering, reliability and modern handling,” Dennis said. “With a six-cylinder Hemi, it was all going to be over $12,000, so my son Shane, who’s done a lot of the work on the car, talked me into the Barra. For $3500 we got the complete Barra conversion and Falcon front subframe that we pulled from a wrecked BA Falcon with 70,000km on the clock. 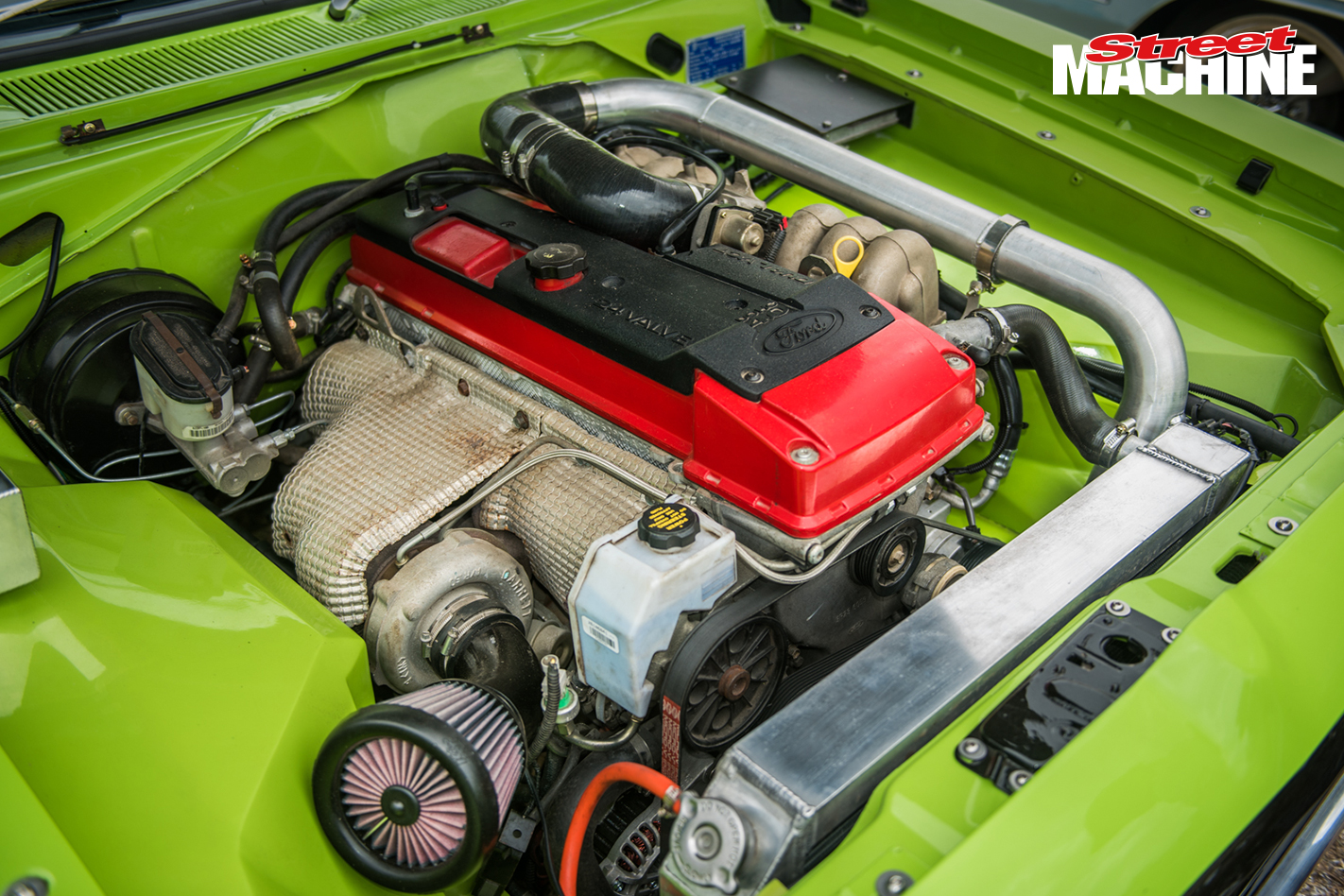 “When I originally got the Charger it was a red R/T mock-up, but it was a real Freddy Flintstone-mobile – you could see the road under your feet through the floors, the rust was so bad,” Dennis continued. “The plenum chamber and tunnel were shot too, so we replaced most of the floor and fitted the BA Falcon trans tunnel.” 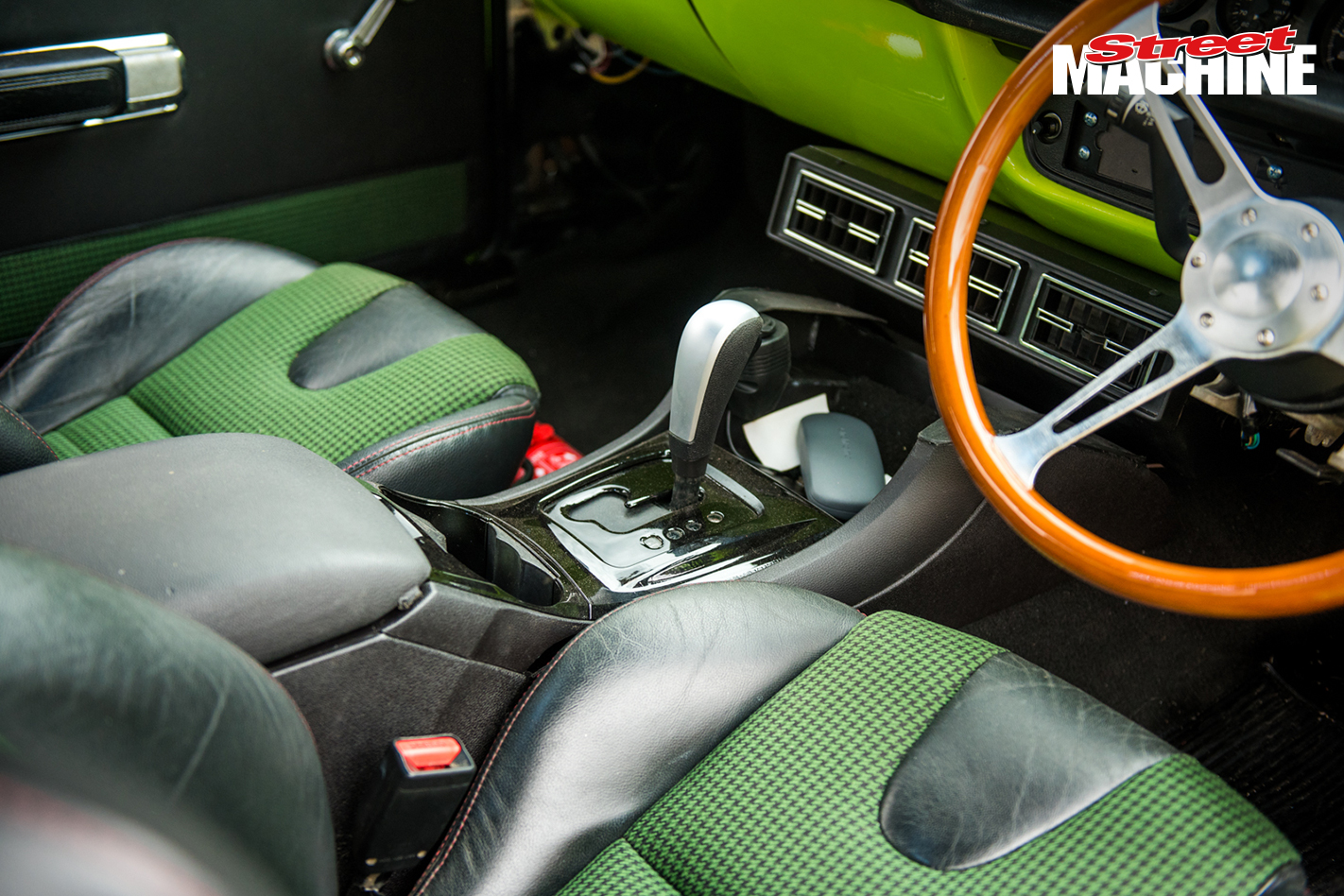 The Charger is fully engineered and street-registered; it’s been built to be driven. “We used the complete Ford front end, including the BA’s brakes, which kept the engineer happy,” Dennis said. “With the power steering and Viking coil-overs, it drives amazingly well for a Valiant. I really appreciate the modernism of it; there are no vibrations, no bumps and rattles. It’s made so much difference to the front; it’s tight and stiff. We added chassis stiffeners as well. It even has late-model air con in it.”

The Barra is backed by the Falcon’s four-speed auto, while the rear end is a BorgWarner solid axle out of an XR6 ute. Wolf wheels – 18x10 rears and 18x8 fronts – keep the whole show rolling along. 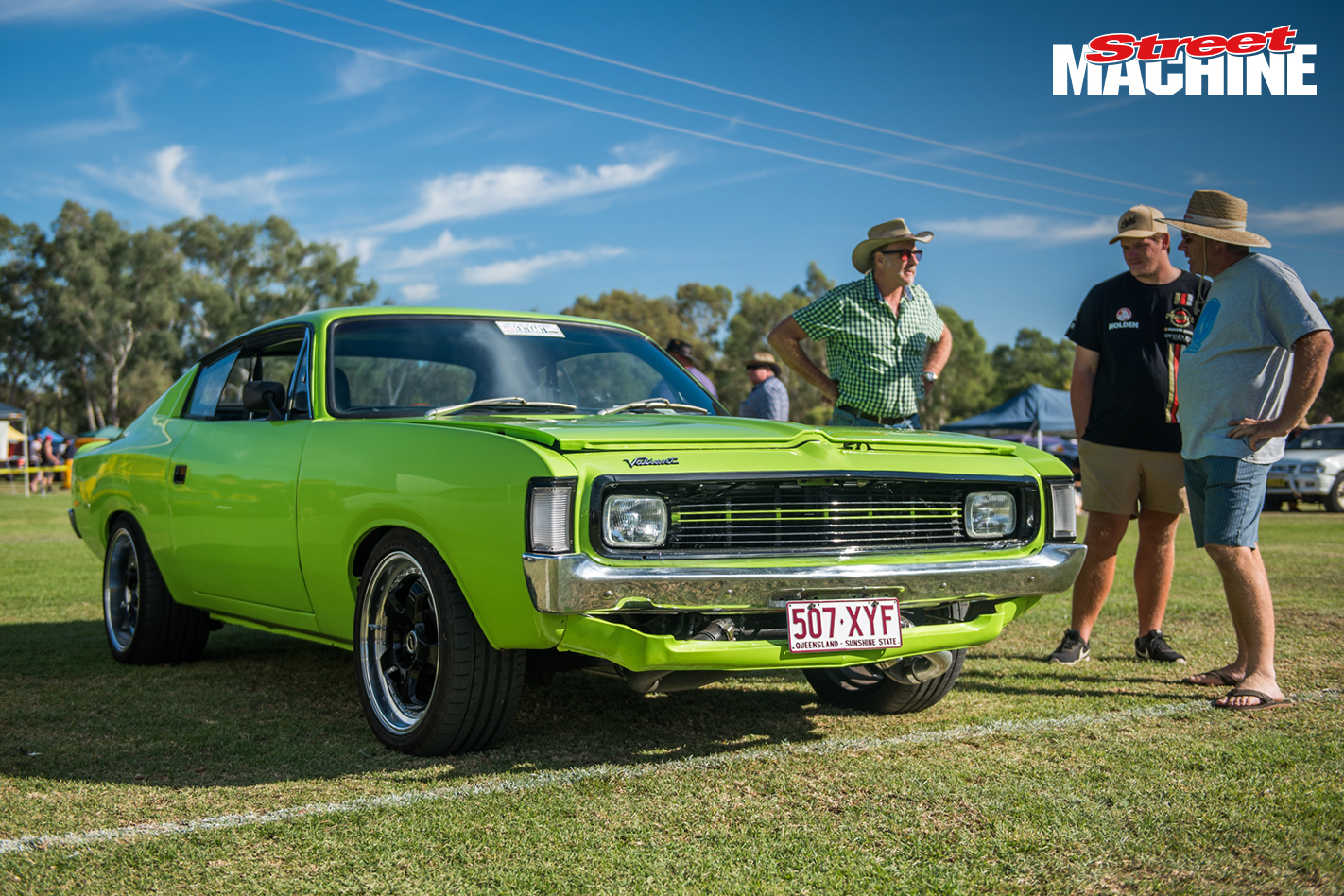 Out front the stone tray has been extended to squeeze in the intercooler, but Dennis isn’t happy with the look of it and plans to re-model the shape. “It was all I had to work with at the time,” he said. “I cut up and extended the original one. It was a bit of a rush job and not quite what I wanted, so we’re going to change it when we get home. The only other things we want to do to it are change to a different-shape intercooler when the stone tray gets redone and I have an FG intake manifold to go on it as well.

“Mostly I just want to get it out and drive it – it’s been built to drive and enjoy.”