AFTER a 15-year build process, Todd Bulkeley is justifiably proud of how his impeccably presented Datsun 1600 coupe has turned out. But ‘proud’ wasn’t exactly the word that came to mind when he first took ownership of the car. 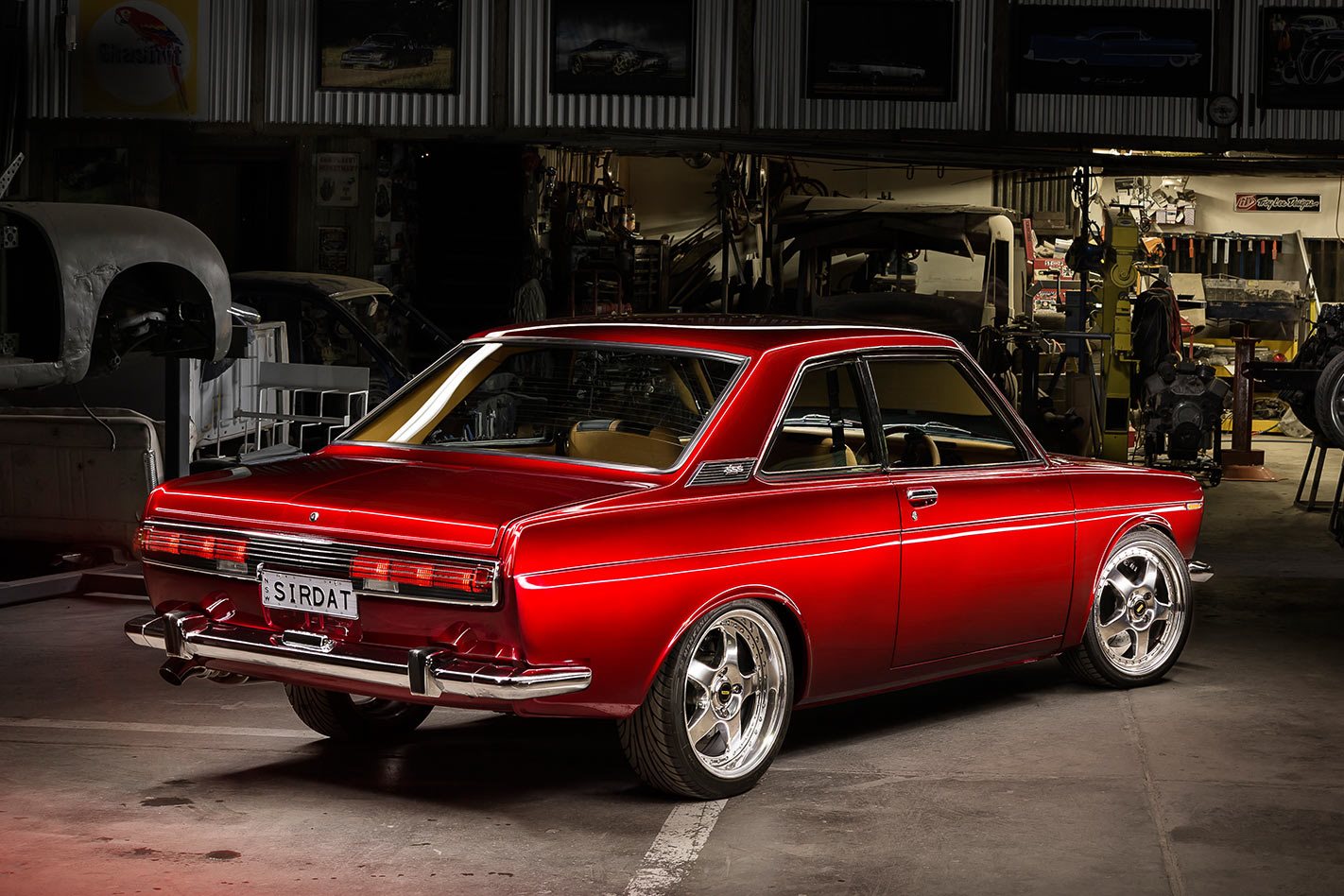 “With over 500hp, it’s definitely fun to drive,” Todd says of his Datto. “There’s more to come. Once fully tuned, it’ll easily make over 600.” The striking custom-mixed hue has been dubbed Rodney Red

“I spotted it on the Ozdat forum and imported it out of Japan,” Todd says. “The photos weren’t great, but the guy told me it was immaculate. It arrived in my driveway on my birthday – and it was horrible. It looked like it’d been dragged behind the boat the whole way – rust, rust, rust. I was totally gutted.”

Todd was told it had been driven to the loading dock in Japan, but he’s sceptical. “We couldn’t get it started. Besides, it had so much rust, you wouldn’t risk driving it on a public road.” 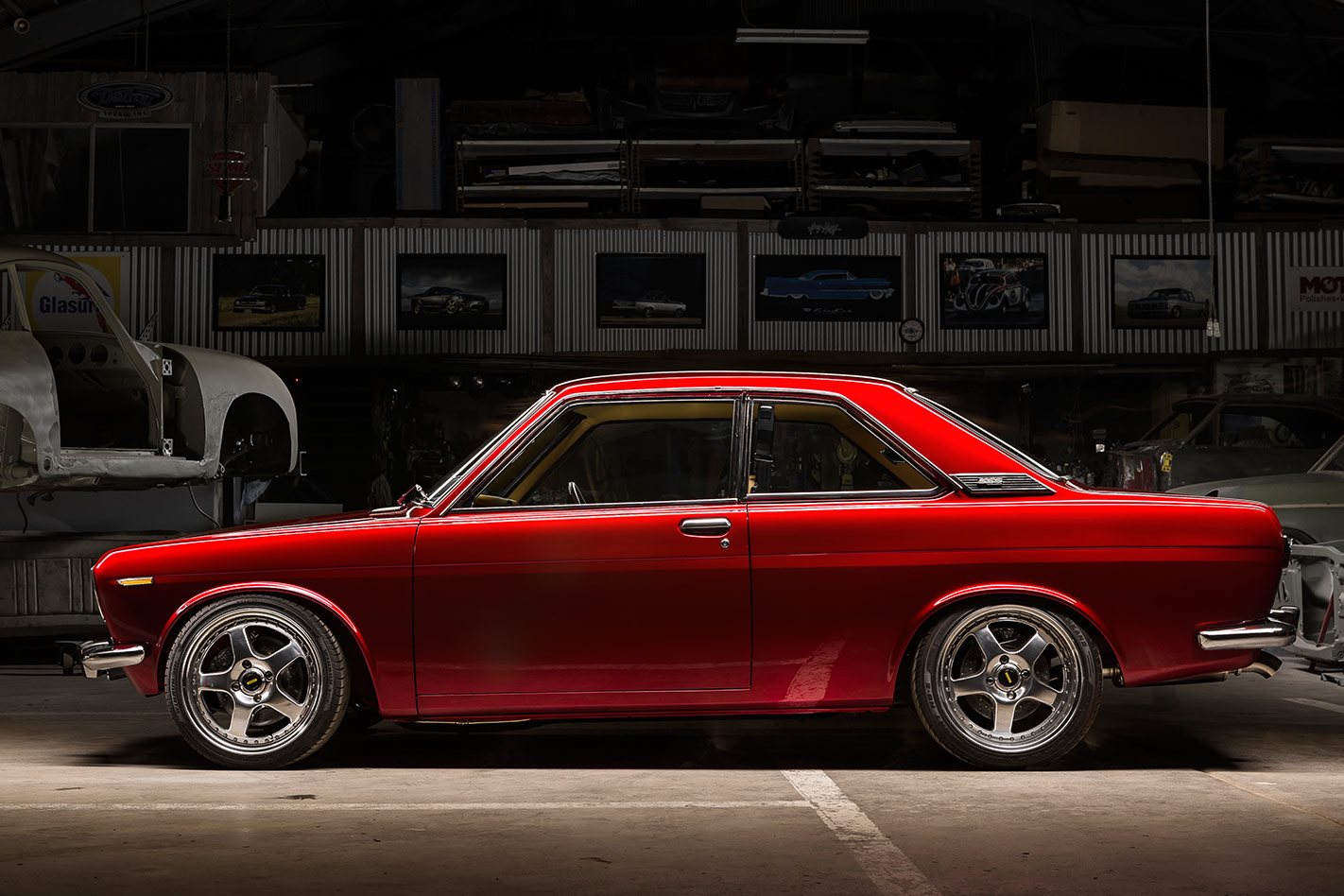 After being stuffed around by a couple of shops, Todd was advised to give John Zelukovic Smash Repairs a try.

“Ben [Zelukovic] came and looked at the car and said yes, but they wouldn’t be able to get to it for a while,” he says. “After having already sat idle for 12 months, I was like: ‘Arrgh!’ But, true to his word, Ben came ’round three months later to pick it up. That was in 2003.” 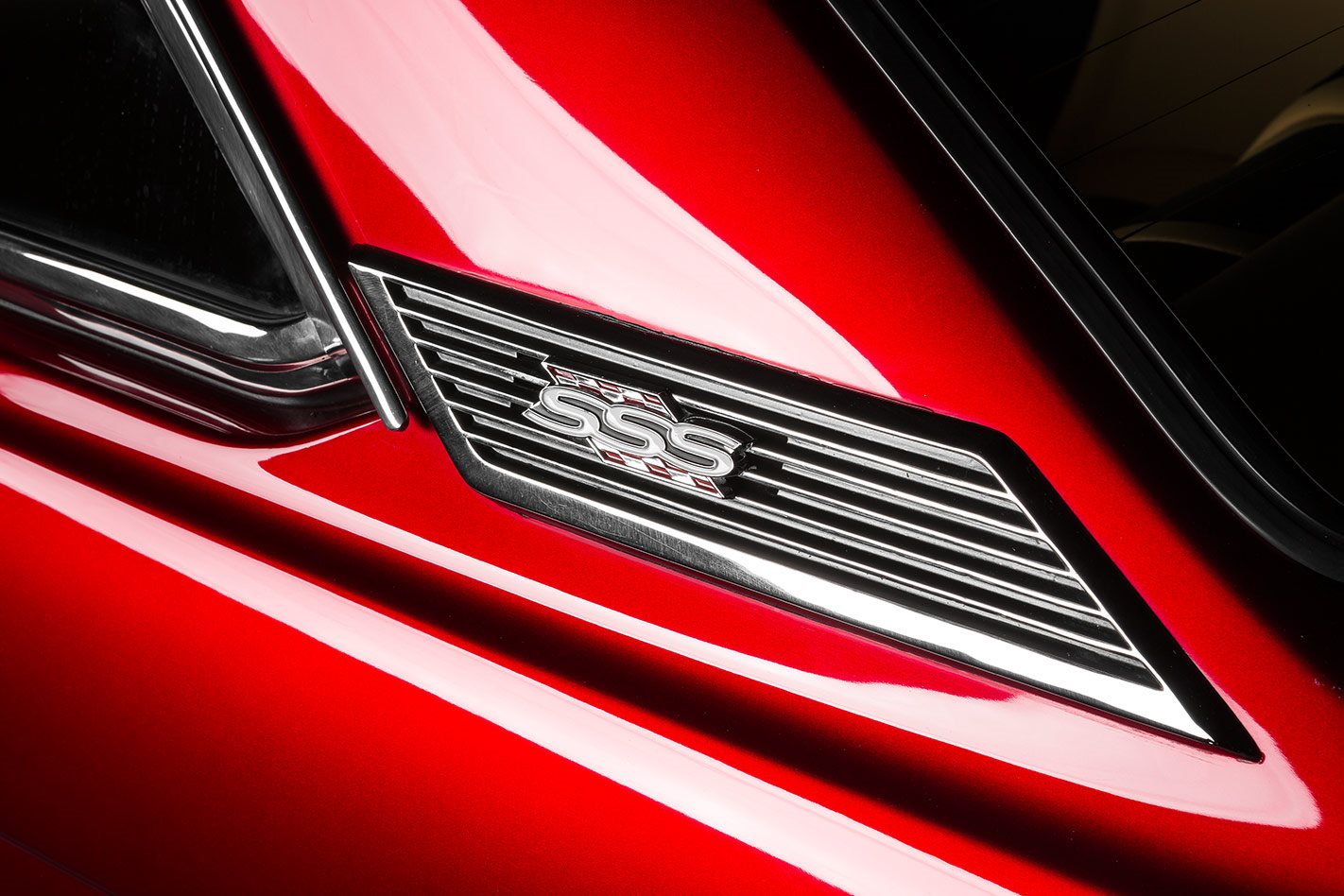 Each year Todd would ask when it would be ready and each year they would say, “Christmas” – they just never said which one! It finally rolled out of their workshop just in time to make Summernats 2017!

“It did take a long time, but I was in no hurry,” Todd says. “Also, I cannot thank John, Ben and rest of the fantastic team at Zelukovic’s enough. They’ve been unbelievable, even working on the car until 10 o’clock the night before we left for Summernats.” 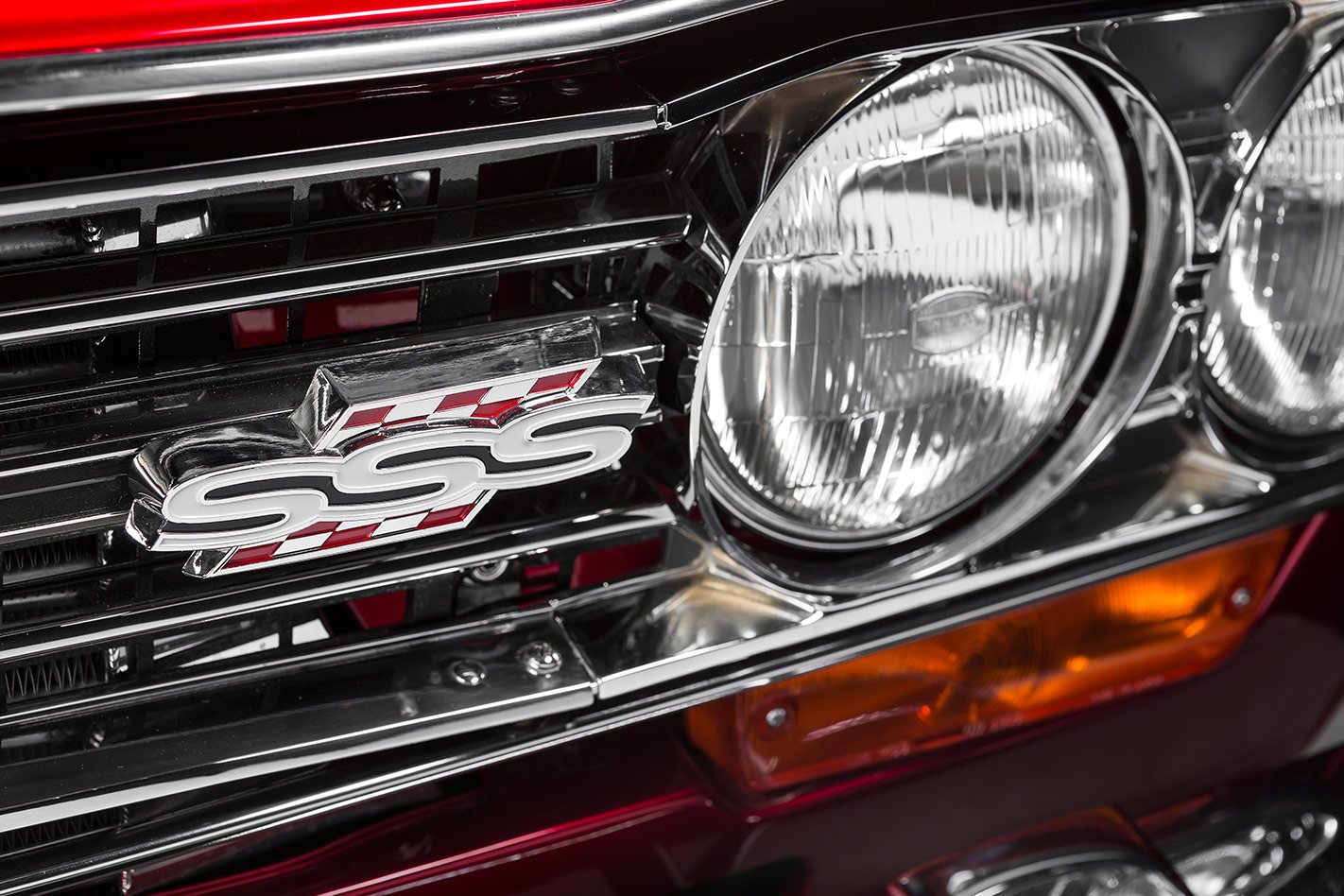 During those years, there were many hours of cutting, grinding and hand-shaping raw metal, followed by lots and lots of welding and yet even more grinding to eliminate the tin worm.

The Orange-based Zelukovics are well known for their panel and paint skills, which are both strikingly showcased in SIRDAT’s arrow-straight panelwork and incredible Glasurit candy paint. The colour is called Rodney Red, custom-mixed by painter Ben Zelukovic.

“It might be a small car, but being candy it was a lot of work,” Ben says. 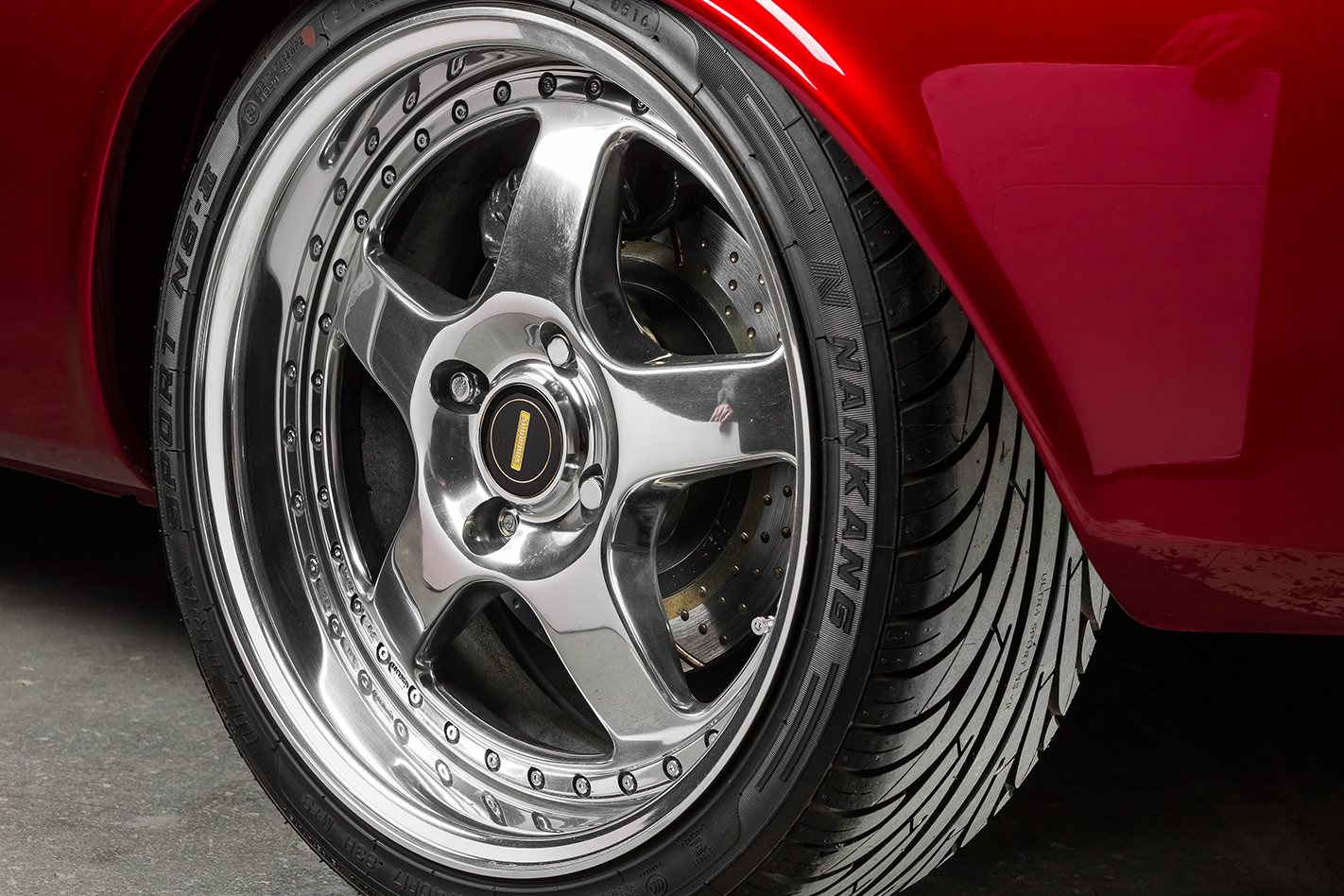 The interior is the result of intense negotiations with Wayne Birkin at Street Trim in Orange.

“I wanted to do black inserts; Wayne said no,” explains Todd. “But I got my way and Wayne loves the black. Then he said no to my Recaros. ‘Too big for the car,’ he said, preferring the Lotus seats he had stashed away. I’m glad I lost that battle, as the seats look beautiful.”

The seats and door trims are upholstered in genuine Connolly Leather, which took three months to come out from England. 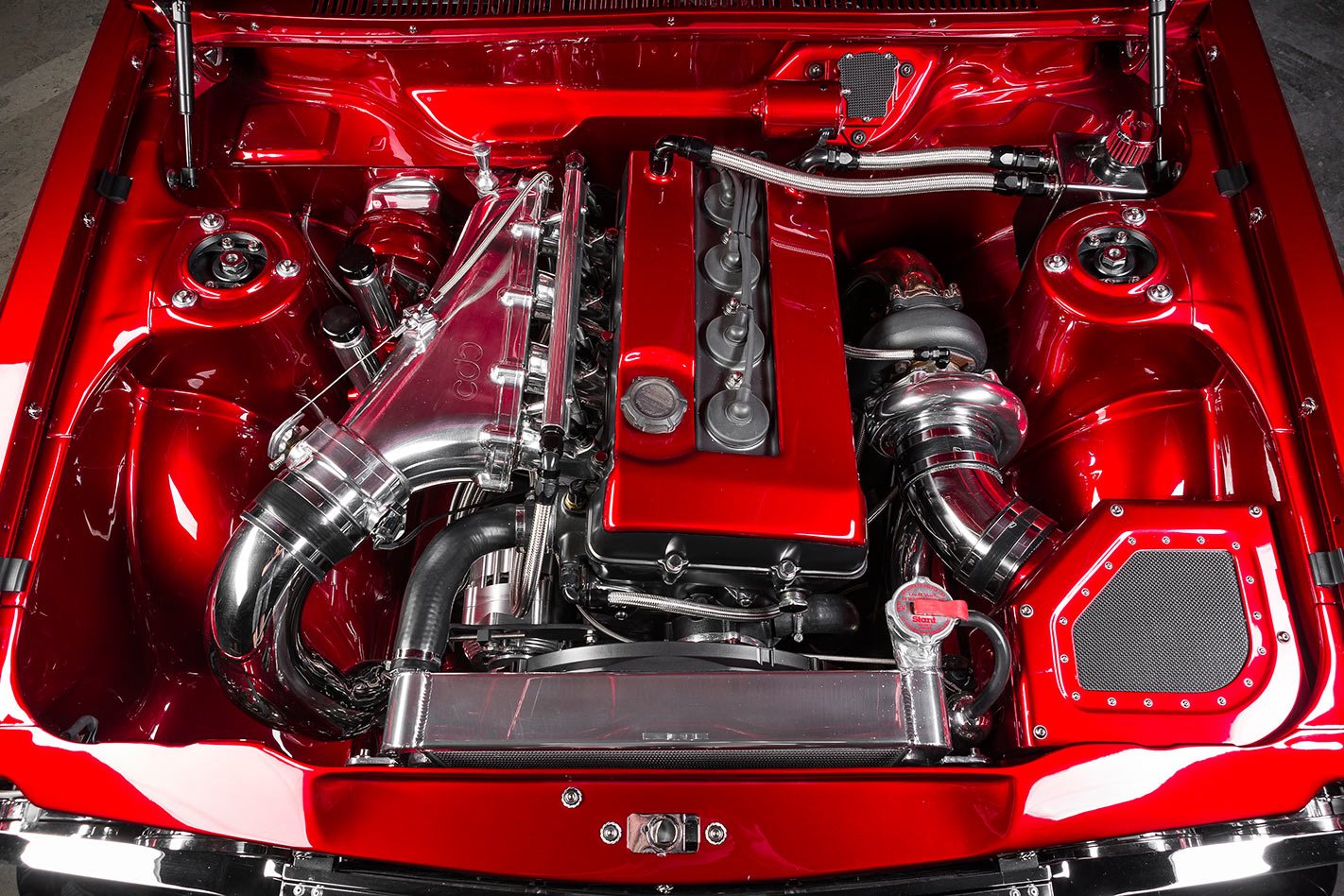 6Boost made the custom manifold to suit the Garrett GTX3582R turbo. Todd tells us they’re expensive, but nobody ever breaks them. “The mirror-polished, billet CNC intake is also pretty special,” he says. “CPC did a run of four, which sold straight away. Aaron Fitzpatrick bought one of them at the same time I did, and I don’t think Ariel at CPC has made any more since”

“It’s the same leather used in Ferraris,” Todd says. “I gave Wayne a full trim set, he gave everything back, preferring to hand-form metal panels, which he covered in leather.” 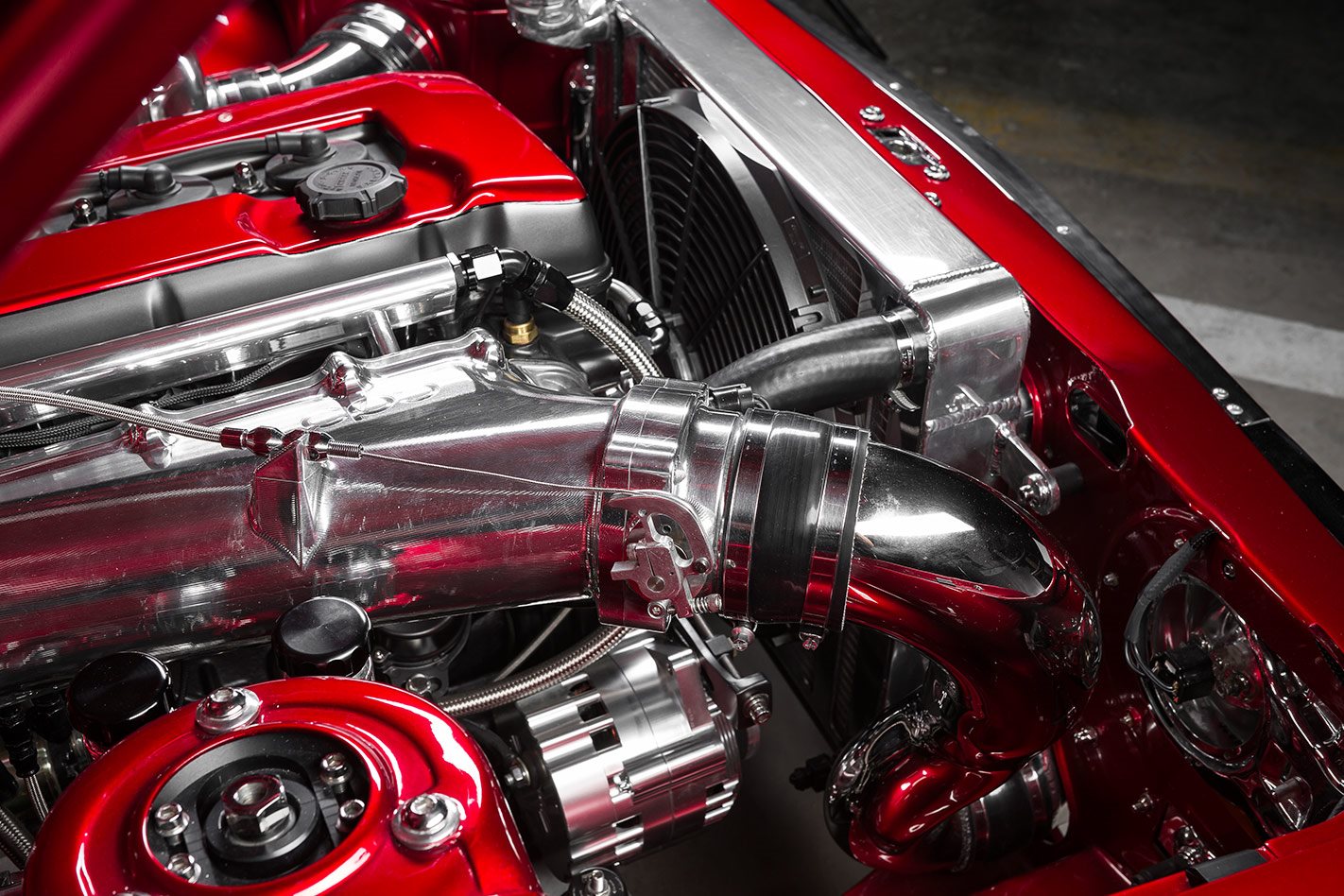 While its looks stunning, SIRDAT is not just all show; under the bonnet is a stove-hot FJ20 that’s been punched out to 2.2 litres. Built by PMC Race Engines, it sports plenty of goodies: CPC billet intake, 70mm throttlebody, CP pistons, and Spool crank, rods and valve springs. There’s also a custom sump by Clayton’s Creations, plus twin Bosch 044 pumps, Bosch 2000 injectors, four AEM coils and a big-arse Garrett GTX3582R turbo With E85 in the tank and only a run-in tune in the Haltech Elite 1500 ECU, the mighty four-pot still managed to twist the dial on the Mick’s Motorsport dyno all the way to 515hp at 23psi!

Andrew Lynch’s metal fabrication skills were called upon for the intercooler, intercooler plumbing, airbox, catch cans, radiator, stainless exhaust and gearbox crossmember – he even made the new dash. 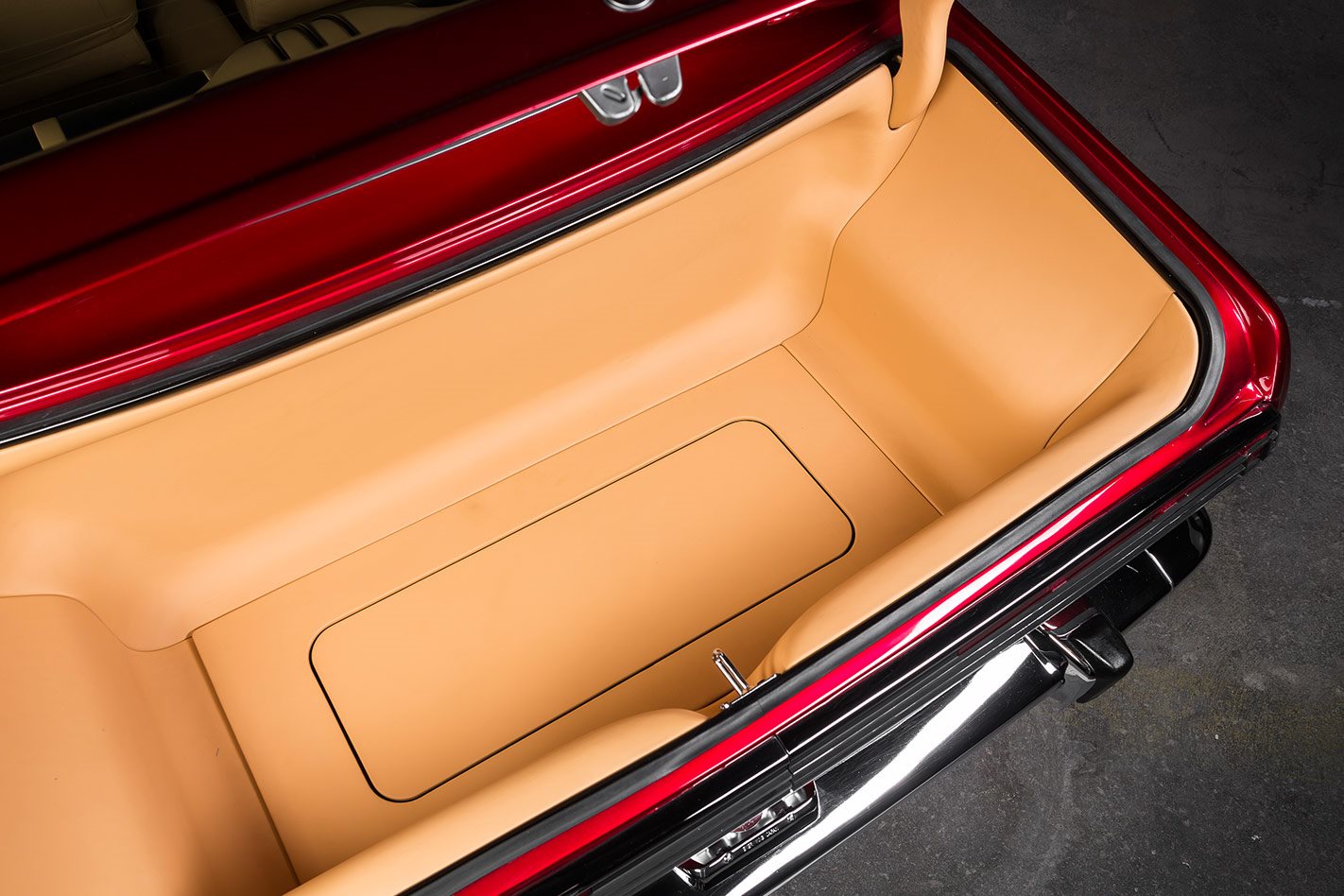 Todd’s preference for manual cog selection presented an unusual problem. The Billet Specialties brake and accelerator pedals connect to custom-made hand controls on account of Todd being wheelchair-bound, which doesn’t leave him a whole lot of limbs left over for shiftin’ gears. The solution: a full-manual, reverse-pattern C4 auto outfitted with a Powertrain Control Solutions (PCS) paddle-shift set-up.

A Dellow bellhousing mates the Nissan four to the FoMoCo C4, while Stewart Wilkins Motorsport built the bulletproof IRS rear end. It uses an R200 LSD diff from a twin-turbo 300ZX, complete with Kaaz centre, which works with Porsche Turbo CVs and billet driveshafts by Mark Axisa. 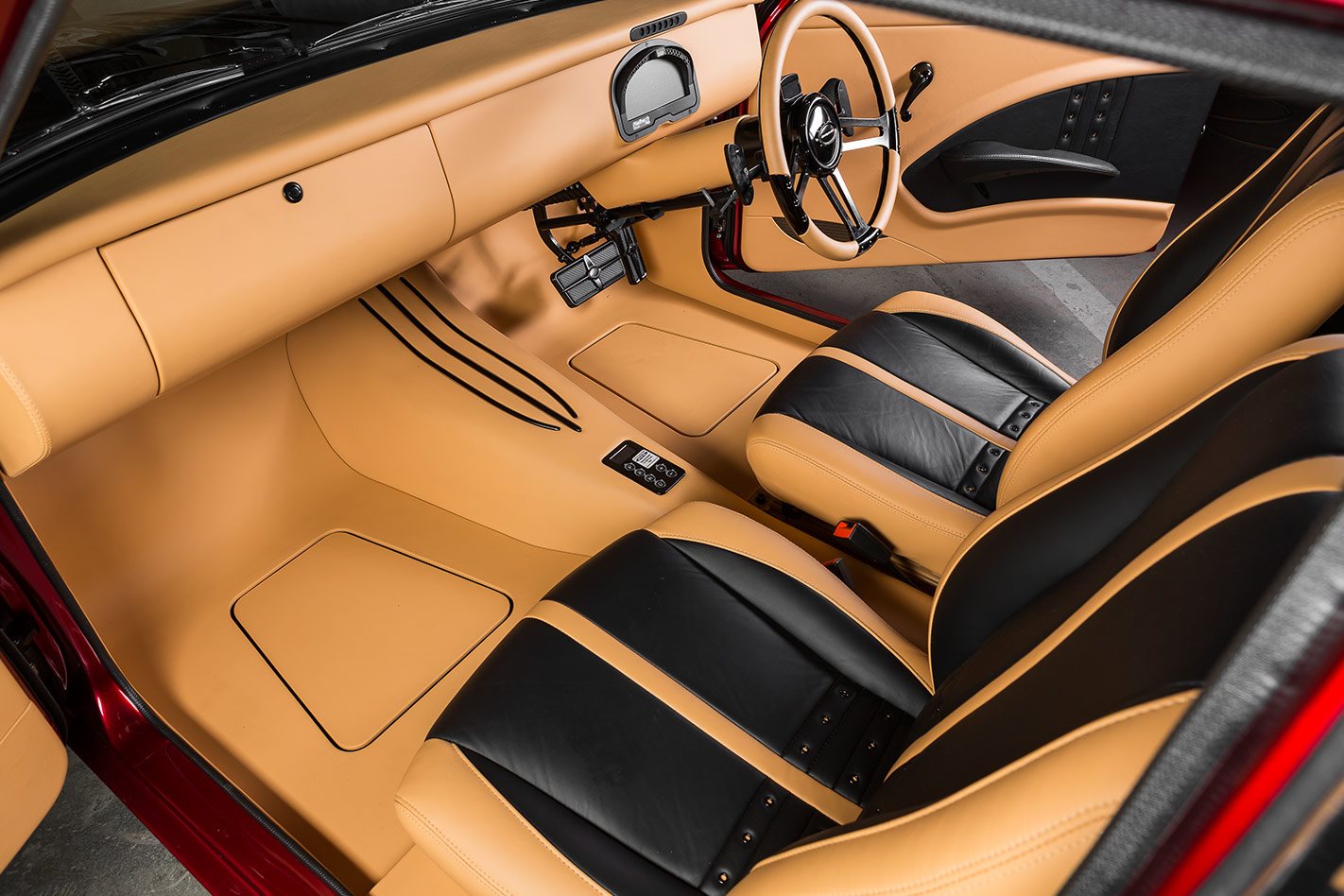 “I’ve never heard of anyone breaking one of these set-ups,” Todd says confidently, “not even in Mark’s burnout/race/street car, which pumps out 800hp.”

These 1600 SSS coupes were never sold in Australia, and are even quite rare in Japan. 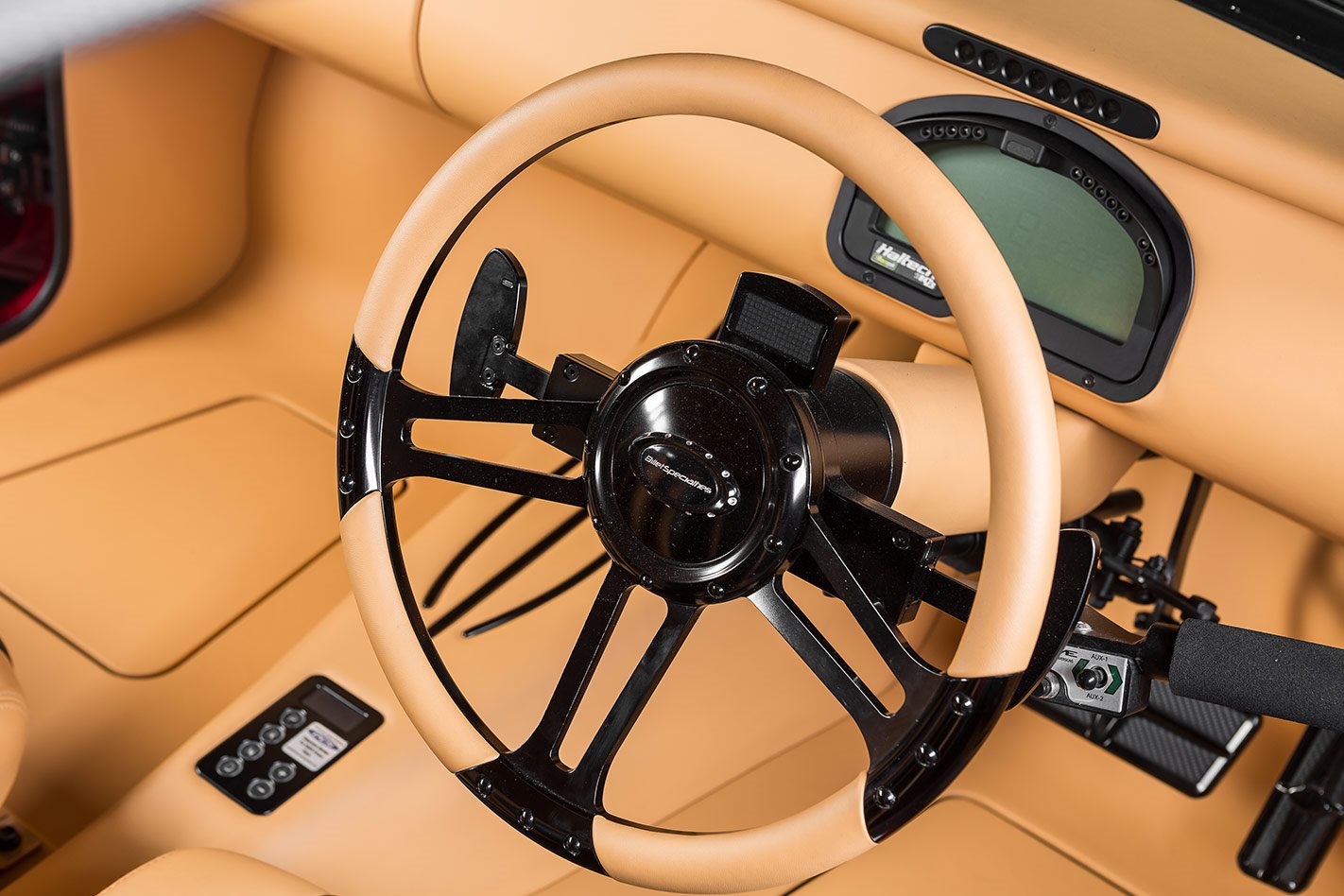 “When I bought it, I thought there was only a few in the country,” Todd says. “But you never know what people have in the shed. I’m now thinking there might be as many as 30.”

The model’s rarity made sourcing parts a nightmare – especially the glass, which is all one-off due to the 20mm-lower roofline.

“Luckily, I found this Japan-based Aussie bloke who specialises in Datsun parts,” Todd says. “He tracked down good driver’s-side door glass and a rear-quarter window for me. Mad Dat and eBay were both helpful; however, I got the bulk of my parts through Datsport.” 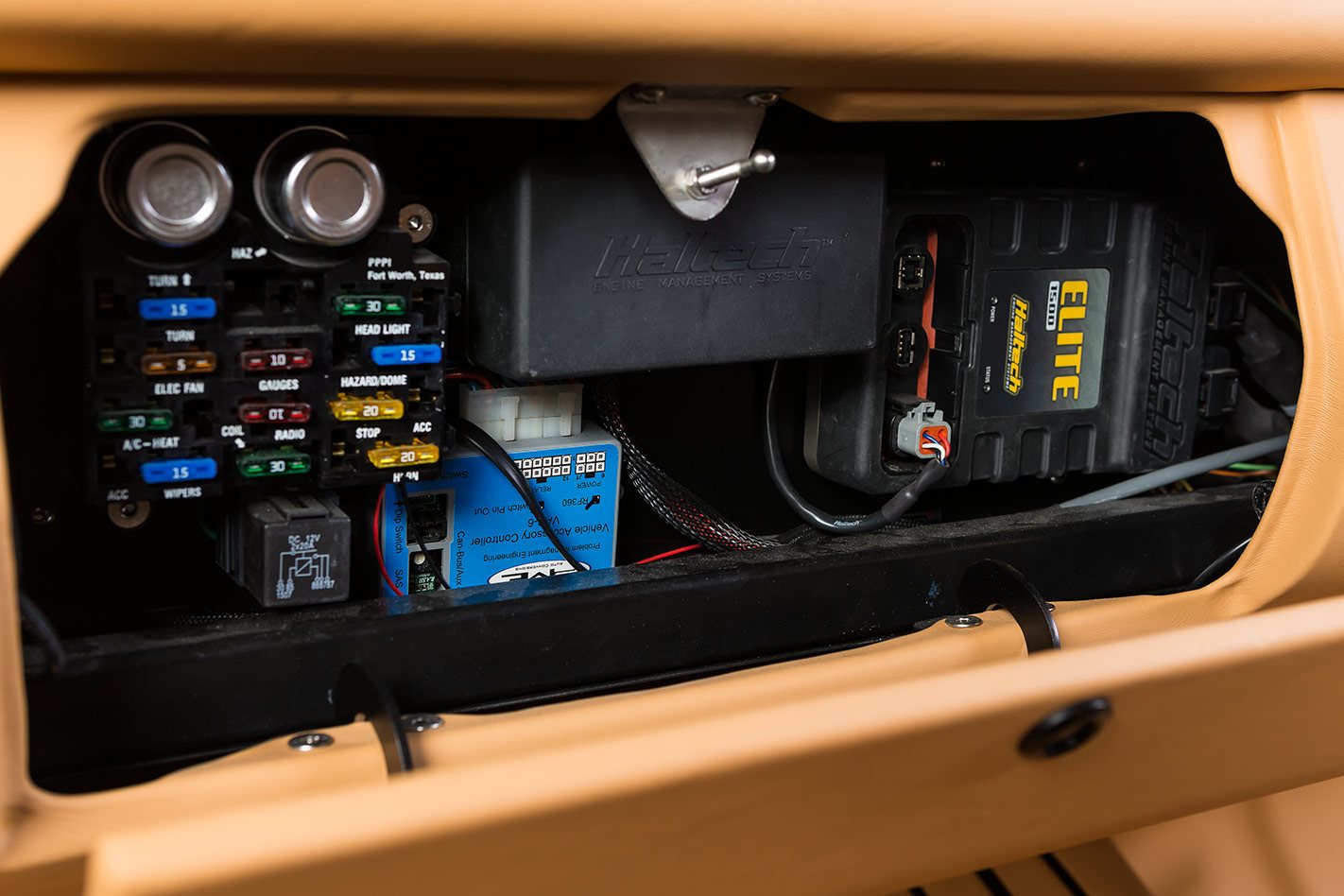 SIRDAT may have been a long time in the build, but the results speak for themselves. On its first outing at Summernats 30, the coupe collected a Top 20 plate, along with Top Retrotech and Top Custom Interior. Since then, this stunning SSS coupe has won a string of major awards, including Neatest Engine Bay, People’s Choice (twice), Best Paint, Top Undercarriage, Top Interior, Top Coupe, plus Best In Show awards at both Capital Jam and the Datsun Nationals.

SIRDAT is most certainly an upper-class act.

A horrific traffic accident landed Todd in hospital in February 1999. When he was discharged, seven months later, it was in the knowledge that he’d be wheelchair-bound for the rest of his life. Doctors also told Todd he’d never drive again.

After a few laps around the local housing estate, Craig commented: “I think you’ve got this, mate.” With that, it was out onto the Great Western Highway, and off into town to chuck a few ‘toughies’.

For SIRDAT, Todd started with a commercially available hand-control kit, but it just didn’t match the quality of the rest of the build. In the end, Ben Zelukovic pretty much made most of the current set-up from scratch. It’s way neater, while remaining very functional. 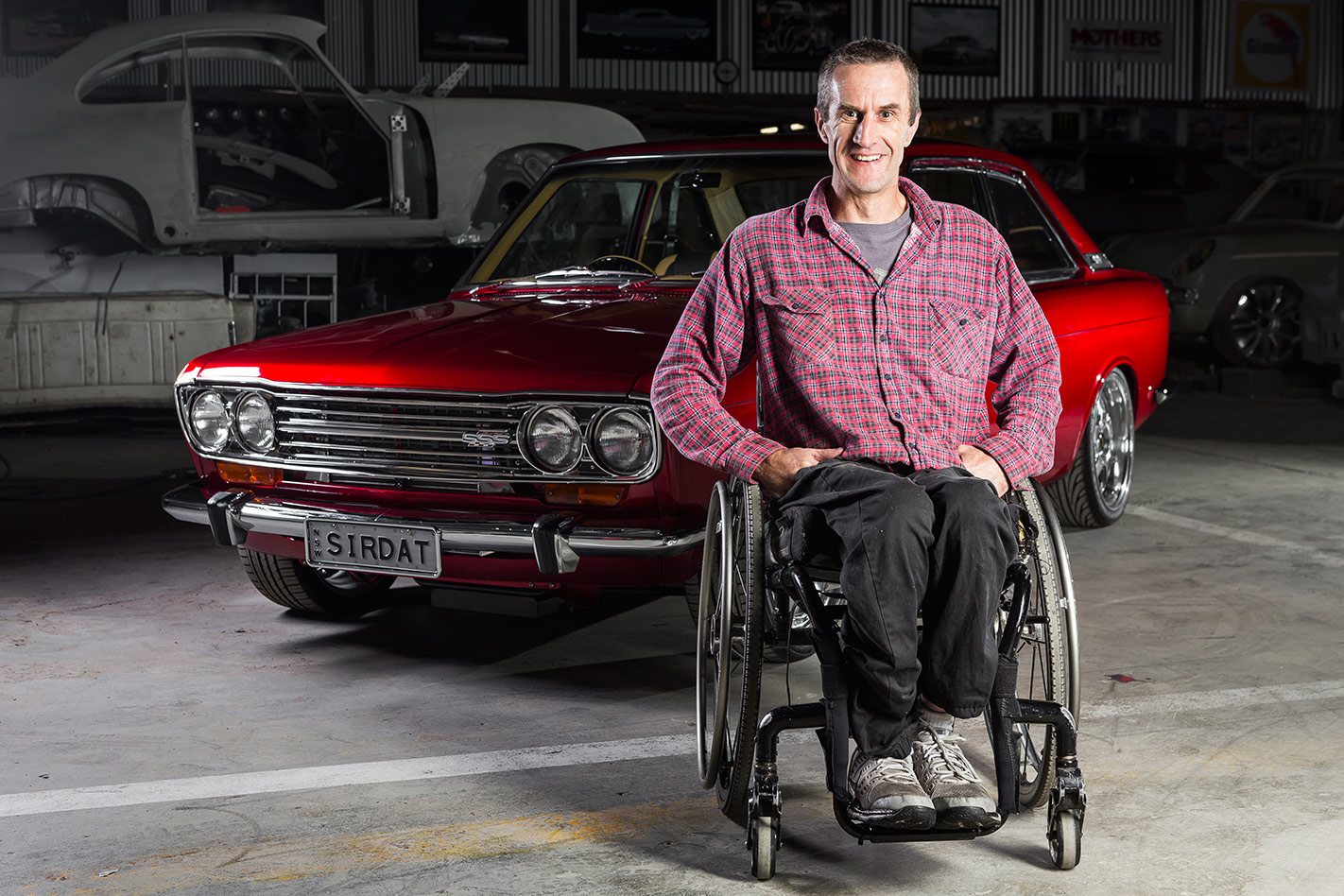 1. After being told he would never drive again, Todd sold off his existing Datsun. But after determining he could master the makeshift hand controls his brother Craig fashioned, he went out and bought another Datto the next day. Then, in early 2001, he set about importing this rare SSS coupe. From all this, you might assume Todd’s a one-eyed Datsun loyalist, but the truth is he grew up on a staple diet of Street Machine V8 goodness and wouldn’t mind adding a 350 Chev-powered LC/LJ Torana to the Bulkeley fleet. 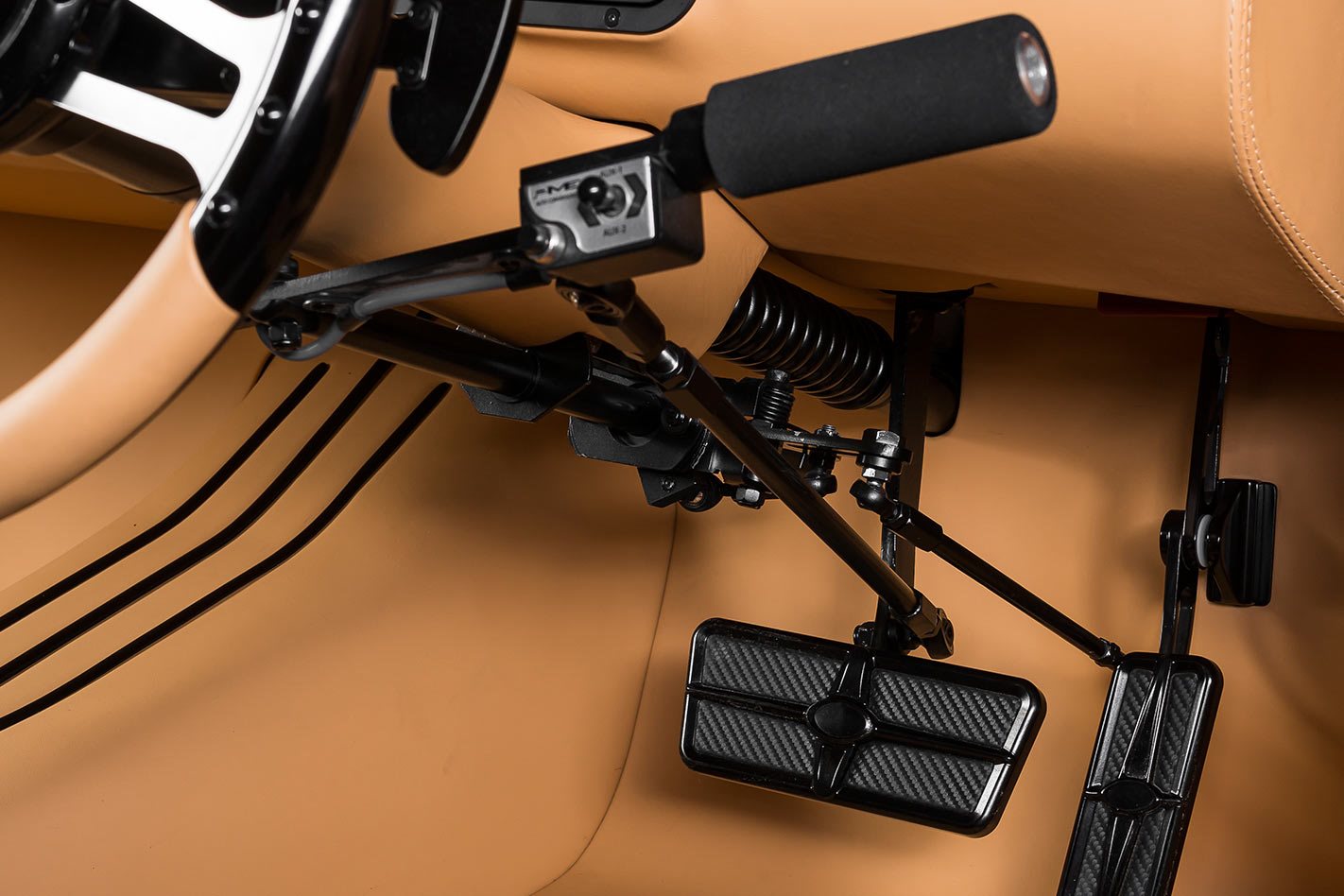 2. Todd imported the steering wheel-mounted PCS paddle-shift set-up out of the US. It communicates wirelessly with the receiver module, which also interfaces with the touch-button controller in the centre console. The small screen on the steering column shows what gear is selected, while the joystick on the hand-control lever operates the headlight high/low, wipers and transbrake. SIRDAT is fully engineered, including the driveline, suspension, brakes, engine and modified hand controls. 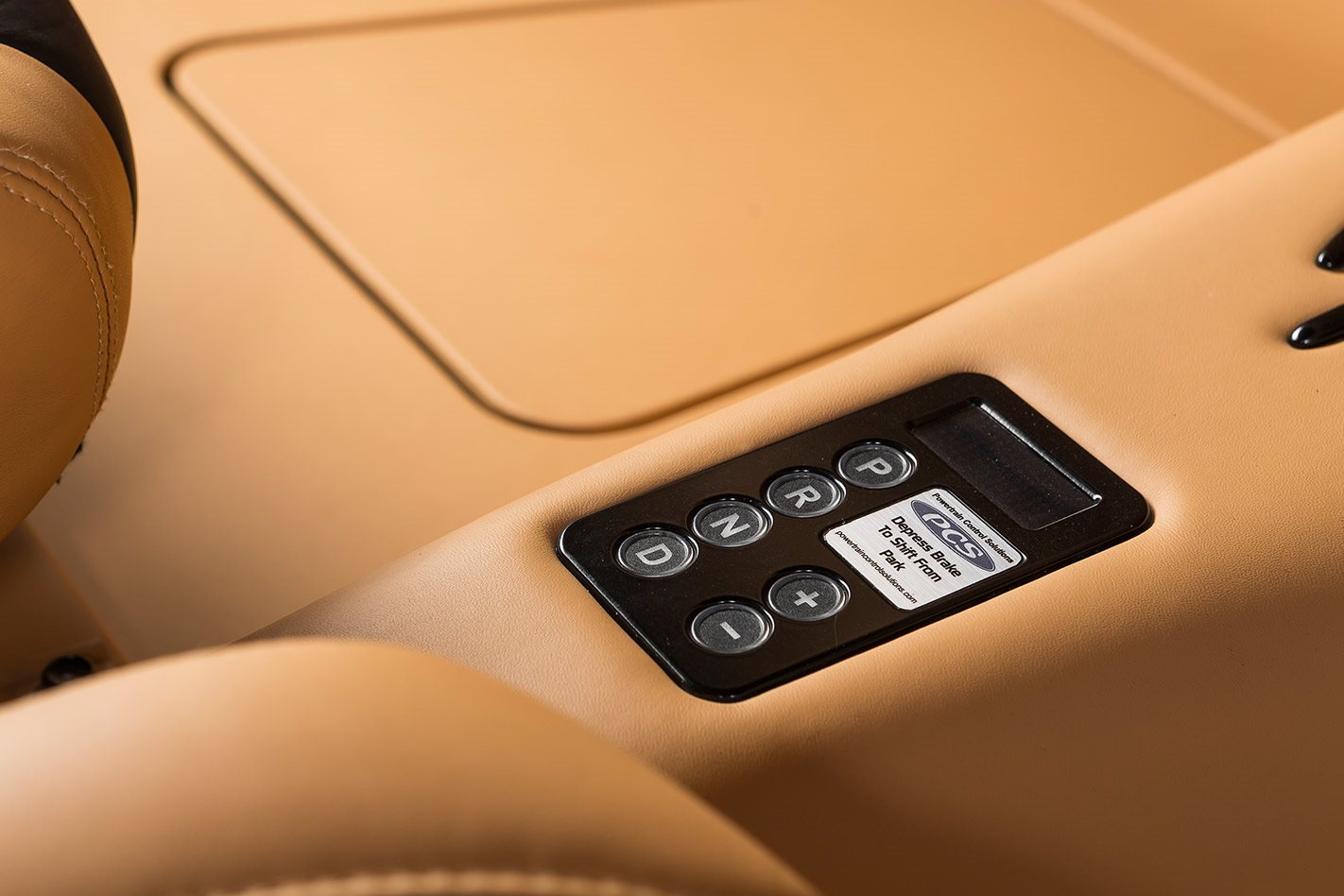 3. This touch-button control panel works in conjunction with the steering wheel-mounted paddles for the fully manualised Ford C4 three-speed 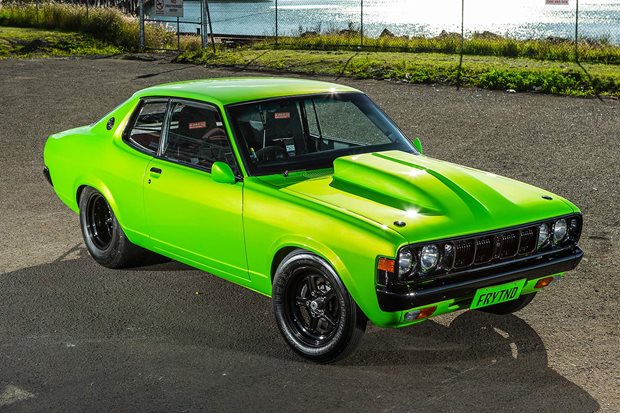 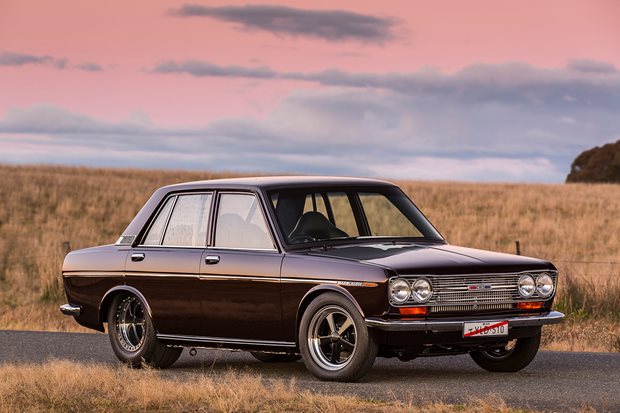 Aaron Fitzpatrick is back with another mind-blowing Datsun 1600 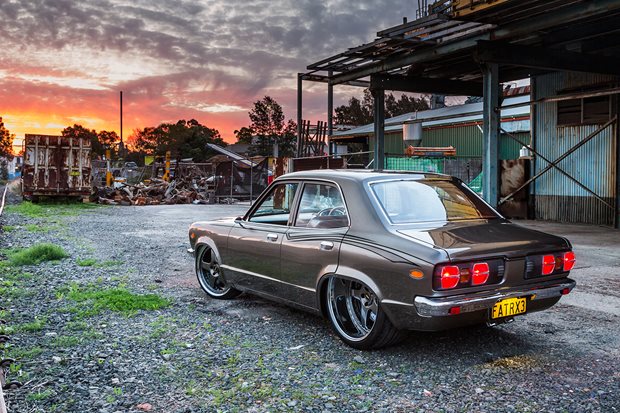