THIS ex-Howard Astill Compact Fairlane has been high on Gary Reid’s wishlist ever since he was a young bloke with big dreams. So imagine his excitement when he took ownership of it at Summernats 20 in 2007.

“Not long after buying the Fairlane I was driving it to breakfast one Sunday morning with my wife Amanda and daughter Analise,” Gary says. “I had a huge grin on my face and Amanda asked me: ‘What’s that about?’

“I replied: ‘When I was 16 I spotted this car on the cover of Street Machine and fell in love. I swore one day I would own it. It’s been 16 years and now we have it. I couldn’t be happier.’”

Gary headed back to Summernats the following year to show off his prized acquisition. Unfortunately, there it got scratched right down one side from tip to tail. To this day nobody is sure how it happened.

“The car was very well built and had survived quite well. It was still in very good condition,” Gary says. “If it hadn’t got scratched at Summernats, it would probably still be purple sitting in my garage.”

With no chance of matching the colour, the Fairlane was shipped off to Trevor Davis for a full respray. Then disaster number two struck. A fuel-injector O-ring let go in Gary’s recently finished Orion Silver ’34 three-window, engulfing it in flames. It was so severely damaged the insurance company wrote it off.

“I was gutted,” Gary says. “I’d put so much time and effort into the rod, I knew I couldn’t do it over again. It was at this point that I decided to go a bit further with the Fairlane and give it a full rebuild.”

Here’s why this Fairlane has won so many Top Engineered awards. Highlights include the four-link rear with Panhard bar. Up front there’s fabricated upper and lower control arms, rack-and-pinion steering and coil-overs all ’round

At the same time, Gary and the family were relocating from Canberra to the Gold Coast. His business, Showtime FMX, had just taken over the stunt show at Movie World, and they also had stunt commitments to V8 Supercars. With all that going on, there was precious little time to oversee the Compact’s rebuild.

Work commitments forced Gary to turn to good mate Aaron and Aaron’s old man Fitzy at Fitzpatrick Speedworks to take charge of the full rebuild. Aaron was keen to step up to the plate and get the job done. 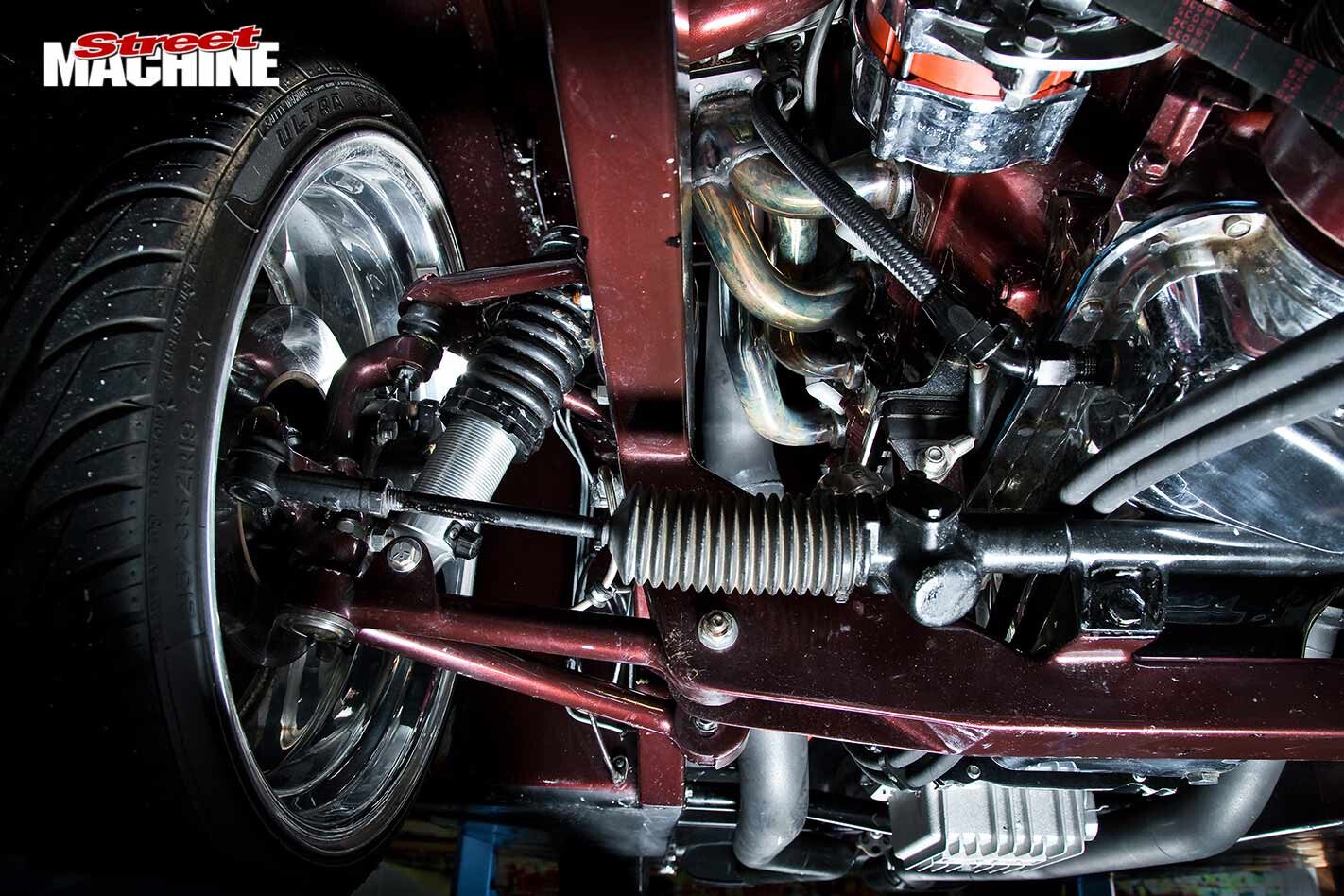 After a bit of tweaking and messing about, the Fairlane rides 100mm lower, yet gets full-bump and full-lock without rubbing a tyre

“Aaron and I have been mates for 20 years,” Gary says. “I was best man at his wedding. I knew what Aaron was capable of and had no hesitation leaving the build completely in his hands. My only brief was that it needed to spin the tyres and have deep-dish wheels on the back.”

“The car was already at Trevor’s getting painted,” Aaron recalls. “From that point on, Gary never knew what the car would look like until we unveiled the finished streeter to him, at the Kings Car Club.”

The diminutive size of the GT25 Garrett turbochargers means that the boost comes on very early, giving the EB-spec, EFI 5.0-litre plenty of low-down torque. This makes SHOTIME a great cruise machine

Gary didn’t even know what colour it was. When he dropped it off at Trevor’s he had an idea of the shade he wanted, but Trevor and Aaron got together and came up with a completely custom hue instead – which Gary loves.

When part of your day job is looking after 550hp stunt utes, your daily driver has to have oomph. With this in mind, Fitzpatrick Speedworks tore down the injected EB V8 and prepared it for a pair of baby Garrett turbos.

Fitzpatrick Speedworks was responsible for most of the build, including screwing the engine together and fabricating the turbo set-up

Jake’s Performance cleaned up the heads, tweaked the ports, opened up the factory throttle body and supplied a specially ground cam.

After Aaron finalised the engine package, he set about fabricating the mounts, plumbing the oil system and fashioning the three-inch dump pipes, leaving the rest of the exhaust up to National Capital Automotive.

On Jake’s chassis dyno, the new combo churned out a respectable 350rwhp at 200km/h. Gary loves it; you can potter around in it quite happily, but if you stomp on it the car takes off like a dog shot in the bum – all without losing reliability.

Dual hairdryers and the factory ECU were never going to get along; Aaron tossed it in favour of a Haltech. Same with the four-speed auto – a stout C4, built by Keas Transmissions, now fills the trans tunnel. A tight 2000rpm TCE converter was chosen so that it would come in nice and early – just like the turbos.

Trims By Shaun was given the task of replenishing the interior to match the fresh exterior. Front and rear bench seats (which Gary insisted on keeping so it could carry six) were covered in light tan leather, complete with a 60s-inspired insert

The Diff Doctor lopped a couple of inches off either side of the braced nine-inch, to give the new rear hoops just the right amount of dish. Those 20x10 Intro G-Cube billets on the rear were paired with 18x8 fronts, and all four centres were given the satin-black treatment.

The monster audio system had been pilfered over the years and was yanked. A new, smaller system is on the to-do list

This same paint scheme was carried through to the Fairlane’s underside, with only the driveline and suspension copping a coat of body colour. There was never any temptation to return the undercarriage to its former glory.

“I didn’t want a show car,” Gary declares. “I’m going to do burnouts in it, take it to the beach, drive it to work and just have fun in it. Besides, with the big wheels and raked stance, it looks much tougher sitting down on the ground. I never want to put it up on stands.”

So what was Gary’s reaction to the finished product?

“The colour, the stance – Aaron nailed it,” Gary enthuses. “I’ve got a few other toys in the garage, but this one’s special.”

As for fulfilling the smoky part of the brief, within minutes of laying eyes on the freshly finished Fairlane, Gary was out smashing the tyres down to the canvas. Fitzy recalls: “When we unveiled it at Summernats the following night, they had no bloody tread left on ’em!”

Built as a Street Machine giveaway car, ROCK 4 was Howard Astill’s next showstopper after his XA sedan, ROCK 3 – which was given away the year before. ROCK 4 was one of a series of high-profile ICVs that were built during this period to highlight what was possible within existing guidelines. It featured a fully fabricated chassis, EB Falcon V8 running gear and outlandish (for its day) 17-inch wheels. At Summernats 5 it also snagged Howard his second consecutive Grand Champion award.