CAN you imagine how good it would be if your grandparents had kept their chrome-bumper purchases from the 60s and 70s? For a lucky few, this dream is a reality, and Dan McAuley is among them. “Mum vividly remembers their family going to Adelaide’s John H Ellers Holden in 1968 to buy a brand-new HK Kingswood wagon; a 186S with a three-on-the-tree,” Dan says of his grandparents Bill and Nevis Newbury’s purchase. It was Nevis who most often steered the family truckster, which she promptly named Sadie. “If you mentioned Sadie everyone knew that you were talking about the wagon,” Dan says. 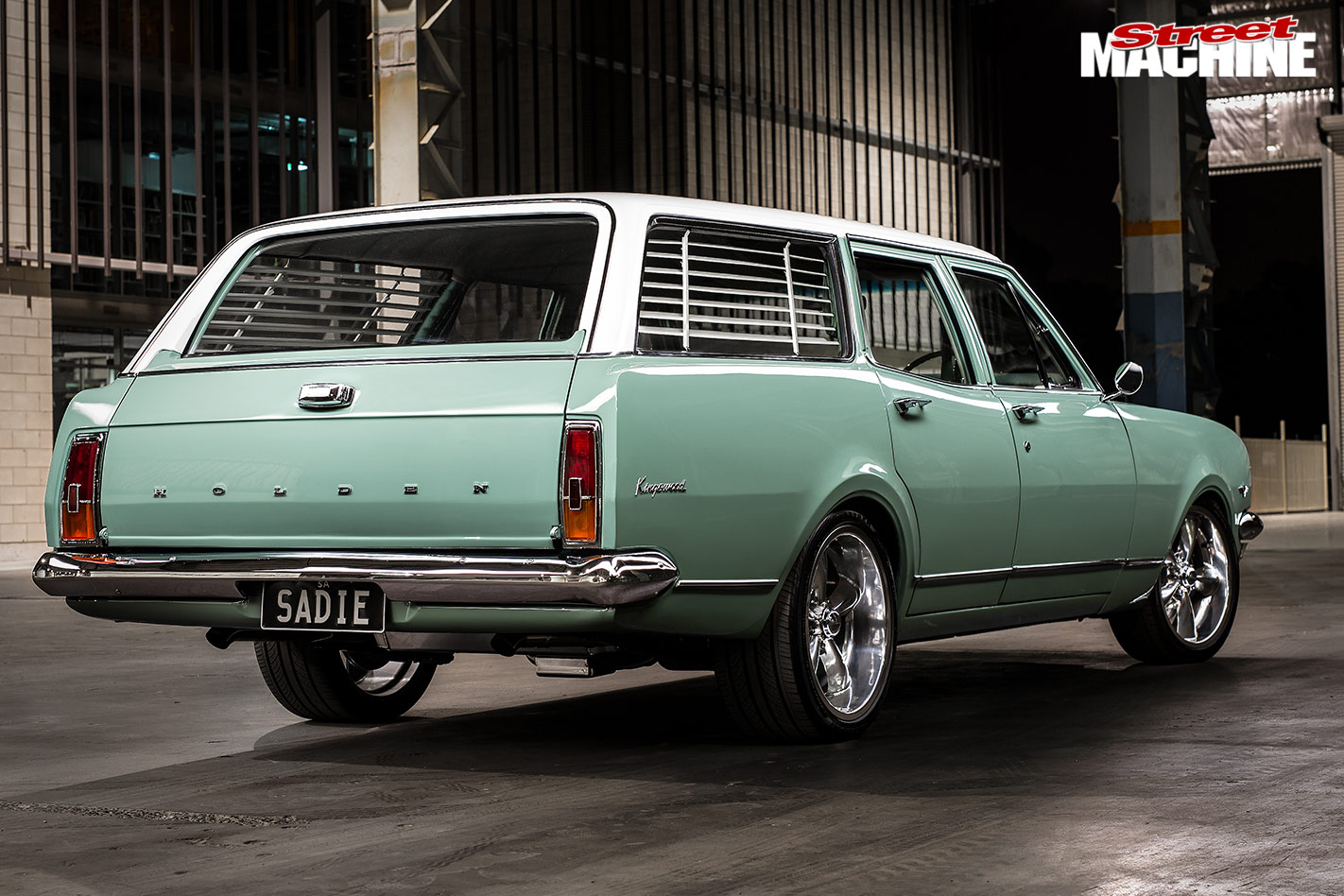 Maintaining the Holden badging across the tailgate speaks volumes to those who grew up with 70s cars. It’s both a visual and tactile experience; did you ever run your hands over chrome badges as a kid? Heaven!

Sadie diligently became a useful hauler shared amongst the family, creating her own history in the process. This included heading to Leigh Creek in remote SA, where the HK became a bush-basher with lifted suspension, bigger tyres and driving lights. Later, she was the victim of a stolen recovery. “Uncle Wayne then took ownership to fix her up, yet it never happened,” Dan explains. “I was after a project and really wanted Sadie, so I pestered him until he finally gave in at Christmas ’06.” 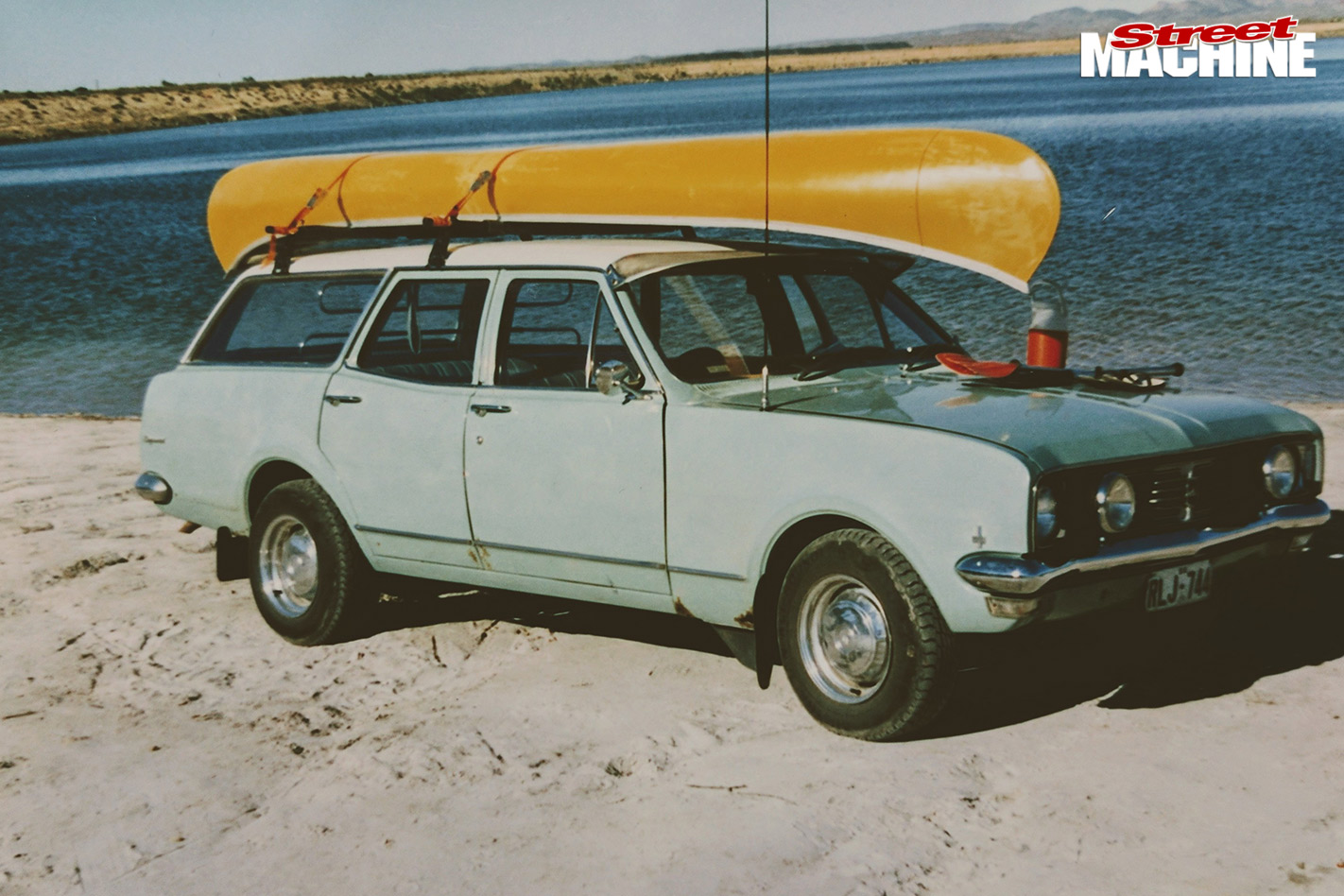 After ingesting a bunch of episodes of Chip Foose’s Overhaulin’ show, Dan had the inspiration he needed. “I love the stock look with modern features and big wheels, like it could’ve rolled off the factory floor like that,” he says. 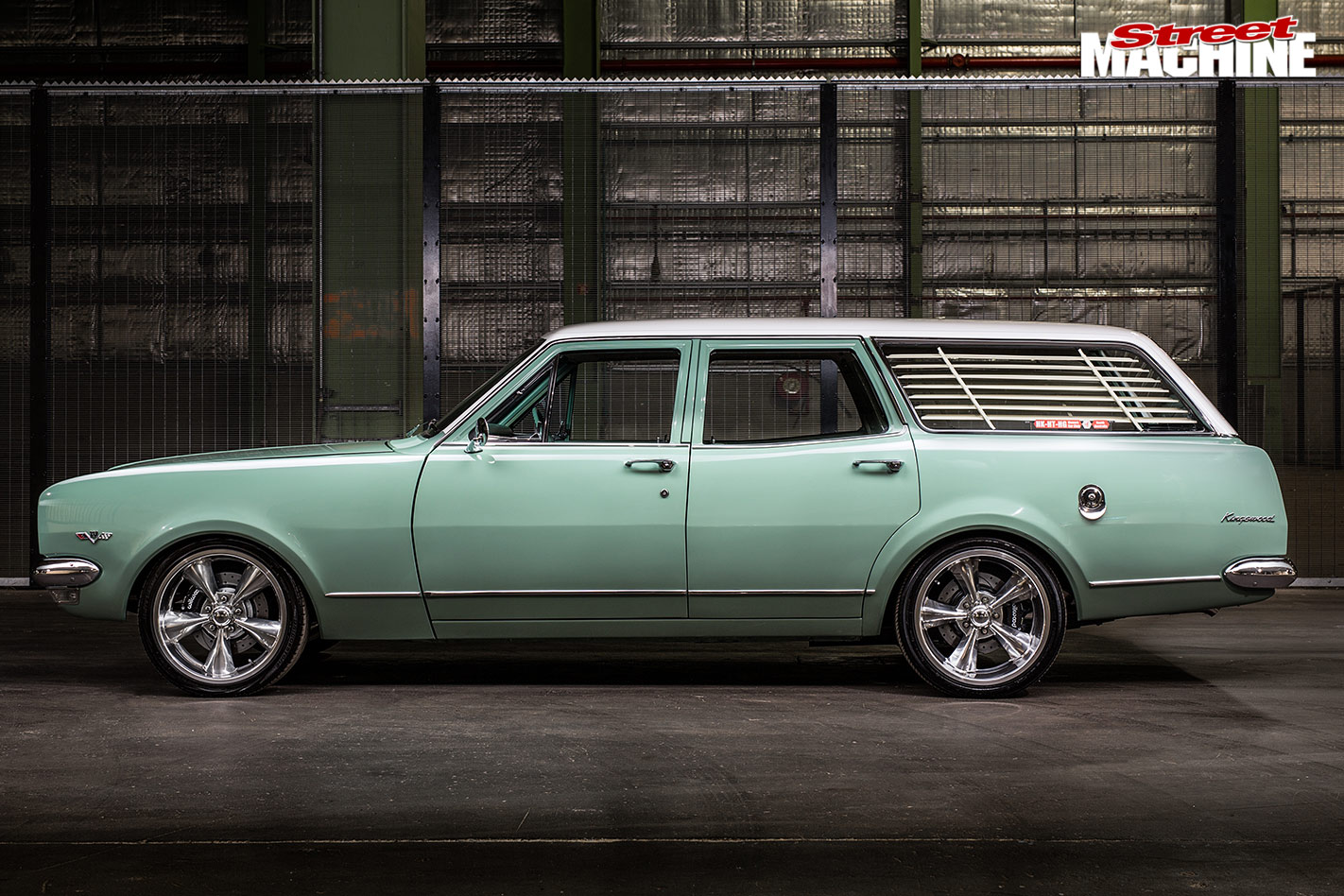 During the build Dan sensibly sourced local specialists to glean relevant info from. His mates in the HK-HT-HG Owners Car Club of SA were a font of knowledge, as was Simon at HKTG Restoration Parts, who also sourced hard-to-get components

While the emotional ties were still there, Dan had to admit the wagon really wasn’t in the best shape after the years of mistreatment. “Let’s just say I needed to fix a few holes in the car. I think Dad and Uncle Wayne had come at it with a cold chisel!” Between tinworm and dents, Dan ended up replacing all of the doors, tailgate, parts of the front and rear guards, and most of the floor. “I think the bonnet and roof were the best bits of the car,” he laughs. 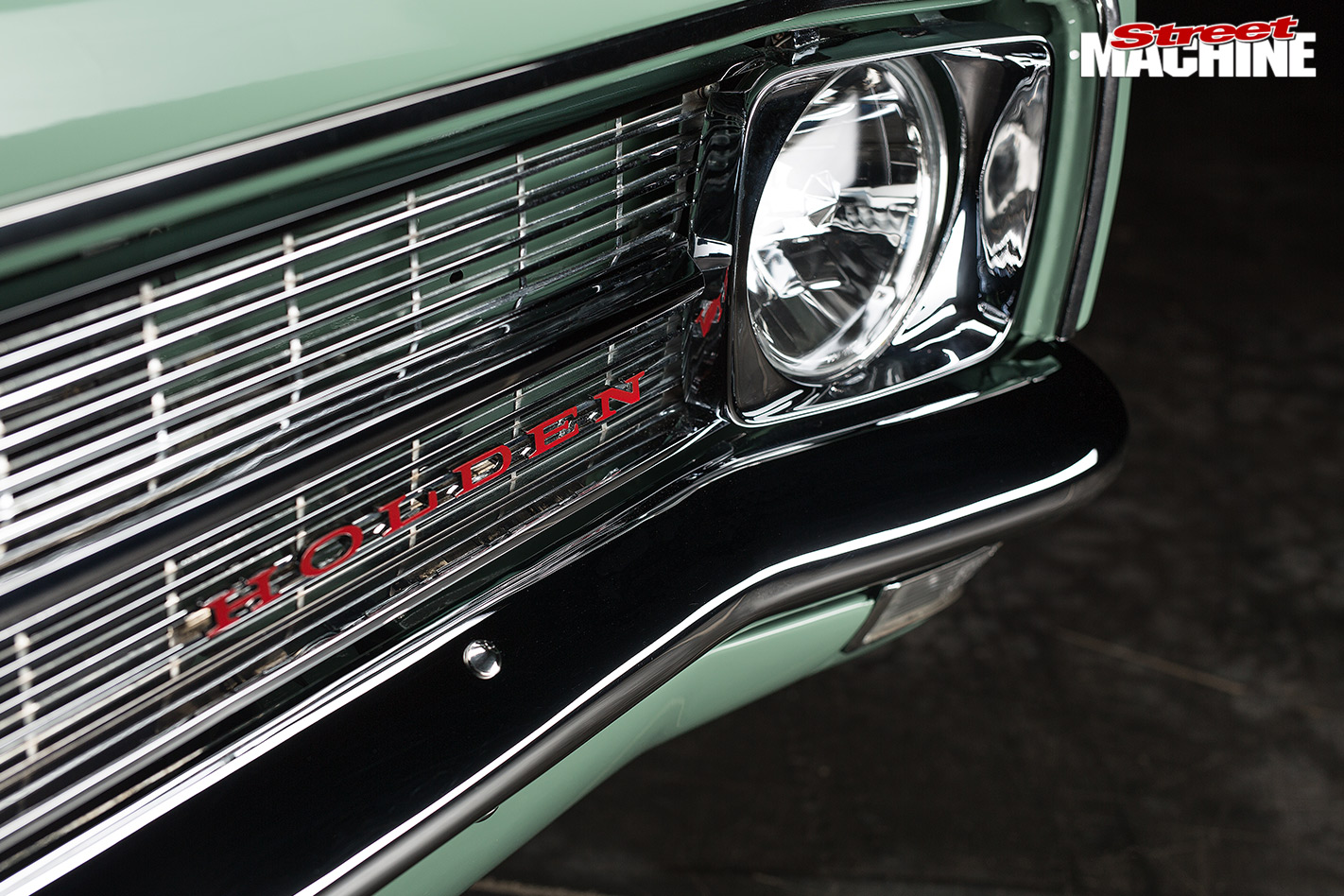 One redeeming feature was that the motor and ’box were long gone, providing a clean slate for what was next. “I wanted a Chev, and as HKs had a V8 option it wasn’t too hard to slot in,” Dan says. “Also the dollar was at 98 cents US, so I bought a crate engine [from the States].” D&J Machine/Tuff Dawg Engines in Arizona bolted together the 383-cube package topped with an 850cfm Quick Fuel Street-Q Series on an Edelbrock RPM Air Gap manifold. Below are ProComp heads, a COMP Cam, and Scat rods and crank. 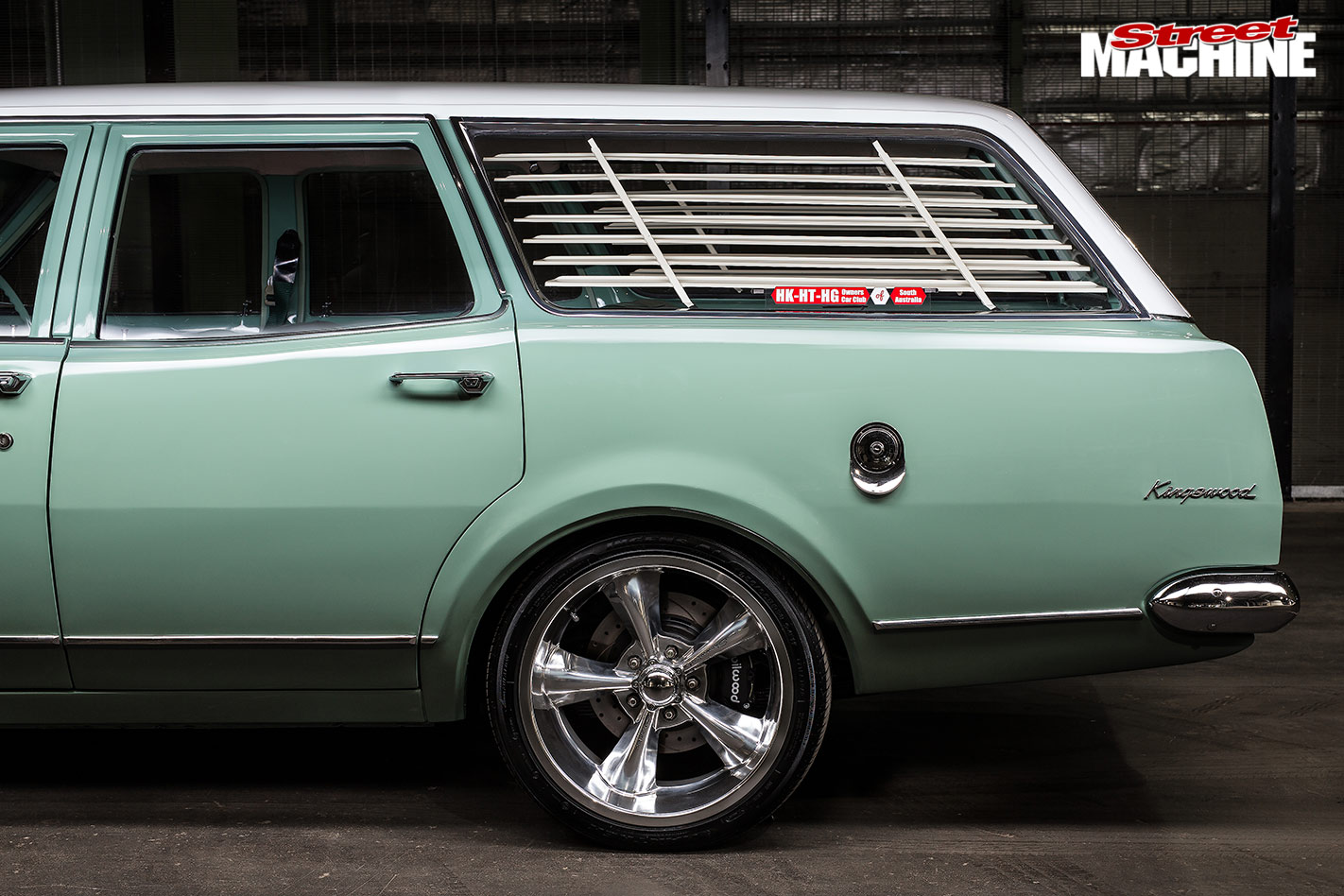 HKs came out with 14in rims, so to fit the whopper 18in Showwheels Streeters Dan machined 8mm from the back of the hub on the front wheels, then added metal inserts to the stud holes to get the clearance right. Inner guard lips have been removed and the guards rolled

“I was really nervous on its first dyno run at Specialty Tuning Marion, as I’d seen horror stories on Facebook of crate engines having huge failures,” Dan says. 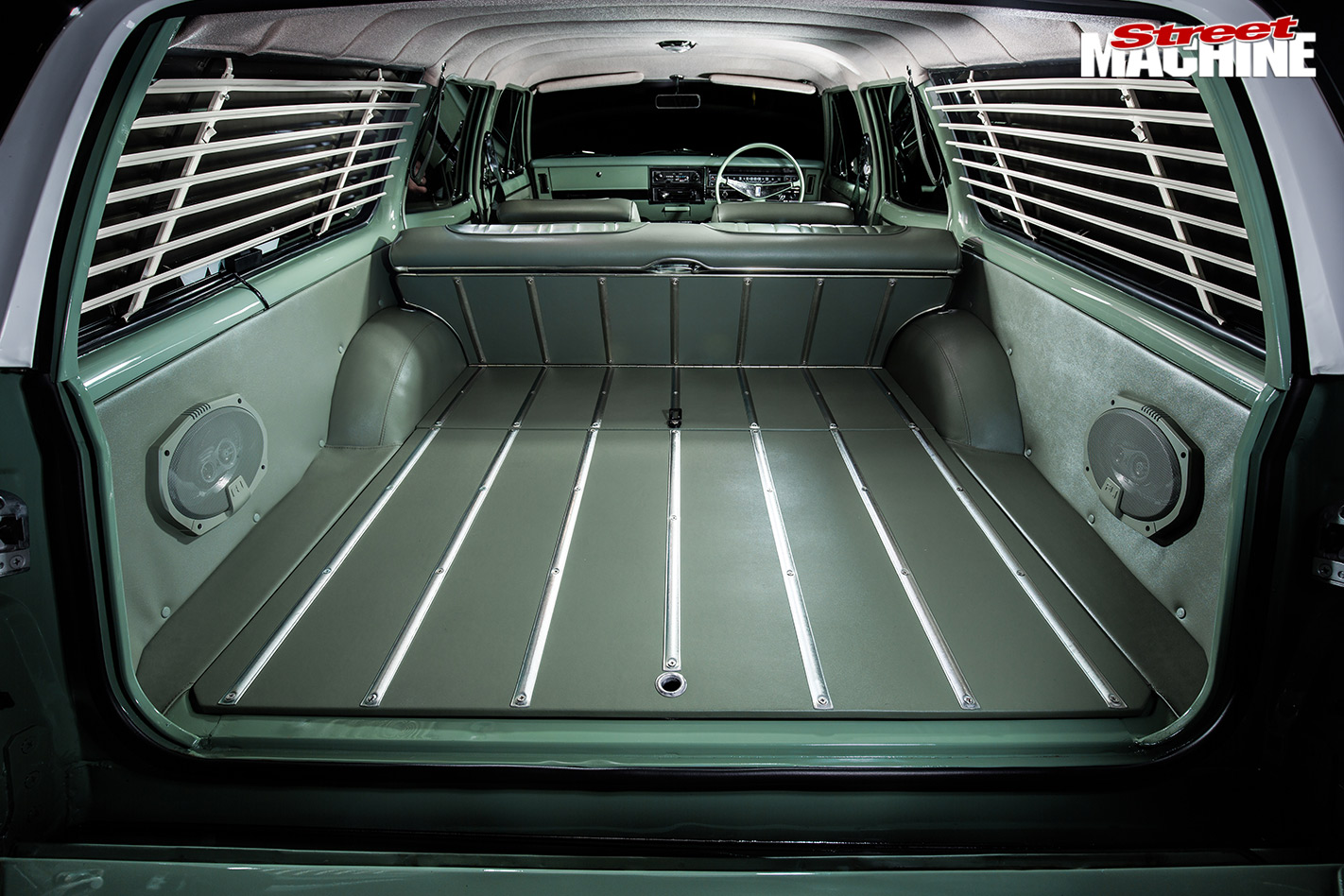 At first glance the rear compartment is all factory, with its original floor rails and white venetians. Only the Sony 6x9 speakers give away the fact that there’s a Sony 10in sub and amp hiding in the spare wheel well

Thankfully, he wasn’t inflicted with that pain, instead getting a respectable 319rwhp and 442lb-ft of torque. Behind is a stage-two TH350 ’box, which had a few initial technical issues, now fixed thanks to Dave at DRW Transmissions. Up the back is an eight-inch diff with Currie 28-spline axles, 3.55:1 gears and a girdle plate, and has been narrowed to fit 18x9 Showwheels under the stock rear guards. 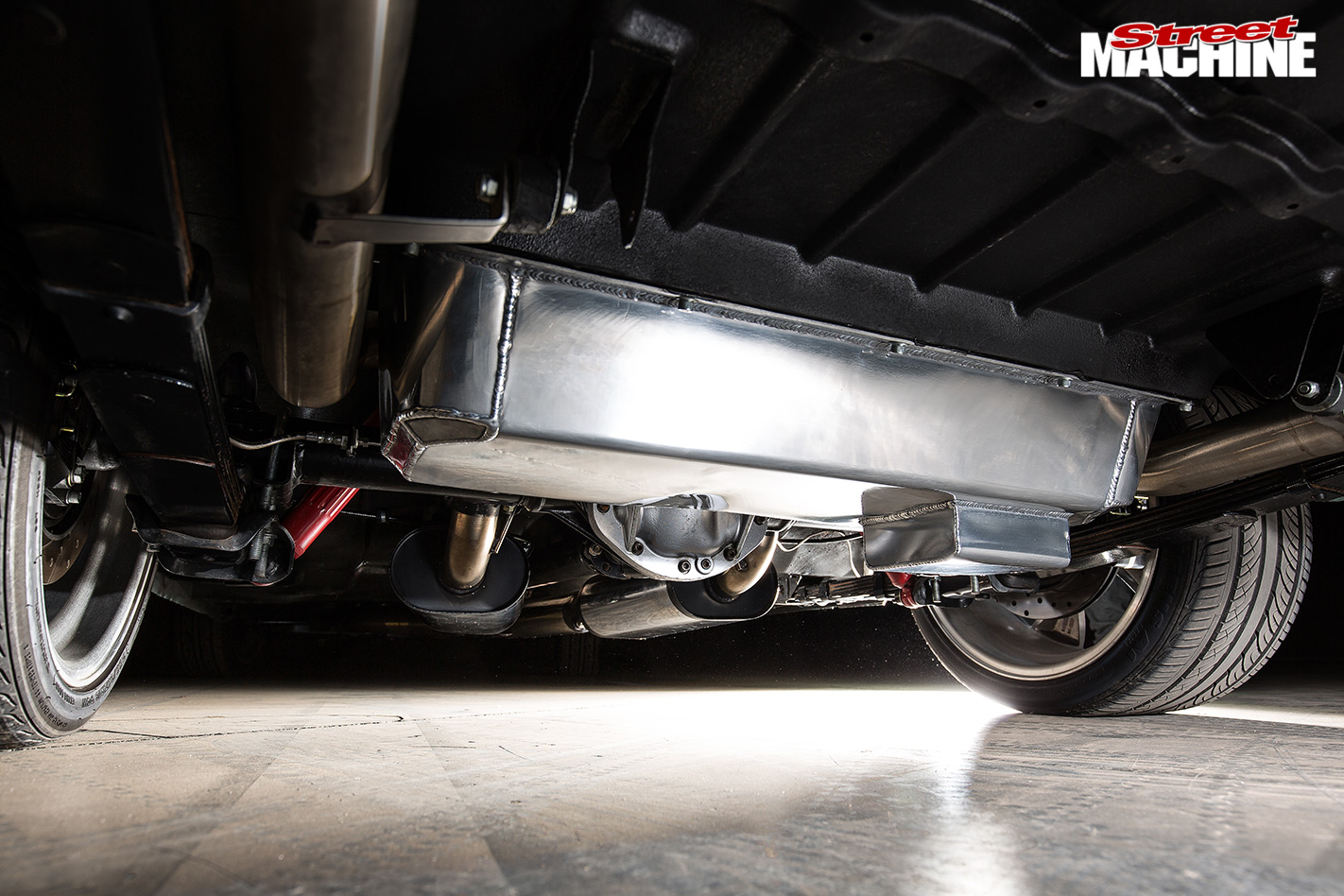 “The custom 70L fuel tank was built by Rob of RMF Fabrications to allow access to the eight-inch diff,” Dan says

Dan’s rounded off the look with a two-and-a-half-inch drop, adding a thicker rear leaf spring to stop axle tramp. Poking their heads out from behind the open spokes are Wilwood 320mm rotors with DynaPro four-piston calipers. 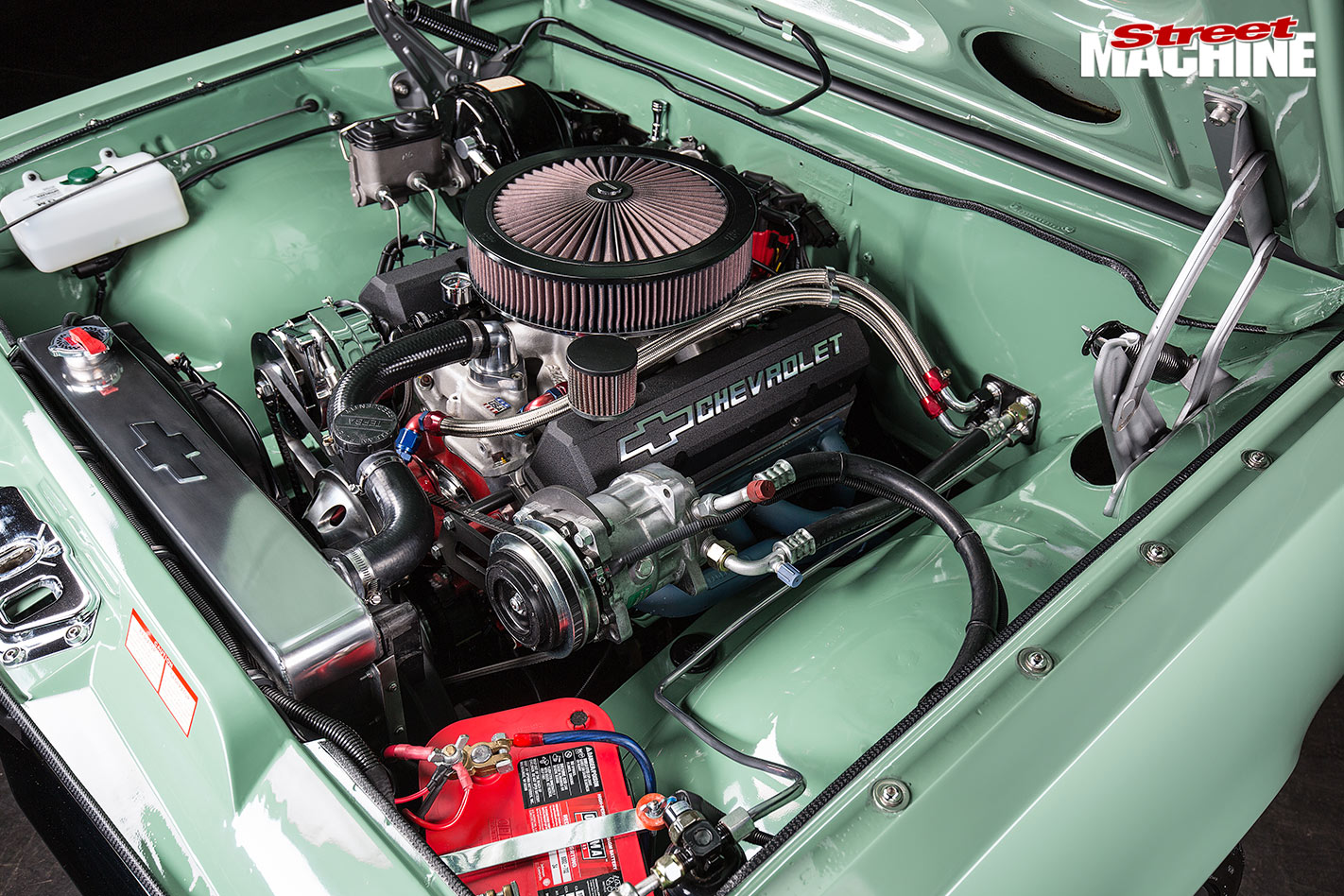 Dan’s opted for a few chromed pieces to contrast with the black rocker covers that crown the small-block, all nestled against the body colour of the ’bay. It’s neat yet functional, with the original wiper fluid bottle and air con, which allowed for the deletion of the large heater box

Outside is the original Pyrmont Green hue, topped with a white roof; a classic colour scheme that works well with the modern touch provided by the wheels. Adam and the team at Southern Classics & Customs laid the paint on, after fixing the defects created by a previous shop – an all-too-common issue. And the pastel green goodness continues within, thanks to Winner Products, who shipped in custom-made vinyl to match the factory grain and colour and swathed the buckets, bench, door trims and rear compartment with it. 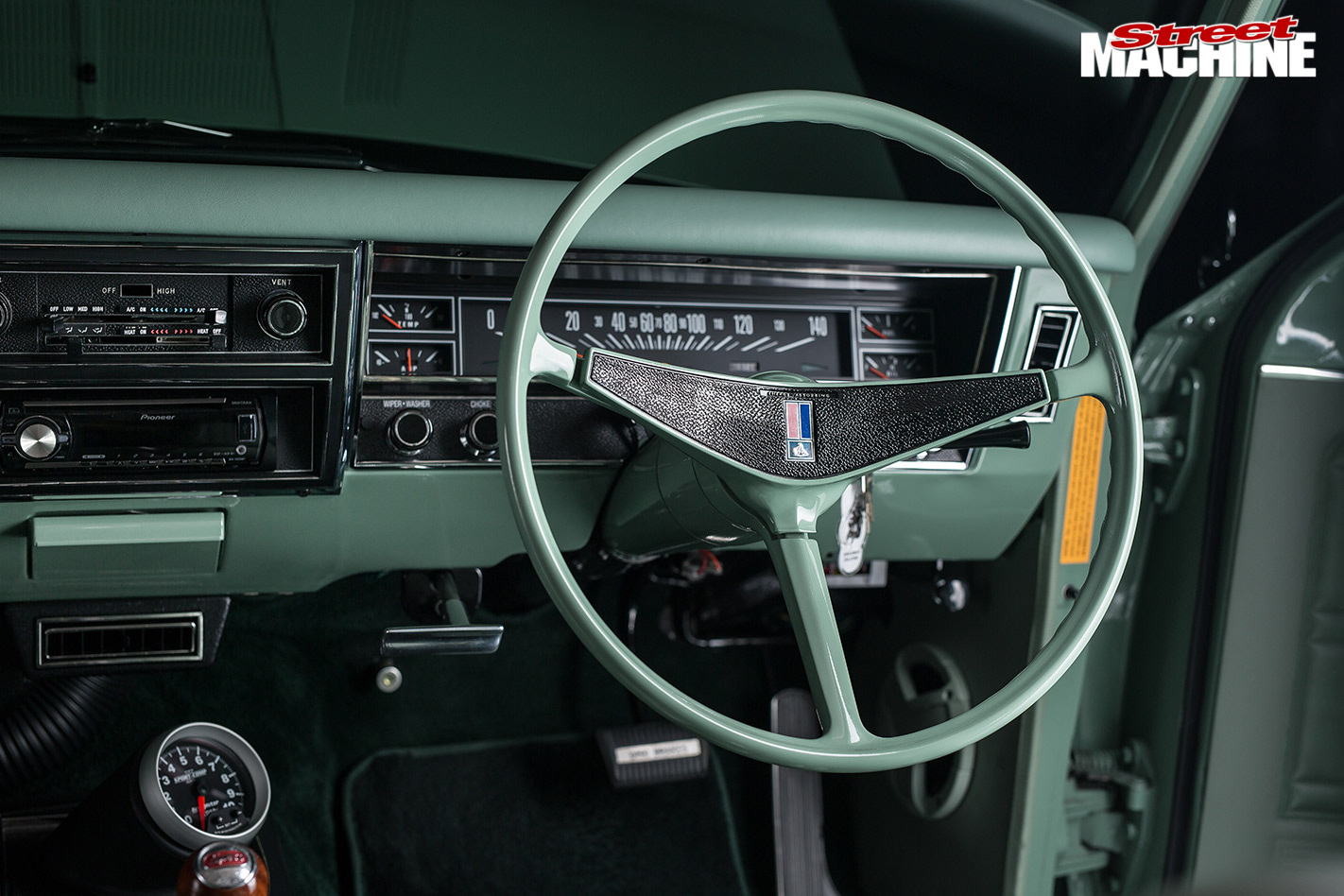 “For me, the car represents a big part of my childhood,” Dan says. “Unfortunately, my grandparents both passed away before I was able to finish the car.” 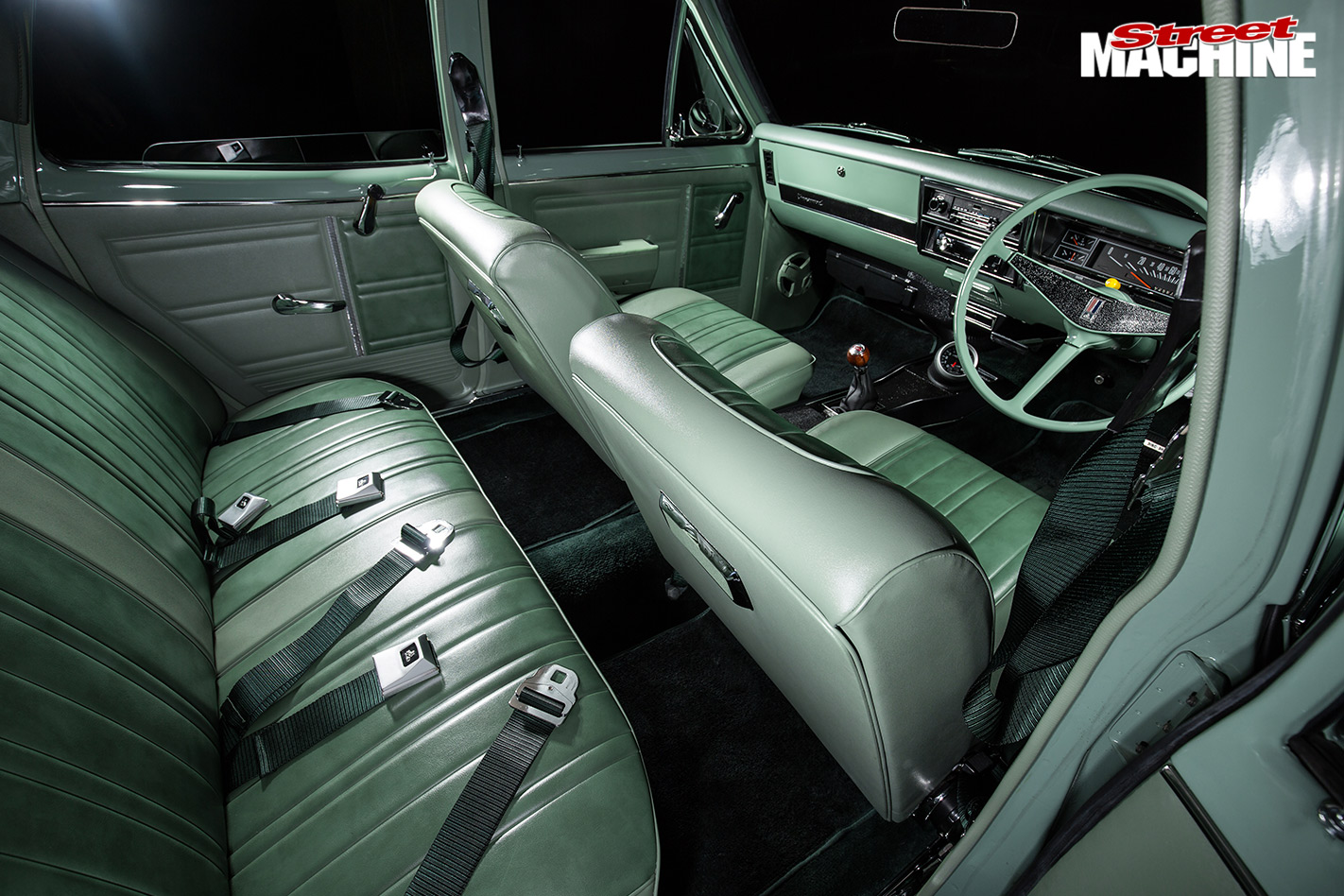 Dan also modified the B&M Quicksilver shifter to provied a manual look: "I topped it with the old Speco gear-shifter that my dad installed in the mid-80s"

Yet once the eight-year build was complete, Dan took his mum Sheralee, aunties Denene and Trish, and uncle Wayne for a spin. “To see the excitement on their faces as the emotions and memories came flooding back made it all worth the effort,” he says. “Now I can make more fun, family memories, and maybe one day when I’m too old to drive it, I might just pass it on.” 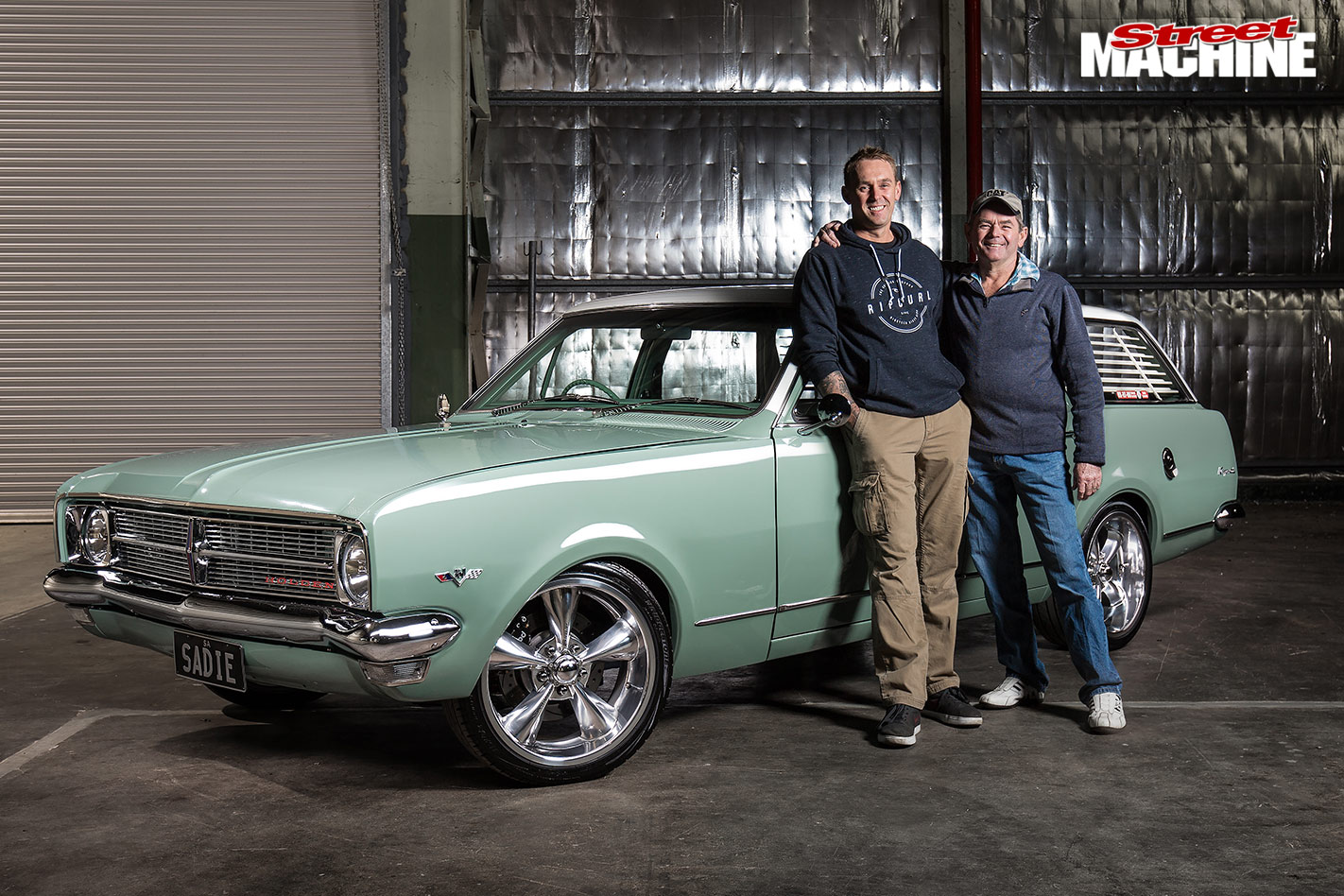