LADIES and gentlemen, as you read this, be aware that we have reached ‘peak Holden’. I guarantee there will never be more genuine Aussie Holdens on our roads than there is right now. For the last Aussie-built Holden rolls off the production line today.

It’s a bloody tragedy what’s happened to our nation’s manufacturing sector. People can fire off on social media or fire up over a frothy, thinking they know the secret to how this all happened, but it really was death by a thousand cuts.

Politically, the right-wingers are keen to blame the union-heavy left. But do unions have something to answer for? They fought for better conditions for factory workers, striving to elicit a fair day’s pay for a fair day’s work from multinational companies notorious for their insatiable desire for greater efficiencies and cost-cutting. At the turn of the millennium, I did a brief stint as a Holden worker and I don’t seem to recall snorting plasma screen TVs and waving pineapples at Hanson Road prostitutes during my off-hours. I’ll admit it was good enough coin for a young bloke, but it was a hard day’s work, 10 hours a day, six days a week.

Yet even if our factories only paid the minimum legal wage in 2017, $18.29 per hour is a shitload more than the six bucks an hour workers get in Thailand. This is the Thailand with whom the Howard Government signed a free trade agreement in 2005, allowing 1.8 million imported vehicles to flood our shores over the next 11 years. Conversely, we sent 100 Ford Territories back to Thailand, where their industry remained protected by hidden barriers and their registration scheme favoured smaller-capacity engines. How was that ever a level playing field? How was that ever a good deal for our country? For shame. 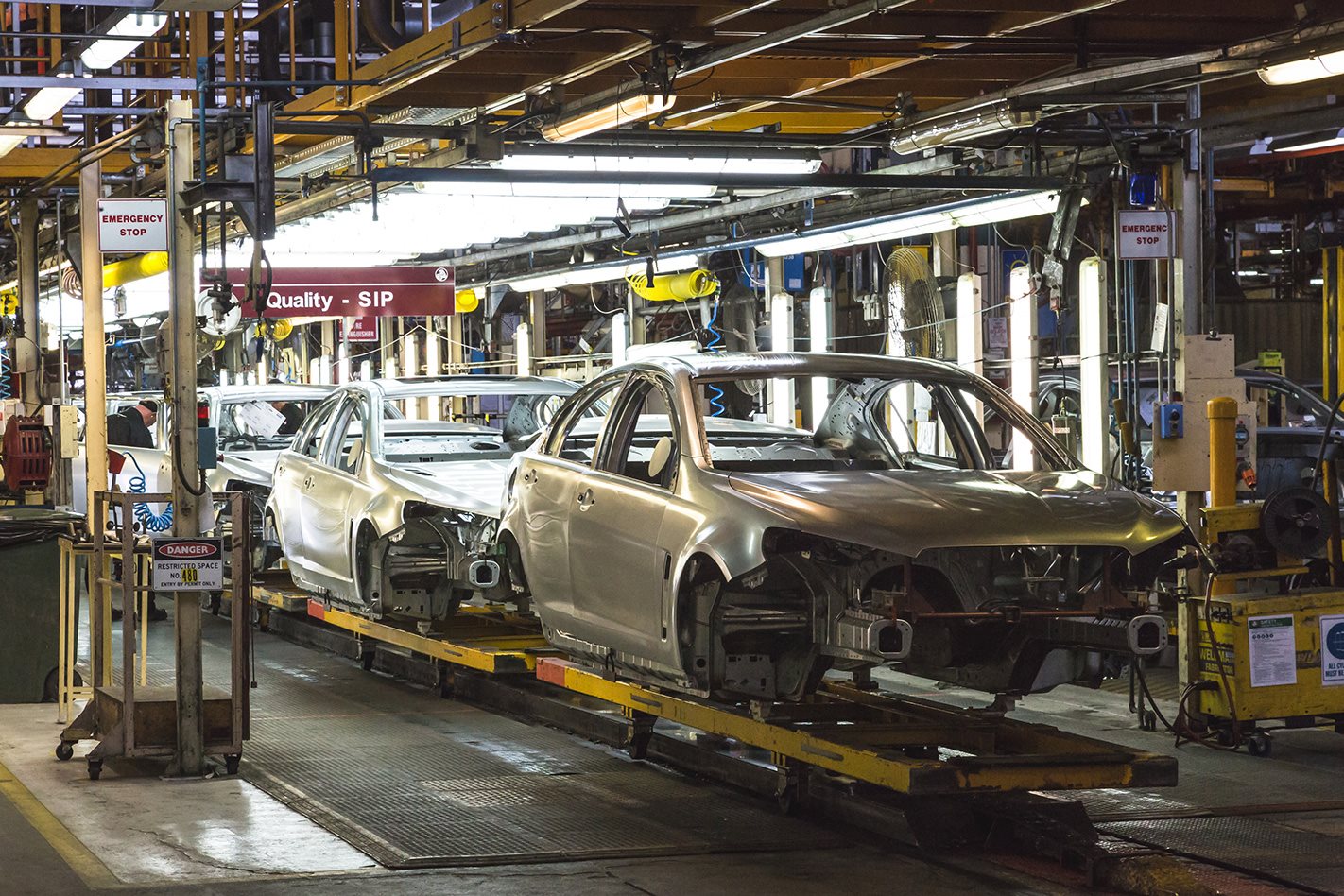 Eight years after the Thai free trade agreement, our industry slaughtered by cheap, tariff-free imports, the Abbott Government goaded Australia’s car manufacturers into pulling the pin in the face of reduced subsidies. And they did – pretty much the next day – with Holden announcing its 2017 closure on 11 December 2013.

Brilliant work, Tony. Australia subsidising its auto industry was no different to literally any other car-building nation. They protect what’s important to them, whether by hand-outs or tariffs or both. There was no heroism in trying to make Australia’s car industry go it alone; it was not a proud moment in our political history. The mining industry and the farmers have all received a top-up when times were bad, because the government then reaps the rewards when times are good. Then Abbott turns around and says: “It’s not the time to play politics; it’s not the time to indulge in the blame game.” Yeah it is; we had it and you ruined it, Tony.

But perhaps it was simply the excuse GM was looking for; the strong dollar under Labor had stifled our export credentials; we’re not a developing nation after all, and six bucks an hour doesn’t buy a pie at the factory canteen let alone sustain a household.

Then there’s the issue of market fragmentation. It’s been pointed out that Holden, Ford and perhaps even Toyota simply failed to keep up with consumer trends. Customers stopped buying Aussie cars en masse – customers that, it must be pointed out, included major fleet buyers such as Telstra and the government itself. Remember when the VT Commodore wagon came out and every second one was a Telstra car? Telstra’s purchasing power was so great it influenced the very design of the VT, with the telco promising massive fleet contracts if the Holden wagon surpassed the Falcon in size. But Telstra moved on, turning to admittedly more practical one-box vans, while the Holden wagon evolved again, losing the booty for the VE/VF and sacrificing load area for style. A decade on from the VT, good used ex-fleet cars dried up and Aussie buyers stopped dreaming about one day upgrading to a new one of the same.

Around the time the fleet cars disappeared, a small but established player gained traction: the dual-cab ute. If you were a tradie 30 years ago, you probably worked for someone. And the pay wasn’t that great, so you drove your 10-year-old HJ Premier carefully to the depot every morning, hopped in a work-supplied vehicle and set off for the day. These days, the boys and girls in the trades are receiving a better day’s pay than they ever have. But in this era of subcontracting and self-sufficiency, companies supply SFA. It makes more sense for subcontractors to lease a dual-cab, dual-purpose ute that covers both work and play, which they can then tax-deduct the living shit out of. It just doesn’t pay to have an Aussie ute for work and a four-door family car for weekends

“But I’m that guy who wants an Aussie ute for work and a V8 Commodore for the weekends! And maybe a V6 Berlina for the wife,” I hear you say. Yep, me too, but there just aren’t enough of us.

We can also touch here on the issue of status. Back in the 70s and 80s, having a Premier, SL/E or Calais in the driveway meant you (or your dad) were doing pretty well. And if it was a Statesman or Caprice parked out there, then look out! You were either very lah-de-dah or had just retired.

They made over 300,000 VT Commodores, and there’s an old adage: Familiarity breeds contempt. With those kinds of numbers, it’s a statistical inevitability that more than a few of these cars, worth $30-50K when new 20 years ago, are going to devolve into dilapidated, unkempt messes. These are the cars with mismatched bumpers and $1000 stereo systems installed ahead of suspension rebuilds, brake work and replacement tyres. Cruising around on three Gumtree alloys and a back-right stocky, they run the gauntlet searching for some back-street single-pegger action before the inevitable canary condemns them to a bleak future at a pick-a-part. 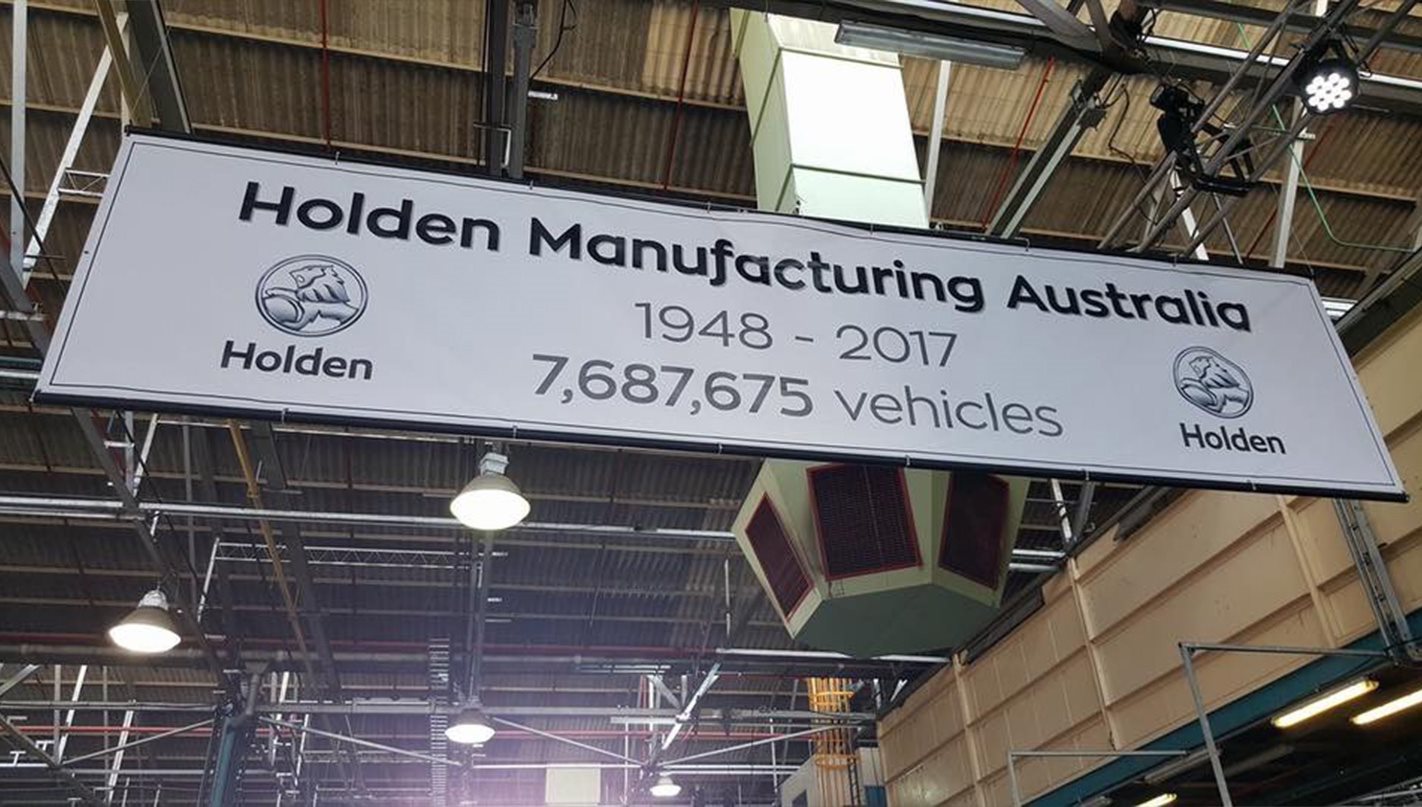 These things don’t happen to Mercedes-Benzes and BMWs. Pound-for-pound more expensive to purchase in the first place, they were bought by a different demographic, but more importantly, 20 years down the track they’ve either been kept running with no expense spared or towed to the wreckers, still pristine and intact, but with a small problem that was just too expensive to be worth repairing.

So now, a generation later, putting a brand-new Calais in the driveway isn’t quite so desirable. Perception has shifted; owning a ‘Calais’ could mean you own a brand-new, cutting-edge, LS3-powered sledgehammer or a $900 shitbox with a 350,000km Ecotec and missing fuel flap. BMW owners have no such problems; even if they’re actually driving a nine-year-old 120i with prematurely smoky valve-stem seals, it’s still a BMW.

This brings us to the former V8 Supercars racing series. Anybody who watches Supercars knows that these things are filled with cutting-edge tech, but are built to a compromised formula. And it’s not without irony that although the Car Of The Future parity project did away with most of the parts that made the cars a Ford or a Holden, there are still always a couple of guys trackside yelling: ‘Buyaholdenyagunts!’ at anybody wearing a blue shirt.

This feeds the false perception that these race cars are dinosaurs, which filters through to the road cars they merely resemble. Those disparaging of the Supercars series cite the lack of cams and turbos as archaic, and these guys are never going to desire a shiny new V8 Holden in the driveway. We’re now such a long way from ‘Win on Sunday, sell on Monday’. 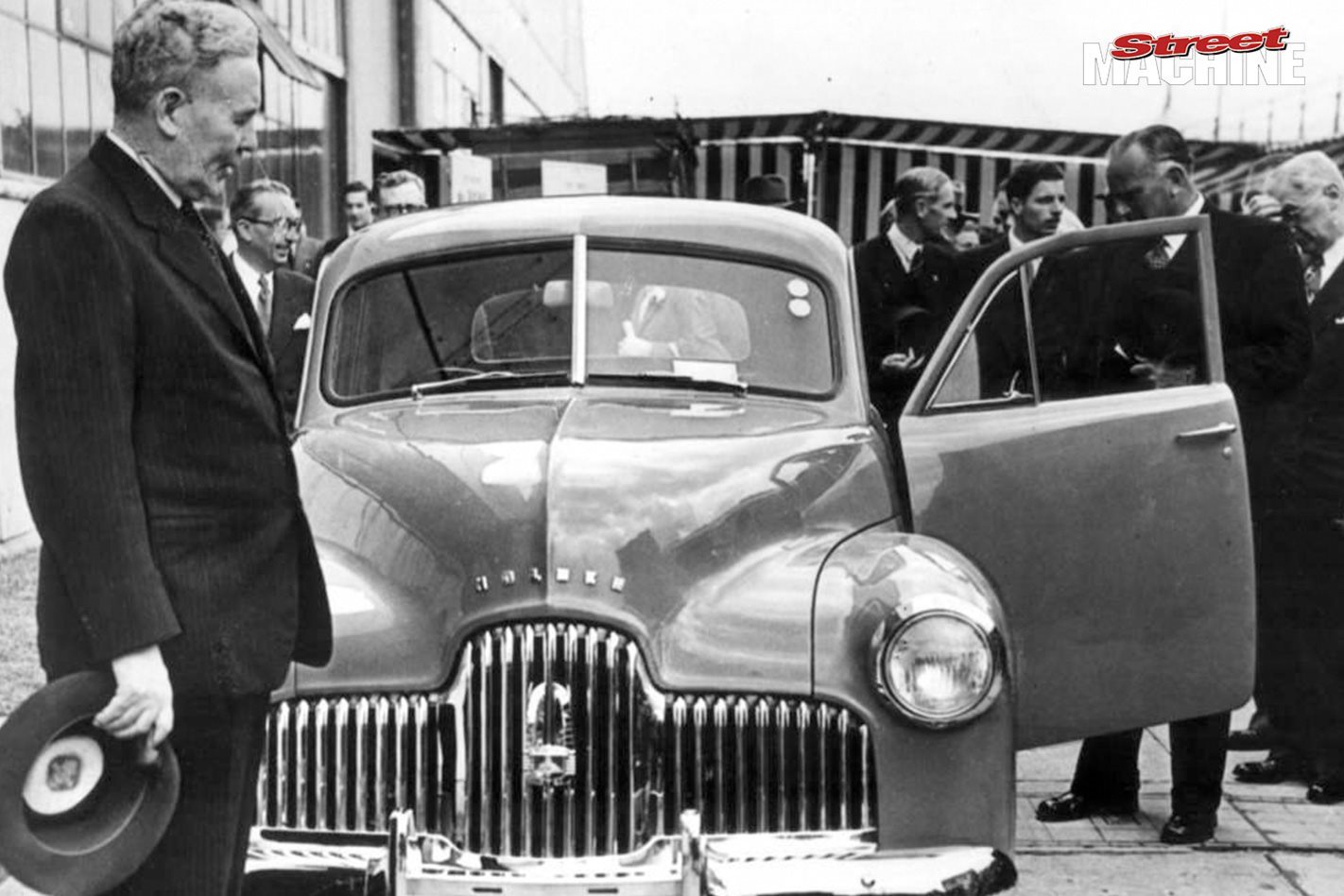 There are plenty more reasons for Holden’s sales malaise; what about the size of modern child safety restraint systems that apparently necessitate an urbanised Hummer to do the school run? Or the unceremonious banning of adverts that showed storm-causing circle work and a guy daring to enjoy driving, all because of a smattering of wowser complaints? And I don’t have the energy to get into the shitstorm that followed GM’s bankruptcy in the wake of the 2007 GFC; suffice to say we’re probably lucky we kept Holden as long as we did.

All these things have come together to kill off the Aussie car, but perhaps the crux of it is that Australia has outgrown the Falcon and the  Commodore; the diversity of choice demanded by consumers has reduced the number of Aussies who still want a big sedan. The young are more concerned about Samsung vs Apple than Holden vs Ford, while the oldies need something more Prado-ish to tow the caravan.

A Falcon or Commodore is no longer what the majority demand, and while the remaining faithful (that’s us) are enthusiastic and vocal, we didn’t pay enough of Ford and Holden’s bills for them to warrant sticking around.

When did we become so complacent as a nation? If this had happened in the 70s or even the 80s, there would have been rioting in the streets. There might even have been some blood. Instead, all we’ve had are a few news stories and vision of some lonely cars exiting the production line, proud but sad workers looking emotionally towards an unsure future outside of Elizabeth’s vast manufacturing facility.

BLOWIN' GASKETS: THE NEEDLESS DEATH OF THE AUSTRALIAN CAR INDUSTRY?

I’ll let you in on a little secret. I was nine years old when Holden and Toyota announced the 1987 UAAI model-sharing venture; I read about it in Wheels magazine, and I cried. I remember my mum comforting me, probably thinking: “Why can’t my kid cry about normal bullshit like stacking a skateboard or wanting to eat chips for breakfast?”

But not knowing the whys and wherefores of boardroom dealings and factory buyouts, I had looked backwards to Chrysler Australia’s takeover by Mitsubishi and felt that perhaps Holden would meet the same fate, absorbed by Toyota’s worldwide operational combine. History shows that my fears were unfounded and once both manufacturers realised that Lexcens and Novas were a stupid idea, that dark period was over.

Holden has experienced some halcyon days since then, and for a while in the 2000s, they were untouchable, making dozens of models and churning out stunning concept cars with alarming regularity.

But here we are for real, my childhood fears finally come to fruition. And when I pulled my November 2017 Wheels magazine from the letterbox and saw the  stunning subscriber-edition cover, I cried again for the American-owned but quintessentially Aussie brand of car that I’ve loved my whole life. That simple photograph of an FX Holden trundling down a sunset-soaked dirt road, with the words ‘End Of The Line’ beneath, illustrates with a humble elegance the closure of our proud automotive history.

As the final Aussie-produced Holden – a red Holden VFII Commodore SS-V Redline – is primped, preened and photographed, looking forward to an easy life cossetted in museums and displays, the men and women who built it must clock off with a chest-bursting feeling of pride in their product and rest easy knowing that their output contributed in no way to this endgame. 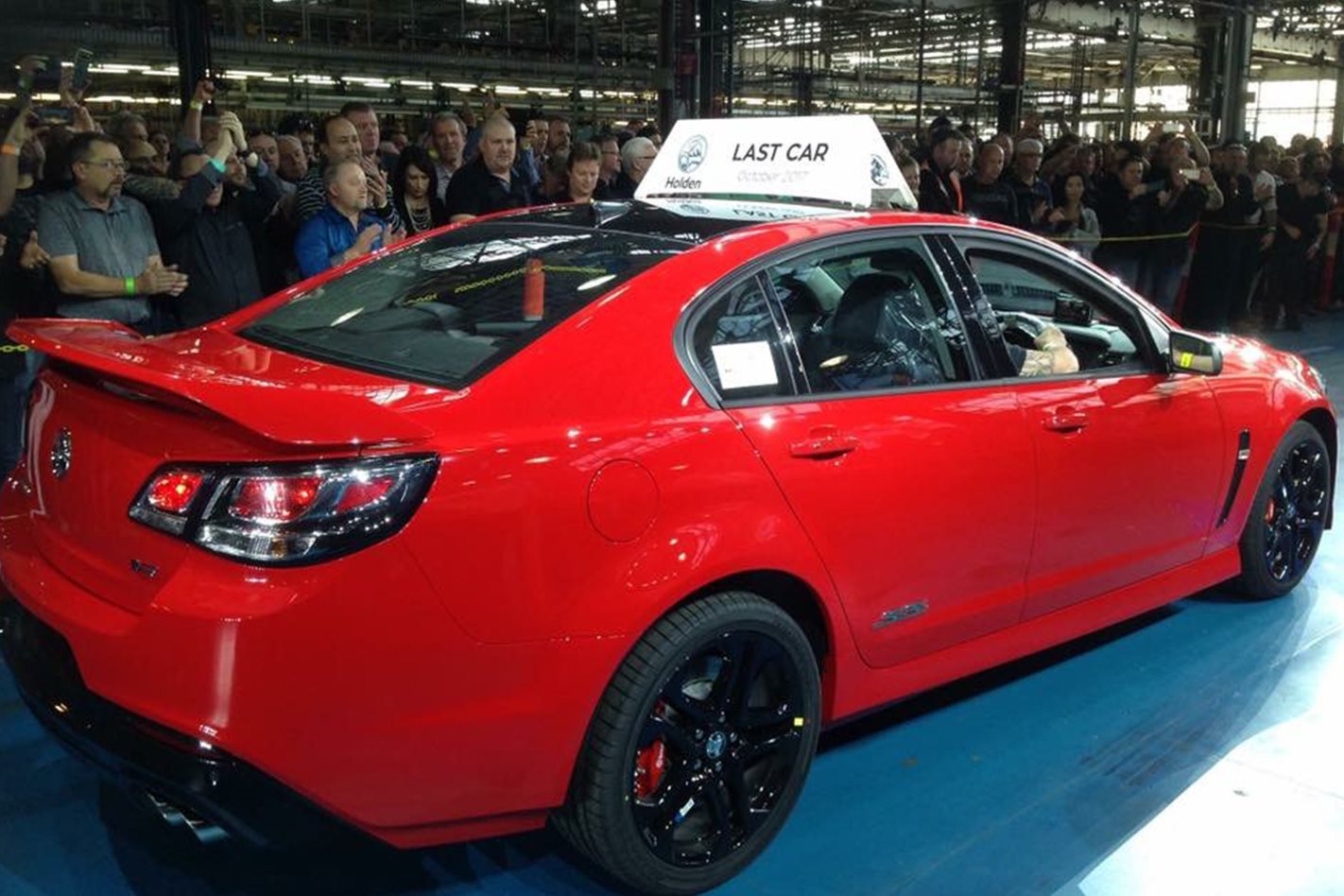 There was no singular mechanism that brought this about; there was simply a series of events that fed into the perfect shitstorm that resulted in the ridiculous situation we face as a nation today, Friday 20 October 2017.

With peak Holden occurring right now, whenever you read this, remember that we’ll never see anything like this again in our country. If you own an Aussie-built Holden, cherish it and look after it well, for it will be a good car. And, in time, irreplaceable.