From 70s factory muscle to 80s wild custom and now a modern-day tough streeter, Georgio Lafazanis's R/T Charger has been there, done that, and is now set to run 12-seconds

THIS tough Hemi-six-powered Charger has been part of Georgio Lafazanis’s family for nearly 40 years. “My father Nick bought it as his first car in 1976,” 30-year-old Georgio explains. “It was a genuine two-barrel R/T, but it was already modified by the time Dad got it.” 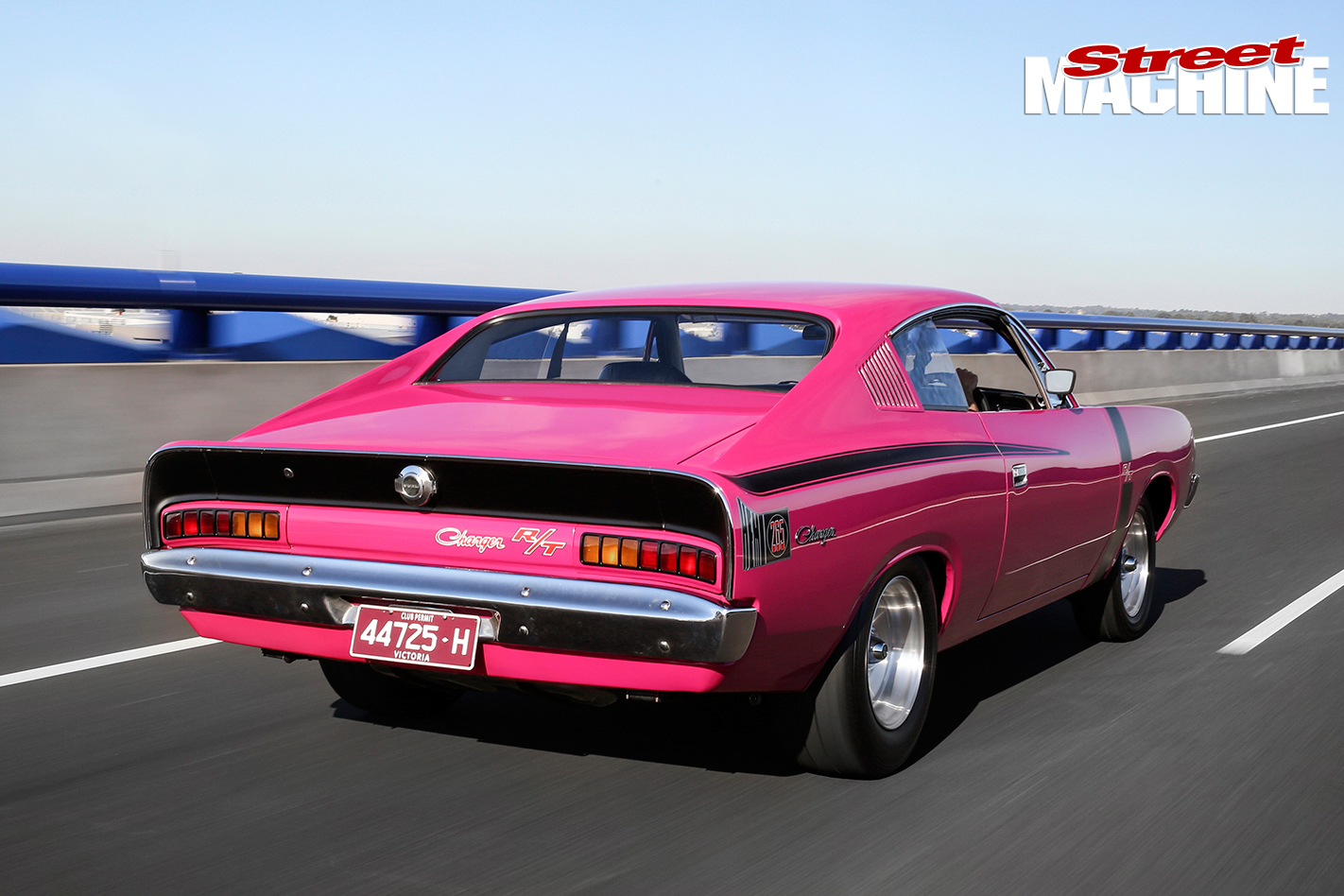 That’s for sure – the two-barrel running gear had been replaced with a complete E48 driveline, including a triple-Webered 265, close-ratio four-speed and Dana LSD, while the body had been treated to a GT Falcon bonnet and side scoops, a spoiler and a pair of Thrush sidepipes. Super-cool stuff for an 18-year-old P-plater back in the day. 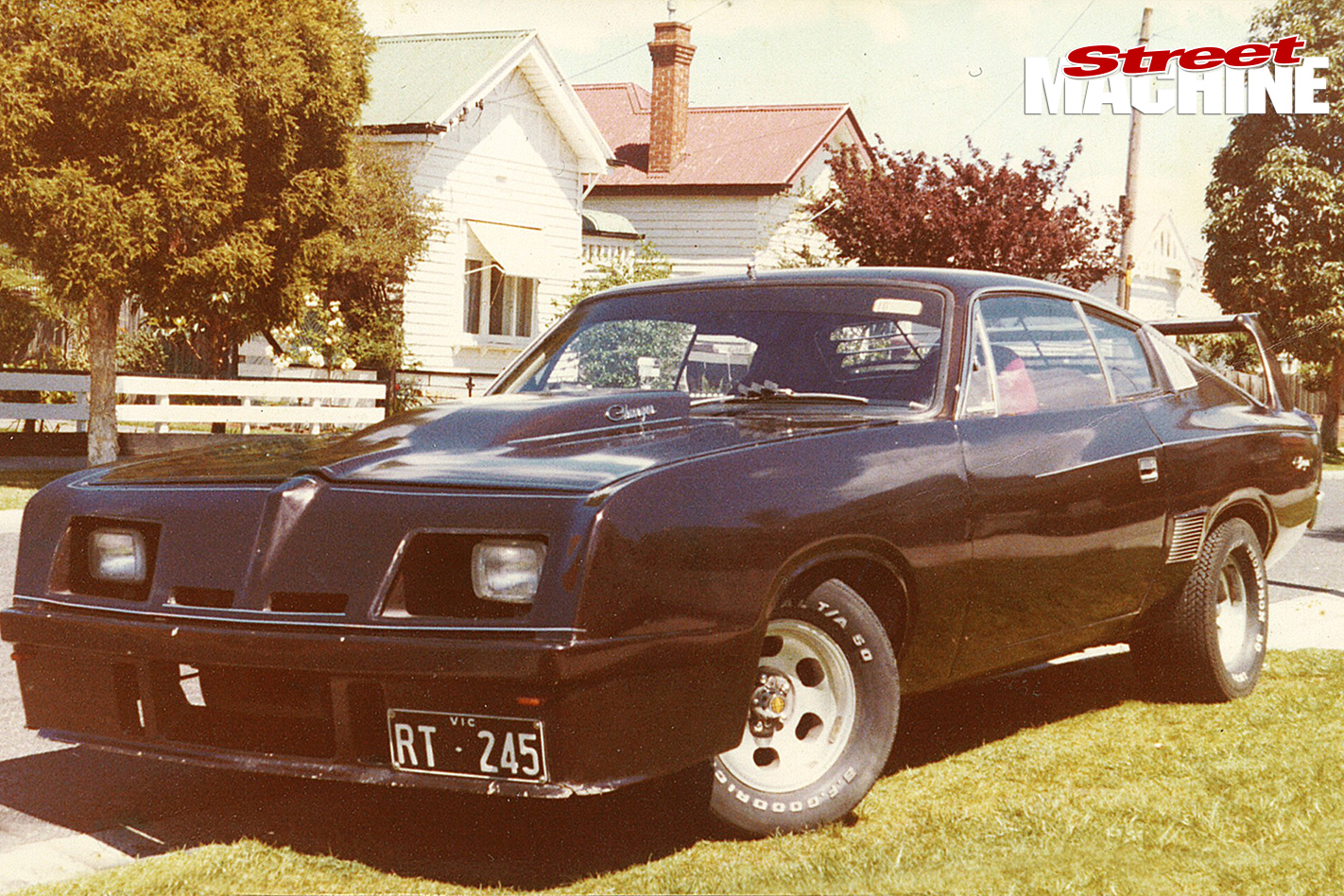 A dinged front guard was enough for Nick to embark on a custom makeover. An Arcadipane Concorde front – yep, they made them for Vals too – was fitted with a Dayton-styled rear wing, along with a respray in brown with gold flake

“Dad fitted a Concorde front, Daytona rear wing and A9X-style bonnet scoop,” Georgio says. “The magenta was gone in favour of metallic brown with gold flake, while the traditional black R/T interior was retrimmed in dark brown velour. I guess it was the in thing!”

Indeed it was. By the end of the 80s, though, Nick was having a change of heart. The Charger was stripped bare for an original-style resto, but family and business priorities saw it relegated to the backburner for a number of years. 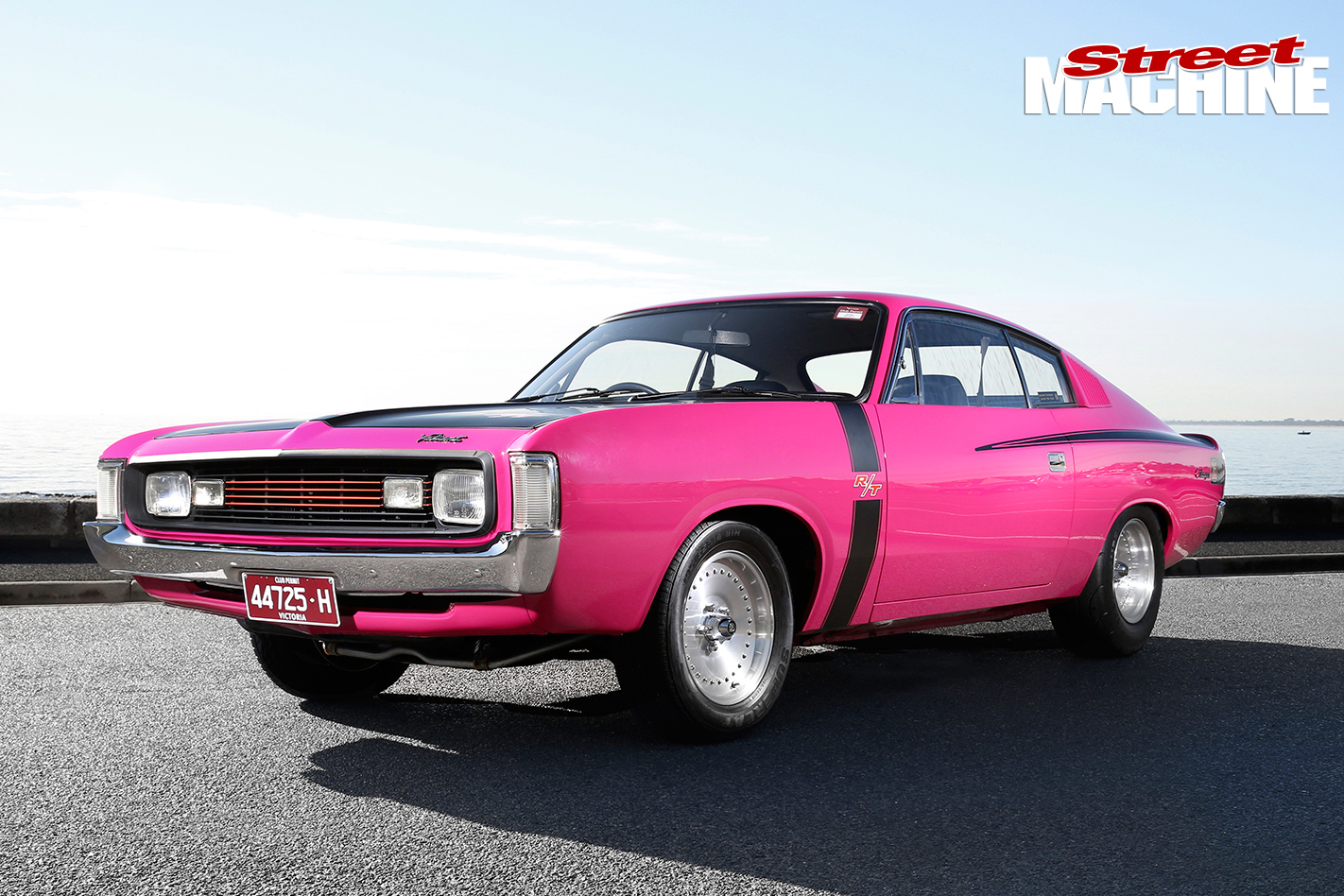 “As a young bloke of nine or 10, I’d scour car mags; it wasn’t long before I realised what we had collecting dust in the shed,” Georgio says.

“The Konstandinou brothers, Michael and John [later of ICE Ignition and CHI fame respectively], along with their mate George Germanos back in the Hemi Heaven days, would always be tinkering in their garages so I’d float around and help where I could. Their Hemi-powered LC was a tough car and left a huge impression on me. So I asked Dad if I could build the Charger and he was like: ‘No problem.’ Easy as that!” 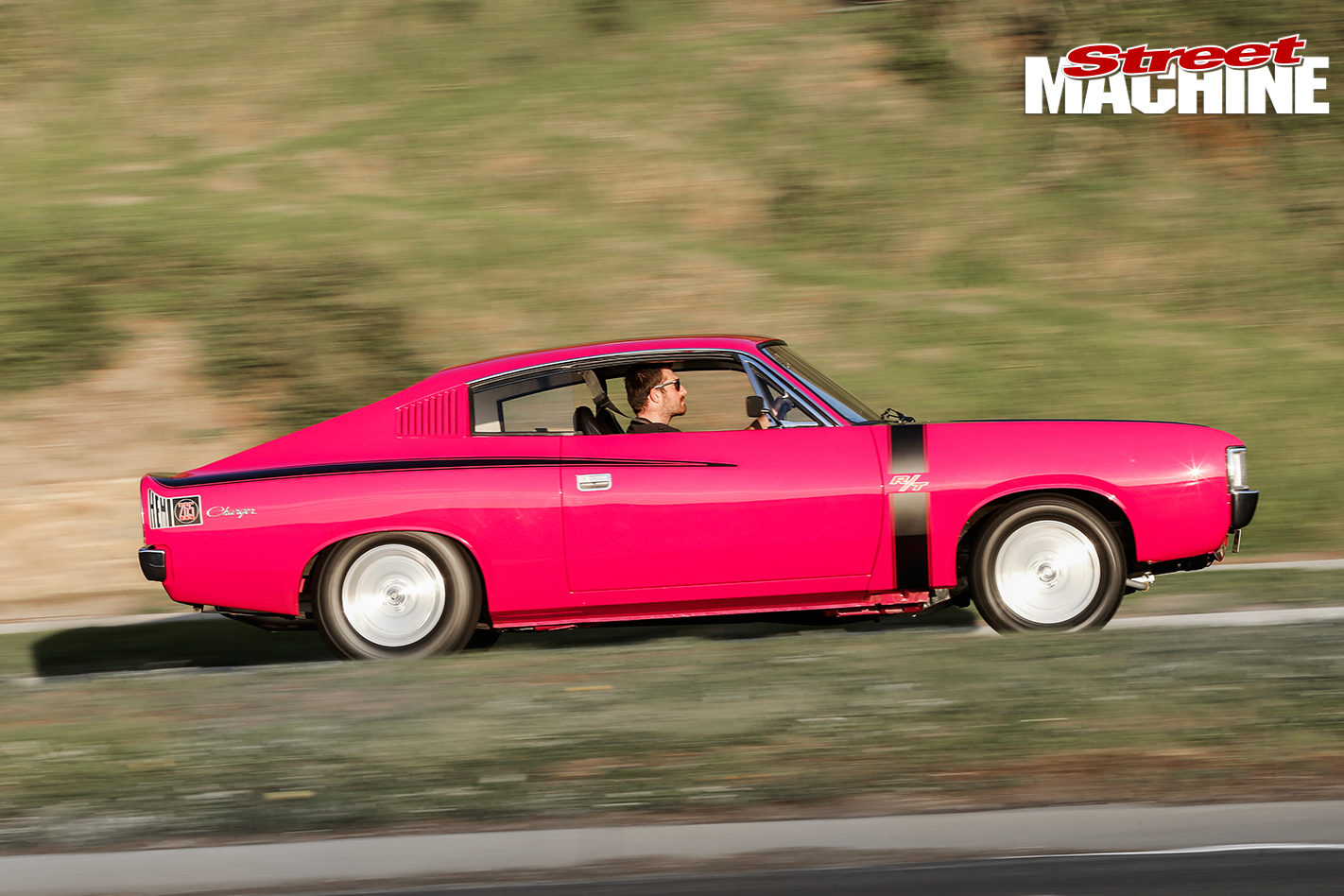 The quality of the build hasn’t gone unnoticed, with Georgio scooping plenty of first placings at some of Australia’s top Chrysler shows

Nick and Georgio gathered up boxes of the original parts, then Georgio spent the next couple of years buying new pieces and saving coin before kicking off with the body and paint. “I was 18 and jammed full of youthful enthusiasm,” he says. “It wasn’t long before I’d stripped the old paint by hand, sandblasted the floorpans and undercarriage, and laid on etch primer.”

The car was delivered to longtime family friend Andrew Hutchinson, who weaved his magic on the body and paint. “Andrew has been involved in the hot rod and classic scene for many years and knows his stuff, so I’m grateful for his help. 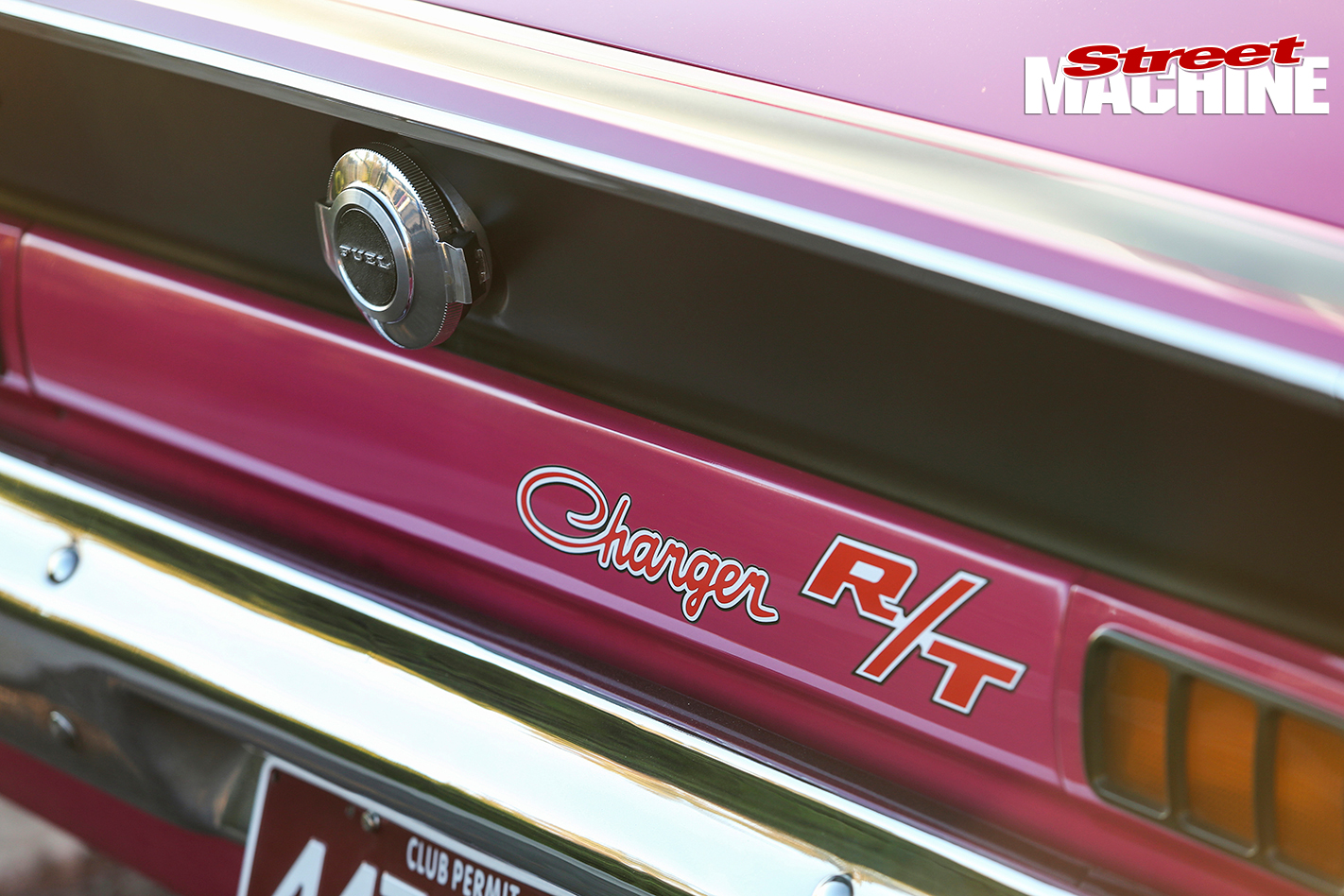 “We worked on the shell usually once or twice a week for two years, often into the early hours, repairing rust in the usual Charger spots – the floor, plenum, sills – before finishing the car in Spartan acrylic lacquer.”

The magenta paint the Charger now wears is the factory colour the car started life with. Back in the day it added a serious US muscle flavour to our local Mopar product – the Ford and Holden blokes can keep their greens, oranges and yellows! 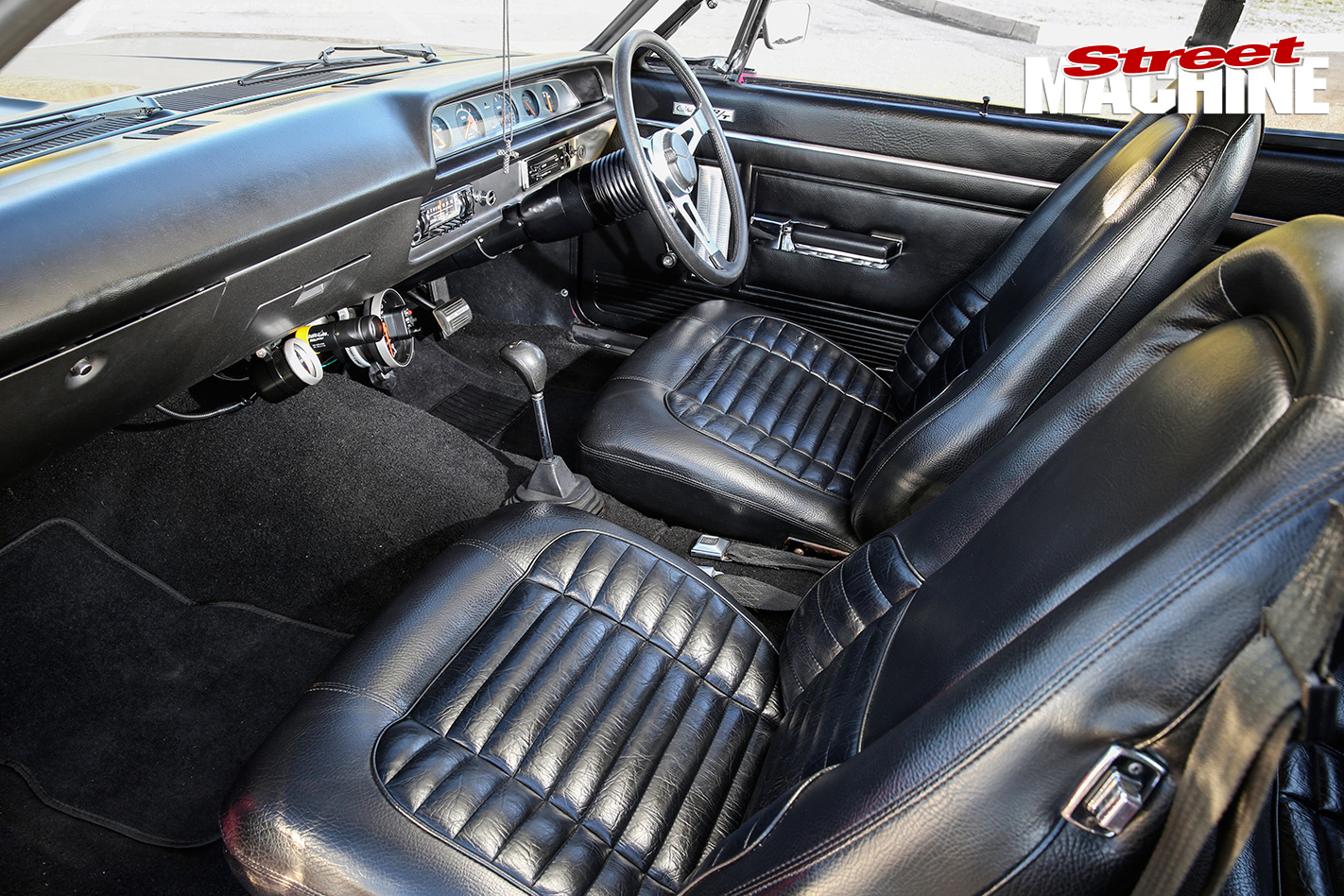 The black interior took a wild detour early on in life with a re-trim in brown velour. Georgio collected the necessary goodies to return it to stock

The restored shell made its way home, and so began the tedious task of reassembly. The custom dark brown velour interior was not quite in keeping with Georgio’s plans, so Terry’s Motor Trimming was entrusted to return it to factory specifications. Black vinyl and carpet feature throughout, with the only deviation from stock being the addition of some necessary Auto Meter gauges. 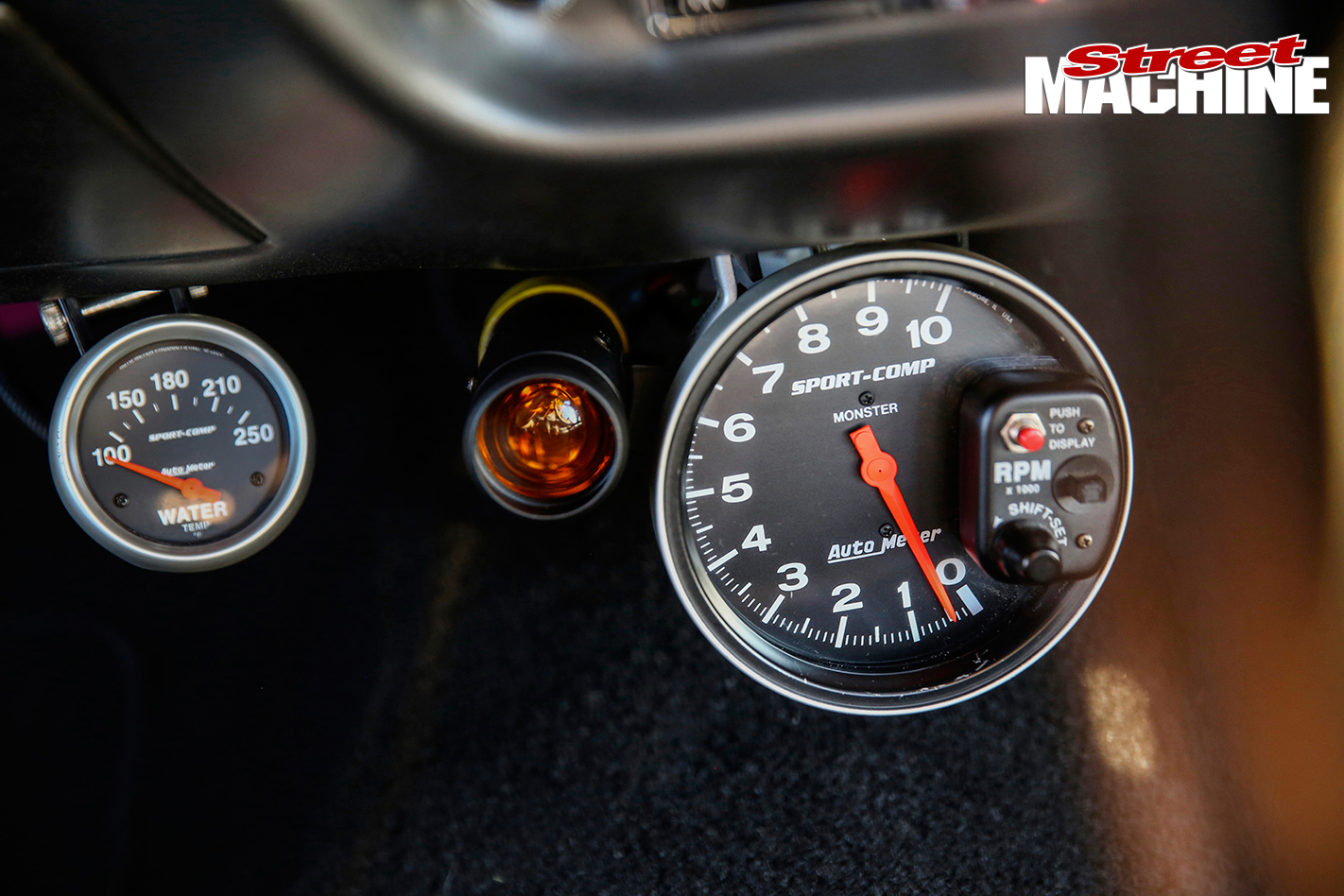 You see, where Georgio swayed from the resto path was with the driveline. Sure, it still runs the factory-styled Hemi 265, but a factory two-barrel Carter carb never got a look in. 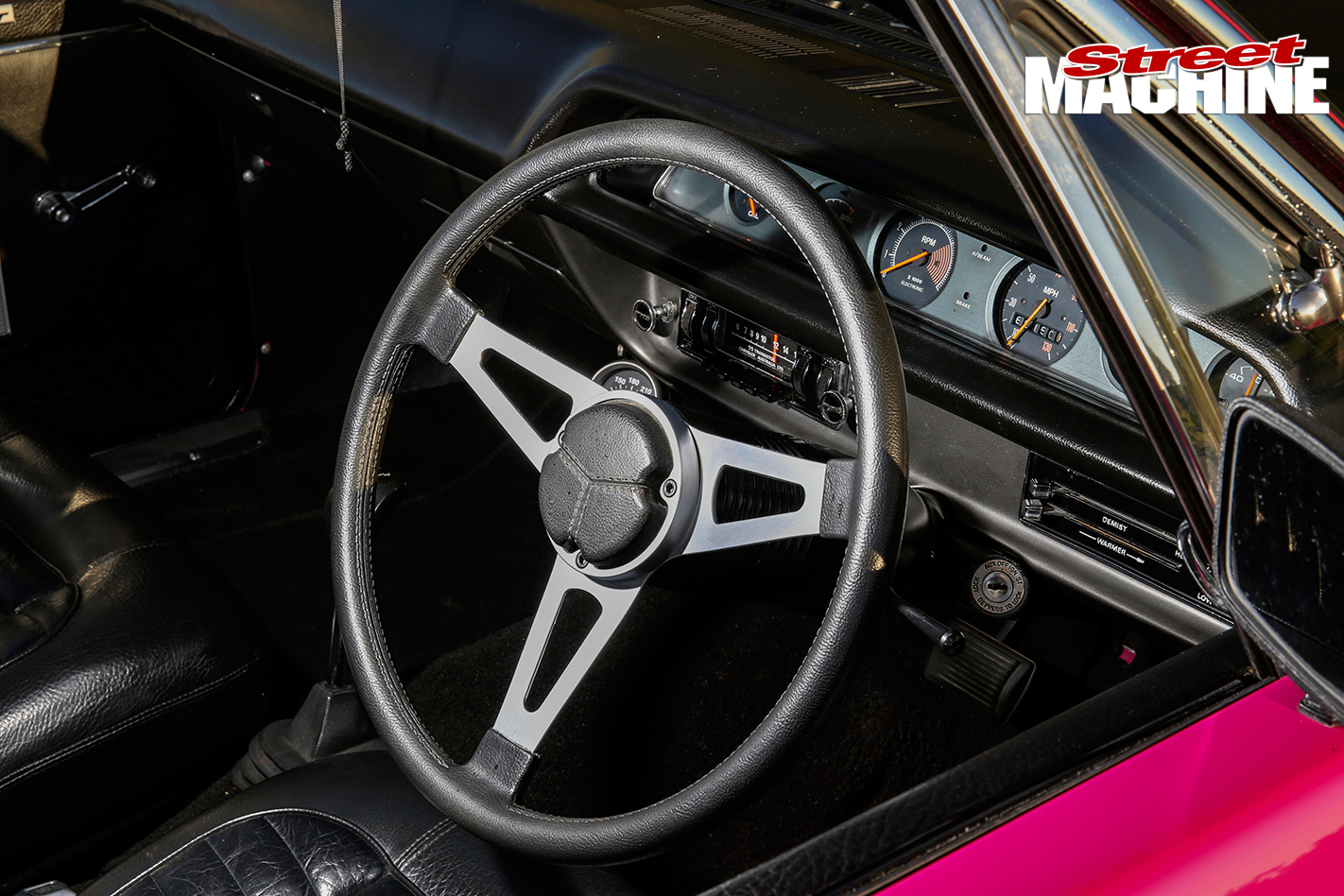 The drag racing bug chomped Georgio fair on the arse, so last year he called on his good mate Chris Dinos of Chris’ Porting Service to screw together a stouter version of Oz’s most famous six-cylinder.

The factory saw fit to use a seven-main-bearing crank, so a standard block and bottom end is plenty tough, but a full balance job. ARP fasteners, stud girdle and mild grout-fill were added to be on the safe side. JE pistons round out the short assembly, while a custom pump and ASR sump take care of the oiling duties. 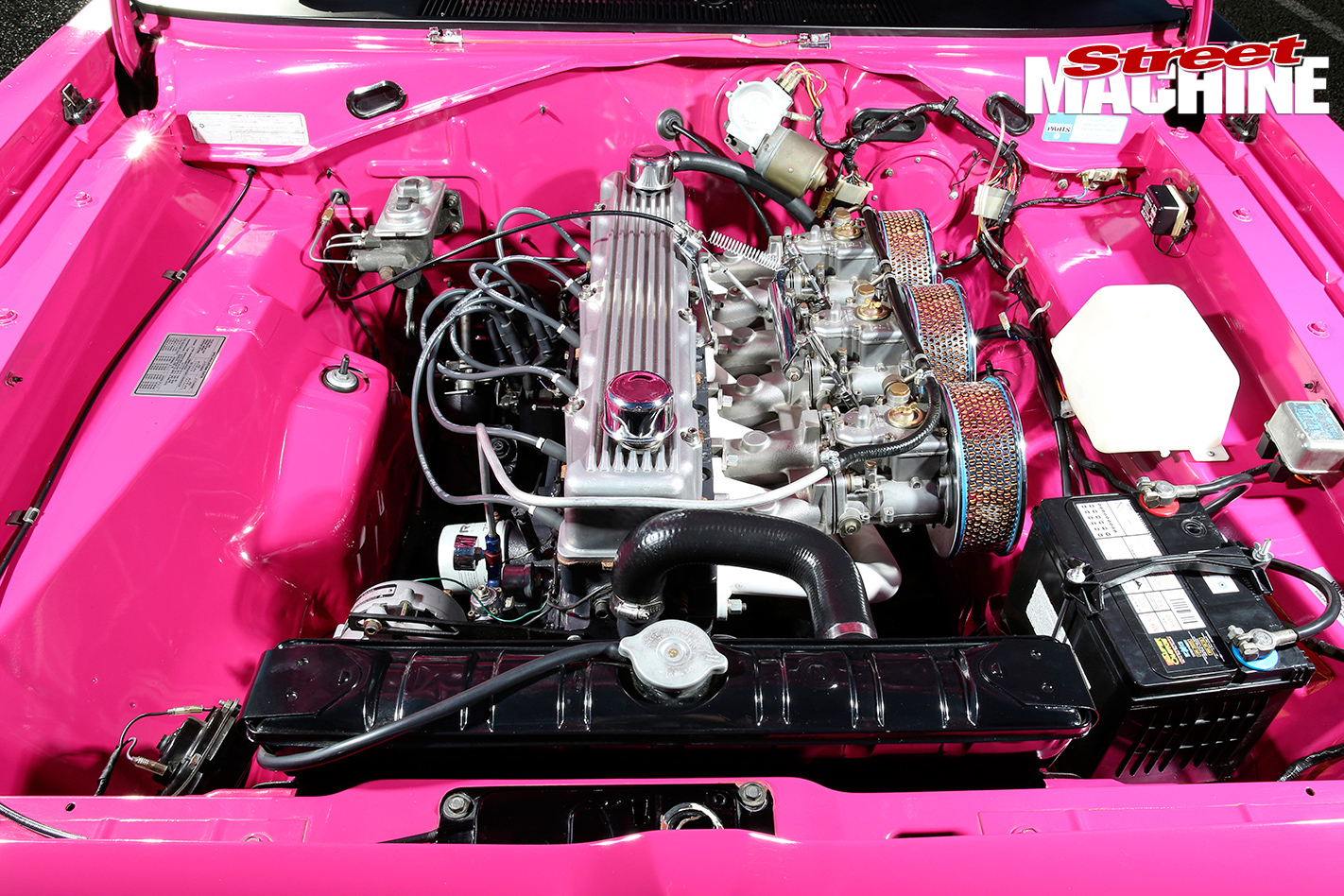 A custom-grind solid Crow cam was dialled in, and works in conjunction with Crane lifters and Jet Engineering pushrods. The cylinder head is a droolworthy CHI alloy job, ported and fitted with Ferrea valves and Iskenderian springs.

A full ICE ignition system handles the spark, which along with the CHI head allows Georgio to pay homage to the guidance offered by the Konstandinous early in the piece. 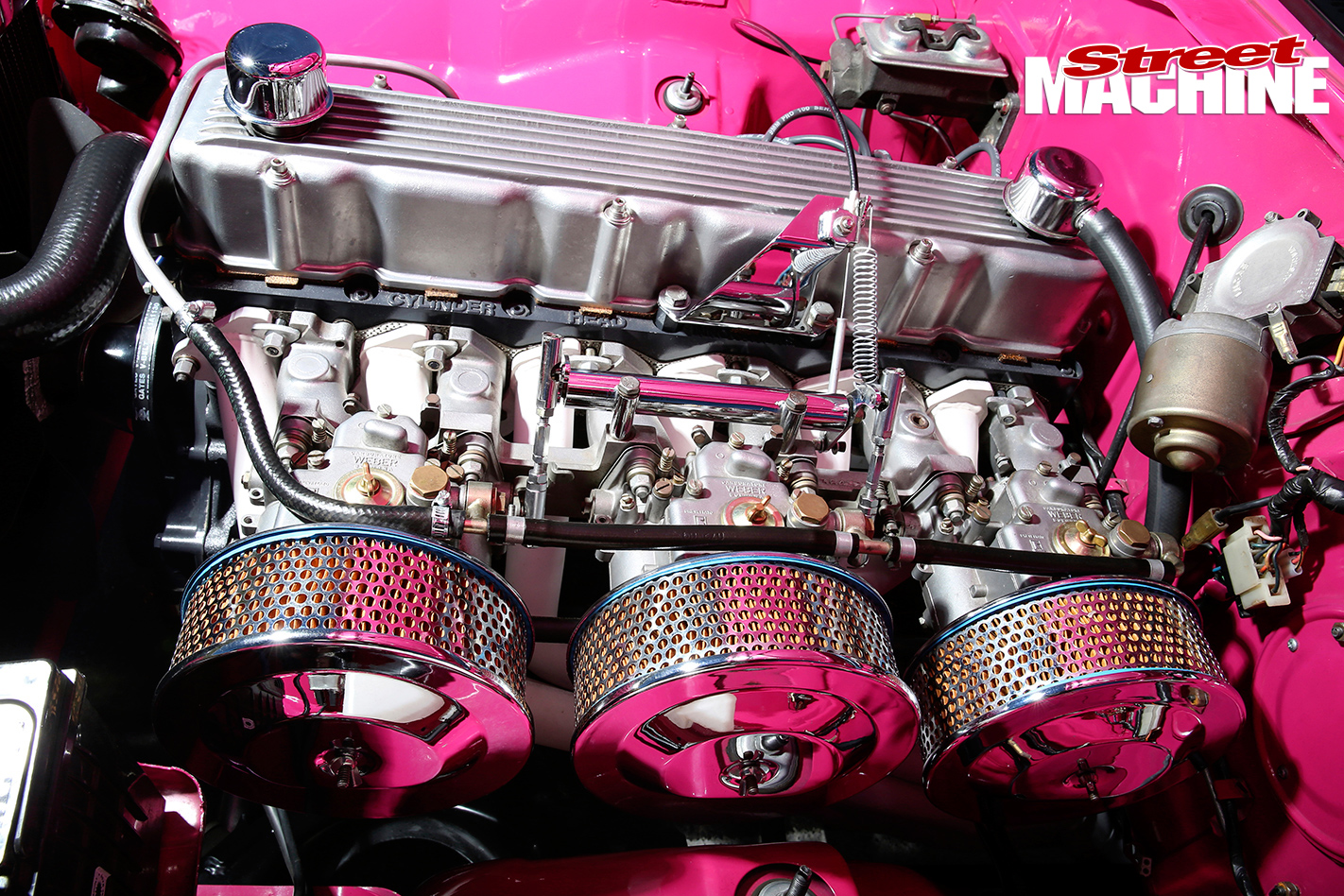 Hurricane extractors, along with a single three-inch system, take care of the exhaust.

This new combo blasted out a healthy 385hp and 365ft-lb on the Dandy Engines dyno, with a resultant 322rwhp fending off some stiff competition to win the six-cylinder class at this year’s Chryslers On The Murray. 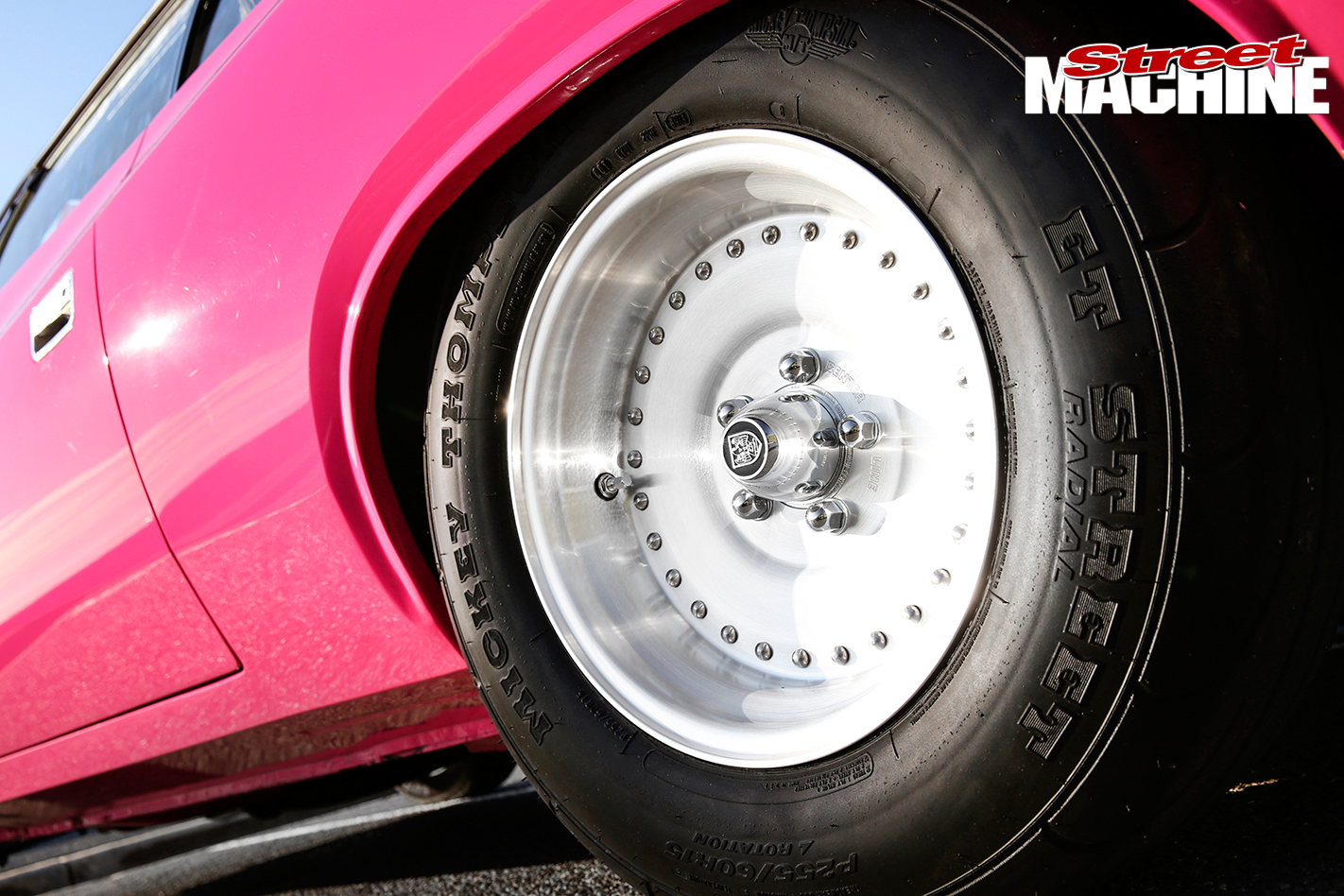 “It’s under-carbed at the moment so a switch to bigger 48mm Webers and refining the tune should see it pump out around 410-420hp,” Georgio says.

The current single-rail four-speed is hanging on by a thread, so a Top Loader conversion is on the cards. The 3.27 gears have also been swapped for 4.11s with Moser axles in preparation for more strip time. 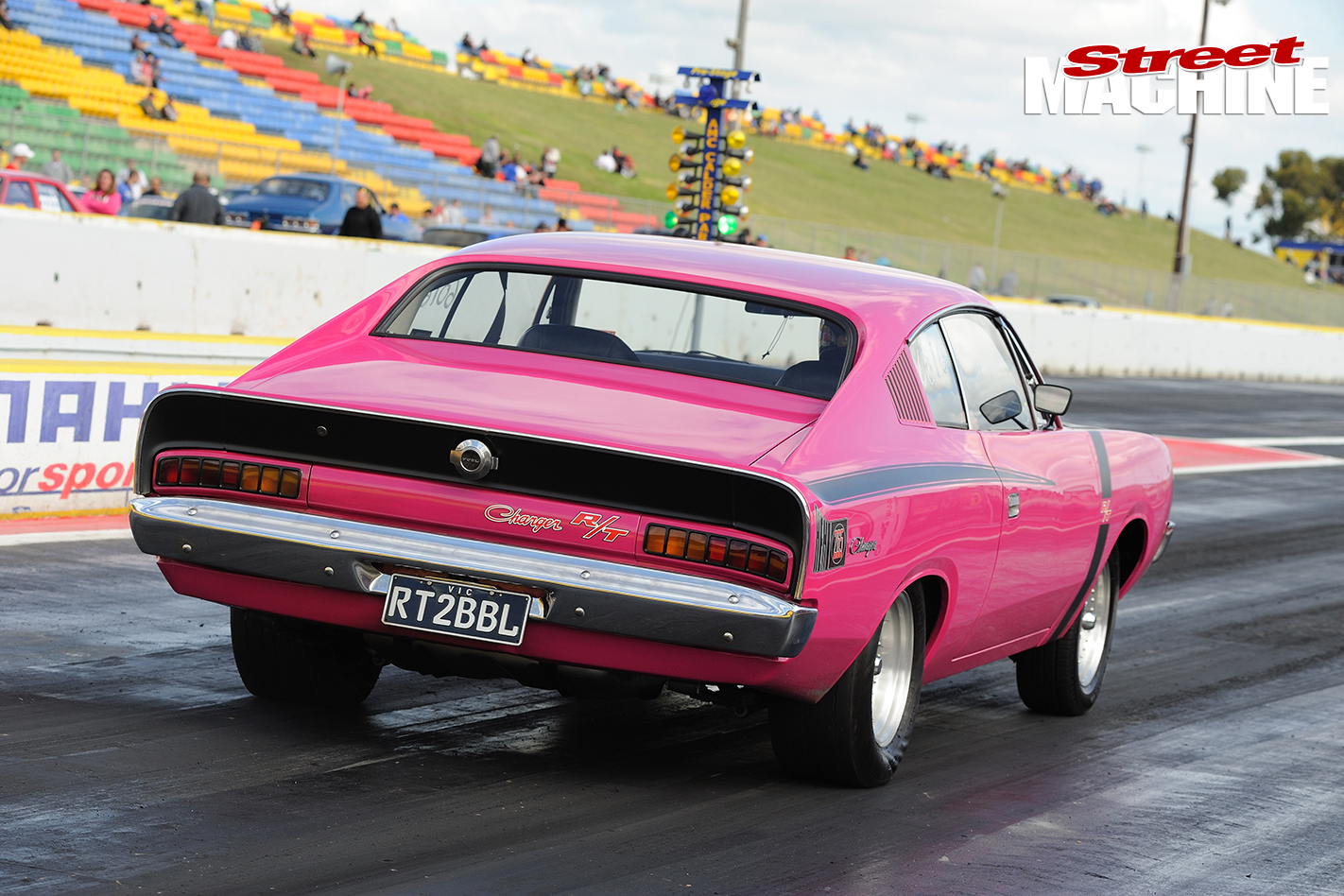 “I’m hoping to dip into the low 12s, which would be awesome,” Georgio explains. “I couldn’t be happier with the new combination. It has plenty of grunt and has upset a number of V8s too, which is always a bonus!”

And what does Dad think? “He loves taking my mum Niki for drives to reminisce about the early years. I was storing it at their place, so would go over to take it out and sure enough, the garage would be empty. So yeah, he’s proud and he’s excited!” Georgio laughs. 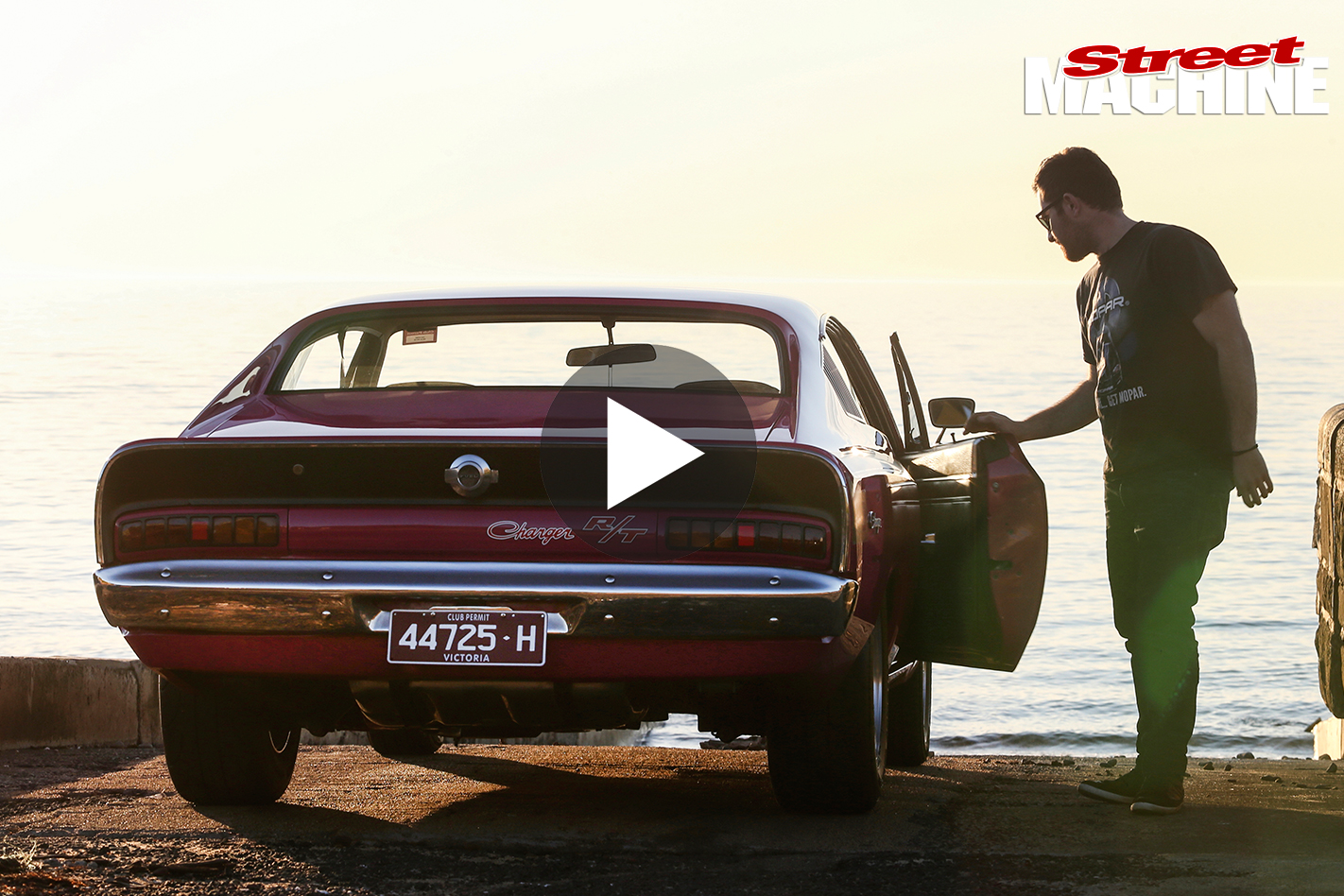