CONSIDERING Gary Myers has won the 2000 World Burnout Championship together with three other Summernats burnout titles, few could argue that Gary and his flamed 1966 Mustang Coupe don’t lay down the best burnout show on earth!

Like all self-respecting street machiners of a certain age, Gary has been attending Summernats since its inception. In the early 90s he entered the burnouts just to have fun and, with encouragement from close friends, decided to have an earnest crack at the title in 1992. 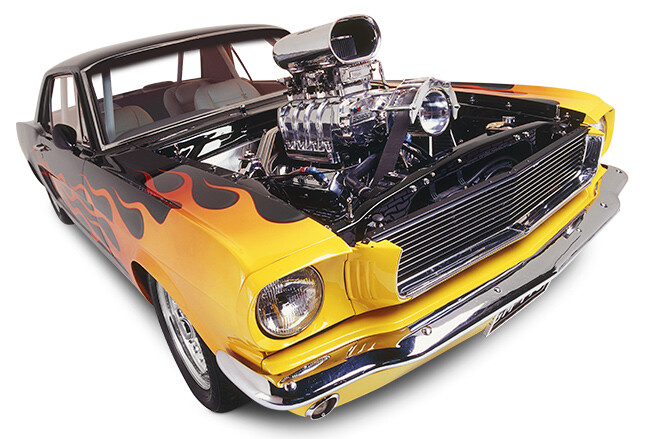 Unfortunately he came up against another burnout legend, Chris ‘Real Men Smoke Eagers’ Christou, whose Falcon GT proved too strong and won for the second year in a row.

Far from being deterred, Gary returned even more determined the following year and ended Christou’s winning streak. The victory was the first of Gary’s four Summernats burnout titles, three of which Gary managed to secure in succession.

For 2000, Gary intended merely to play spectator, but then the temptation of being the inaugural World Burnout Champion proved too enticing.

During the whole of his burnout career, Gary’s weapon of choice has been his mega-tough, blown, black 1966 Mustang. Oddly, this extraordinarily popular machine has undergone few changes apart from the tubs and a Dwayne Baugus flame job since first appearing in 1988. 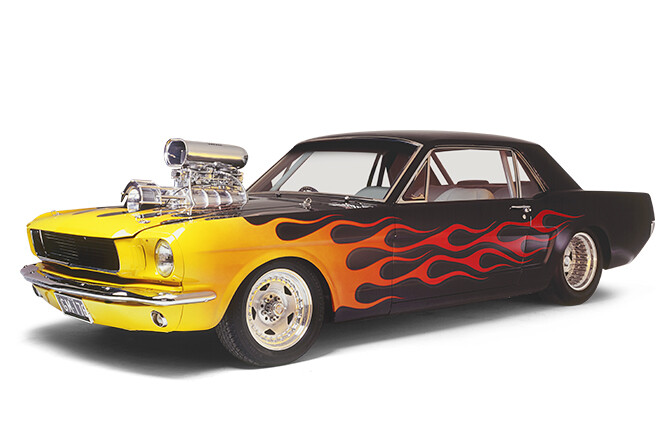 That’s not to say the nasty Mustang hasn’t undergone a rebuild or two. Ditto the Jarrod Wood/Daniel Murphy-prepped and Hillis Ford-painted bodywork, on account of the damage caused by flaying steel tyre-belts.

You don’t win four Summernats burnout championships without a stout steed, and the Mustang’s blown 302ci Windsor is one of the sweetest powerplants you’re ever likely to encounter.

Dominating every angle is its highly polished Fisher 6/71 supercharger pushing 8lb of boost. It sits proudly atop a Fisher-modified Weiand tunnel ram and is topped with a pair of detailed and chromed 600 Holleys.

Inside the stock Ford block is a set of forged pistons running at 8.5:1 comp, connected to a standard crank located in home-made steel mains caps. 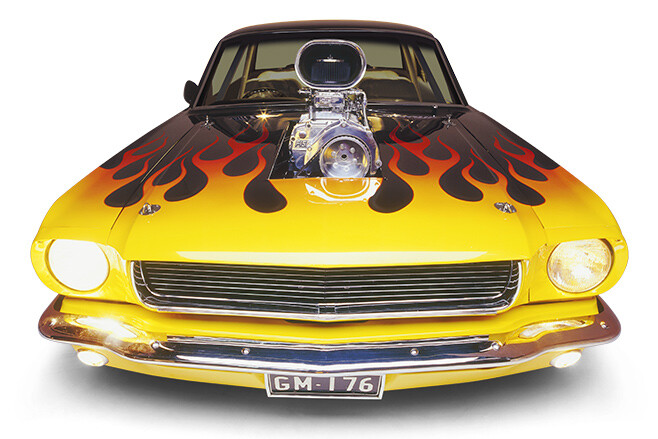 It’s a modest set-up that Gary originally screwed together 12 years ago with a periodic overhaul/freshen up. The combination delivers excellent torque and will comfortably sit on seven grand all day. The result of all this mechanical cacophony is an honest 500 neddies.

While this number may sound small to some, Gary’s Mustang never wants for power when it counts, which makes you wonder about some others’ claims!

The car was initially equipped with a four-speed Top Loader, but after a succession of busted axles and fried clutches it was turfed in favour of a Raceglides-built two-speed Power Glide.

While infinitely more reliable than the four-slot, the Glide has not been without its dramas. After a particularly vicious reverse burnout, the auto’s barrel decided to exit through the top of the ’box. It smashed its way through the trans tunnel and ripped into the underside of the dash, inflicting enough damage to Gary’s left foot to keep him off work for two months. Now a trans-blanket gives Gary peace of mind ... and added security for his feet. 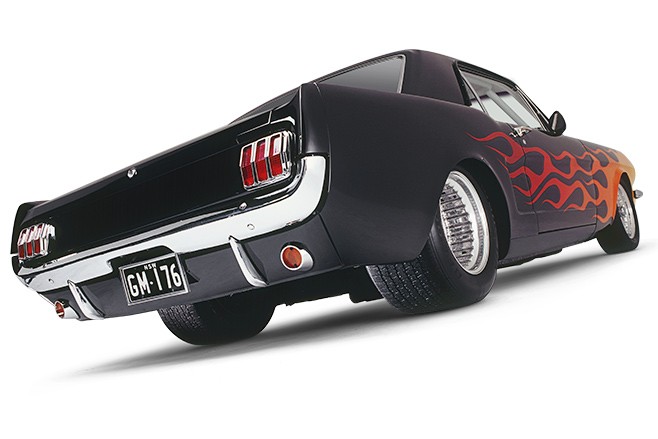 As for getting the power to the ground, a few of Gary’s rivals might be miffed to learn that Gary bagged one of his victories with a hastily rewelded axle spline after wrecking two separate axles in the same weekend!

Oil surge during savage circle work in the doughnut pad was another problem, causing oil to spew out onto the red-hot headers, leading to highly undesirable engine-bay fires. A polished oil-surge tank halted this potentially disastrous problem.

To make the biggest impression with the crowd, Gary prefers to make his run late in the day. By then the track has a thick coating of grippy rubber laid down. With BF Goodrich T/A 275/60-15s bolted up, Gary needs to be confident the excellent traction doesn’t spit out the diff. Hence the bulletproof nine-inch suspended by one of John Taverna’s businesslike four-links, which also dramatically drops the Mustang’s ride height and allows its arse to swallow effortlessly the fat T/A 295/50-15 street radials Gary uses for cruising.

Even burnout champions need their comfort and, typically, Gary didn’t cut corners on the interior treatments the black car has received over the years

Why T/As? “They make lots of billowing smoke and go the distance,” Gary cheerfully boasts.

With a strong calendar of burnout competitions around the country, there are a lot of smart-thinking, tough competitors out there. Competition has become so fierce you almost certainly have to hurt the car to win.

Gary declares his 302 is as safe as houses to 7000rpm. But to secure the world title at Summernats 2000 he had occasionally to wring its neck to 8000. This is well and truly into hand-grenade territory, though Gary regards it as a necessary risk as the crowd always goes nuts over big revs.

So just when you thought you were homing in on the champ, he’s already thinking one step ahead. Unlike other competitors, Gary uses two line locks, a manual one that positively blocks all pressure to the rear brakes, and an electrically operated one to hold the front brakes on during static burnouts. 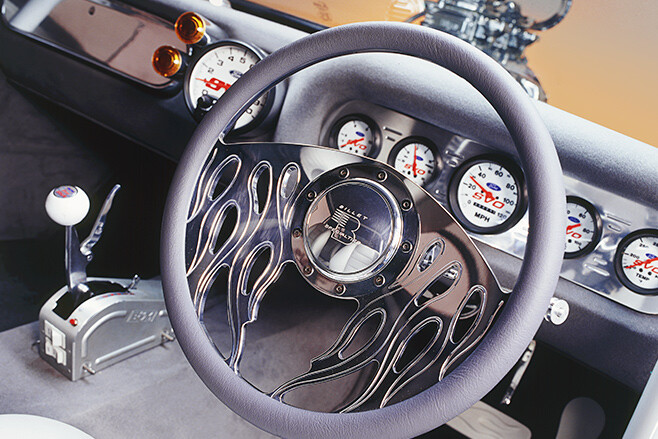 Using two line locks gives Gary the extra control he needs to place the Mustang exactly where he wants it, especially when he’s about to begin a series of doughnuts – it’s ultra-important to begin in the centre of the pad given how quickly vision becomes limited!

The Muzzy is and always has been a workhorse, and one a lot of people could learn a lesson or two from. It starts first turn of the key, doesn’t buck and scream at the first hint of traffic and gets more than one mile to the gallon, yet is an absolute weapon on the track and an even more extreme beast when cruising the streets.

As if to prove its adaptability, Gary’s long-term plan is to bolt in a sturdier roll cage, fit up a five- or six-speed ’box and wind it up over 200mph at the Lake Gairdner Speed Trials. Don’t happen to be looking for a passenger, mate?

Since Summernats, many people have been curious as to how Gary could have been so jubilant with flames licking out of his pride and joy. Truth be known, Gary was unaware of the inferno. A post mortem revealed that the exploding radiator smashed the fuel lines off the fuel pump, dumping raw fuel all over the shop. Sure looked spectacular though.

Gary Myers got his beloved black Muzzy onto the Lake Gairdner salt late in 2001 for four days of toil and, eventually, speed

While it’s unlikely Gary and his Mustang will end their 19-year partnership, there is however another Mustang in the wings. Gary declares it will be an off-its-head, hardcore, Pro Street ’66 Coupe, which he’ll show as well as campaign at the Nostalgia Drags.

No doubt it too will earn itself a formidable burnout reputation. All hail the champ!

12 Steps to a world-class burnout

1. Start with brand new tyres; old tyres won’t last the distance
2. You must drive into and out of the doughnut pad, use the full allotted time and make sure you pop both rear tyres
3. Traction will be good, so be wary of tyre width or the car will push
4. Don’t begin your burnout in the water as your car won’t start making smoke instantaneously
5. The crowd loves big revs, so keep your mill spinning hard
6. While the crowd loves reverse burnouts, they cost you points
7. Before you start doing doughnuts, make sure you’re in the middle of the pad, as vision can become difficult after a few rotations
8. Use a line lock to block any pressure to the rear brakes
9. Engage as high a gear as possible so your tyres are spinning as fast as possible
10. Don’t go too short on gearing, otherwise you’ll have to spin the engine to 8000rpm to get the high tyre speeds necessary to make the big smoke
11. Avoid any fluids on the track as the car will want to slide and over-rev and you’ll immediately lose smoke, which is bad
12. Keep going smoothly. Interrupt your run and it’s all over. You only get one chance!