Gary Satara’s blown XC-fronted XA Falcon coupe OVAKIL was one of the most famous Aussie street cars of its era. It was a significantly different build from most, with a blown 351 based on an ex-NASCAR block, Doug Nash five-speed and some serious smarts in the suspension and brake departments.  The engine now lives in Gary’s Jaguar XJS salt racer, while the coupe itself is safe in his garage. Let’s check out the full feature from the December 1986 issue of SM.

WANNA KNOW what real mean is? Take a long, hard and close look at this flint-tough dark blue ’72 XA Coupe. It’s a no-crap performance all-rounder bristling with the best pep-up goodies the wilting Oz peso can buy ... on either side of the Pacific. There are no engineering weaknesses. Motor, gearbox, rear end, brakes and suspension are all money-no-object track-tough. This same car was featured in Street Machine a while back. It was wild then and it’s a whole lot wilder now. Since our last look it’s scored a host of new gear to handle the stresses of supercharging, a bulletproof Doug Nash ’box and a competition floating rear end. The blown Falc has been dynoed with 500hp at 6000rpm. Add another 100-150hp for the nitrous...

Gary Satara’s king Henry isn’t like many regular street machines where the emphasis is on dress-up rather than hot-up. Doesn’t mean his immaculate streeter isn’t big on presentation. And there’s more detail work on the agenda. But Gary’s first and foremost a petrolhead and his car reflects his hardline attitude. “My car isn’t just a fashion accessory. My priorities were to make it a complete performance car, and strong and practical too, before making it look beautiful. He’s a bit peeved that some judges at street machine shows have failed to appreciate fully the grunt gear in the car he named Ovakil.

“Some judges don’t notice there’s a fully floating Harrop rear end with special axles,” says Gary. So to draw attention to the trick rear gear (from a John Goss Falcon), Gary says he had to chrome the rear end so the ill-informed would notice it wasn’t just another nine-incher. 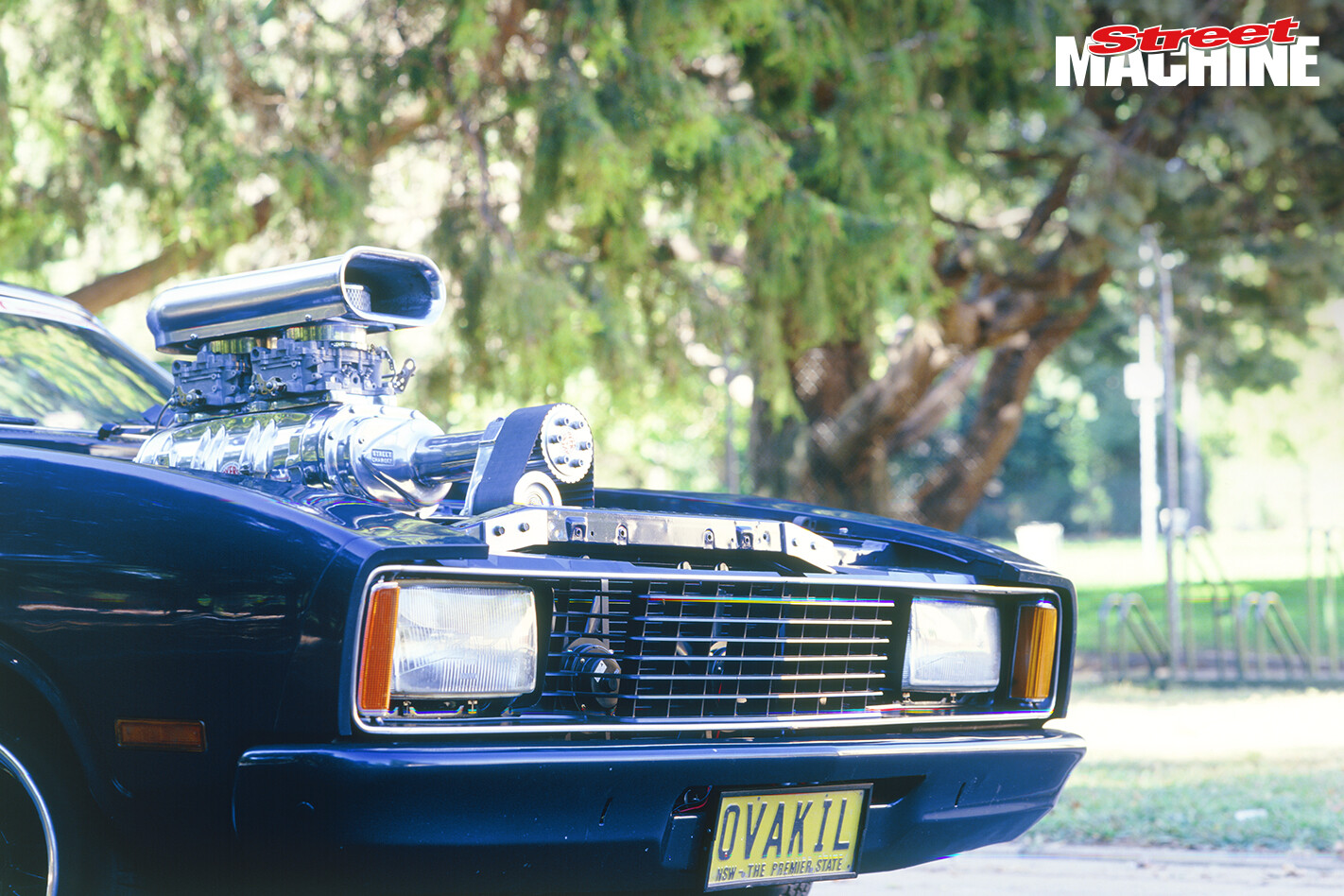 Gary went balls out to build himself a no-compromise car that could still be enjoyable on the street. The Pro Street look wasn’t for him. “They’re straight-line cars. Wheel tubs, coil-overs and four-inch front tyres are not for me. It wasn’t my cup of tea. I wanted the Falcon to handle the corners, and to stop as well as go.”

And go it surely does. With an earlier, milder engine, it handled the standing quarter in 10.1. That’s pretty bloody swift considering the disadvantages of street tyres and a manual ’box. Since then Gary’s gone ape under the bonnet. It took him more than a year to acquire all the vital organs for the engine. For this fella, it wasn’t simply a matter of flipping through a parts catalogue and buying the nice shiny bits. He wanted the best. After consultation with several acknowledged smarties in various specialist fields, Gary elected to take the supercharger route. His existing engine, though a good one (good enough to run 10.1, remember) wasn’t strong enough to take a blower. So Gary took himself off to the USA and sought out the experts. He brought home a pile of good gear to add to the mainly ex-Group C touring car stuff he’d been getting together locally.

Sydney engine whiz Ivan Walker, who builds Chevy V8s for sprintcar king Garry Rush among others, was handed the job of piecing together Gary’s box of magic tricks. The basis was a NASCAR 351 Cleveland block, the heavy-duty one designed for hard yakka. You know ... four-bolt mains and plenty of metal between the cylinders. It was bored to 30 thou oversize, align-honed and O-ringed. The oil passages to the lifter galleries were modified so as to restrict the flow of oil. A nitrided crank was also in the package. Custom-made Venolia 7:1 blower pistons, forged Crower rods and a Crower cam with 0.652in lift – all parts Gary secured in the States – are now part of the impressive engine specs. Pushrods are tried and trusted GT-HO. Harland Sharp roller rockers help hike the safe rev limit, and there are Crower triple valve springs, roller-tipped Crower lifters and titanium valve retainers. Intake valves are actually 4V titanium, while the exhaust valves are sodium-filled. It’s all the right stuff, folks. The good work continues up top, in the alloy heads. Originally designed for competition use back in ’69, they feature screw-in studs, guide plates and a port and polish from Superflow heads.

Offenhauser, a proud Yank name long associated with Indianapolis success, provided the tunnel-ram manifold. The blower is a Dyers 6/71, a choice made after discussions with the Dyers people. It’s set up to run an easy-does-it six percent overdriven. Carburation is recalibrated twin 750cfm Competition Series Carters. The Carters are the end of an impressive fail-safe fuel system that includes twin Holley Blue pumps and a couple of chopper fuel filters. The fuel tank is from another John Goss Bathurst racer. Headers are Pacemaker two-inch linked to a handmade competition-inspired system that neither restricts power nor the glorious V8 music. For those who like their grunt delivered in smart wrapping, there are also Moroso gold valve covers. And braided lines (Earl’s, Russell, Aeroquip), but they’re serving a practical purpose. A Mallory Unilite distributor, Pro Master coil and Accel leads take care of the ignition.

Gary doesn’t have a lot of affection for slushboxes, so it’s no surprise to learn he’s insisted on a manual shift. “It’s a Doug Nash 4-plus-1 quick-change five-speed competition ’box, which is ten times stronger than the more expensive Getrag unit used in Bathurst Commodores, Jaguars and BMWs.” The fully floating rear end Gary is so rightly proud of (despite the indifference of show judges) has a Ford nine-inch Detroit locker running 3.5:1 gears, rugged 31-spline Hi-Tuff axles and anodised alloy hubs. Completing the tough act are chromed ladder bars made by fabrication king John Taverna and set up by Jock McLeod. Gary’s protecting his investment and his own hide by stretching the high-performance approach to handling and braking. He went to a deal of trouble adapting four-spot Jaguar XJS calipers to fit the rear discs, but the results made the effort worthwhile. Girling pads are used all round. Former Falcon touring car regular Garry Wilmington helped the Satara Ford project in many areas, not least in the handling department. Springs from Wilmington’s old race Falcon now do duty in Gary’s mean machine. Damping has been uprated with Pedders Sports Ryders at the front and KYB eight-way adjustables on the rear. And now there’s a front/rear mix of Avons and BFG Comp T/As, on 10-inch-wide Simmons wheels.

With this extensively revised, and obviously far tougher engine-transmission-rear end set-up, Gary couldn’t wait to take a blast down the strip. He was in for a helluva shock. The clock stopped at 10.8, or 0.7sec slower than before! There was a simple explanation. The original T/As, fine street tyres, simply couldn’t handle the effects of 500 untamed horses. Gary lit ’em in first ... and second ... and third. Wonder what might have happened if he’d dialled in the laughing gas? Anyway, the problem has been solved. A pair of slicks will be on the car next time Gary Satara cuts loose with his bitchin’ blown street rocket. And a nine-second pass seems inevitable.