WHEN Stuart Speck was invited to MotorEx 2012, his reaction wasn’t what you might expect. 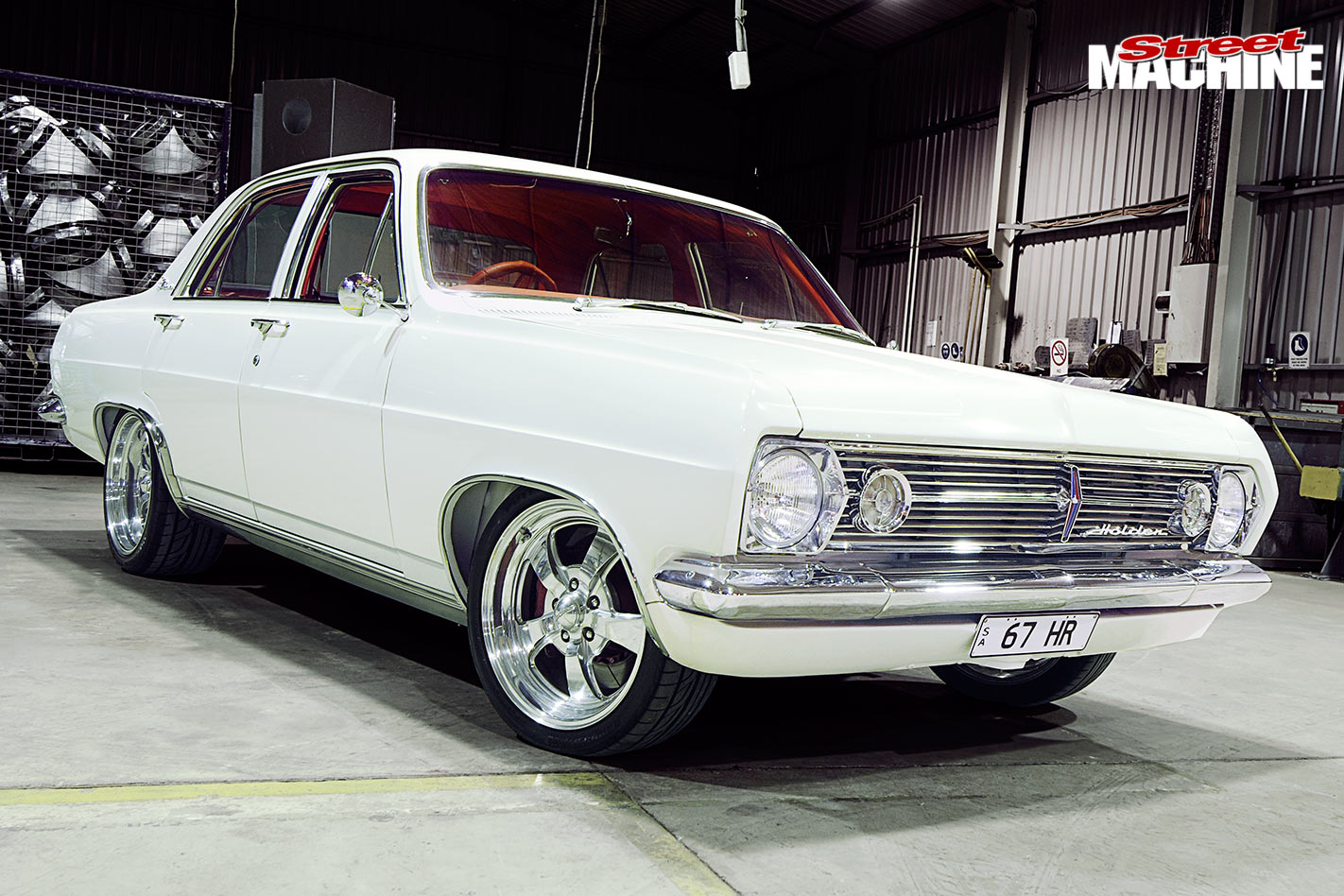 “I might not go,” he said after his Pro Tour-style ’67 HR Premier picked up a raft of trophies at Adelaide’s 2011 Extreme Auto Expo. “I’m not into all of this stuff. I just built my HR Premier the way I’d always wanted.”

His way meant a stonking V8 in a tough streeter that was legal enough to wear a rego sticker.

“When I was a teenager, my oldest brother had a stand-out white six-cylinder HR Premier. The pinnacle for us at the time was to have an HR with a V8 in it — they were the envy of everyone.” 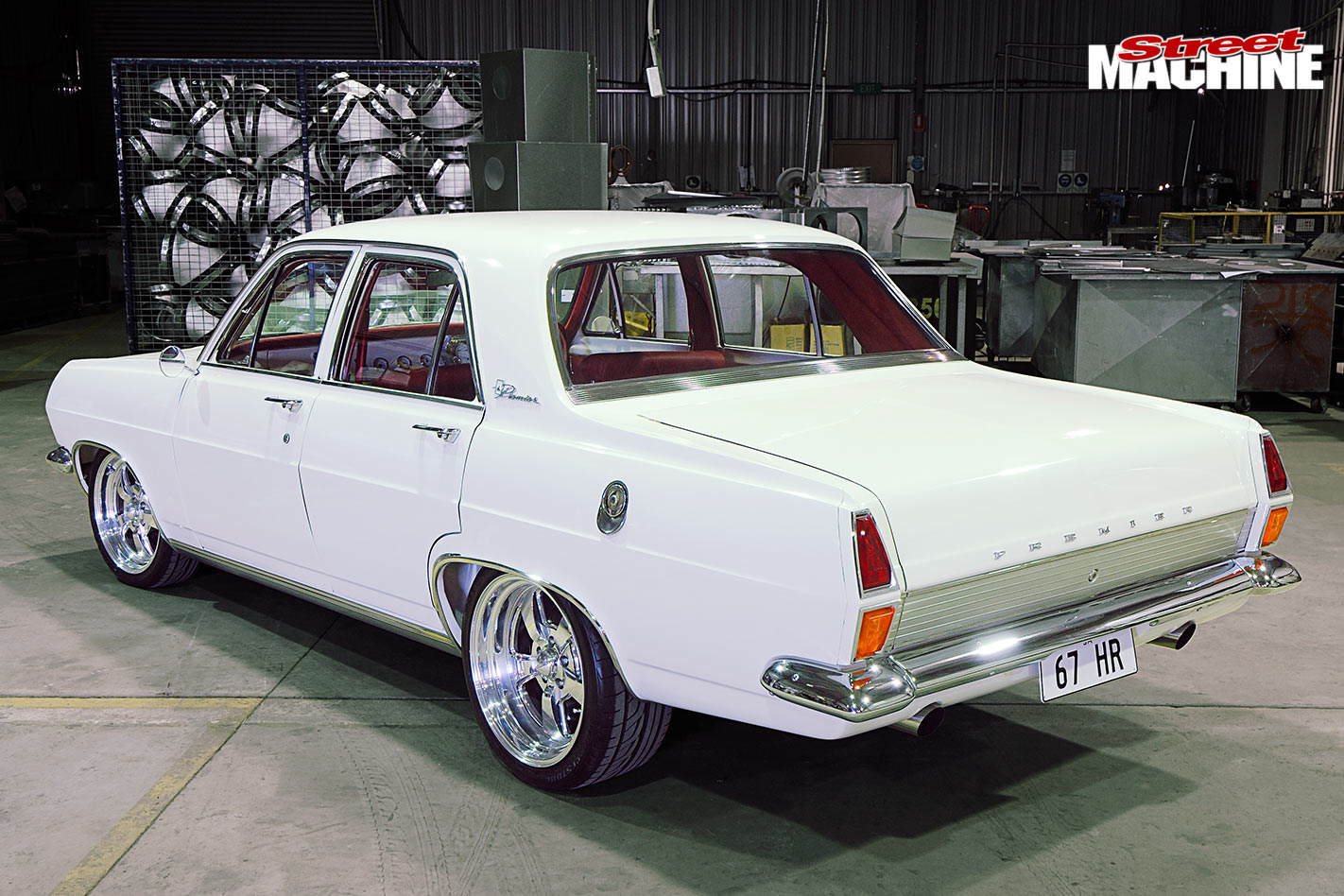 “I found the HR locally about four years ago,” he says. “It was an $800 rust bucket and in hindsight, I should’ve bought something in better condition.”

Realising he was a little out of his depth trying to go it alone, he entrusted Graeme and Trish Parmenter’s Queensland-based Oz Rods with the project, with a brief to stay true to his own vision.

Complementing the pristine underside is the gorgeous bodywork, where pretty well all of the old metal was replaced.

“Externally it had to be white and look stock,” he says. “And I didn’t want an old 308 under the bonnet; I wanted the performance, driveline and interior to be based on the HSV W427 I have sitting in my garage.” 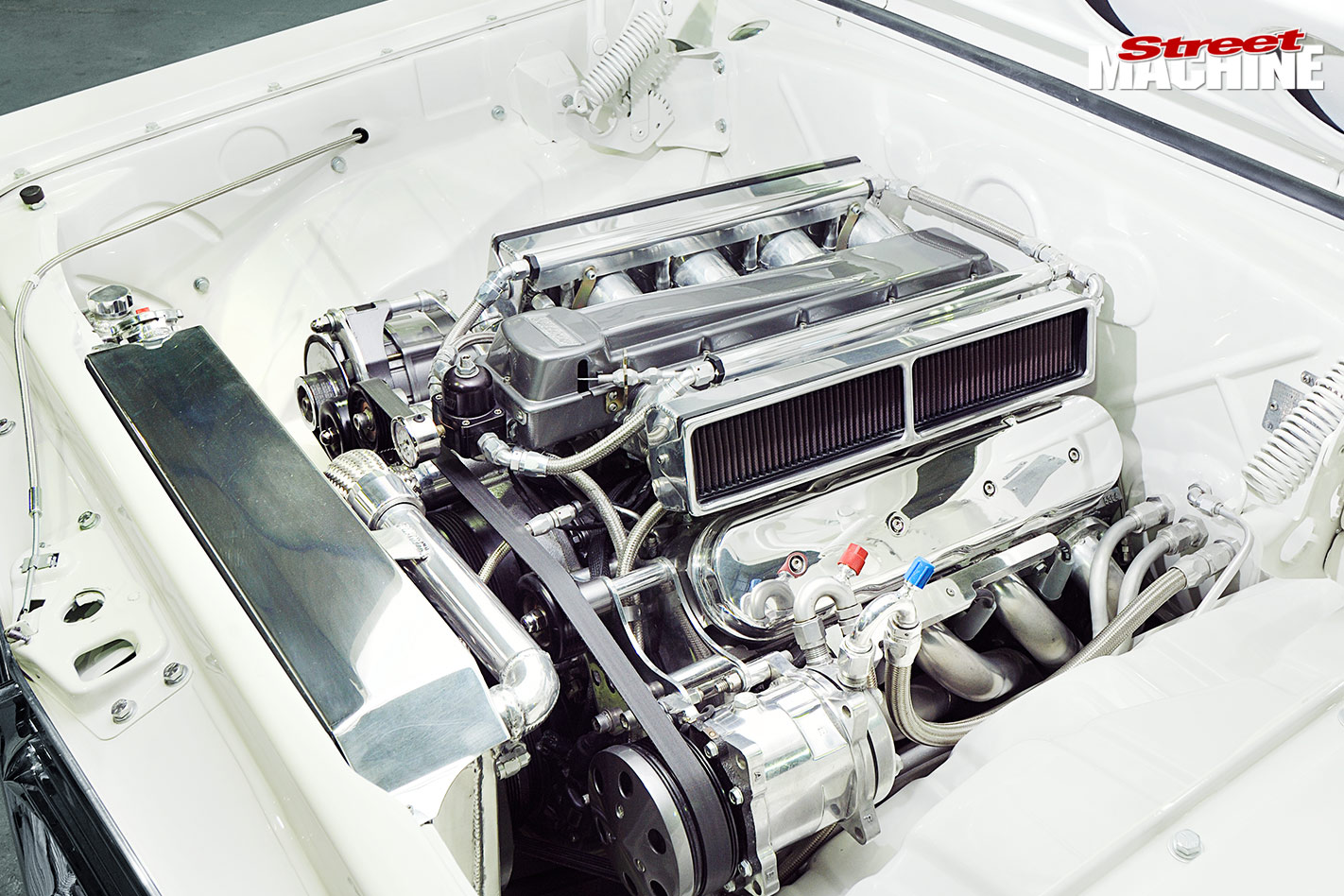 The Harrop Hurricane manifold was modified to suit air cleaners and the coilpacks were relocated under the exhaust, at the front of the engine. “The exhaust was an issue. Years ago we’d take it out through the inner guards but for rego you’ve got to keep everything inside,” Graeme explains. “We custom-made the headers and 21/2-inch system in steel, then HPC coated it”

Other prerequisites were a tidy engine bay, a nine-inch diff, four-wheel discs and a new fuel tank. Not an easy build in anyone’s language, especially when the overriding instruction was for it to be street-legal. To do that they had to make sure the car could cope with the projected power output.

“We did a torsion and rigidity test to start with, which was a first for us,” Graeme says. “From that we knew what strength had to be added. Next we made our own chassis strengthening kit which was sunk into the floor, to look part of it.”

Then they got stuck into the suspension. 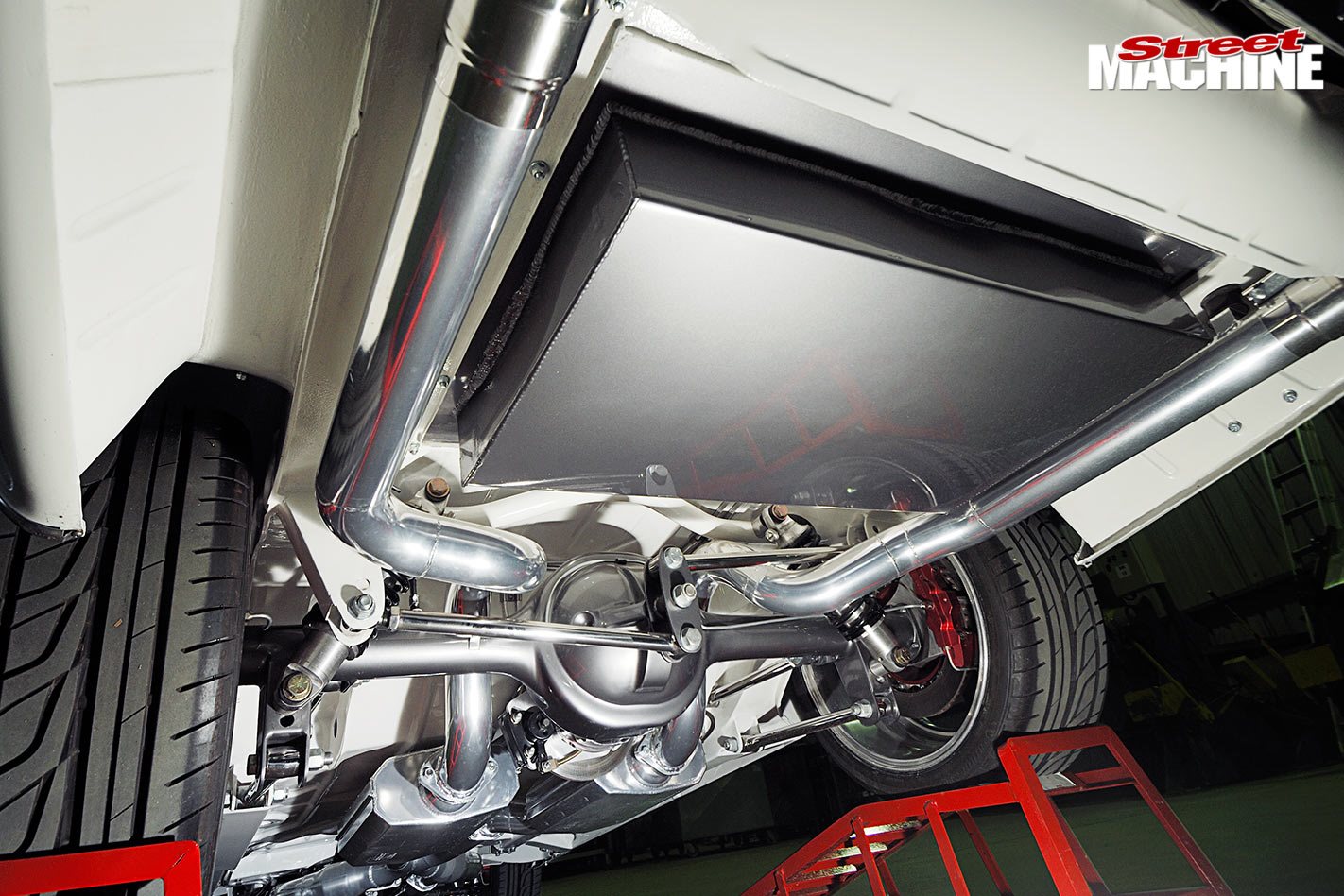 Oz Rods ran the fuel and brake lines through the body, keeping the undercarriage super-clean

“They were about 80 per cent complete building the original HR front end when Rod Tech’s EH/HR front end was approved and compliant for road use,” Stuart says. “So they scrapped what was done and changed to that instead.”

Graeme then suggested that the rear should match, so an Oz Rods-built custom four-bar and Watts linkage now reside under the symmetrically aligned undercarriage.

We put in new doors, bonnet, boot and floorpans,” Graeme says. “There wasn’t much on it that was any good and only the lower half of the firewall could be reworked ’cos if we’d cut the original body numbers out of the top, there’s no way it’d get rego.”

PPG Atlantic White was flowed over the arrow-straight body, and then it was ready for a new interior. Kev’s Kustom Auto Trimmers reshaped the HR Premier pews, adding some luxury with Ferrari Red cow skin trim and suede roof lining.

Both the tiller and column are Flaming River, while the original HR dash is filled with a raft of subtle modern additions such as keyless ignition, air con and a stereo. The Classic Instruments USA gauges look like factory options.

Stuart’s list of must-haves continues in the engine bay where you’ll notice there’s a swag of necessities not in their usual spots.

“The brake booster, master cylinder and wiper motor are all under-dash,” Graeme says. “The two small alloy buttons under the bonnet, up near the wiper vent, are the relevant reservoir fillers.”

SA’s draconian rego power restrictions limited the engine size to 350ci, which meant Stuart’s dream of parking a street-legal 427ci under the bonnet was a no-go. Instead he went with an LS1, which is still a massive upgrade over the 186ci six that HRs left the factory with.

Backing up the Chev is a bulky VE HSV T-56 six-speed manual, assisted by a PBR heavy-duty clutch. A three-inch tailshaft then turns the 3.5 gears and 31-spline axles inside the nine-inch. 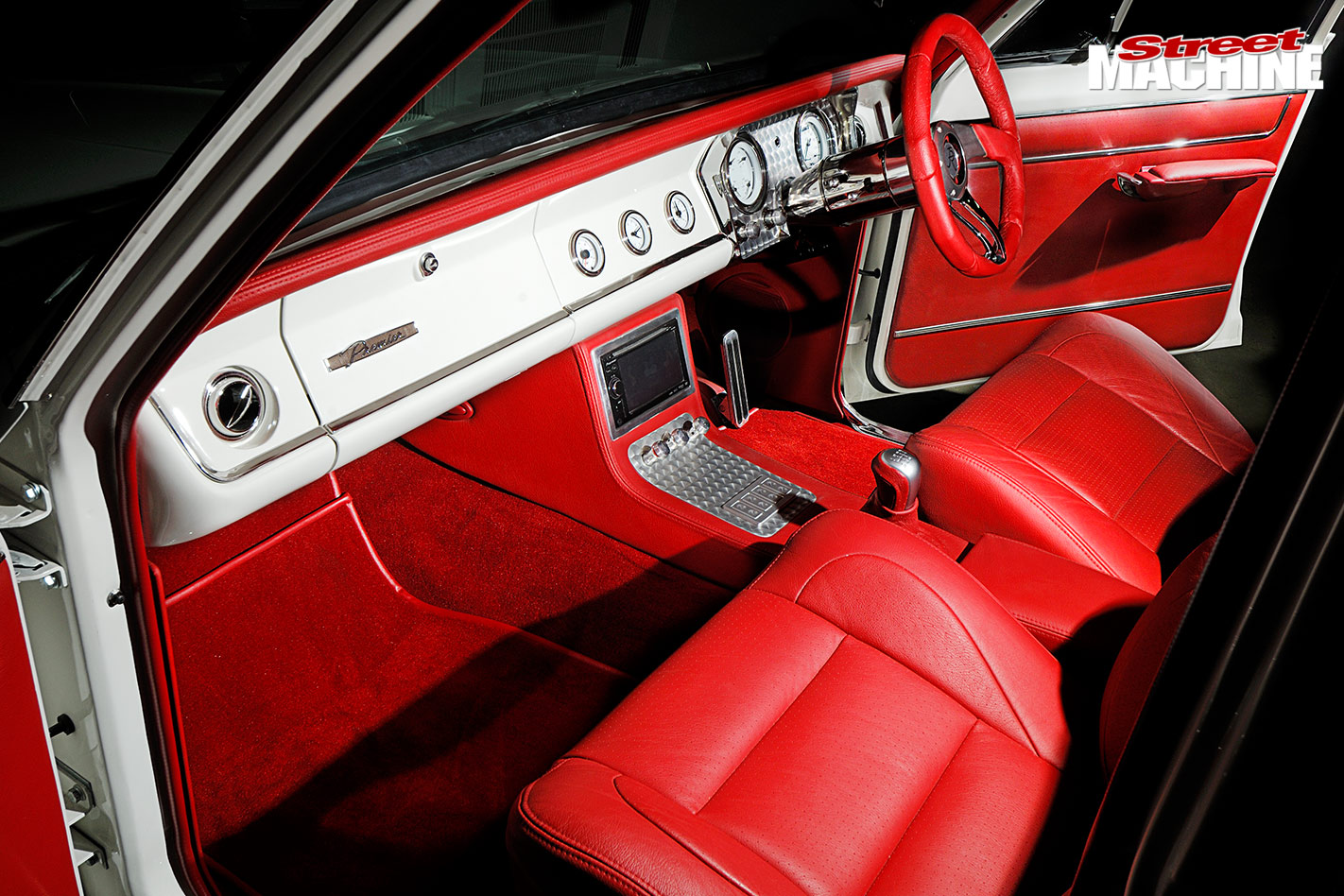 Stuart did get exactly what he wanted in the braking department, with stonking GT Racing discs all ’round. Whopping six-spot calipers live under the nose, with four-spots at the back. They’re fed by separate front and rear Wilwood cylinders hidden in the boot.

Covering the discs are Center Line Legend Retro rims, 17x7s up front and 18x9½s filling the tubbed rear — this is not your nanna’s HR Prem.

Before Stuart got the keys to his stunningly executed HR, Oz Rods made sure that the engineering was complete on the two-year build.

“We took it to the Paul Morris Driver Training Centre to do lane-change and brake tests,” Graeme says. “It had to do 80km/h to pass but the engineer, Tim Bartop (HQ Monaro SM, Jan ’12), was doing 120km/h and it still didn’t break traction. The report shows that the HR performs better than an HSV vehicle.” That’s impressive.

More importantly it satisfies the owner. “It all turned out as I intended. I wanted a performance car and it handles well, brakes and goes reasonably hard. It’s the package.” 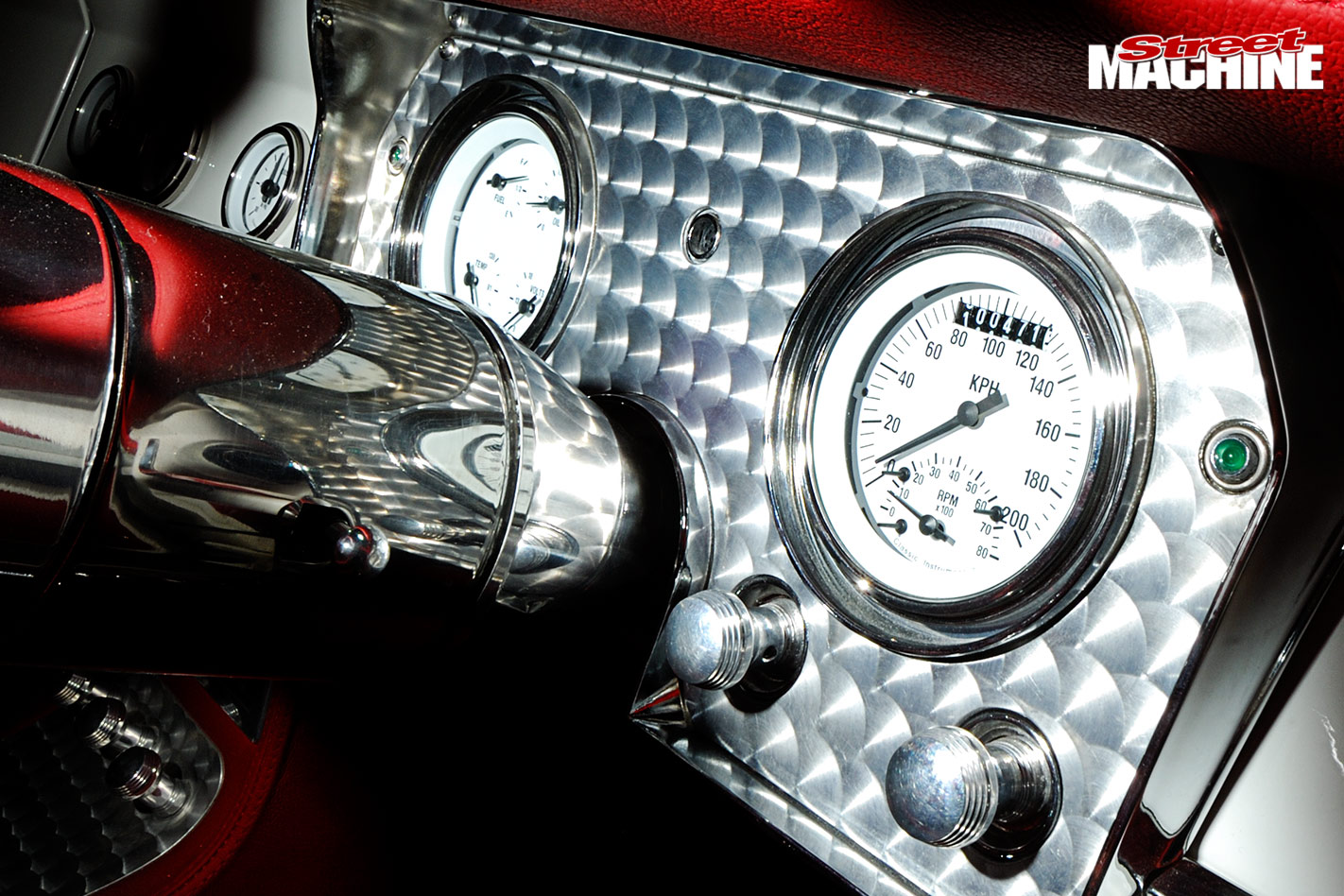 No key — a headphone-like plug goes in the console, then you press the start button. Modern niceties include 60s-look electric window and central locking switches and a/c knobs

As for the show side of things, Stuart says: “I wasn’t going to show it because I always planned on driving it. I’m not into polishing cars all day but as the build progressed it lent itself to be shown.”

So he entered the Extreme Auto Expo in 2011 and duly earned an invite to MotorEx. Since then Stuart’s had a think about the whole show scene and as he eases away from his working life, he’s had a change of heart.

“I am going to take the HR to compete in the Meguiar’s Superstars at MotorEx as a one-off. Now that I’m semi-retired, I can do it.” 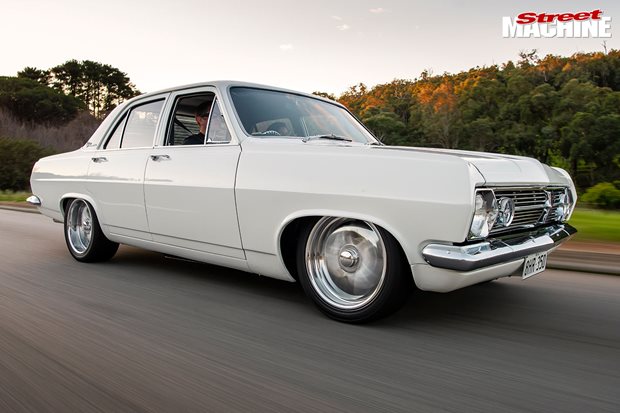