There are plenty of tall tales about 'one-off factory specials', but this Ford Falcon XW GS panel van is the real deal

HOW many times have you heard stories of ultra-rare, one-off factory-built specials that turn out to be nothing more than a myth or urban legend? Well, this incredible panel van is no myth, it’s a bona fide one-of-one, special-order XW GS panel van that rolled off Ford’s production line in September 1970. 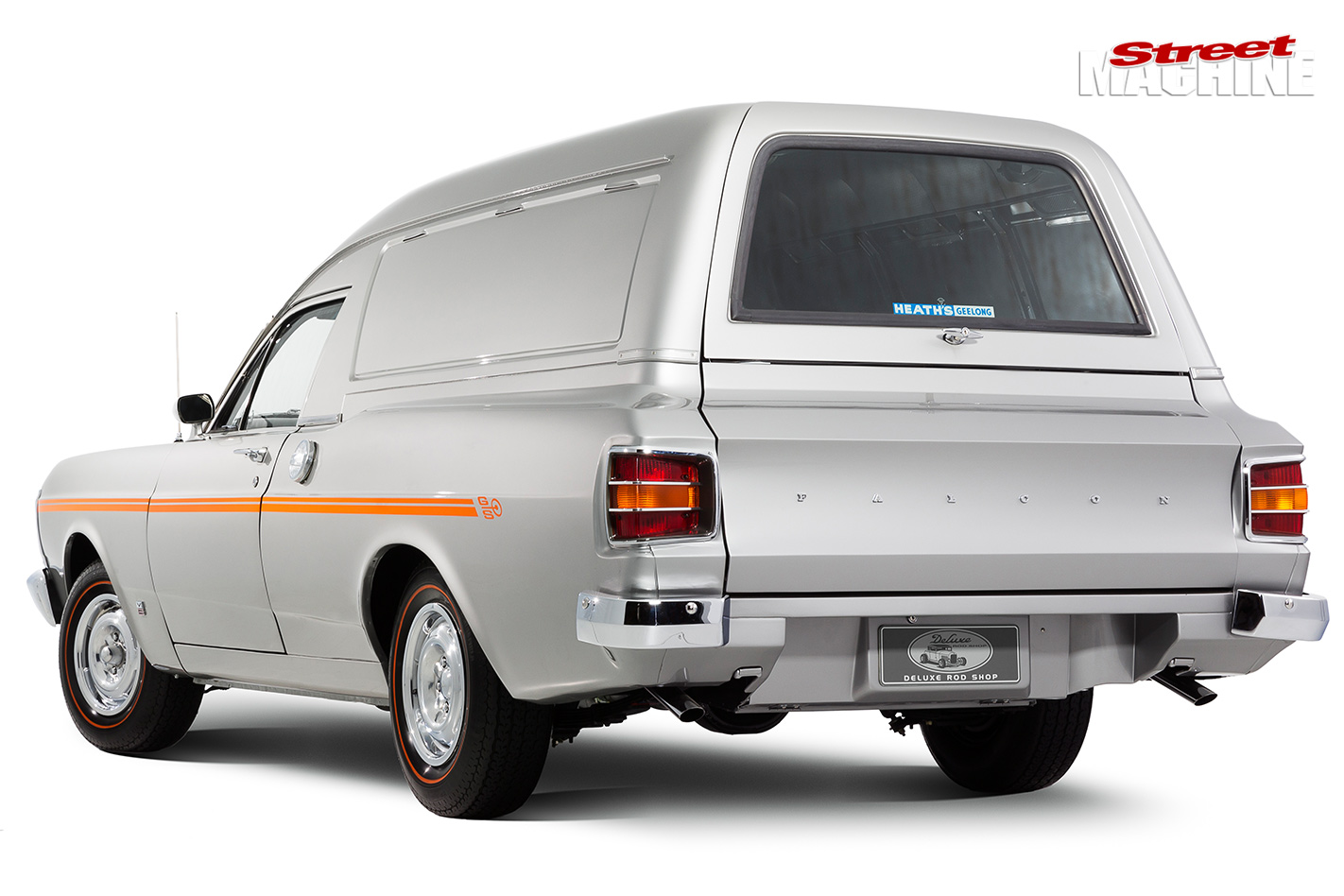 John and Deluxe’s quest for originality was extreme. The wheels, dress rims and ER70H14 Kelly Springfields, along with myriad other pieces, are NOS. The original side mirrors were repaired, painted and fitted with custom-cut glass, as the reproduction versions look slightly different

The story goes like this: Melbourne’s Doak family managed to convince Heath’s Motors Ford in Geelong to order – and then Ford Australia to build – a unique XW van, equipped with all the factory GS goodies. Ford was reluctant, but the Doak family were very persuasive. They traded-in their near-new 327 HK Monaro to finance it, and in the end 20-year-old surf-mad Bruce Doak got his dream machine. 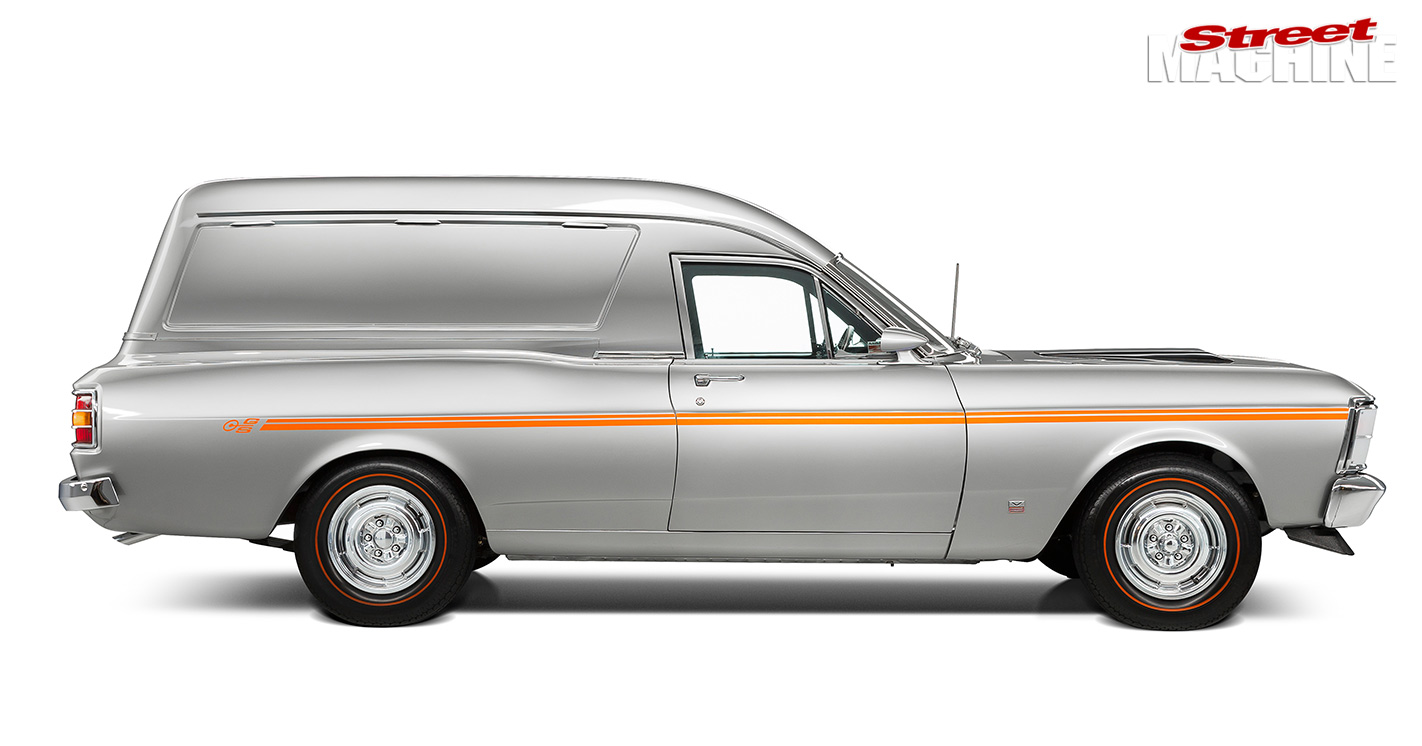 The van differs in only two ways from when it was bought new in 1970. Back then it rolled on US Indy mags instead of the steelies and dress rims, and it never sported a front spoiler. Yet when original owner Bruce Doak checked it out, he commented: “I always wanted a front spoiler, but never got around to fitting one”

The Silver Fox van was registered (KSA-714) on Friday, 11 September 1970, and delivered through Peter Wright Ford, Footscray. It was so against Ford policy, they made the Doaks sign a paper stating they wouldn’t sell the car for two years. 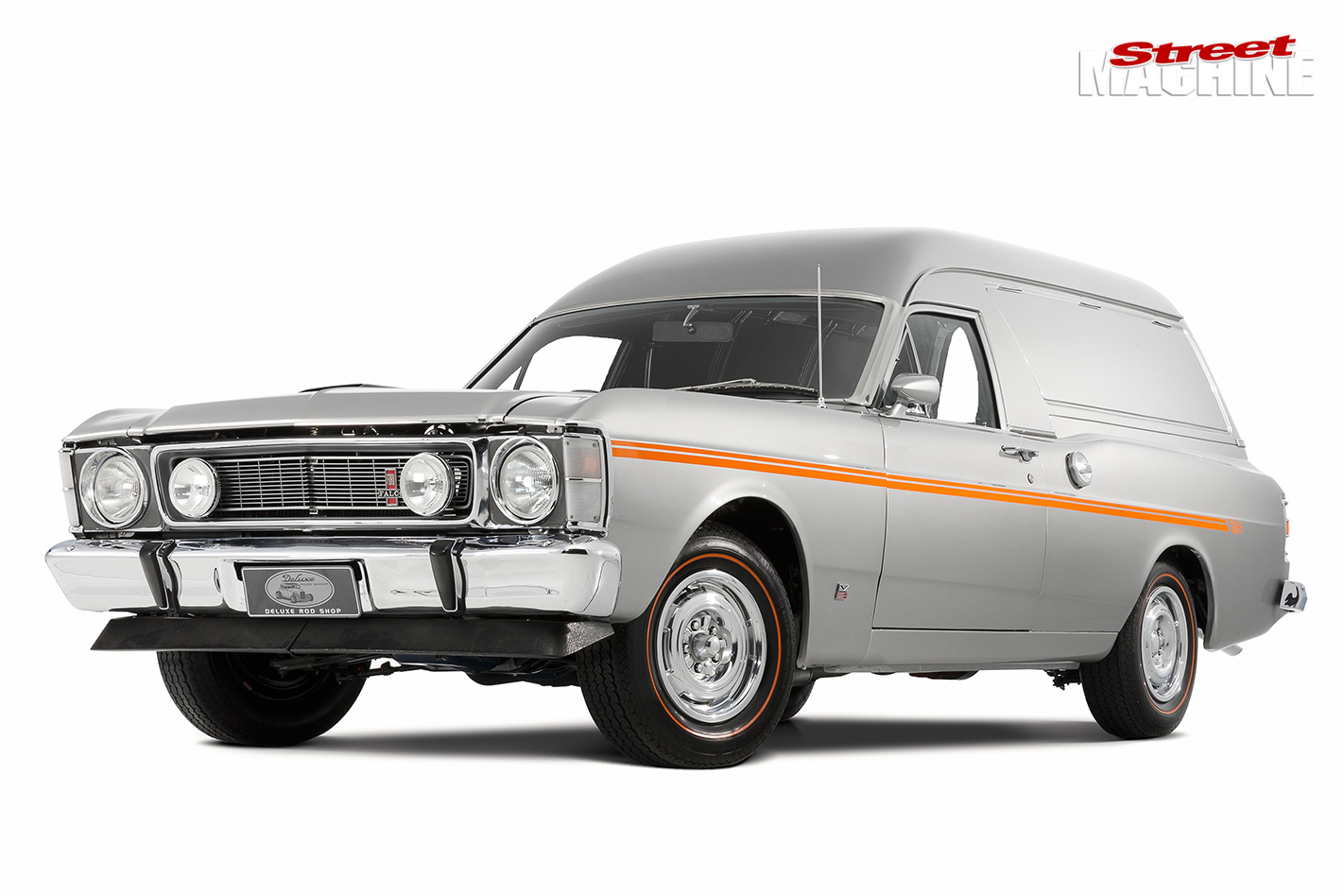 John was particularly fussy about getting the correct colour, with Deluxe using an unrestored Silver Fox XW GT to get a perfect match. John forbade the Deluxe boys to cut-and-buff it flat, as that wouldn’t have looked original

“I picked the car up Friday and christened it Friday night,” says the now 65-year-old Bruce Doak. “Cracked the underside of the console lid on that first night.” 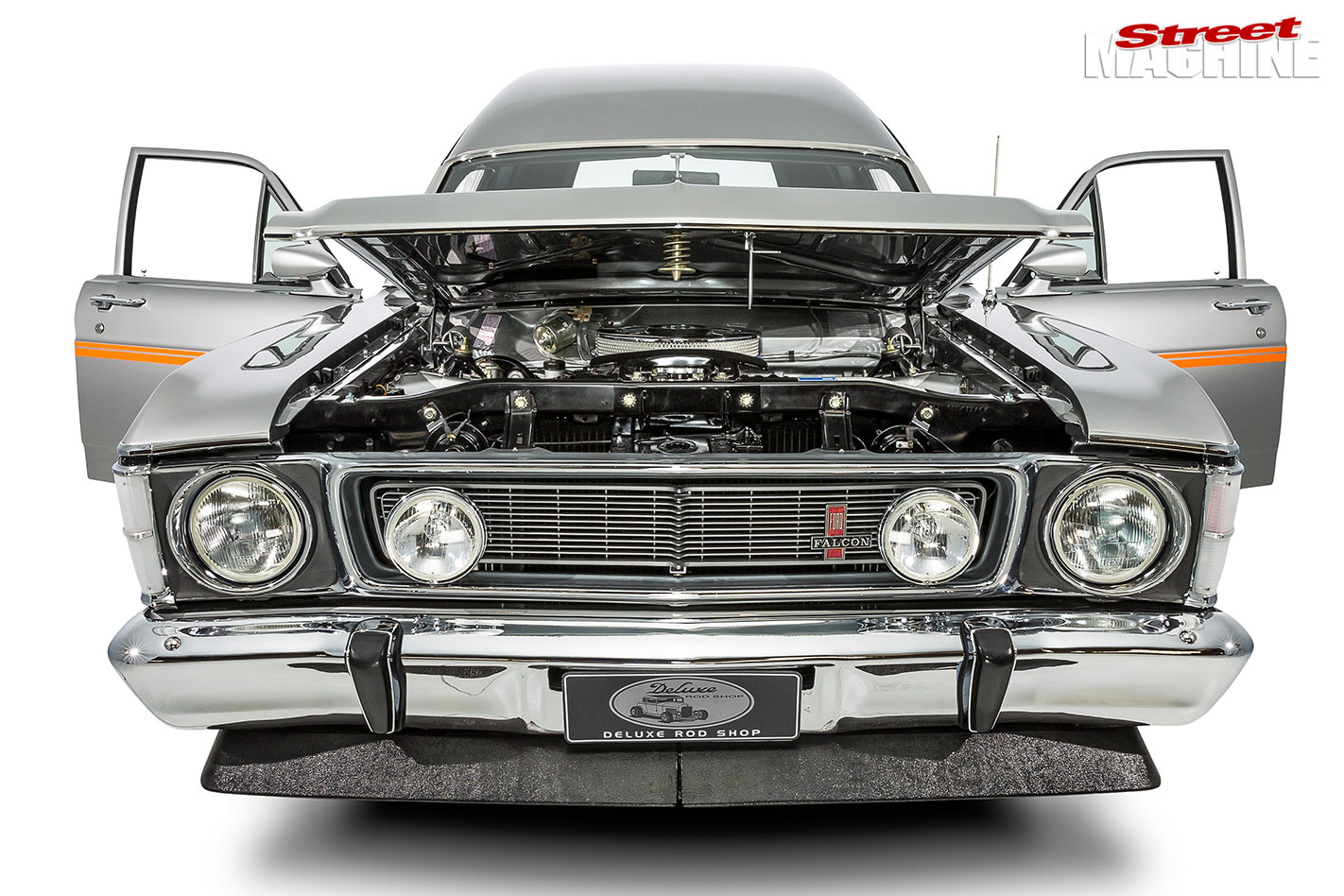 The GS van served as Bruce’s work truck, getting loaded up with carpet during the day and surfboards every weekend. Close mate Terry Klemm, of Klemm-Bell Surfboards, also used the van in one of the company’s ads back in the day. 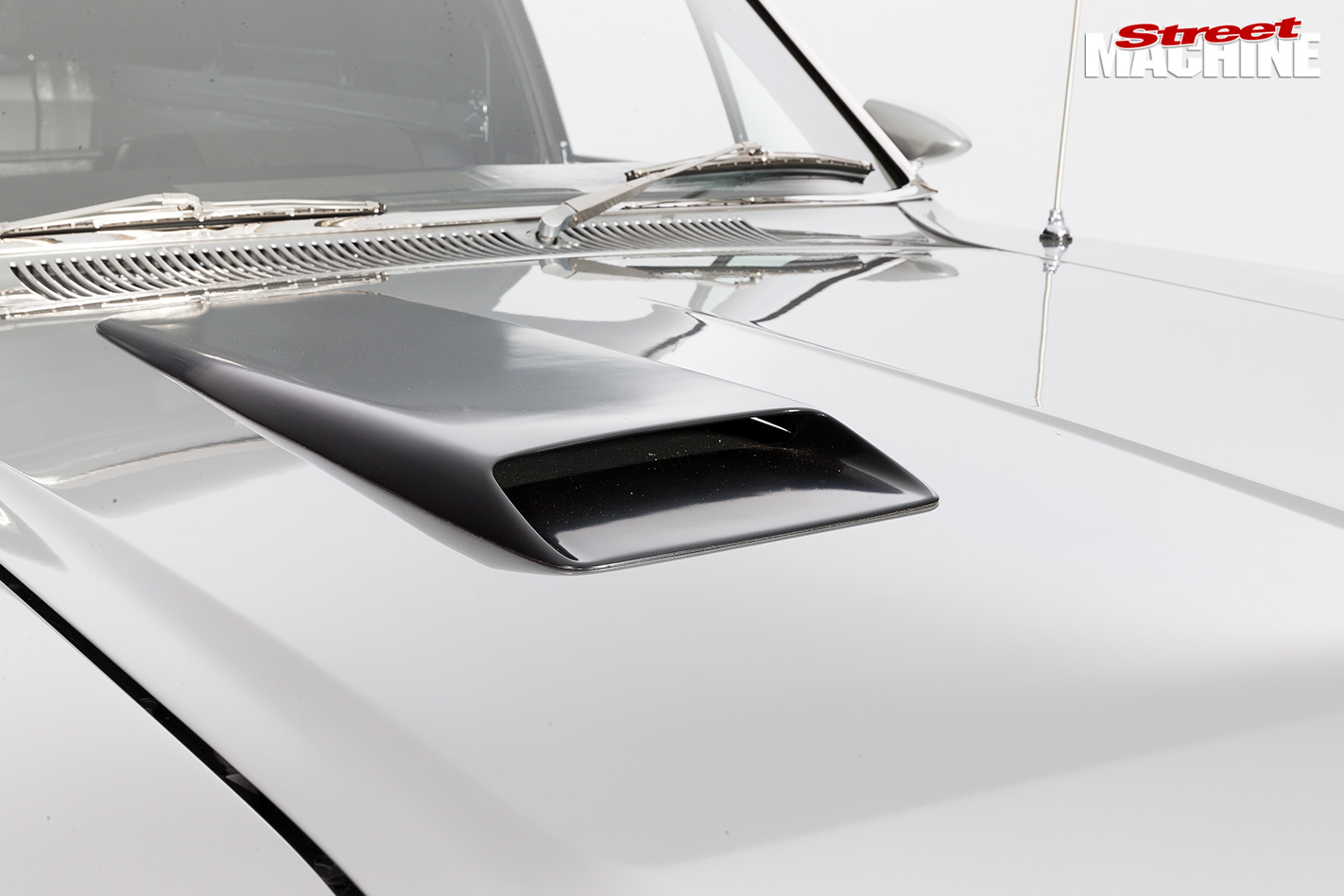 After a hard life, it was parked up in 1975. Unfortunately its time in storage, followed by a handful of other owners and a couple of dodgy repairs, wreaked havoc on this rare piece of Australian motoring. Enter the current owners: Jan and John Basso. 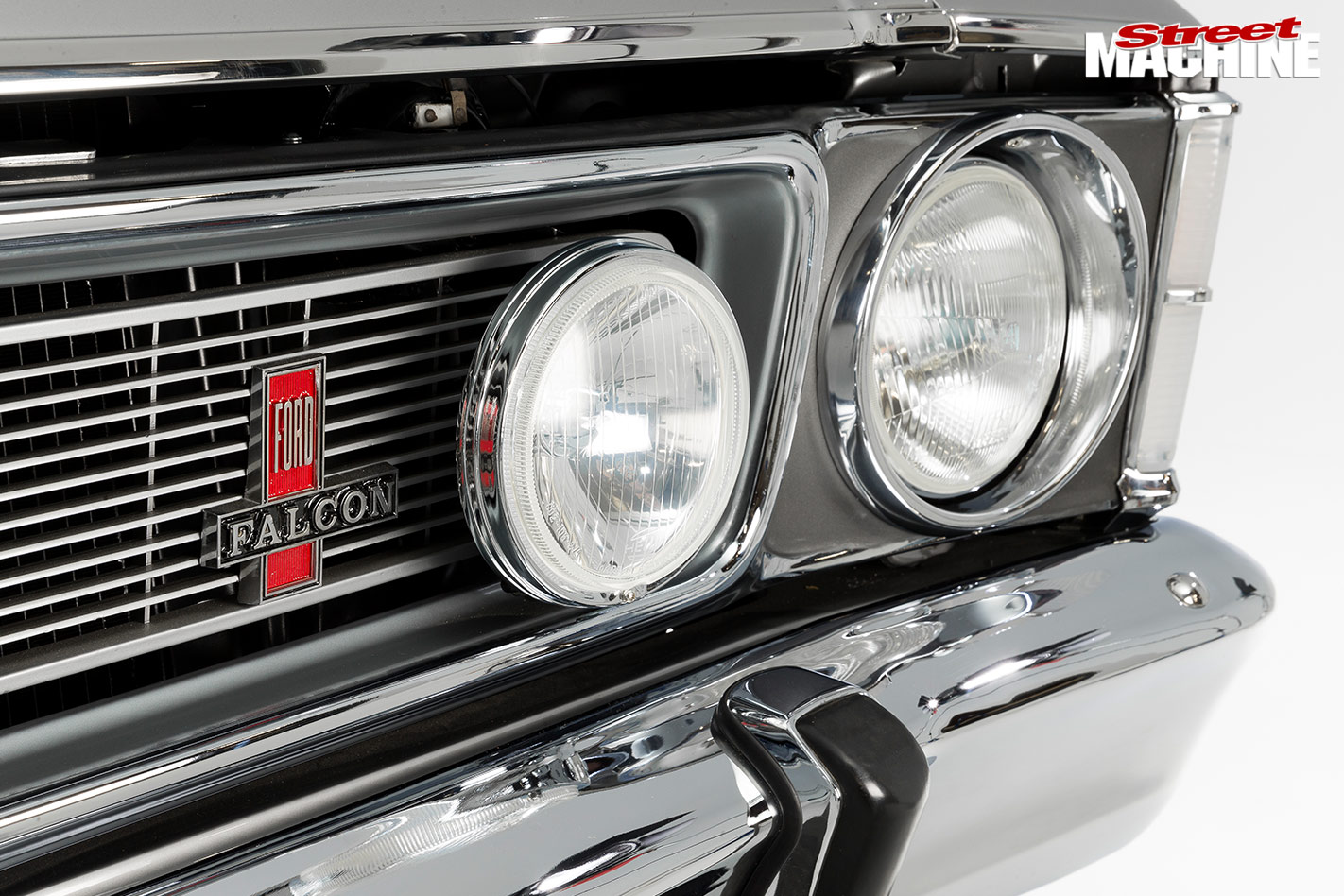 The Bassos are well known as custodians of Peter Brock’s famous 1972 HDT GTR XU-1 Torana. John has also been a Falcon GT fanatic for over 40 years, amassing an amazing car collection, along with a treasure trove of new old stock (NOS) parts. 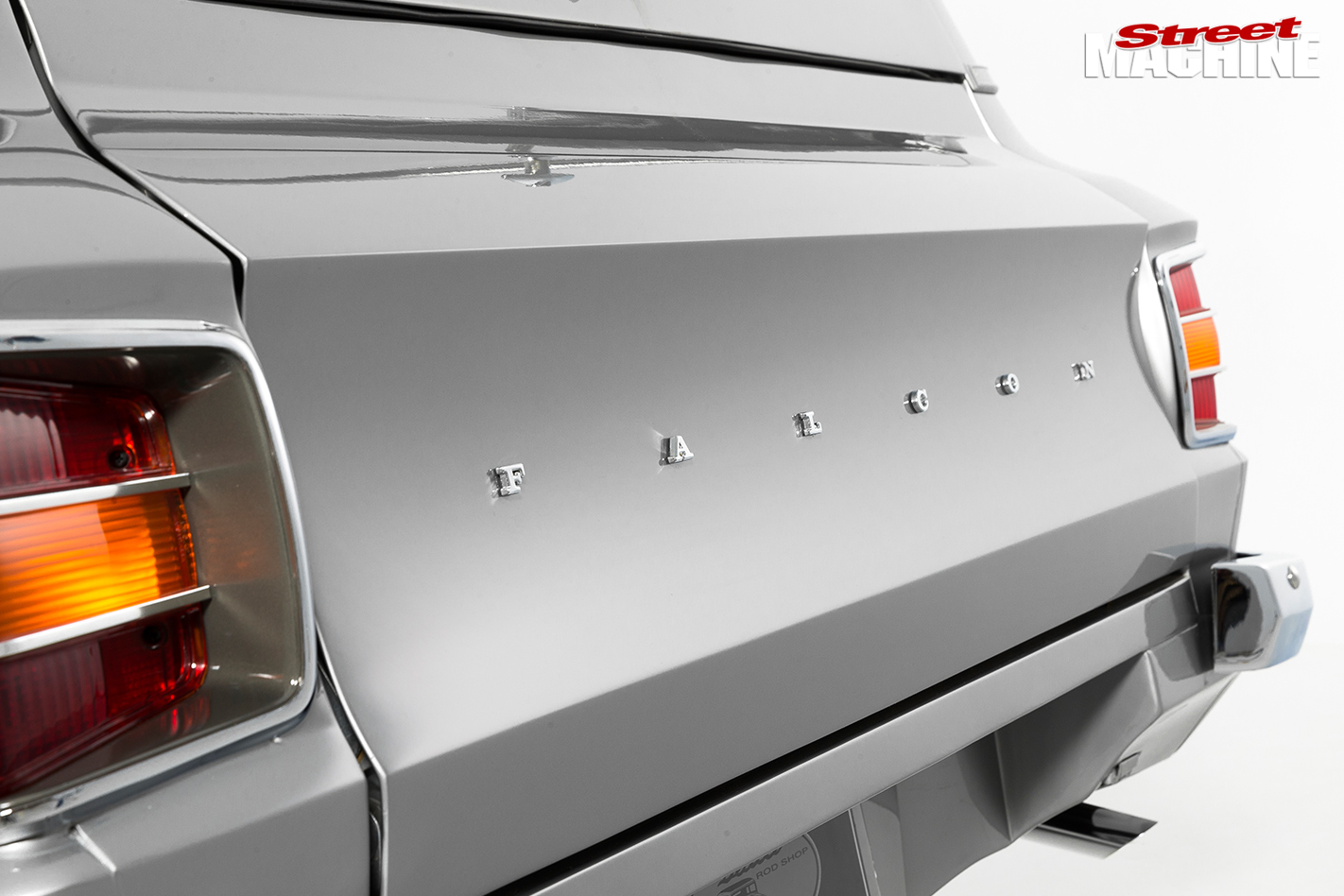 John had seen the craftsmanship that Steve Alldrick and the crew from Deluxe Rod Shop had put into Anthony Newman’s EH Holden (SM, Dec ’12), and decided he wanted the same for the XW.

“It was very rough,” Steve says of the van’s condition when it first came to him. “It had a lot of rust, with bog an inch thick in places.” 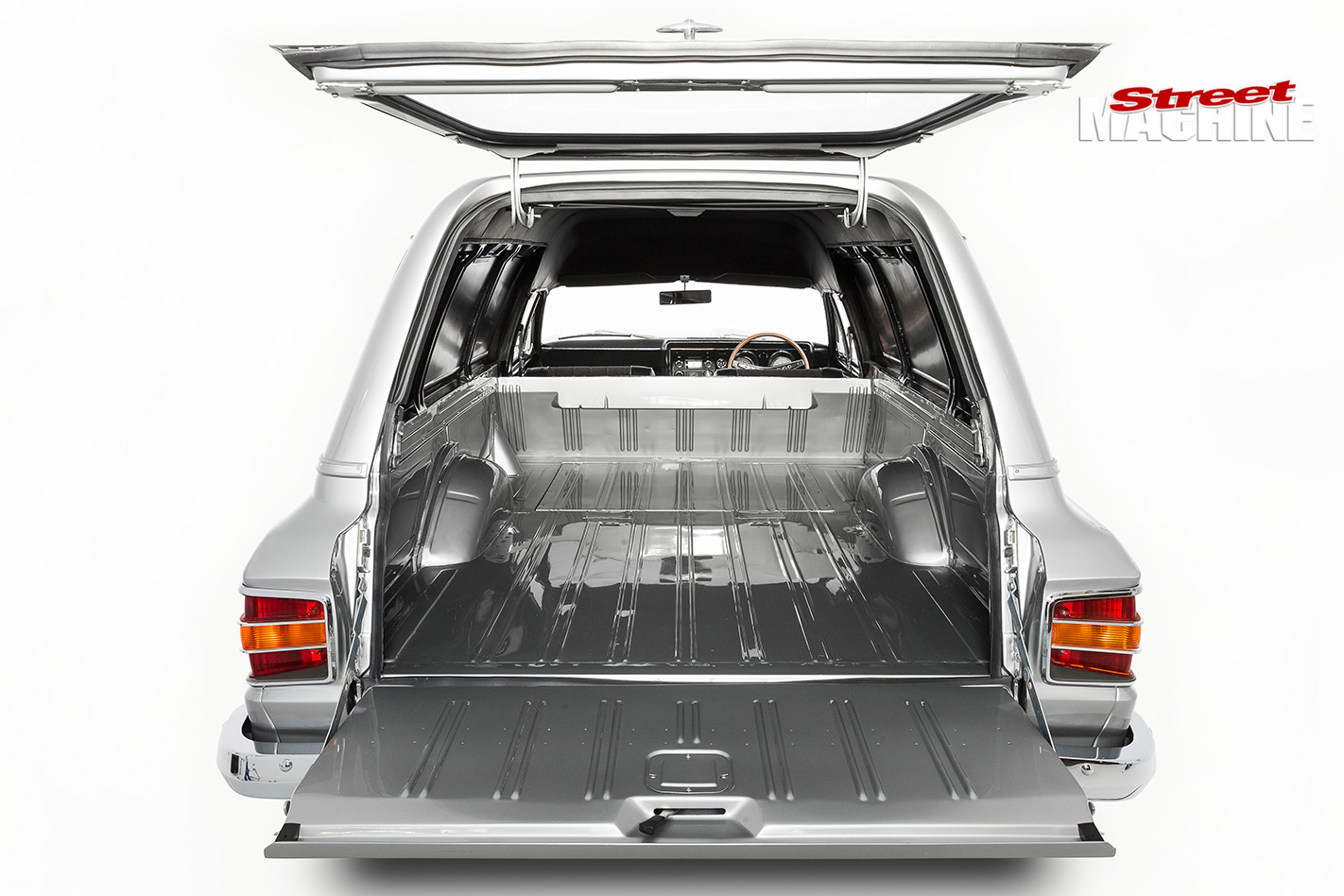 Despite being used as a workhorse, the van’s cargo area was in remarkably good condition. Most of the dents were smoothed out with deft hammer-and-dolly work

Oddly, the normal XW/XY rust areas were pretty reasonable – instead it was like it had corroded from the outside in. Deluxe set about replacing all the rust-riddled tinwork, unpicking both quarters to repair the inner structure. A complete lower half for one quarter (along with many other body sections and structural pieces) had to be fashioned from scratch. Three solid weeks were spent stitching together three different sets of wheelarches to create one mint set – only for Rare Spares to release reproductions a short time later! 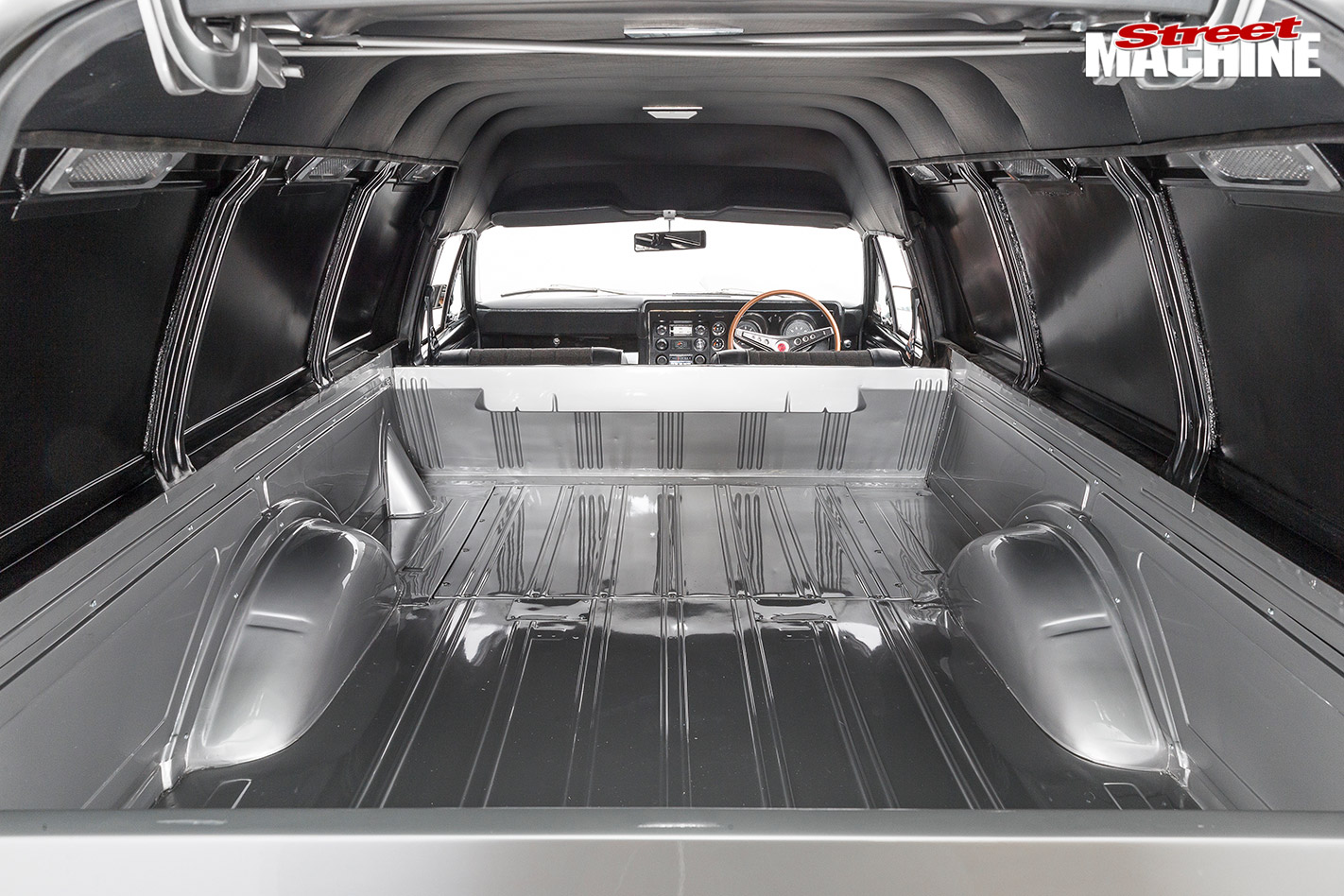 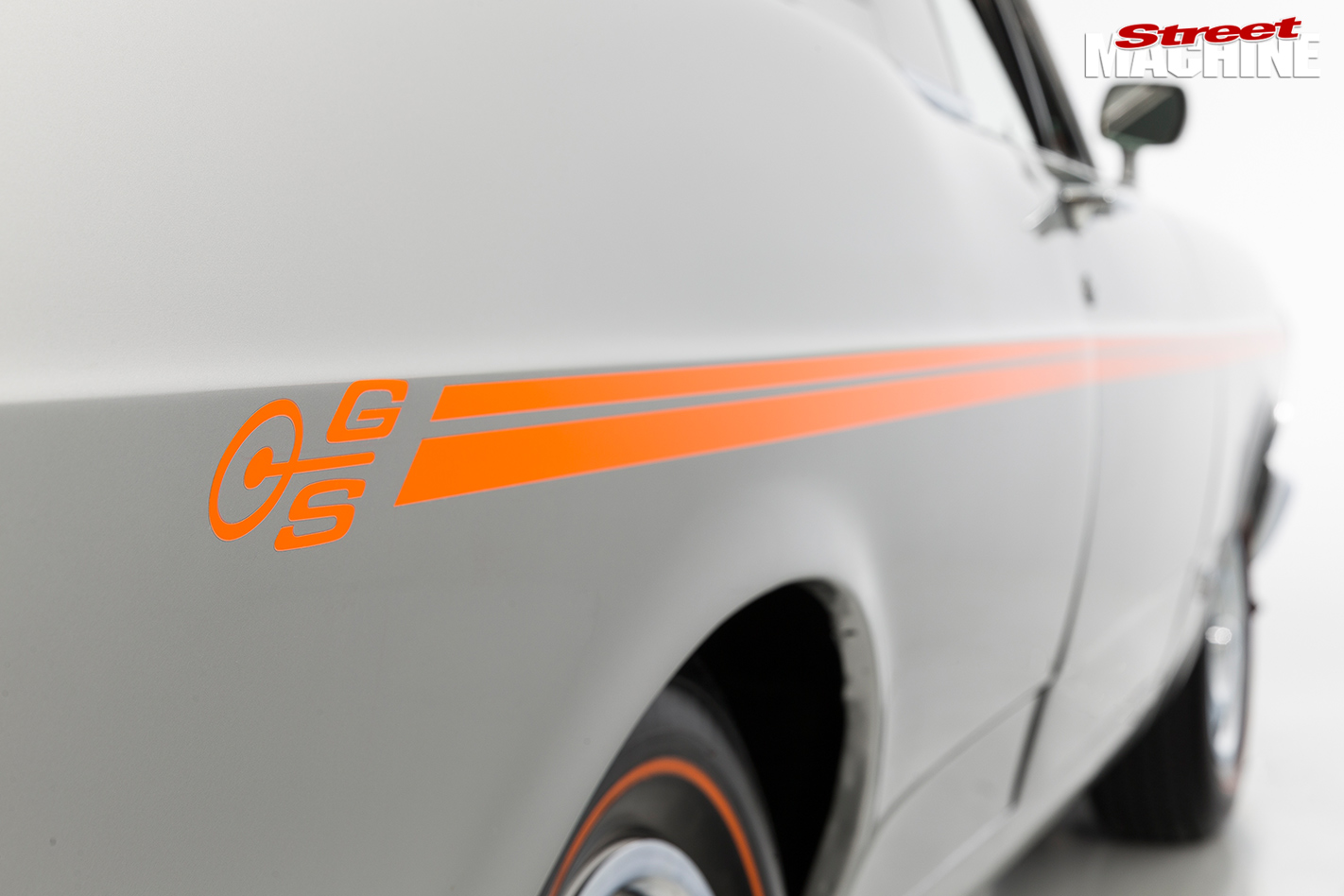 Every original paint marking, chalk assembly mark and decal is factory-perfect. Over-the-top attention to detail like this consumes massive hours – yet at a glance the van simply looks stock

Trevor Davis was a case in point: Trev had an NOS XW grille and bonnet scoop he wanted $2000 for, but John had an original, unused Dunlop Aquajet that Trevor wanted for his GTHO Phase III – they traded at high noon at an undisclosed location. 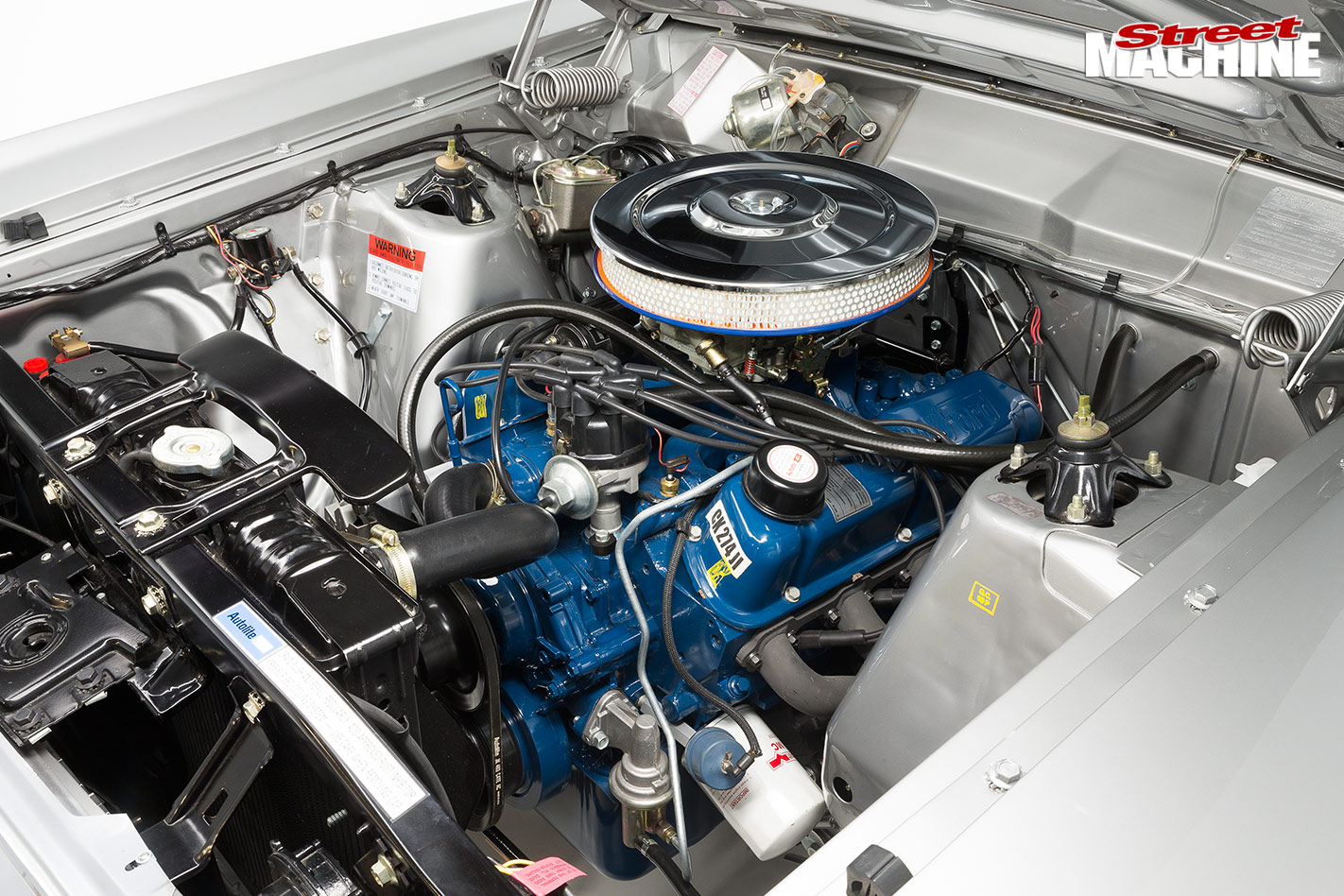 The Windsor is about the only area where this van deviates from stock. Built by Ford guru Mick Webb, the matching-numbers 302 has been stretched to 347 cubes and is fed by a Ford SVO inlet manifold and 650 Holley double-pumper. Not that you’d notice; the Holley has been modified to accept the factory fuel line, while the inlet manifold has been painted the same factory blue as the rest of the engine

Another of John’s good friends, Bob Dunlop, a self-confessed XW/XY van tragic, researched a lot of the van’s history. He also spent countless hours tracking down near-impossible-to-find parts like tailgate hinges and handles – of which he eventually had to find three, after number one wasn’t up to scratch and number two was mutilated by a chrome plater. 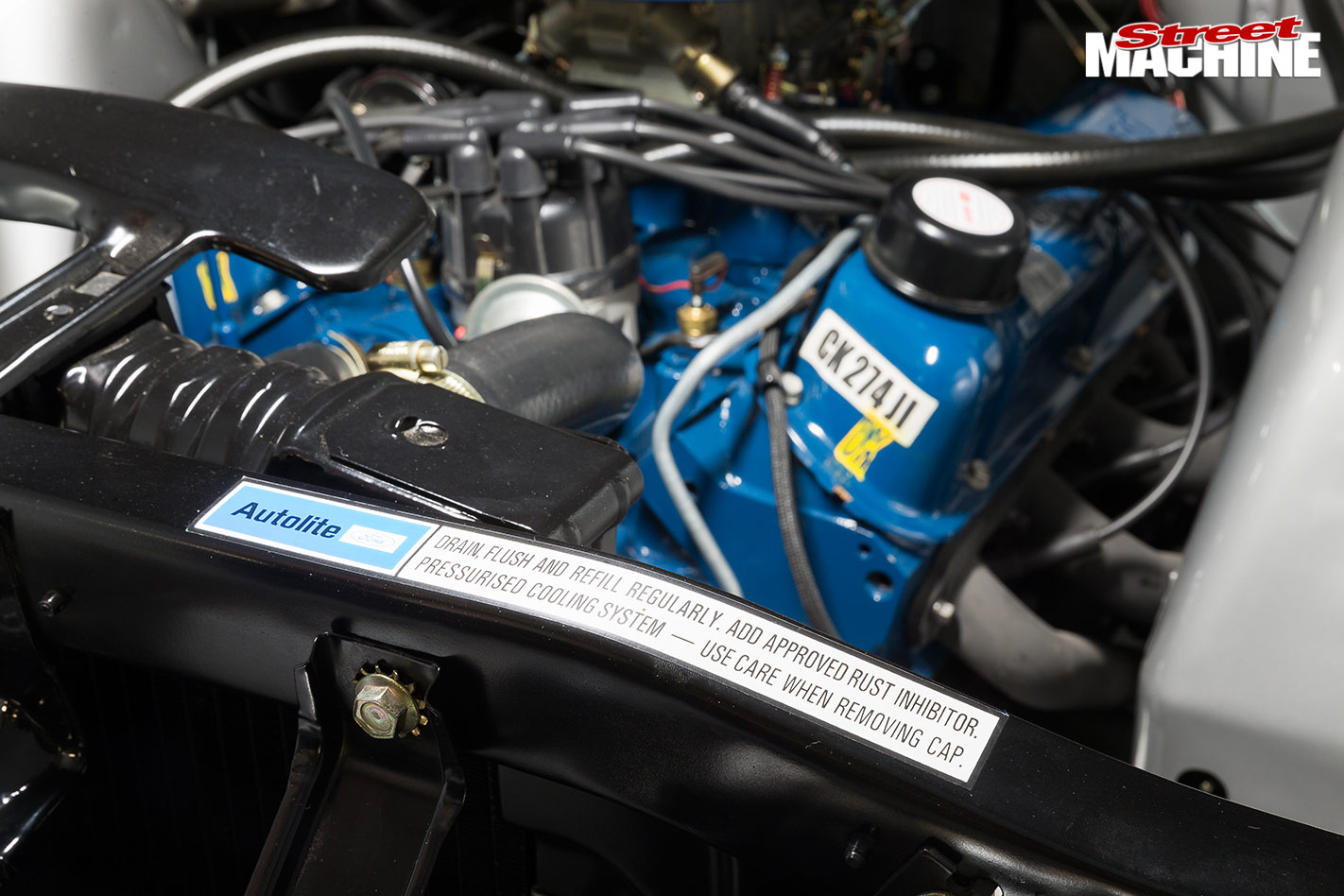 Another mind-melting piece of history (not shown) is a mint-condition, old-stock Autolite battery. This pristine piece is 45 years old and has never had acid in it!

“John is an GT judge and really knows his stuff,” Steve says. “He wanted the van to be 100 per cent factory. It was in a million boxes when he bought it, with lots of missing or damaged parts. Finding all the correct bolts and clips was the biggest nightmare. I also got personally involved, going to swap meets, searching for parts. Normally we don’t do that with the types of cars we build.” 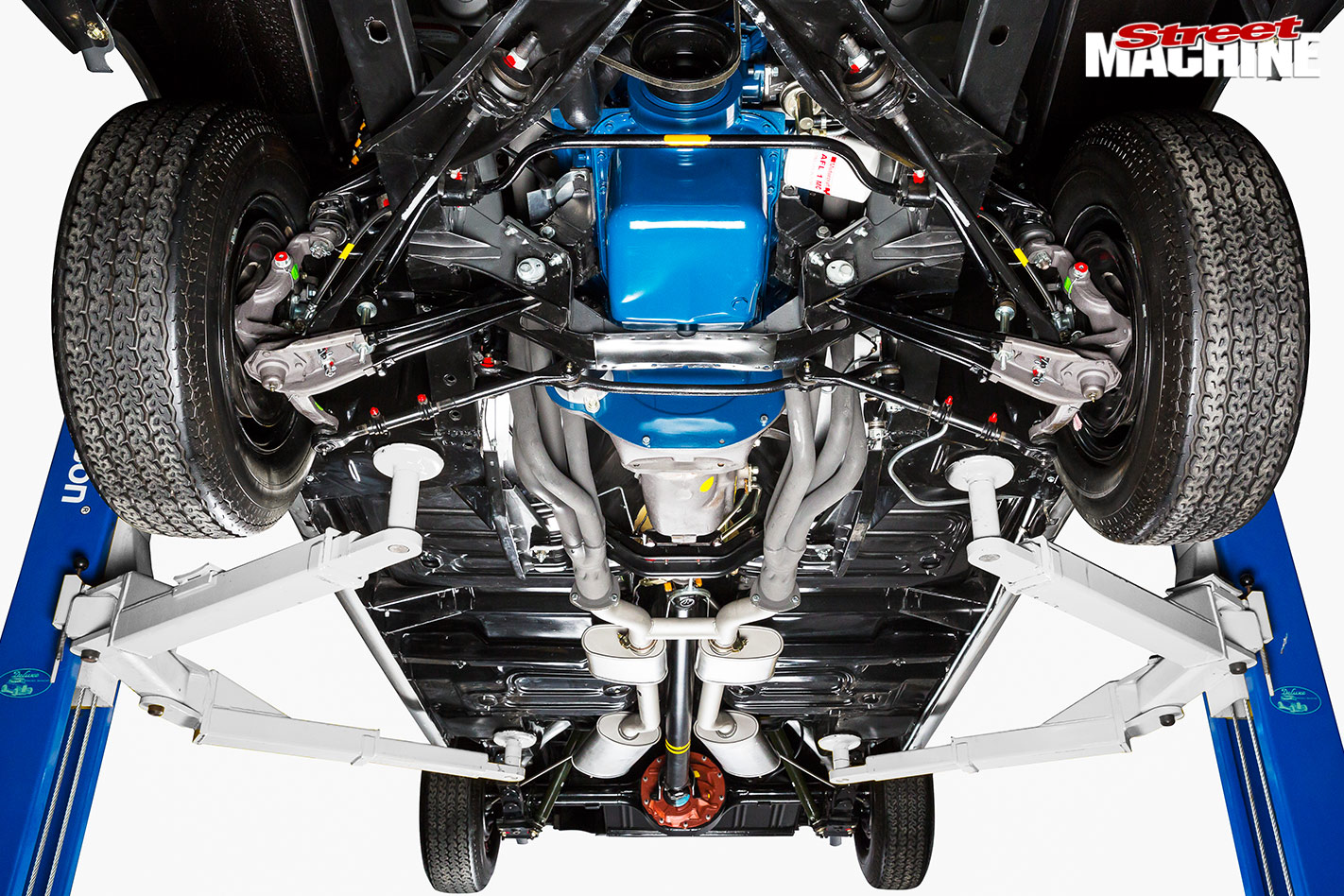 Ford sourced many of the undercarriage’s sub-assemblies from different suppliers – all of whom used a slightly different shade of black. “There’s seven different blacks used in this car,” Steve says. “John was very meticulous about getting the right black matched to the right parts.”

The blokes even went to the extent of using correctly dated glass, and all the bolts are small, two-ring, small-S items – a detail the GT fraternity goes crazy over. 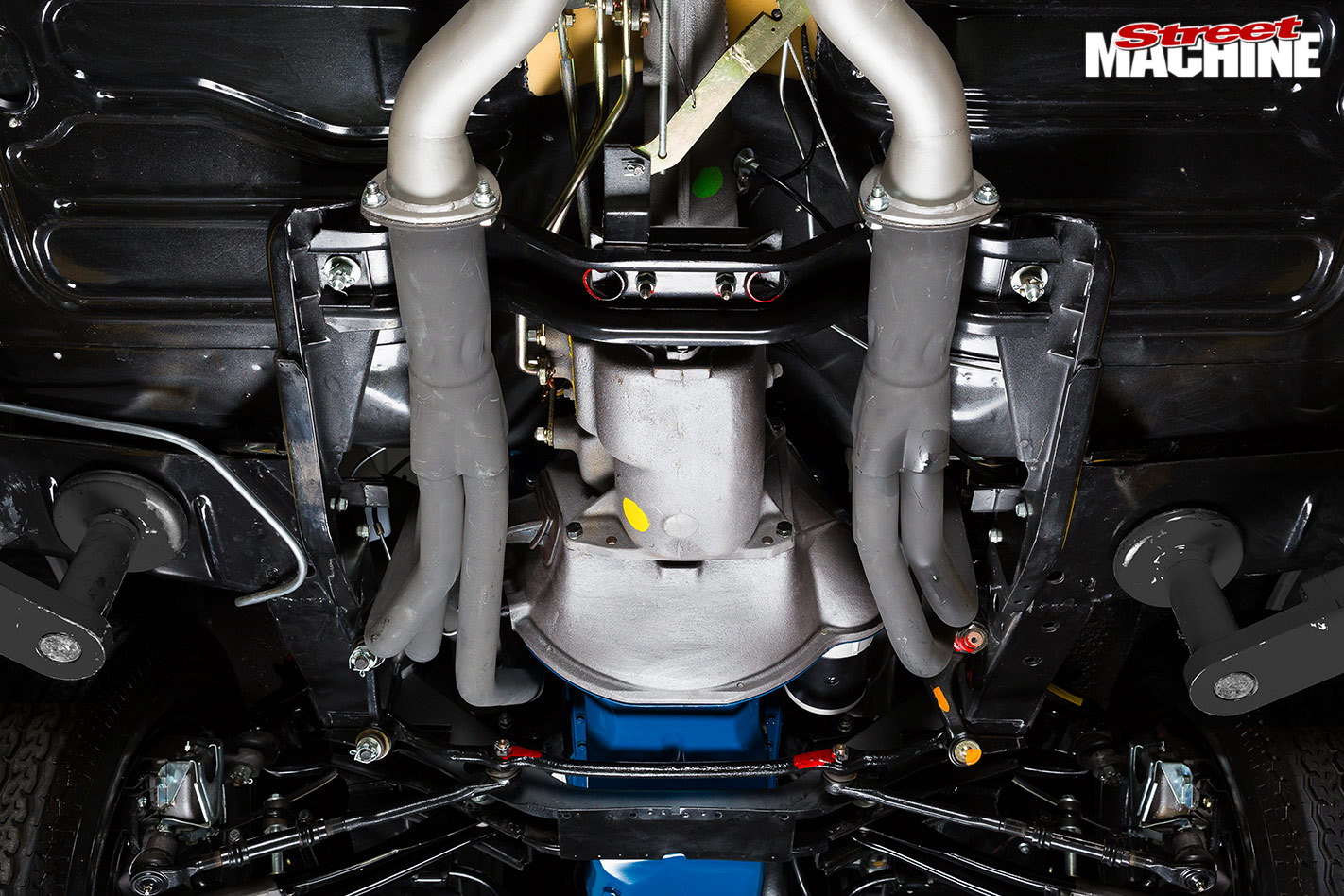 Very little was farmed out; Mick Webb looked after the engine, Reid McInnes retrimmed the seats and Scott from SG Auto Electrical cleaned and re-taped the original loom. In fact, the van never left Deluxe’s workshop throughout the entire four-year build. Dave Wicken wielded the spray gun, while Jim Wolstencroft and Mick McCallum also put in plenty of hours. 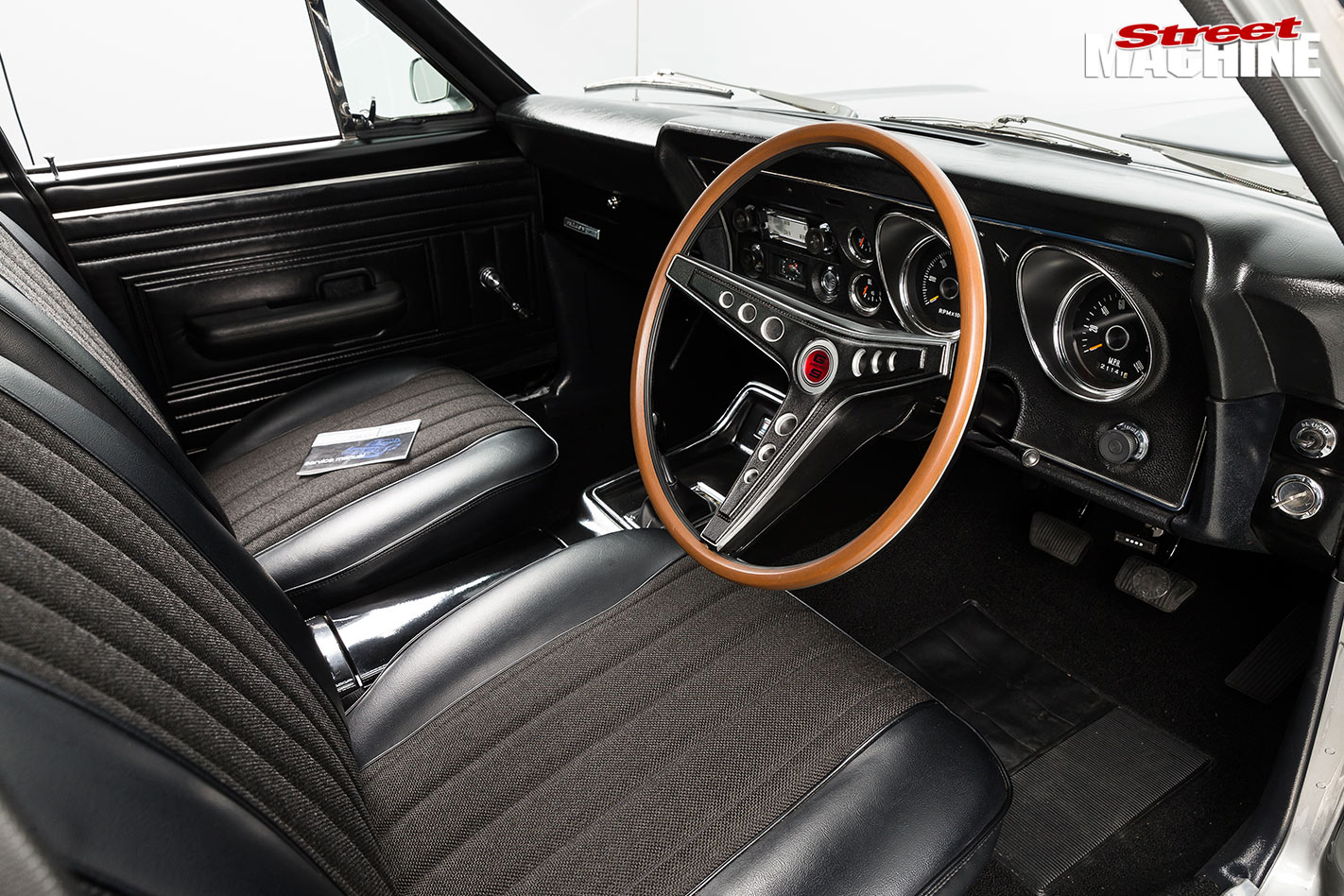 The cockpit is almost 100 per cent original. Other than a meticulous clean, the original door trims, armrests and crash pad were untouched. Dynamat has also been added under the carpet to keep things a bit quieter and comfier

Although Jan and John had seen the van painted, they didn’t see it finished prior to its Summernats 29 debut. A few weeks later, John brought the whole family, including Jan, his daughter and grandkids to the Melbourne Hot Rod Show to see the finished van for the first time, and they were suitably blown away by the end result. 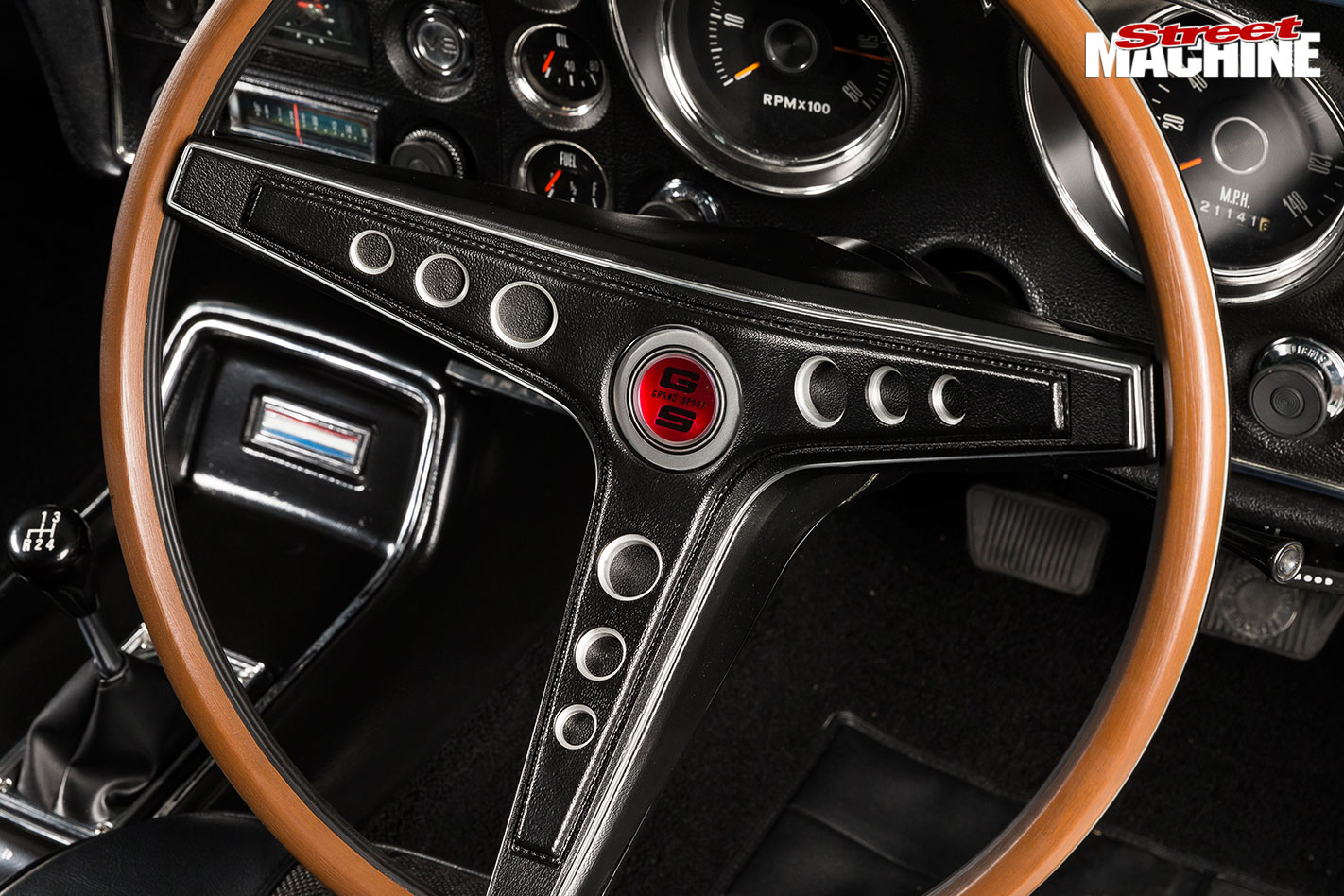 The seats have been re-covered, the dash fascia re-chromed and the steering wheel and column refurbished. Admittedly there are a handful of reproduction parts, such as the console lid, and kudos to you if you picked the loop-pile carpet as the only non-factory-spec element

Despite being quite different to the builds Deluxe Rod Shop are renowned for – Steve freely admits the van has gone far beyond any of his other builds – the reaction has been amazing. Maybe people are recognising that this is one urban legend that’s actually for real. 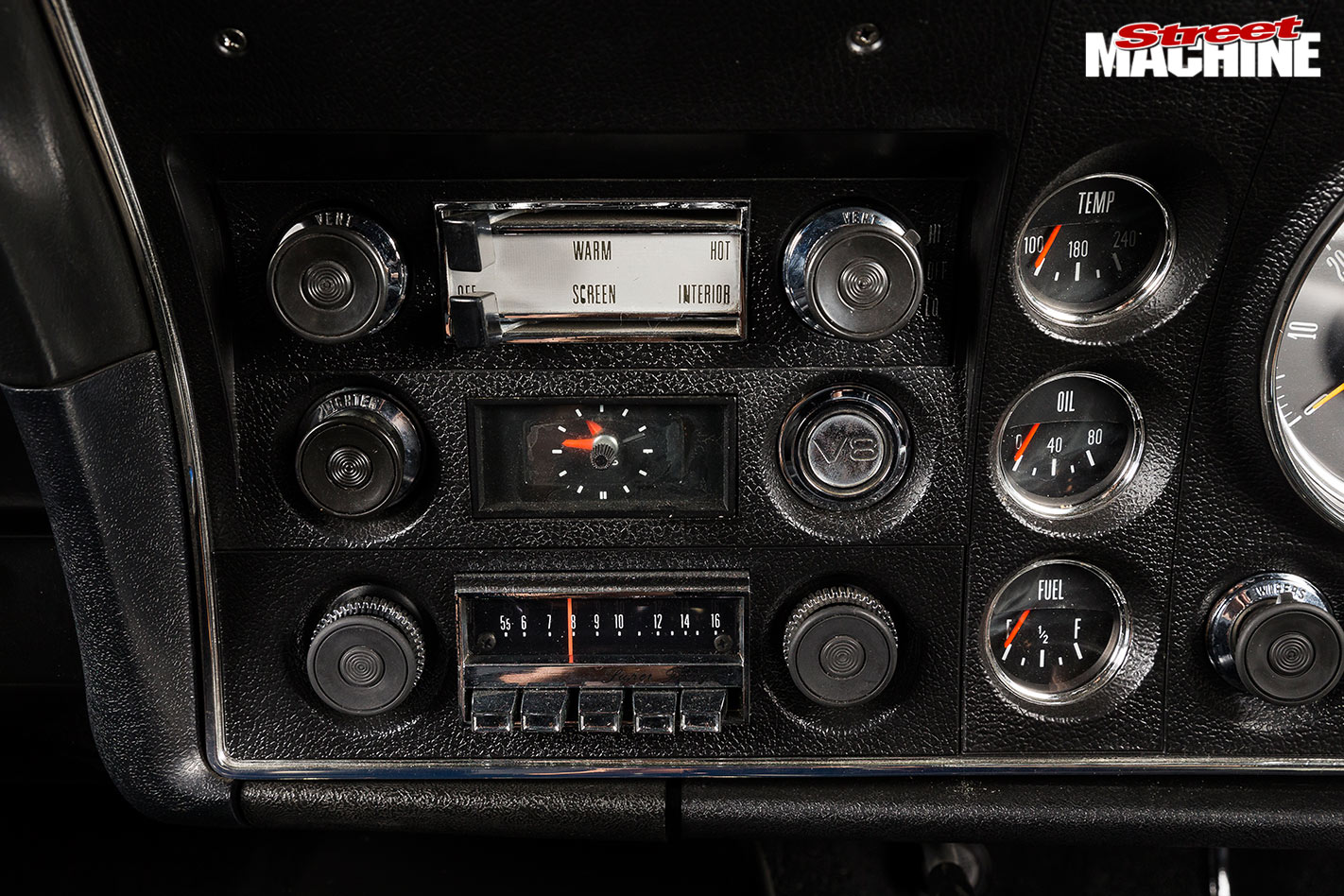