This story on Rob Burns’s Checkmate originally appeared in the January 2011 issue of Street Machine.

“I’m at a serious crossroads,” Rob Burns explained. “I own one of Australia’s most iconic custom panel vans but it needs a heap of work and I’m tempted to make some changes. What I’d really like to do is update the van but still have it recognisable as Checkmate.” 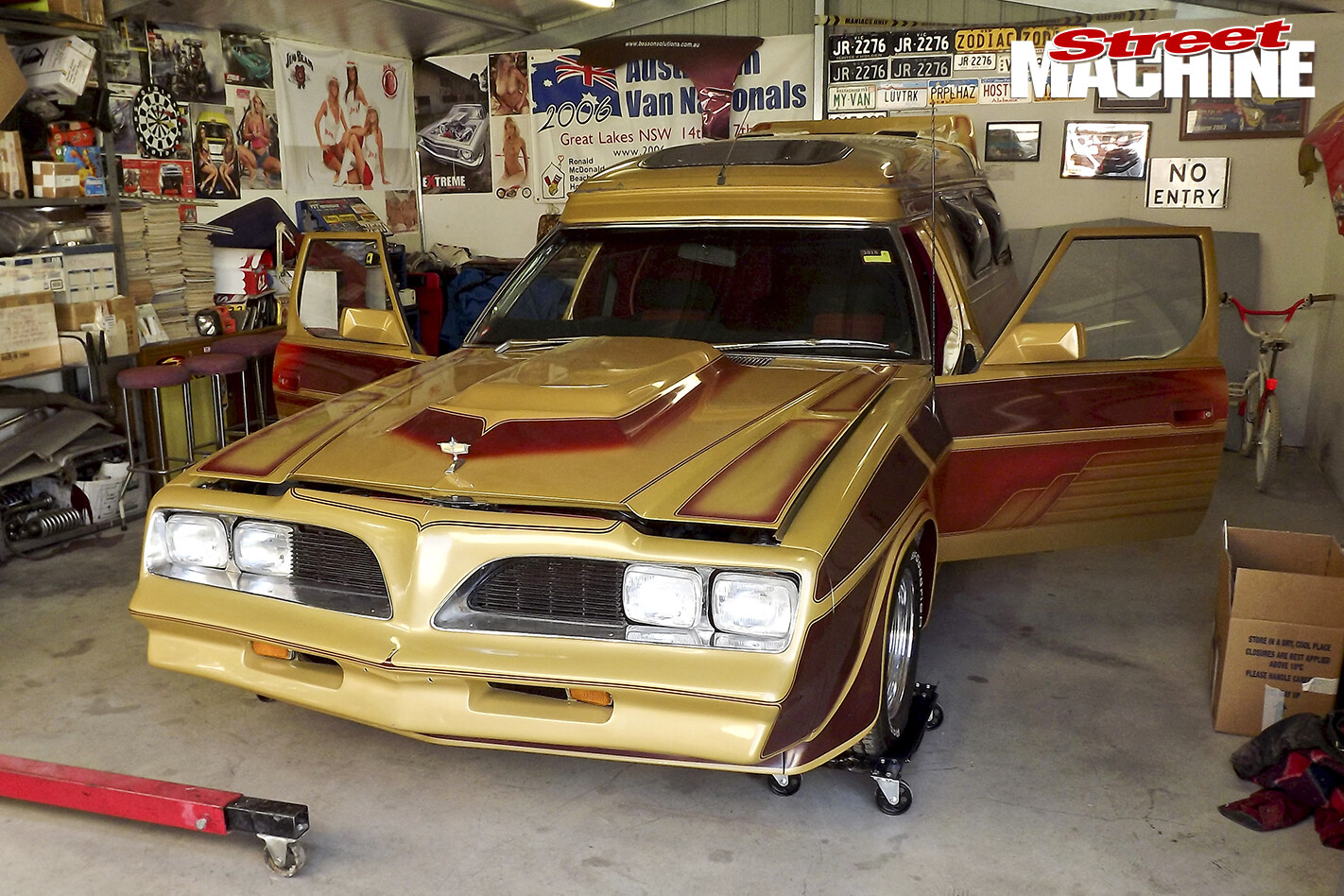 It’s a conundrum all right – you risk accusations of downright disrespect if you grossly alter a symbolic piece of automotive Australiana. But in Rob’s favour, Checkmate had already copped a number of changes before he bought it, so it’s popped its alterations cherry.

Checkmate was built by John Roach in the early 80s and won Australia’s Top Van in 1982. After retiring from the show scene, John sold the complete body shell and interior to the late Dave Fernance but kept the chassis and running gear to build a hot rod.

The two rivals form an unlikely partnership, combining Hooper’s experience with Ski’s fearlessness to plan a stunt that will cement the pair as legends in their field. 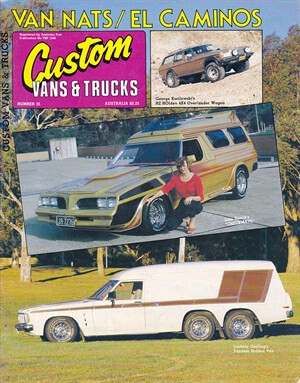 Dave dropped the body over the chassis and hot 202 from his own Holden van before eventually moving it on again.

“I fell in love with this van as a 12-year-old after seeing it in Custom Vans & Trucks at the ’87 Van Nats,” Rob said. “I bought it in 2006 and currently have it stripped to a bare chassis. Rust repairs are needed to the body, so it’s inevitable that it will need a repaint. I really love the look of the Burt Reynolds Edition ’77 Trans Am built by Year One and was hoping to build something influenced by that style.”

‘More is more’ was the formula for 1980s panel vans, as owners tried harder to keep ahead in the show stakes. Artist Aden Jacobi, who came up with the concept renderings for Rob’s version of Checkmate, cut his teeth drawing vans during the heady days of Van Wheels, so he knows a thing or two about the revered sinbins.

“They were definitely cool for the time but some were just totally overdone,” he admitted. “I do appreciate and support Rob’s commitment to retaining Checkmate’s identity and think this concept will give him the best of both worlds.

“A thorough spring clean is the best place to start body-wise, so I’ve removed all unnecessary scoops, bumps and add-ons without losing its custom van traits.”

The Trans Am front was moulded off an actual Pontiac by Gary Pockett, so the shape was already perfect, though Aden’s concept drawings have the indicators moved outwards to make better use of the vacant space and visually widen the front. The original twin headlamps and modified XW Falcon grilles have been replaced with modern one-piece lamps and mesh inserts. The L88 bonnet scoop has been pancaked slightly and fitted with a recessed grille at the rear to again break up the vacant space. The flush-fitting XD Falcon mirrors were probably super-cool back in ’81, but have been changed for smaller, more aerodynamic versions.

“I’ve recessed the originally protruding rear wheelarch scoops and mirrored this design as a replacement for the GTS front guard flutes,” Aden said. “The front spoiler and side skirts remain but I’ve incorporated sidepipes into the skirts as a way of including two custom van styling cues in one hit.”

And they look cool. The rear was a bone of contention for Aden, who felt the practice of fitting LTD tail-lamps sometimes spoils the proportions, so he added a full rear pan with a chin-style Trans Am bumper extension, and thinner-section tail-lights to tighten things up.

The one-piece tailgate remains but the tailgate and twin-bubble side windows have been replaced by flat one-piece bonded glass. “The paint is the key to avoiding an identity crisis, so I retained the gold and bronze sprayed by Gary Pockett, but modified the graphics to improve the flow along the revamped bodylines,” Aden said.

“Stephen Pearson’s 1973 art piece Solar Offering will remain as the inspiration for the tailgate mural and is a key element in nailing some originality on the revamped rear.”

Wheels are big-inch billet versions of factory Trans Am snowflakes, with the original flared guards more than capable of holding some big rubber. In addition, a decent lowering job will update the 80s rake and give it a real ground-hugging profile.

“Checkmate ran a 350 Chev, Muncie and Jag diff in its prime, but I’m still undecided about engine options,” Rob said. “A twin-turbo 502 is the pipedream but I’ll more likely stick to a 350 Chev and Turbo 400, maybe an LS1 conversion. I did manage to track down and buy the original Jag diff, so that’d be cool to refit.” 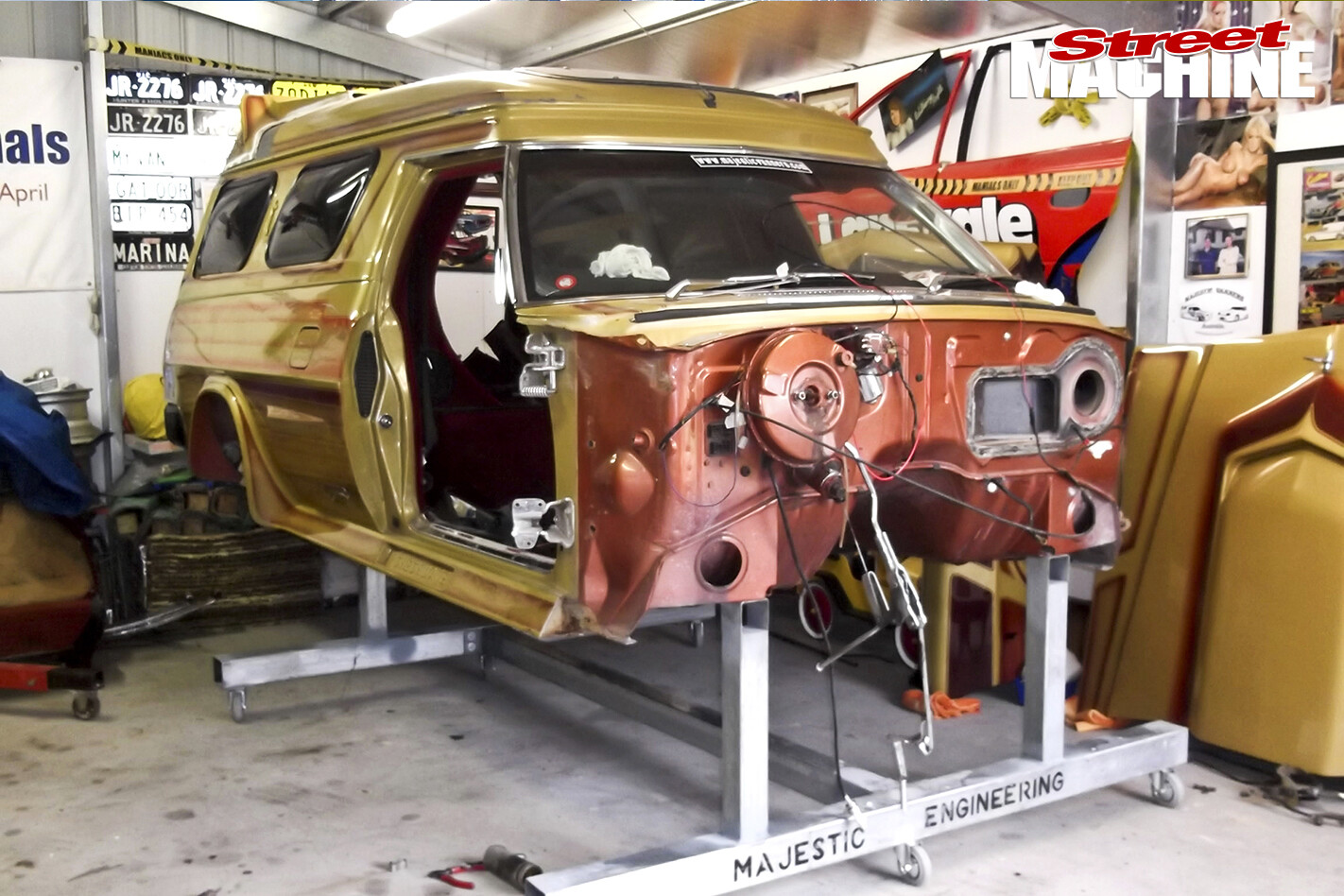 The full van-porn diamond-tuft crushed velvet interior is in exceptionally good condition and will more than likely make a reappearance, albeit with the brown-striped wall replaced and some more modern electrical upgrades.

“The plan is to drive the balls off this thing and give it as much exposure as possible, so I really need it to look sharp and be reliable,” Rob said. “I miss driving it – I’d pull up at a servo and people would flock to it and say: ‘Wow! Is that really Checkmate? I loved this van as a kid.’

“Aden’s concept is the perfect mix between its original self and the Year One TA. Adding modern brakes, suspension and plenty of grunt will make it even more fun, and it’ll seriously turn heads being flogged around the track at Powercruise.”