ONE thing we could learn from our US brethren is a solid appreciation for our modified car history. The Yanks treat iconic rods and customs like royalty, yet here on Aussie shores such cars are often glossed over. I’ve never understood why we have this mindset, but thankfully the tide is turning, with more Aussie icons being discovered and preserved. 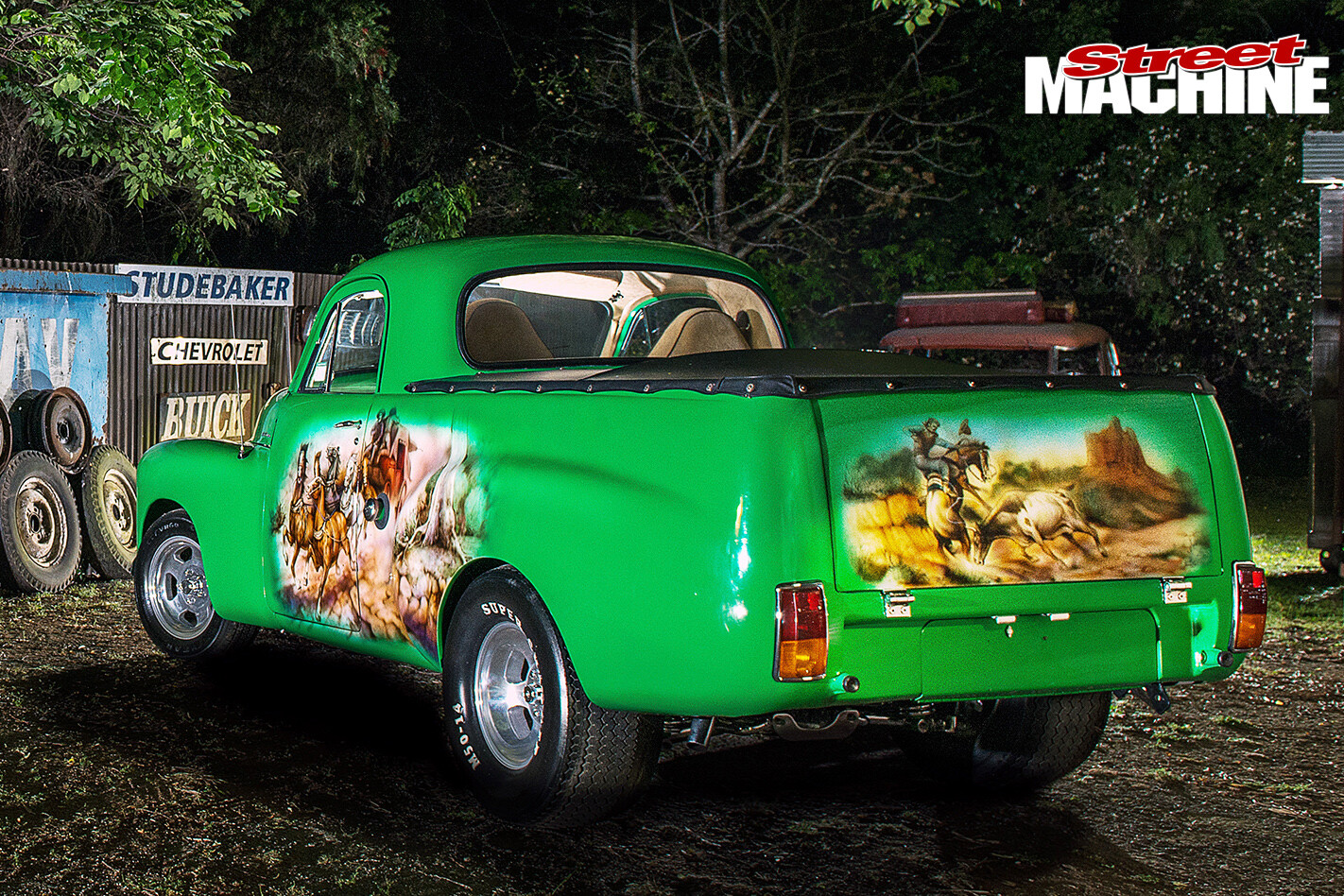 Check out the styling of this FJ ute, for example. Its distinctive green hue and Frank Lee murals may be familiar to some, and there is no question that this humpy represents what was hot 30 years ago. 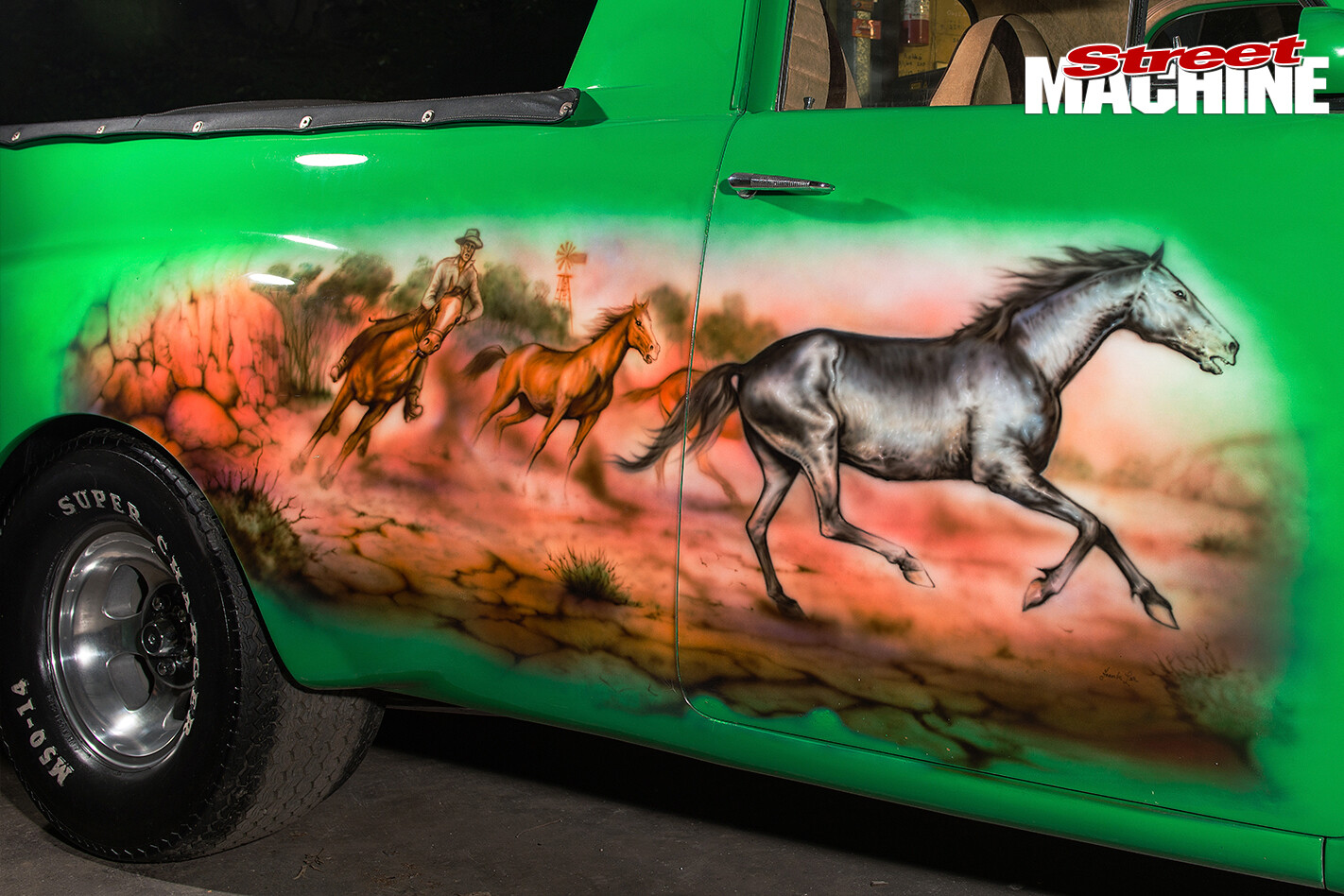 It was the result of nine years’ hard yakka from Sydneysider Ron Keegan, who scored the ute as a rusty freebie in the mid-70s. “A friend, Garry Smith, owned it and I’d been chasing it for quite a while,” Ron says. “He wasn’t keen to sell until his parents wanted it gone from their driveway, so passing it off to me was an easy fix.

4
The FJ's builder, Ron Keegan, was reunited with the ute at last year's Meguiar's MotorEx

“I was married with two young kids, so trying to scrape together the money and time was the hard part. I managed a butcher shop by day and worked as a servo attendant at night to make ends meet. It was a long-term build, no question, but I redid it three times in that period as my ideas kept evolving. I knew what I wanted but kept getting told it couldn’t be done; that just inspired me to try and do what was considered impossible.” Ron couldn’t afford professional work so tackled the build himself. The panel repairs, paint, engineering and fabrication were all nutted out on his garage floor, while the chrome was a labour of love for his dad, Ron Sr. “I was fortunate to have a father who was a metal polisher,” Ron says. “He and his mate Alex would go into work on a Saturday – their own time mind you – week after week and chrome anything I handed their way. The quality is amazing. Even after 30 years it is the best I have laid eyes on. I come from a family of chromers so have seen my fair share.” The suspension, full exhaust, tailshaft and even the Powerglide have all scored the shiny treatment, but that’s just the tip of the iceberg. “Dad even chromed the rear shocks for me, but it stuffed the seals so I had to paint them in the end. So yes, I was going for maximum impact,” Ron laughs. 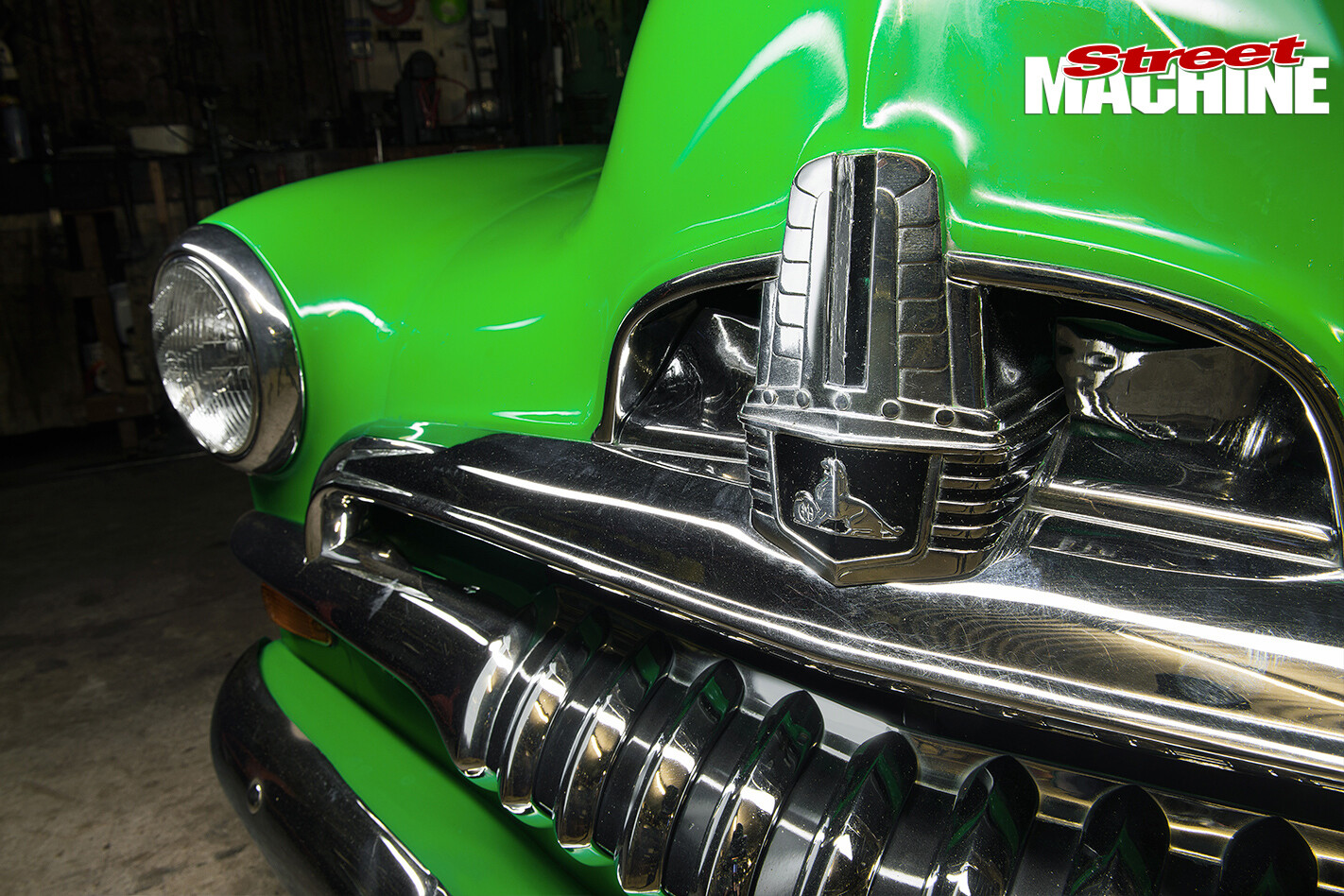 The project started off with a 186 auto running triples, before Ron was offered a working 307 and Powerglide. That was upgraded to the current 327, which features Power Pack heads and a Cain tunnel ram running two 350 Holleys, and the transmission was shift-kitted and fronted with a 2000 stall. A custom tailshaft bridges the gap to the Jag rear, which uses a Mk10 LSD centre and narrower S-Type swing arms and driveshafts to fit snugly under the FJ’s rear.

An HR front end employs LH Torana rack-and-pinion steering connected to an HR column. Brakes are P76 discs and HQ calipers up front and Jag items in the rear, all squeezed via an Austin 1800 master cylinder and VH44 booster. 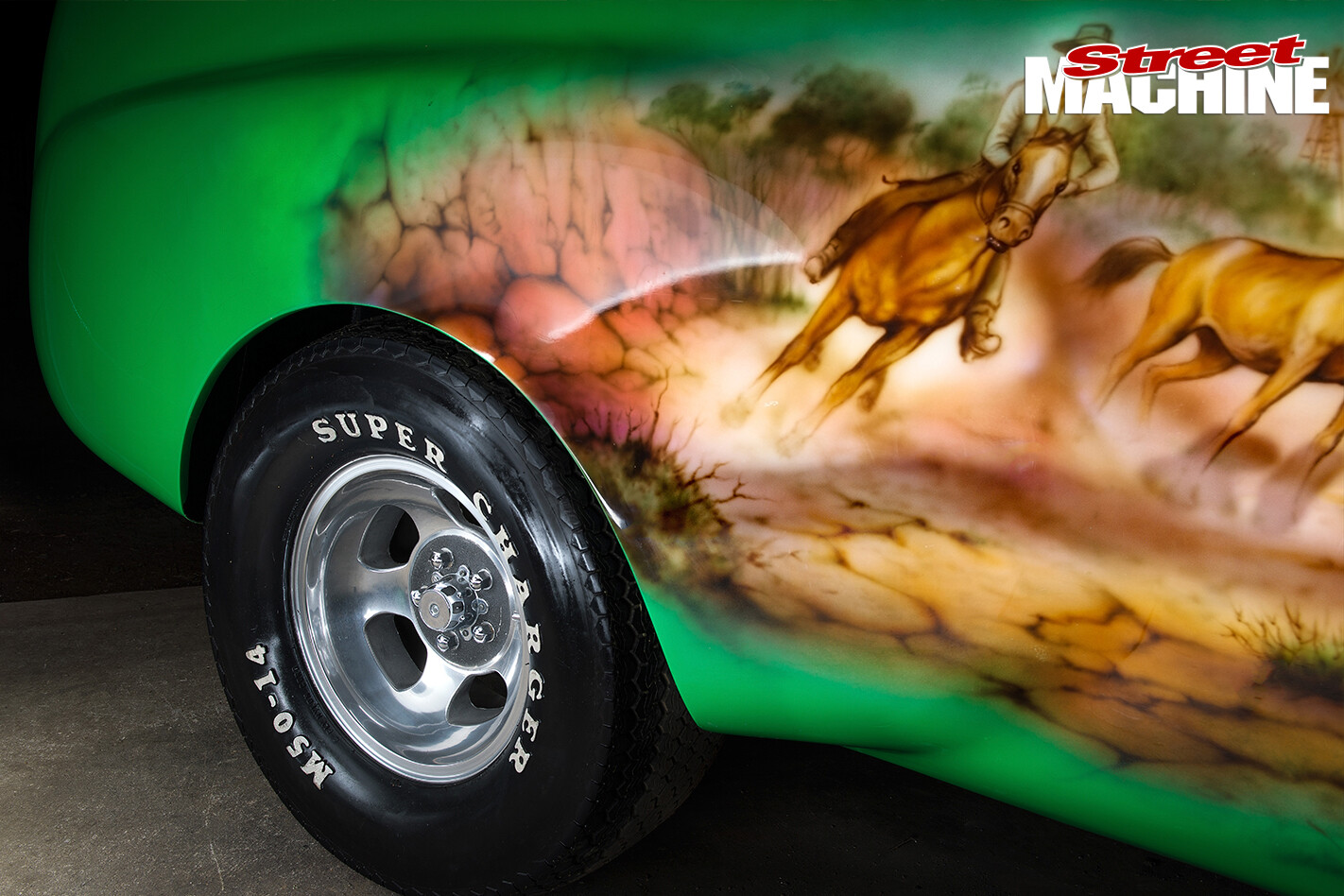 The body remains essentially stock apart from inverted Mini Clubman tail-lamps, while the Ascot Green paint was highlighted with side and tailgate murals from the grand master of Australian airbrush art, Frank Lee (Van Wheels 11, SM Jun ’15). “Frank is such a talented artist and a really nice bloke to boot,” Ron says. “He came to my house and made it look easy; he did a wonderful job and it really created an identity for the car.” 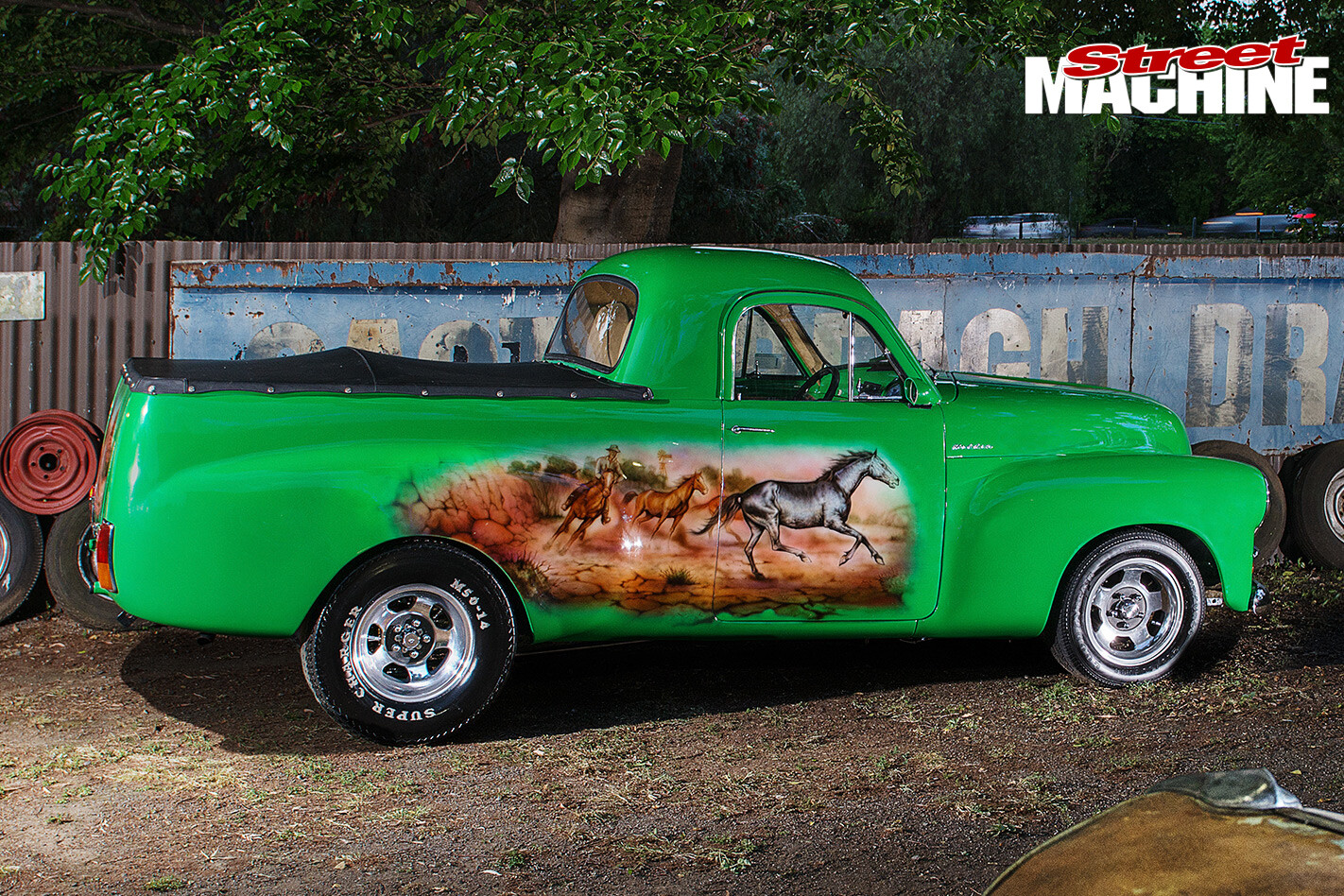 Ron was making waves with the ute and earning his fair share of awards when he was sidelined after a serious horse accident. “I was crushed into a tree, which caused me major back issues. I couldn’t work on the car or even lie down to clean it, so put it into early retirement.” Thirty years on, Sydney-based early-Holden buff Scott Ribbons had been dreaming of the day he could become custodian of a certain Ascot Green FJ utility. “I knew Ron when I was a kid,” Scott says. “He was our butcher at Penrith Plaza and I used to see the ute at shows; I always liked it. Years later a mate brought him by to have some mechanical work done and I asked if he still had the ute and would he like to sell it. He told me where to go, as it was never going to be for sale! But in May this year he finally decided to part with it and I was onto him straight away. We struck a deal and I bought it for myself as a Mother’s Day present!”

Scott’s plans for the ute are simple: “Nothing. I am purely a custodian and will only do the things it needs to remain mechanically sound. You should never destroy an icon. The ute is a total credit to Ron. The quality of this build is huge and he did nearly all of it himself in the shed. All I have done is wash it with a bucket and sponge; that’s how mint he kept it. Lucky his dad was a chromer; there is no way anyone could afford that bill!” So the ute will continue to lead a charmed life, and recently created plenty of interest when displayed at MotorEx Sydney. “It was great to see people’s reactions to it after all these years,” Ron says. “I have always treasured the car and would joke that I would be buried in it!

“I really must thank my boys, too, Jason and Joshua, who went without a lot of ‘Dad’ time when I was so deep in the build, and to Scott for his commitment to the ute; his love for the FJ is the only reason I could part with it. It has gone to a good home.”