It might look demure, but Demetri Stamatis's turbo LS3-powered Calais is good for 700hp at the wheels

It might look like just another tidy Calais, but this golden rocket hides a turbo LS3 making 700hp at the treads

I HAD sold my previous VL on a Sunday and was already regretting it that night,” says Demetri Stamatis, or Dimi to his mates. “I trawled through CarSales, Gumtree and eBay on the Monday and by Wednesday night I was in Melbourne picking up a new shell.” 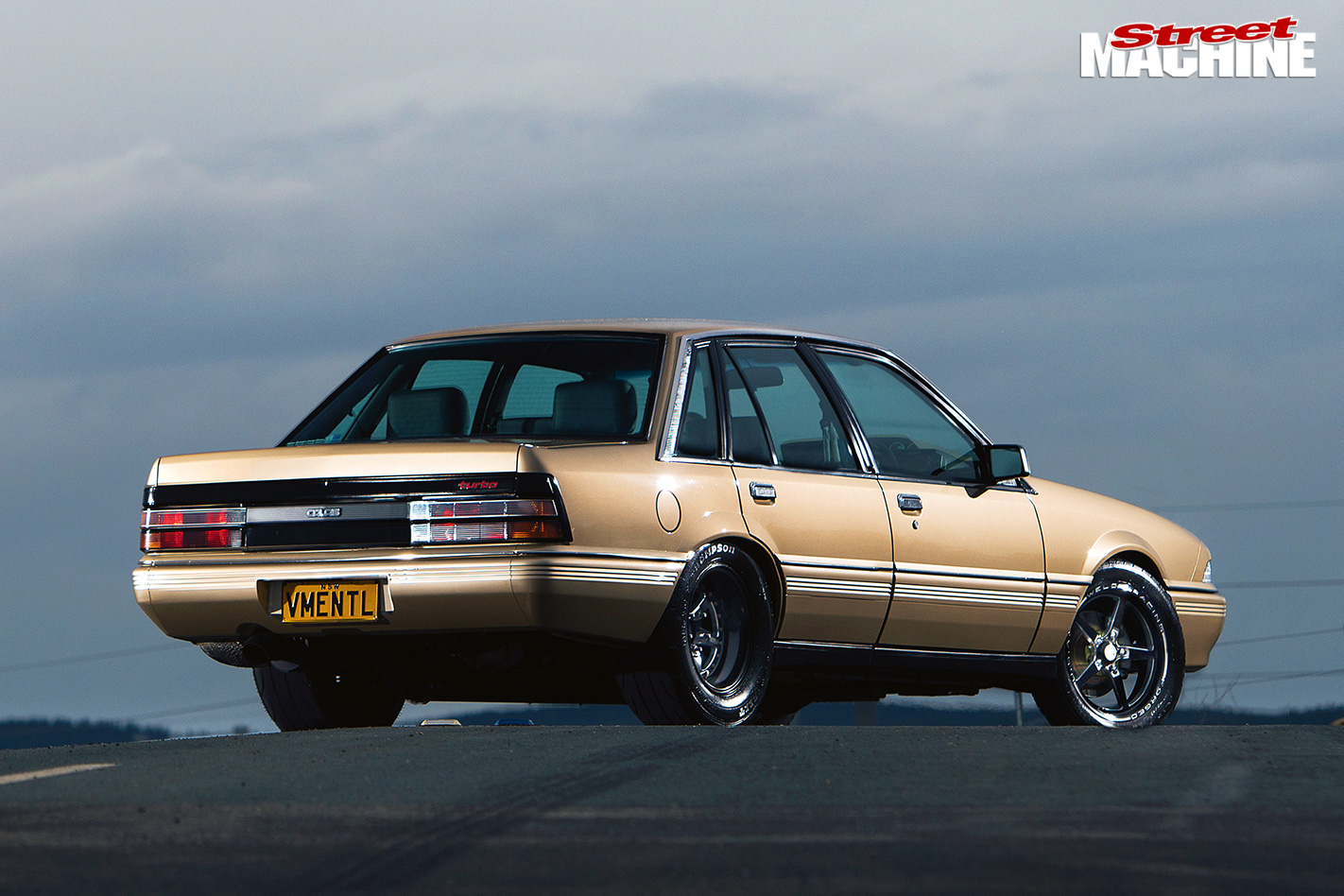 Dimi had VMENTL at Sydney’s May Powerplay event, where he spent much of his time laying strips down the front straight

And just like that, this slick VL Calais came to call Queanbeyan home. Right from the outset, Dimi wanted to leave the body tidy and focus on building a mega-tough drivetrain. That meant he’d only walk one path. 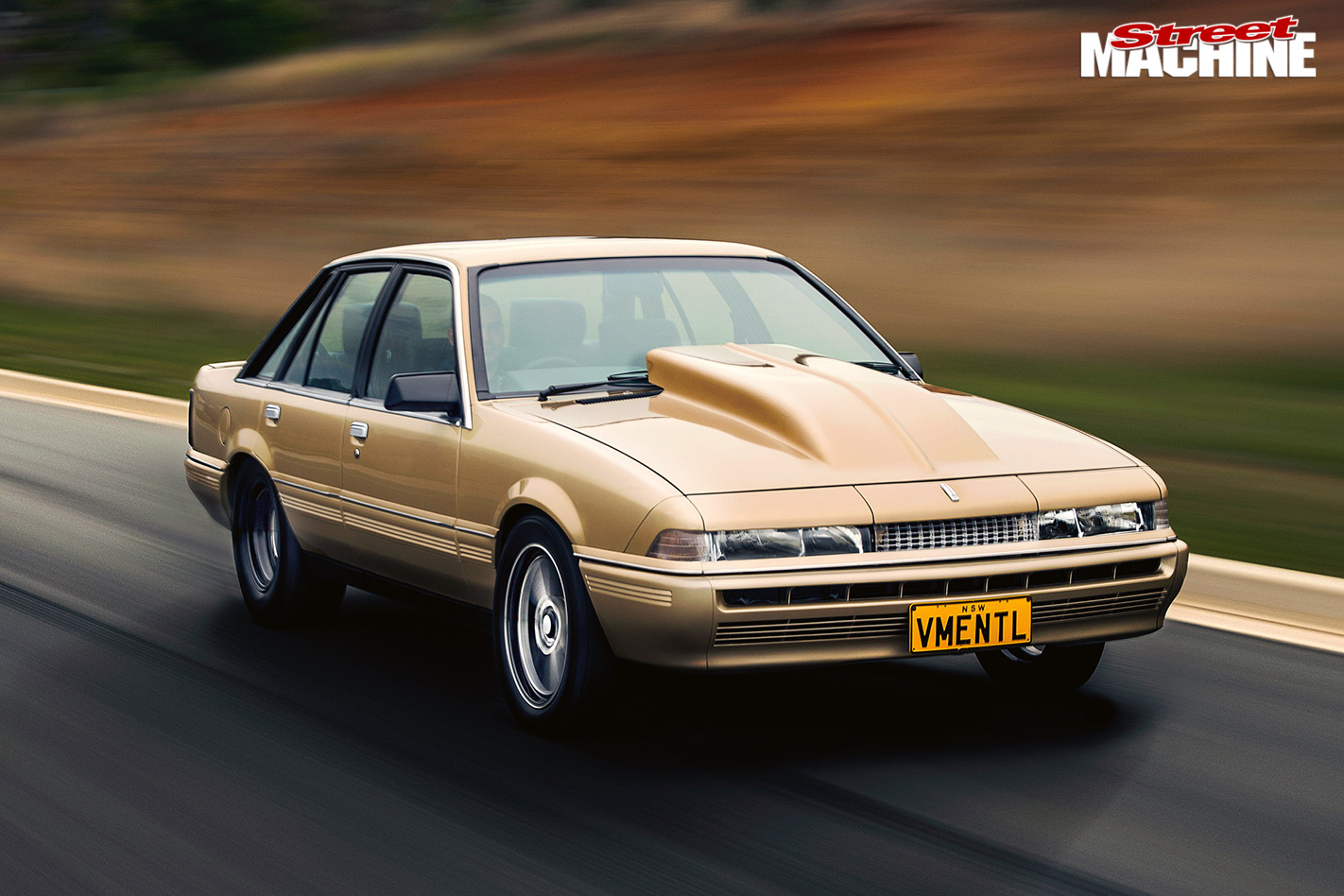 “I wanted to do top-gear skids at Powercruise, so a turbo LS was an easy choice,” he says. “I set out to build a neat and tastefully appointed street car with plenty of reliable grunt on tap, and I think I achieved that.” 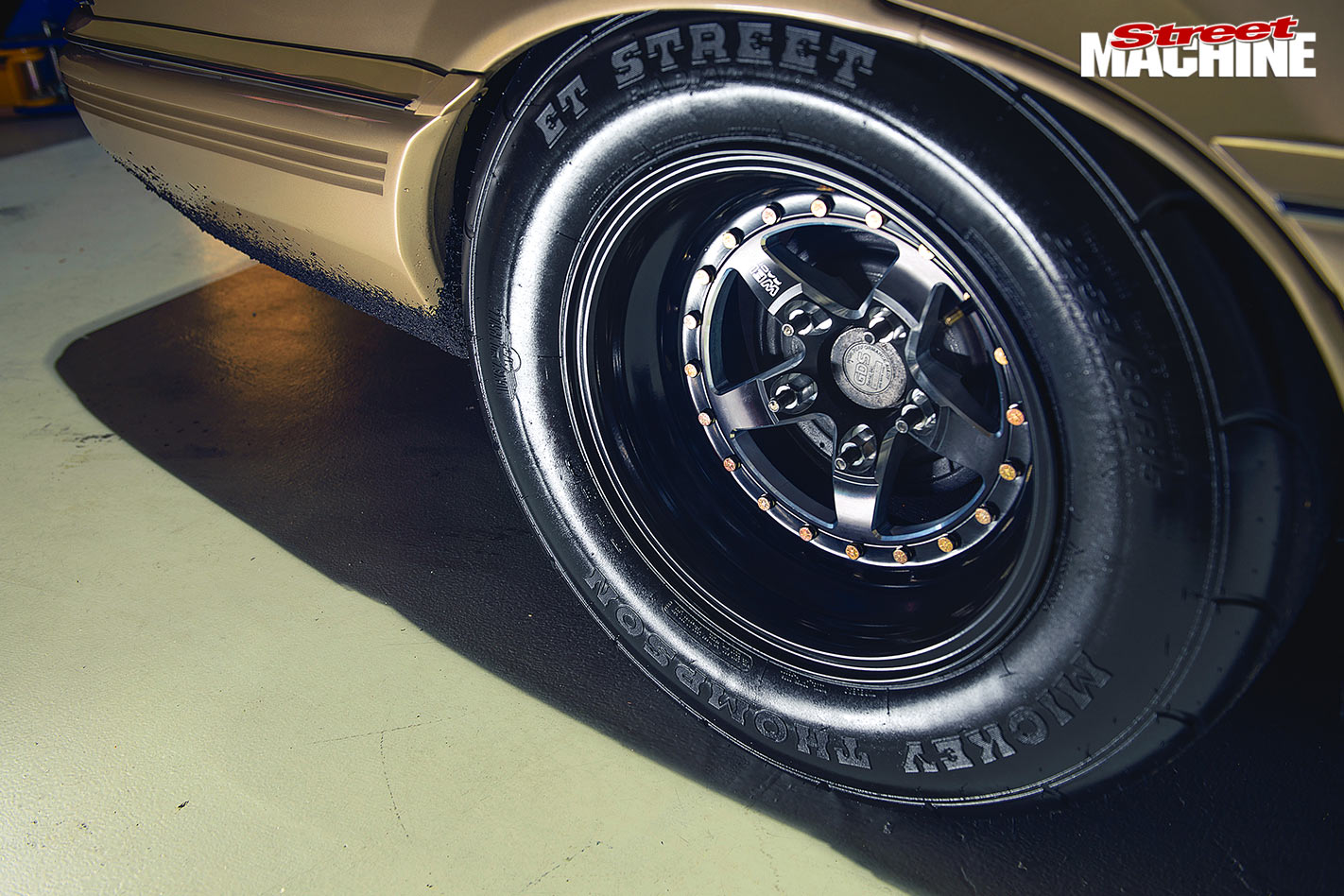 Many punters miss the 10-inch depth on the Weld RT rear hoops at a passing glance, due to their black hue. The fat Mickey Thompson ET Streets are covered in smoke most of the time, anyway

He sure landed that goal right between the posts. The shell looks crisp in PPG White Gold, and the cabin sculpted by Top End Interiors retains a factory feel while boasting upgrades in the form of VN-era Scheel HSV SV88 seats and new trim over stock cards. 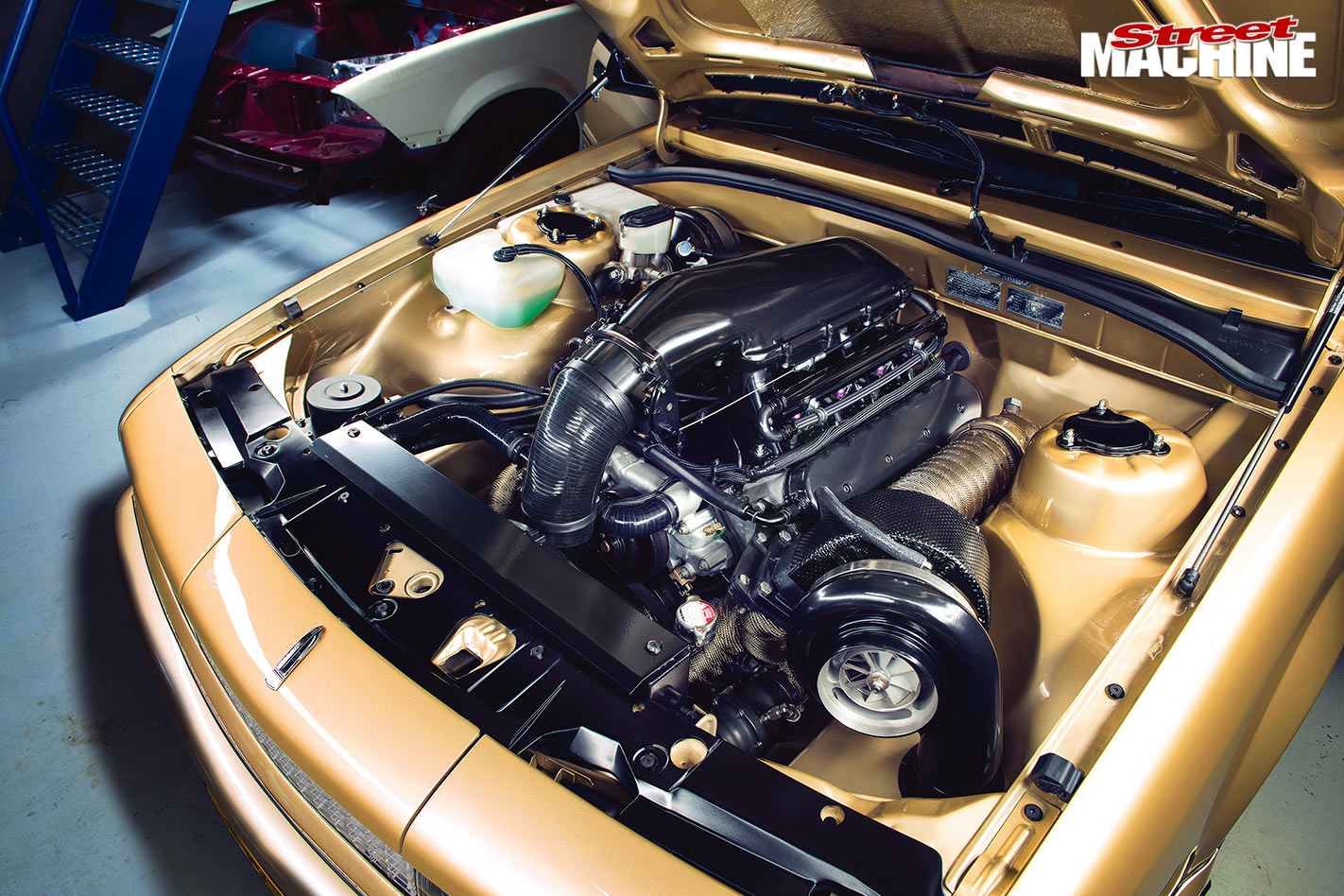 Rather than polishing it all up, Dimi had the main engine bay feature pieces powdercoated black. Hard-wearing, good with thermal loads and with an OE-like finish, it’s practical and stylish

You’d hardly believe Dimi took this car from trailer rat to skid machine in just six months of after-hours work. The body was all right but copped the full treatment from Ryan Martin and Steve Shepherd anyway, with a cowl scoop added to the bonnet and a bit of cancer cut out of the boot. Dimi cleaned up and resprayed the inner wheel wells himself, before turning his attention to the important stuff. 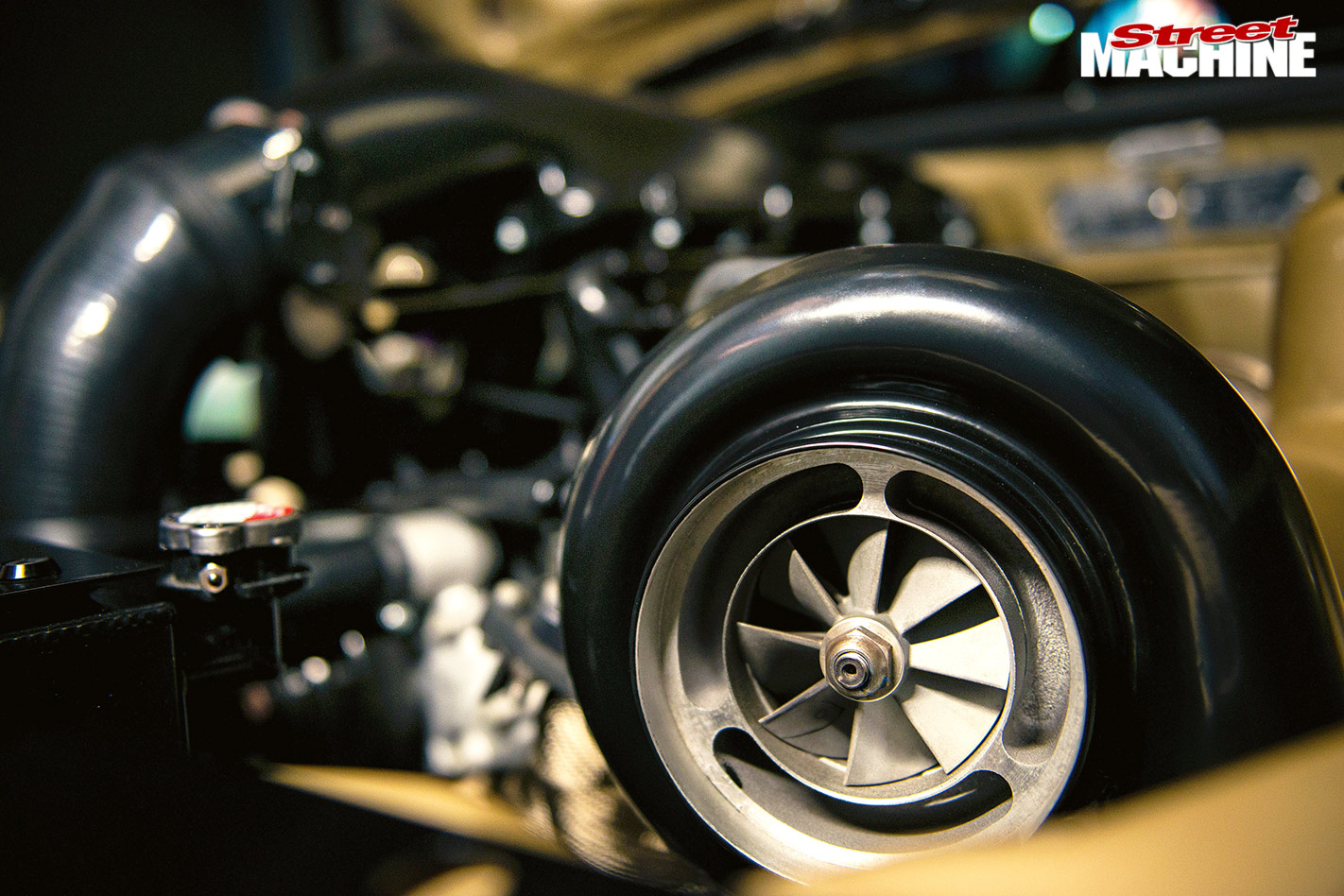 These 80mm BorgWarner turbochargers are considered cheap and crude, but the horsepower can’t be denied. They’ve become the top pick for punters on a budget wanting to make diff-bending power on LS engines

The real news is the boost-fed LS3 under the well-endowed bonnet, with the deep-breathing Gen IV 6.2-litre motor matched with an 80mm BorgWarner turbocharger and high-rise Holley intake manifold. Sam Fenech from Westend Performance is the man responsible for piecing it all together. Inside the aluminium block, Sam stuck with the stock crank but added a set of 10:1 Wiseco pistons and Callies conrods lubricated by a Mellings HP oil pump. Morel tie-bar lifters replaced the weak factory units, along with Lunati pushrods and Ferrea valves and double springs. 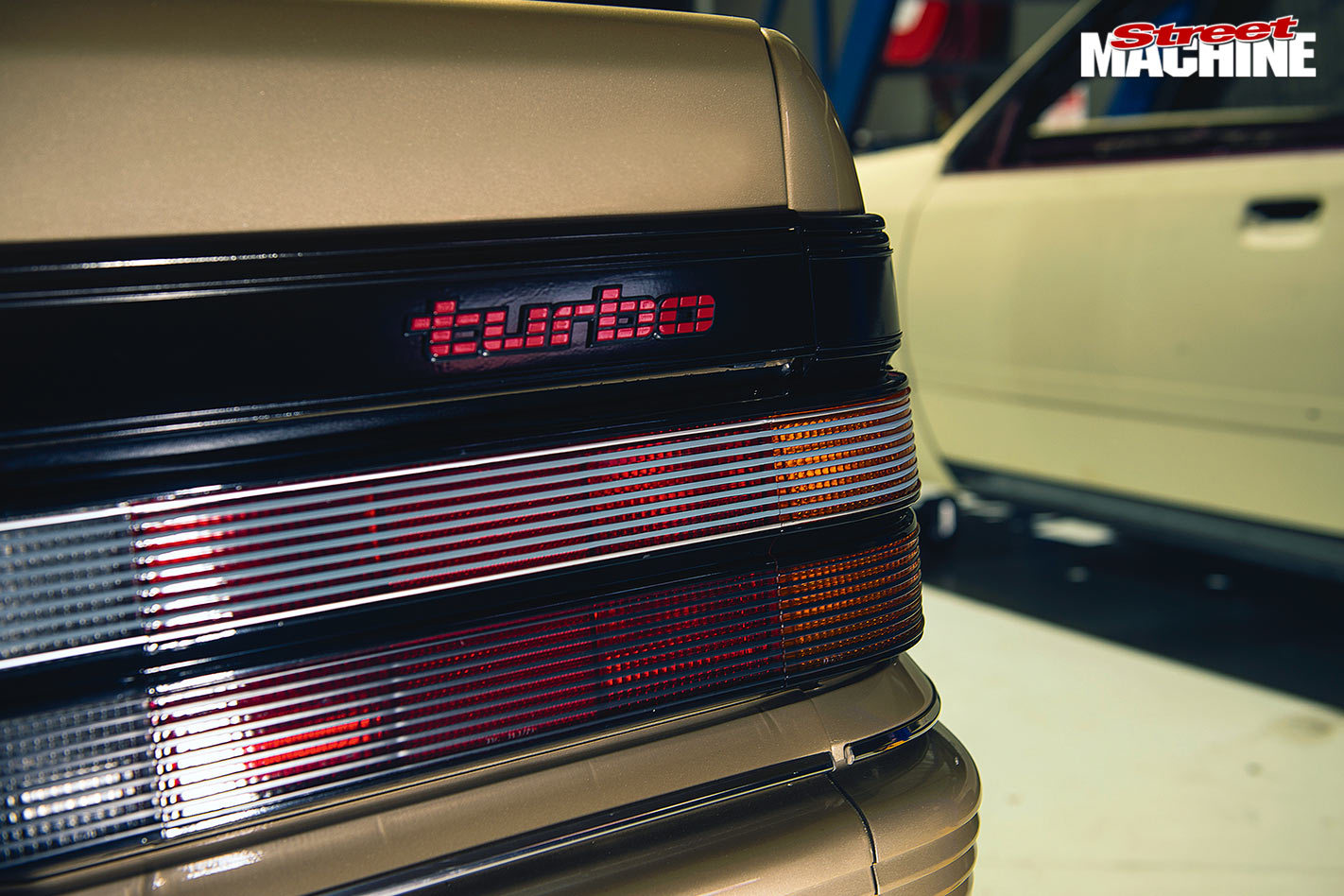 Dimi’s last VL was a “lag monster” snail-fed RB six-powered brute. The factory turbo badge on VMENTL’s rump is just another hint of the potential the gold Calais has

Choosing to run E85, Dimi super-sized the fuel system. Eight new Delphi 1400cc injectors sit in the manifold and are supplied by a Magnafuel 750 Protuner pump feeding from a boot-mounted cell.

The rest of the combo guarantees Dimi won’t have any problems with reliability or bad manners during summer cruising in nearby Canberra. An alloy radiator and 3000cfm worth of thermo fans ensure temps stay down, while a full-length four-inch exhaust handles waste gases without being offensively loud. 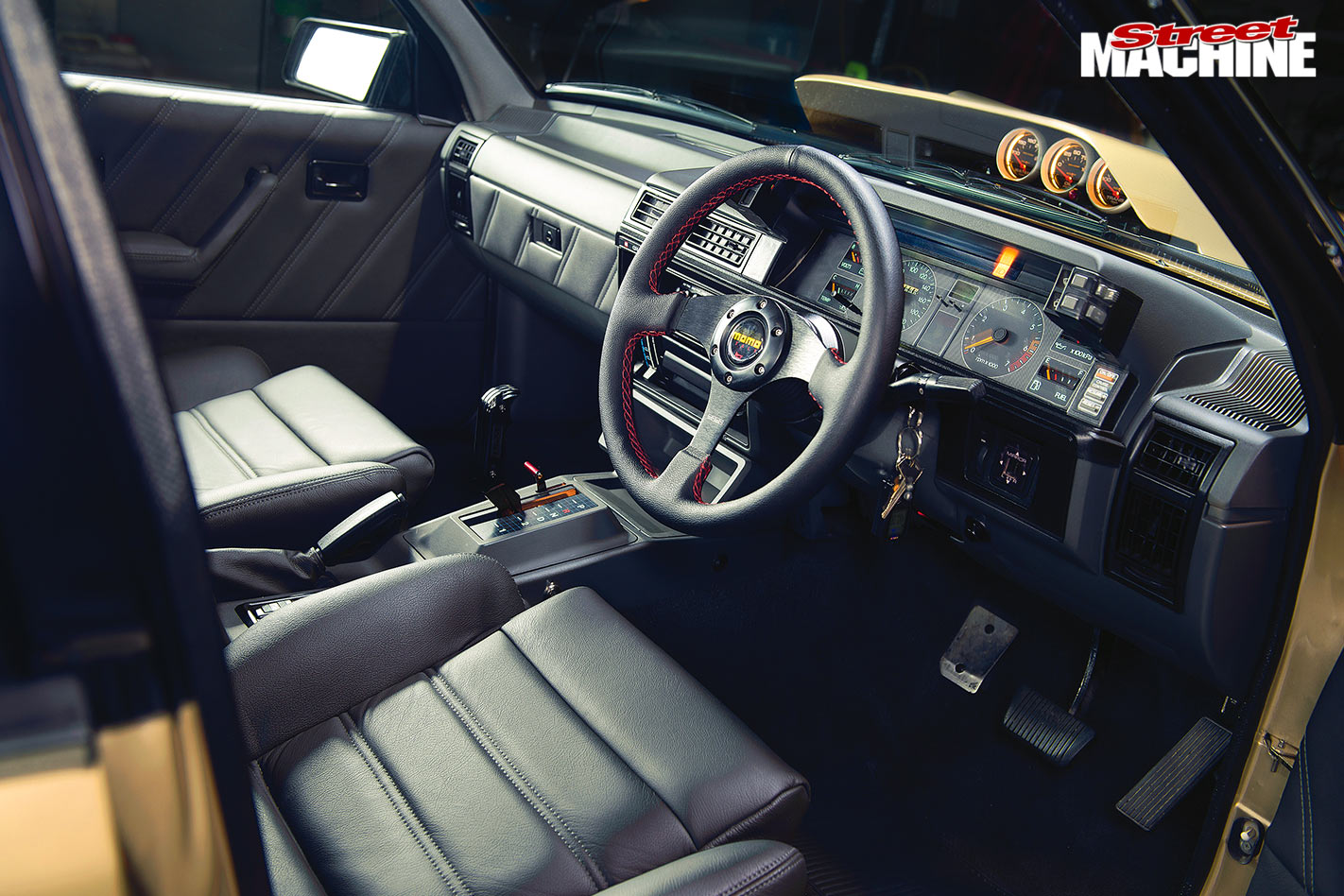 Dimi played the KISS theme and kept it simple inside to great effect. That cowl scoop ended up being the perfect place to hide a trio of Auto Meter gauges from the prying eyes of the constabulary

Dale Heiler from Castle Hill Exhaust and Performance tuned the VL through a reflashed factory LS1 ECU, rewired by Dimi to suit the early shell. Without leaning on the car, they saw 700hp at 14psi, which they figure will do for now. 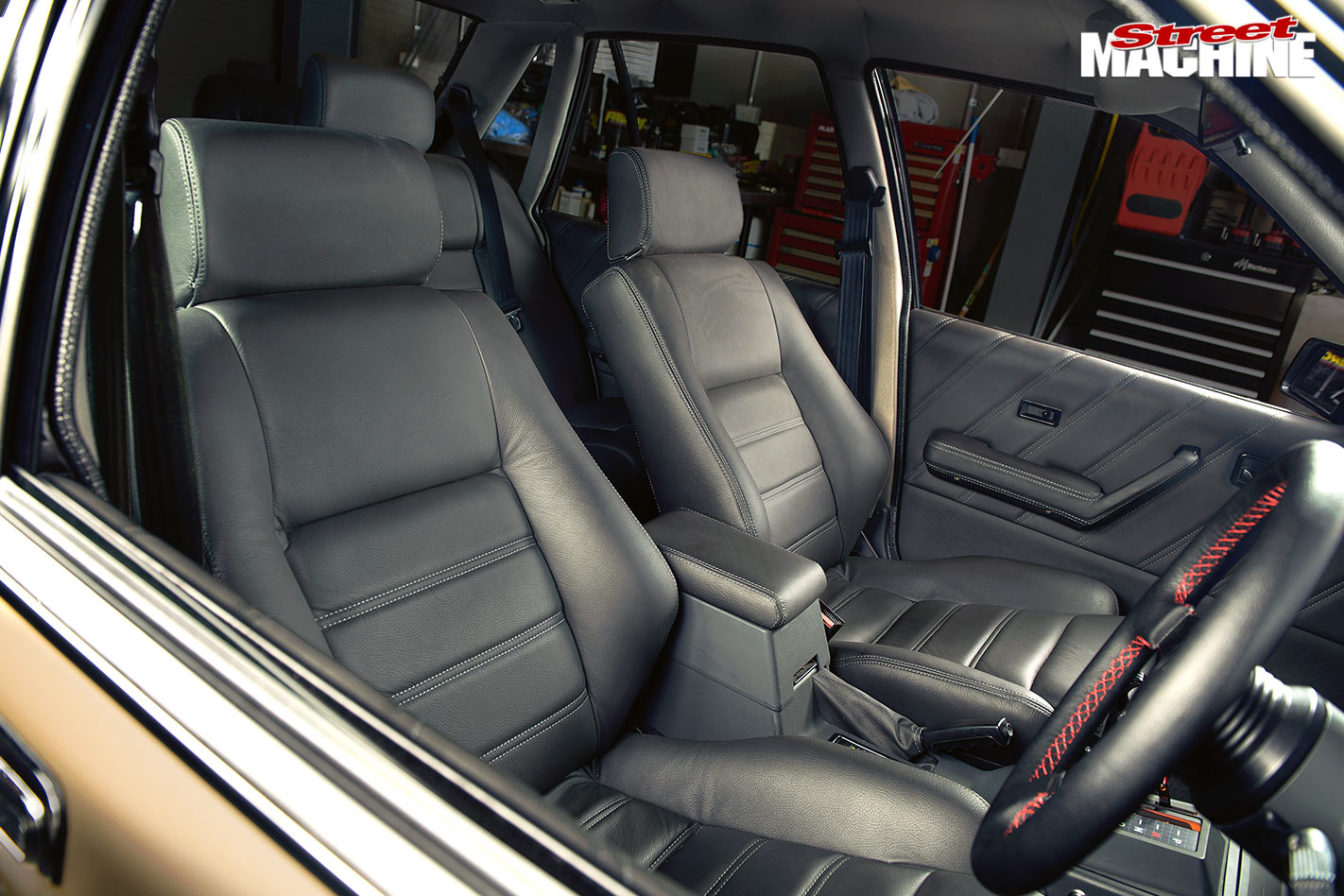 Even though it was just meant to be a powerskid pig, Dimi had the interior done. Retrimmed in period style, the front seats are rare pieces made by Scheel for the VN-era HSV SV88 special edition

Dimi went for a TCE 3600 converter ahead of a two-speed Powerglide for the transmission. The set-up might not be best for brutal 60ft times, but it works better on the street. A custom single-piece tailshaft torques a BorgWarner diff complete with mini-spool, 31-spline axles and street-friendly 3.45:1 gears to allow comfortable freeway revs when out on a cruise. 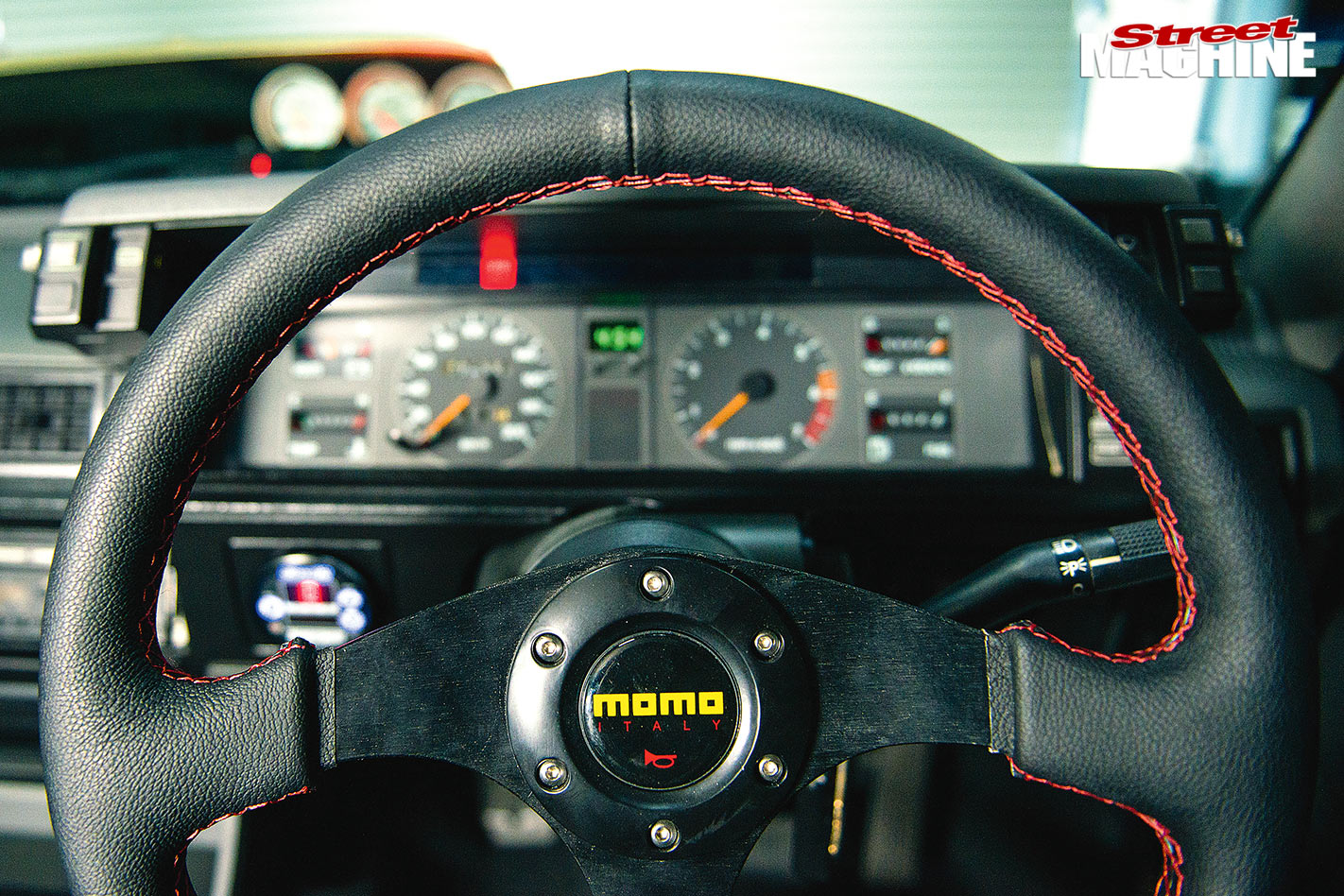 MOMO’s iconic Race steering wheel perfectly suits the 80s-fresh interior without being retro-kitsch. The benefit of using a Calais as a base is a full complement of gauges and warning lights from the factory!

Suspension is simplicity itself, with Pedders coil-overs and Nolathane bushes, while VT Commodore front brakes help slow it all down. They sit pretty behind the tough 17x4in Weld AlumaStar fronts and 15x10in Weld RT rears, lending a real Pro Street attitude to the Calais.

“The car was built after-hours in six months by somebody with no real mechanical background,” Dimi says. “I did all the fabrication and assembly of the car myself, and everything went pretty smoothly. There have only been minor bugs and hiccups, which is to be expected from a ground-up build in a short period of time. 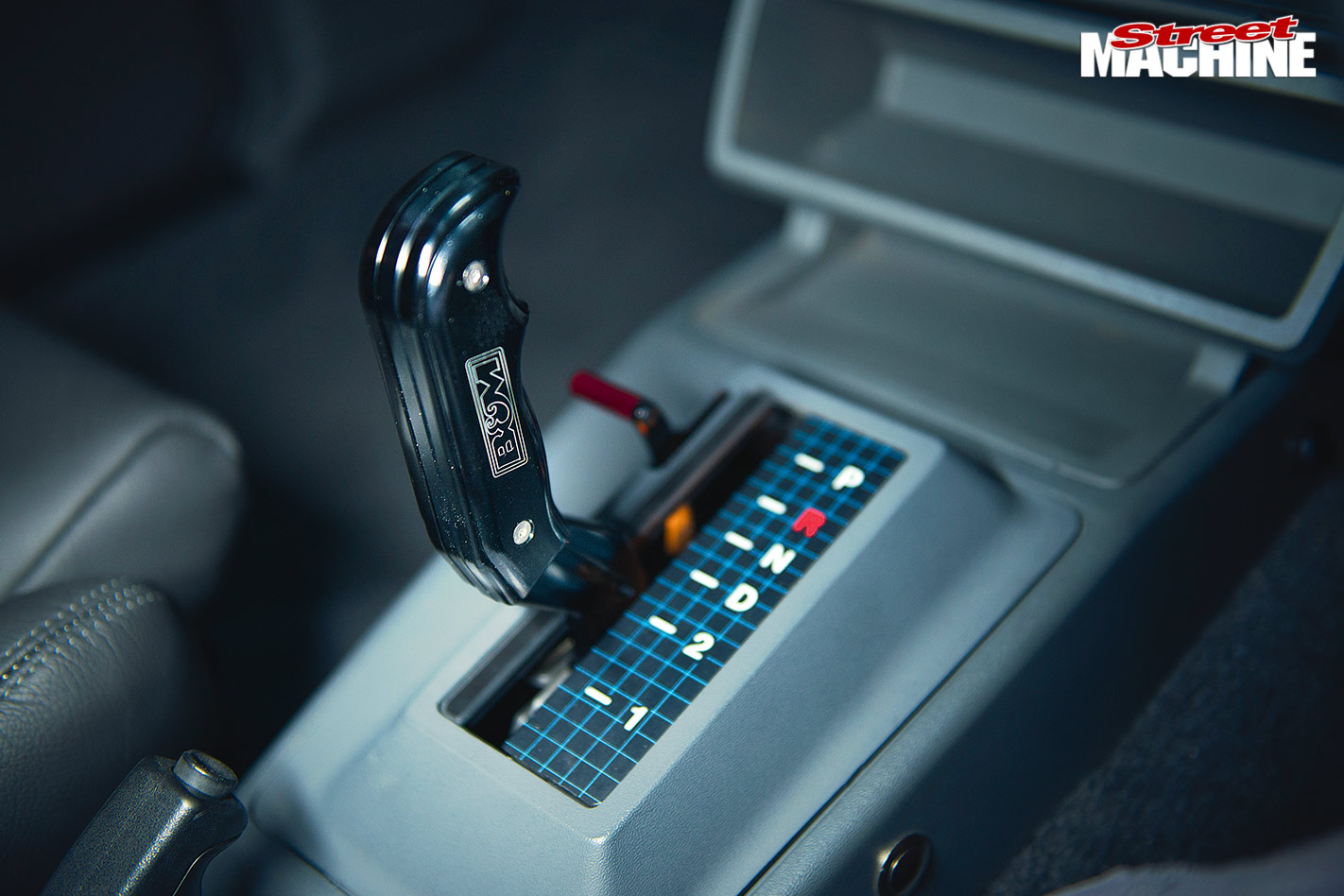 The Stealth Pro Ratchet shifter is the big giveaway that this 80s icon is packing serious 21st-century heat. But how cool are the factory VL instrument and shifter graphics?

“The car has only been finished for a few weeks now and I’m catching up on some sleep and family life. The VL was built for the street and that’s where I intend to use it, however a trip to Heathcote definitely is on the cards.”

Dimi isn’t resting on his laurels, either, with a far more serious drag-only VL already in the build. Talk about collecting the full set! 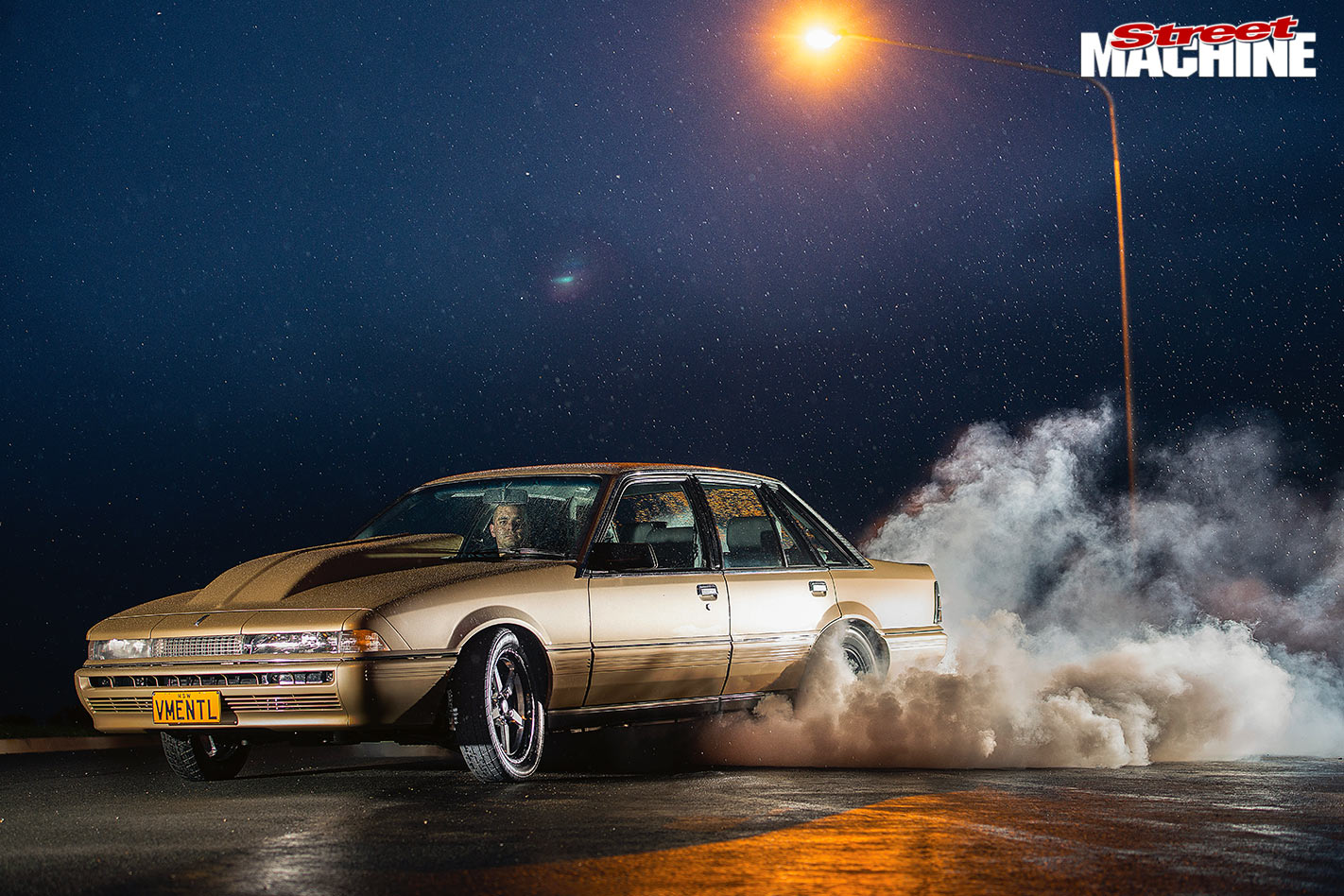 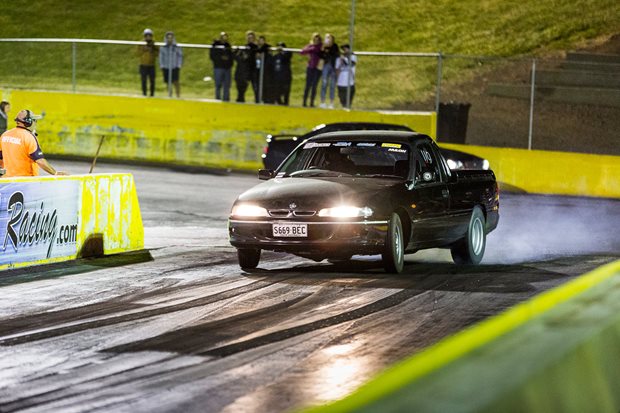 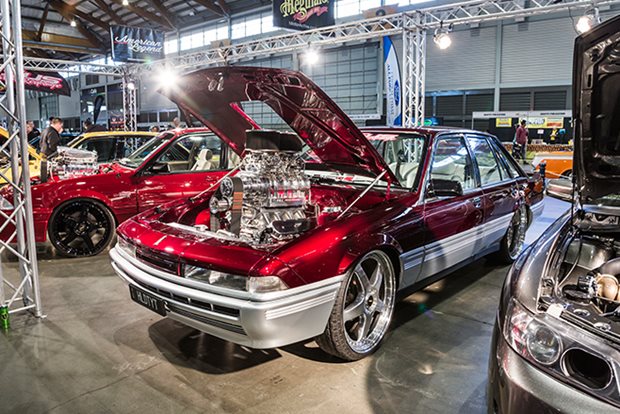