TYLER Montesalvo knew he wanted a tough street car right from the outset of his latest build, but he never imagined his idea would become this super-slick, nickel-tough Holden LX Torana. Sporting a turbo LSX, tube-arm front end, mini-tubs and four-link out back and arrow-straight panelwork, it looks just as ready to collect trophies at a show as it does to collect scalps at roll racing. 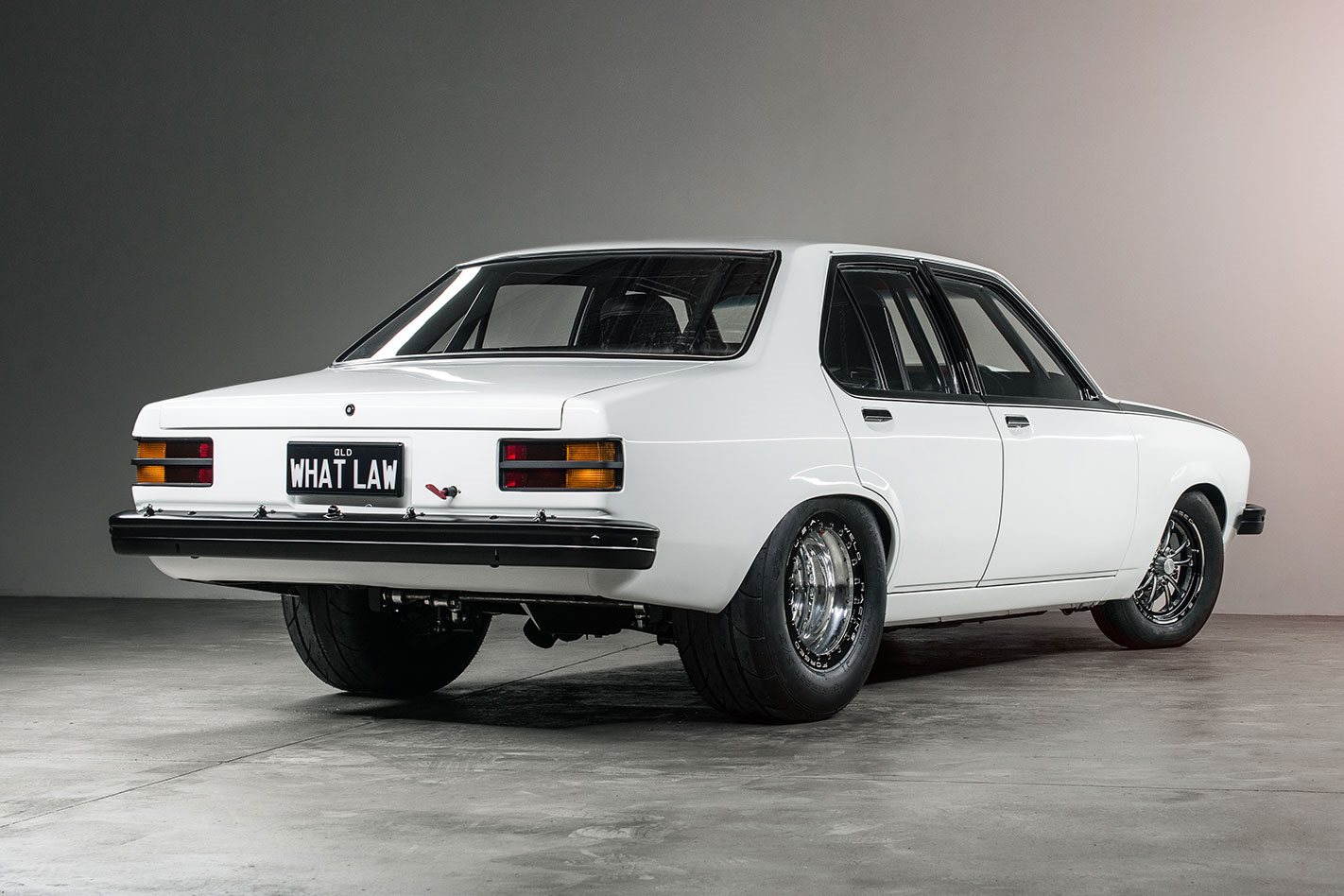 Tyler’s LX has an awesome stance, due not only to the fat 15in Weld Racing wheels but also to the Strange coil-overs holding the shell off the ground

“I always liked the LH/LX and VK/VL shapes, and have seen a few tough ones at different events,” Tyler explains. “But I decided there were too many turbo LS conversions in Commodores, and a mate decided to sell his Torana so I snapped it up. 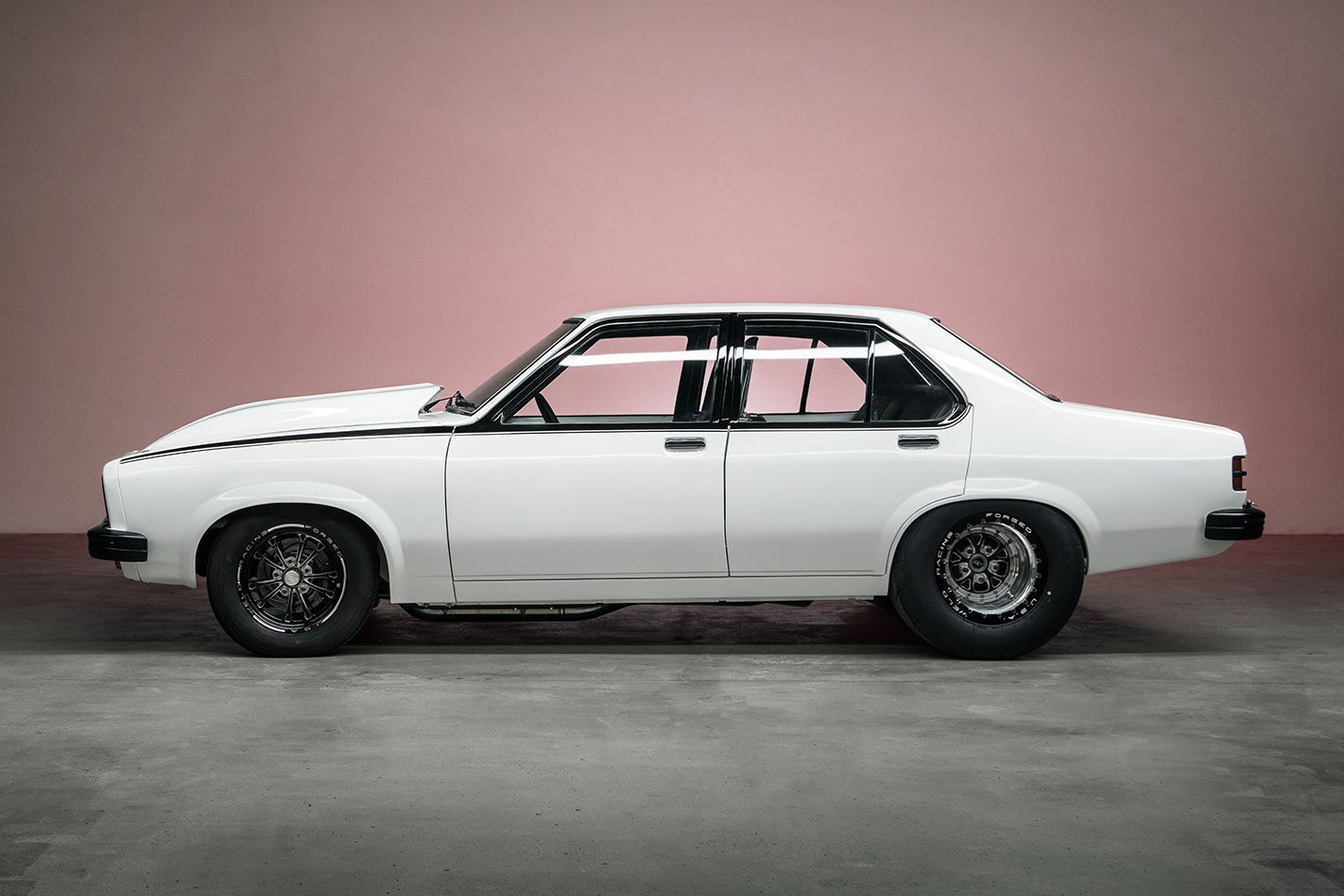 Tyler chose to update the steering with a Billet Works column, while the brakes have all been replaced with Strange discs up front and Wilwood discs out back, with a Wilwood master cylinder

“I don’t really know why the car ended up with the turbo LSX, as it was originally getting a built LSA engine with forged pistons and rods. But then it got away from me and that plan went out the window halfway through the build, so I sold that engine. Dallas and Kent at Hi-Torque Performance organised [the new engine], based off an LSX block.” 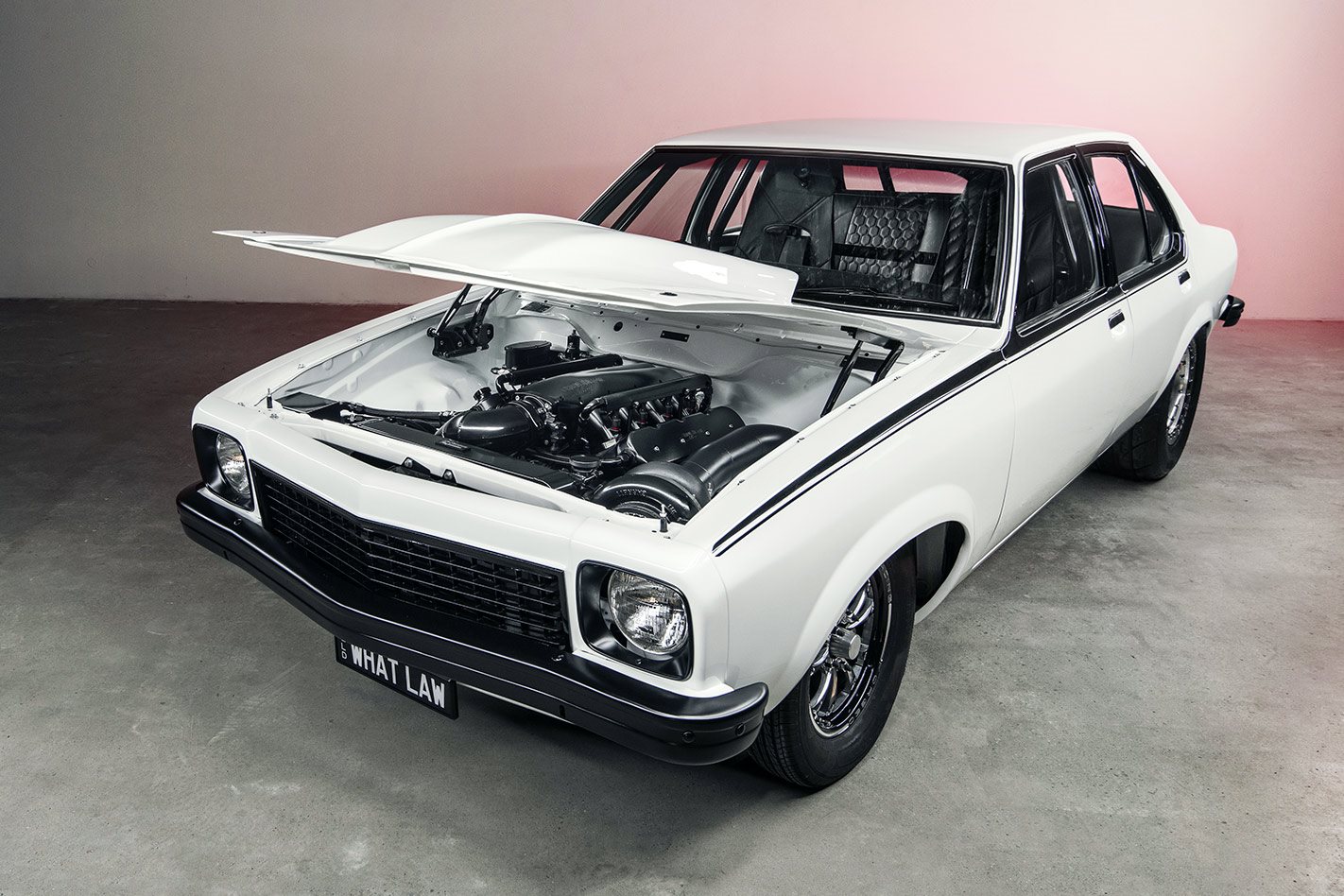 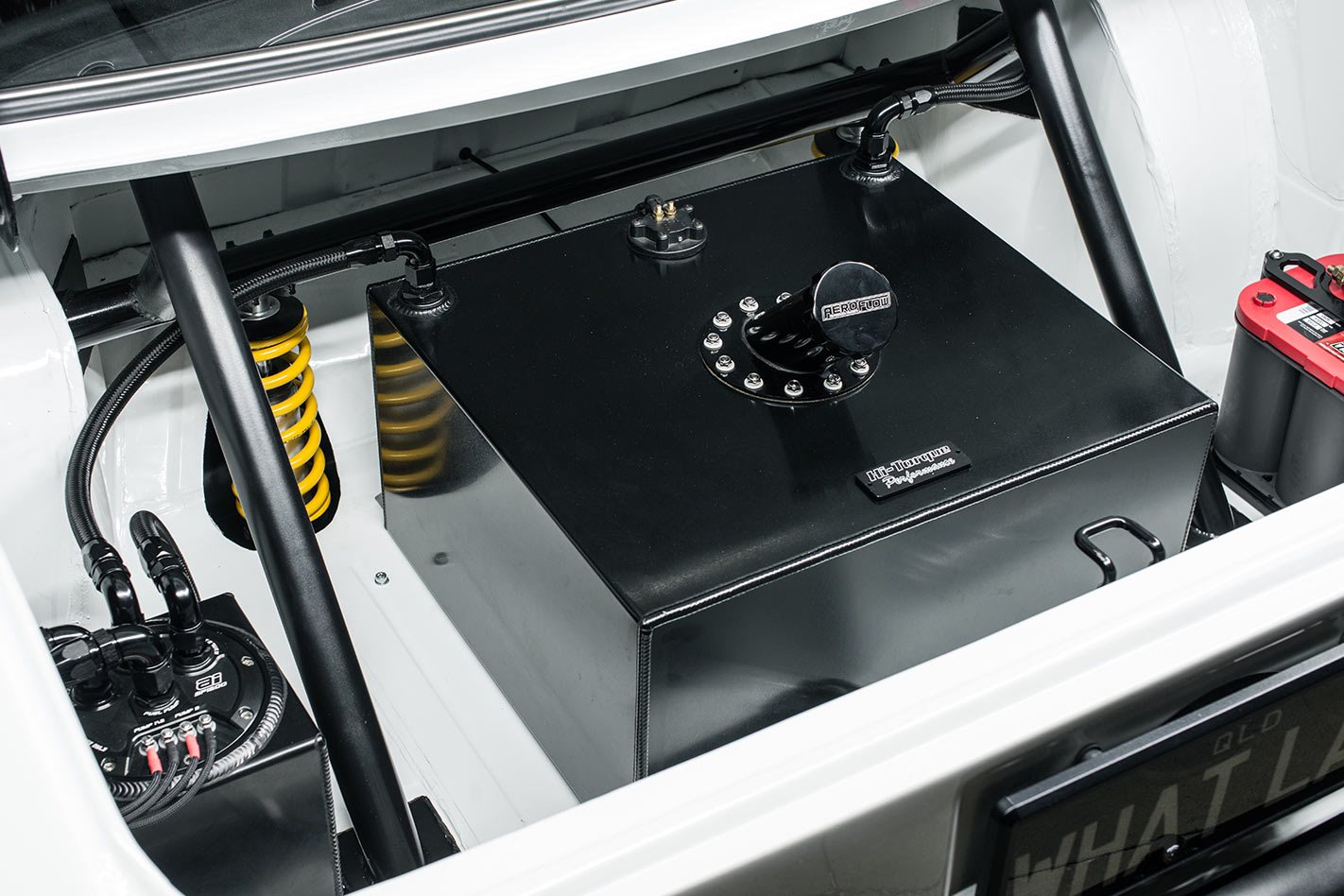 Oiling comes courtesy of a Moroso oil pump and Milodon sump, with a custom PWR radiator and a pair of SPAL thermo fans looking after the cooling duties. Up front, the billet-wheel Garrett GTX47 turbo swallows air from custom manifolds and blows charge-air into a front-mounted air-to-air intercooler, all fabricated by Spot On Performance, who also did the single four-inch exhaust and side-pipe. A Haltech Elite 2500 ECU fitted by Ash from Wiring & Tuning Solutions runs the whole shebang, with Haltech-supplied LS1 coils igniting the boost-friendly E85 provided by 2400cc injectors and a trio of Walbro 460 electronic pumps. 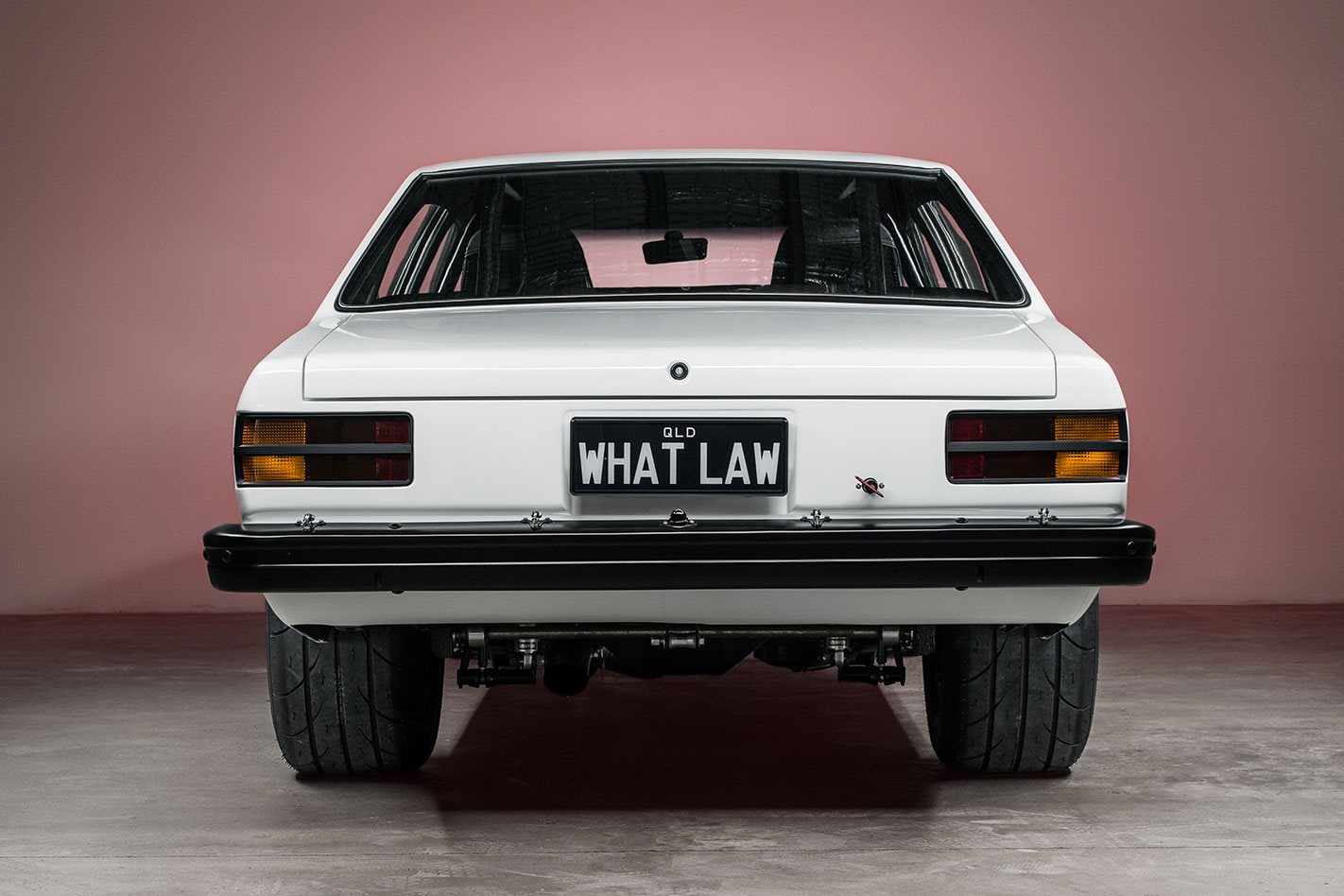 All up, the 403-cuber churns out 1050hp at the wheels on 22psi, which should be plenty to give passengers a fright during Hour of Power sessions at Powercruise!

The 1500hp-rated Powerglide was built by Dave at Mr Transmissions off a Reid case, while a 3500rpm Converter Shop torque converter hangs off the back of the LS. A single-piece chrome-moly tailshaft connects the drivetrain to the sheet-metal nine-inch diff filled with 35-spline axles. 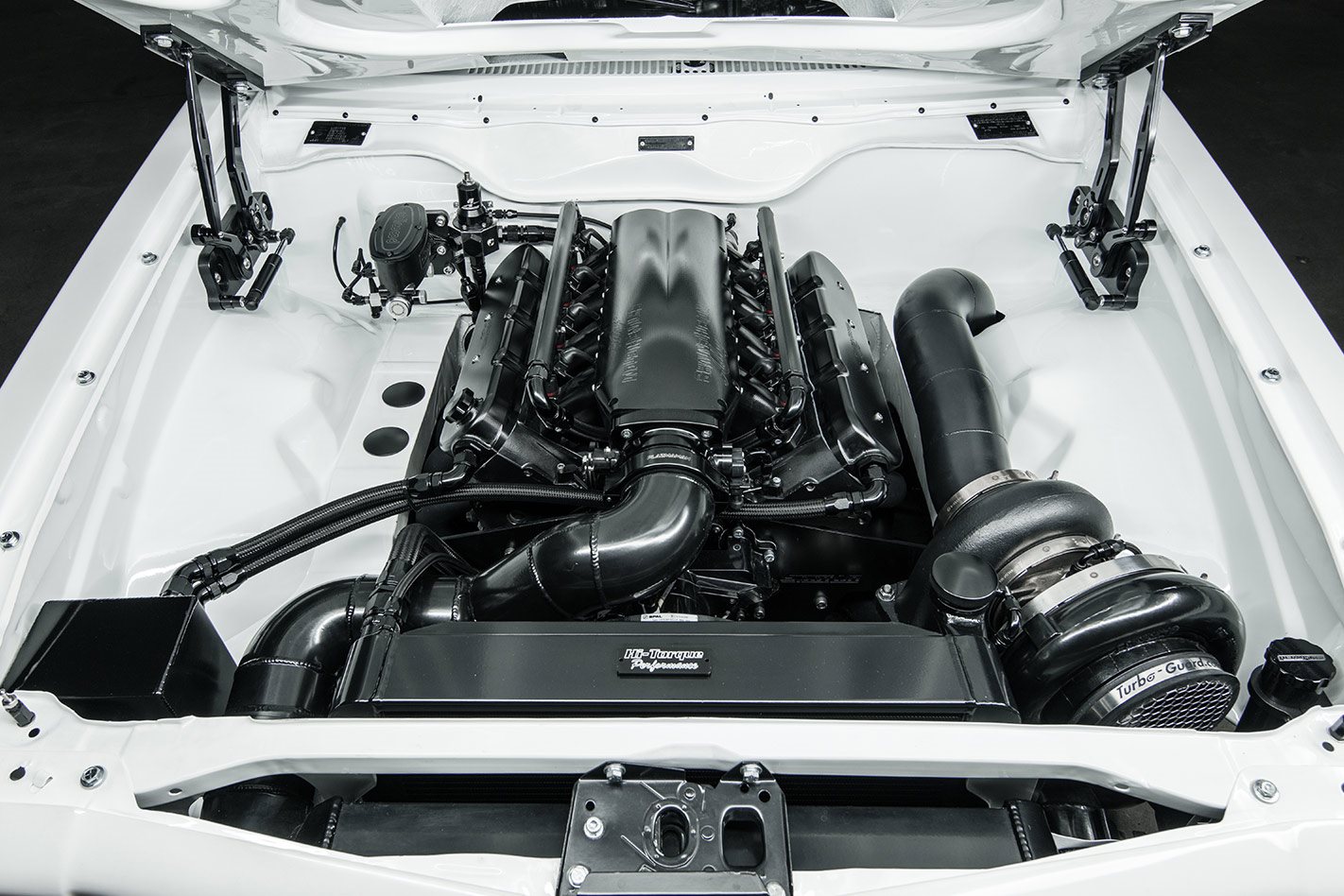 Hi-Torque Performance has made a name for itself over the years with mega-horsepower turbo LS engines built off the venerable LQ9 iron 6.0L block, but Tyler’s motor features some of the best gear the LS world has to offer, from its iron LSX base to the Racing Head Services LS7-spec cylinder heads

Aesthetics-wise, Tyler’s car is a ripper, with the stark white Baslac paint showcasing the sedan’s clean, straight lines. But it wasn’t always so neat. When Tyler got the LX it was a poo-brown roller, which he sent straight over to Nathan at RAR Embossed to be straightened and smoothed, featuring a shaved firewall and a sheet-metal rear end to go around the tubs. Ordinarily this comes after the metalwork is done, but Tyler didn’t quite follow the rule book. 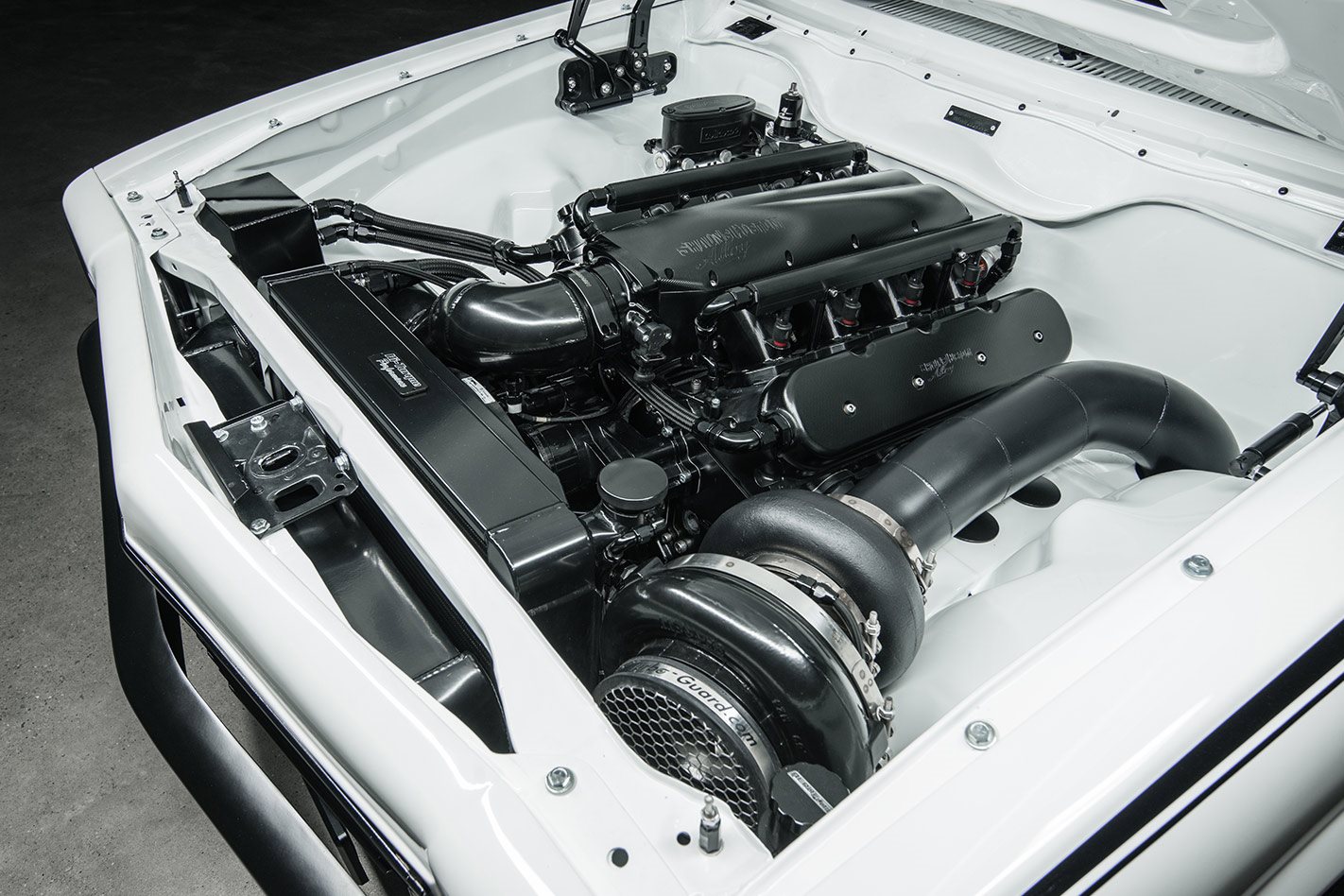 With the stock firewall and inner guards smoothed out, the all-black motor really stands out!

“I had the car panel-beaten and painted by Nathan at RAR prior to most of the fab work and engine being fitted because I was impatient,” Tyler laughs. “From there I had the motor dummied up at Hi-Torque to make sure it was going to fit, and then sent it to Spot On Performance to get everything fabbed up. 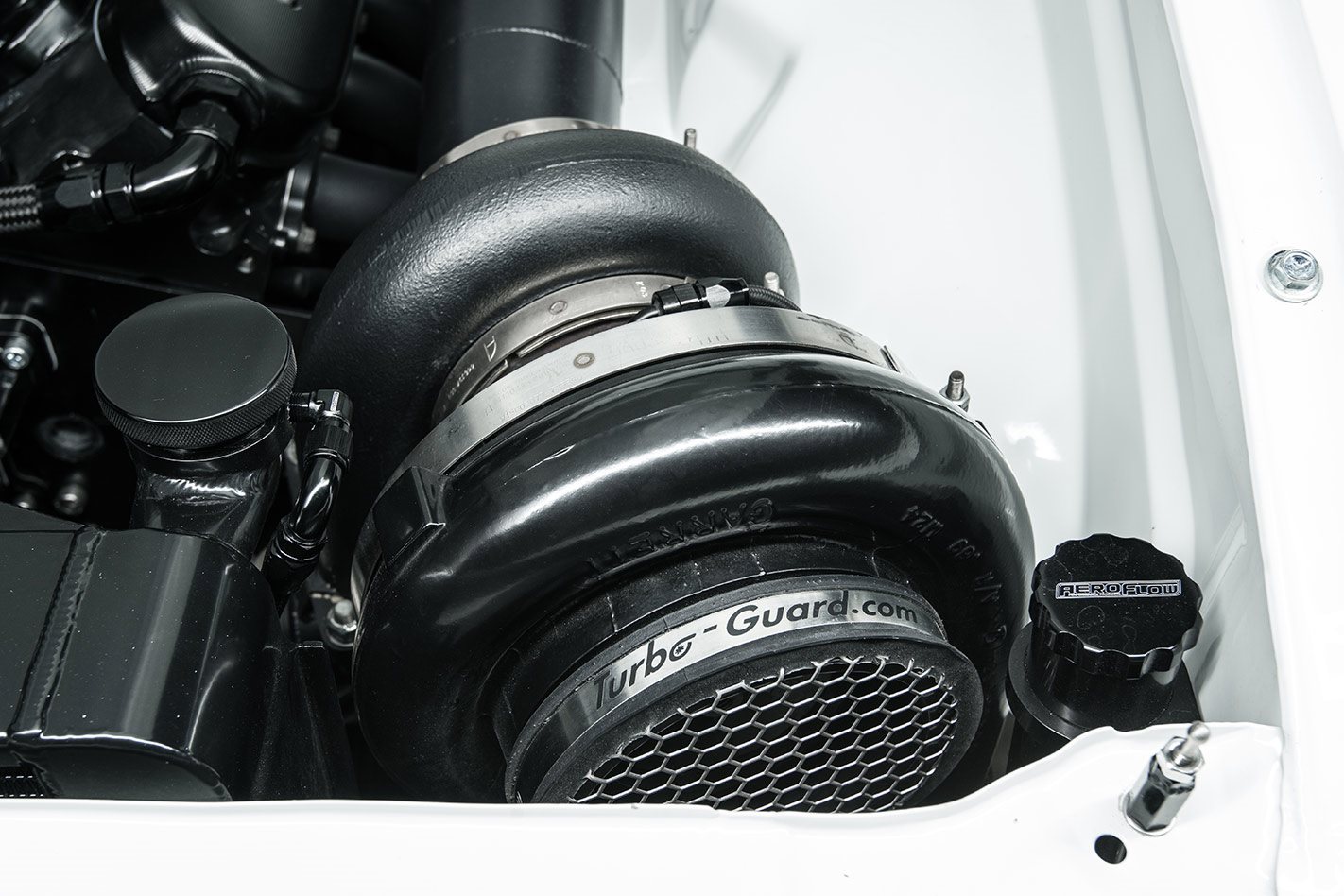 “We ended up having to cut more off the front, redo the turbo side of the engine bay so the Garrett GTX47 would fit, and re-cut the hole for the dump pipe because the existing work done by a previous shop didn’t work. Once the boys had finished with it, the car went back to RAR to get the engine bay all fixed up and painted again.

“Spot On Performance did all my fabrication work including mounting the turbo and making the intercooler, headers, dump pipe and exhaust,” he continues. “They whipped up a custom drag wing and ’chute, they fitted my Kirkey seats and got everything all powdercoated for me. If you want the best fab work and quickest turnaround I’ve ever seen at a shop, go to them!” 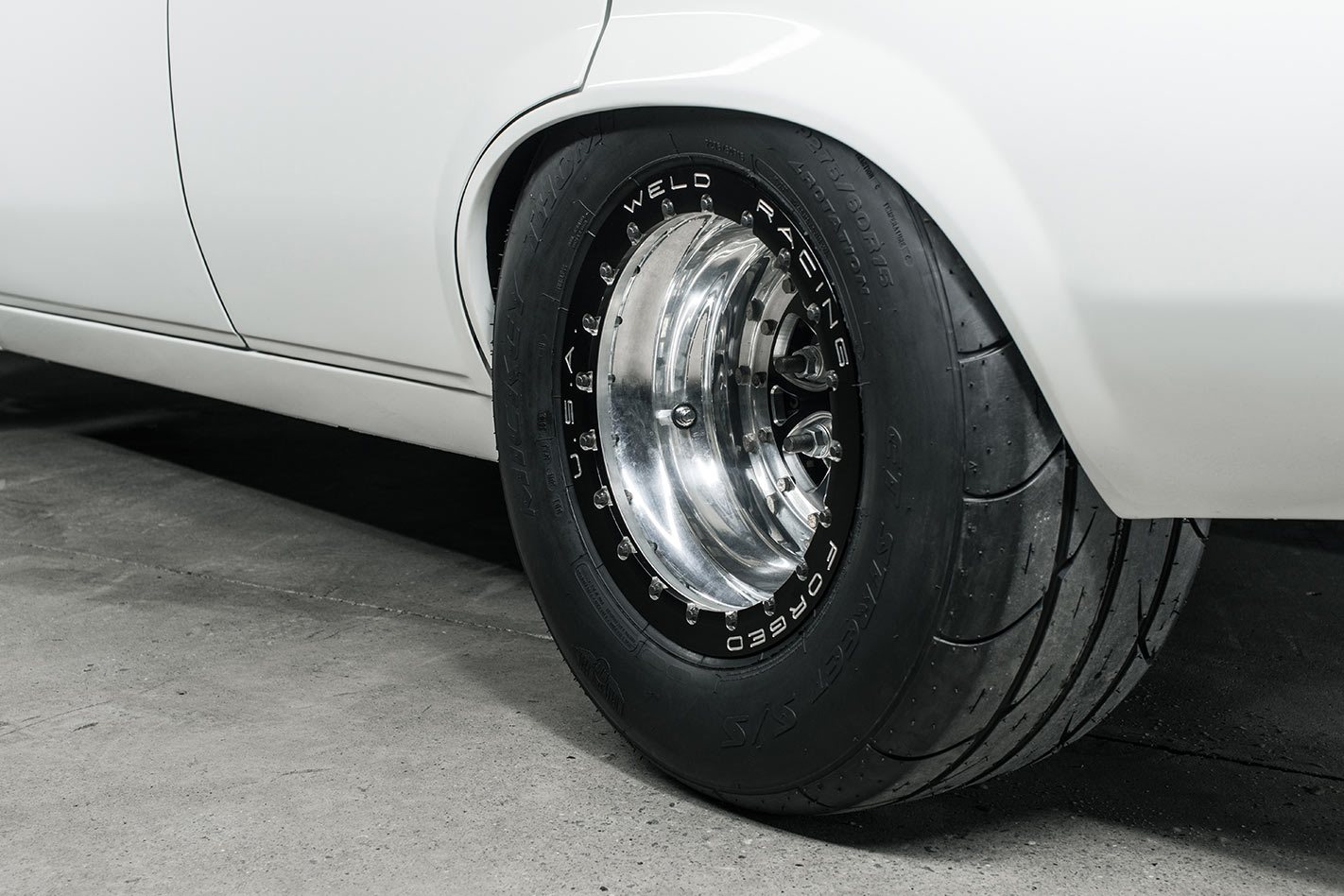 Black Diamond Wheels & Suspension hooked Tyler up with the 15-inch Weld Racing V Series rims, running cheese-cutter 3.5s on the front and meaty 10s on the rear. Nankang 165/80 front-runners are offset by 275/60 Mickey Thompson ET Streets in the rear, although Tyler initially hoped to run a different M/T tyre.

“I’ve had dramas with my wheels and tyres scrubbing, so I changed from an M/T Pro Radial to an ET Street in the hope that it would fix the problem, but it hasn’t. I’m actually getting some fab done at the moment to sort it out. 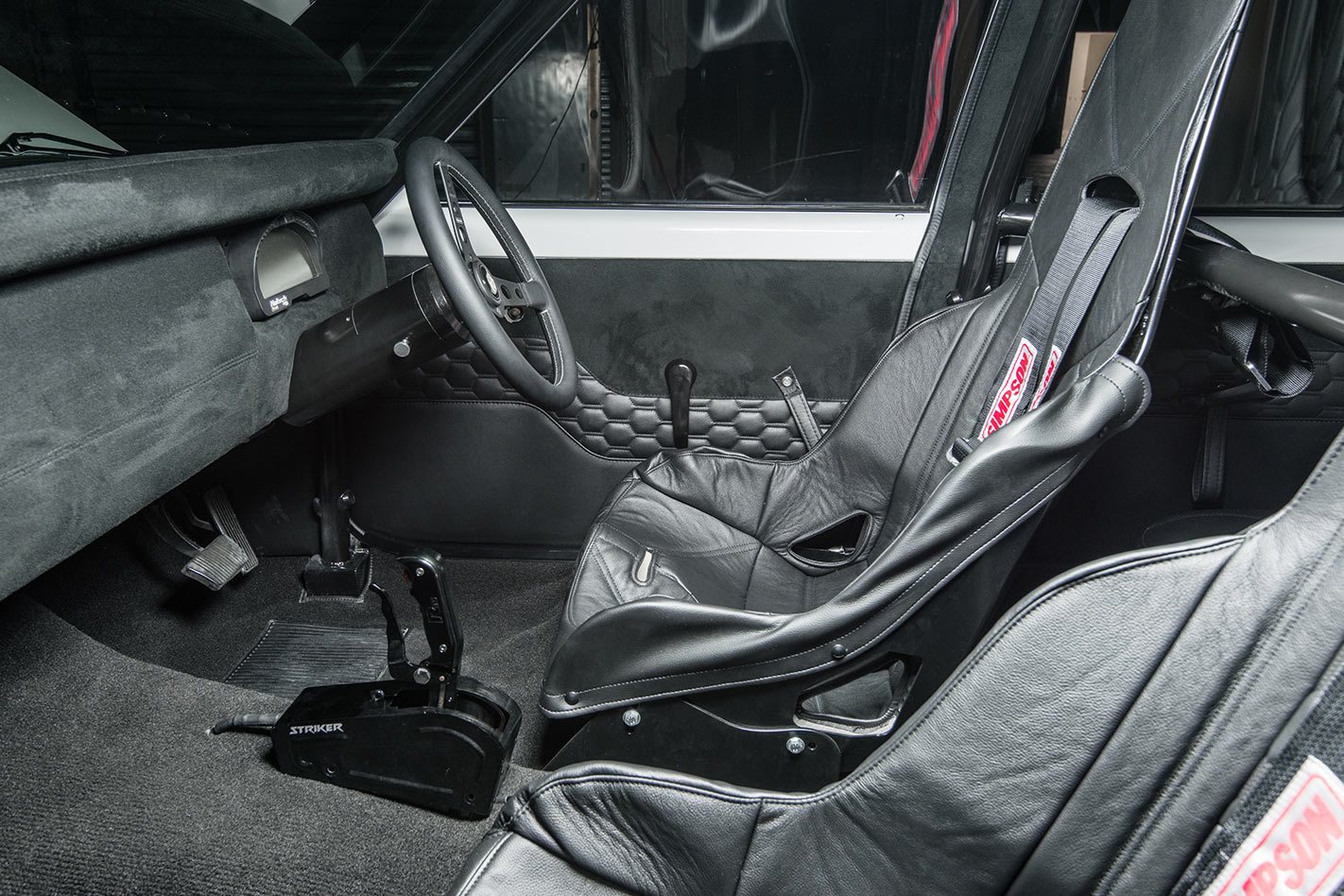 It’s all business inside the LX, with Kirkey race seats trimmed in leather covers up front and the original rear seat and door cards retrimmed to match. The dashboard has been replaced by a custom suede-wrapped shell featuring a Haltech IQ3 digital display, while the shifter is an RTS Striker unit featuring a transbrake button for wheels-up launches

“I built it as a street car and it wasn’t supposed to end up this crazy, but at least it is all done properly and only done once, not over and over like my old car,” Tyler concludes. “During the run-in period I’ve been driving it every day when it hasn’t been raining. I want to drive it as much as possible!”

With such an awesome car in the garage, we’re not surprised! 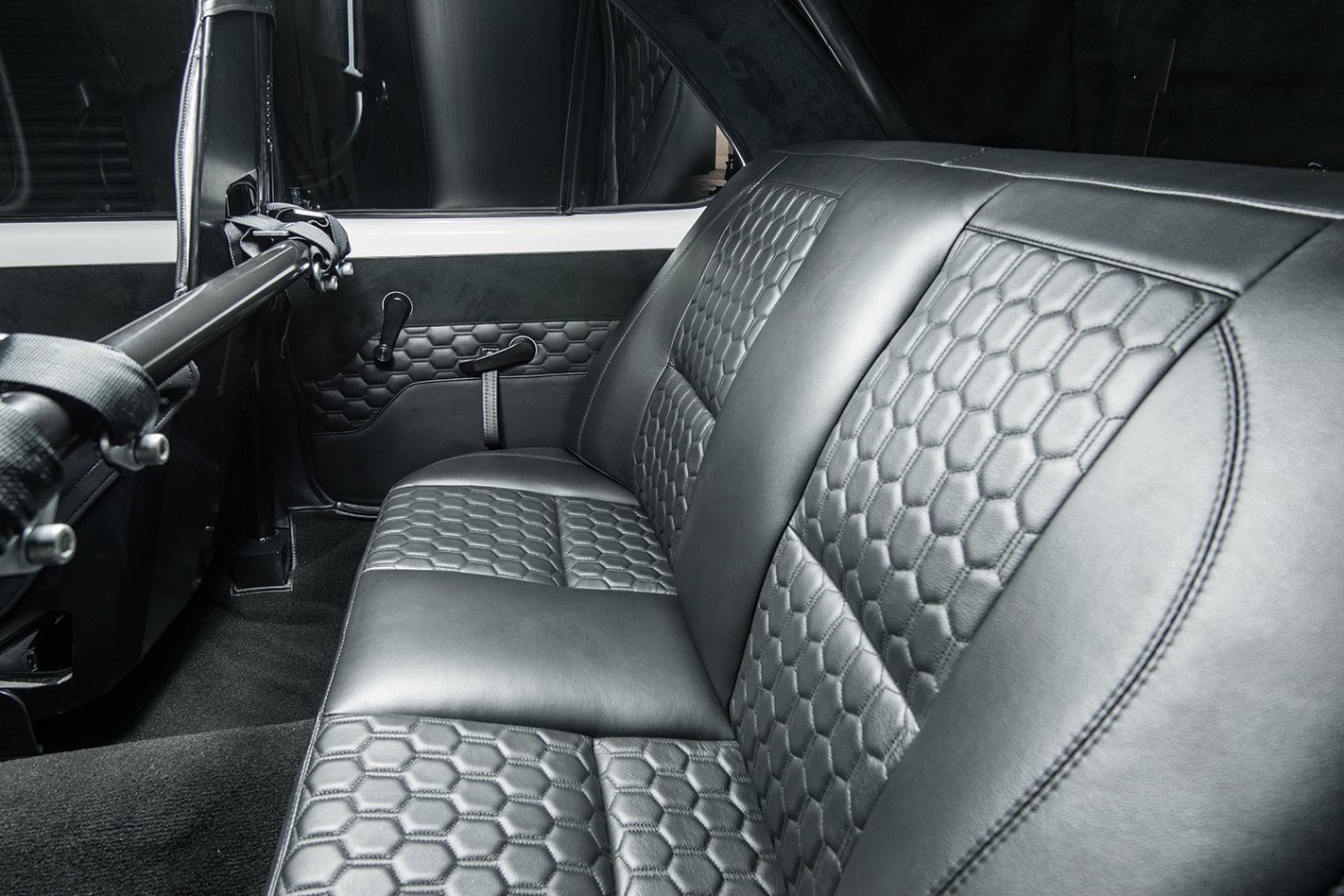