Squeezing 1200 horses beneath the bonnet of a wild Falcon ute

John Huysmans's Ford Falcon XW ute might look like just a nice, clean streeter at first glance, but he's found a way to hide 1200 horses under the bonnet

HAVING owned plenty of strip-only weapons, John Huysmans thought it was about time he built himself a registered one. That’s how this tough-as-nails, XY-fronted XW ute came about. 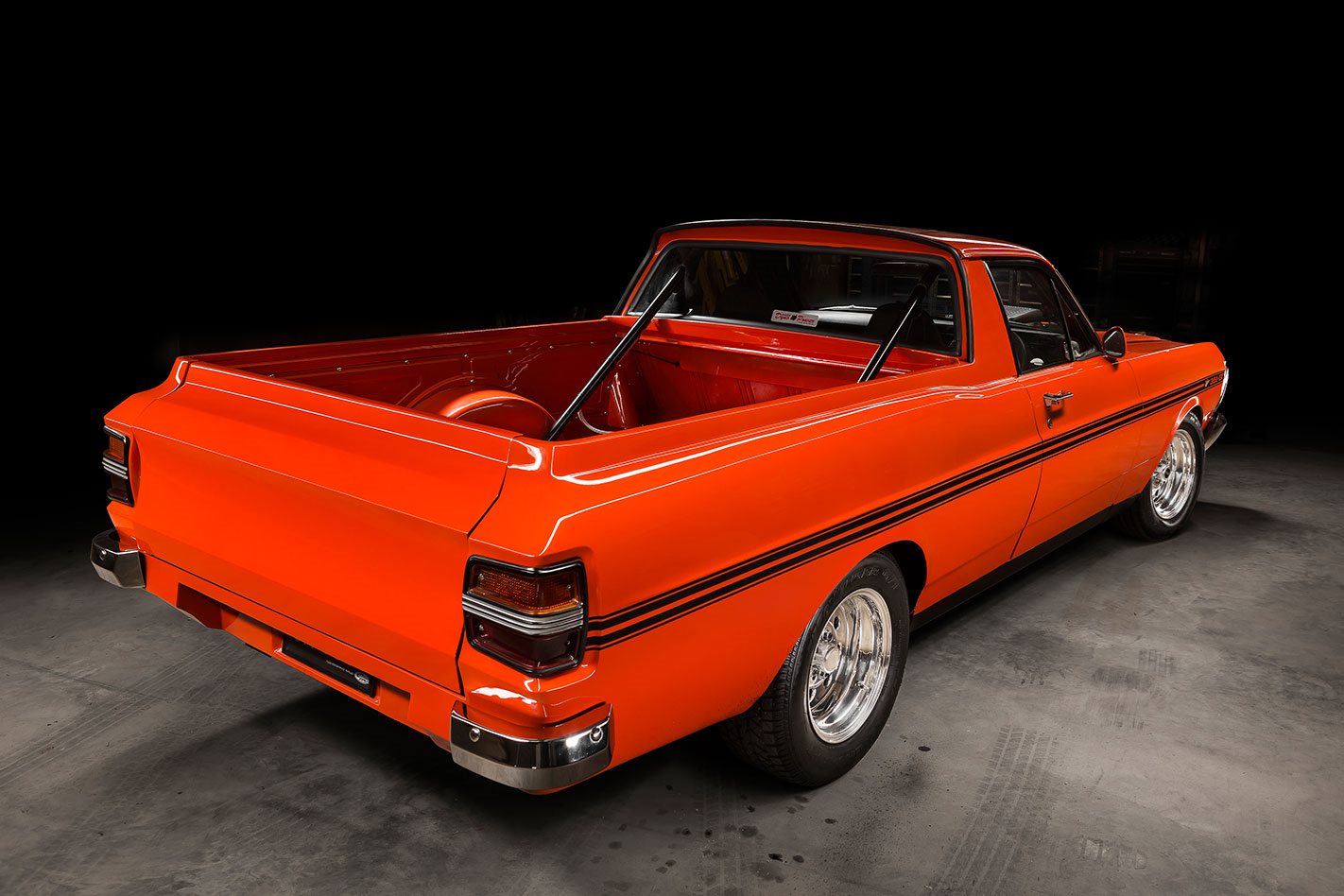 “Nobody suspects it’s packing 1200hp,” says John, from Orange, NSW. “I can pull up at the servo and just putt around without attracting too much attention.”

The 50-year-old has been playing around with race cars since he was 15. “I just love racing; it started with an 11-second LJ – I was very young and it was way too quick,” John laughs. 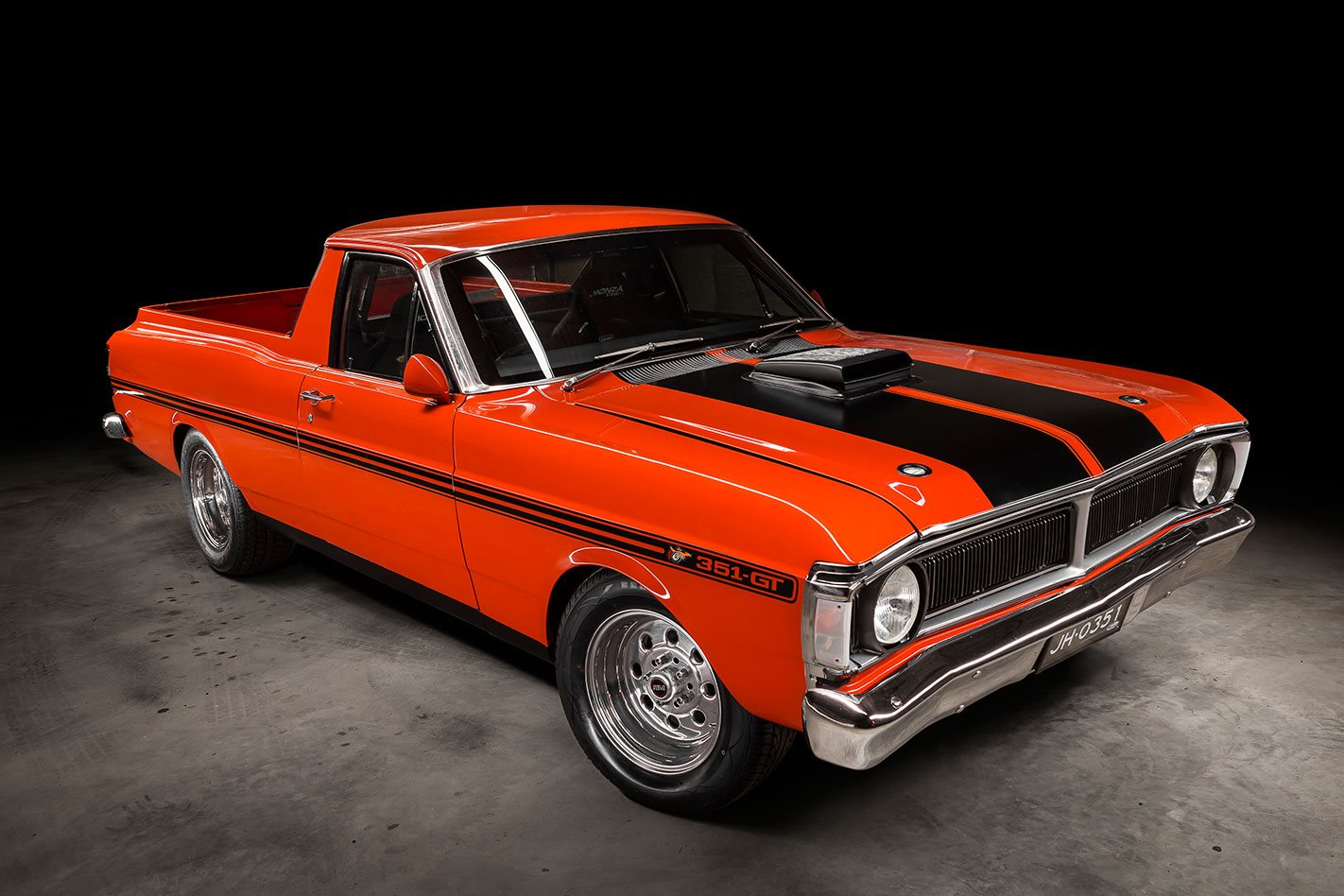 John’s goal with the ute was to build a quick street-based car that could be registered. With 8sec timeslips on the horizon, you’d have to say he nailed it

A few other cars followed, before John moved onto a 351 Windsor-powered Capri that won a lot of races, running a best of 10.1@134mph. Then John got busy with other stuff, and after not running the car for years, he ended up selling it. But as the Street Machine faithful know all too well, once it’s in the blood, Racer’s Disease is all but incurable.

“Five or six years ago I started following Hot Rod Drag Week in the US,” John says. “I thought: ‘Now that’s a challenge.’” 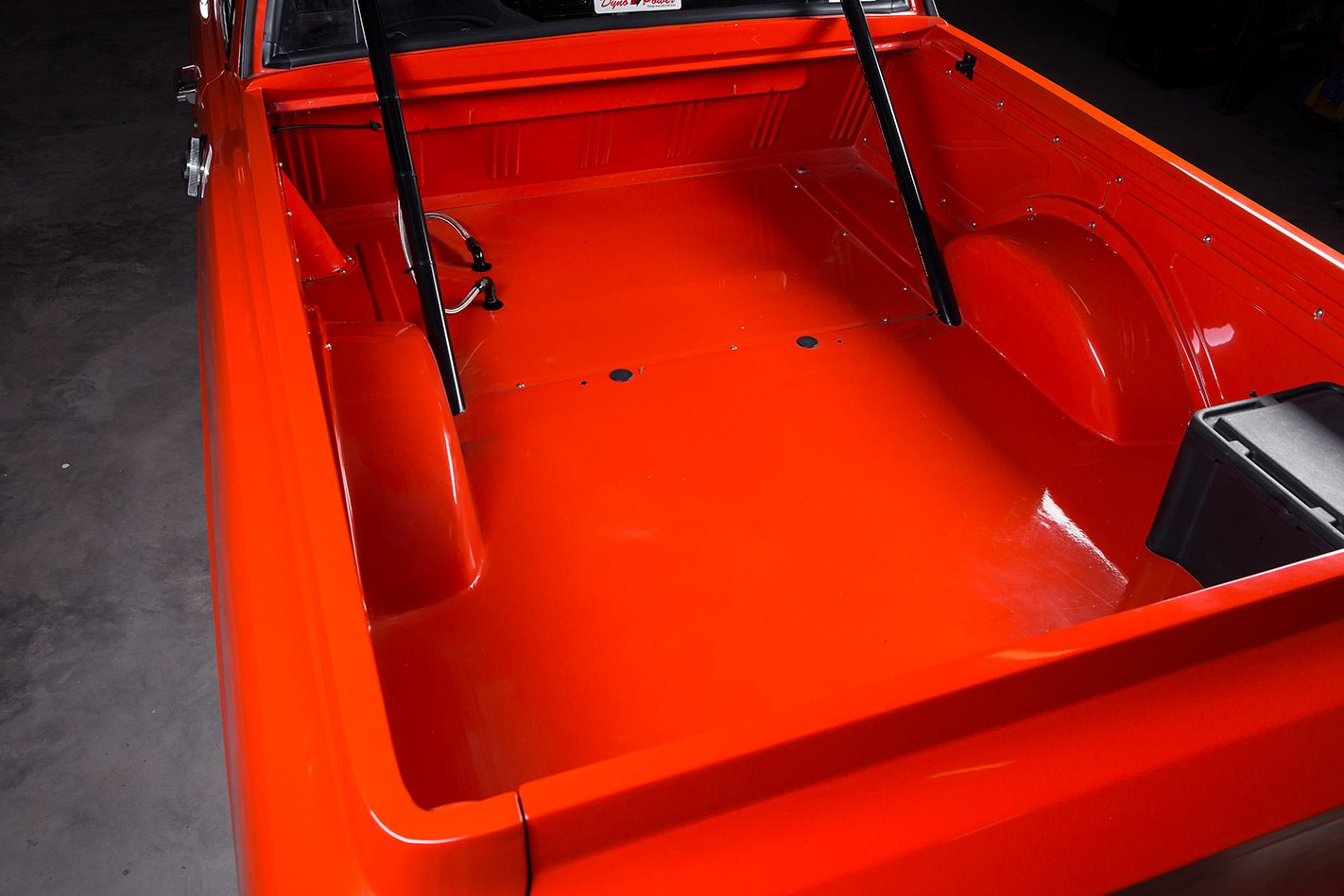 “I wanted a street car where nobody knew what I had,” John says. “You can barely hear it; it’s like a 351 with a cam. In fact, the solid-roller lifters make more noise than the exhaust”

So shortly after adding ‘Compete in Drag Week’ to his bucket list, a reasonably clean-looking XW ute came along. It was the perfect basis for a Drag Week challenger – a street car he could race!

Back then only a handful of cars at Drag Week were in the sevens; any car running consistent eights was class-competitive, so that’s what John set his sights on. 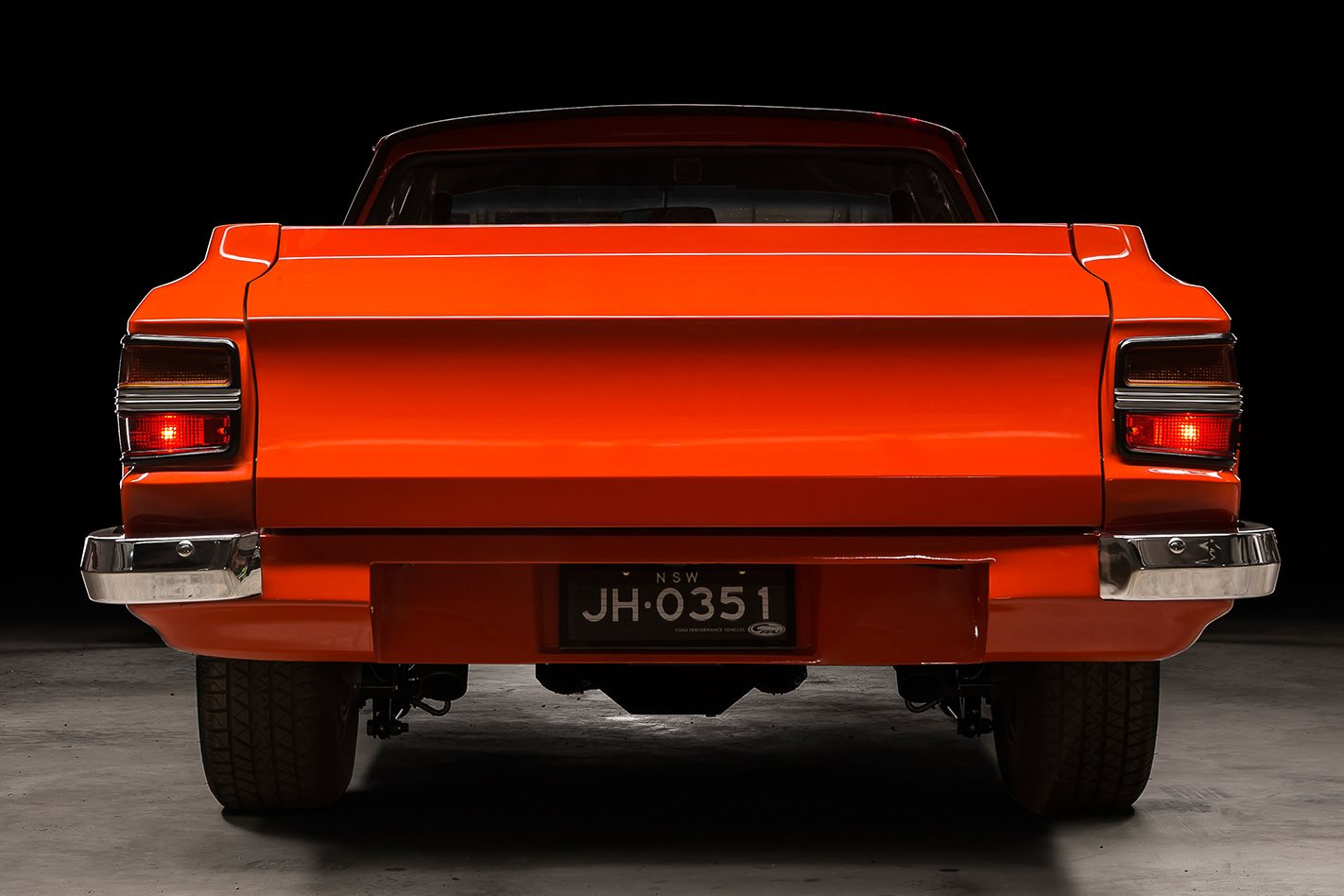 The XW runs XY tail-lights and front, and is all steel, with full glass and full interior. It weighs 1700kg, which is pretty heavy for a car with 8sec aspirations

A twin-turbo, EFI, 429-cube small-block was deemed to be the combo to run the number. Kim Baker from Baker Precision Engines looked after the specs and all the machine work, while John screwed the formidable mill together himself at home in the shed. 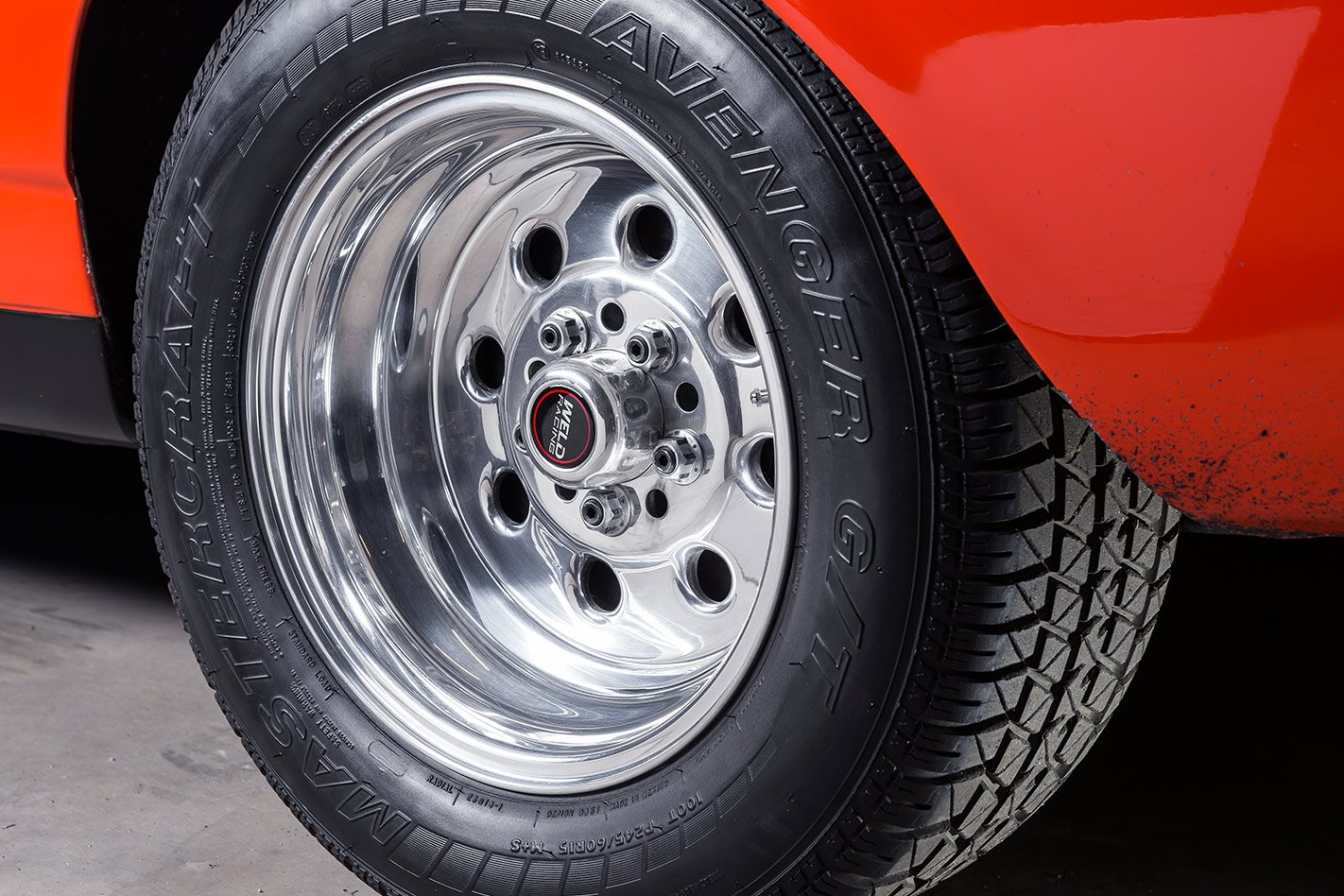 For the street, the ute wears old-school 15in Mastercraft radials. At the track, they make way for Moroso front-runners and Mickey Thompson X275/60R15 ET Radials

On one of his trips to the States (including one with Ross Preen when he went over to cackle his FED, Banshee, at the Bakersfield 20th Anniversary), John and his brother Tony dropped into Turbonetics to pick up a pair of 67mm hairdryers. They also swung by Hogan’s Racing Manifolds to collect a custom intake – a high-flow unit that kept everything under the bonnet. Mr Hogan was feeling particularly hospitable, giving Tony and John the grand tour of the normally top-secret premises. 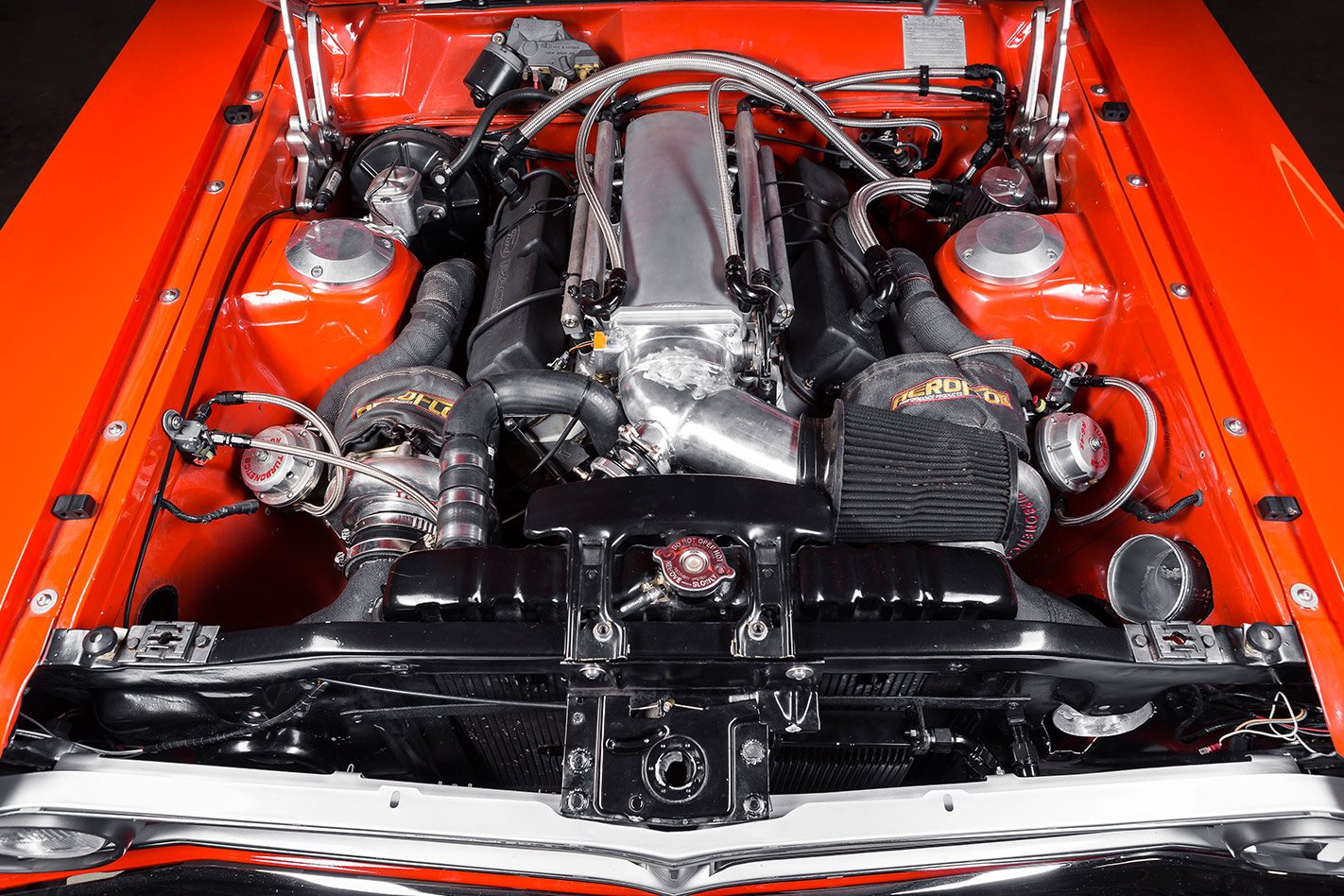 Talk about a tight package! The engine bay may be a wee bit cramped, but the twin-turbo, EFI 429ci Windsor is good for 1150hp@13.9psi – with more to come

John is very hands-on, preferring to tackle as much as possible himself. He’s taught himself to be a pretty handy fabricator; he’s even learnt EFI programming. But one area where things didn’t work out as planned was the turbo manifolds. After unsuccessfully attempting to weld the steampipe himself, John enlisted an expert welder to get ’em right. 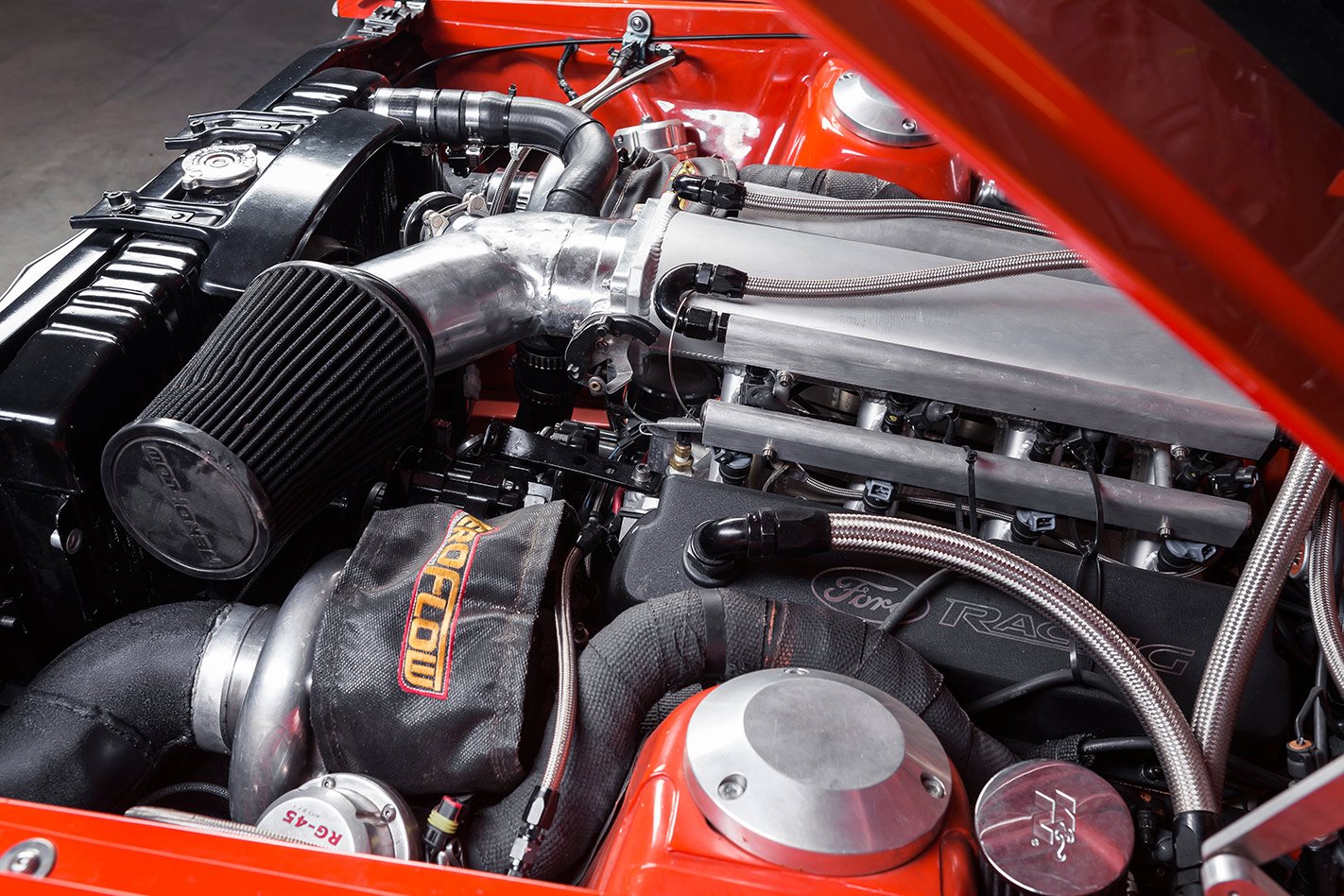 To fit all the turbo plumbing and help the handling, the ute was outfitted with RRS struts and the company’s optional tower-notching kit. John’s also pretty happy about the improved braking from the beefy RRS stoppers.

John’s brother Tony was a tremendous help throughout the build, especially on all the hard stuff like the intercooler plumbing. With engine and plumbing finalised, the ute was stripped and sent to the sand blasters. 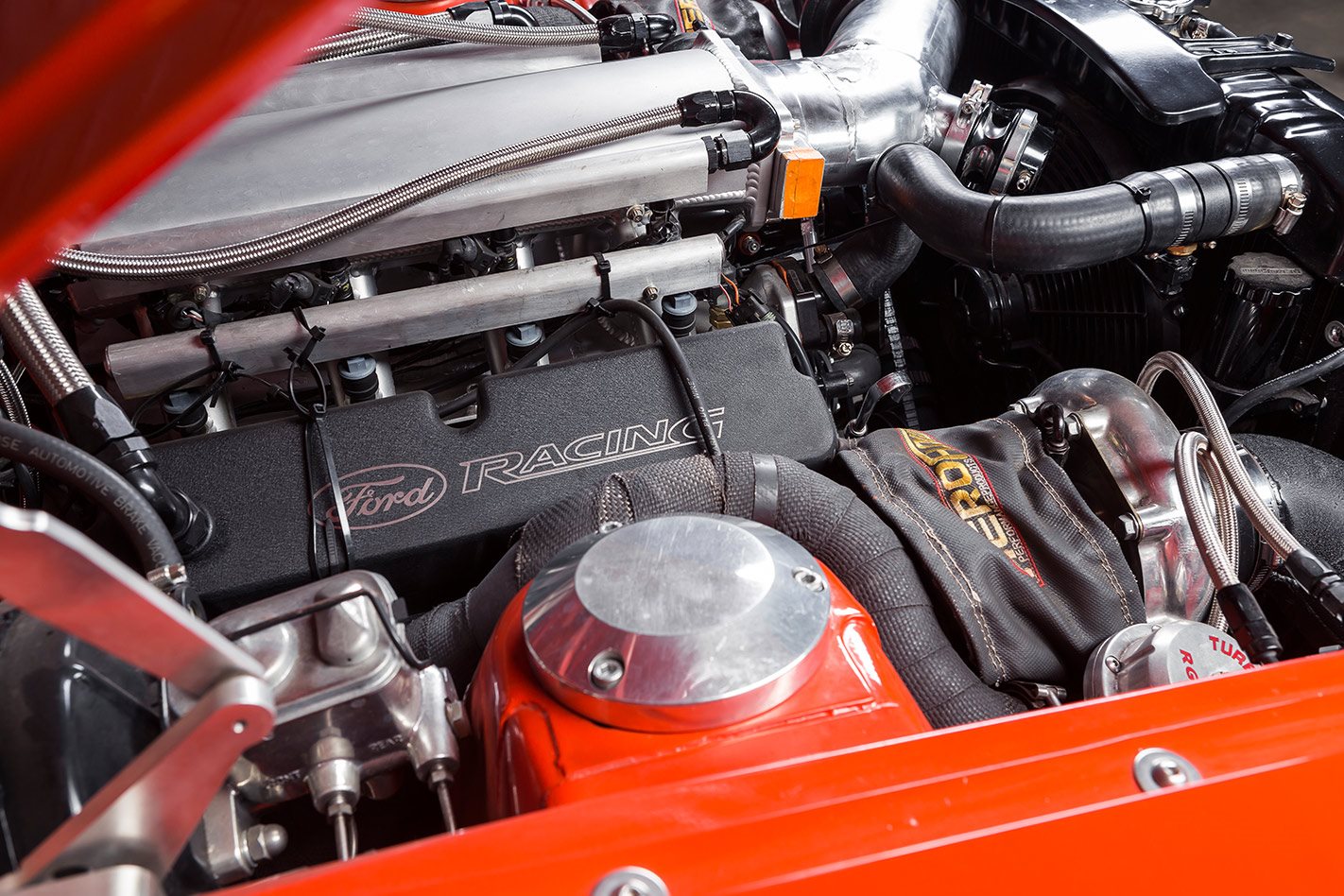 “What a mistake,” John says. “Almost nothing came back. It was all chicken wire and bog. If I’d known how bad it was, I would’ve got another shell instead of putting so much into this one.”

In the end, John pretty much replaced the entire lower six inches of the ute.

“At least I know it’s right now,” he says. “I also added a bit more chassis strength while it was on the rotisserie.” 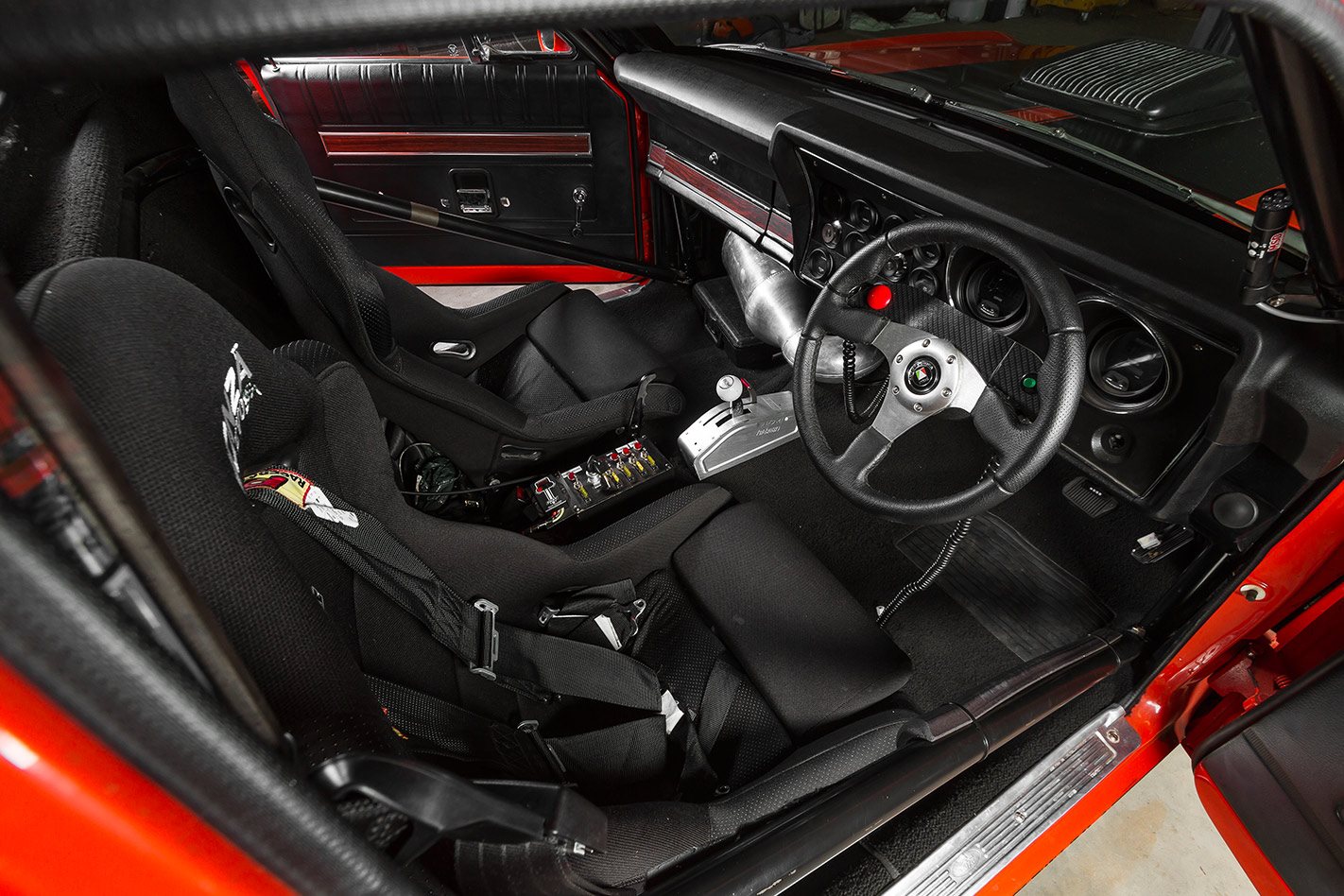 After spending every weekend and every night for 12 months cutting out rust, it was over to Stu and the crew at SB Smash for panel ’n’ paint. In just three short weeks they massaged John’s repairs, knocked the panels into shape and laid on the Vermillion Fire duco. 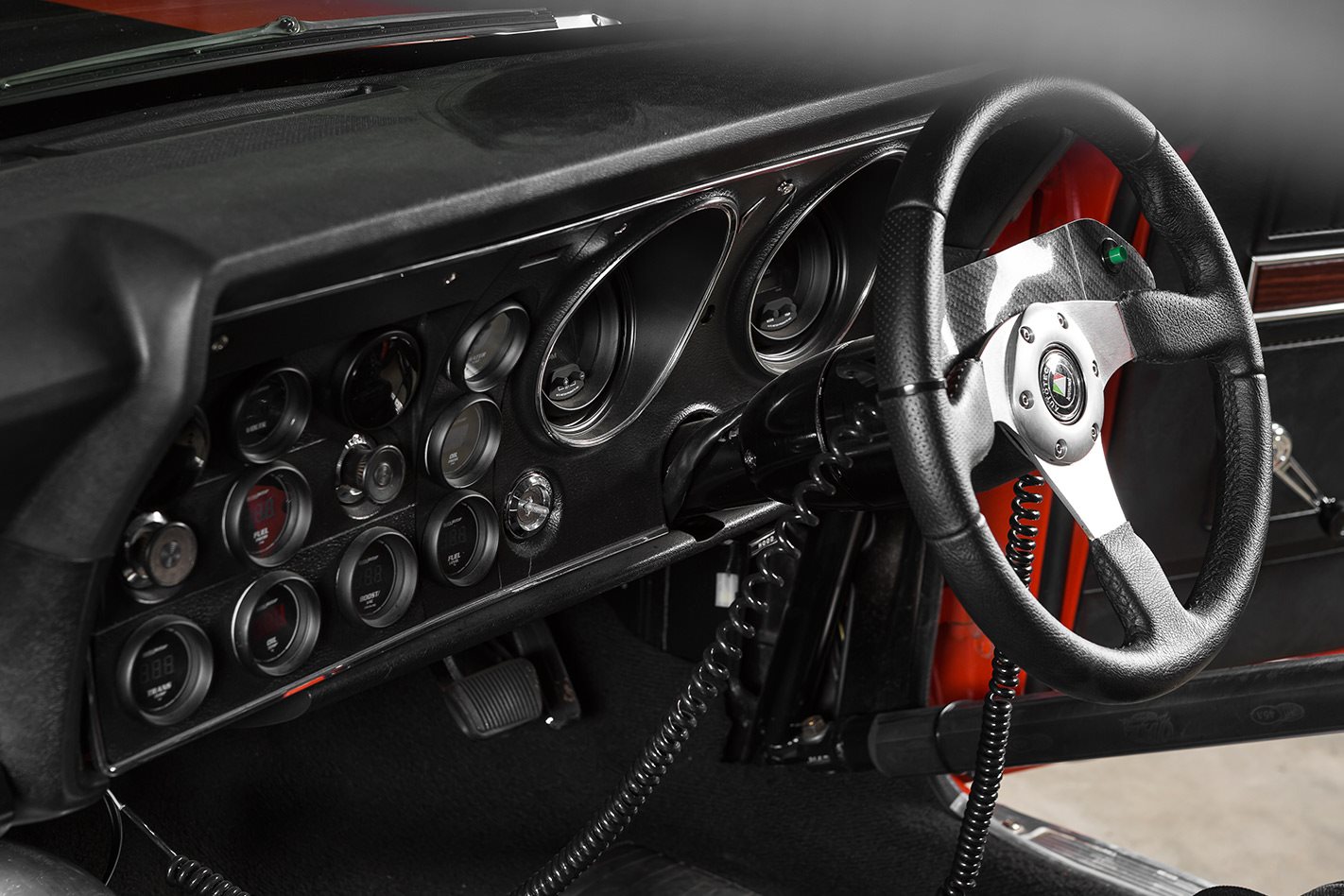 The repro Rare Spares dash has been filled with Auto Meter digital gauges. “For racing I find the digital gauges better, as it’s just the number,” John says. “I’ve laid them out so they’re easy to read, and my son-in-law Justin wired it all”

“More stuff went wrong than you can possibly imagine,” John says. “There were oil leaks, it threw belts, popped a head gasket, bent then broke a conrod – so all new rods and pistons, plus cleaning up a bore. Now that’s sorted, it’s running good and proving to be rock-solid reliable.”

Along the way the stock leaf springs were ditched in favour of a full CalTracs system that includes traction bars, adjustable mono-leaf springs and adjustable shocks. Picking up a full three-tenths with the CalTracs set-up put a pretty big smile on John’s face. The ute’s best run so far is a 9.14@147mph. 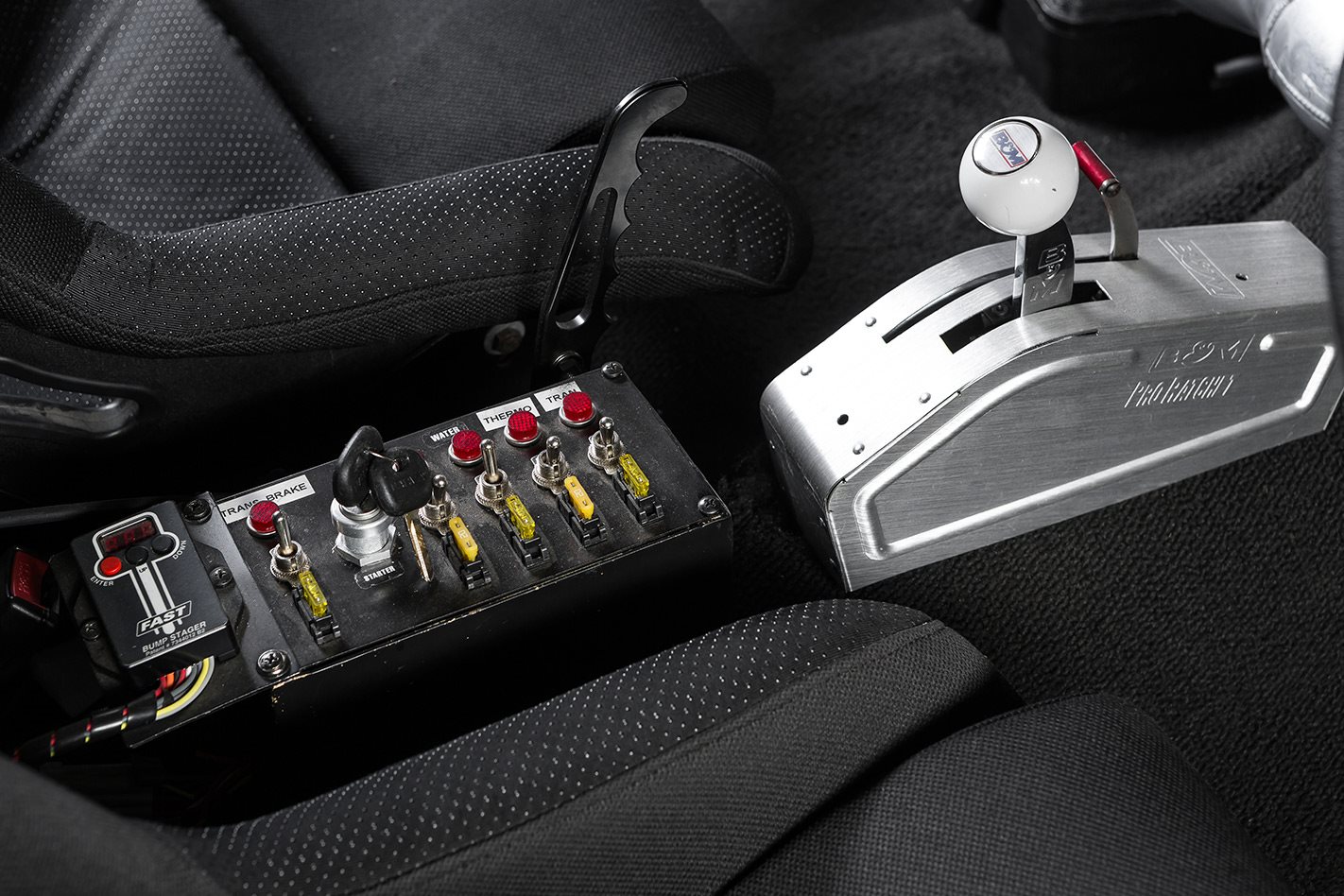 During the build, John’s life changed, including buying a new business, so his US Drag Week aspirations had to go on hold. On the bright side, Street Machine’s Drag Challenge is alive and well, with John already signing to be on the startline at Adelaide International Raceway this November. 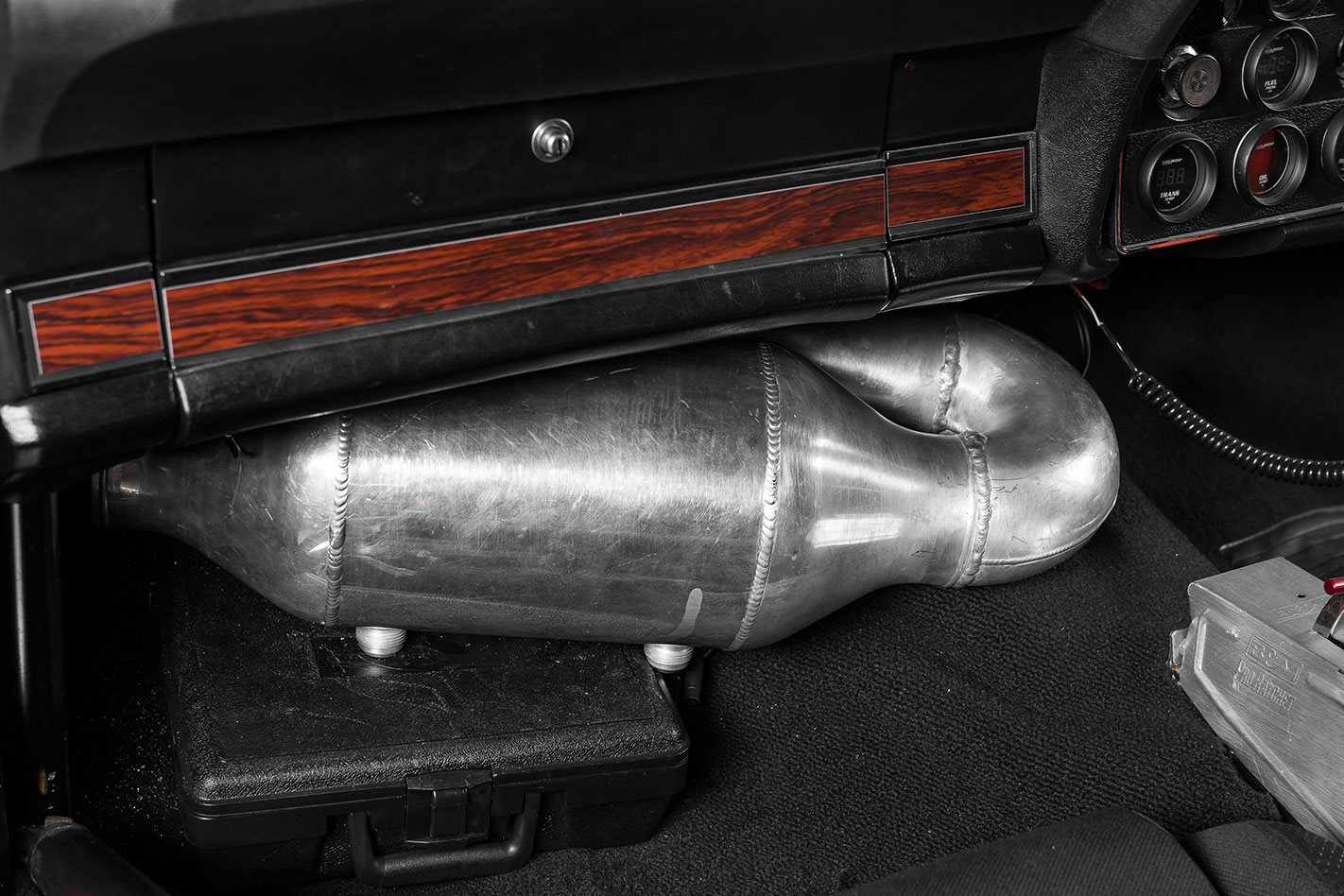 When these photos were taken the intercooler plumbing was missing. The original configuration relied on a front-mount air-to-air intercooler. “On Baker’s dyno, the boost peaked at 13.9psi,” John says. “Although that was good for 1150hp, the intercooling and plumbing was only rated at 1000hp – it’d reached its maximum flow capacity and was limiting boost. So I’m in the middle of swapping to a water-to-air barrel ’cooler (pictured) rated at 1400hp, which should see the ute drop into the eights once we turn the engine up.”

That doesn’t mean he’s not still looking for eights in the long run, though. “It launches hard, 60-footing at 1.35,” John says of the ute. “When Frank Marchese was running high sevens [in the Dandy Engines XW] he was 60-footing at 1.30. So I’m in the hunt. With the new barrel intercooler sorted, the boost dialled up, and E85 or race fuel in the tank, it should run something like an 8.8.”

For Drag Challenge though, the number one key to staying reliable is keeping heat out of the engine bay. With this in mind, John is happy to sacrifice ET and keep it on 98 so he can have fun and get to every track. But if all goes well this year, John’s talking about having another crack in 2018 with the wick turned up. That’ll definitely be something worth watching.