IT WAS great to see the racing wheels turning again at the recent Kenda Expression Session radial meeting at Willowbank. With the Sydney and Melbourne tracks out of action due to upgrades, there was a big show of southern cars at the event, which was effectively a multi-day test session run over the eighth-mile.

For the Bennett Motorsports/SB Smash Repairs team from Orange, NSW, it was uncharted waters, being their first event on radial tyres. The team’s 2010 Jerry Haas-built Pontiac GXP (previously owned by former Aussie Pro Stock racer Darren Parker) had been in blistering form with a twin-turbo LS engine machined by Westend Performance, built by Stuart Bennett of SB Smash Repairs and tuned by Castle Hill Performance. 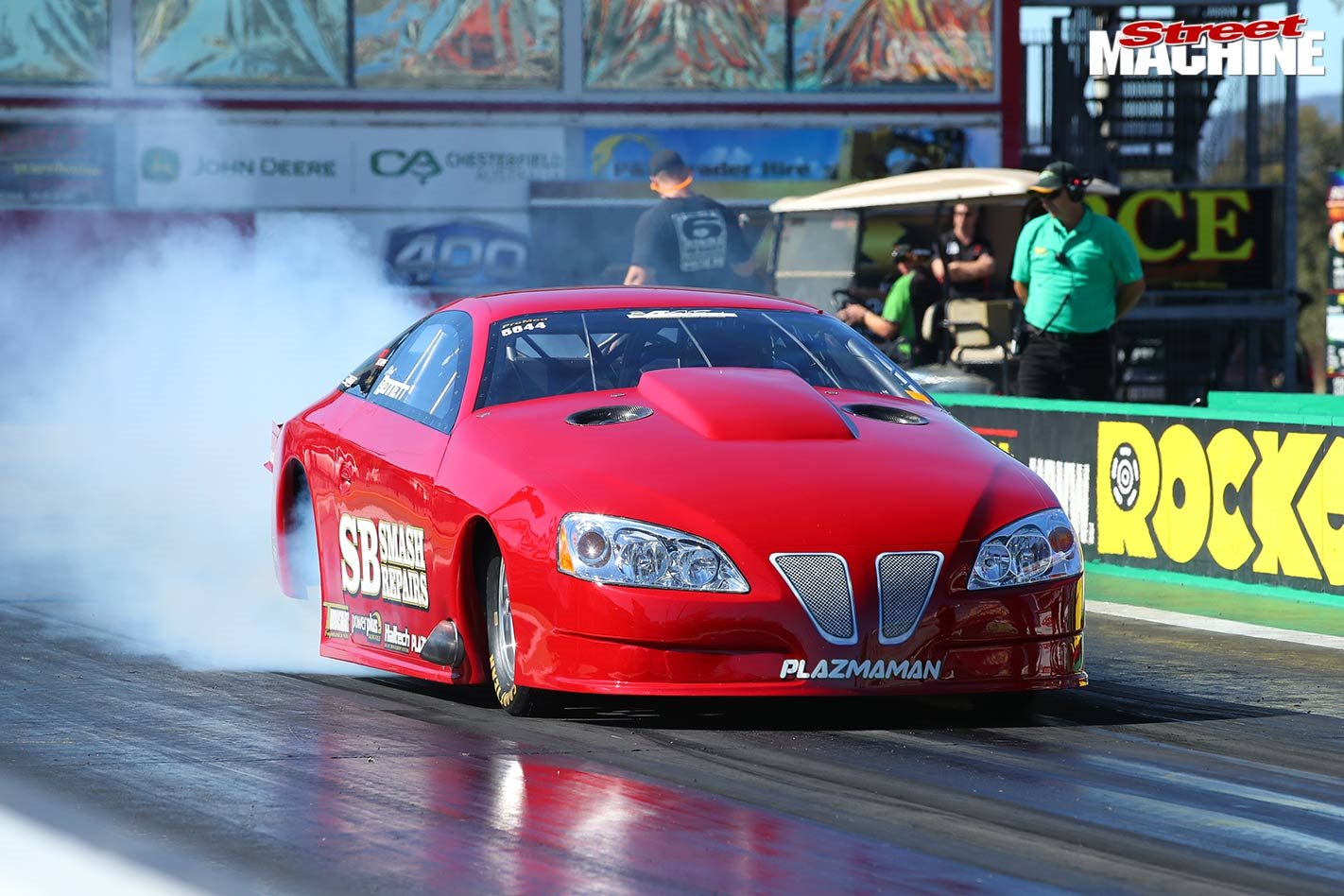 The Bennett family has been campaigning the car successfully on a 34.5x17in slick, running an impressive 6.2@232mph over the quarter-mile at Sydney.

“I’d never driven a radial car before,” says Stuart. “The car has a Pro Stock chassis, which is not the type of car that people use for radial racing as a rule, so I was a bit nervous going into the meeting. When it came to setting up the car, I really wasn’t sure what to do, so Craig Burns at Street Car Fabrications really helped me out.

“Racing the car on radials was a lot different to slicks, where the car usually squats hard and I can’t see where I’m going for the first 60 feet. We changed the shocks to the setting Craig provided, so when the car launches the rear separates and rises. It was a totally different feel.” 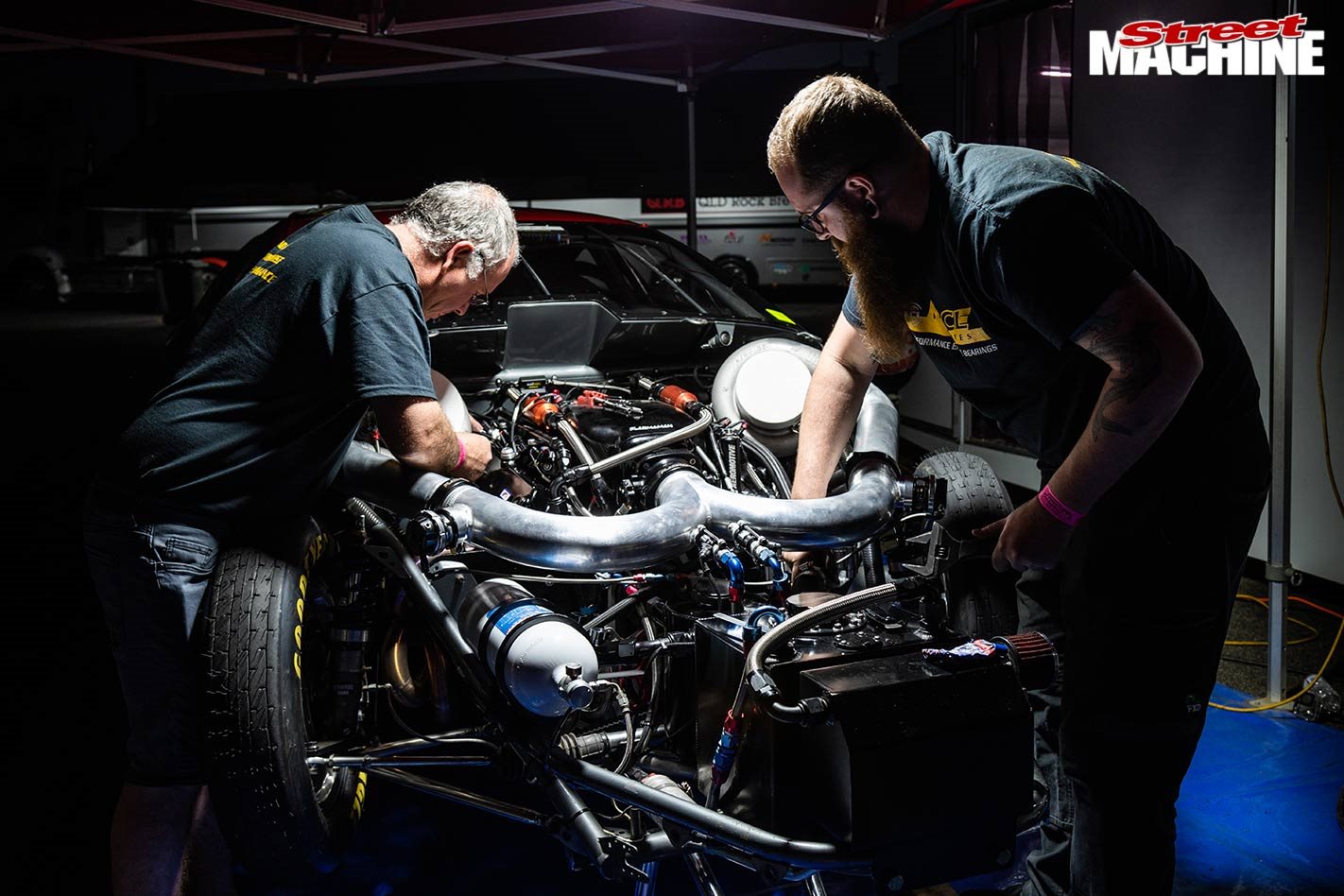 Prior to Kenda, the car had run a best of 4.09@186mph on slicks over the eighth in Sydney, making it the quickest small-block car in Australia and the third-quickest in the world. Heading into the Expression Session, tuner Dale Heiler was confident the car had a high three or a bottom four-second radial pass in it.

“Our first hit was clean; the car went straight as an arrow, and the 60-foot and 330 incrementals showed it had a three-second ET in it,” Stuart says. “We had been running the car on about 40psi of boost and Dale threw more at it. When I asked him how much, he said I didn’t need to know, but you need to aim for the sky. If you are content to go to a race meet and run second, there is no point in going.

“The car behaved really well. It ran straight and didn’t move around at all like it does on the big tyres. We managed a best of 4.071@189mph over the eighth, which reset our own record for the quickest and fastest small-block car in Australia.” 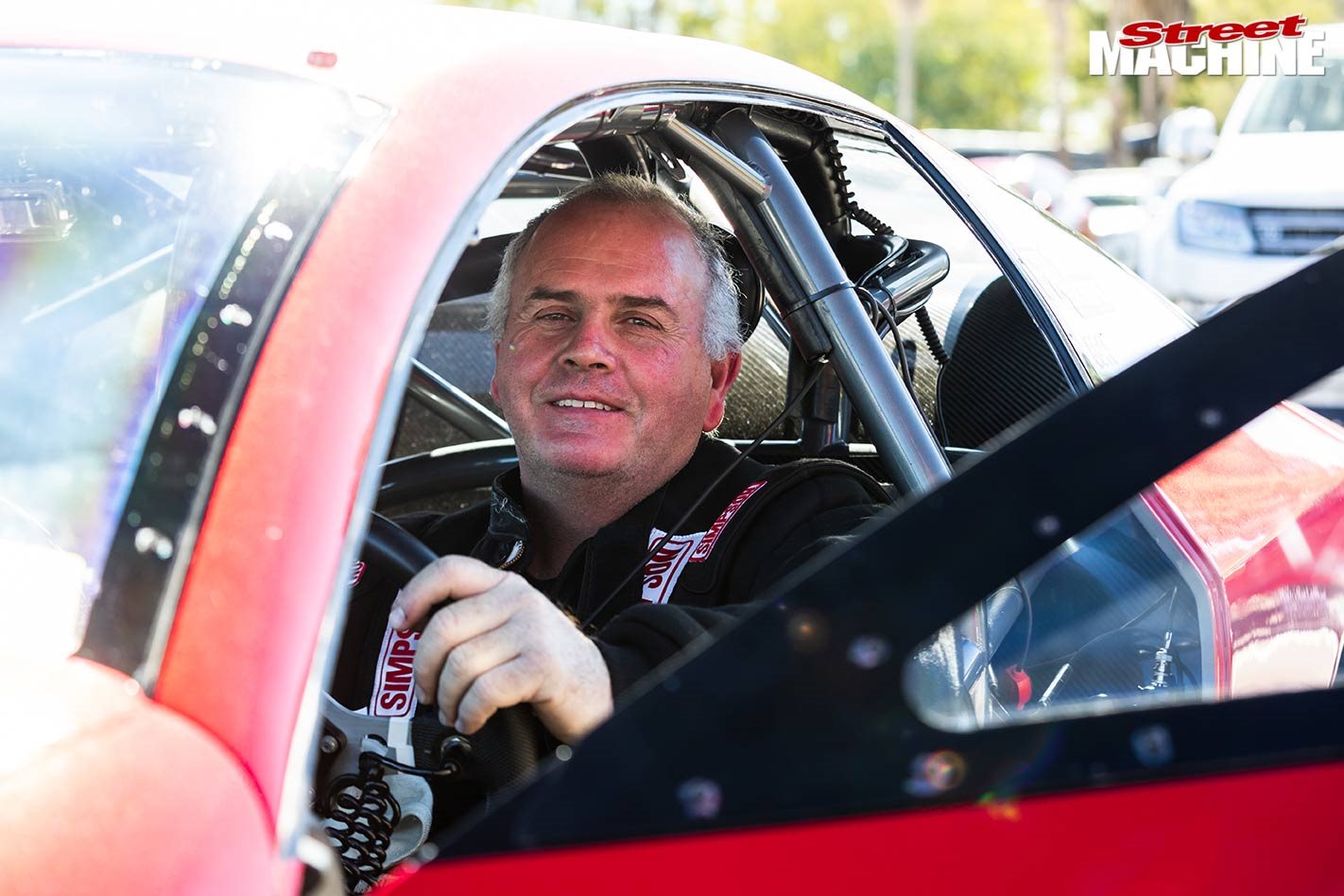 Stu’s previous drag car was a Holden Camira, which ran a similar engine set-up to the Pontiac but with smaller turbos and a Powerglide. It ran a best of 7.00@198.55mph! Stu has also raced motorbikes in Supercross, Motocross, Enduro and Supermoto, winning championships in each discipline

Judging by the 2500lb race weight (with driver) and the mph, this bad boy is making in the vicinity of 2800hp!

The engine is a wet dream for boosted LS fans, consisting of a Dart block, Bryant crank, Carrillo rods and JE pistons. It weighs in at 427 cubes and wears a set of All Pro heads and beryllium fire rings in the block, with six half-inch head studs to seal compression.

A multi-stage dry sump helps sustain the mill at 9000rpm, and the forced induction comes from a pair of 88mm Garrett turbochargers with 60mm Turbosmart wastegates.

Fuel supply is courtesy of an Enderle 1200 pump, feeding a set of massive 550lb Plazmaman injectors. A Haltech 2500 ECU with all the bells and whistles manages the engine vitals and provides data acquisition for every function desirable. For ignition, the fuel/air mix is fired by the latest Haltech smart coils.

“It’s been a very reliable combination for us,” says Stuart. “We do rods and pistons every 50 hits, and bearings we monitor regularly but change at 25 whether it needs it or not.” 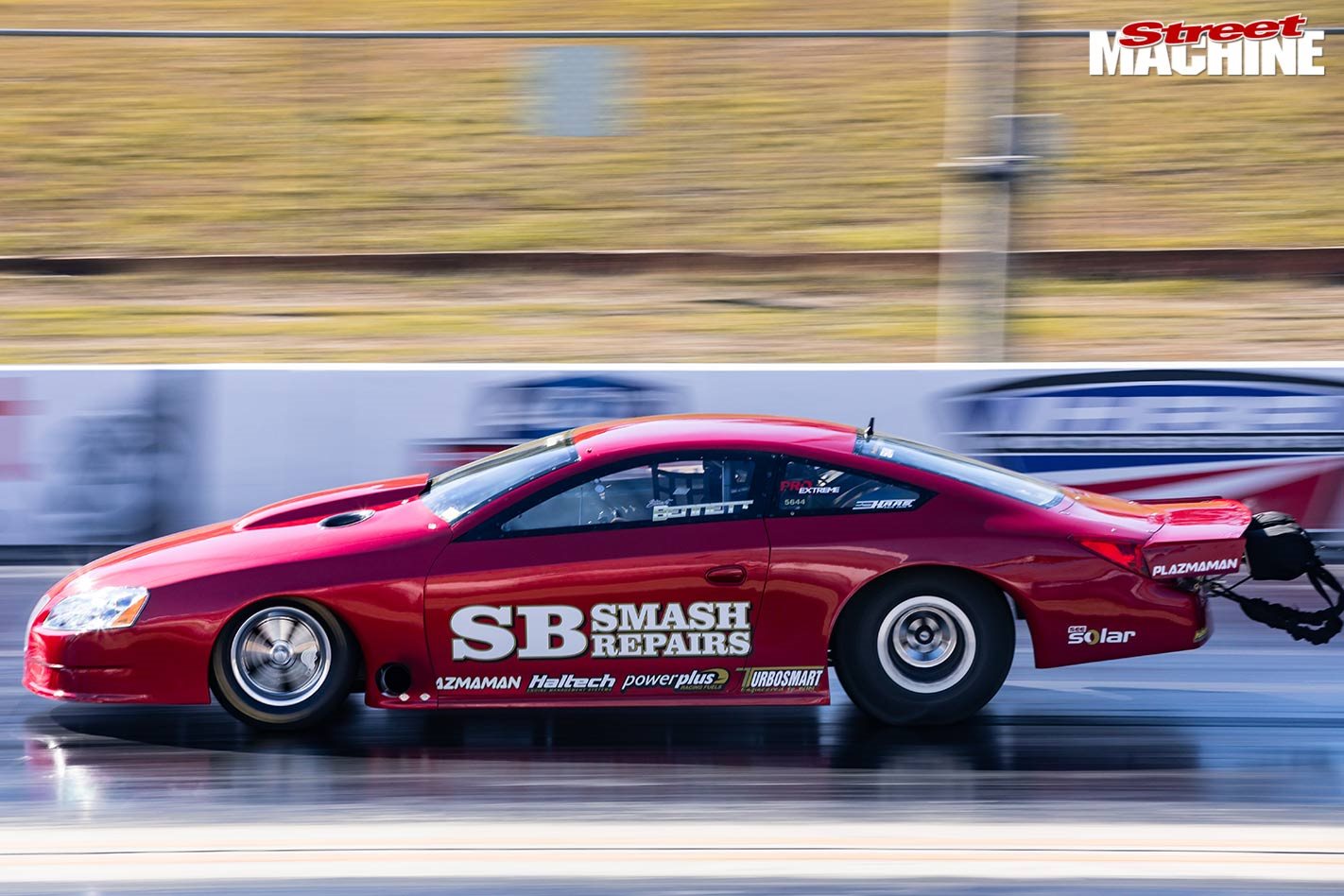 Backing the monster LS is a three-speed TH400 built by Al’s Race Glides and matched to a billet bolt-together Pro Torque EV1 converter.

“We are really happy with the outcome [at Expression Session] and look forward to Kenda in September, Grudge Kings in Sydney in October, and then back to Kenda in Queensland in November,” Stuart says.

“The plan with the GXP is to run both radials and slicks, giving me a larger range of racing to compete in. I loved the radials; hopefully some other guys will be inspired to come over and try it.”

The team’s biggest goal is to rid the car of the tyre shake it had last meeting at Sydney on the big tyres, in order to improve on their 6.20 quarter-mile and take out the world LS record with a 5.96 pass. We can’t wait to see it happen!