WHEN it comes to bucket-list events, Hot Rod magazine’s Drag Week is at the top of everyone’s list – ours included. Over the years plenty of Aussies have given the five-day automotive torture test a go, with varying results. There are four teams from the land Down Under giving Drag Week a crack this year – let’s take a look at who’s who.

JOHN Faraone’s silver VH Charger is a repeat offender; this will be his fifth consecutive go at Drag Week. The twin-turbo 572ci big-block Mopar-powered Charger has become synonymous with Aussies at Drag Week, and it always turns heads. 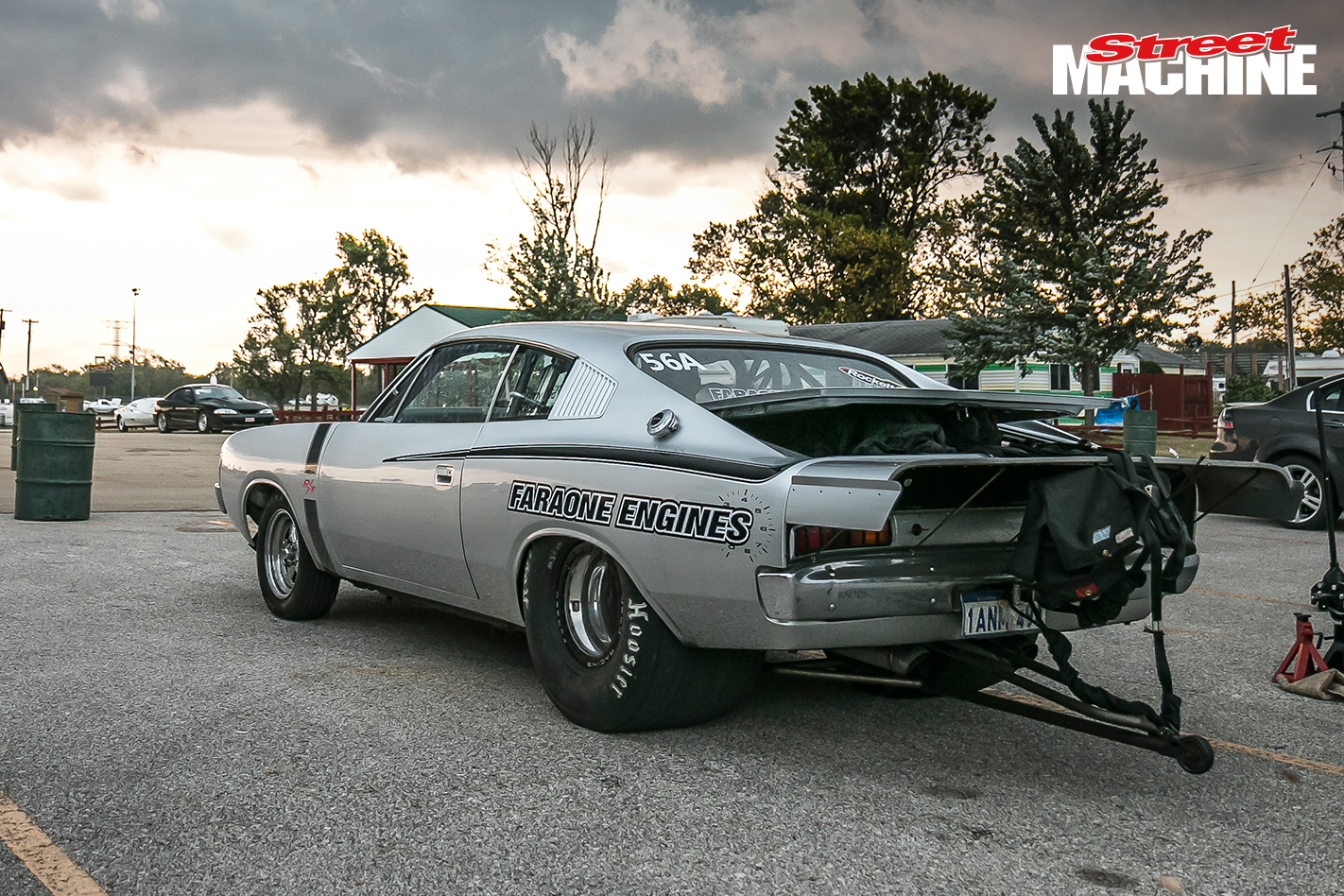 John won the Quickest Mopar trophy back in 2013, but the past two years have been fraught with problems, torching a head in 2014 and breaking a throttlebody shaft in 2015. But that’s Drag Week – if it was easy, everyone would do it.

Over the years the car has been getting gradually quicker, going from mid-eights to sub-7.50s; that’s pretty impressive when you consider the car hasn’t made a pass here in Australia for the past four years or more. All the car’s recent testing and development, other than dyno tuning, has been done in the US, which makes it a very expensive exercise. 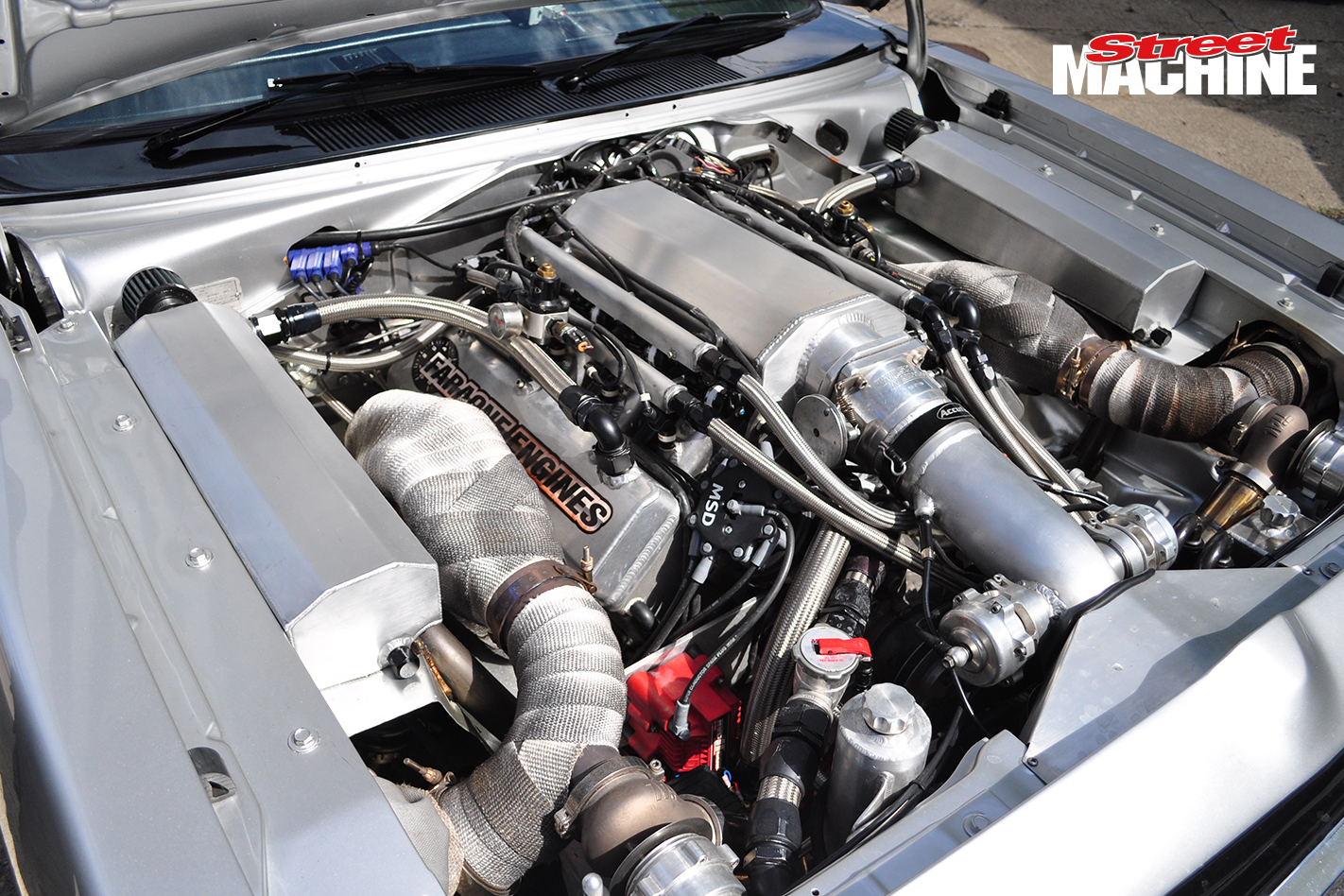 “I’m hoping to fly the flag harder this year,” John says. “The car should go straight with the new four-link upgrades and new wheelie bars I had made by Skinny Kid Race Cars. I should be able to use the power now without trying to turn it on the roof.”

The paint was heavily damaged during transit back to Australia last year, so John had to repaint the entire car before he stuck it back in a container for Drag Week 2016.

On the plus side, the Charger ran 7.49@189mph at Indy and then 7.43@192mph at Cordova last year, and shows every indication of doing even better again this year. Watch out for some awesome passes from this car next week.

HUSBAND-and-wife team Brian and Dianne are part of the Drag Week family. They attended as spectators for a couple years and got to know all the regulars before saving all their pennies and shipping their nine-second big-block Torana hatch over to the US last year. 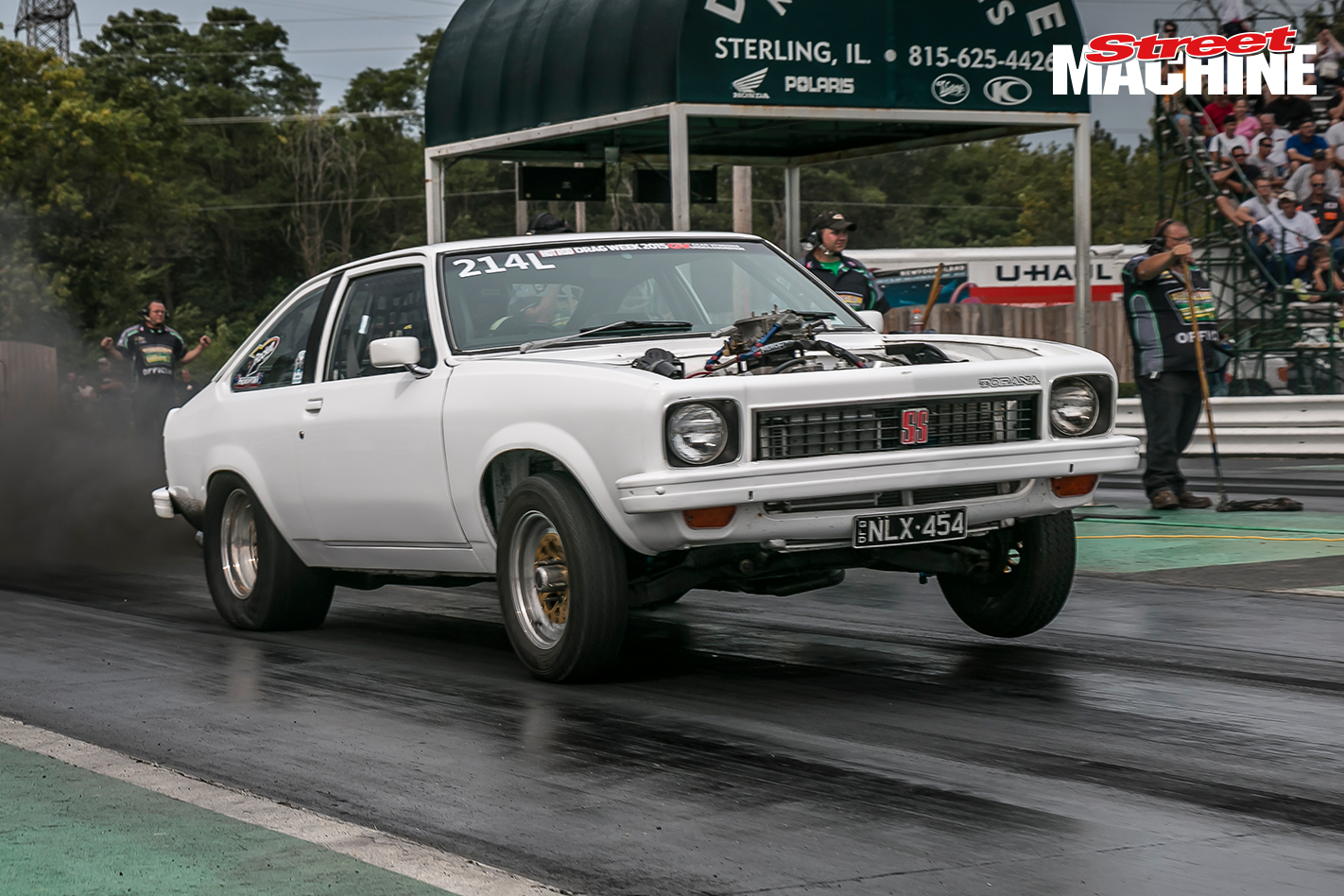 Despite the car consuming a totally insane amount of fuel, and dealing with people constantly calling the Torana a Chevy Vega, the couple had a blast and the hatch finished third overall in the Street Race Big-Block Naturally Aspirated class.

Deciding that they’d like to have another go, Brian and Dianne left the Torana in the US this year. They flew back over to the States in late August and set about preparing the car for another tilt. 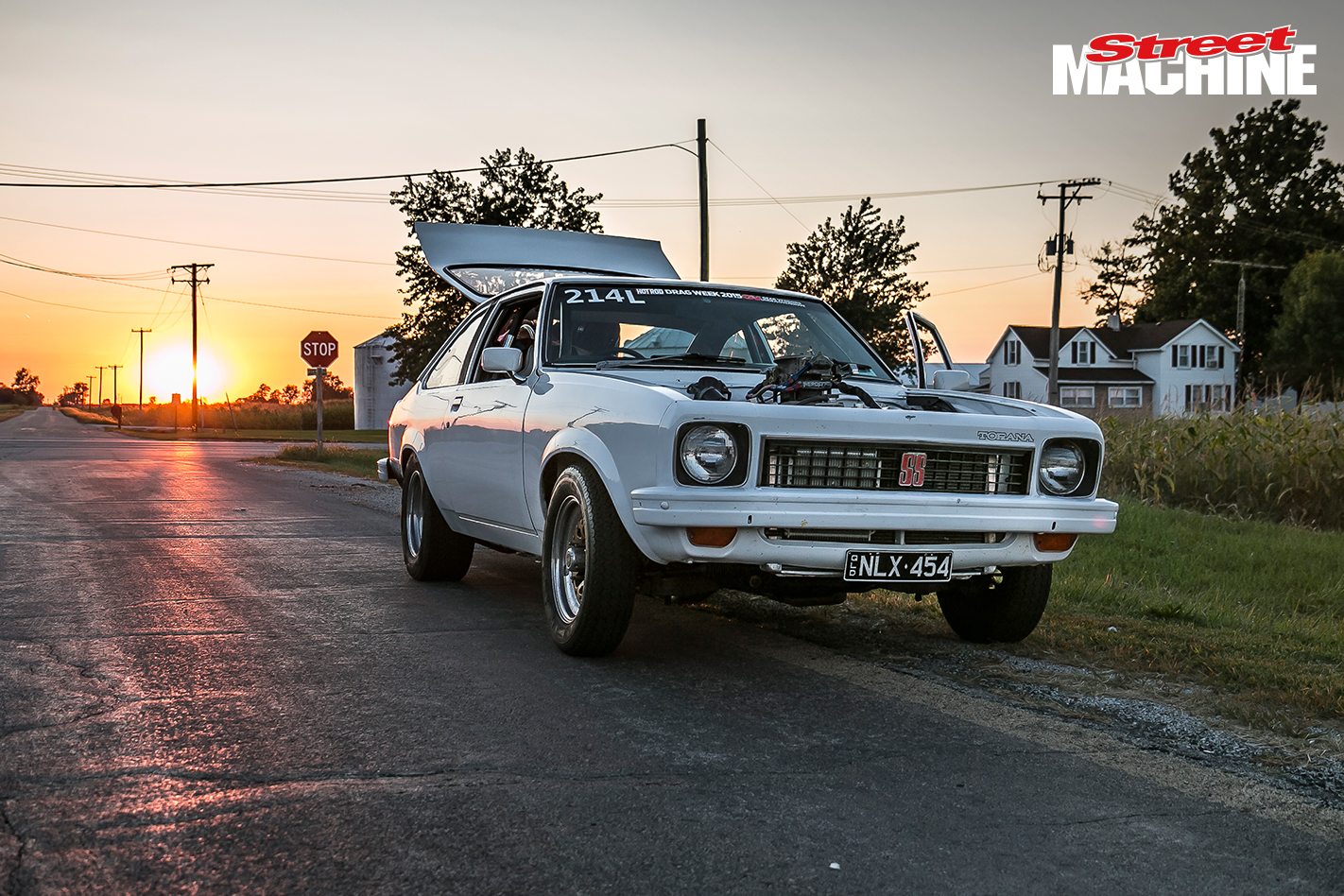 Last year the car ran a best of 9.56@143mph with the old Dominator carb acting more like a bucket with a hole in it than any kind of fuel-metering device. This year Brian has decided to go for some Holley EFI and eight individual coils, and was hoping to freshen-up the motor, but they ran out of time so he treated the big-block to a new set of roller lifters instead. They spent a bit of time chasing down a bad signal wire on the crank trigger, but now it all seems sweet and they’re ready to test the Torana at Ozark Raceway in Missouri. Hopefully they can finish on the podium again this year.

THE Trapnell Brothers certainly turned a lot of heads last year with their mechanically injected big-block HQ Monaro. The car hoisted its left-hand front wheel high most passes and ran a best of 9.78@141mph – the Americans loved it! 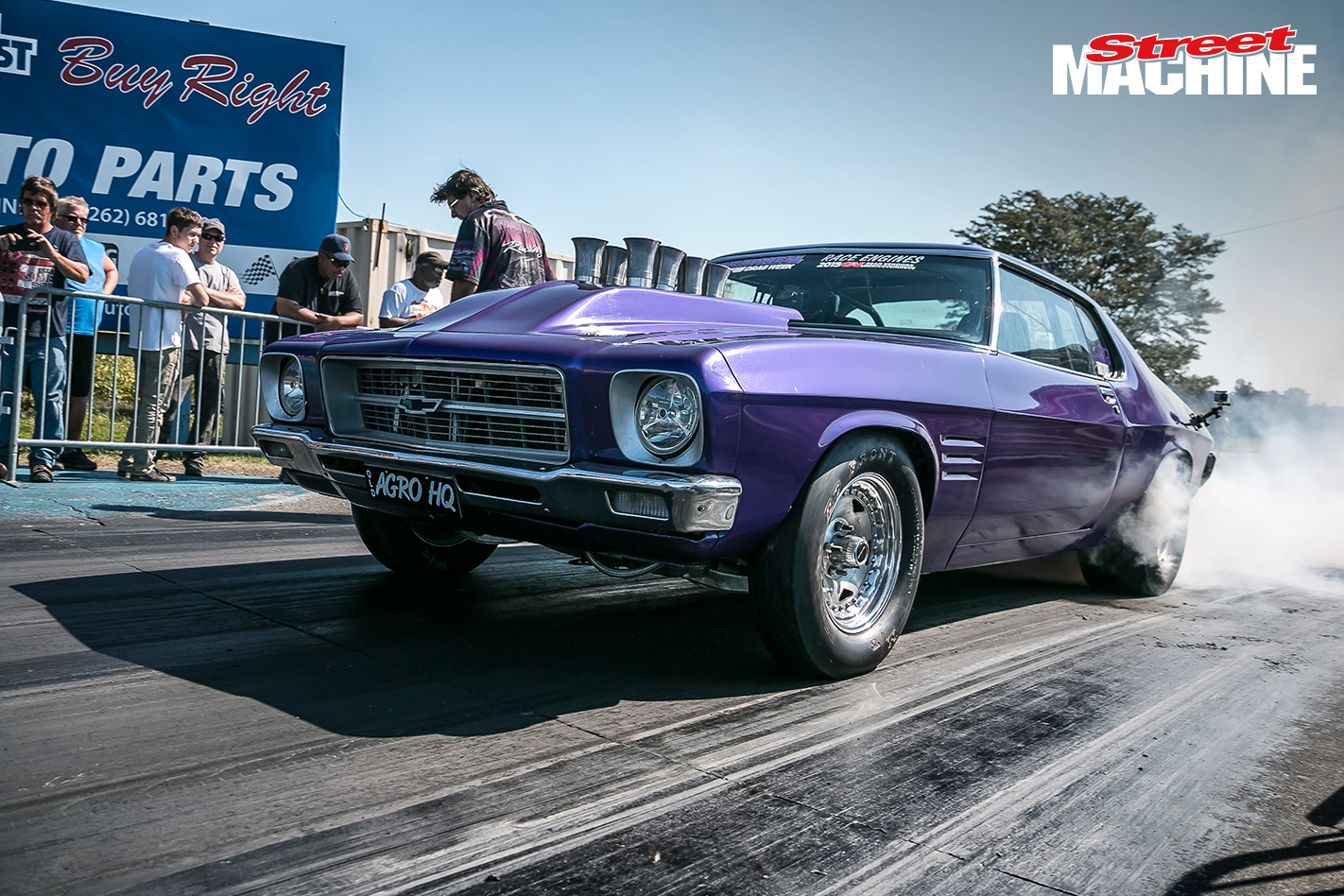 The guys tried to shove some nitrous into it as well, but the big-block wasn’t playing along and it consumed E85 and roller lifters at equally atrocious rates. After last year’s effort the boys had pretty much sworn off Drag Week, but after the event they softened their ‘never again’ stance and decided to leave the car in the US for another go this year. 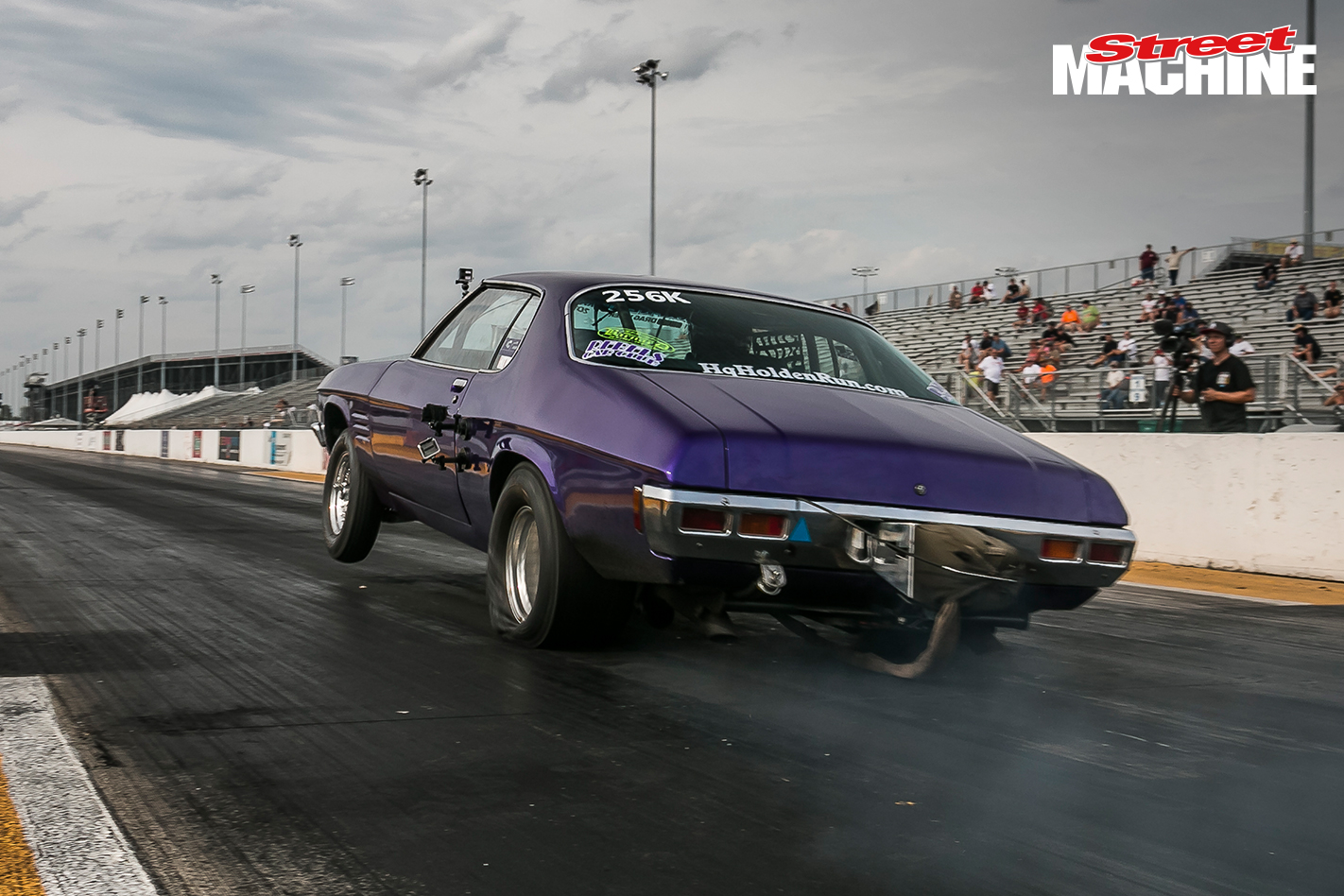 The guys flew over early to prepare the purple beast for Powercruise USA in early August. “We’re going to show the Yanks how to do it!” Geoff declared. They slotted in a new pump-fuel 598ci combo up front and converted the mechanical stack injection to electronic injection with a Holley EFI ECU. They managed to kill the trans before Powercruise and put another one together themselves, then gave it a solid thrashing at the event. 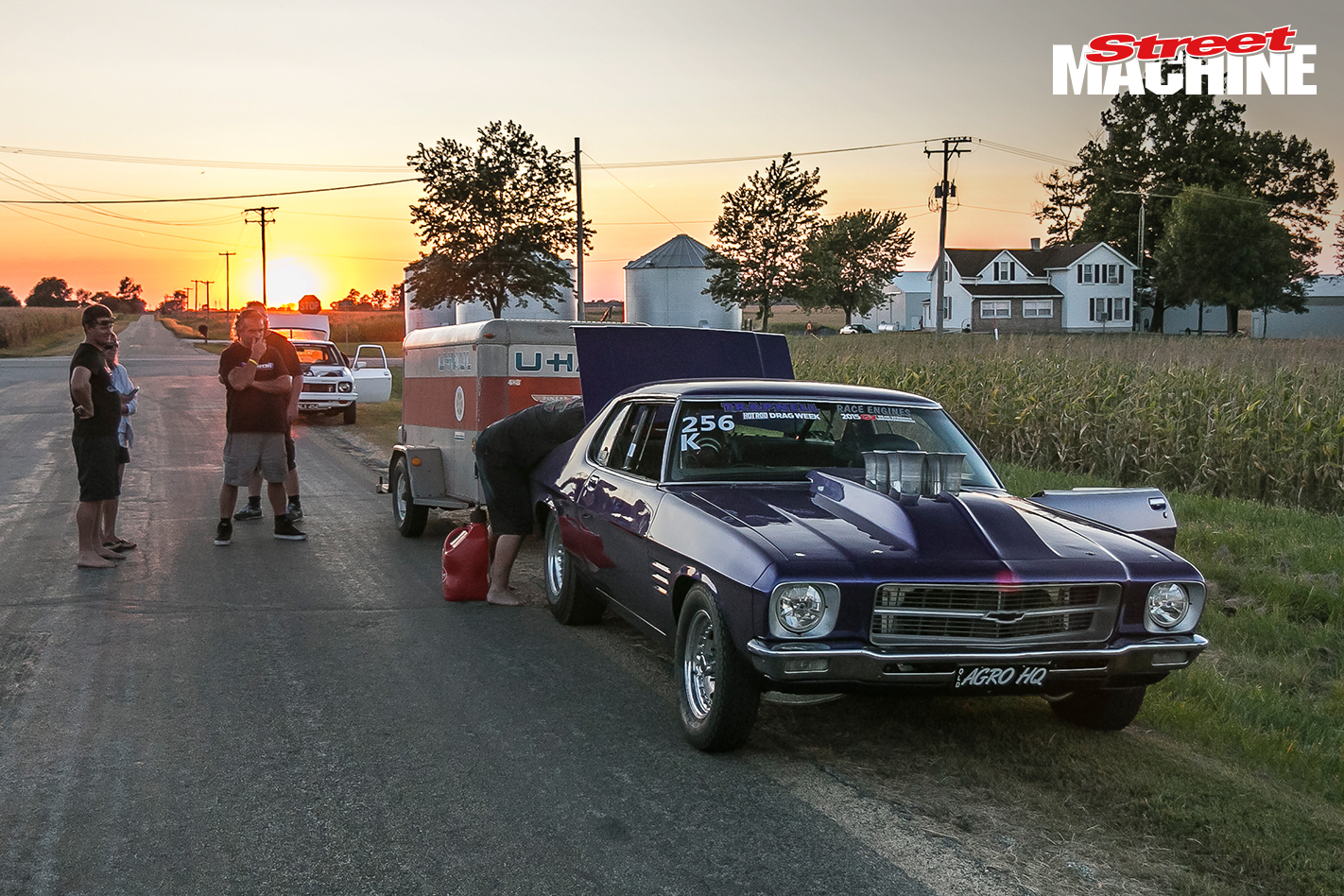 But street miles and dyno time have taken their toll, so the guys have a new transmission that they’re planning to fit tomorrow; hopefully all goes well with that.

FORGET Kim Kardashian’s bum, this is the car that set fire to the internet – the Aussie Drag Week Chevelle. Harry Haig, Pyro Jennings and Brett Ford flew over to the US last year with the intention of driving Steve Reimann’s ’63 Dodge, but they deemed that too easy and found this SS396 Chevelle sitting in a field instead. 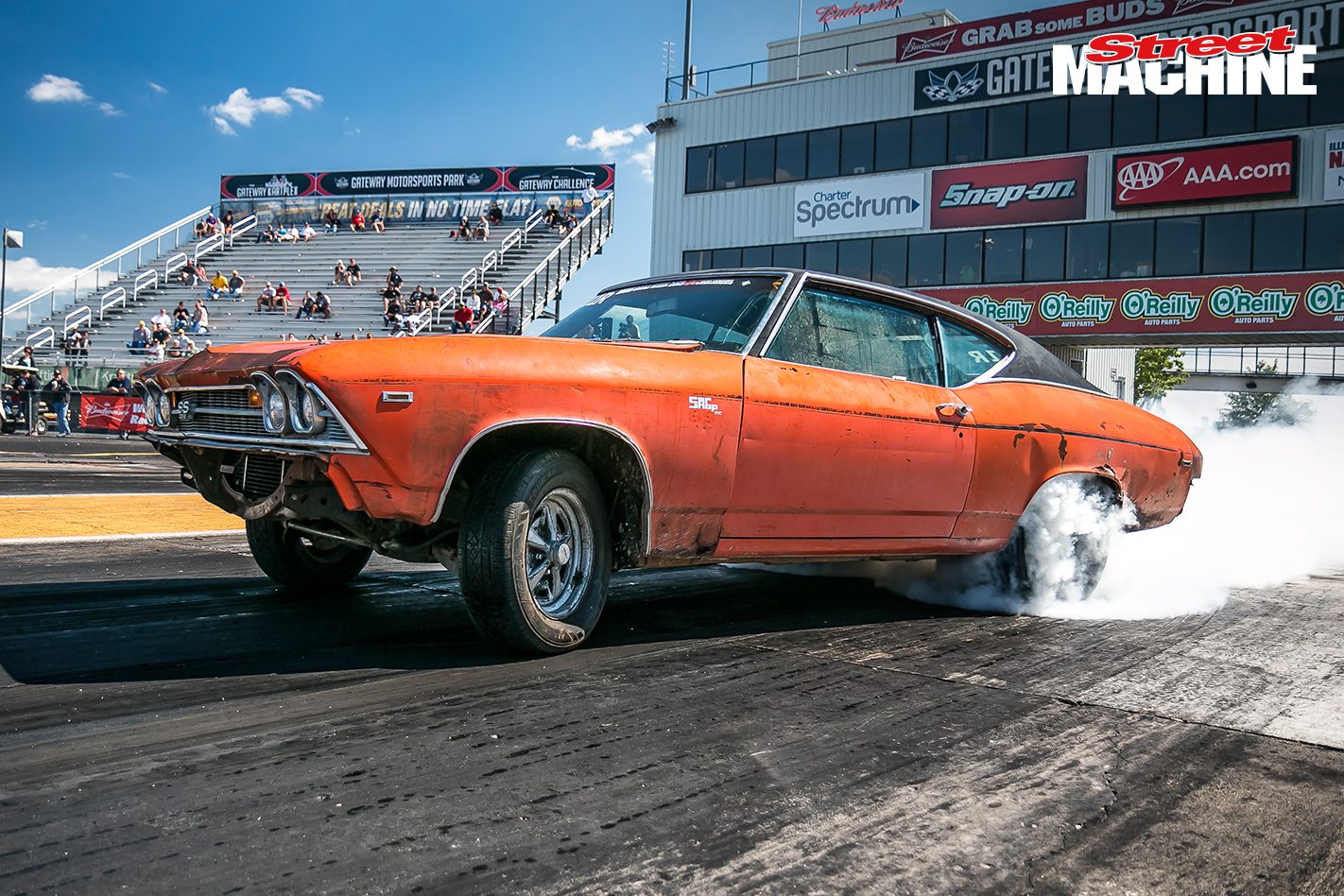 After hosing out several cubic feet of rat poop, and giving the car a quick once-over, the guys drove the rusty four-speed muscle car from Kansas to St Louis and then proceeded to melt everyone’s brains during Drag Week 2015. The car got progressively quicker at each track as the guys battled sloppy u-joints, a slipping clutch and the 10-bolt diff that kept trying to deconstruct itself. 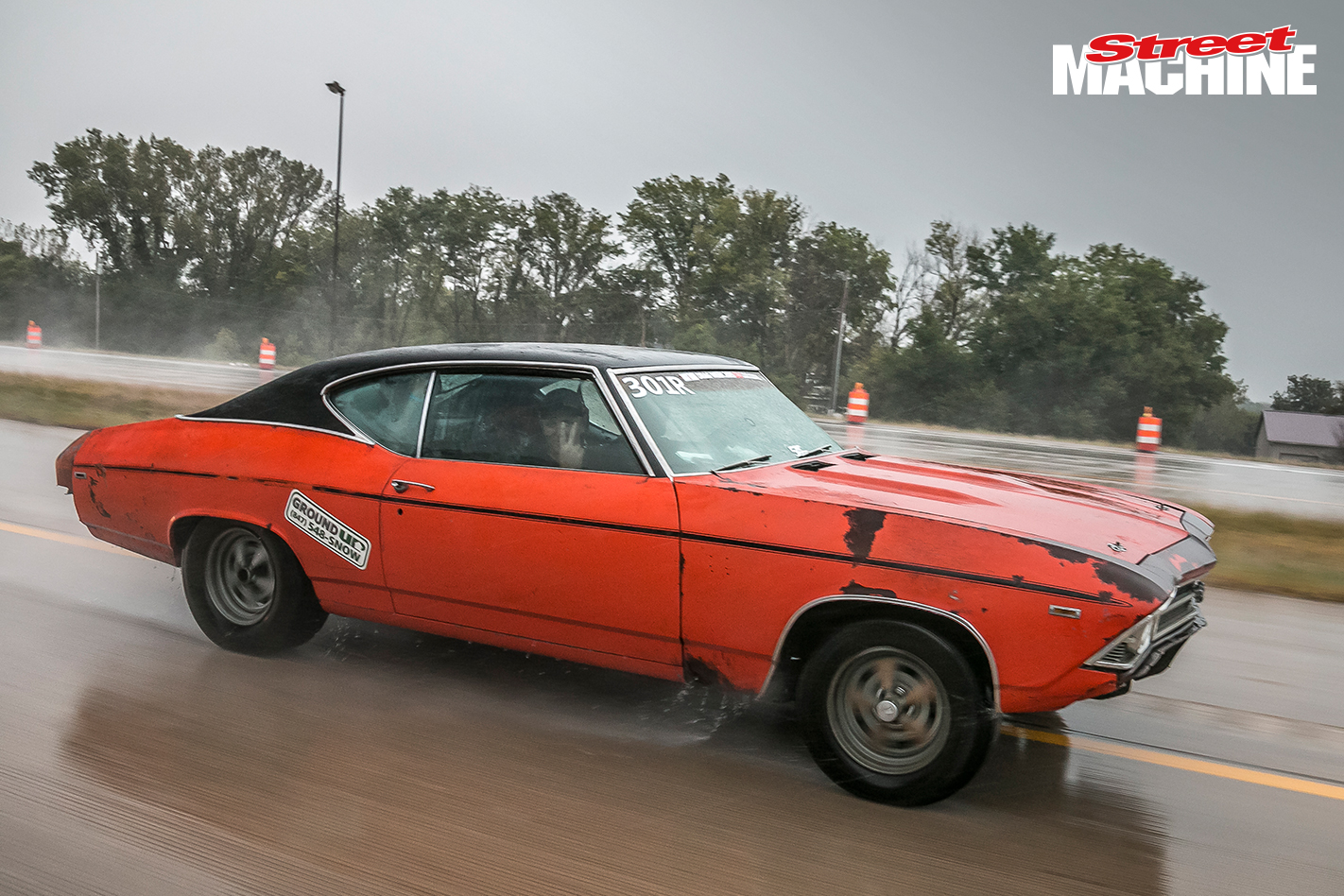 It was an epic story that could only end with an awesome victory or abject failure. The guys inadvertently chose failure when they blew past one of the officials at 90mph way off the official route and scored a DQ on day five. 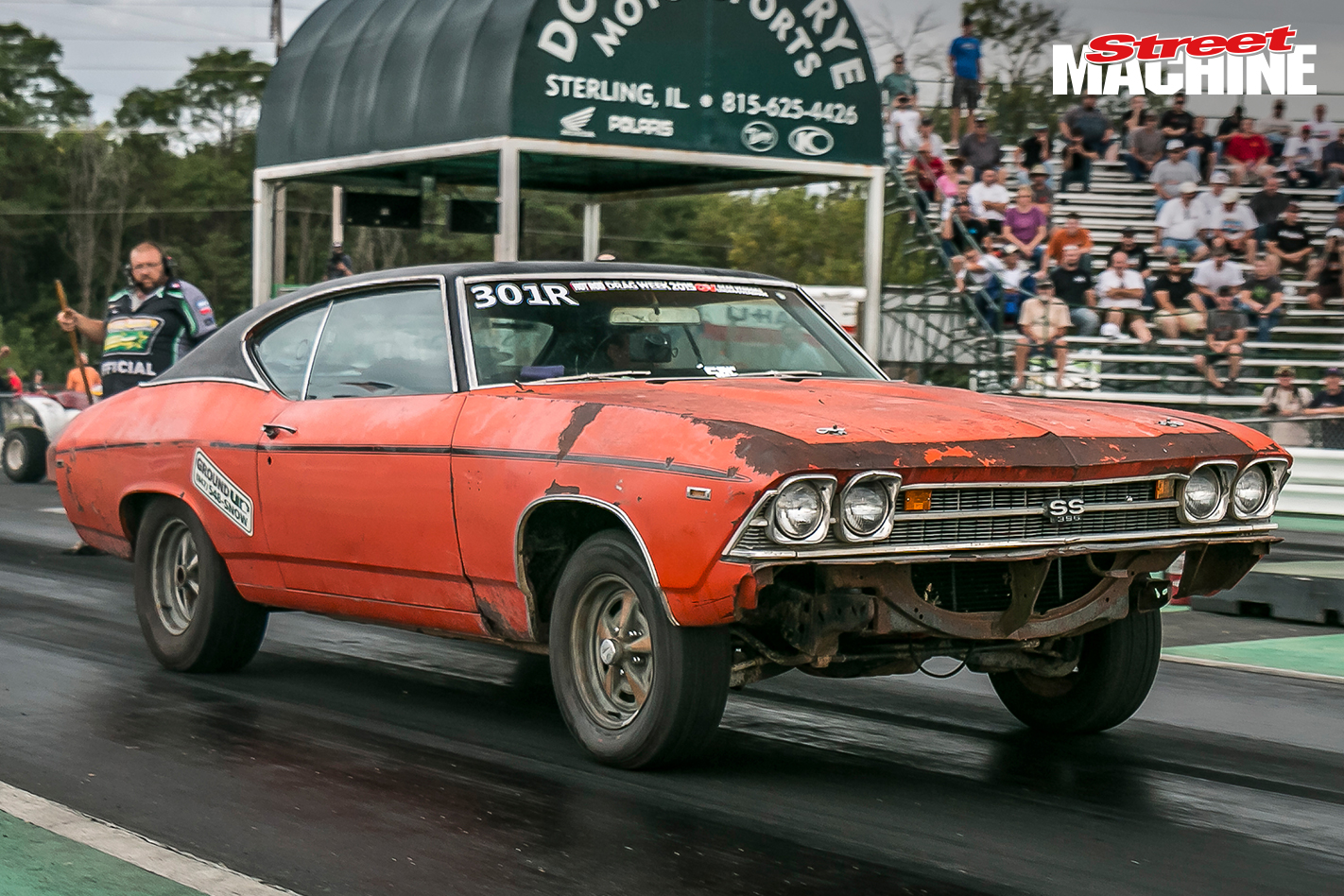 This year they plan to burn down the ’net again with the same car. Right now Harry and Shannon, along with X275 champion Terry Seng and Harry’s mate Ryan Jones, are in Kansas rebuilding the Chevelle. They’ve already stripped off the front sheet metal and removed the big-block and four-speed combo, and now they’re bolting the Edelbrock-headed 560ci big-block up front with a Powerglide trans. But the real fire-starters will be the twin 72mm turbos hanging out of the bonnet. Yep, the guys have bolted a 1300+hp twin-turbo big-block into the rusty Chevelle and they’re hoping to run mid-eights. It’s both hilarious and totally mad at the same time. The boys are certainly planning to put on a show.