THE Haltech Radial Blown class at Drag Challenge is by far the biggest of the four ‘tyre’ classes. Turbo motors make great set-ups for street driving as well as making a hell of a lot of grunt on track; our quickest cars were all boosted by either twin or single snails, and that has been the case since the very first Drag Challenge in 2014. Radial 275 tyres are a favourite among Australia’s quickest true street cars too, all of which makes the Haltech Radial Blown class incredibly popular and the competition extremely fierce. 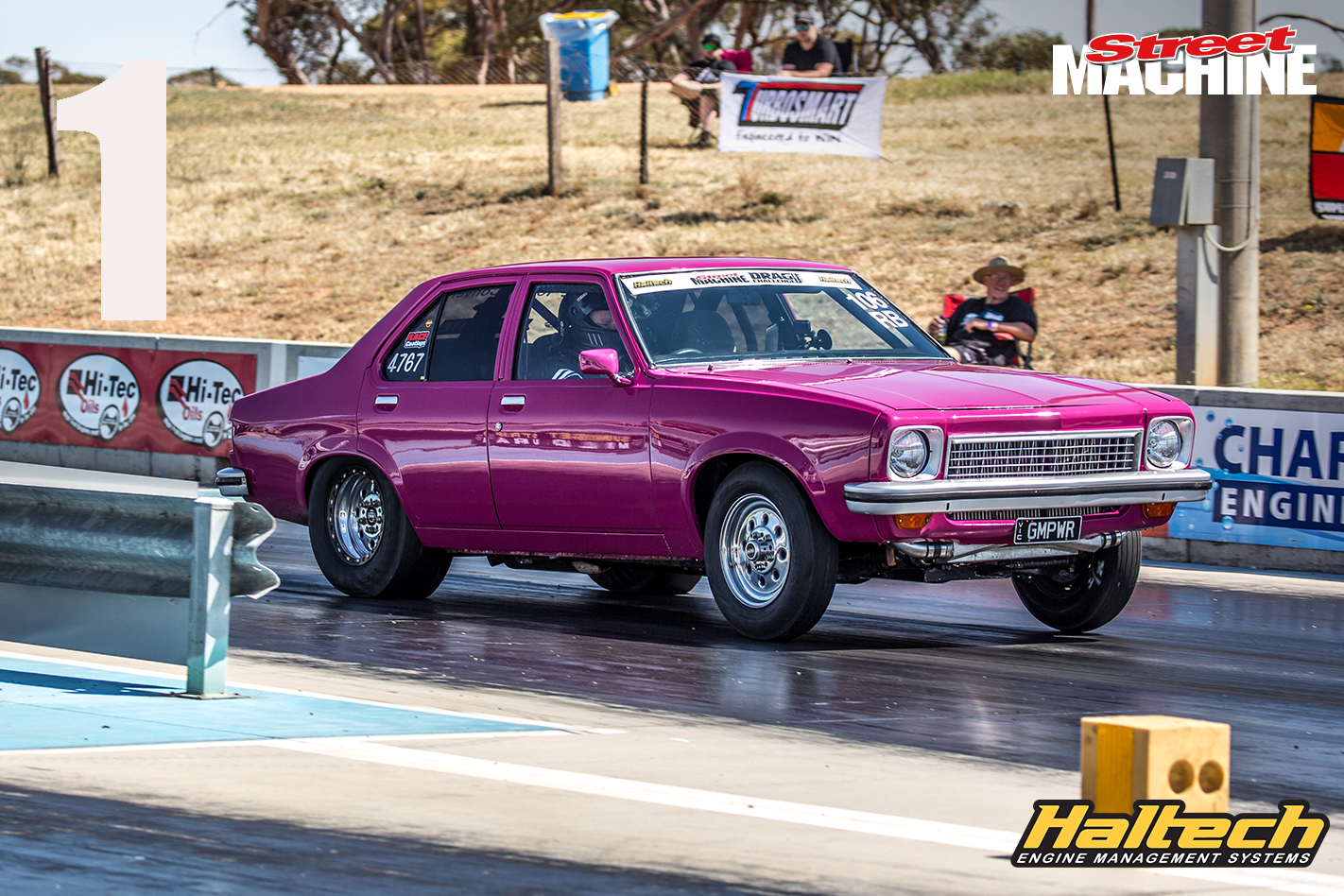 To begin with we had four tried and proven seven-second cars in contention: Quentin Feast’s Torana, Mark Drew’s Torana, Adam Rogash’s VK Commodore and Harry Haig’s HQ sedan. With the exception of Harry’s Quey, all were running twin-turbo LS-based engines, and all competitors had been through the Drag Challenge torture previously – Quentin having won the event overall twice and Adam Rogash the Haltech Radial Blown class the previous two years. Drewy had come runner-up in Radial Blown previously. Harry’s HQ had been at every previous Drag Challenge and just received a makeover, which saw it run 7.70 on its first outing at Willowbank. 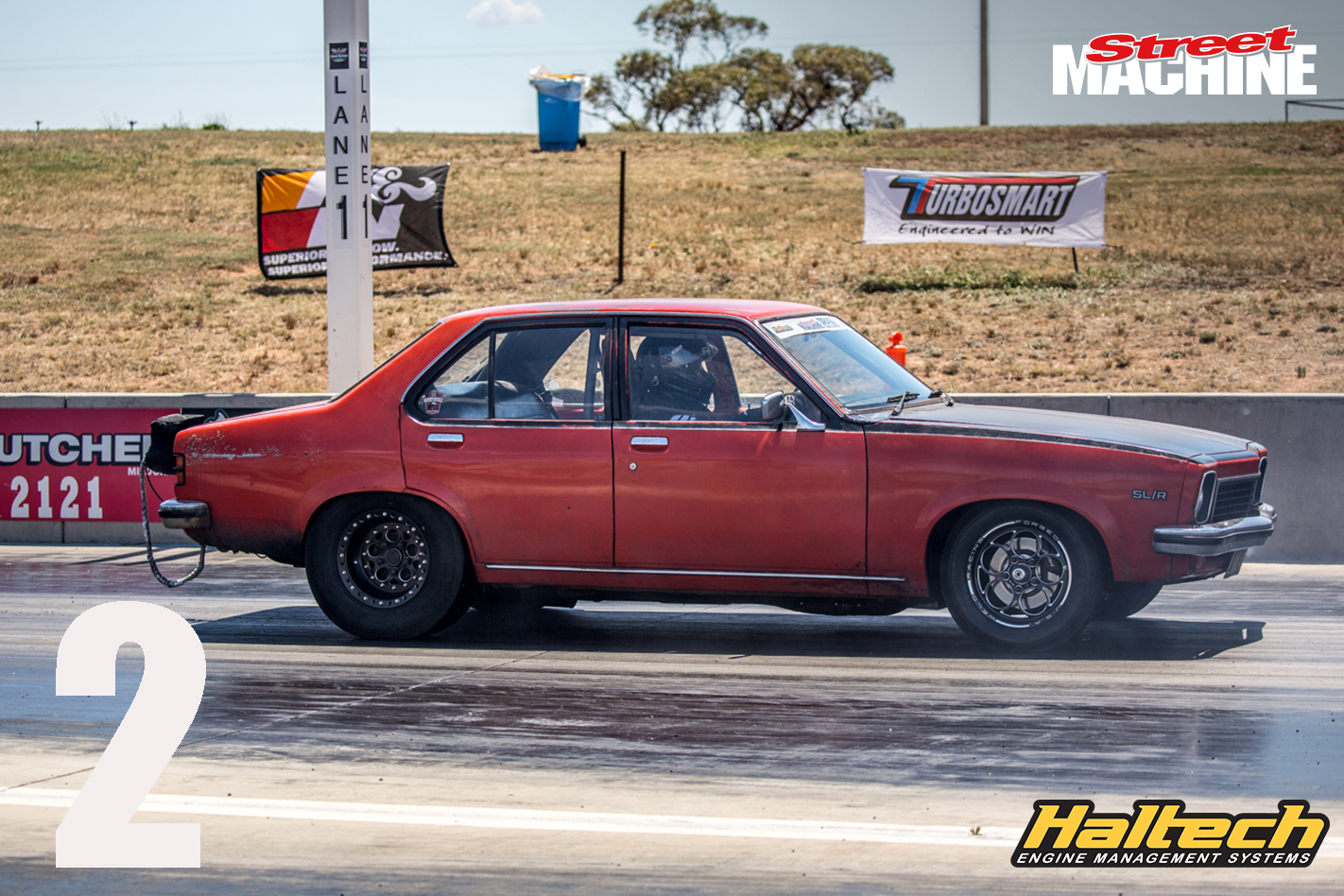 All four cars had the credentials; then there was Luke Foley with a new twin-turbo set-up on his alloy 6.0-litre VH Commodore, and the West Australian trio of Josh Lopreiato, Lorenzo Gullotto and Stephen Molson, who were all piloting serious eight-second cars.

After Day One at Adelaide International Raceway, it was Mark Drew and the Crusty Torana in first place, a couple of tenths ahead of Quentin and Adam. The scorching temperatures made the track skatey and everyone had trouble getting down without turning tyres. 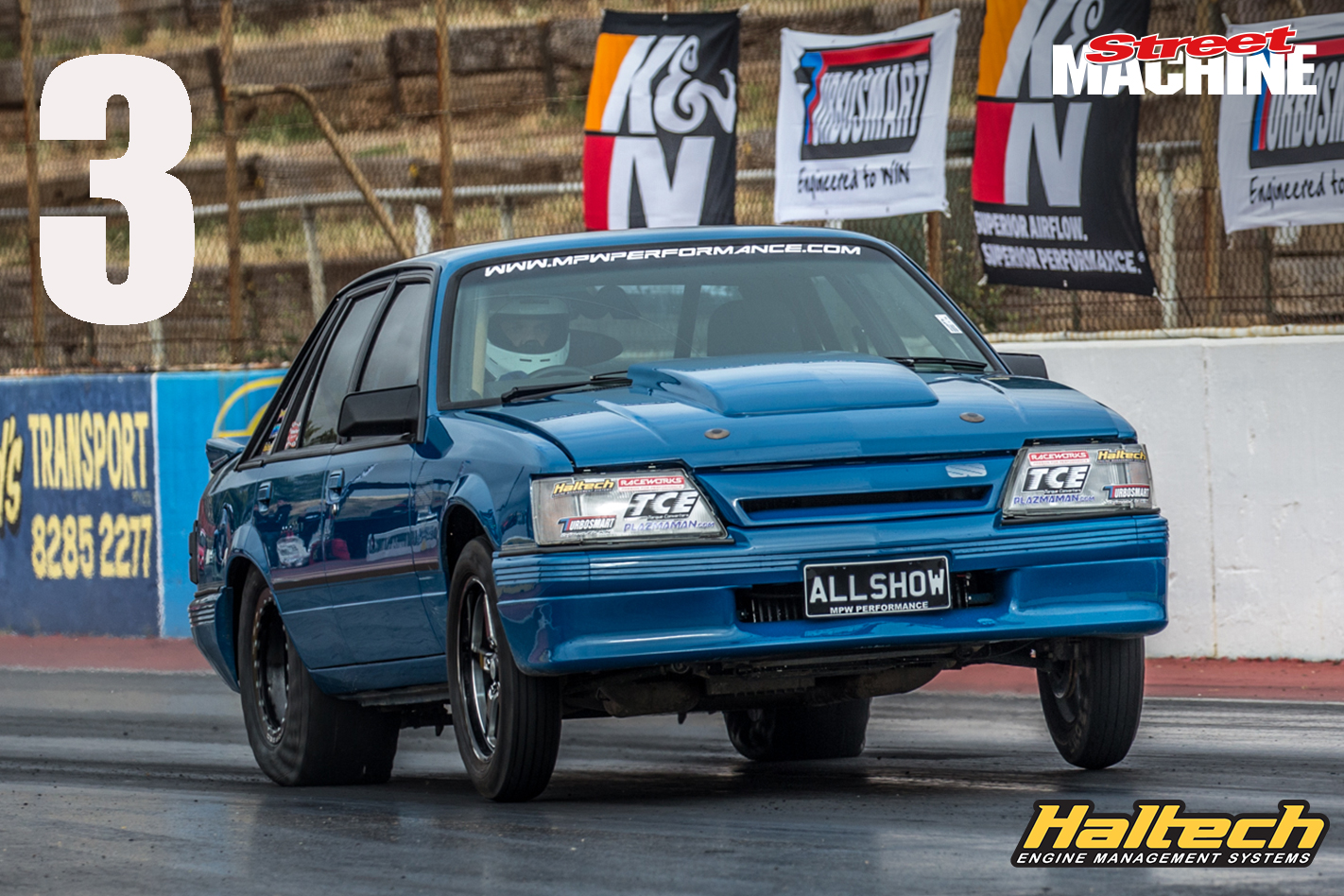 The same was true at Mildura’s Sunset Strip, where we had 38-degree ambient temps. Here Quentin was able to close the gap to Drewy and they were pretty much neck-and-neck. Adam Rogash battled fuel pump issues and finally made some passes late in the day, but again had trouble putting down the power and stayed in third place. Harry had serious gearbox problems and was a long way off the pace – it would be the last day we saw the HQ in action for the week.

At Swan Hill Dragway Quentin took the lead from Drewy by a couple of tenths, running the first and only seven-second pass of Drag Challenge 2017 – a 7.99@174mph. Adam ran his first representative pass of the week, an 8.25, and Drewy ran a couple of 8.20s – not enough to keep his lead. 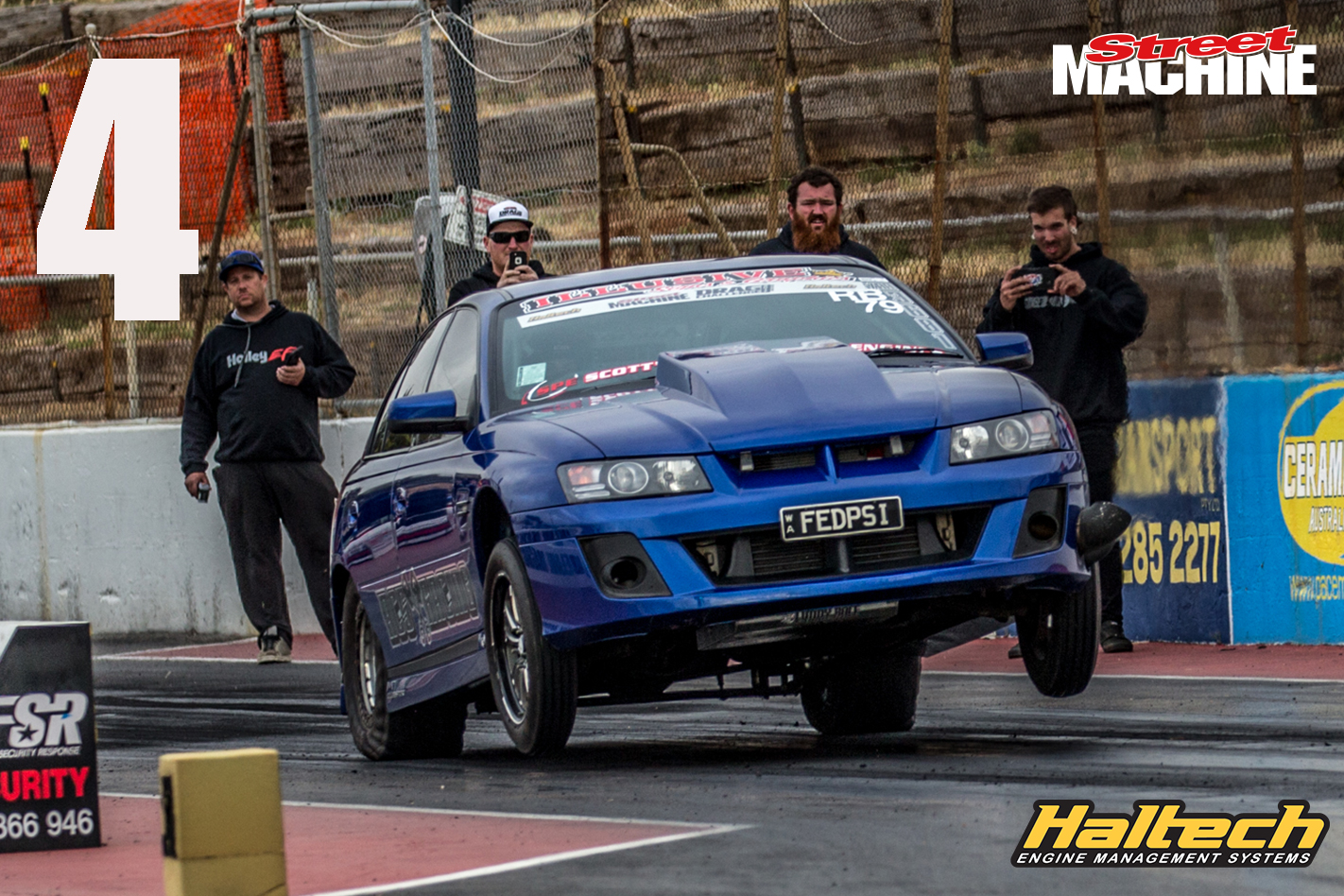 As we know, Portland was a wash-out, so that left just the final day at Adelaide International Raceway for Drewy to retake the lead from Quentin. Adam was now seemingly too far behind to be in contention, plus he headed back to Melbourne for the birth of his baby boy Thursday arvo, leaving John Pilla on driving duties, who had never raced the car before. Quentin nailed an 8.00, the ever-consistent Drewy laid down another 8.20, and then the heavens opened and put an end to racing, cementing Quentin as the Haltech Radial Blown winner and overall winner of Street Machine Drag Challenge 2017. 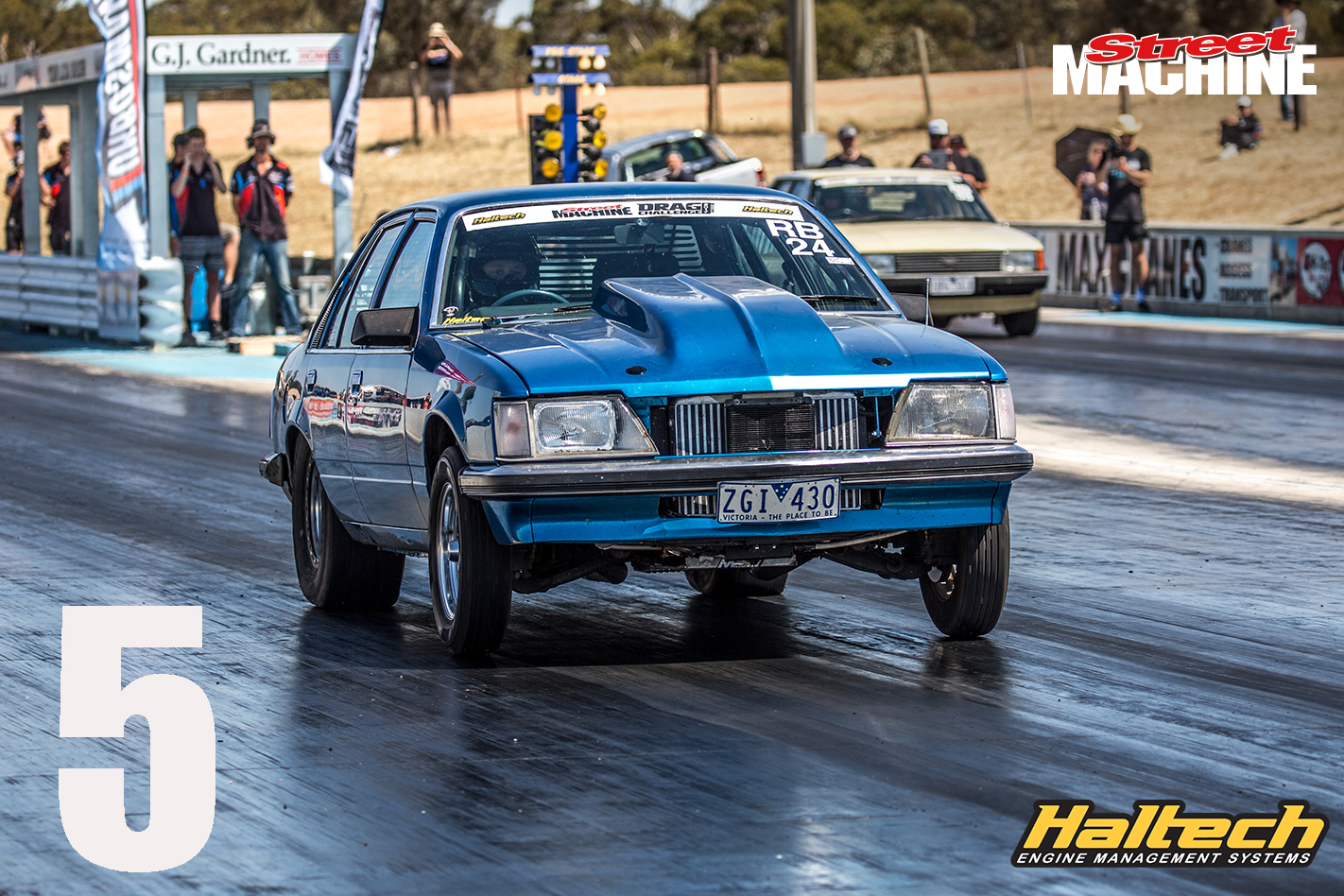 John Pilla brought home Adam Rogash’s ALLSHOW VK Commodore in third place with a solid 8.50 pass during his first race in the car. Fourth place went to West Aussie Josh Lopreiato in the mental single-turbo VZ ClubSport, while Luke Foley took out fifth with his twin-turbo VH Commodore, which he drove from Melbourne to Adelaide and back for the event. On the last day Luke also ran a PB of 8.36, getting off it at 1000ft. The car is a freak, powered by an alloy 6.0-litre with aftermarket rods and pistons, factory crank and factory heads. It just keeps getting better.

And yes, every car in the top five is LS-powered – thankfully Jason Ghiller took out sixth with his Barra-powered XD Falcon.