MANY street machiners will have a begrudging respect for the Sigma, Chrysler Australia’s bigger-than-most four-cylinder family car, even though it more-or-less killed the Valiant. Designed by Mitsubishi in Japan but adopted, extensively re-engineered and manufactured in Australia, the Sigma was to Chrysler Australia what the Commodore was to Holden at the dawn of the 1980s: a smaller, lighter, fuel-efficient family car. 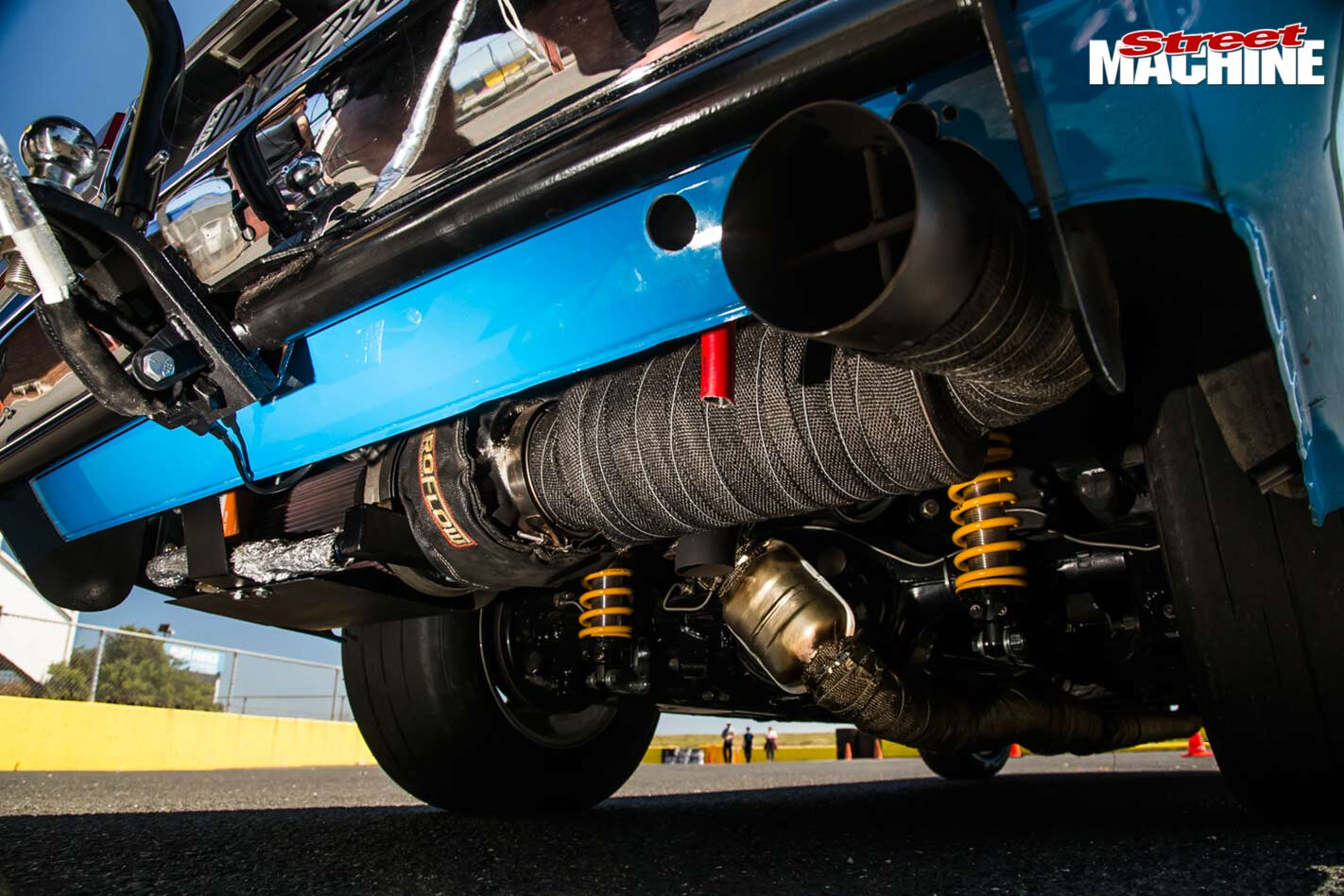 But Dominic Pelle didn’t care about all that, because for Drag Challenge 2018, he stuffed a freakin’ enormous V8 LS into one, plumbed it with a turbo, had it all legit engineered for street rego and went hunting for eights! Fitting the 6.0-litre, all-alloy, ex-Commodore V8 to the Sigma involved a modified front crossmember and GM Performance Parts switcheroo sump intended to fit an LS into a Fox-body Ford Mustang. The turbo – a BorgWarner capable of spooling enough air for 1000hp – lives not in the engine bay but under the boot floor, installed on a laser-cut flange plate and its own crossmember, and fed from two 2.5-inch primaries that meet under where the back seat used to be. Dom and his mates who helped – Simon Render and fellow DC participant Nathan Clarke – are all ‘in the back shed’ blokes, so the exhaust was fabbed from bits of scrap pipe.

The fuel system – PULP and E85 – is based on an Aeroflow dual-chamber tank in the boot, sealed from the cabin and drained by two Walbro pumps. It’s intercooled too: water-to-air for the street, and with a bit of extra cooling provided by an icebox in the boot. With the turbo out back, the easiest path for the intake plumbing was through the cabin. No back seat; it’s engineered and registered as a two-seater.

The trans is a Shift Right-built, Reid-cased Powerglide that required a few tunnel modifications to fit under the Sigma’s floor. The diff is suspended on coil-overs; it’s a tough Ford nine-inch with Mark Williams axles and an alloy carrier. 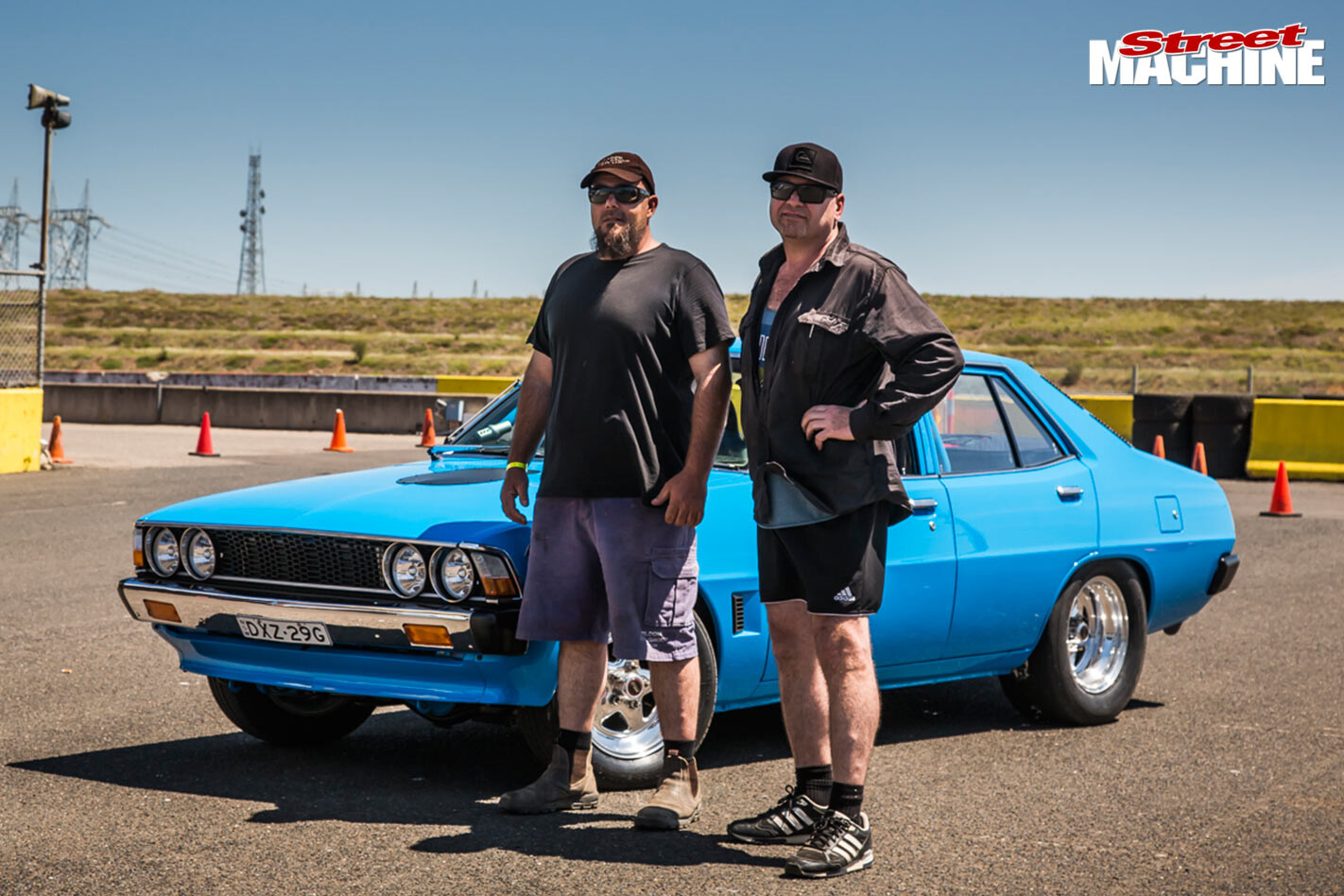 Last year Dom squeezed 275s under the rear, but the 2800rpm converter was doing him no favours in the 60-foot, so his best recorded time over the quarter for DC was only an 11.8. For this year’s Drag Challenge, he’s fixed that issue with a new 4000rpm converter, plus a new set of 3.5:1 gears. But the biggest change is a downsize in tyre to a 235 radial, pulling Dom out of the Haltech Radial Blown class and into the new-for-2019 Tuff Mounts 235 Blown field.

“I did it more as a dare than anything else,” says Dominic. “We were sitting around in the shed one night talking about the new classes and tyres, and my mate Nathan dared me to run the car on the 235, because I thought it wouldn’t hook up.”

Dom took Nathan up on his dare, and headed straight to Sydney Dragway on an old pair of 235s, running a best of 8.87@152mph – not a bad improvement if we do say so!

“There’s still a bit more in it,” Dom reckons. “I improved on the 60-foot on a run later in the day, but the shifter cable broke, so it should be capable of roughly an 8.60.”

With a high eight-second timeslip under his belt, Dom is hoping to maintain a 9.20 average for this year’s DC and finish in the top 10 of the Tuff Mounts 235 Blown class – and to prove the Sigma’s mettle, the boys will be driving it over 880km from Llandilo, NSW to the start of DC at Calder Park in Melbourne.