THE Kenda 660 series has certainly become the benchmark for quality radial racing in Australia, and the second round at Willowbank last weekend took things to a new level. The racing was tight, the weather was mint and racers took advantage of great air and good track prep to knock out a seemingly endless list of PBs. 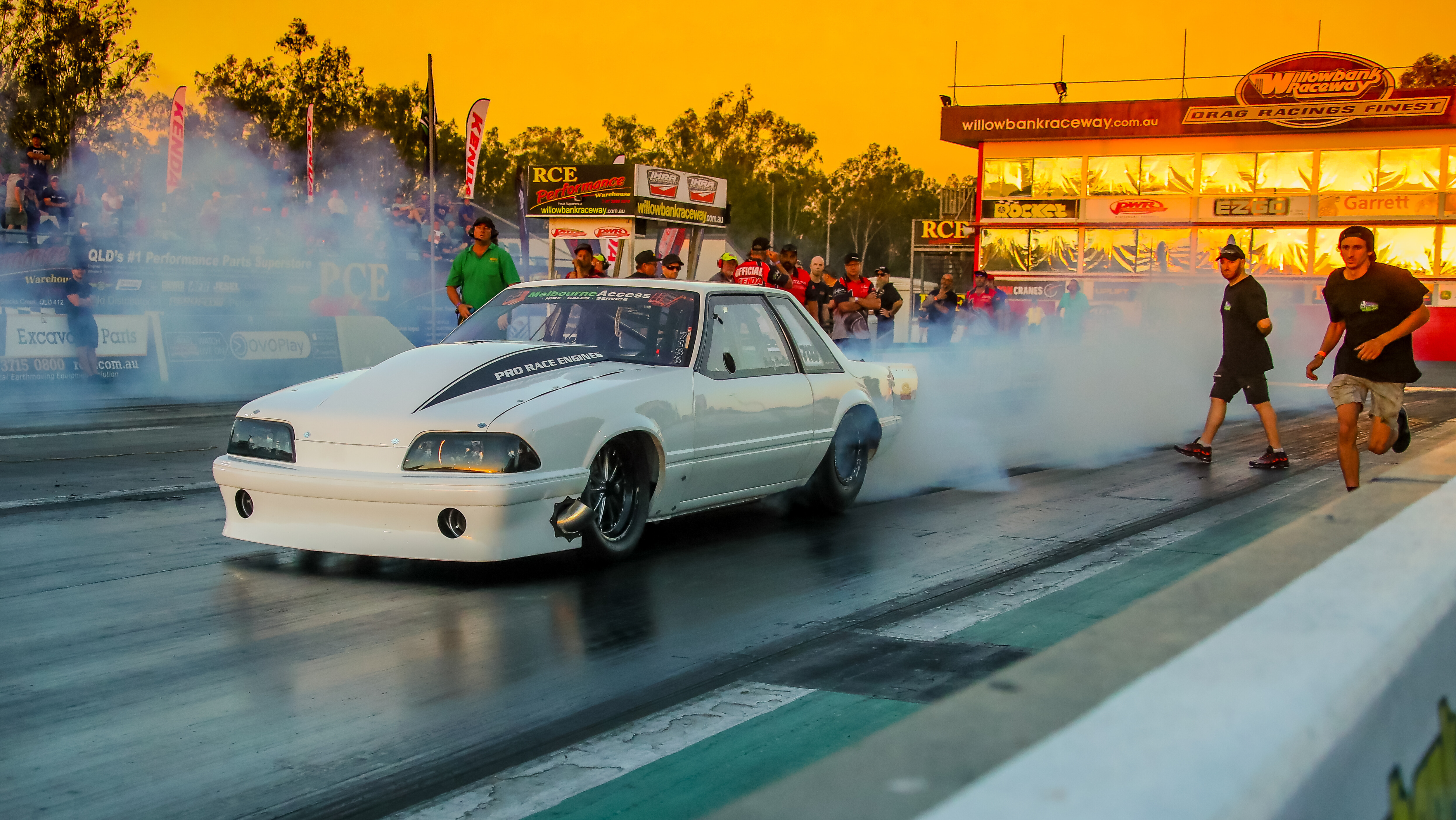 Victorian Harley Hamilton headed to Queensland after a last-minute rebuild by Pro Race Engines on the monster ProLine donk that powers his twin-turbo Fox-body Mustang.

After overcoming an issue with a faulty tyre gauge that saw tyre pressures being out by 4psi on early runs, followed by a faulty dump valve on the transmission, Harley went up against Kyle Hopf’s Noonan-powered 6boost Camaro in the early rounds of racing. With Terry Seng behind the wheel, the Camaro left on a .026 reaction time to a .75 for the Mustang, and clicked off the timers with a 3.95@198mph to Harley’s PB 3.94@197mph – a holeshot win for the Camaro. From the outset, Hopf and Seng were on point. In Thursday testing, they laid down an incredible 3.89@204mph, making the Camaro the quickest and fastest turbo radial car in Australia – not bad for one of the oldest cars in the field and still retaining steel roof and quarters.

MORERadial Revolution: Kenda 660 Round One

Their jubilation was short-lived when Perry Bullivant stole the quickest title in his Corvette with a 3.86 a few hours later, but the Seng/Hopf team swiftly reclaimed it with 3.83@202mph in the third round of eliminations. Despite the awesome individual results over the event, the team didn’t make the final.

One of the standouts of radial racing this year has been the 2004 Pontiac Firebird of Victorians Dan Szabolics and Dandy Engines’ Frank Marchese. Powered by a 564ci all-billet, Hemi-headed Pro Line motor with a massive F-3R-140 ProCharger (SM, Apr ’21), the entire car was built in Dan’s garage (with the exception of paint) – an incredible accomplishment in itself.

The Pontiac had only been raced on two occasions before the duo headed to Queensland. On its debut at Sydney, Dan had managed a 4.02@184mph on the tail-end of a meet hampered by rain, and a few weeks later, the duo shared the driving at a meeting where Marchese clicked off a 3.88@192mph (on his way to recording Australia’s first five-second radial pass over the quarter mile) and Szabolics a 3.97. “Heading to Kenda, we did nothing to the car but change oil and give it a spanner check,” Frank said. “We were hoping that with the weight of the car at 3050lb we could run mid-3.80s, but this thing is heavy for a ProCharger deal, and the blower is tapped out at 51psi of boost with the current gearing.” 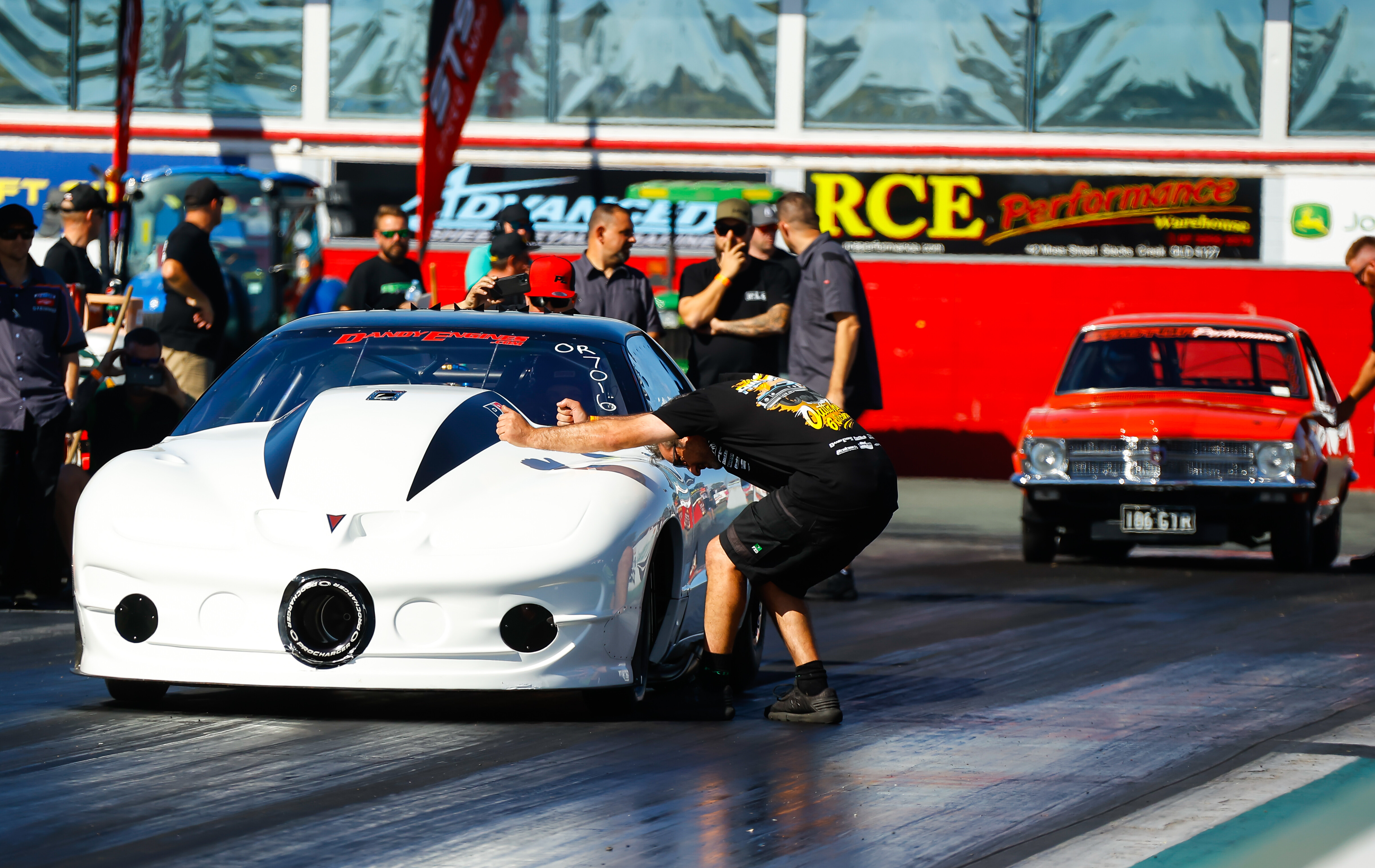 Despite this, Dan managed a best of 3.90 at Kenda. The boys did have an issue with the downforce of the car pushing the front splitter down into the track, causing it to break suction and make the front end bounce. “We are far from done and dusted,” Frank declared. “The car should run into the 3.70s; we just need the combination to work better and work out how to lighten the car.”

In the Speedy Diffs Outlaw 275 class, it was Queenslander Tony Webb all the way. Piloting his twin-turbo 565ci big-block Chevy-powered Torana hatch, Tony took out veteran Stu Henry in his Fox-body Mustang in the final with some solid numbers to boot – 1.1sec in the 60-foot and 2.91 at the 330.

For the Castle Hill Performance team, it wasn’t all barbecues and dancing girls. Owner Dale Heiler had been itching to unleash the new 540ci motor (CN billet block with Alan Johnson billet heads) in his Commodore after ditching the trusty cast 540 Chevy that pushed the car to a 4.11@187mph.

Electrical gremlins hampered early passes, and once that got sorted, the Commodore started bombing the tyres two seconds into the pass and turning right due to a cracked diff housing. They patched it up, but with the car 300lb lighter from the motor change, the team will need to get it back to Street Car Fabrications to sort the suspension. With the new engine combo now capable of an extra 500hp, bottom 3.90s should be the next stop. 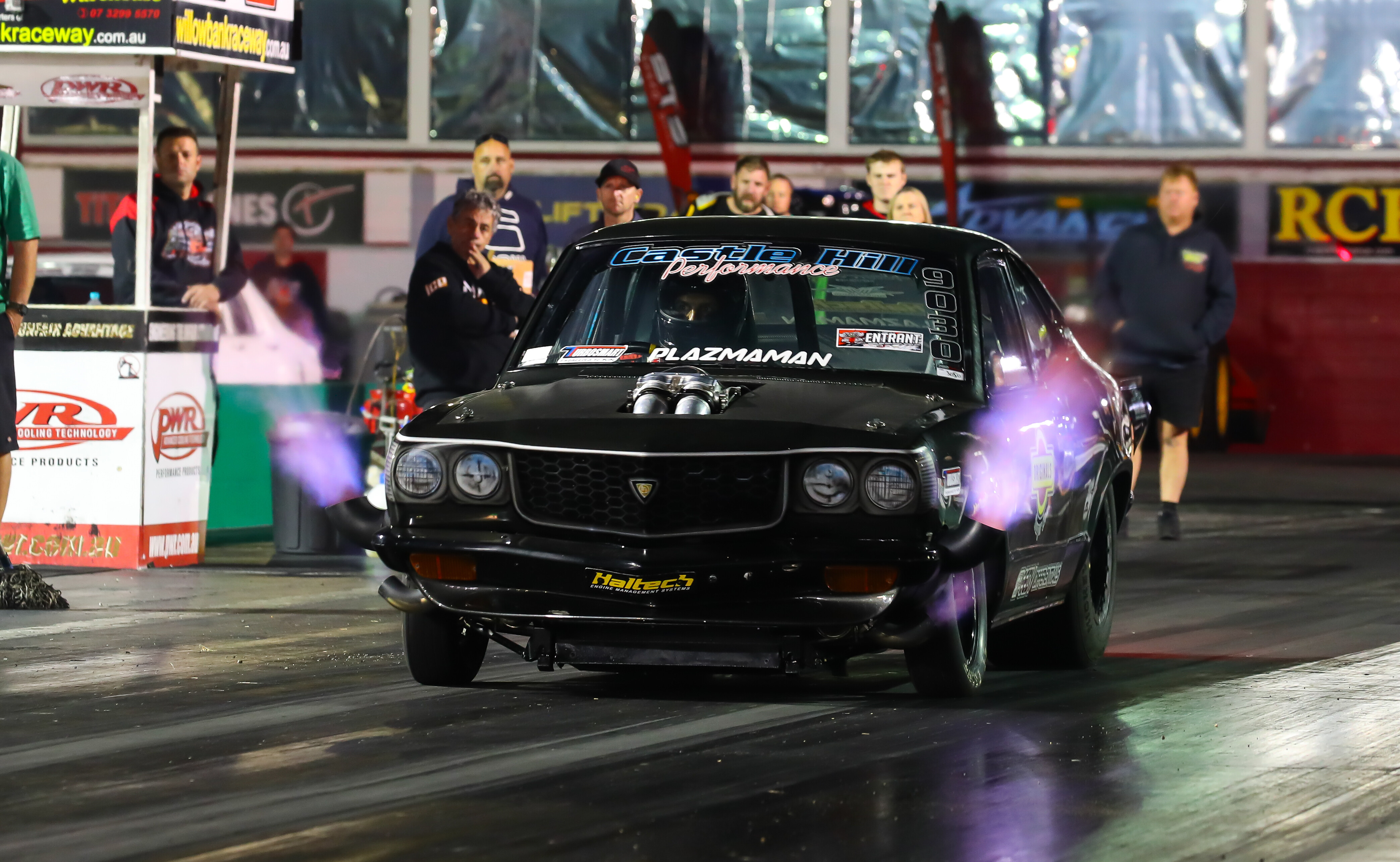 Nathan Farrugia was plagued by a boost leak for his first few passes at Kenda, which stopped his twin-turbo big-block Chevy-powered RX-3 from making more than 25psi of boost. Round after round the team tried something new, but even though the car was hampered, Nathan won his first two eliminations.

The problem was eventually found to be a busted wastegate diaphragm, and once that was repaired, on the next pass the car headed for the skies with a massive wheelstand. With a new car on the way from the States, the next Kenda meet will probably be the last for this RX-3. 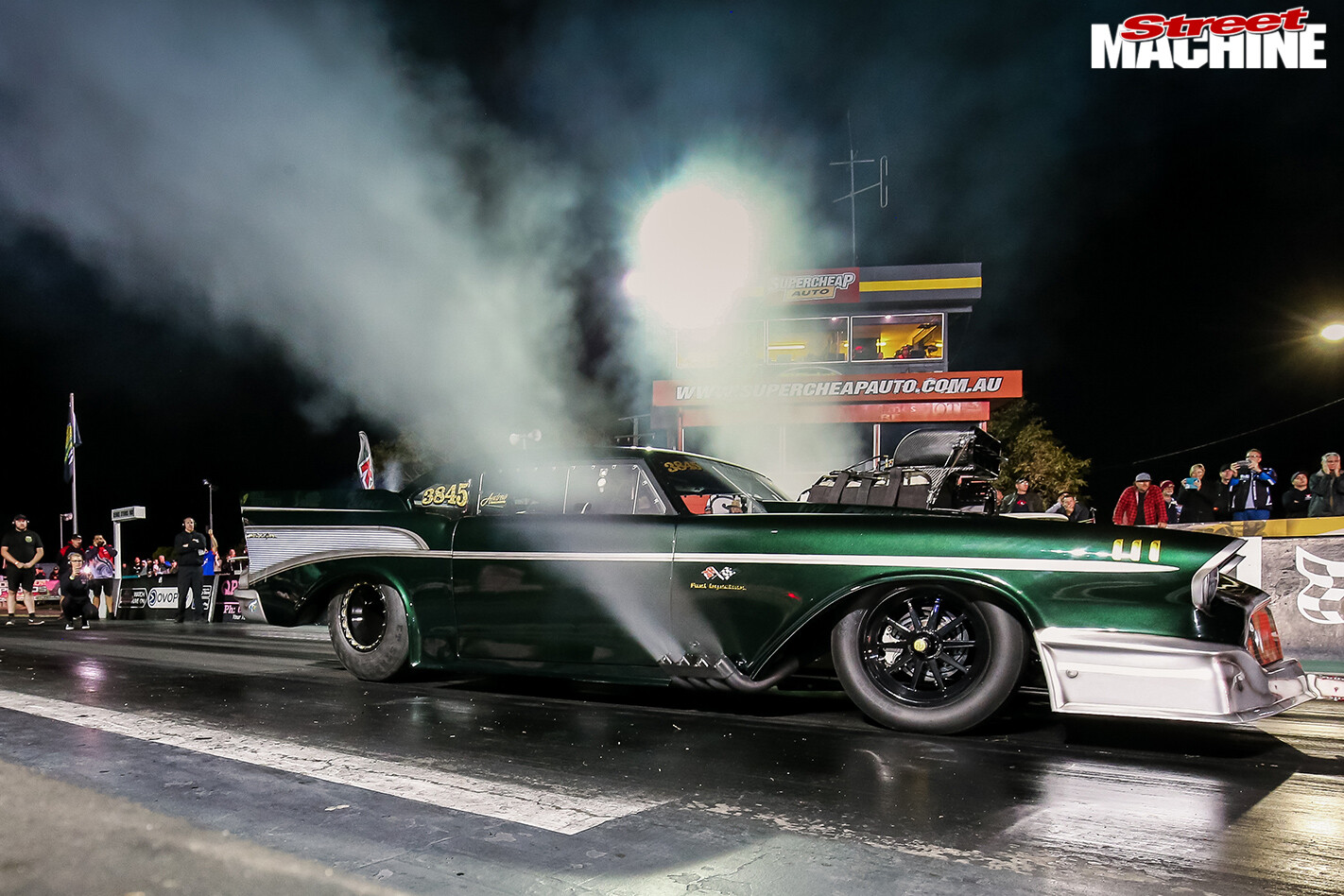 Adding to the exciting racing in the Race Parts Melbourne Outlaw Radial class was Wade Wagstaff, owner of Australia’s quickest radial car, a 1957 Chevy with a PSI D-rotor making around 53psi of boost on an all-billet 521ci Noonan motor.

“We broke the Lenco at the previous meet, so we decided it was time to step the transmission deal up from a three-speed Lenco with Bruno Powerglide to a Ty-Drive,” Wade said. “We also moved to a billet converter with lock-up and a five-speed Liberty transmission. On Friday, the car ran a PB of 3.80@199mph, bettered a few passes later with a 3.79. “I found out later I got off it early, so it probably would have PBed again with a 3.77,” Wade said. 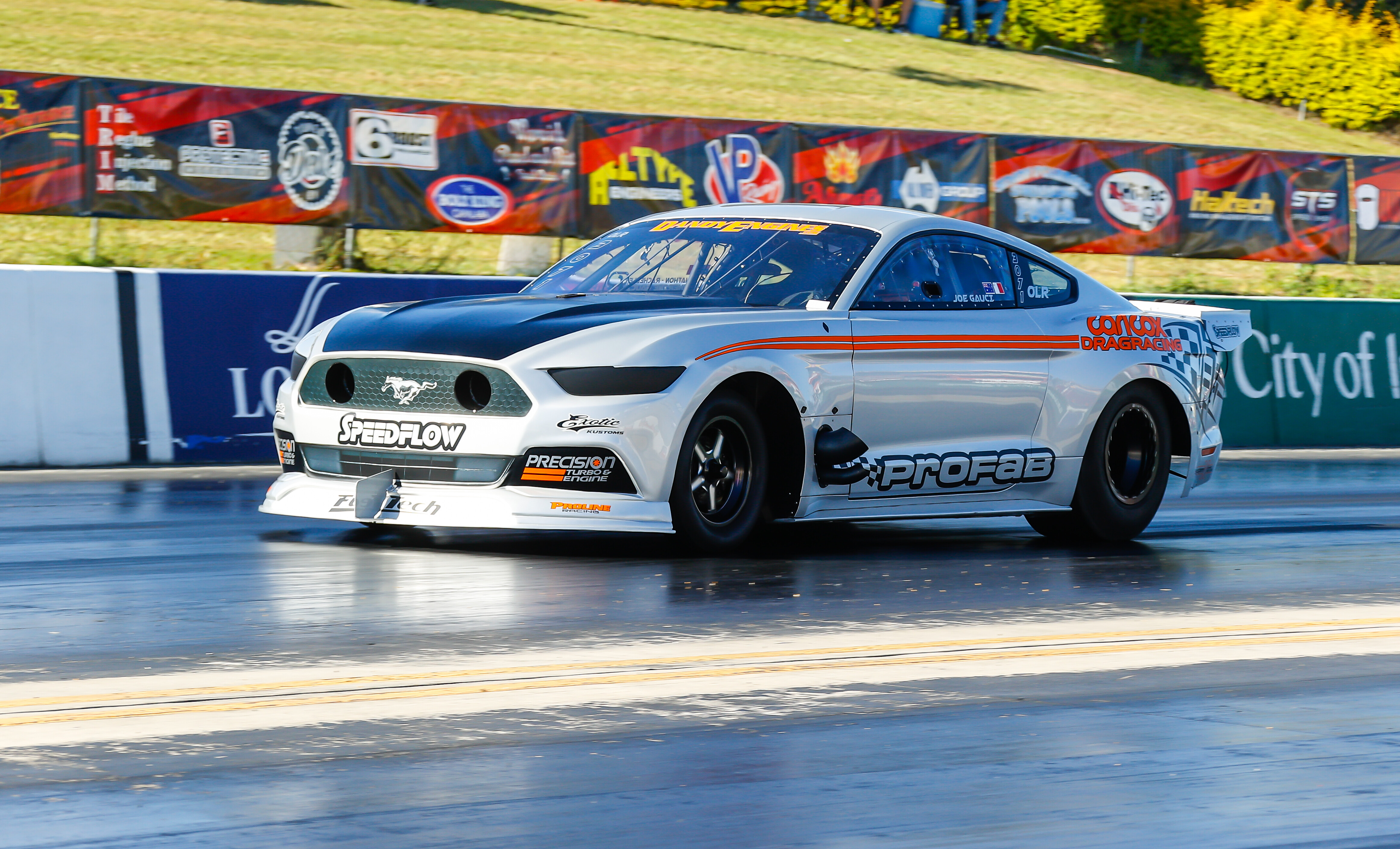 Joe Gauci and the Profab Motorsport Fabrications team also a set a new PB in their stunning 481X-powered Mustang, to the tune of 3.8-seconds at 201mph. 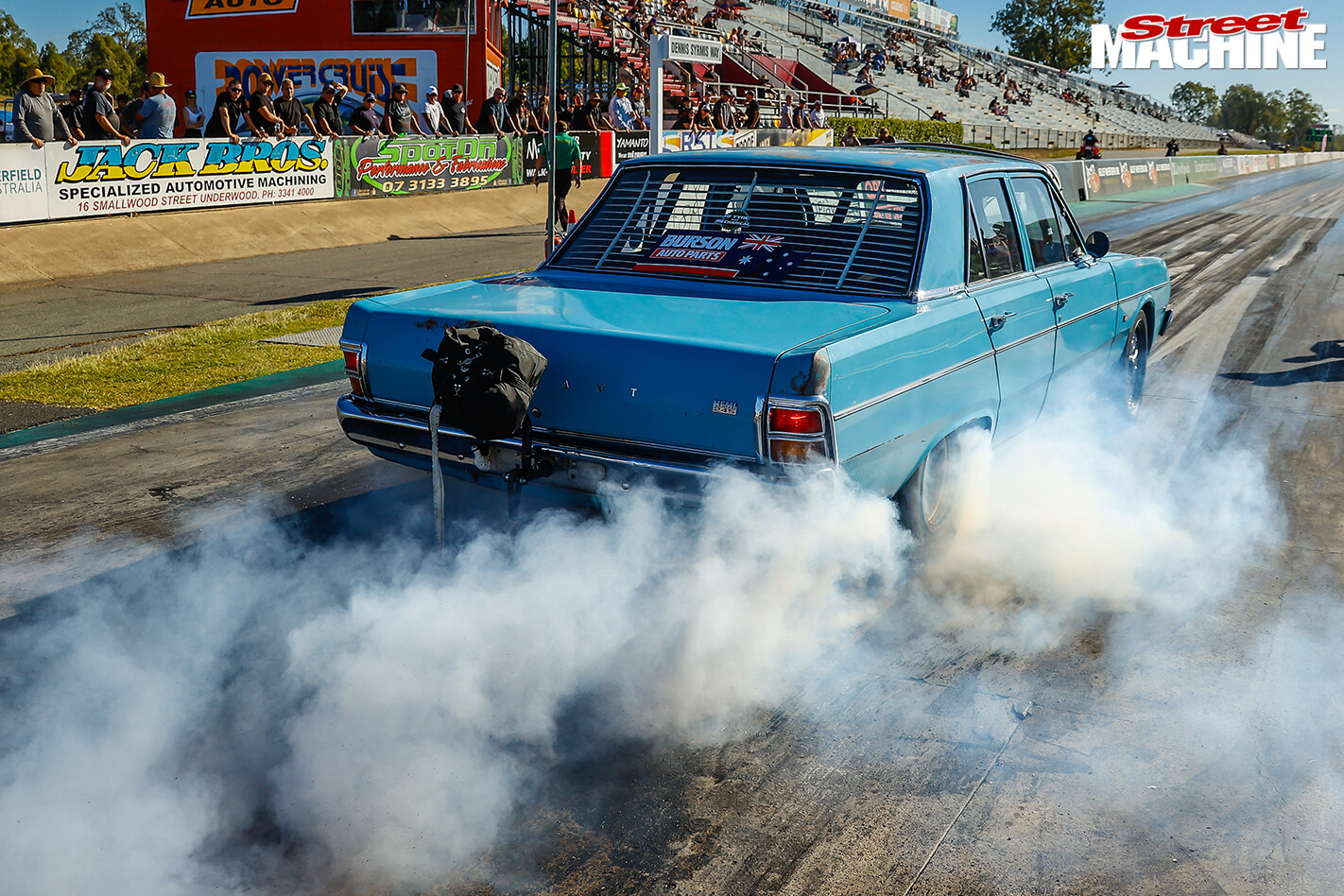 All in all, it was a brilliant weekend of radial racing, and Sydneysiders can look forward to the next Kenda round on 29-31 July at Sydney Dragway.