WHEN our mates at Unique Cars reasoned they’d attended enough car events that it was high time they hosted one of their own, we thought we’d better tag along and suss it out. They’d seen how much fun we’d been having running events like Street Machine Drag Challenge, and for their own foray into the event space they decided that while the whole Cars ’n’ Coffee formula was a winner, it could be improved upon by incorporating a more dynamic element. And so they concocted a Cars ’n’ Coffee-style event to be run at Sydney Motorsport Park’s South Circuit, which included plenty of opportunities for entrants to cruise the track, along with race car demonstrations and ride-alongs. The name ‘Rolling 30’ is a reference to that dynamic element of the event, along with the rolling 30-year-old rule that qualifies vehicles for historic registration in most Australian states. 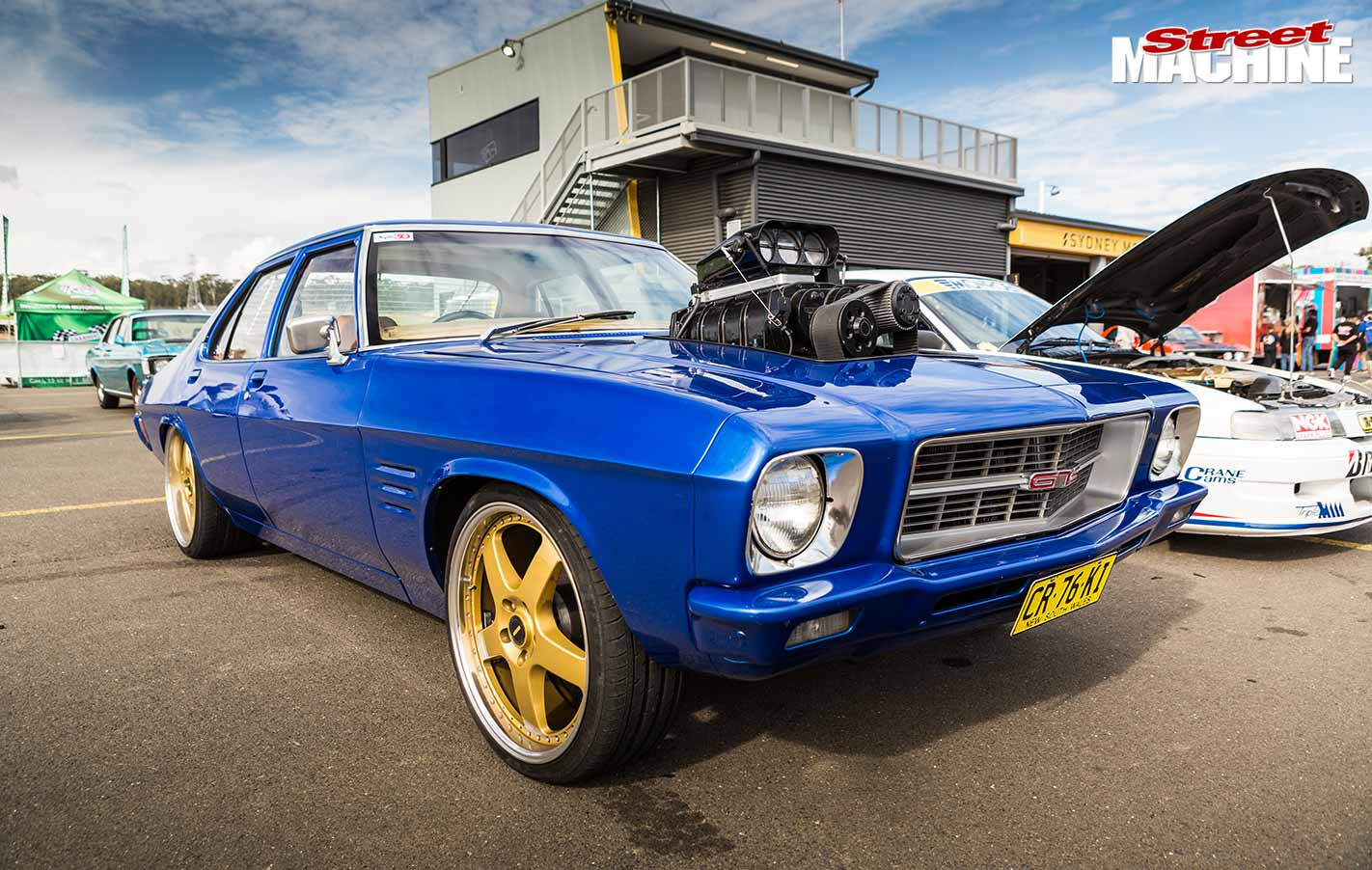 Owners of cars aged 30 years and older were able to park up, grab a cuppa, check out the many and varied classics that had assembled, and enjoy the decidedly relaxed atmosphere of the day. A couple of Drag Challenge veterans in Alysha Teale, John Kerr and Gizmo Grima had their toys out for a play, but not all the cars were typical Street Machine fare, with everything from a blindingly fast Lotus open-wheel race car to an oh-so-cool 13B turbo-powered HR ute on offer, but everyone seemed to lap up the variety. Perhaps the cars to generate the most interest though were two of the rarest and most valuable Australian muscle cars in existence: a pair of XA GTHO Phase IV Falcons. The red one, which featured on the cover of Unique Cars #425, was for sale (asking price: a cool two-mill). The Calypso Green car was at the event for display purposes only, thanks to Chester Fernando of Muscle Car Stables. Witnessing both Phase IVs take to the race track at once was a remarkable experience.

At the other end of the attainability spectrum, I turned some laps in my thongslapper-powered LC Torana, and really enjoyed the opportunity to take friends and family out for a spirited cruise. I also managed to wrangle event organiser Joseph Lenthall into the car for some laps and a chinwag towards the pointy end of the event. “Unique Cars wanted a successful event – their own Drag Challenge – so that the brand could extend its involvement in the scene and with its clients, readers, advertisers and traders,” Joseph said. “We had 167 cars entered and more than 300 people went out on track, whether that was as a driver, secondary driver or a passenger. Nearly 1000 people came through the gate to have a look, which was fantastic for our first event. To add some colour, we invited specific race cars all older than 30 years to do some demonstration laps with passengers. We had a collection of Group N historic cars, Improved Production cars and HQs.” At the mention of race cars, Joe offered to line me up some hot laps in his mate Dan Ridley’s Improved Production VK Commodore (SM LSX Tuner #3), which I’d been admiring in the pits earlier that day. Powered by a mental LS1 making north of 450rwhp, it was brutally fast, and with its rear tyres well and truly spent by that stage in proceedings, I giggled inside my helmet as Riddo lapped the technical South Circuit layout faster than I imagined possible – more often than not with tyres ablaze. It was a truly rad experience and one I certainly won’t forget in a hurry.

“The variety of the cars has been the highlight for a lot of people; that’s been the feedback,” concluded Joe as the first Rolling 30 drew to a close. “I thought the traditional V8 guys might not enjoy the Japanese or Euro stuff and vice versa, but there was a lot of mutual appreciation there. That’s great, because that’s what Unique Cars is all about; it’s not just muscle cars.” 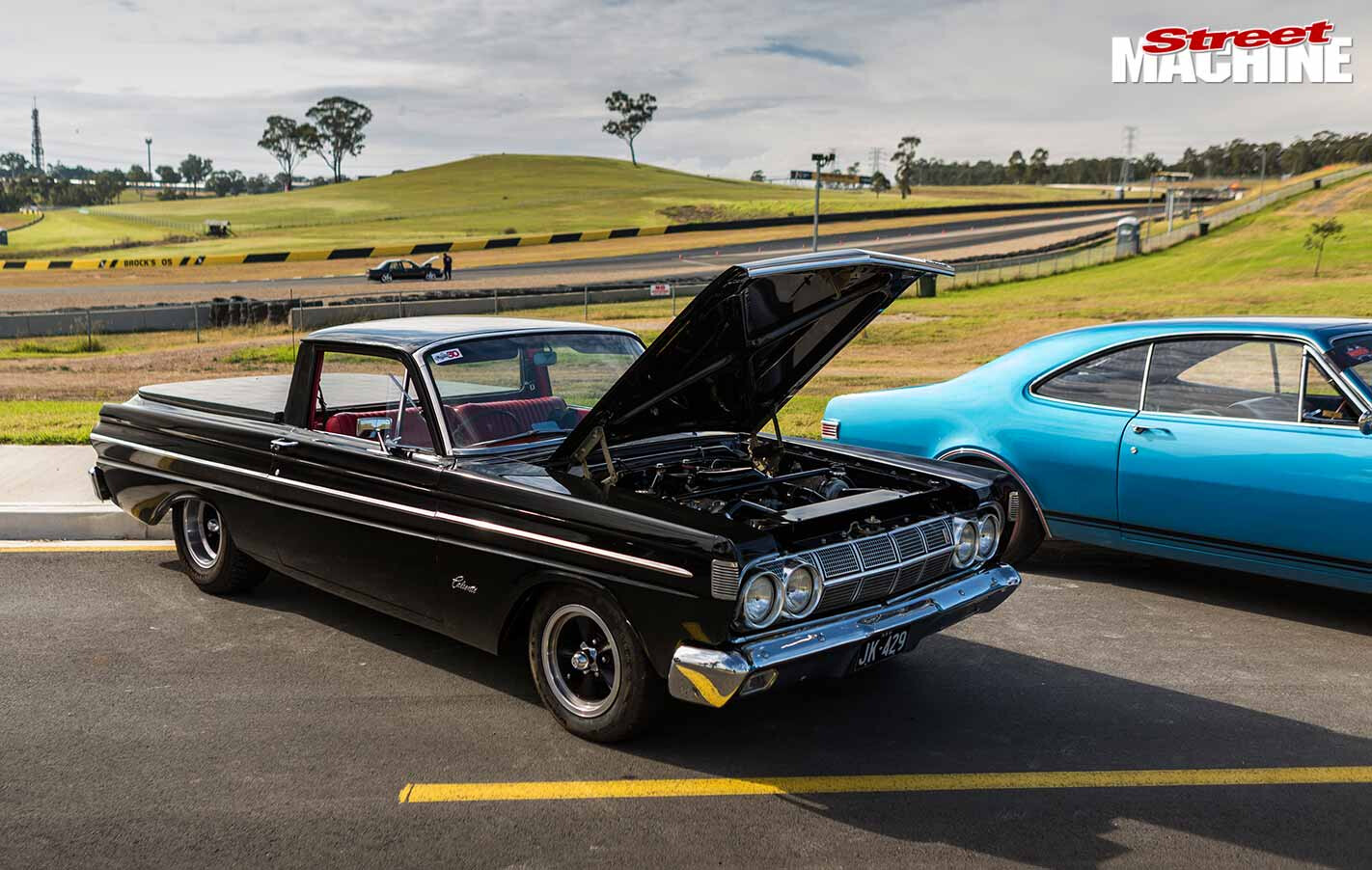 2. We featured John Kerr’s very cool twin-turbo Mercury Comet/Ranchero ute in the April 2018 issue of SM, and while it had some uncharacteristic overheating issues at Rolling 30, it sees plenty of street miles. 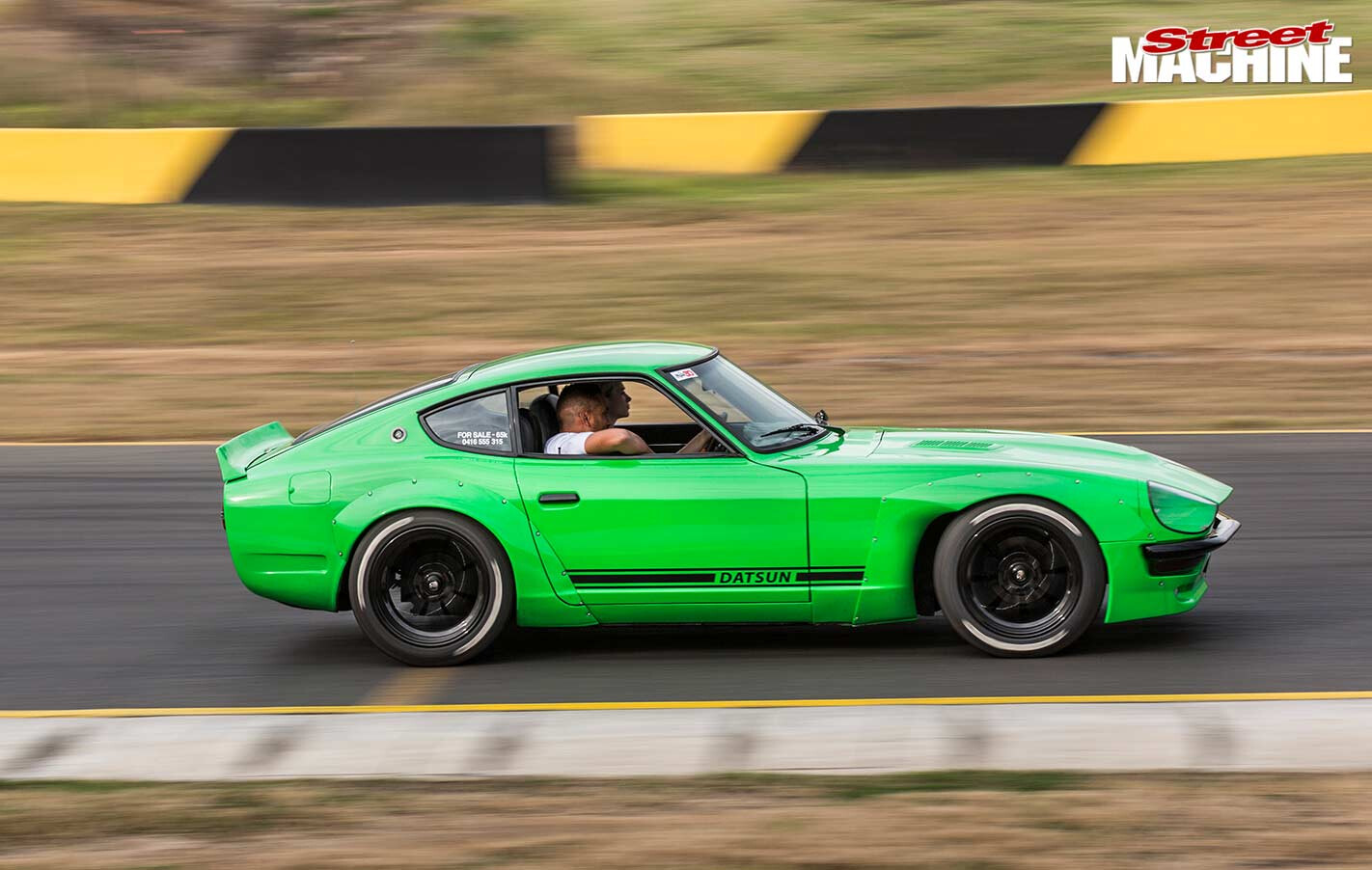 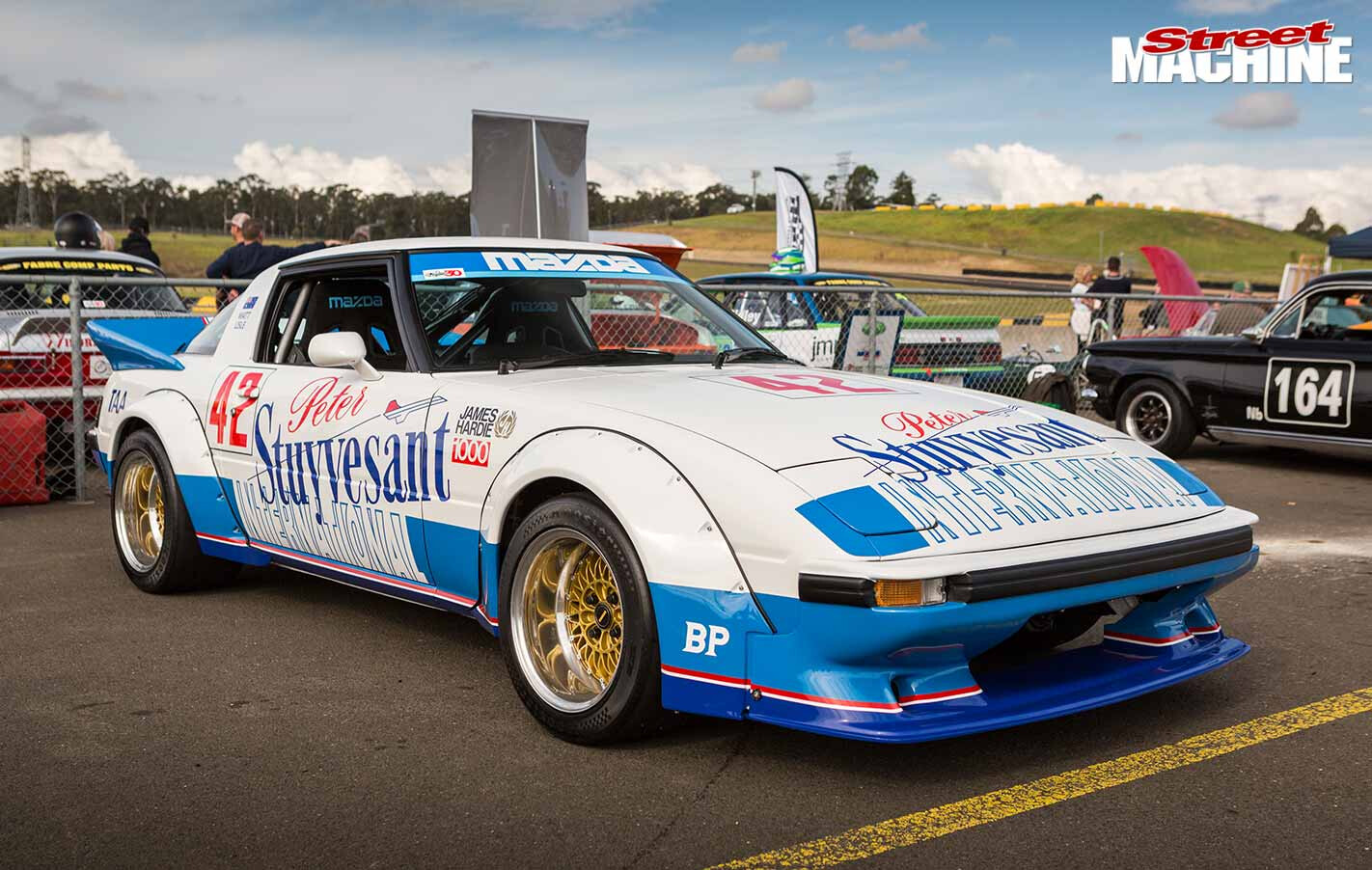 4. I’m no rotary guy, but when this menacing 20B-powered RX-7 pulled up beside me during a cruise session, I suddenly ‘got it’. Matt Lisle of Mr Enforcer Engineering built the car, inspired by his love of early RX-7s and his dad (who sadly passed during the build) being a big Moffat fan. The livery is period-perfect, and the angry all-motor three-rotor braps with the very best of them. 5. Surprise! I wandered past Mick Jurenec’s Holden HR ute on the hill and poked my head under the hood for a squiz. Of all the powerplants it could have had, I certainly wasn’t expecting a 13B turbo! 6. Drag Challenge DYO queen Alysha Teale’s HQ turned plenty of laps at Rolling 30 with car-loads of passengers. She shared the driving duties around, too. 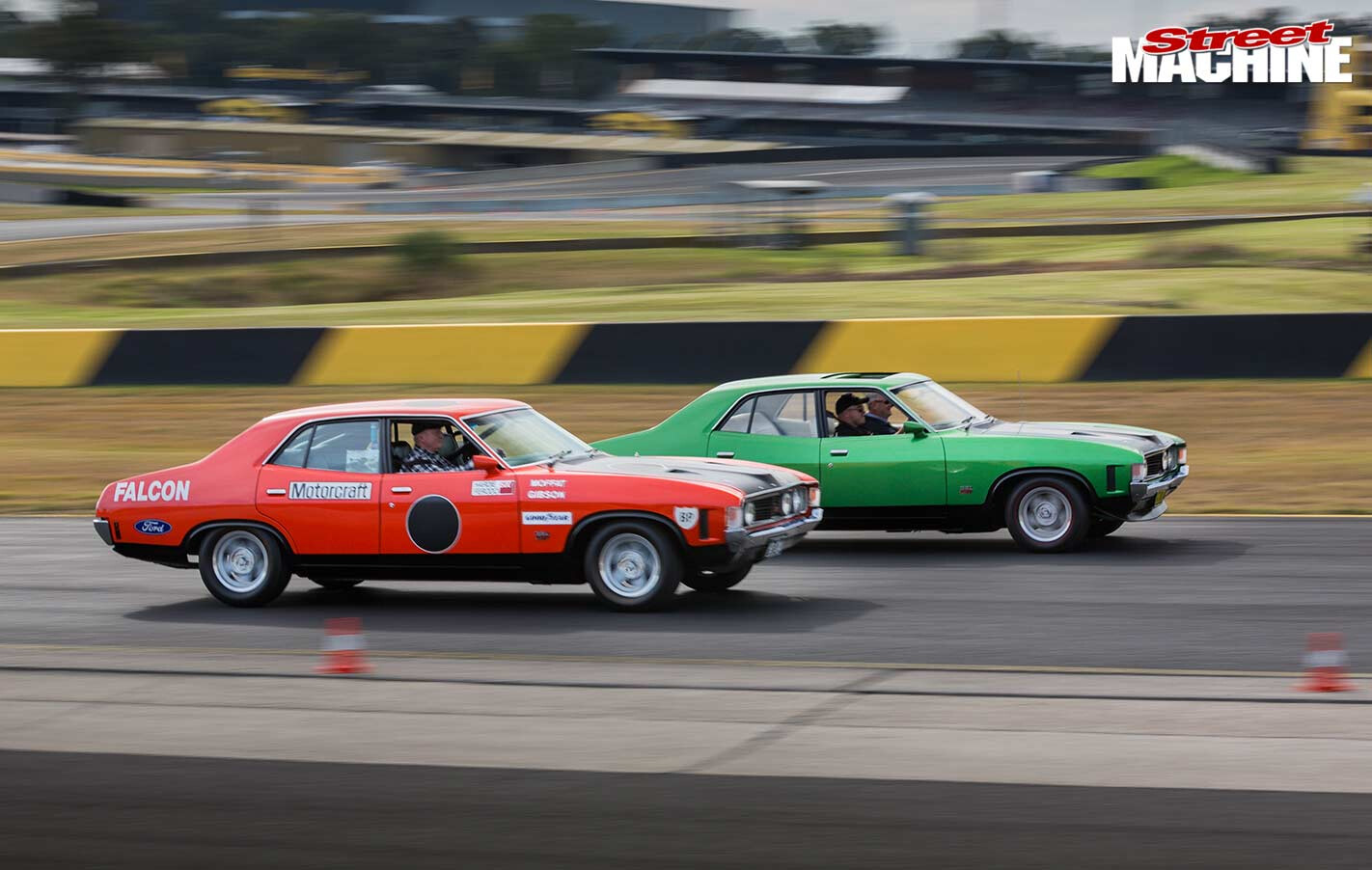 7. Several million dollars’ worth of Aussie muscle cars lapping the Sydney Motorsport Park circuit. It was magic to see both of these Phase IV GTHO Falcons in action on track at Rolling 30. 8. There can only be one number one. This is the first-ever HSV VL SS Group A Walkinshaw – Walky for short – a very significant vehicle in the Aussie muscle car landscape. 9. Kelly Ball’s Capri has graced the pages of SM before. It’s a genuine South African-built V8 Perana, making it a fairly sought-after piece of kit. 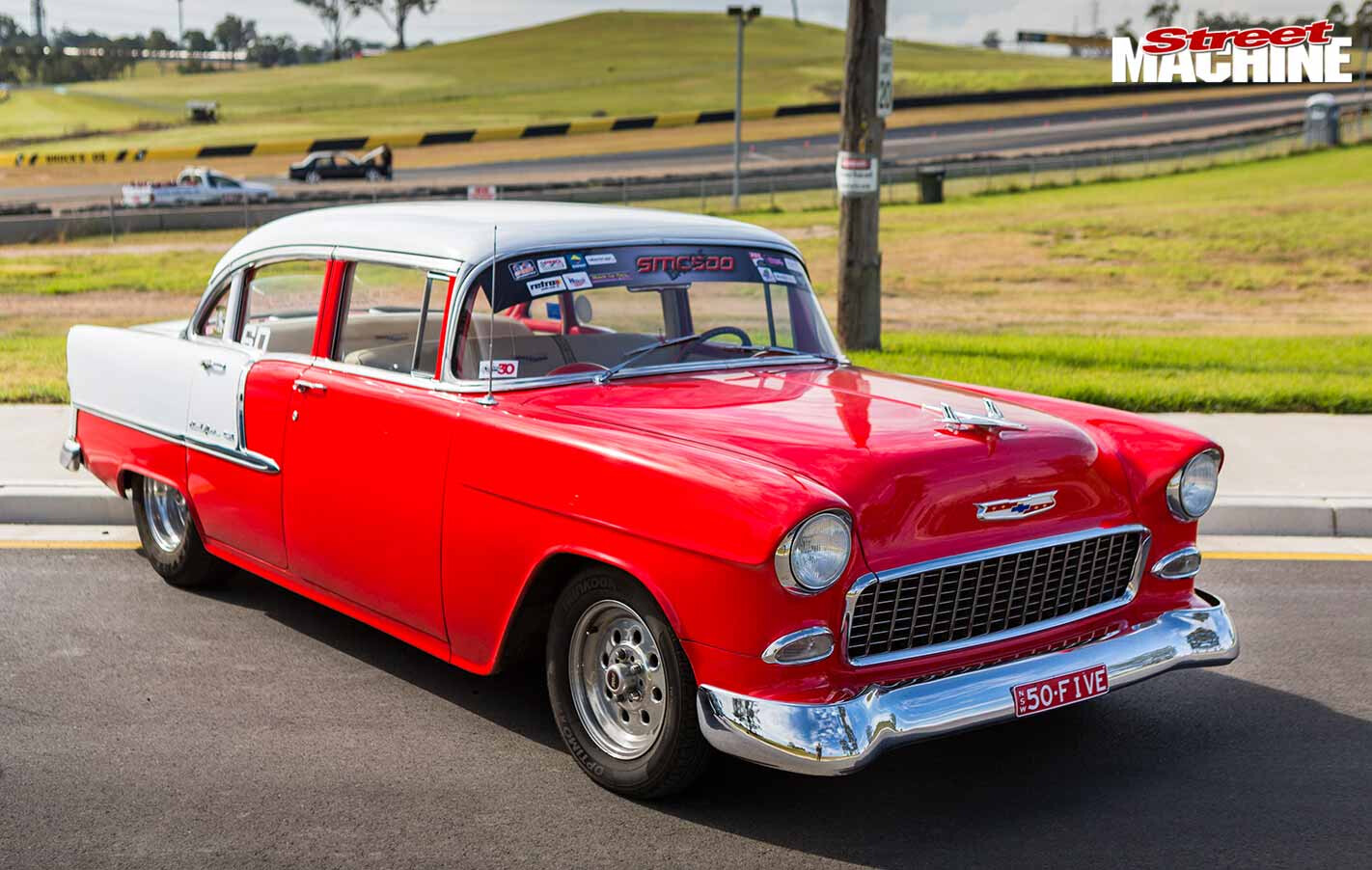 10. Daniel ‘Gizmo’ Grima will have a crack at anything, from Drag Challenge to Cooly Rocks On to Powercruise, Summernats and everything in between, and you can bet he’ll drive his gorgeous ’55 there and back, too. It was no surprise to see the Chev getting wailed on with a full complement of passengers at Rolling 30.