The people have spoken: XBOSS is your 2016 Street Machine Of The Year, proving it can win hearts as well as judges' votes

IT WOULD be tough to argue that Chris and Colleen Bitmead’s Falcon coupe, XBOSS, isn’t the greatest street machine ever built in this big brown country of ours. In fact, you can even say it’s one of the best cars built anywhere, anytime, given all the accolades it received at the Detroit Autorama earlier this year, where it was selected as a Great Eight finalist for the highly prestigious Ridler Award.

While making the Great Eight was the primary goal for the XBOSS team, and proved that the car ticks all the boxes when it comes to winning points at shows, the real test for any car is when it’s put to a popular vote and judged not by people with clipboards but by your regular car-loving public. That’s why the People’s Choice award at any car show is so coveted – it proves that your ride appeals to folks of all ages, genders and backgrounds. 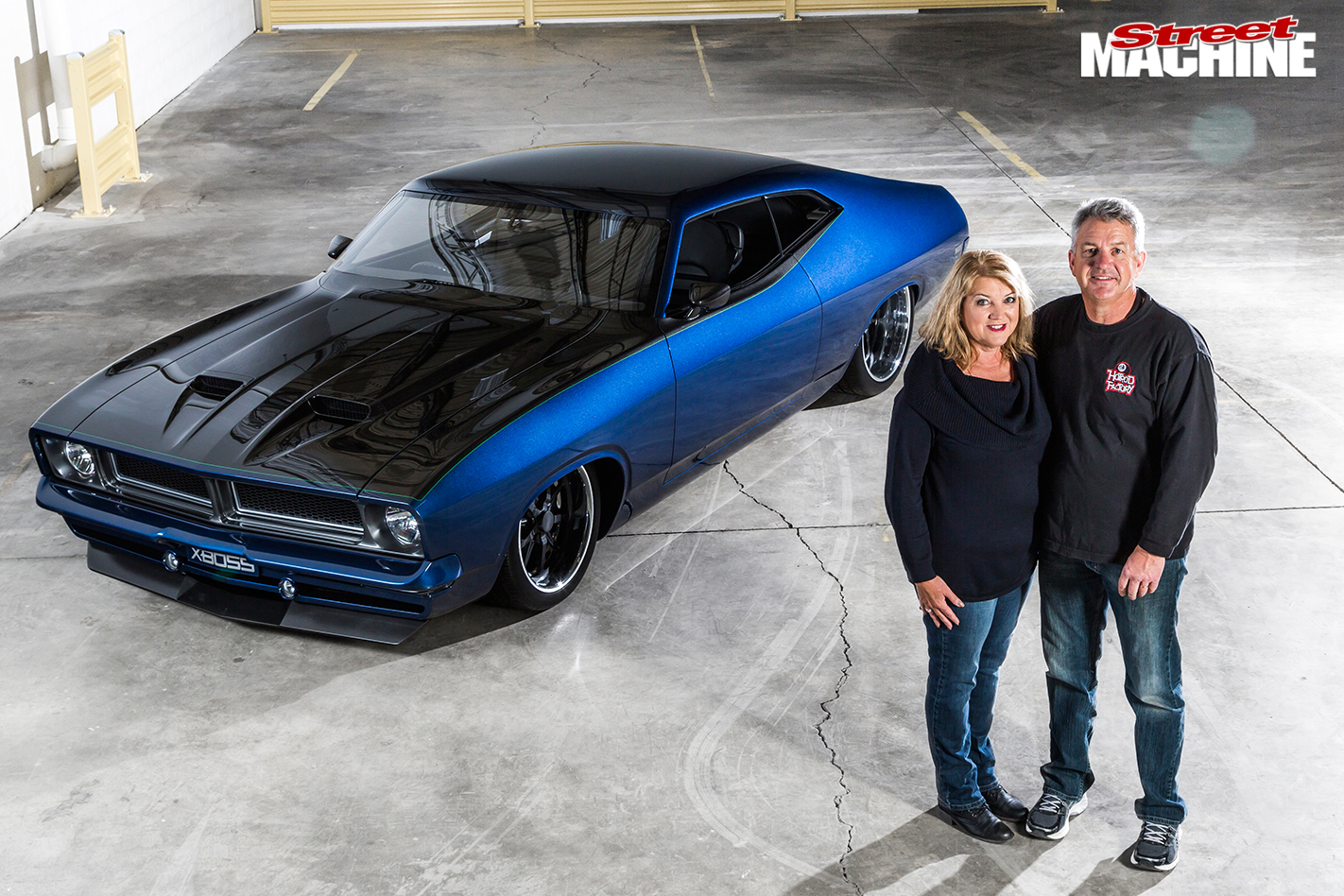 While a lot of people were calling XBOSS the Street Machine Of The Year pretty early, Chris himself was never certain: “You never know what people will think and you start second-guessing yourself.”

Well, the people have spoken – and voted – and the SMOTY trophy could not have gone to a nicer home. It’s the first time the trophy has crossed the Nullarbor, so it was a real honour for me to hand it to a fellow West Aussie.

But we had to make it a bit of a surprise.

With family and friends in tow, we walked into Chris’s office on a Friday afternoon and completely blindsided him. His genuine surprise and joy – once he realised what was going on – was great to see, and we got it all on film. 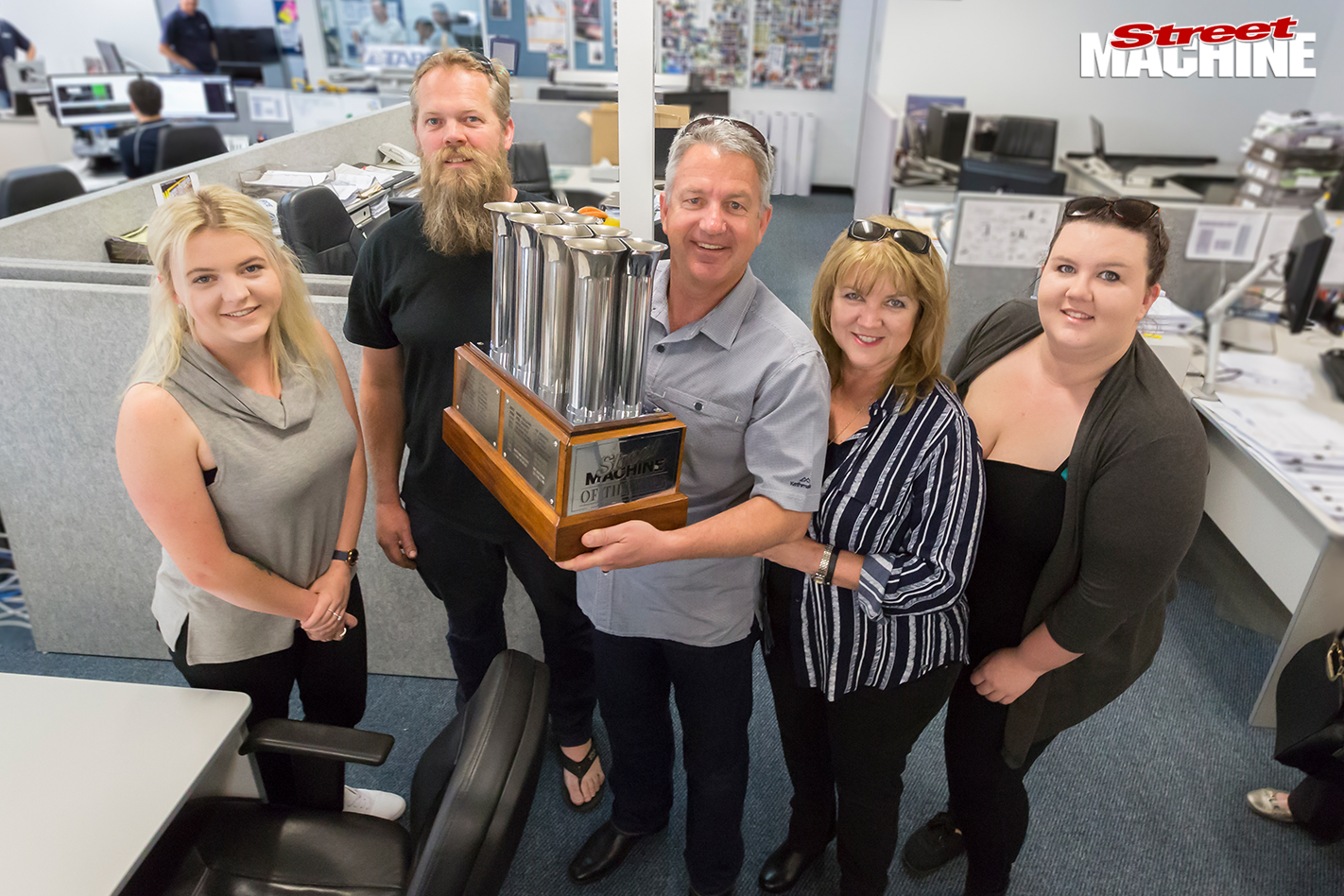 Chris and Colleen with their daughters Holly and Shelyce, along with Travis Sparrow, who was involved in the build of XBOSS from the very beginning

We walked in and completely surprised you with the Street Machine Of The Year trophy; how did it feel?

To be honest, I was completely blindsided. I was expecting to have lunch today with my wife and two daughters, which was really cool as we don’t often do that. Then I wondered why my daughters were holding a couple of GoPro cameras, but it still didn’t click. Then I turned around and saw Travis [Sparrow] holding the trophy. Blown away is an understatement.

Travis was very involved from the start, wasn’t he?

He was the first person I spoke to when the car was advertised in the paper, and I asked Trav if he knew about the history of the car, so yes, very much so. 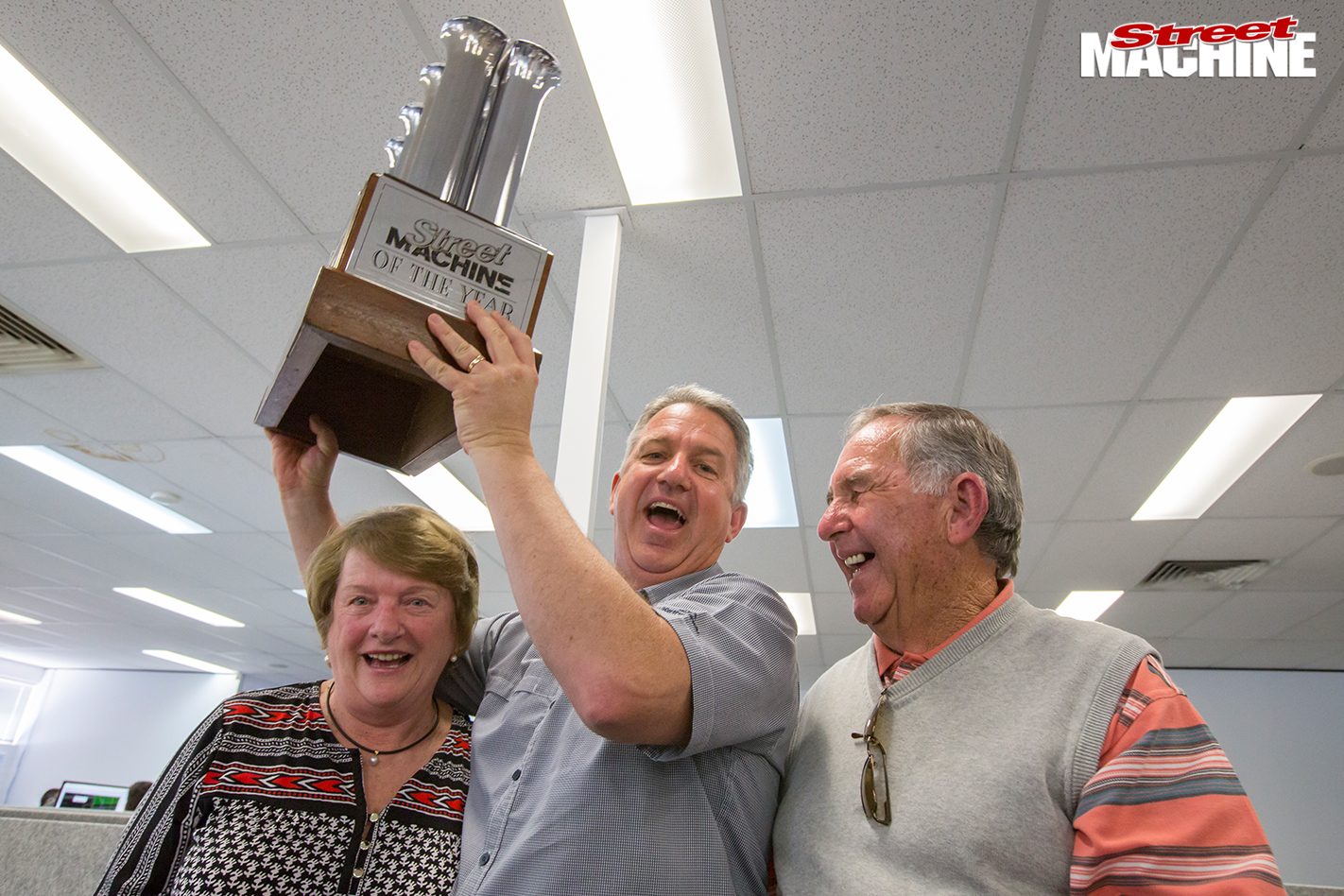 Chris's parents Maxine and Doug also came along to surprise Chris with the SMOTY trophy. A happyier and more humble winner you couldn't find

XBOSS has been universally well received and has already picked up People’s Choice at the WA Hot Rod Show; the SMOTY win confirms people love it.

It’s really satisfying to know that the car is liked by a lot of people. While the car was built to my style, my design, what I wanted, it’s good to know that other people like it.

Looking back on the time since the Detroit Autorama, what things stand out to you?

Since we’ve been back, I certainly have enjoyed the break from the car and sort of wondering how I actually found time to build it. The reaction that the car has got has been overwhelming; the Today Tonight story is still getting hundreds and hundreds of hits. It’s just insane, the level of interest in the car. 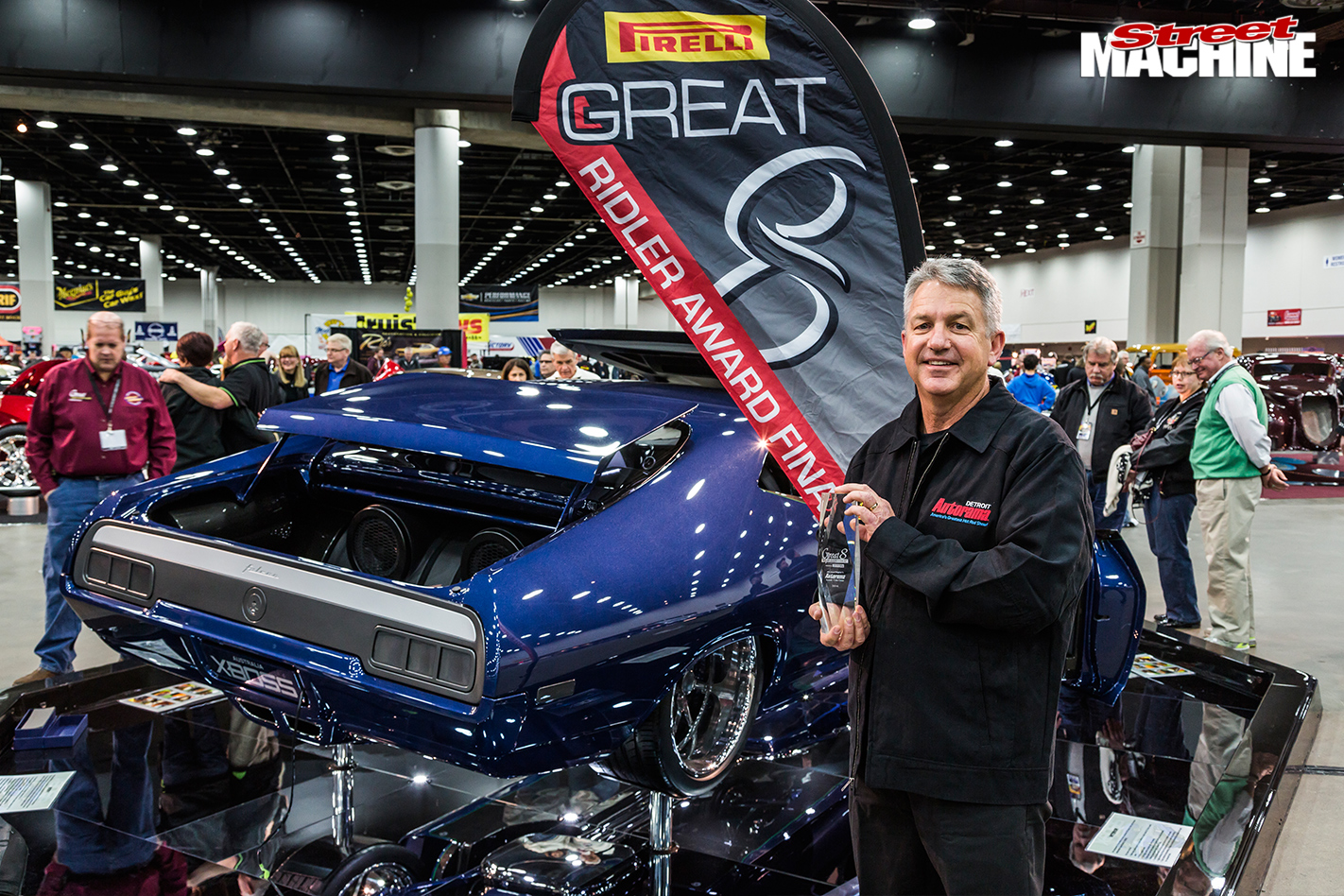 As you can see from the previous SMOTY winners, it’s really a who’s who of street machining in Australia. How’s it feel to have your name alongside them?

A lot of those people are my inspiration for building cars. To have my name on the same list as them is something that makes the hairs on the back of my neck stand up. It’s really, really cool.

What’s next for XBOSS?

We’ll be going to Adelaide for the Extreme Auto Expo [25-26 November] and then on to Summernats, the Victorian Hot Rod Show and then Tassie. I’m really looking forward to getting to Summernats and showing the vehicle there.

Was there ever a time during the build that you thought about chucking it in?

It would have been so easy to chuck it in, so many times. There were at least three or four occasions through the build where I’d poured so much into it yet I still had to spend more on the car than the car would be worth. I went through that a number of times. 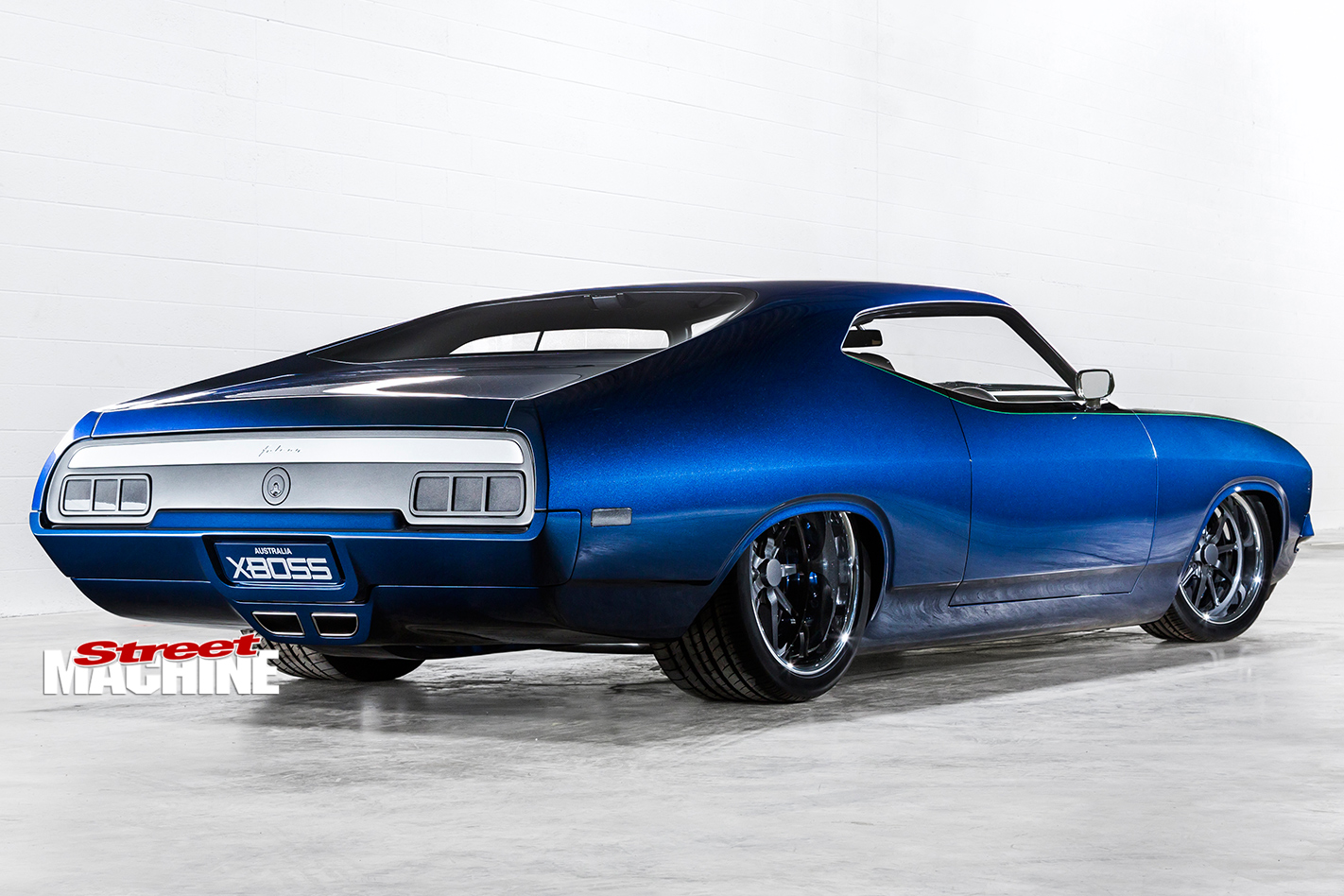 Is that the businessman coming out?

That’s the reality of it. I understand now why. I see people build cars and they budget them poorly because they don’t realise the cost of finishing a car properly. It’s not just the monetary cost; it’s the physical and emotional cost. You spend hours and hours and hours making a part that you think is perfect, then you go to bolt it on and it’s not quite perfect or the gap’s not right. So you’ve got to pull it off and start again.

That’s probably the key thing with the car; it’s taken an enormous amount of discipline. You can’t say: “That’ll do.” If I had’ve said that, the car would have been finished three years ago [laughs]. 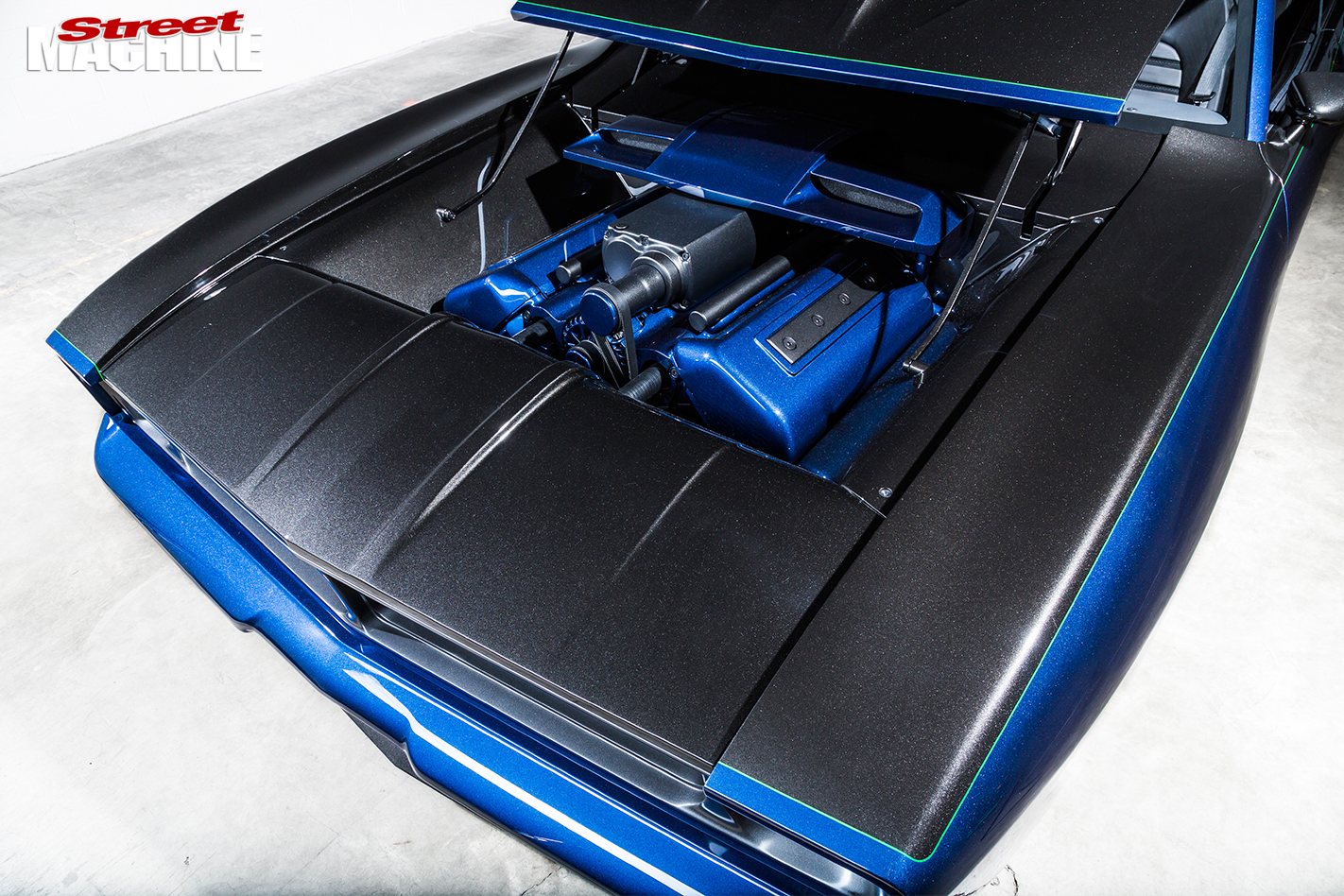 There have been a few knockers. Have you suffered from tall poppy syndrome?

What I do get sick of is the lack of understanding about what the car is – not just my car, but show cars in general. Show cars are designed to be shown for a period of time, then once you finish showing it, you get out and use it. The amount of people that comment: “It doesn’t get driven.” That doesn’t take away from the fact that it’s designed to be driven and it can be driven.

With any top show car you only get one opportunity for the car to look pristine, and as soon as you start driving it, you lose that and they do deteriorate quickly. Unfortunately, a lot do get put away and don’t get seen, but that’s not the intention with XBOSS.

It’s never going to be a car you drive across the country in; it’s a Sunday cruiser car, like a lot of street machines out there.

The 99 per cent of good comments outweigh the one per cent of knockers. There has been a bit of the tall poppy thing, but that was one thing I didn’t see in America. Americans were overwhelmingly positive about it, more so than the Aussies. 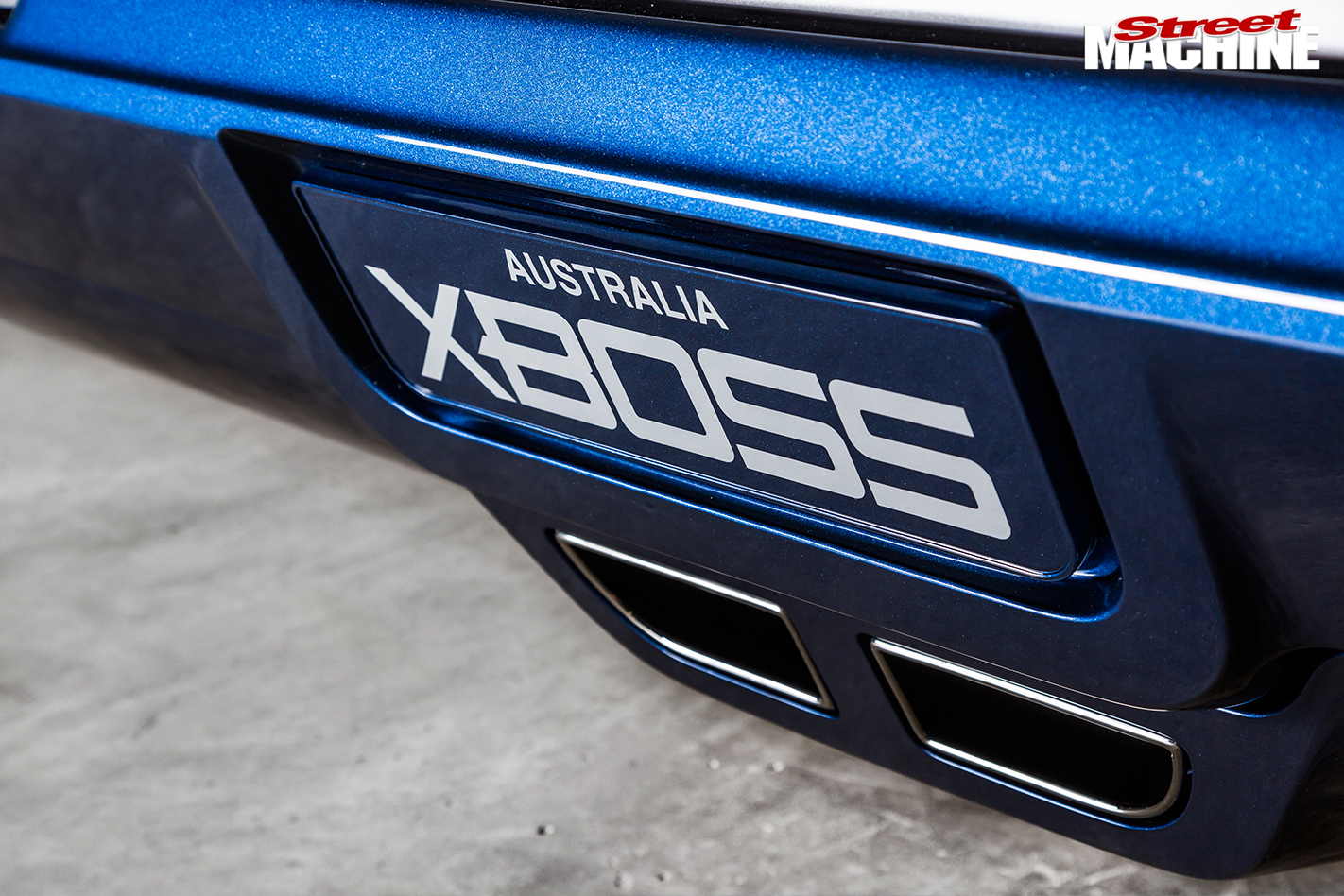 Is there anything you’d do different?

No, it’s exactly the car I wanted and regardless of what awards and accolades it does or doesn’t get, I’m happy to have it parked in my garage. 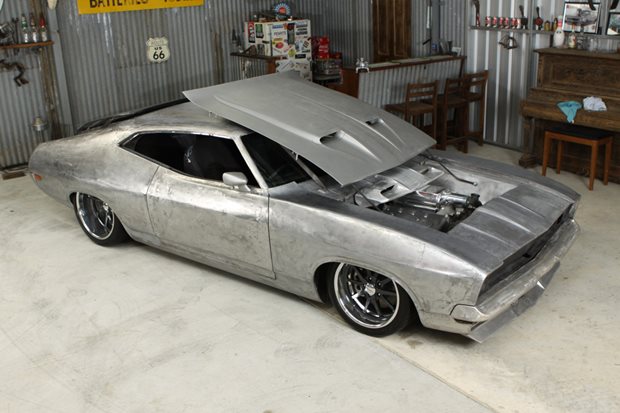 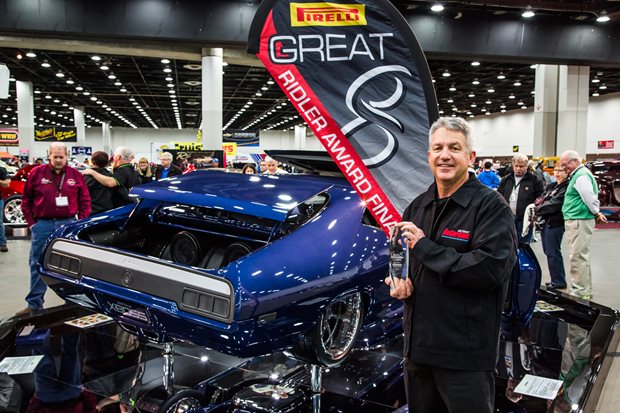 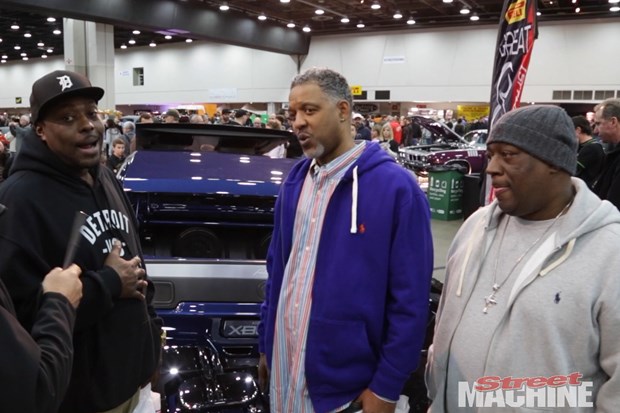 The Yanks may have stopped making Ford Falcons in 1970, but they sure took a shine to XBOSS