Young gun Josh Jardine fires up a Model A roadster

This article on Josh's roadster was originally published in issue no.18 of the Street Machine Hot Rod magazine

CURVEBALLS aimed at project cars can be dangerous. They possess the power to inspire a better build, or destroy it completely. They come in all manner of nut-cracking strengths, and if one is thrown your way you have two choices: either own it and smash it out of the ballpark, or hurl your bat in frustration and admit defeat. 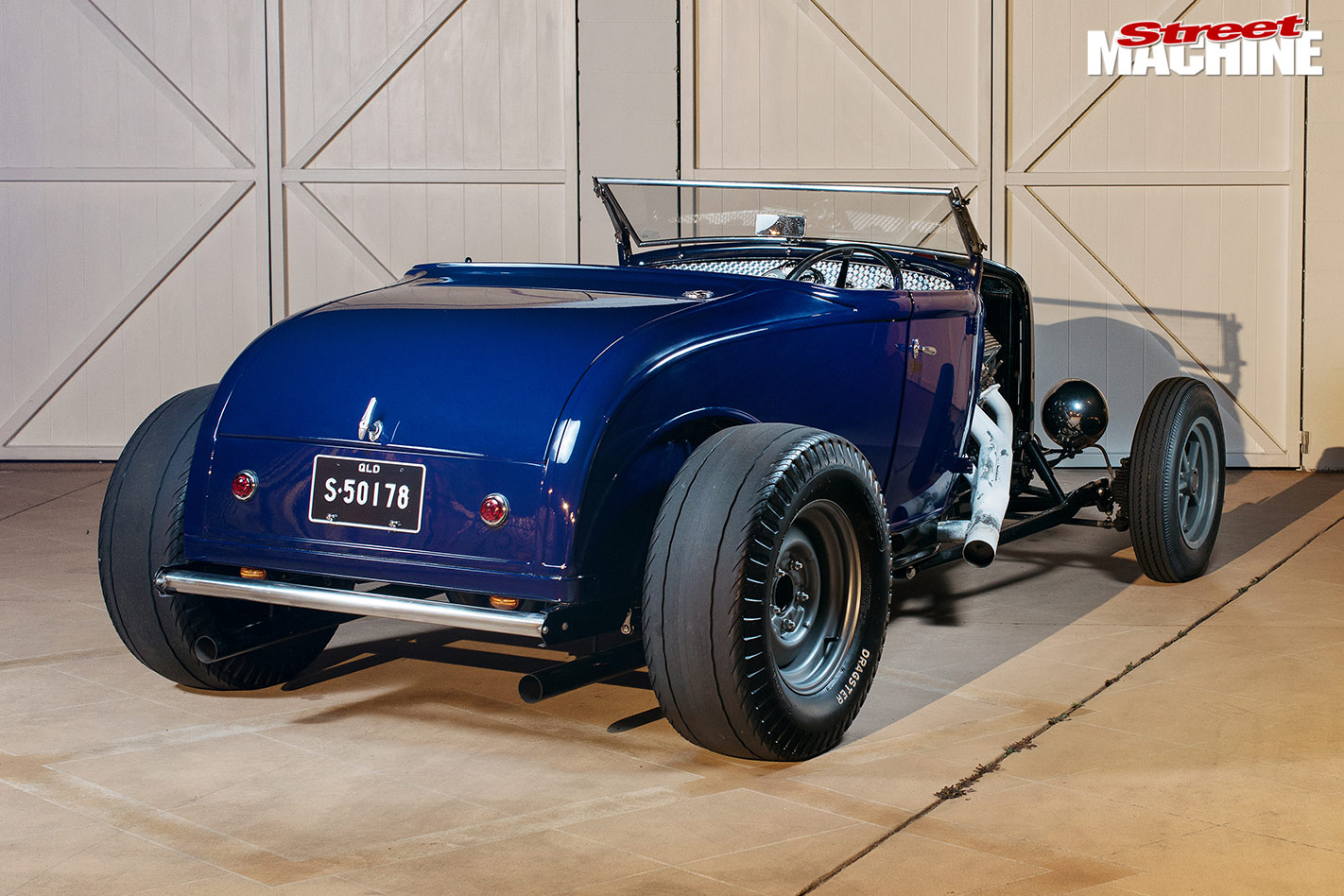 Thankfully, 23-year-old Queenslander Josh Jardine chose the former, and when the talented young special-effects artist realised the curveball of a flathead rebuild wasn’t in the realms of his budget or timeframe, he reassessed the plan for his ’30 A roadster.

“I was keen to build a traditional post-war roadster, y’know, channeled over the frame running flathead power and juice brakes,” Josh explains. “I’d been collecting parts since I was 17 and had the chassis pretty much mapped out and to rolling stage with a sidevalve donk, ’46 front end and banjo diff that retained their early wheels and drums.” 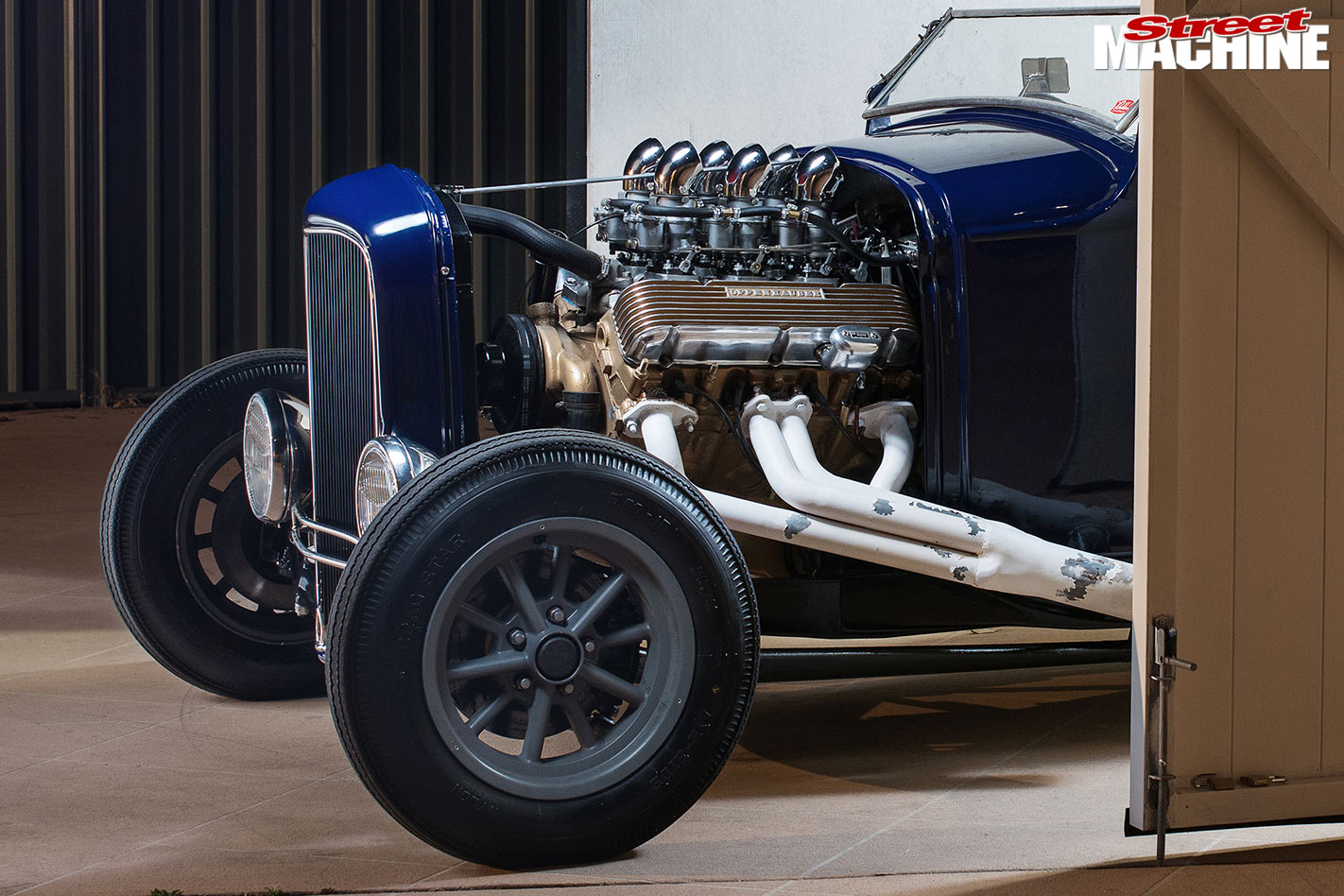 The project was parked up in 2013 for a two-year hiatus while Josh focused on his tertiary studies. In early 2015, Josh was ready to get back in the game, and the rolling chassis was rolled out again.

“My girlfriend Chantelle and I decided to head to the States for a 12-month working holiday later that year, so I had six months to finish the build then sell it to help fund the trip. I took a leave of absence from work and started on the roadster full-time.” 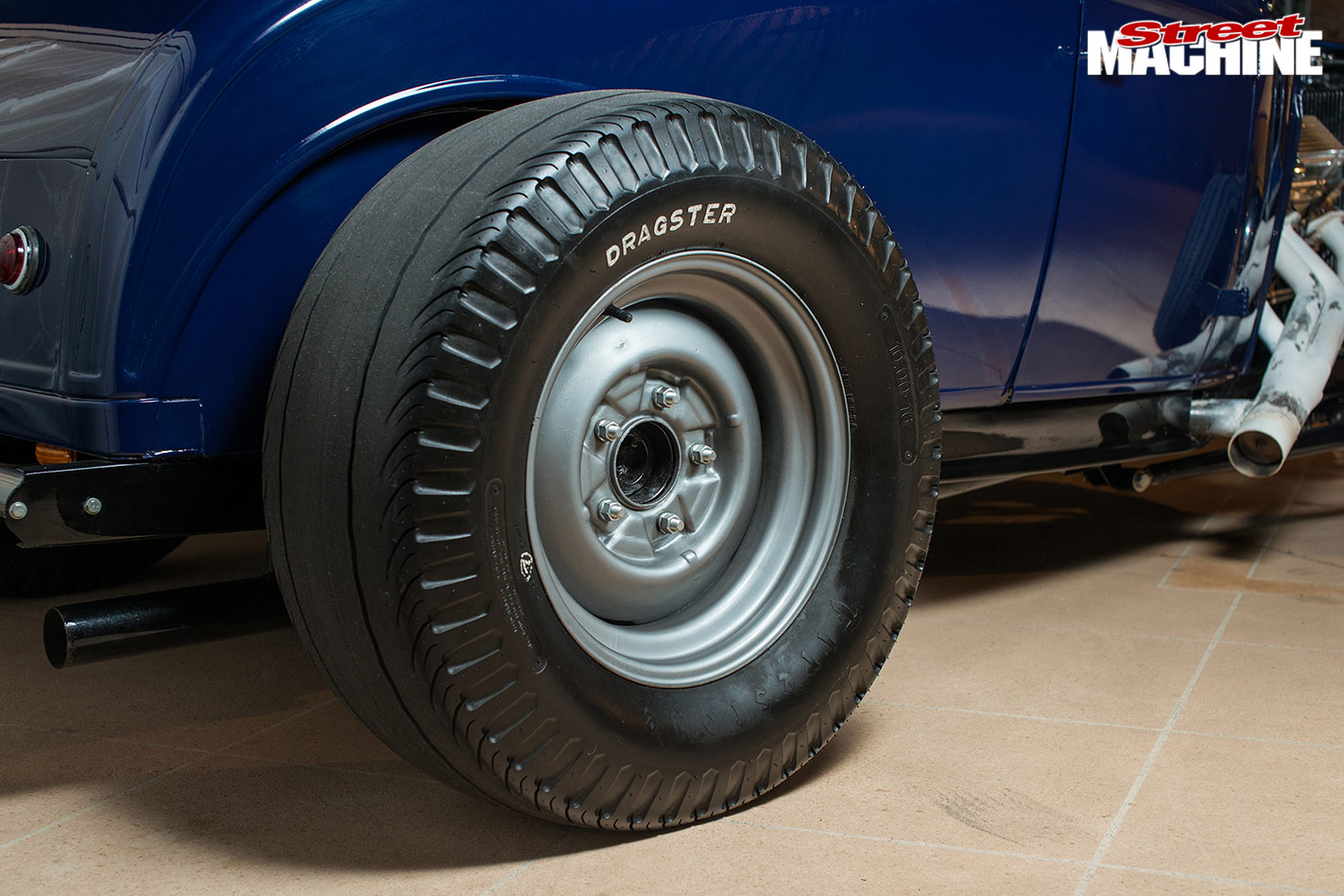 This would be a daunting task for many, let alone a then 20-year-old. But Josh has the good fortune to have grown up immersed in hot rodding and cool cars, and garner some impressive knowledge and skills along the way. His dad, AJ, and mum, Nicky, run Burleigh Roadsters on the Gold Coast and were on-hand to assist with his first build, a 1950 Chevy coupe ute that was reborn from a rusty paddock wreck into a super-cool tail-dragger in time for Josh to score his Ps.

“With a six-month deadline now on the cards and a pretty tight budget to consider, I took a step back and weighed up my options for the roadster,” Josh recalls. “A flathead rebuild was out of the question and I was wandering through the Lismore swap meet hoping to somehow fluke onto a good-running replacement when I spotted a 394-cube Oldsmobile donk for sale. I knew these Olds engines were a hot-ticket item for racers back in the early 60s, so figured I could reinvigorate the project around this motor.” 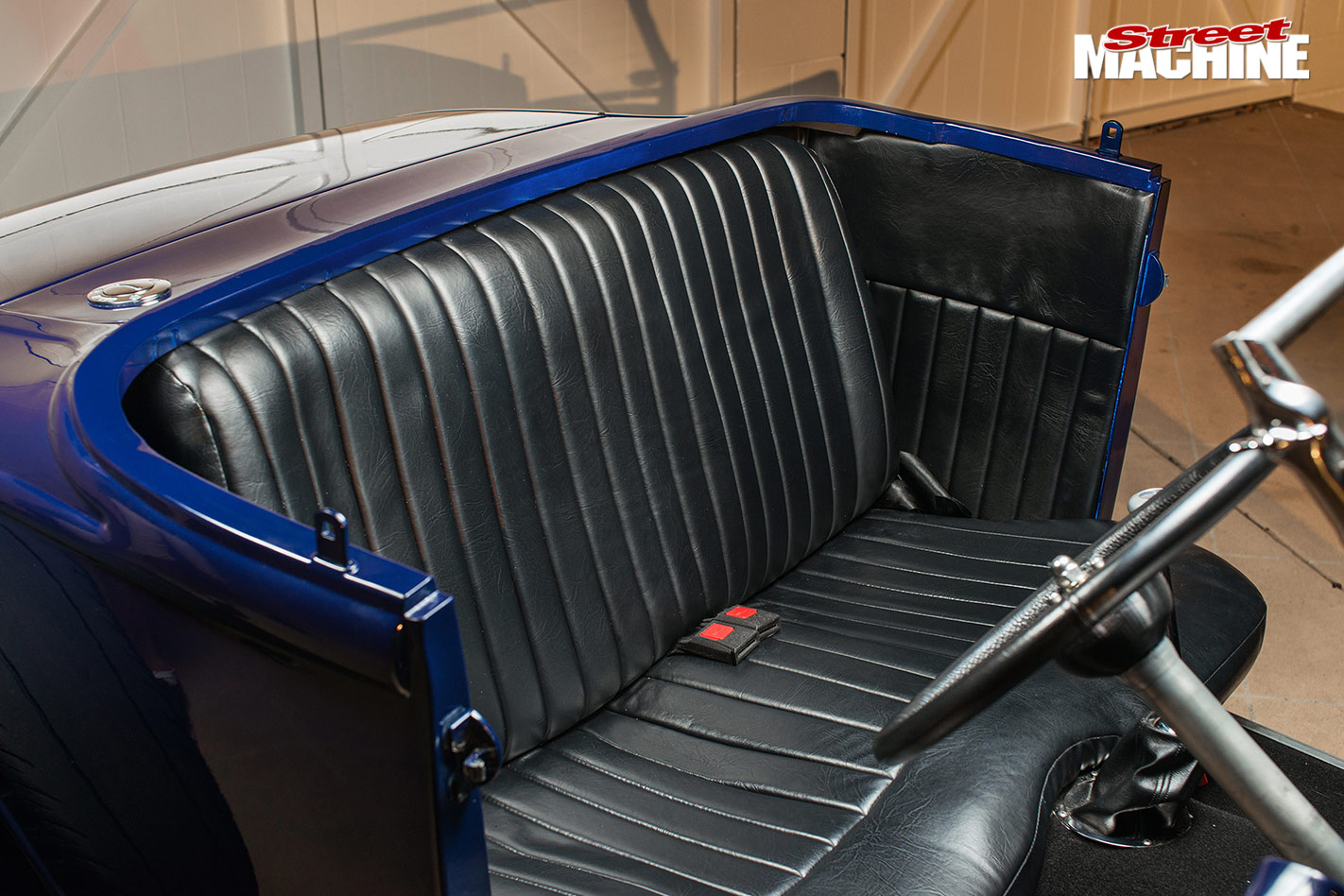 The ’62 vintage of this engine put paid to Josh’s plan to keep the componentry pre-war, but, not one to throw in the towel, he decided to build a tough 60s-style drag roadster instead. The existing Model A chassis was retained but modified to suit the roadster’s new look and stance, which involved pinching and bobbing the front section of the rails and kicking the rear up nine inches.

The stock-height ’46 front axle was kept, located by Toowoomba Rod & Custom Shop-modified split wishbones and a twin transverse leaf-spring arrangement, utilising one mounted fore and one aft of the axle. 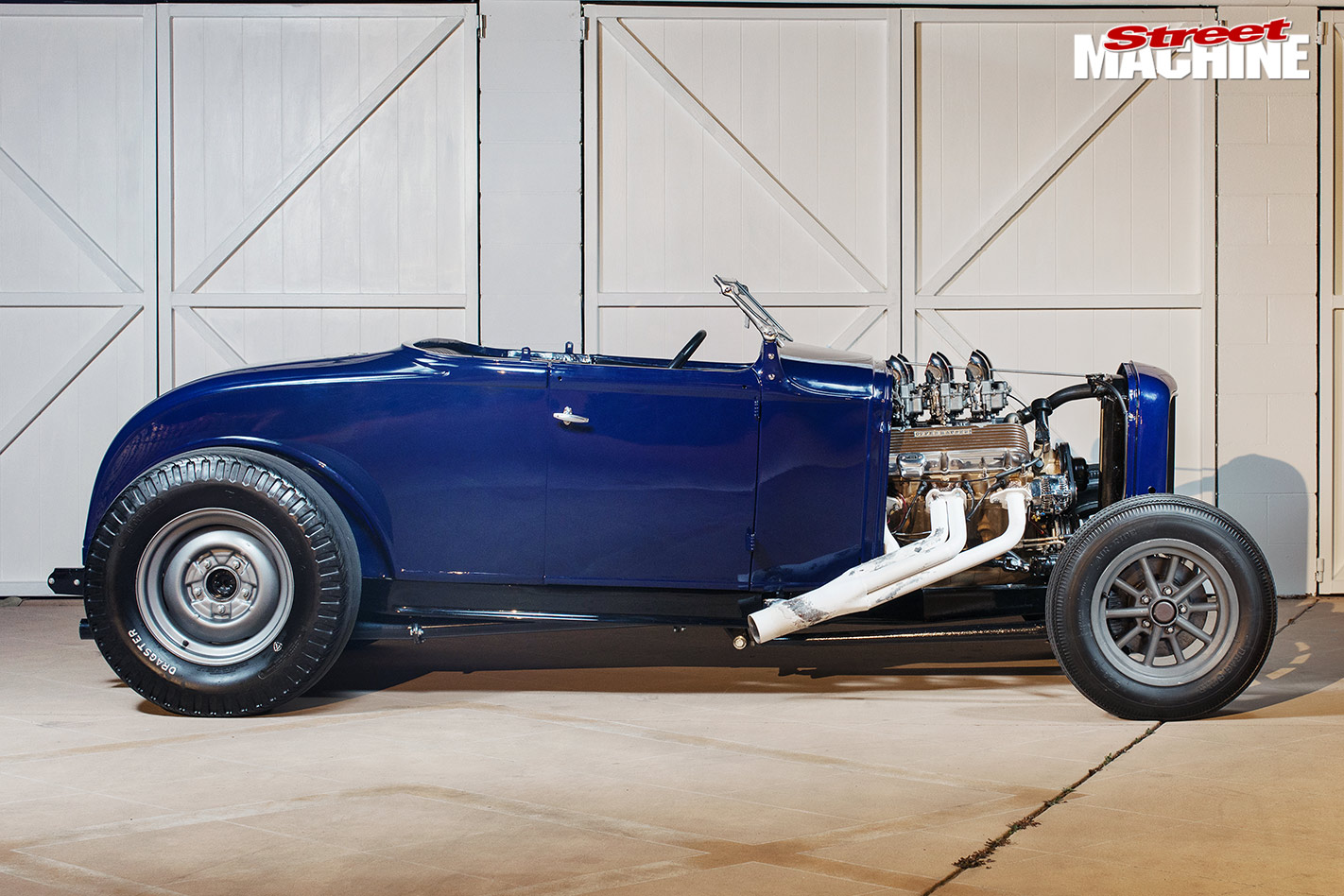 The owner-made pseudo-'32 frame covers disguise an original A chassis that was pinched and bobbed at the front, and kicked nine inches higher in the rear to attain that oh-so-perfect stance

The original early-girl banjo diff was rightly deemed insufficient to handle the Olds-inspired horsepower upgrade, so a Mustang 8.8-inch diff was swapped in and held in place via early Ford radius rods and a ’46 transverse leaf spring.

Ford Falcon disc brakes are activated by a Holden master cylinder, while So-Cal tubular shock absorbers dampen each of the corner assemblies. 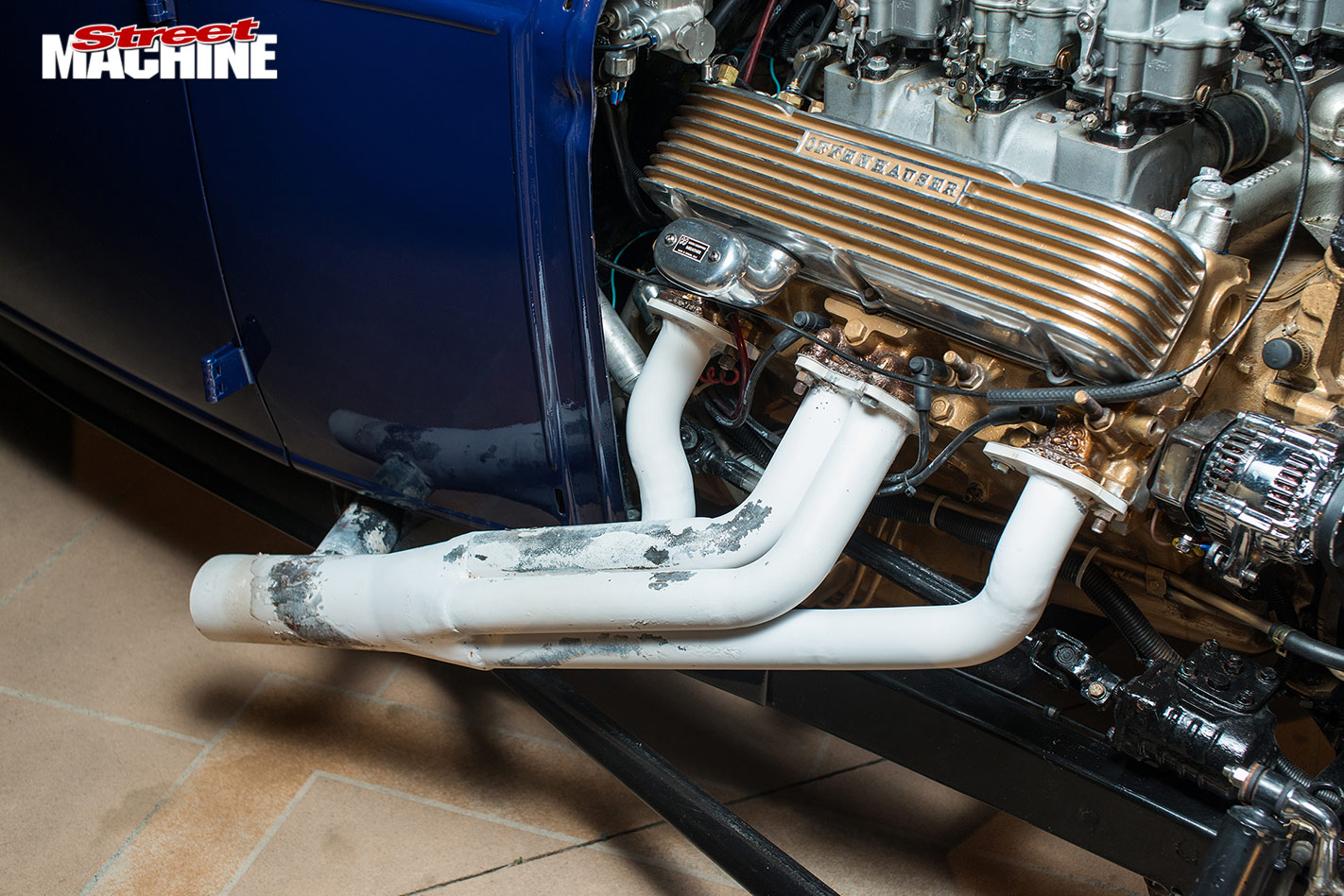 A Morris Minor column and Datsun steering box combo had already been modified for hot rod duties, and was another swap-meet find that found its way on board. Sixteen-inch Ford steelies in eight-inch widths were chosen for the rear, while the front rims are a clever application of the ol' ‘Ways And Means Act’ by special-effects man Josh.

“I love the proper magnesium-spoke rims from the 60s, but they aren’t legal and I didn’t have the coin to throw around on a real pair anyway,” he says. “I compromised by using a pair of Rocket 10-spokes that I gave a magnesium ‘look’ and weathered using techniques I’ve learnt in the film industry.” 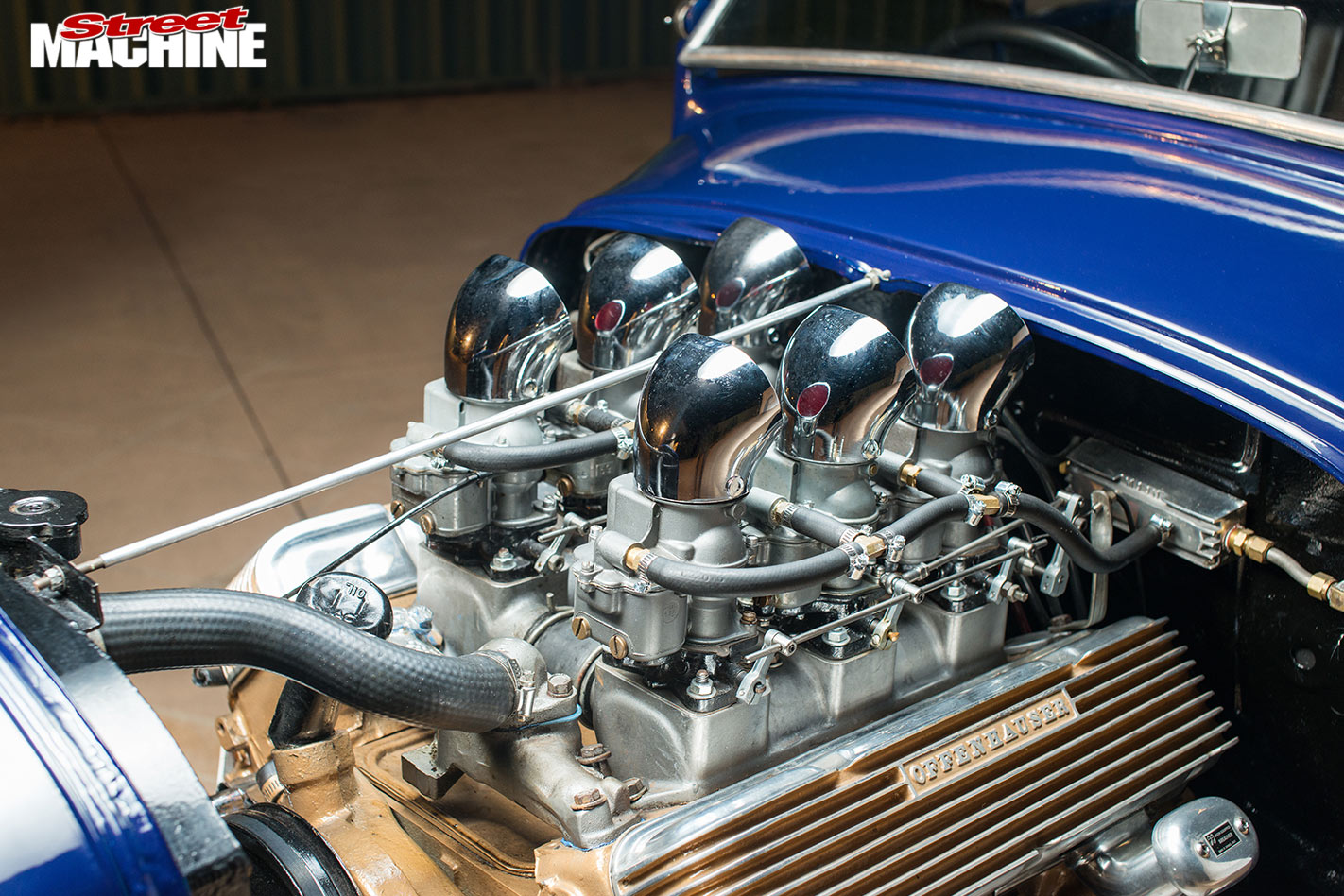 You have to admit, they look awesome, and do little, if anything, to detract from the period visuals of the car.

Firestone cheater slicks were chosen for the rear, while the pseudo mag spokers are wrapped in 5.6-inch-wide crossplies.

The Olds engine, originally plucked from a Starfire, was deemed fit for purpose as-bought, so was lavished in gold paint and topped with a new-old-stock six-pack intake and a set of finned Offenhauser valve covers. Josh plumbed the fuel system for the brace of Holley 94 carbs before cracking out a pair of scratch-built four-into-one straws to handle the exhaust action. 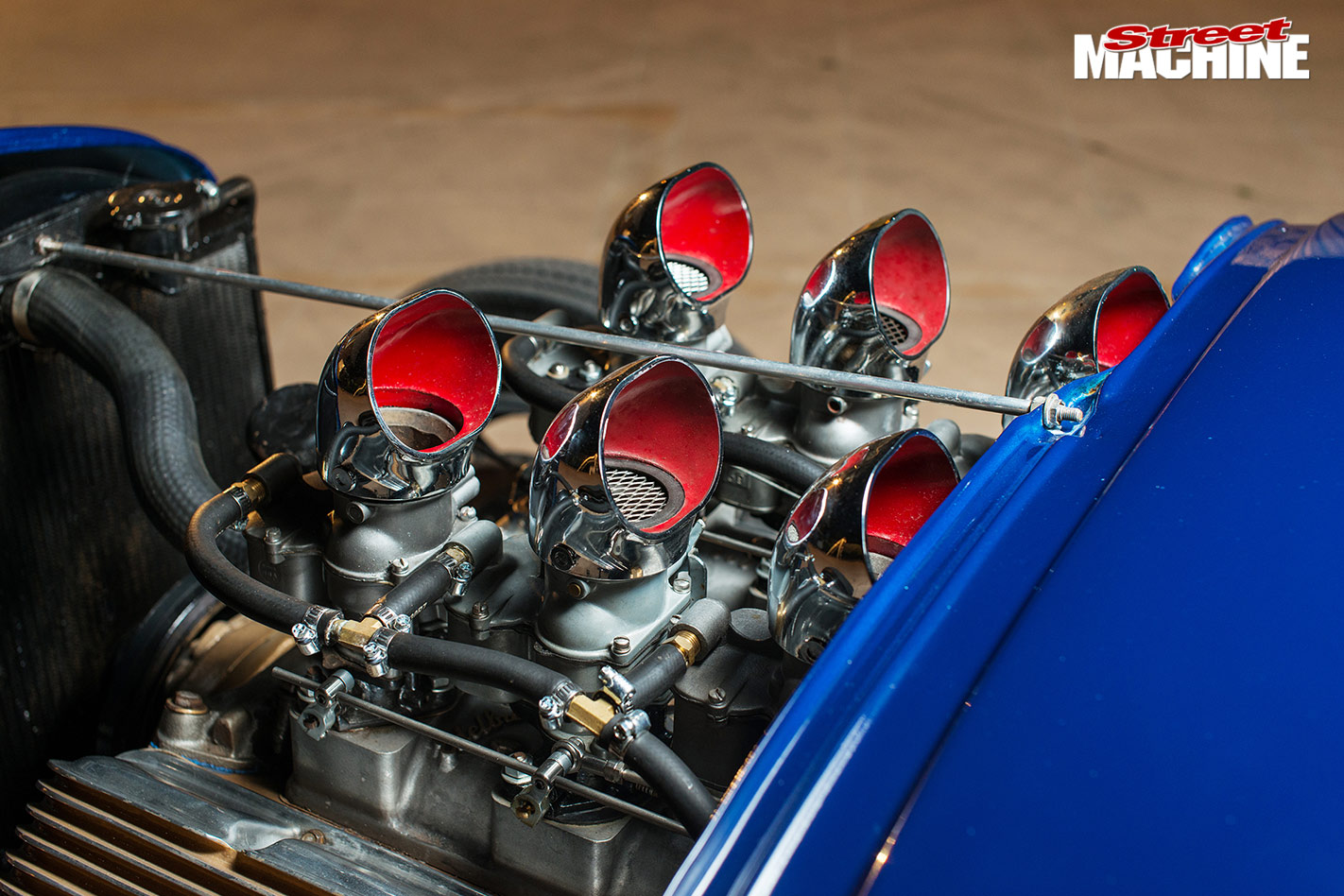 The Edelbrock 6x2 intake is topped with Holley 94 carbs, while the Offy finned alloy rocker covers are 1990s repro items that fit the bill perfectly

“I was shown the ropes by Dad for the first side then left to my own devices for the second,” he says. “I’m pretty happy with how they turned out and had them coated in white as a finishing touch.”

A Lokar-shifted Hydramatic transmission and custom-made tailshaft round out the remaining driveline componentry. 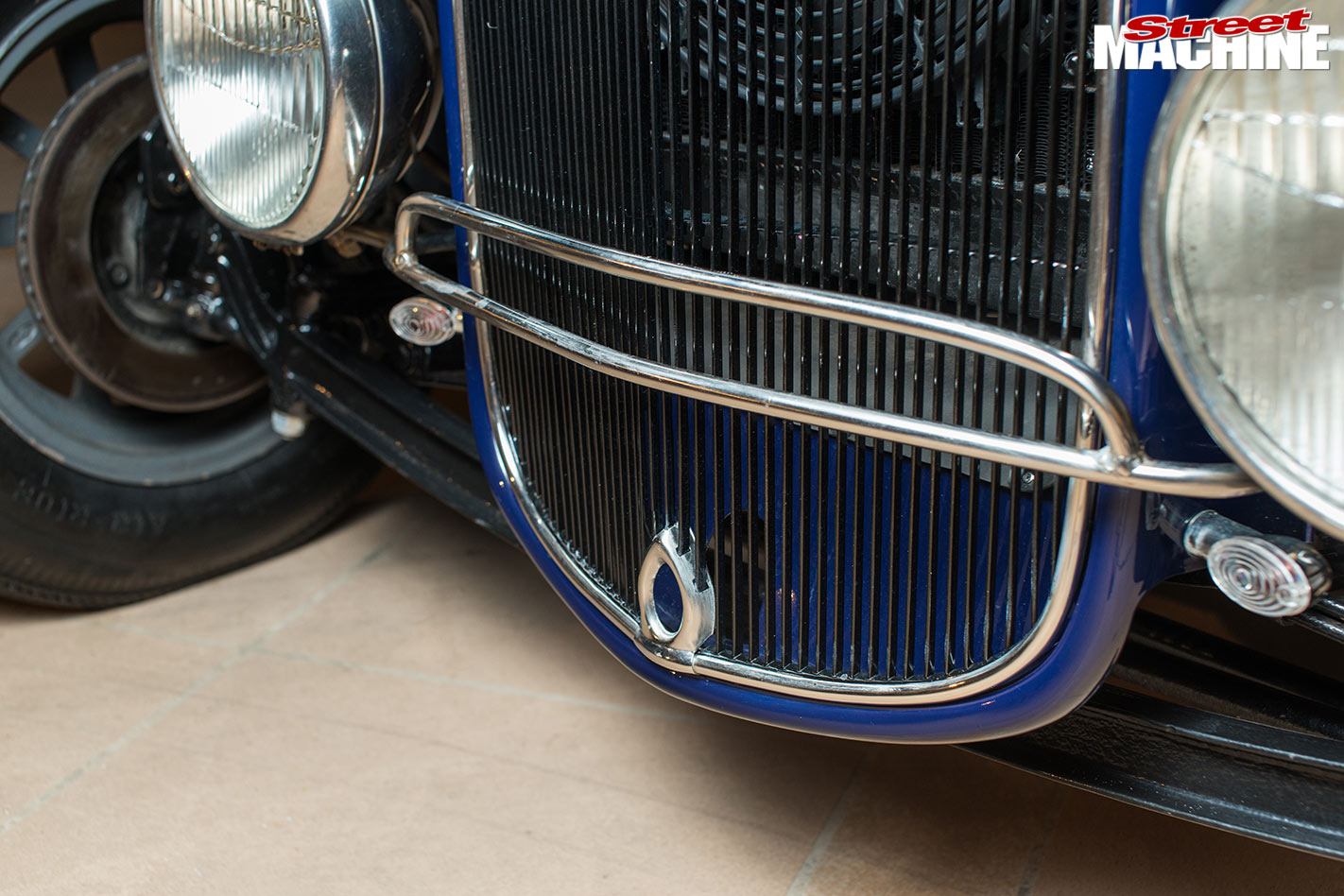 With the chassis and running gear buttoned up, Josh turned his attention to the body and interior. His folks were agents for Brookville all-steel reproduction bodies, so he didn’t have to travel far to purchase one. The ’30 roadster body was left stock, except for four inches lopped out of the raked screen, while the firewall was reversed and recessed nine inches. A deuce grille shell was peaked and filled before Josh whipped up a neat set of ’glass rail covers to give the early-A chassis a ’32 look. Josh’s good mate Matt Teece then laid down the timeless Medium Blue paint but in two-pack, which offers up the perfect balance of running a period colour with a hint of racy bling. 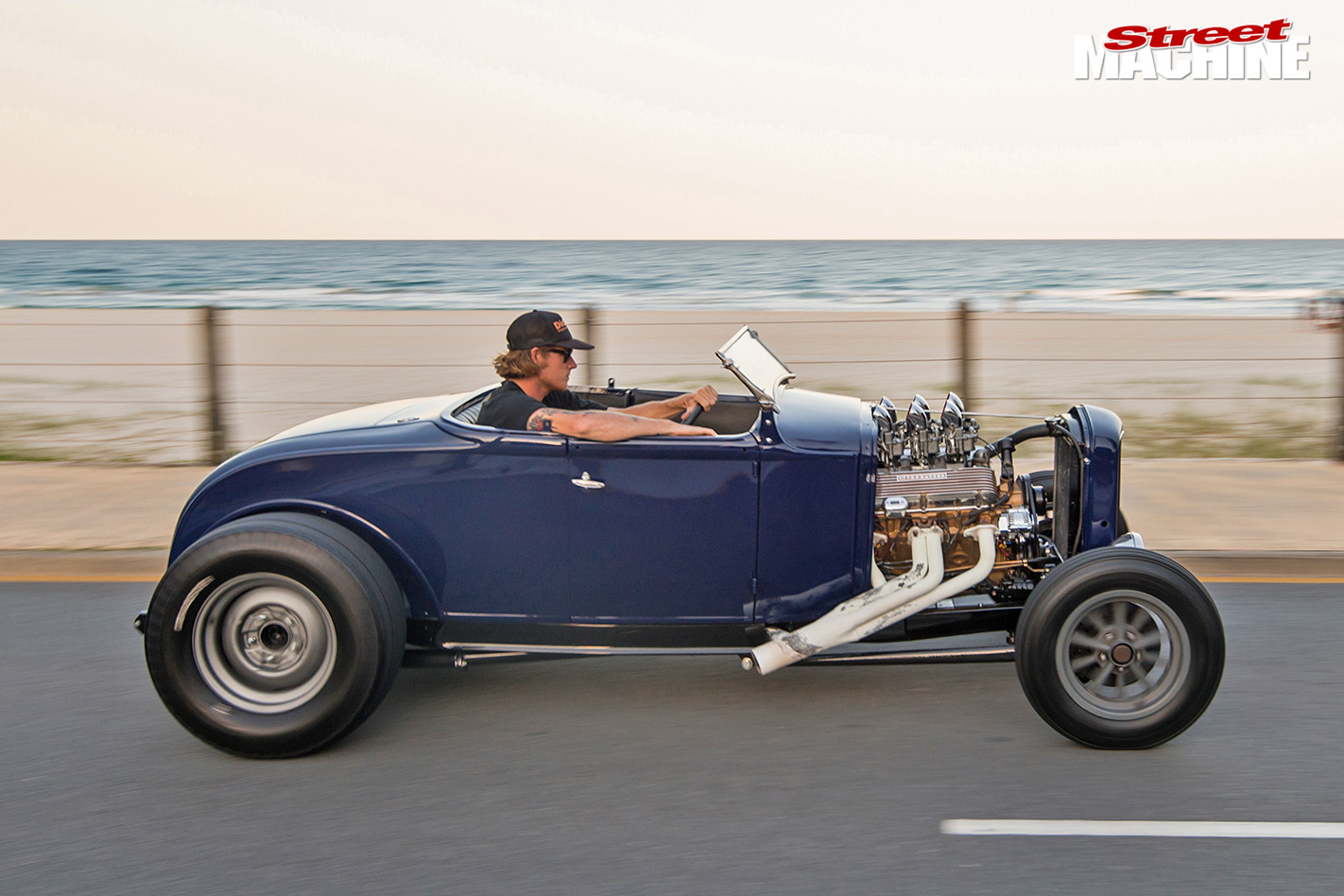 Josh and Matt laid down the subtle Medium Blue two-pack paint, which works in nicely with the low – yet strangely high – impact grey steel rims and cheater slicks

Josh and Matt joined forces again for the interior, with Josh hand-forming a recessed ’32-style dash that allows the Model A gauge panel to be used, and Matt swapping the spray gun for a sewing machine and retrimming a modified minivan bench seat in black tuck-and-roll vinyl. A host of Classic Instruments gauges and a LimeWorks twirler are modern-build old-school additions that help lock down the race-inspired identity for Josh’s ’30. 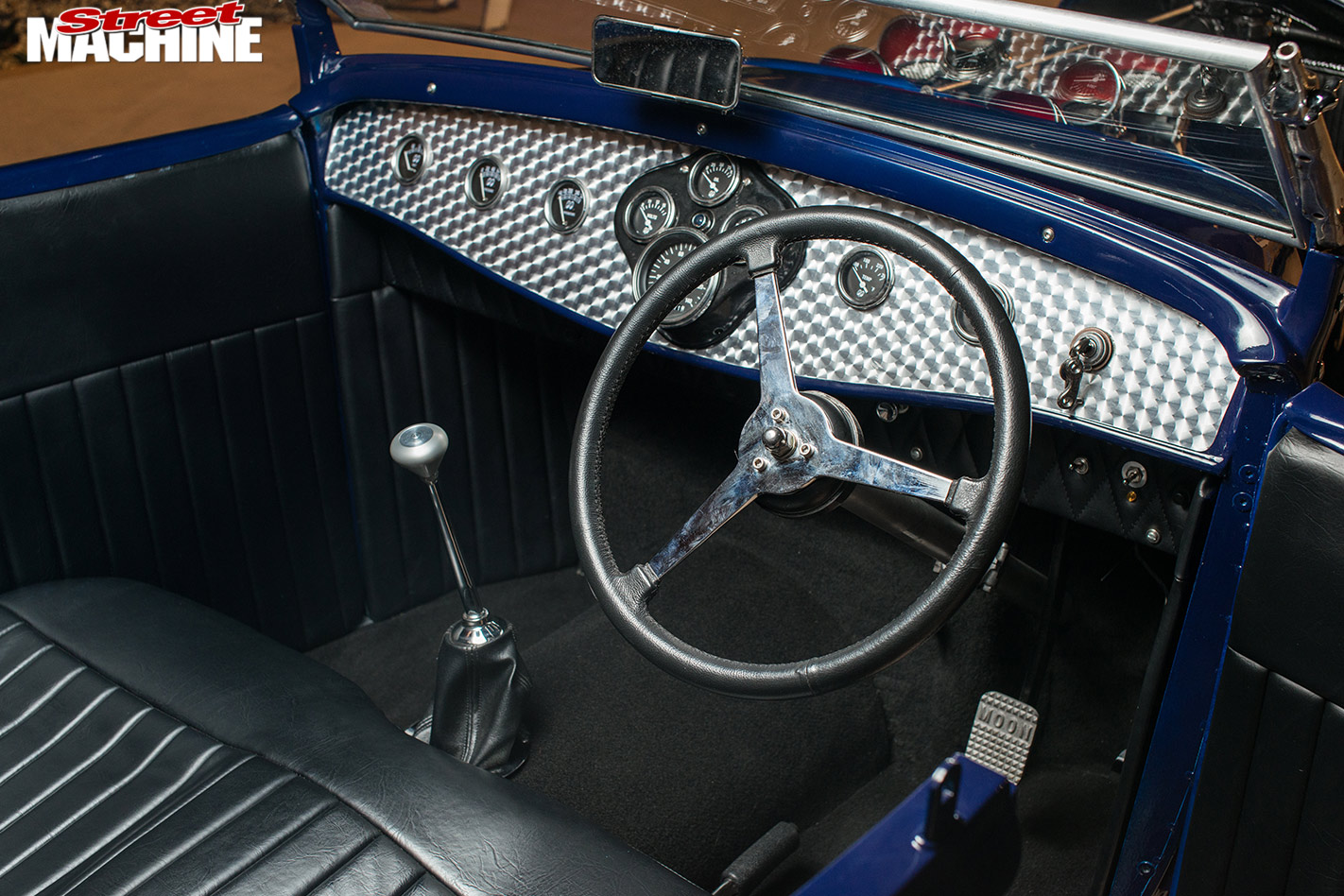 The A was registered just in time for the 2015 Yamba Rod Run and immediately advertised for sale. With only two weeks until Josh and Chantelle were due to depart for the States, they were cutting the chance of a sale very fine.

“I drove the wheels off it for those two weeks and it looked like it was destined for a year on jack stands,” Josh says. “In a crazy last-minute twist, it sold at 9pm the Thursday night before we flew out at 6am Friday morning, so it was all a blur. People ask if it was tough to sell but I never really thought about it. From the time we had America on the go, in my head, it was always for sale.” 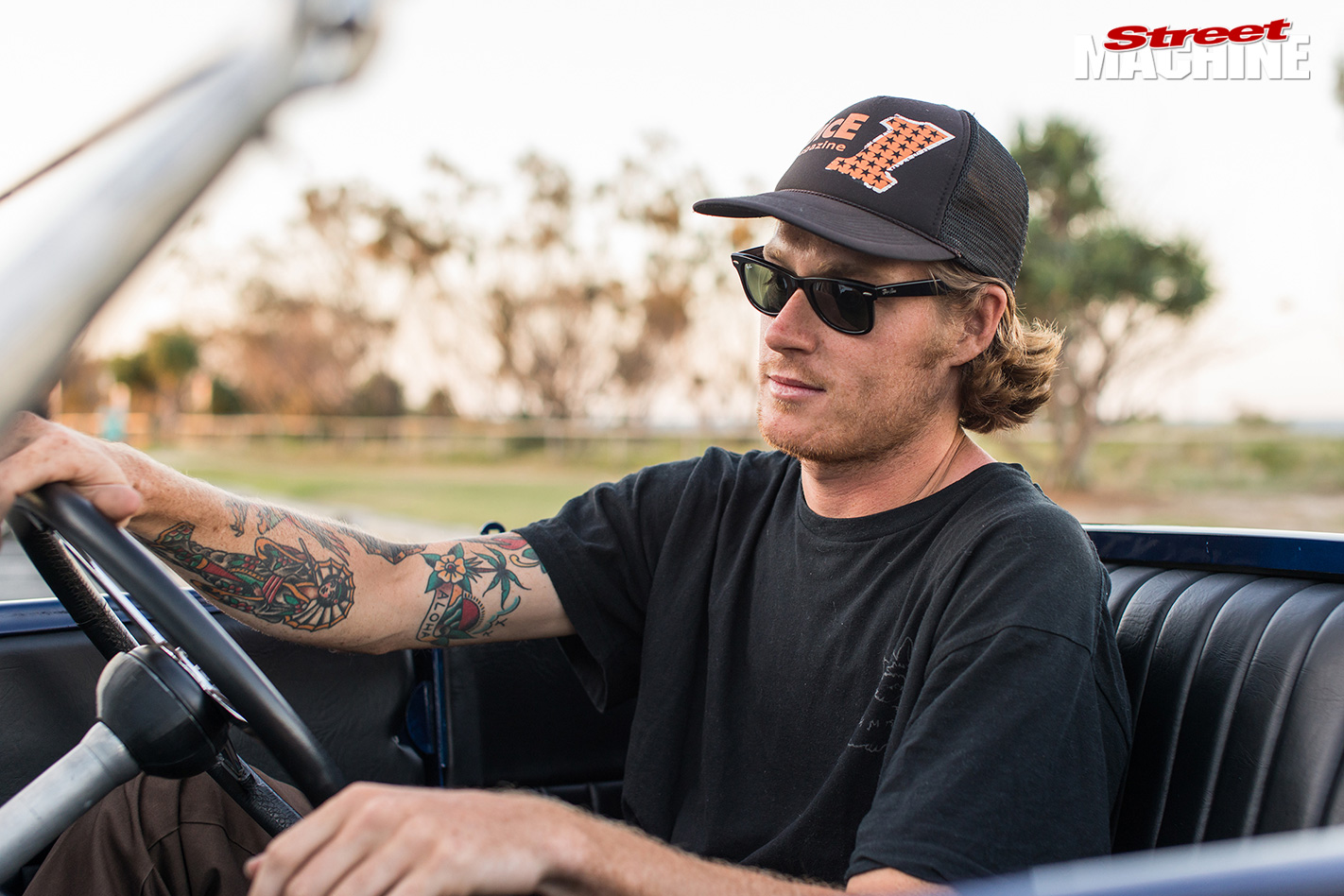 Two years on, and with the US trip done and dusted, Josh and Chantelle have comfortably settled back on the Gold Coast and still have the ’50 Chev for cruising and a handful of new projects in the works.

“I’ve been messing around with a couple of vintage panhead Harleys and in the back corner of the shed there is a little pile of ’32 stuff I’ve been putting away for a rainy day. I’m not sure when it will be started – let alone finished – but it’ll be a budget build, of course, so in the meantime I’ll keep scouring the swaps and internet for bargains. The thrill of the hunt is sometimes the best part about building a car!” 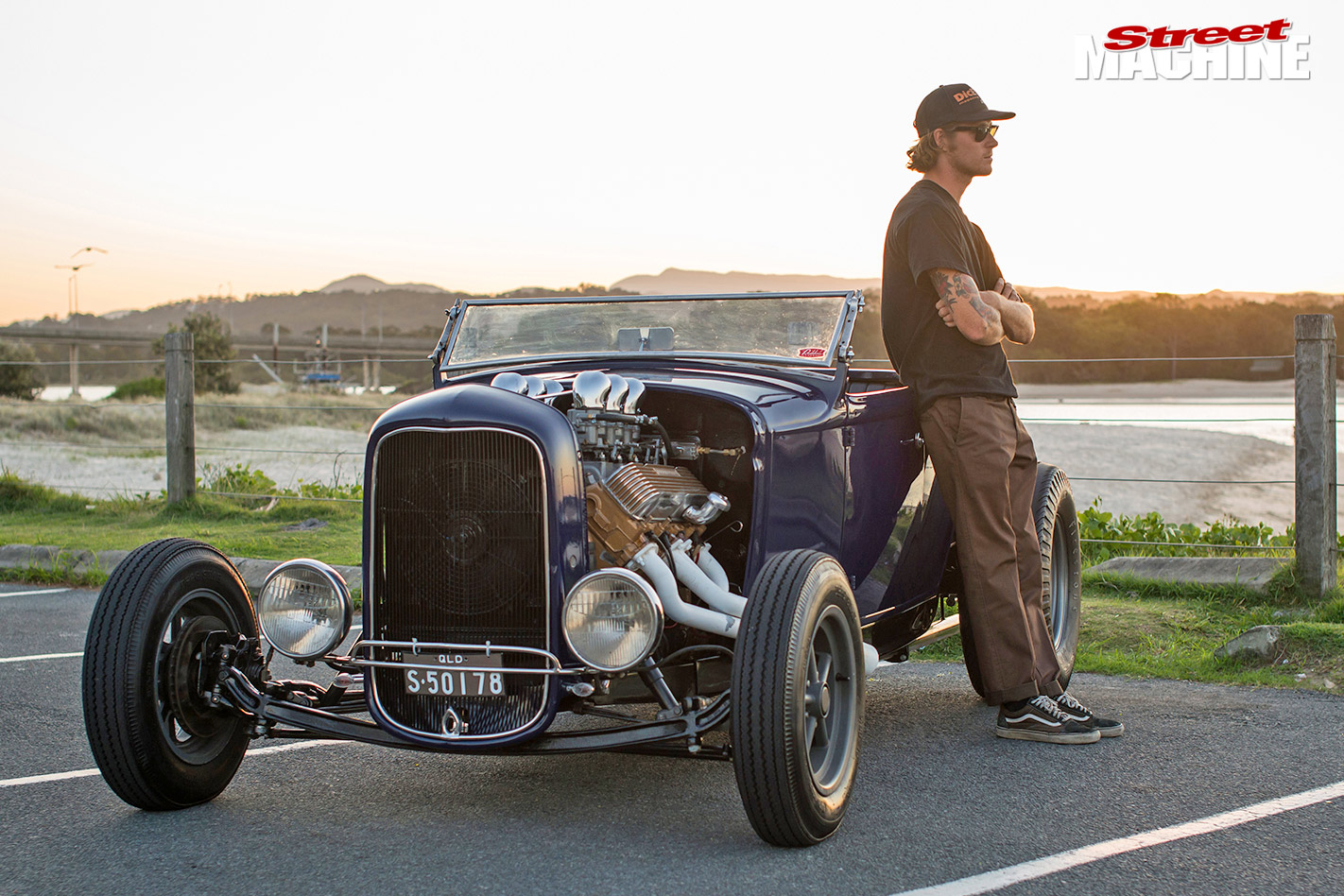