Single-digit quarter-mile street cars are the new black, and Jodie Guilfoyle wants in on the action with her 590hp Holden LX Torana hatch

JODIE Guilfoyle is a respected quarter-mile combatant, having run 10s in her VH SL/E. And as the saying goes, once you’ve had blacktop you’ll never go back – or something to that effect. So for Jodie, all her cars need to pass the rigours of drag racing, if only every so often.

Dave and Jodie modernised the Torry by adding the black-outs, including the bumpers drowned in two-pack. Dave’s Munro runs MRGM-8 plates, so it’s only fitting that Jodie has MSGMH-8!

“My first race was eight years ago in my VH at Calder,” she recalls. “I was hooked from then on! I didn’t want to go and get my timecard; I just wanted to line up again.”

"We added the venetian for a sleeper feel," Jodie says. "We love how they look in the back of a car. The Monaro has one too"

Her tubbed VH was a stout bit of kit too, powered by a 355ci stroker with a 3500rpm-stalled Trimatic and a tough-as-nails nine-inch. “Then in March 2016 a friend made an offer that was too good to turn down, so we sold it,” Jodie explains. “Even though I enjoyed the SL/E every time I was in it, I still had that itch for an old-school classic,” she says.

A long-time hankering for an un-flared Torry hatch was satisfied a few months later, when Jodie and husband Dave’s mate Ian purchased this LX, before quickly realising that it didn’t suit his young family. So Jodie snaffled it up.

Ian had in turn bought the car from a bloke called Bronco, who’d given the Torry its SS Papaya hue and a bulkload of underbody mods. Inheriting a car that someone else has already properly slogged on can be a massive bonus. For Jodie this meant scoring a seriously tough set-up, including some chassis boxing and connectors, stomper 15-inch wheel tubs, a freshly fabricated trans tunnel and rear floorpan, suspension mods and a fuel cell.

“Bronco had done a great job, so all it needed was to be personalised as my car,” Jodie says. To start with, Dave and Jodie replaced the early-90s-era silver accents with classic black, then swapped out the satin Center Lines for modern and ultra-tough black Weld AlumaStar 2.0s. “It was instantly the look I had wanted,” she smiles.

With the Torry looking the business, Jodie began cruisin’ the wheels off it. Yet it became quickly apparent to this 10-second warrior that she needed more. “The mild 350ci and baby stall drove me nuts,” she says. “It was way too slow for how the car now looked and it was nothing like the power of my SL/E.”

A relaxing day out with the car proved to be the proverbial straw that broke the camel’s back. “I was cruising in the Torry, with Dave in his VL Calais and our mates in their XW. We headed off along the freeway, and I could see them disappearing in the distance; they left me for dead! After we returned home I told Dave that I needed a new motor.”

This wasn’t a surprise to Dave; he’d picked the lack of horsepower as a hurdle early on. After the pair had conferred over potential powerplants, Jodie decided to keep with an old-school feel over an LS upgrade and reckoned that a carby-fed Bowtie should remain up front.

With a proven 590hp at the crank, Jodie’s hoping the Race Comp Motorsports-built 406ci will get her down the quarter within 9sec

“A few weeks later I watched Wayne Cartledge run a 10.6-second quarter with a motor that he was selling,” she explains. “As the timeboard flashed the results, I turned to Dave and said: ‘That’s the motor we’re buying.’”

Wayne was already on the pair’s radar, having previously done work for them through his business Race Comp Motorsports. A phone call was made later that night and the 406ci Chev was soon in their hot little hands.

The stroked small-block is topped with a Quick Fuel Ultra 850 carb on a two-inch billet spacer, bolted to a Holley Strip Dominator manifold. Below, Wayne has modified the 23-degree heads and custom-ground the bumpstick. Pistons are JE forged items pinned to Scat H-beam rods and crank. An MSD 6AL with two-step, dizzy and leads ignite the PULP, fed forward from the fuel cell by a MagnaFuel ProTuner pump. Spent gasses shoot through HPC-coated tri-Y extractors to a pair of 2¾-inch pipes fitted with Magnaflow mufflers. An Aussie Desert Cooler radiator with a couple of 12-inch fans sets about chilling the 590hp Chevy.

It’s at this point I reckon we should properly introduce – or rather, reintroduce – Dave. See, Dave has a Purr-Pull Monaro that graced the cover of the December 2015 Street Machine. He was also a 2016 SMOTY contender, and he and Jodie run DJ Automotive & Towing. So to say that Dave knows his way around bloody tough and crazy-shiny streeters is putting it mildly.

Inside is mostly SS factory-fitment, with tweaks including a few key Auto Meter gauges, TCI Outlaw shifter, a tunes-pumpkin Alpine stereo and a rear venetian

“Dave’s also a bit of a machine when it comes to getting things done,” Jodie says. “He knows I wanted to get out in the car while the weather was good. So he put everything else aside to get it sorted.”

That’s not to say Jodie sat on her hands. “I’d often head out to the shed after work and on weekends to lend a hand.”

With the 350ci yanked and on-sold, Dave further tidied the already clean bay and prepped it for the larger and thirstier fitment. Above, the bonnet gained some breathing room with the addition of a four-inch Alfa Motorsport Fibreglass reverse-cowl scoop. Further down the line, the TH350 copped a going over with Raybestos clutches and deep pan, while a beefier tailshaft was also slotted in. A trusty nine-inch with a decent centre was already hooked up, so they added 4.11s and a Truetrac.

When I asked Jodie if the process took a few months, she scoffed. “A couple of weeks later it was going again!” she laughs. “My car dreams have come true; I finally have a pro street-looking hatchback with an engine combo to match.”

Not wanting to disappoint Dave given his ultra-quick build timeline, Jodie did as promised and cruised whenever Victoria had sunny weather on offer.

But it’s the strip that’s been playing on her mind. “I’m keen to bolt on my 315 radials and get down the track,” she enthuses. “We’ve tried to take it to Calder but the past few meets have been cancelled due to rain.”

Jodie will likely have had the car back at Calder for another pass by the time you read this. And with a proven 10.6-second pass out of the donk, Jodie and Dave reckon low 10s, and hopefully nitrous-assisted high nines, are in order. “After I’ve run a low 10 we’ll start thinking of fitting a rollcage and other safety things for ANDRA tech,” she says.

We can’t wait to see what this formidable Torry can do! 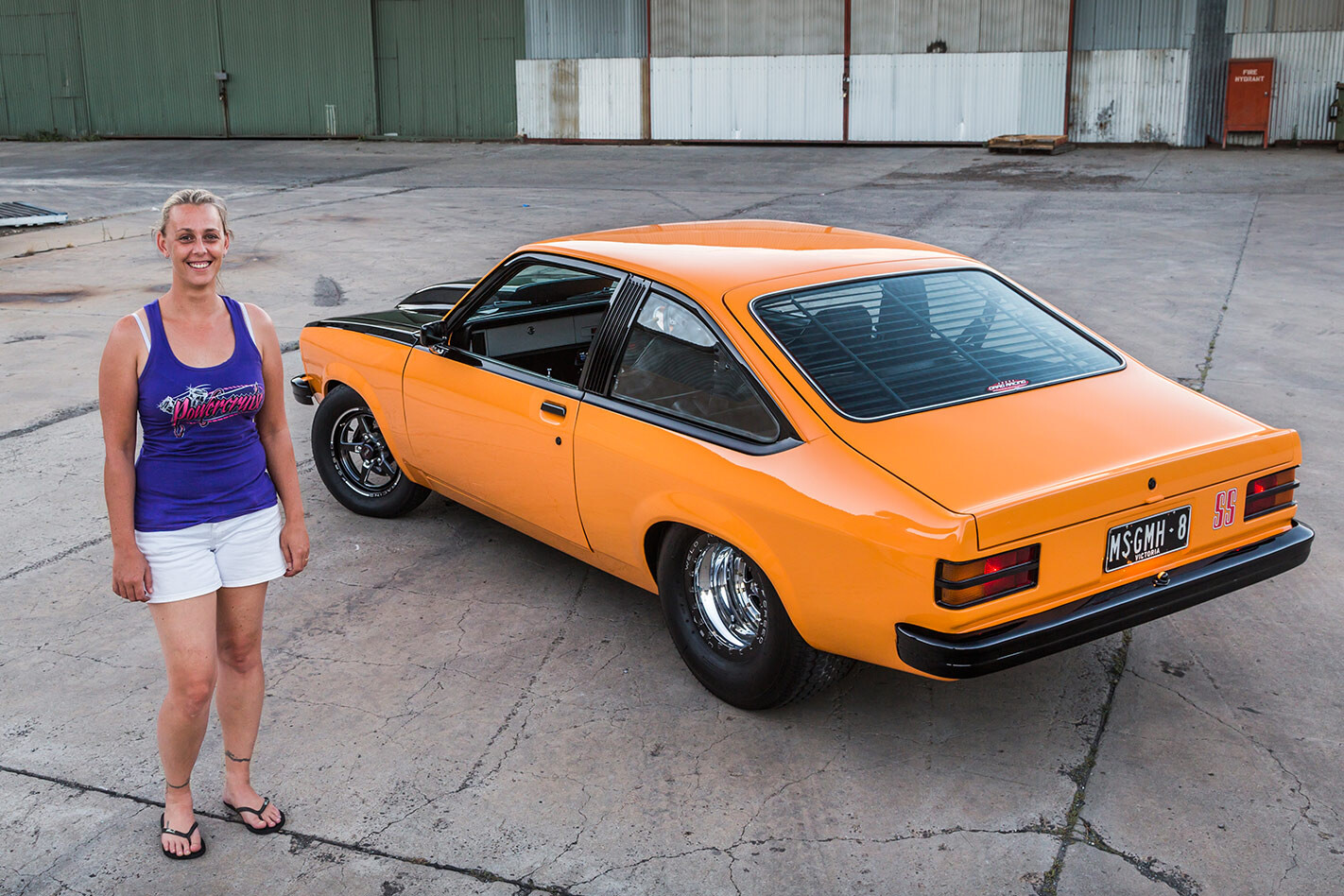