SOMETIMES, it takes time away from the people and things you love to realise their importance. I’m sure many of you can relate to that feeling during this period of self-isolation, and it got me thinking about the fact that most of the significant relationships and experiences in my own life have had one common denominator: modified cars.

I remember how it all started. I was the second-youngest child in a family of five boys and one girl in Brighton, South Australia. My older brothers were into cars, so a big part of my childhood was spent messing around with them in the back shed. My eldest brother modified an FJ to quite a good standard, and the second-eldest was a mechanic, so he always had me handing him tools and doing minor jobs.

We were pretty much a Holden family. All my brothers started with FJs, but coming later in the family order meant that my first car was a later model: an EH. My brothers encouraged me to find a Standard sedan, as they already came without side trims, which saved having to remove them and weld up the holes. So I instantly looked cool in my shaved EH, and it soon had six-inch-wide wheels, a floor shift and some engine mods. My younger brother and I went to the very first Street Rod Nationals in Narrandera in that car, and that’s where my love of hot rodding began – it was awesome there! 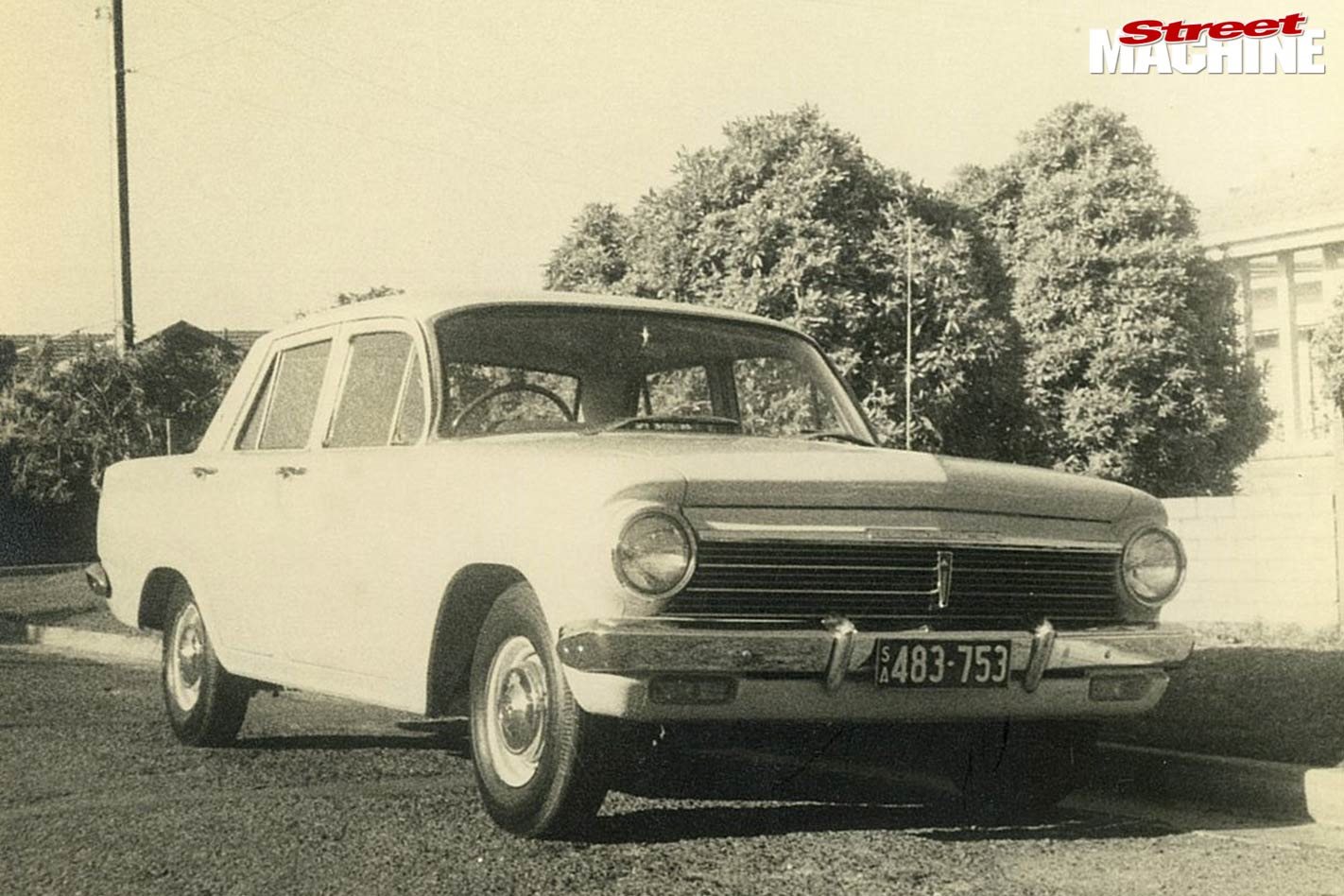 After my older brothers got married and moved out, the back shed became my domain, and that’s when my younger brother and I decided we would build a hot rod. I was 19 and he was 17; we’d been reading plenty of hot rod books and we were ready. Off we went to Warnertown with a good mate in his Mk2 Zephyr, towing a car trailer to bring back our chosen raw material: a ’34 Chev sedan. All the Fords were gone, so that’s the best we thought we could do.

My younger brother and I spent so many hot summer days in that oven of a tin shed working on our project. We bought an HG Holden Premier and used all the running gear out of it. We were one of the first to use an Aussie Holden V8 and four-speed in a hot rod, and we were first to install rack-and-pinion steering on a Holden front end – which, being a student engineer by this stage, I developed myself using an Austin 1800 rack-and-pinion set-up.

Halfway through the build, my brother abandoned ship, saying it was too much work, so I was left to finish it on my own. It took three years of making mistakes, doing things twice and learning the trade of car building, but I finally got it done.

My first test-drive before registration was with my sister in the back seat – because I had only bolted one front seat in place in my rush to try it out! After that I started driving around the block, and then in ever-increasing circles, so that if anything went wrong I could walk home to get tools to fix it. 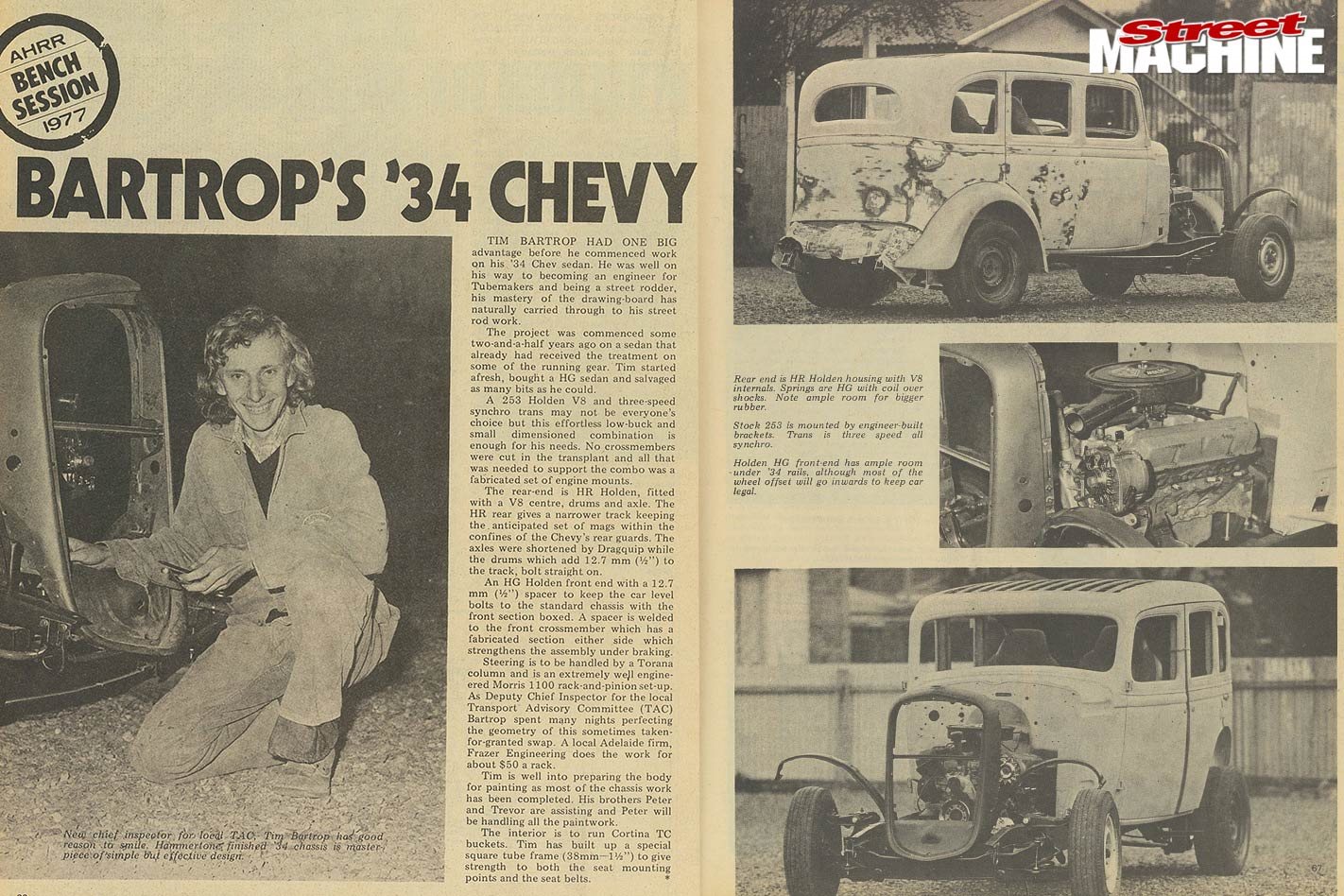 After plenty of ‘proving’ was completed, the Chev ended up being a super-reliable rod that I drove every day to work. It was a genuine 100mph machine, and back in those days, before roadside or mobile radar, we usually drove as fast as the car could go once we were out of the metro area. I remember driving from Adelaide across the Hay Plains in a convoy of cars heading to the Albury Street Rod Nationals, going 100mph all the way. They were great times.

But although I was brought up in hot rodding, I think that these days street machining has a fantastic energy and excitement about it. Back in the 70s, hot rodders looked down on street machiners. We thought that crowd just bolted on a set of wheels, did a few engine mods and were seemingly in business, whereas us rodders had to resurrect a barn find and engineer a bunch of modern equipment into it to create a car! That might have been true then, but today a well-built street machine is just as much – if not more – work than a hot rod. Street machining at the upper level has become a very sophisticated hobby, and it has the same appeal for today’s adolescents that hot rodding did for us back in the day.

Now I’m building my own street machine project. My wife knows that I need something to do with my spare time other than annoy her, and my two sons are there for support and want to see the project finished.

Our three kids now have their own families and relationships, but modified cars have been and continue to be the glue that holds us together. Just like I did, they’ve experienced how rewarding it is to build your own car and the lifelong friendships you form in doing so.

Just something to hold on to for when we all come out the other side of this.