THE XW Falcon of Dandy Engines’ Frank Marchese has a serious claim to the title of Australia’s quickest street car, having run a PB of 6.96@211mph and taken out the 2018 Street Machine Drag Challenge, the hardest-won prize in street car racing. Amazingly, Frank’s 3800lb X-Dub runs these numbers on leaf springs and a 275 radial, with a twin-turbo small-block Ford under the bonnet making over 2800hp at the hubs. 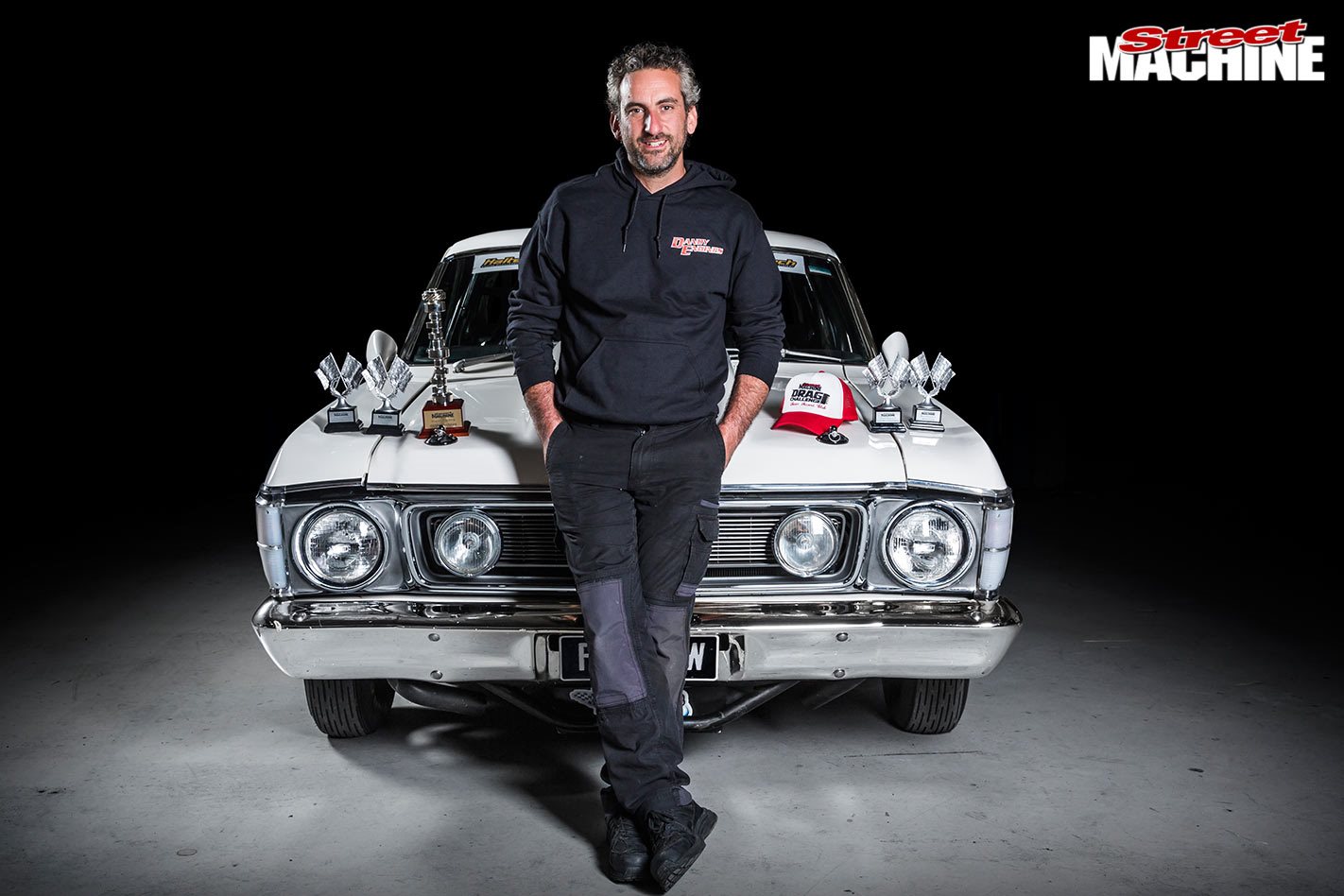 Away from DC, Dandy Engines is the Aussie distributor for Pro Line engines and FuelTech ECUs, so Frank has had his hand in some of Australia’s hottest sleds to hit the quarter-mile, including Steve Bezzina’s six-second, 220mph XW sedan, and the 2500rwhp twin-turbo 632ci Chev in Daniel Szabolics’s HQ Monaro.

With so much power at his fingertips, we had to sit down with Frank to find out how he became the Guru of Grunt. 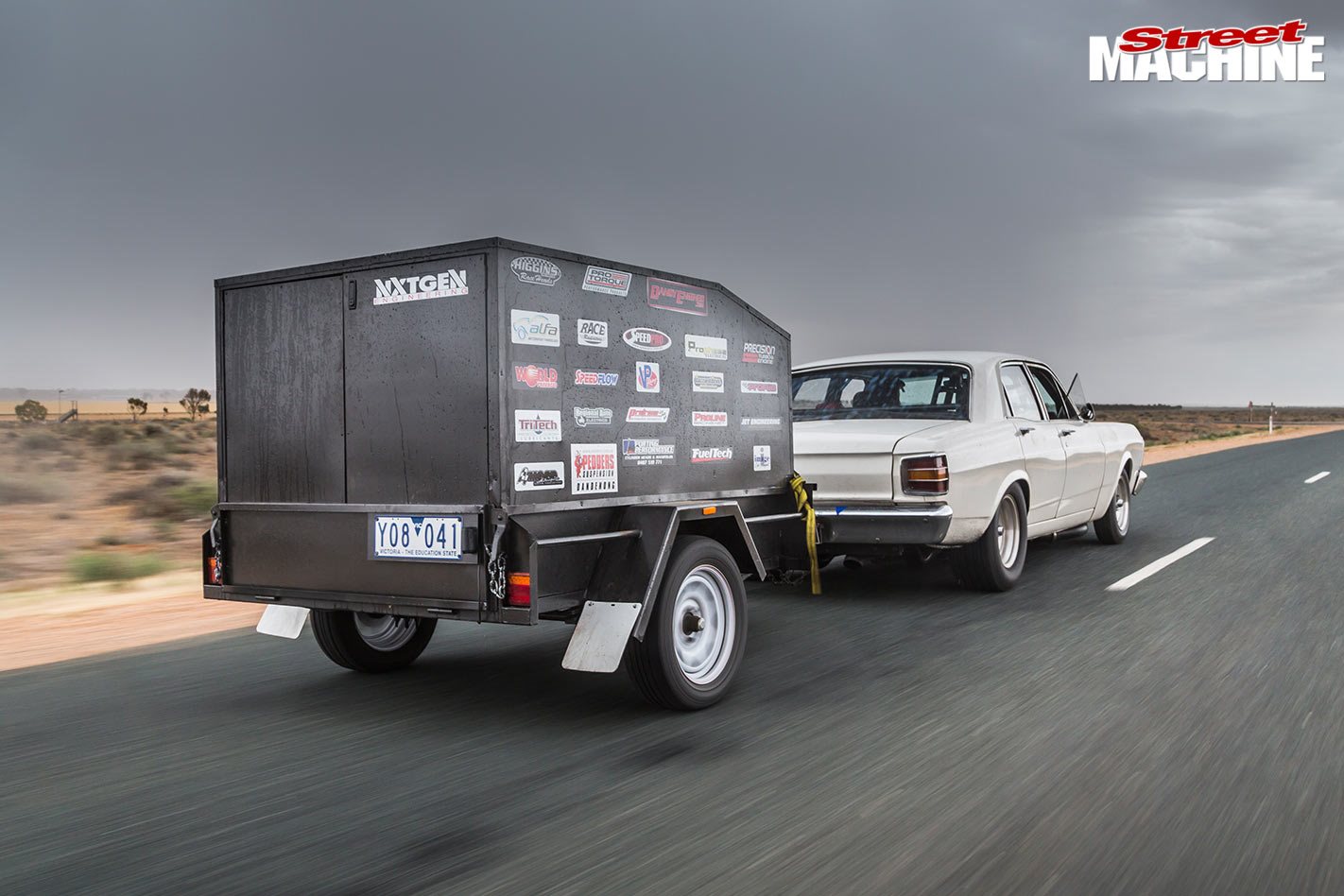 Were you obsessed with fast cars from a young age?

I can remember pulling my slot cars apart at a very young age and taking the motors out. I realised that if a little double-A battery ran them, then a six-volt battery would make it heaps faster. Then I realised the power outlet has 240 volts, so I ran two wires to the power point and, well, thankfully we had fuses that blew easily!

How did you end up working with Dandy Engines’ founder, Lou Iudica?

Lou is my cousin, but I think of him as my big brother. From the age of nine, my mum would drop me at Lou’s on my school holidays and I’d sweep the floors, or tidy up. By the time I was 13 I was stripping motors flat-out, getting them ready for the machinist. I started machining motors and heads; then I got into my apprenticeship as an engine machinist, and in January of 1990, I started with him.

Watch next: Frank's 2800hp XW Falcon on the dyno 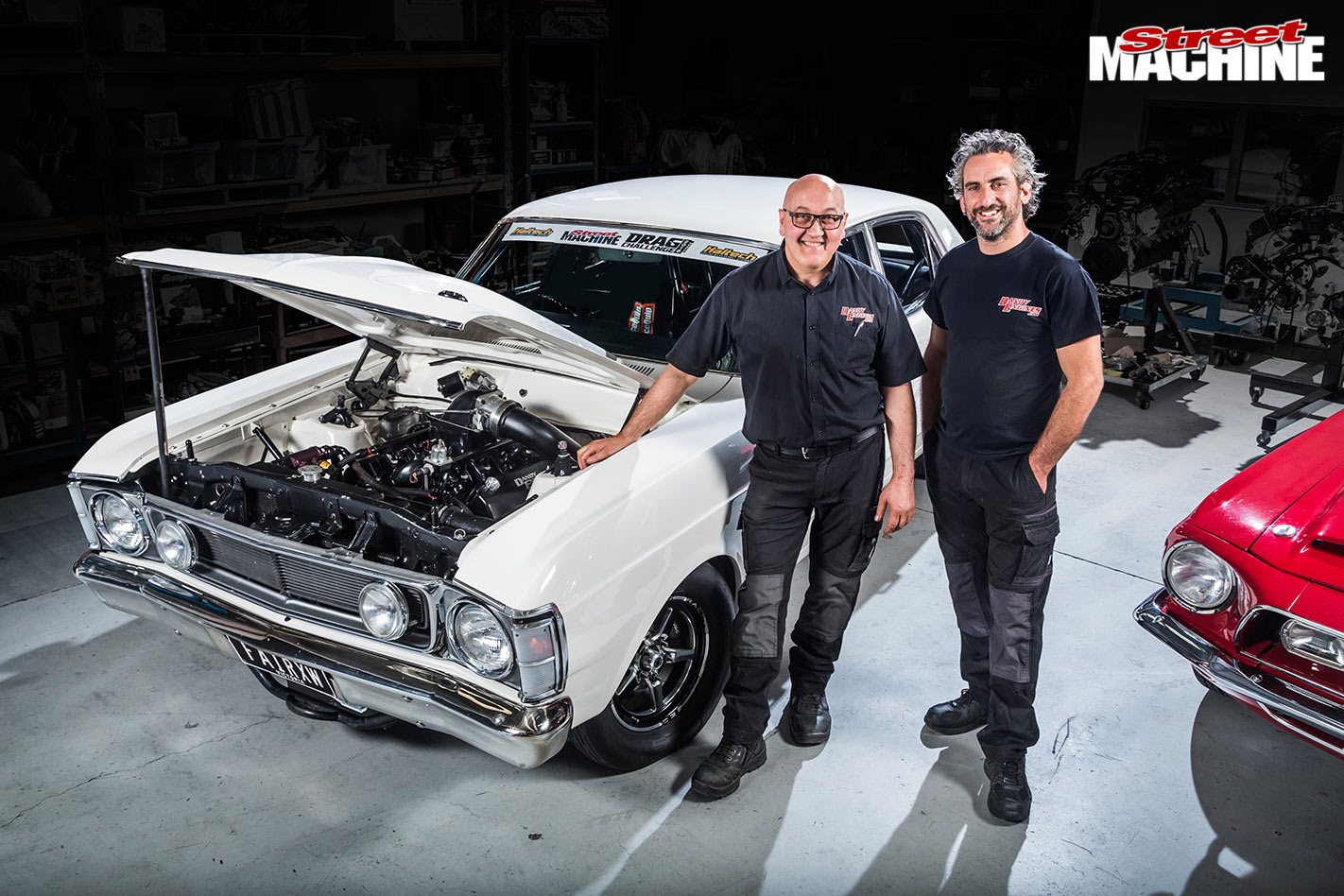 While Dandy has become a heavy-hitter in the small-tyre drag car scene, Frank admits the quarter-mile wasn’t where Lou was most interested initially: “Lou wasn’t into drag or street cars; he’s a circuit car guy. He has done a lot of engines for national-level Sports Sedans and dabbled in Touring Cars here and there. He is one of my biggest inspirations”

You’ve since moved way beyond sweeping floors for Lou!

Lou is the founder of Dandy, but I somehow wind up with a lot of the publicity [laughs]. He does the machine work on the engines so I can come in and put them together, but we don’t have defined roles strictly speaking. It’s a ‘we’ thing, really. 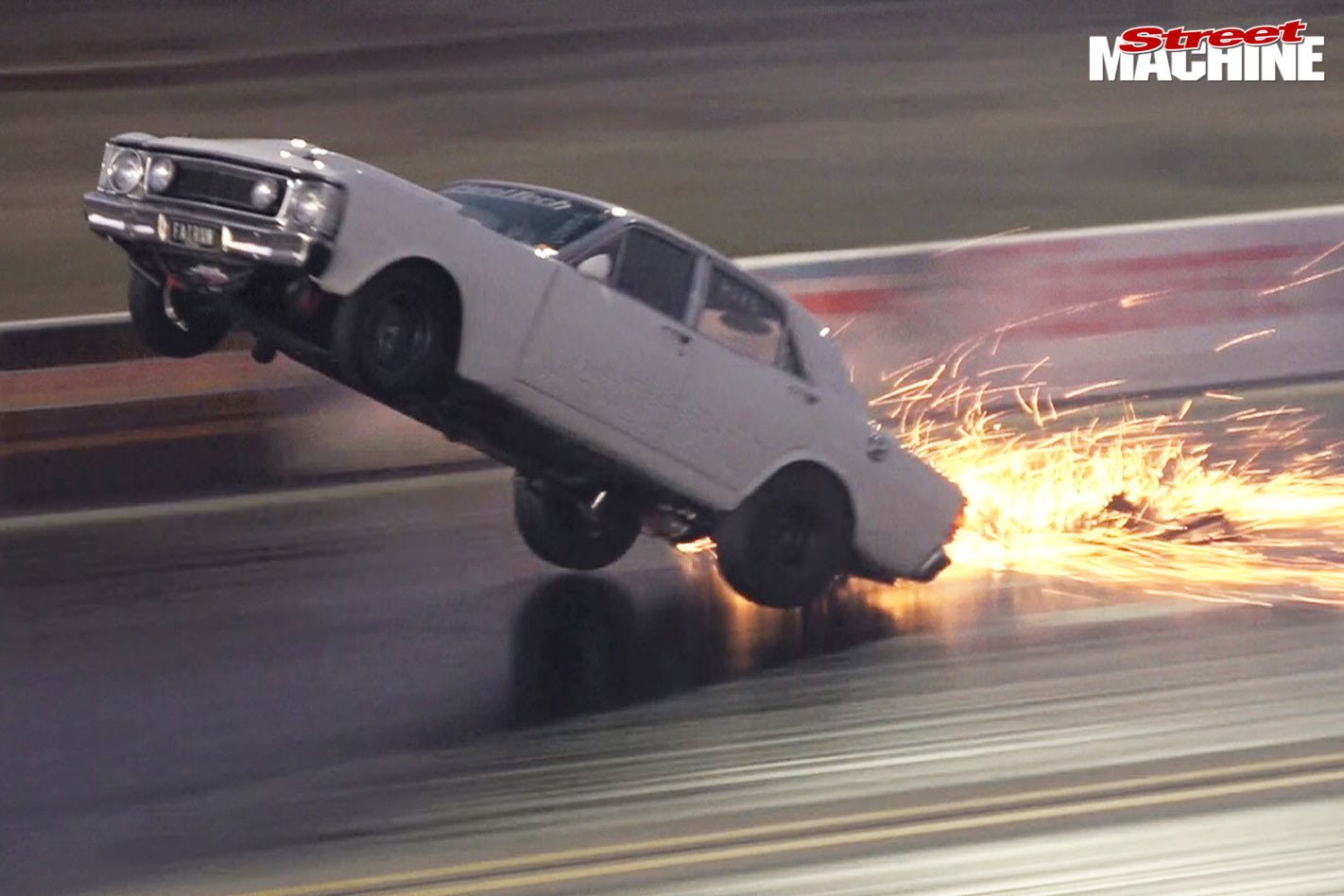 Frank had quite a weekend at the Queensland Jamboree, breaking into the six-second zone for the first time in testing, first with a 6.98@209mph, followed by a 6.96-second pass at 211mph! Further progress was impeded by a massive wheelstand Image: Michael Brennan

How did you get into drag racing?

In 1993 I got my licence and had an XA Falcon with a stock Clevo and a four-speed manual. Some mates convinced me to race my car at Heathcote one day. I think I ran a 14-second pass, and I remember going through the traps thinking: “I want to do more of this.” From that point I’d be at Heathcote every Sunday; I was obsessed. 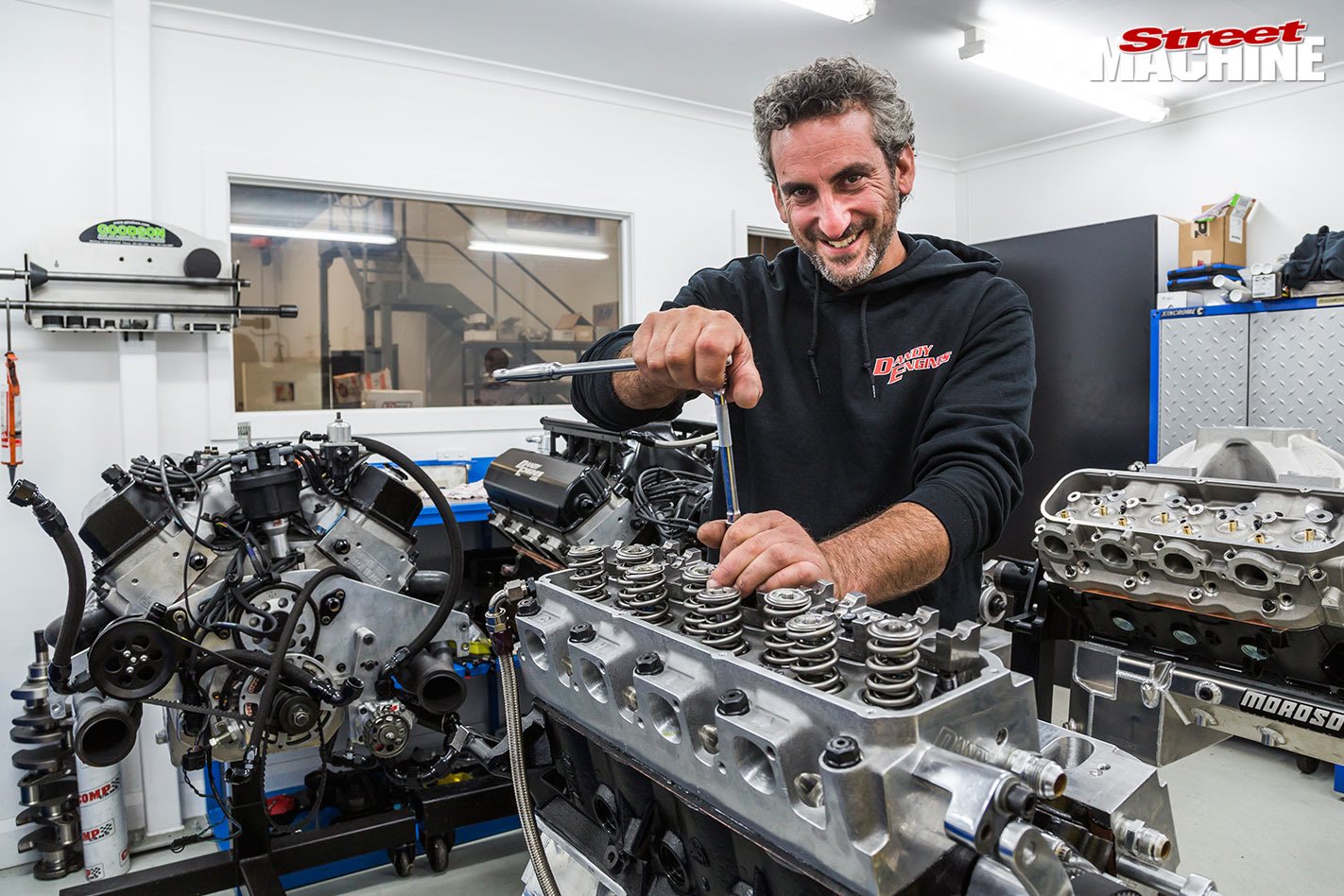 “I did an automotive engine machining apprenticeship when I was 15,” says Frank. “I was doing run-of-the-mill stock motors, and now that I know what I know, I realise that was the best thing I could have done. Machining is the biggest part of assembling an engine. Ensuring the engine is mechanically correct is the key to making an engine work before you worry about power”

Have you always been into turbo V8s?

I’ve been following boosted small-block Fords since the early 2000s. Back in 2008 I did some machining for Dom Luppino’s turbo car, so he invited me to the track, and, as I was keen to learn, I came along and met Steve Petty from Pro Line.

Did you have a turbocharged epiphany that day?

I looked at the motor in Luppino’s car and it was just a small-block Ford. It was alloy, but it wasn’t really different to the small-block in my Falcon. We did four days of testing with a motor making over 2000hp and didn’t touch it once. I thought: “What if we put this in my Falcon?” 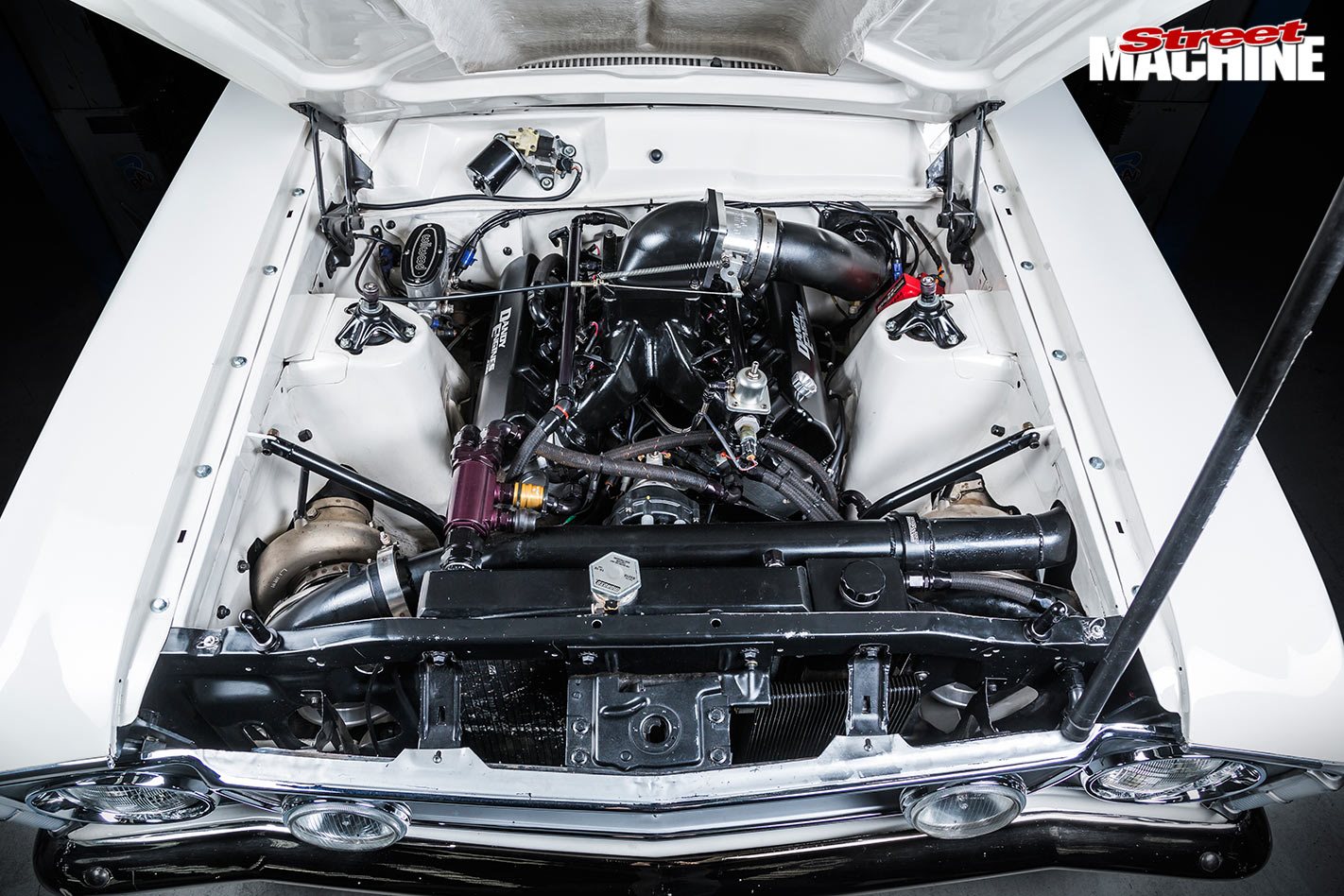 Do you drive FAIRXW on the street much?

My biggest problem is that I’m never home. I’ll be at the shop from 8am ’til 11pm, plus last month I was also gone tuning customer cars three weeks out of four. Straight after Jamboree in Brisbane I flew out to America for two-and-a-half weeks to go to Pro Line.

With the leaf springs and jacketed small-block, is there any more left in FAIRXW’s set-up?

We haven’t got everything out of what we have now, so we will keep on working to get quicker. We’re seeing the leaf springs do things on Steve Bezzina’s 215mph XW that nobody has ever seen before, as the power from the 481X is so far beyond what anyone is used to. So we are learning a lot there, too. 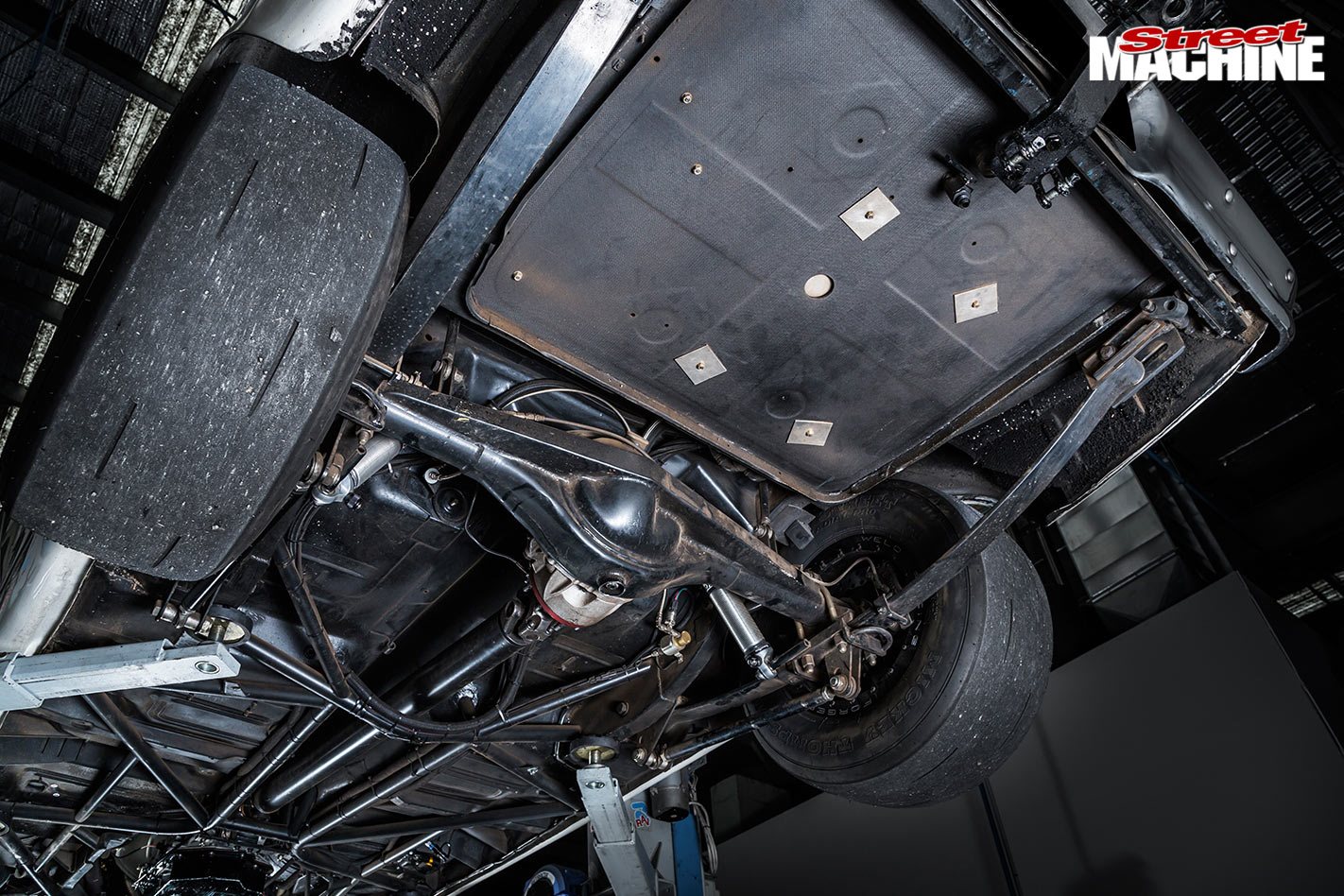 The Profab 9in is held up by mono-leaf springs with CalTracs, with the 275/60 radials squeezed into stock wheel tub

What did you love most about Drag Challenge last year?

It gives me goosebumps; it was the best week at work. That said, if we could do it all over again I’d change the car set-up. Once we went through the data I found the converter was a little too aggressive; one little thing held us back so much!

Will we see you back at Drag Challenge in the future?

The plan is to ride shotgun in Daniel Szabolics’s HQ Monaro, which we did a twin-turbo 632ci Chev for; I’m so pumped to go again! 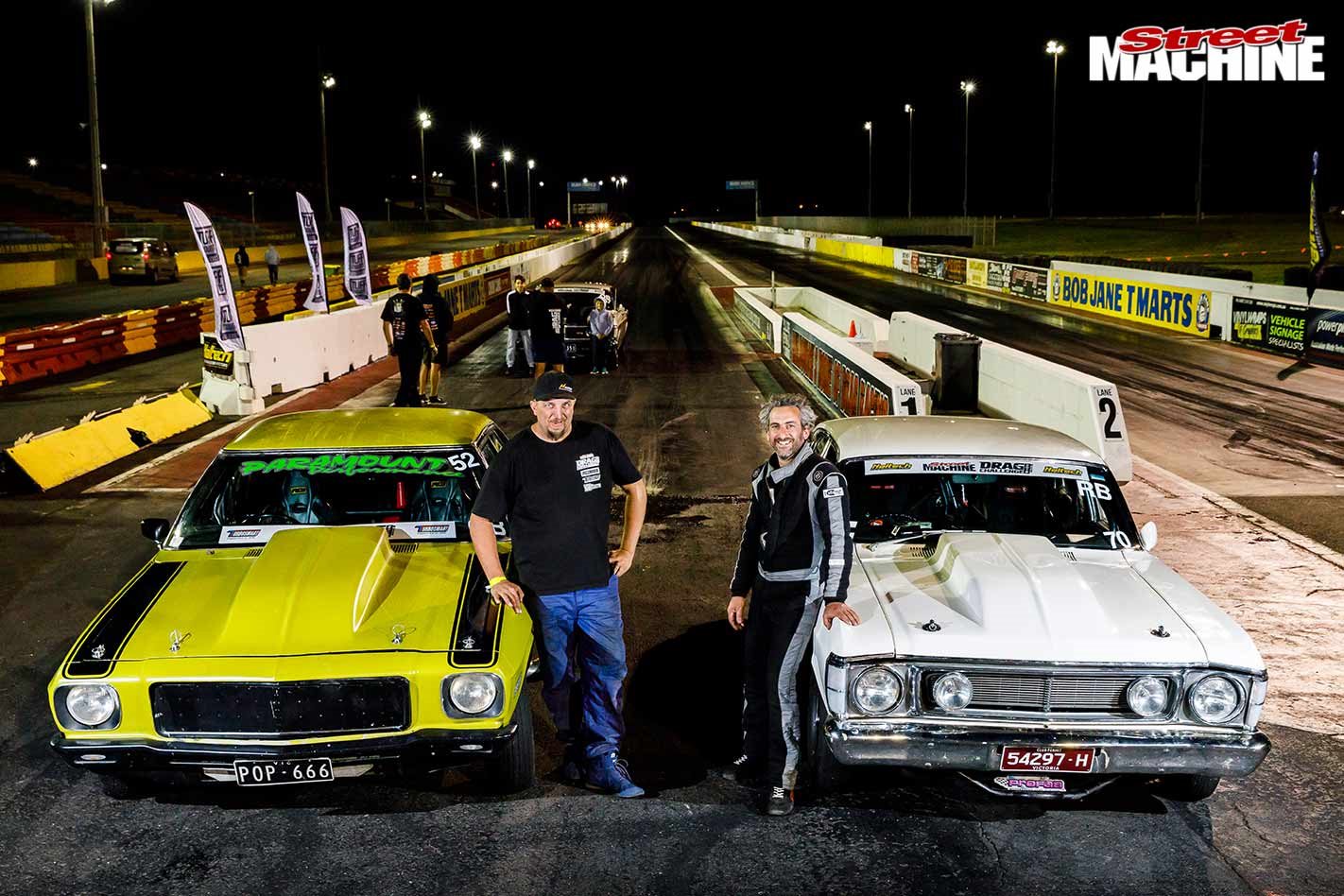 The battle for overall victory at DC 2018 was a doozy, with Harry Haig's twin-turbo big-block HQ leading Frank and the XW until day four at Swan Hill, when the XW posted a record-setting 7.36 at 192mph and jumped into the lead. The pair then traded blows on Day Five, until a snapped control arm put the HQ out of the game

Do you find you spend as much time talking customers through combos as you do screwing them together?

People are spending big money on these turbo cars, easily over $100,000, so I spend heaps of time consulting with customers. This way, when we roll a car out it does exactly what we want it to do. A big part of this comes because we’ve spent years building relationships with Pro Line and FuelTech; I couldn’t have been so successful without those guys.

Are we living in a golden age of horsepower?

Anyone can make horsepower now; it’s who can make it survive that is the stand-out, for me. Any of our guys with a Pro Line or twin-turbo big-block can make 4500hp, but we haven’t screwed them up that hard. They’re so expensive to get here, you need to come up softly on them. If you push them to 4500hp the maintenance goes through the roof; you’ll be changing rods every 15 passes! 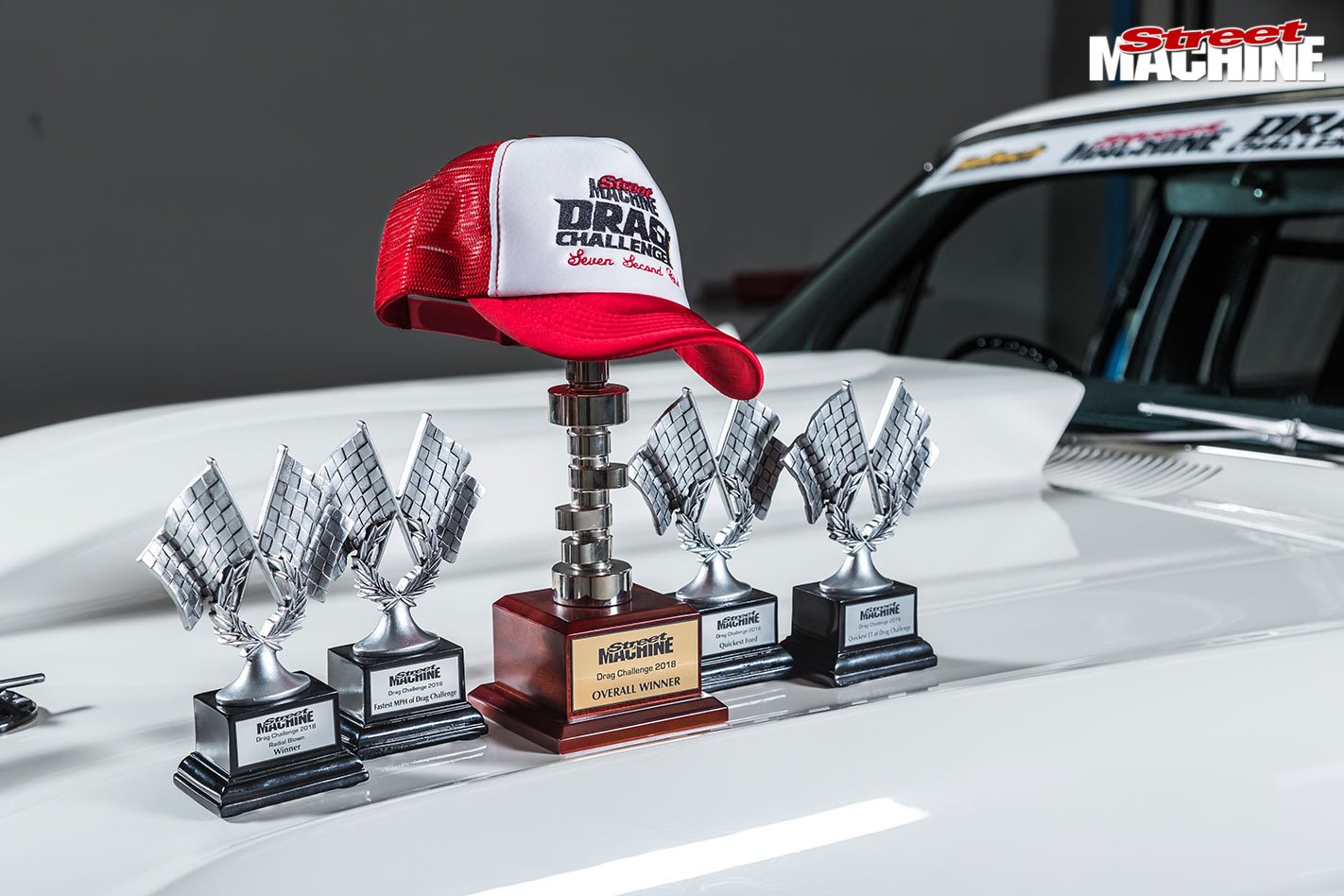 Having clocked up more than 1300km on public roads, FAIRXW scored heaps of tinware at Street Machine Drag Challenge 2018, including the outright win, the Radial Blown class win, and the quickest and fastest passes in Drag Challenge history with a 7.36@192mph

Is data the key to making big horsepower and running quick times?

Making these things live is all about the fuel-injection system. Having the right amount of timing and fuel in a motor are the keys to making power, so if you can control them, that’s the secret. The fact that FuelTech can follow our closed-loop fuel targets so fast, and control two injectors per cylinder, means we can hit our targets. Then you have traction control; I never in my wildest dreams thought I’d be running 1.09s in the 60ft on a non-radial track! 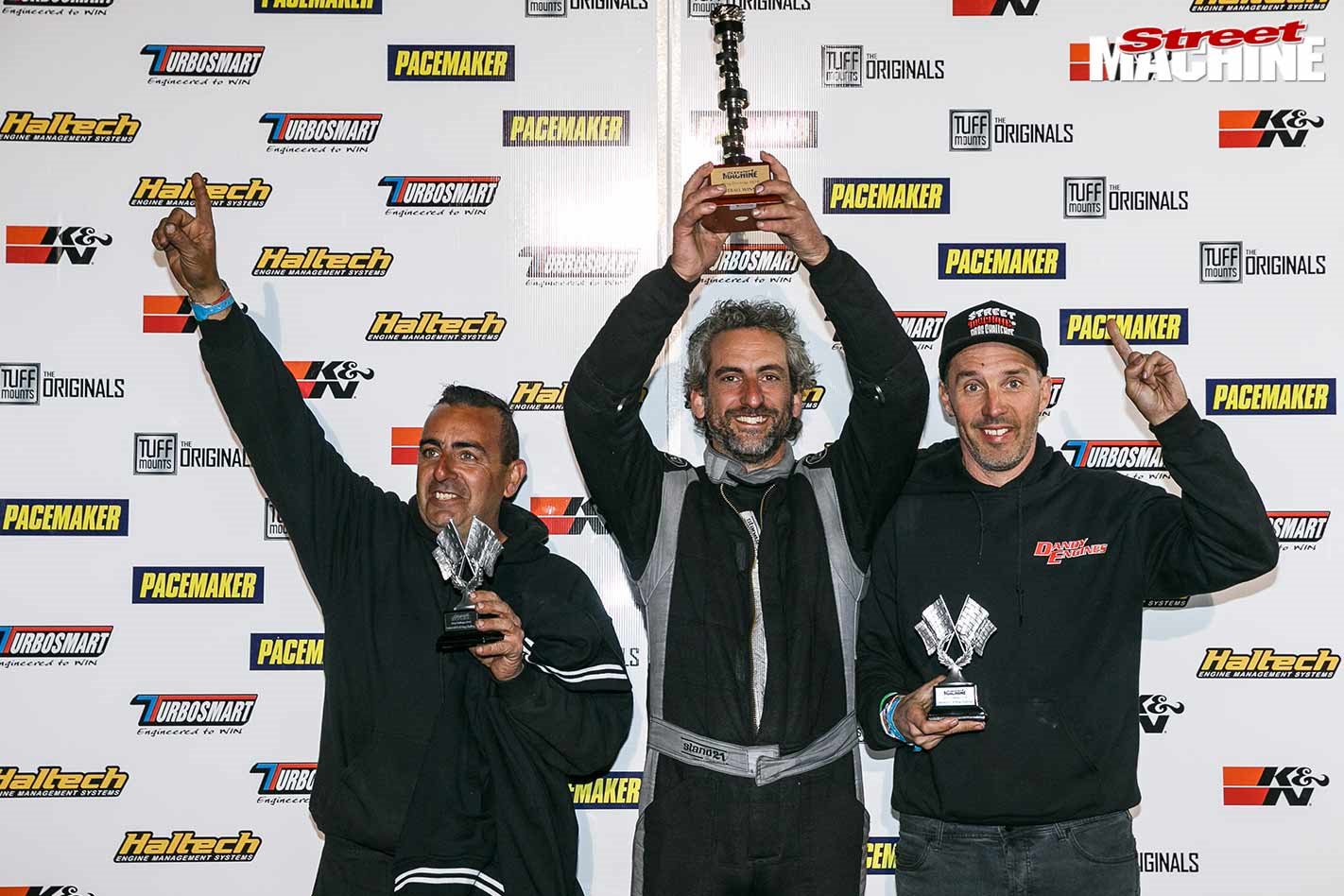 How did it feel to finally crack a six in FAIRXW at Willowbank the other week?

It was an amazing feeling; something I’ve been chasing for a while. I wanted to do it two years ago but it wasn’t easy; we had to work for it and that made it all the more rewarding when we finally got there. When we ran the car on the Wednesday afternoon I was supposed to get off it at half-track, but it sounded amazing so I kept on it. Normally when I pull the ’chutes at 200mph it gives a bit of a wiggle, but this felt like the back wheels were off the ground! It felt like maybe a 7.1, but it seemed like the mile an hour was strong. When the guys told me it’d gone 6.98@209mph it was an amazing feeling. Then to back it up with a 6.96@211 was incredible. We got so much great feedback; it was so great to hear the people from Willowbank and the guys who sponsor me tell me how happy they were with the level of interest we managed to generate. I feel like the Coyote finally caught the Roadrunner, and to be honest I don’t know what to do with myself now! I’m used to going back and looking at the data, seeing where I’ve gone wrong and how I can improve. But I’ve crunched the numbers and if I can keep the front end down and the crank in the motor it has an .80 in it.