JUST finishing Street Machine Drag Challenge in any kind of fast car is an achievement, and taking home any of the awards on offer is impressive. To win the whole thing, you need a lot of things to go right. Therefore, we present to you the complete list of Drag Challenge award winners from the event’s beginning in 2014.

1. HARRY HAIG – 1972 HOLDEN HQ KINGSWOOD – Time: 30.258
The Big Dawg took command on Day Three, running the only four-second pass over the eighth we saw this year, and he never let up. A donated lifter from the Szabolics team fixed the HQ’s only major gremlin of the week.

2. BRENDAN CHERRY – 1987 HOLDEN VL CALAIS – Time: 30.845
Brendan Cherry started the week with a new fastest mile-per-hour at Calder, and then ran a string of low fives at the eighth-mile tracks. A 7.61@184mph on Day Five was enough to put the DC veteran into his highest ever placing.

3. DANIEL SZABOLICS – 1971 HOLDEN HQ MONARO – Time: 30.896
Dan Szabolics’s Monaro ran the quickest and fastest pass in DC history on Day One, with a 7.35@197mph. Bad luck with the weather frustrated the team, though the HQ still took out the win in the Haltech Radial Blown class.

4. KAI McPHEE – 1980 HOLDEN VC COMMODORE – Time: 31.498
Though he didn’t have the sheer grunt of the fat-blocks, Kai McPhee’s VC Commodore held up a fight on the eighth-mile, taking the quickest time of Day Two at Mildura, not to mention a new PB over the quarter of 7.89@175mph on Day Five.

6. RICCARDO PONTONIO – 1985 HOLDEN VK COMMODORE SL – Time: 32.427
Despite being a fresh build with zero track testing before the event, Riccardo’s VK finished the week sixth outright and fourth in Haltech Radial Blown, with a PB of 8.10@174mph.

9. CHRIS KAARSBERG – 1976 HOLDEN LX TORANA – Time: 33.132
Queenslander Chris Kaarsberg put in a massive effort, doing the whole event solo in his 1300rwhp LX Torana. He came oh-so-close to a spot in the Seven-Second Club on Friday, but a place in the Top 10 wasn’t a bad consolation prize.

1. PAUL TURNER – HQ HOLDEN – Spread: 0.05228sec
Right up until the trophy call, it was anyone’s game in the unpredictable K&N Dial Your Own class. Top spots were in a constant state of flux over the five days, but in the end it was ex-competition drag racer Paul Turner who was crowned 2019 K&N DYO champion, in his HQ sedan. The first-time DC contender finished the week with a tight 11.373sec on his 11.396sec dial-in, for a tiny 0.05228sec split for the week.

3. STEVE GRIMA – VK CALAIS – Spread: 0.09299sec
Day Three and Four class leader Steve Grima cut drag laps like crazy on Day Five, but couldn’t secure his VK Calais the win. “I might’ve got the time on the final run if rain hadn’t finished the meet,” a deflated Steve said. He had to be content with third, 0.09299sec off his initial 10.573sec pace.

5. DANIEL GRIMA – 1955 CHEVY BEL AIR – Spread: 0.11933sec
Drag Challenge stalwart Daniel ‘Gizmo’ Grima almost gave up on the hunt after placing 27th in class on Day Two. But he put in a superb effort of playing catch-up in his immaculate 11-second ’55 Chev Bel Air to finish fifth with a final spread of 0.11933sec. 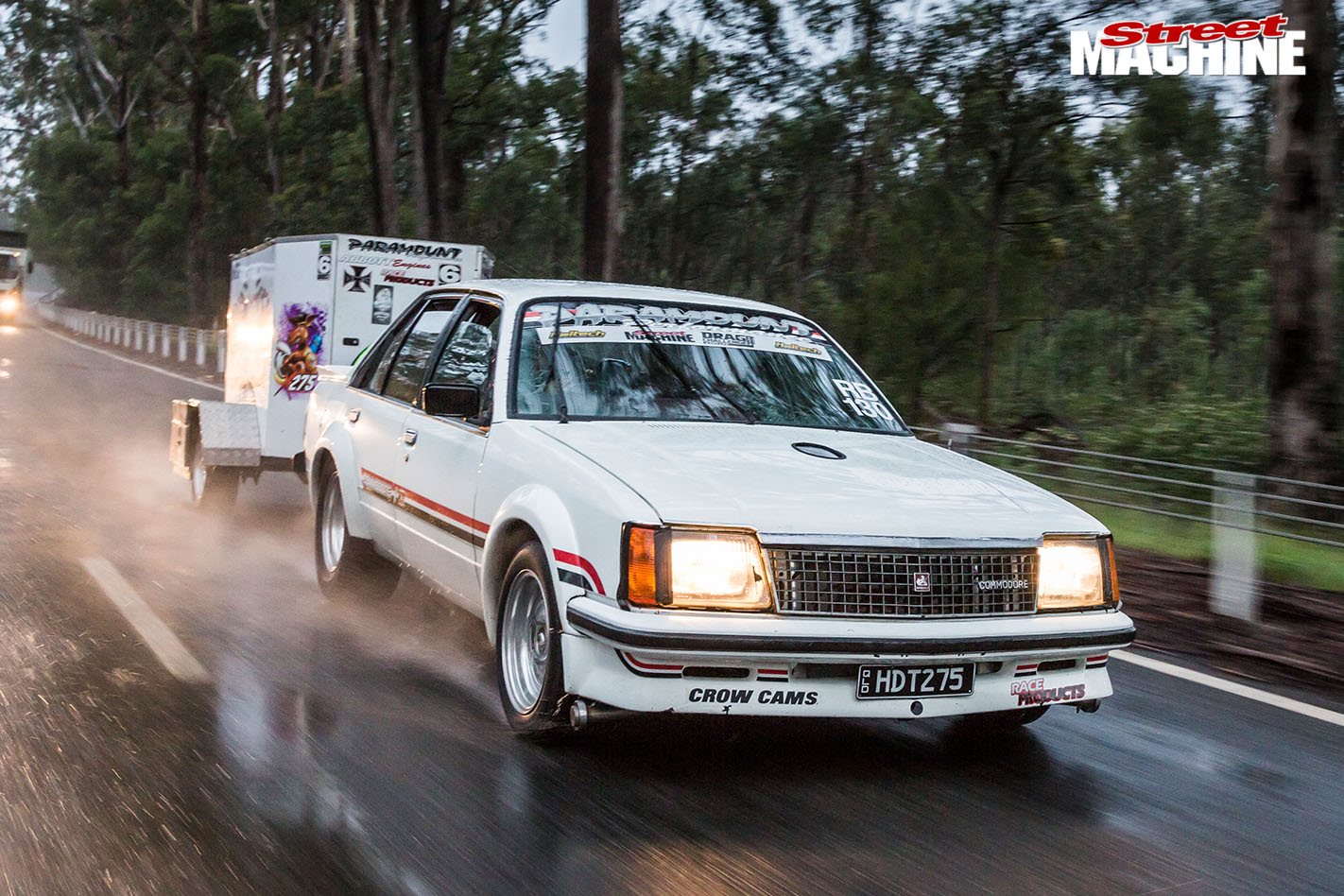 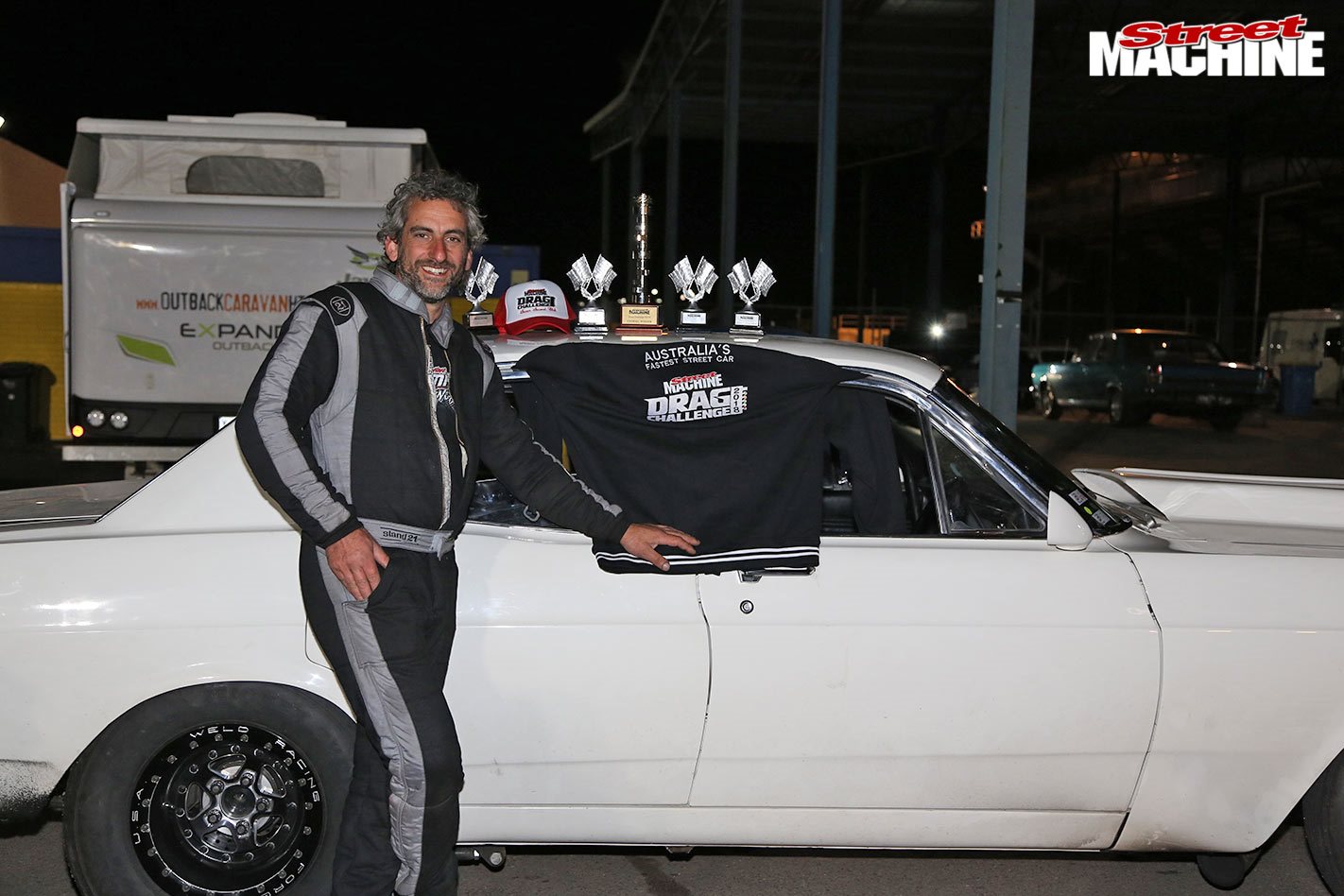 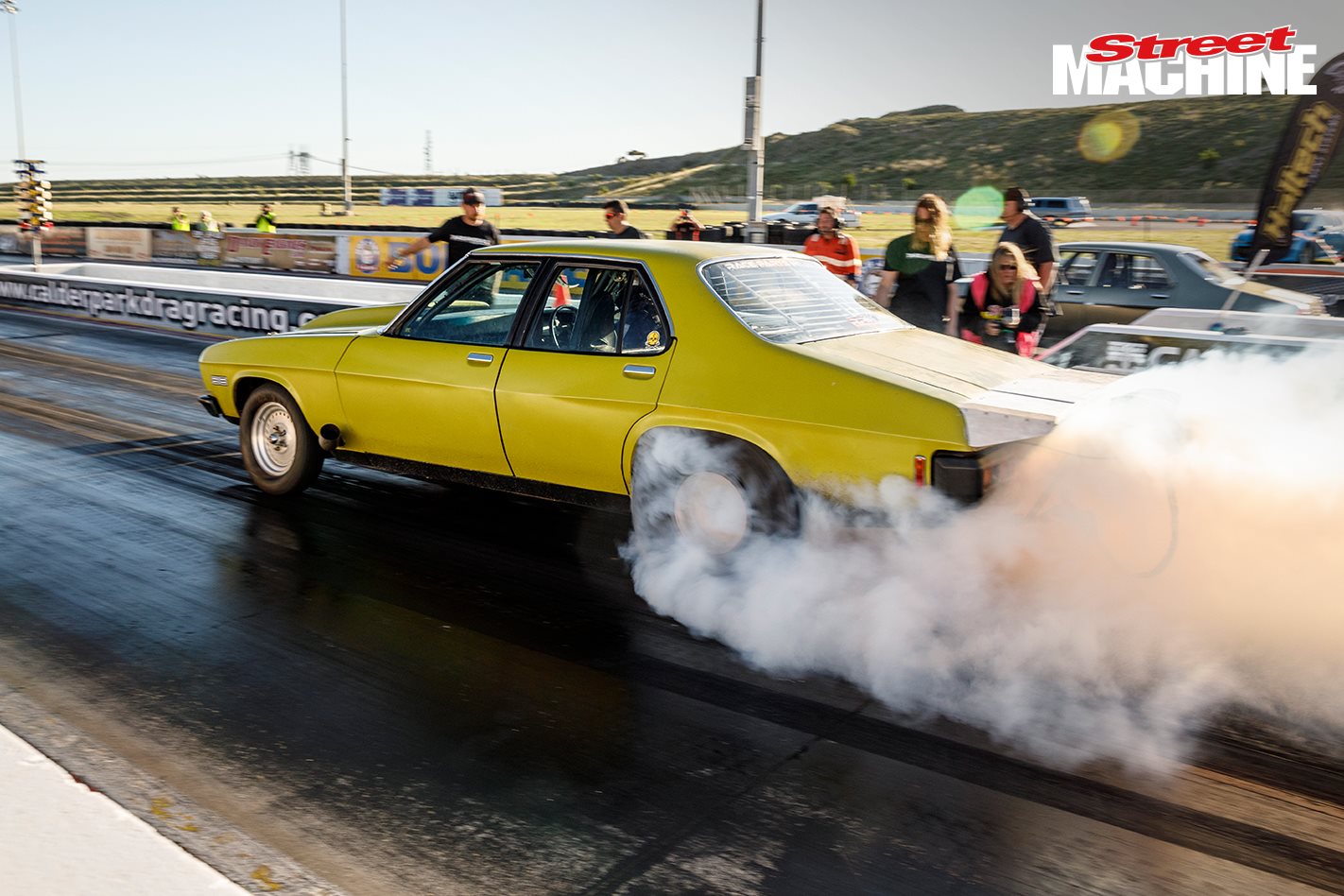 Quickest Without a Trailer: David Williams

In 2017, Drag Challenge went to South Australia for the first time. We started at Adelaide International Raceway (AIR) then made our way back into Victoria to Mildura's Sunset Strip before heading down to Swan Hill Raceway for day three. On day four we were washed out at Portland's South Coast Raceway and we finished up on day five back at AIR. It was close at the front between Quentin Feast, Mark Drew and Adam Rogash but by day three, Quentin had pulled a few tenths on Drewy and held that lead til the end to claim his third Drag Challenge victory.

Quickest Without a Trailer: Marcus Howe

In 2016, Drag Challenge started and finished at Calder Park, with Mildura, the brand-new Swan Hill track and Heathcote Park in the middle. We had over 100 cars front on the first day, with the standard at the pointy end of the field higher than ever. Bubba Medlyn set the pace from the go and held his lead right through the event, despite the challenge presented by Jarrod Wood’s brutal HQ One Tonner. 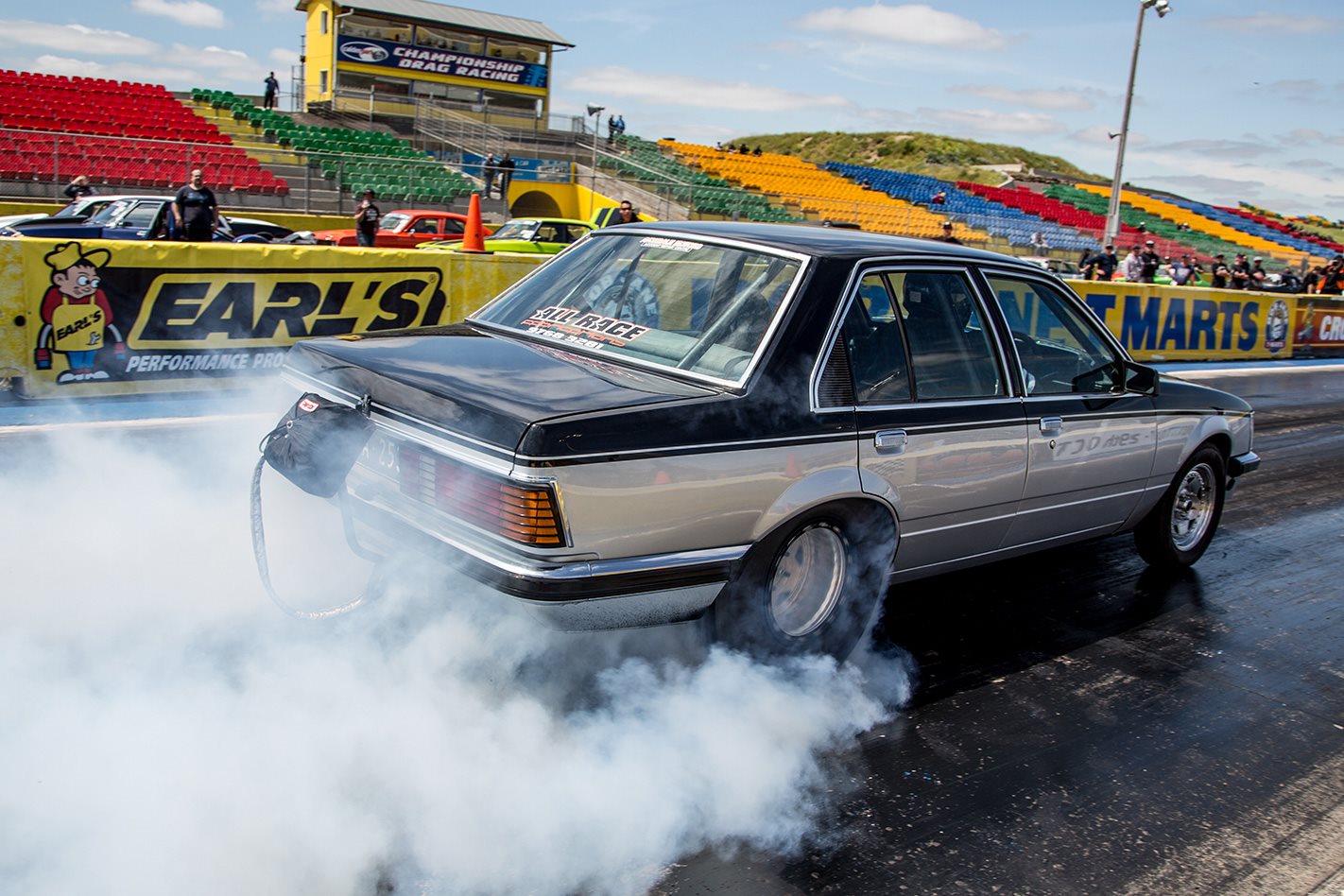 Quickest Without a Trailer: Todd Foley

The second Drag Challenge event was our first true five-day event, starting at Calder Park, followed by Portland, Mildura, Heathcote and back to Calder. That meant a total of 1400km of car-torturing travel for our 50 entrants! Reigning champion Quentin Feast grabbed his second win on the trot, managing to hold off Terry Seng’s VC Commodore as the pair exchanged pass after pass on the final day. 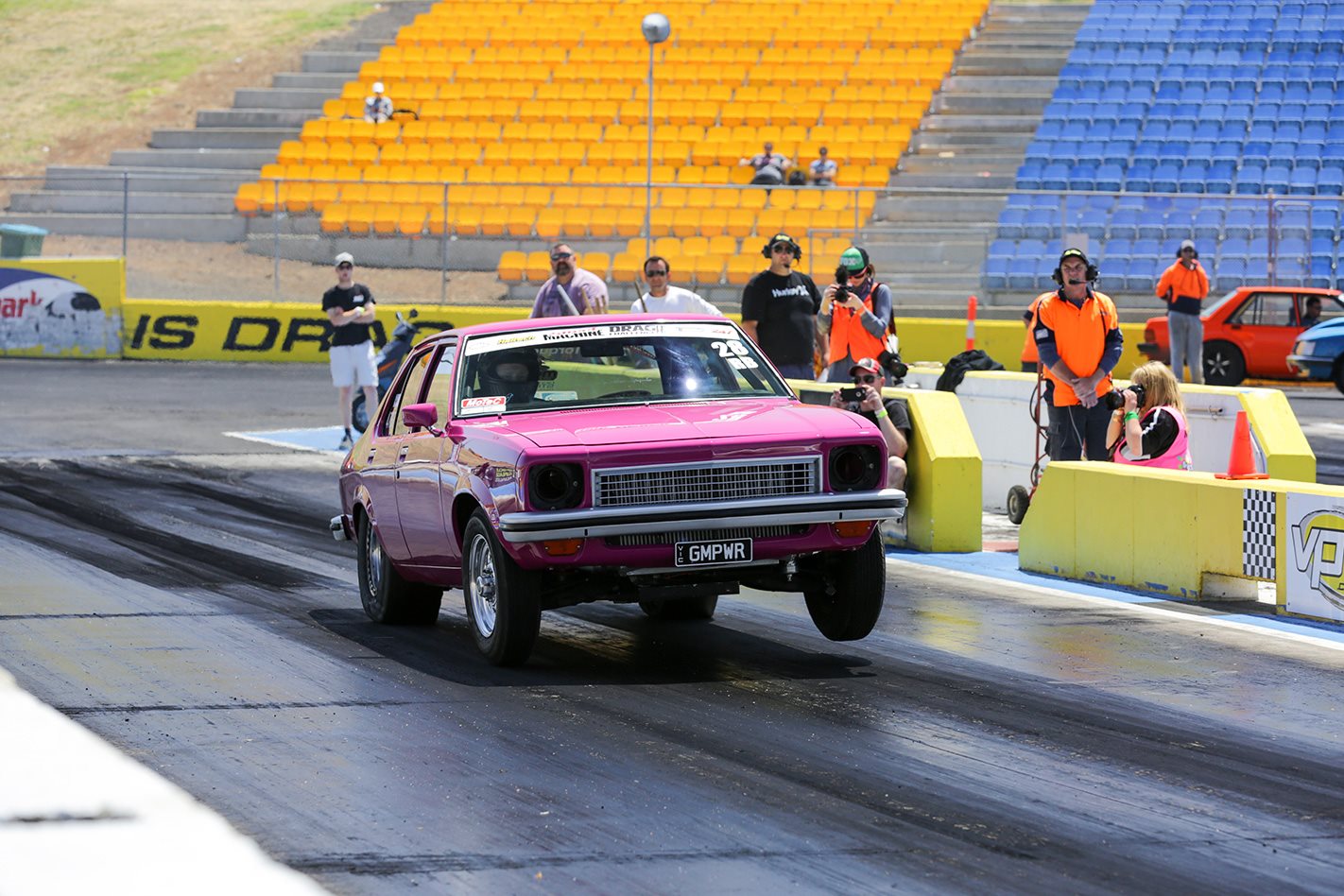 Quickest Without a Trailer: Mark Clifford

THE first Drag Challenge ran from Sydney Dragway (rained out), to Albury’s Motorsport Training Australia facility (for some untimed Street Outlaws-style racing), then on to Calder Park, before finishing up at Heathcote. We had 18 entrants that year and Quentin Feast in his twin-turbo LS Torana emerged from the week as the overall winner. We ran no DYO class in the first year. 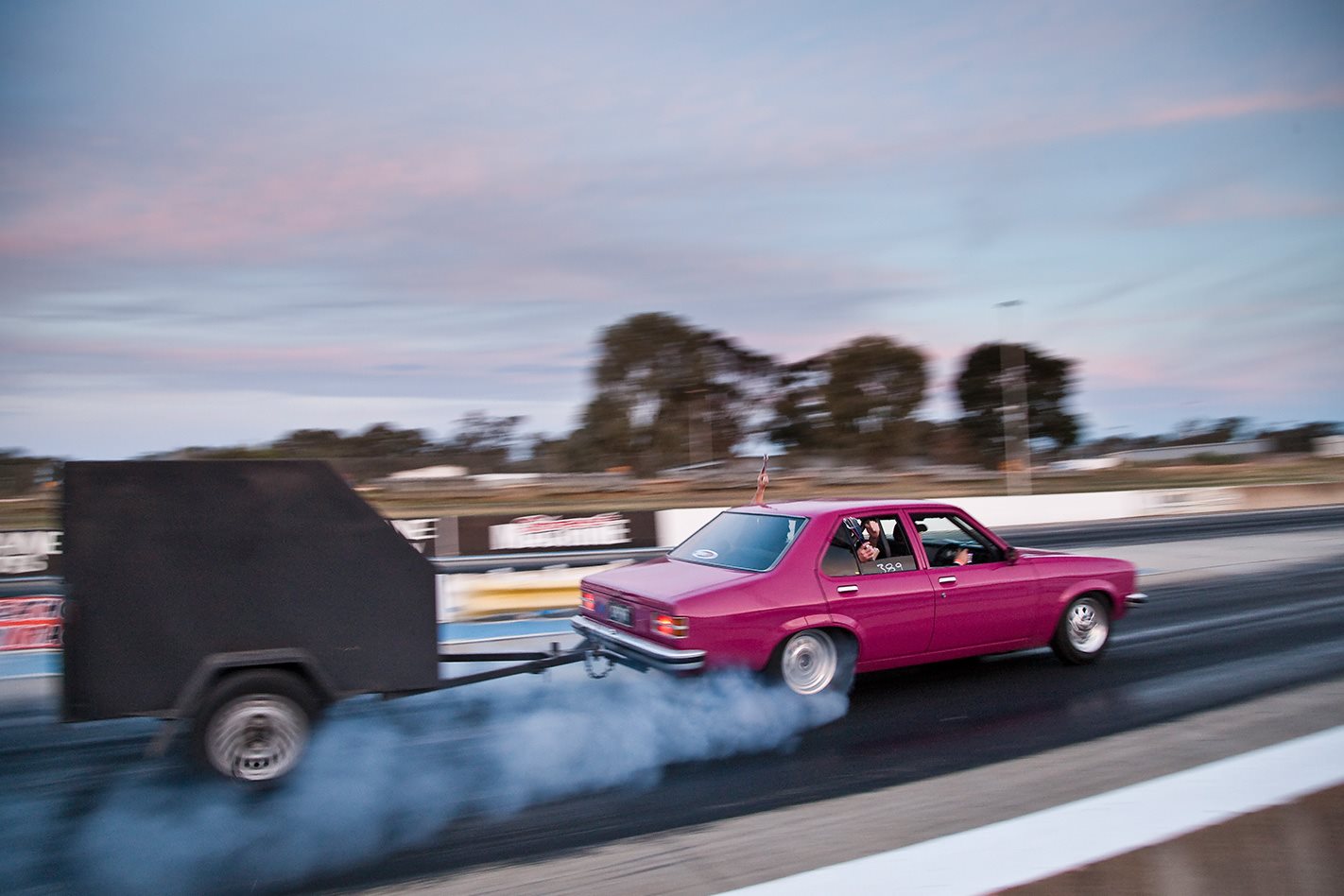 Quickest Without a Trailer: Luke Foley

AT each event, a red cap is awarded to those drivers who break through the seven-second barrier at Drag Challenge AND finish the week. Here's the honour roll: 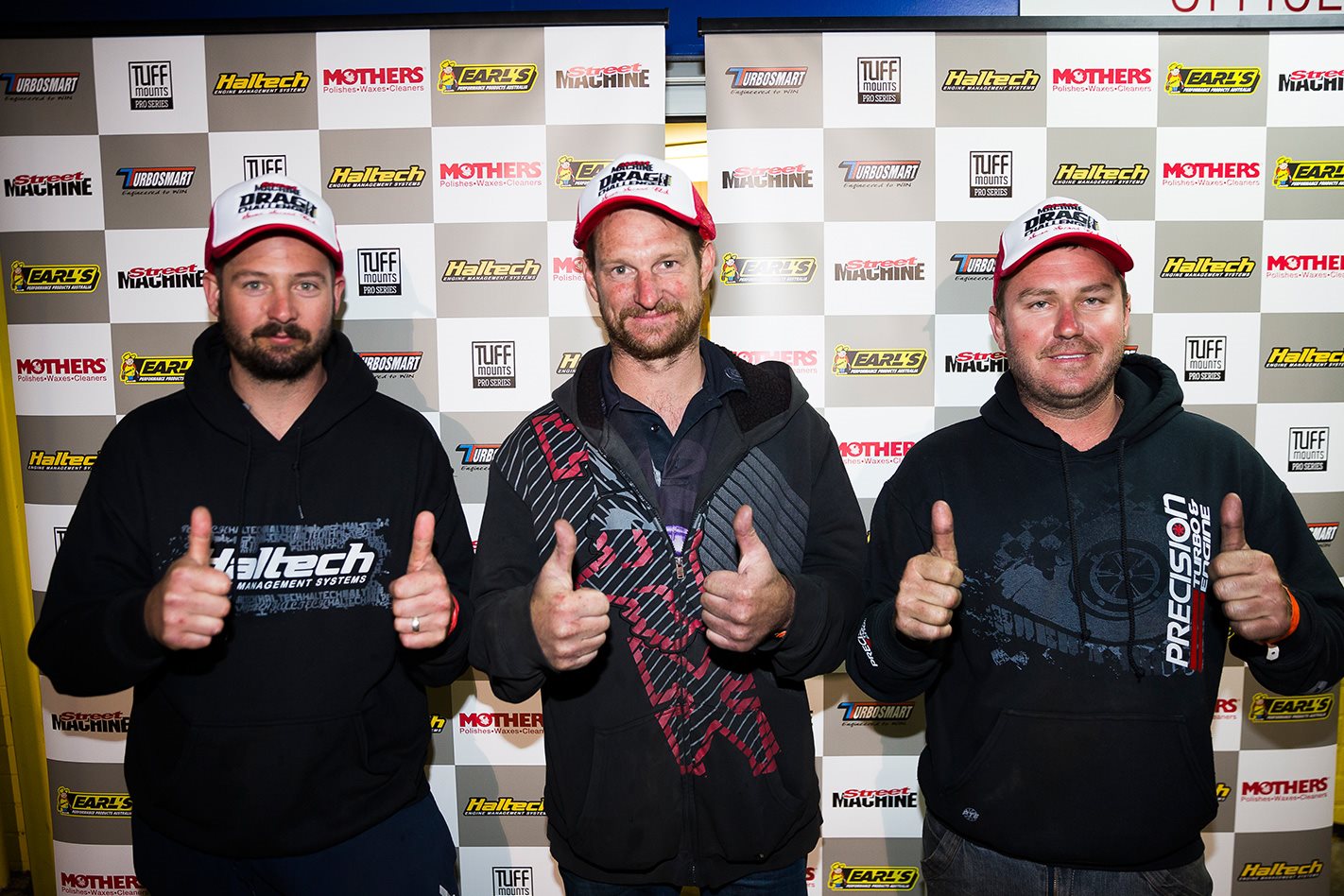