MELBOURNE speed shop proprietor Geoff Paton wanted a car to promote the high-performance image of the hardware he sells at his Super Plus shop, in the famed Bennet Street, Dandenong. So he went all out and built a car that is at home on both street and strip. Try a nitrous-assisted 454 Chevy Rat hooked up to a Turbo 400 trans and nine-inch Ford rear end. And how about 9.94@137mph!

Geoff has always had ‘warm’ street cars, but he admits it was when he switched to big-blocks that he really came to know what power was all about. “As the late Andrew Rowe used to say, the big-block was a motor with dial-your-own horsepower, and if in doubt, bore it out.” Needless to say, that was his main reason for choosing the big-block. 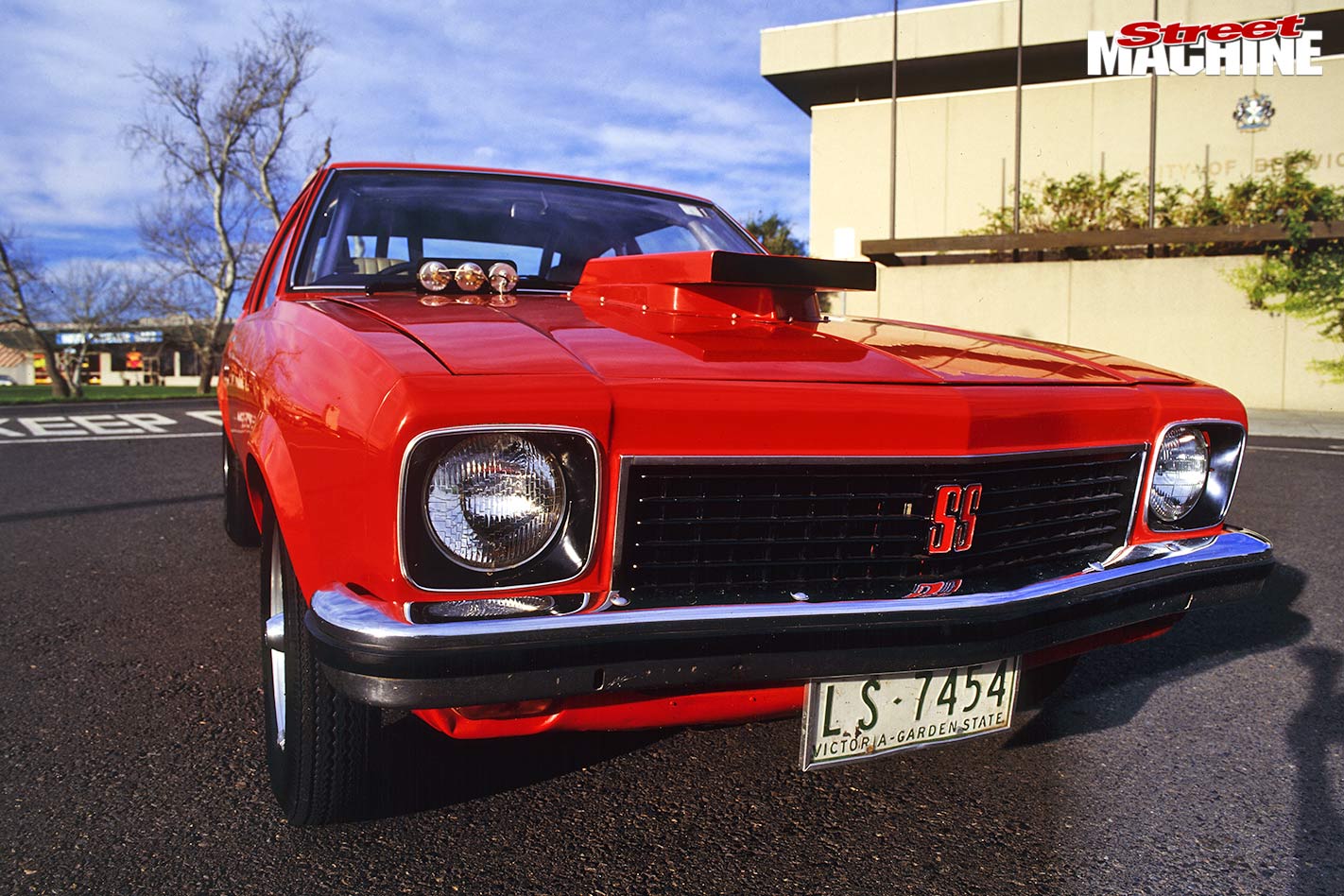 Geoff started his love affair with power after buying a 350-powered A9X that, with a Turbo 400 to run the power through, got down the track in 12.76 seconds at more than 116mph – on street tyres. Next came Geoff’s first big-block, a 400 Chev-powered EH that went 11.8 on slicks. Geoff said once he saw how well the 400 performed he had the urge to build a really fast big-block. “The possibilities with a big-block are just about endless as far as power output is concerned,” Geoff told us.

So Geoff went about building his ‘fast’ big-block and used only the best and most proven components in the engine. These included a two-bolt 454 block that took 3/8-inch rods that were crack-tested and fitted with SBS rod bolts. A steel crank with forged pistons completed the bottom end.

A radical cam was not employed, but one that can run the tappets a bit loose, so a Comp Cams mechanical unit was installed with a 0.620in lift. A Cloyes timing chain and a Mellings high-volume oil pump were used with an oil-gallery restrictor and standard pump. The heads are Chev D-port items that have been mildly ported to match the Edelbrock C454 manifold. They also have Isky 8005 springs and Chev 3/8-inch pushrods. BRC rockers complete the valvetrain picture.

A Holley 1050 Dominator carby is fitted with odd power valves to help prevent stutter off the line. Spark is provided by an Accel distributor using Moroso leads. The motor is a tight fit and only very low valve covers can be used because the brake booster is so close. This is the reason a stud girdle isn’t employed. 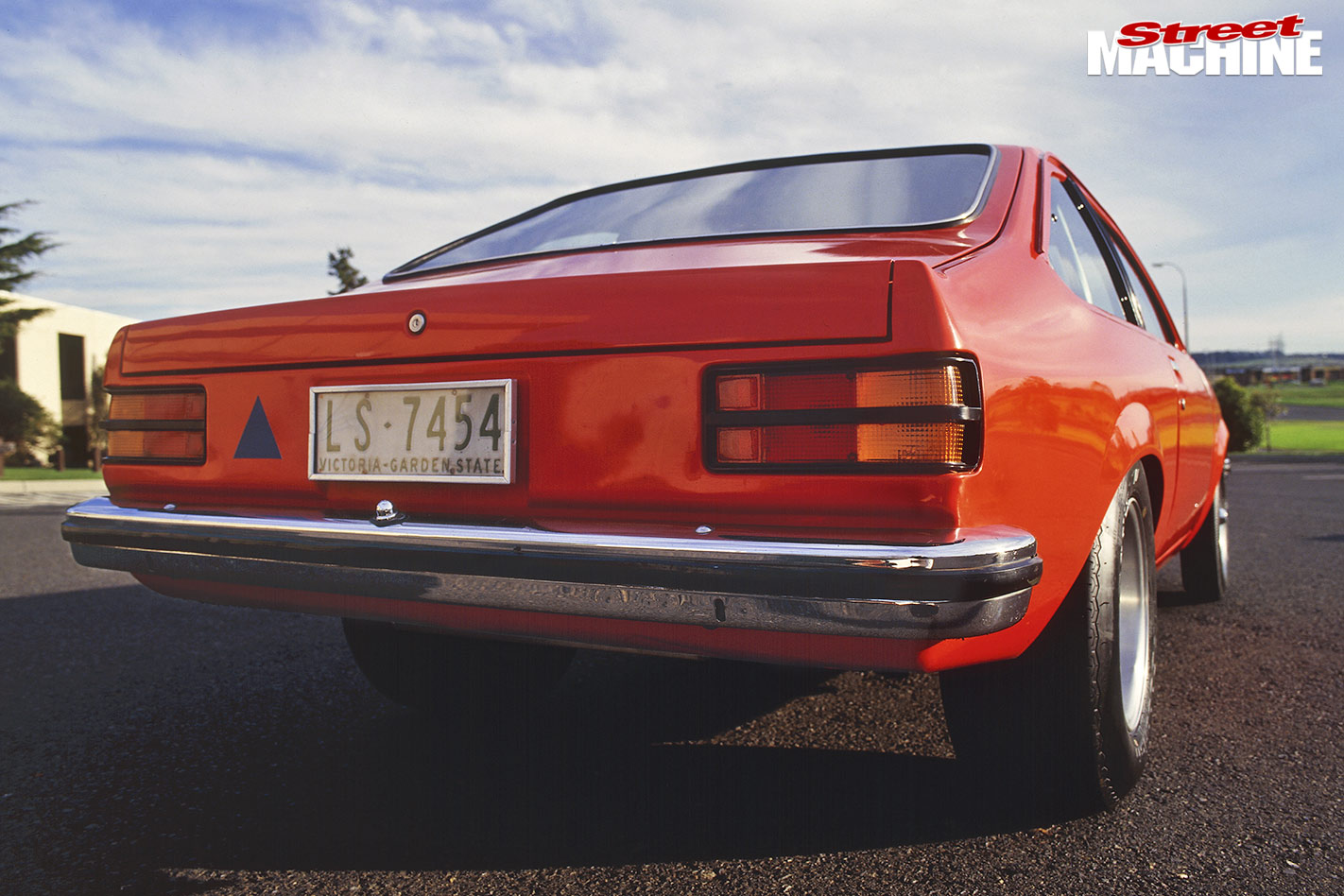 Super Sedan race ace Shane Cable made the two-inch primary extractors, which flow into 3½-inch collectors, narrowing to 2½-inch Turbo mufflers. Before the fuel is turned into exhaust it starts off as a mixture of super and Avgas and is pumped around by an electric fuel pump and a regulator.

It’s amazing how much of a difference just a little nitrous oxide can make. Geoff has run the car with and without nitrous and the difference is some eight-tenths of a second. The car will run a consistent 10.7@128mph without the laughing gas, but the flick of a switch bumps up the ante to an incredible 9.94@137mph. The source of this magical power is a Magnum nitrous system that replaced the original NOS set-up.

Backing up the engine is a Turbo 400 that amazingly runs through a stock Chev 11-inch driveplate but has a transbrake to lock it into first gear. A ‘mystery’ converter was found lying around in the shop to which the brake was fitted, because the car had a tendency to creep on the line at the drags.

The power is passed to a narrowed nine-inch diff that uses a 4.86 ratio at the moment. This may change as Geoff has been a bit scared that the rod bolts won’t hold up as the car crosses the finish line at 7500rpm. The car is doing 137mph at this point and although he has a parachute fitted he finds that WB Holden brakes pull the car up fine. 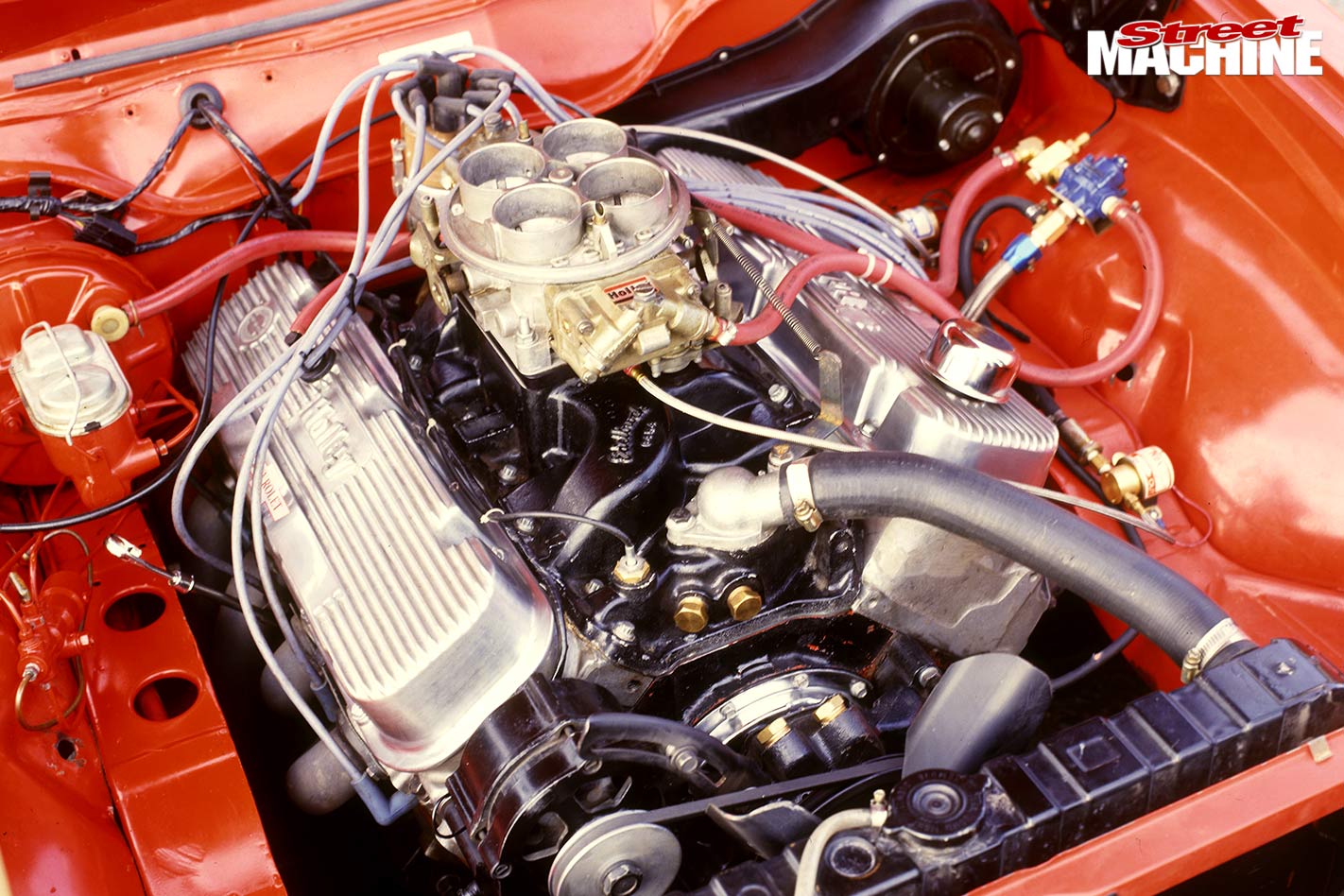 When Geoff built the car he didn’t have an LSD centre so a spool is hooked up to a pair of 31-spline axles. As we said at the top of this story, the car is a genuine street-driven piece, even though those 137mph trap speeds are run in 9.94 seconds. The car is quite flexible really, as it has a 350 Chev radiator that keeps the engine cool and has only run hot once – and that was in 40-degree weather. The radiator is aided by aluminium heads, which dissipate heat very quickly.

All the engine work was done by Kevin ‘Leroy’ Hughes, assisted by Robin Waite, while the detail work was carried out by George Serepisos. “We have learned a lot from this motor and are now keen to build a ‘big’ motor with a roller cam and other radical parts so we can rev it out with no problems,” Geoff told us. “The only thing is that the transmission or diff is likely to be left on the ground, so we will have to upgrade those parts too,” he said.

While the car was built to be as fast as possible, it is still quite streetable, mainly due to the way the rest of the car is set up. For instance, standard Torana springs and shocks are still used as Geoff finds they give the car a very good ride on the street, soaking up the irregularities on Australia’s famous roads. “We’re thinking of putting in 90/10 shocks and high-lift front springs and will probably play with the back,” Geoff said.

Despite the current street set-up, Geoff would like to be able to leave the line harder. “The car doesn’t take off as well as other Super Sedans and maybe the weight distribution has something to do with it, as 58 percent is over the rear wheels. We need to plant the rear end much more firmly on the track and prevent wheelspin.” 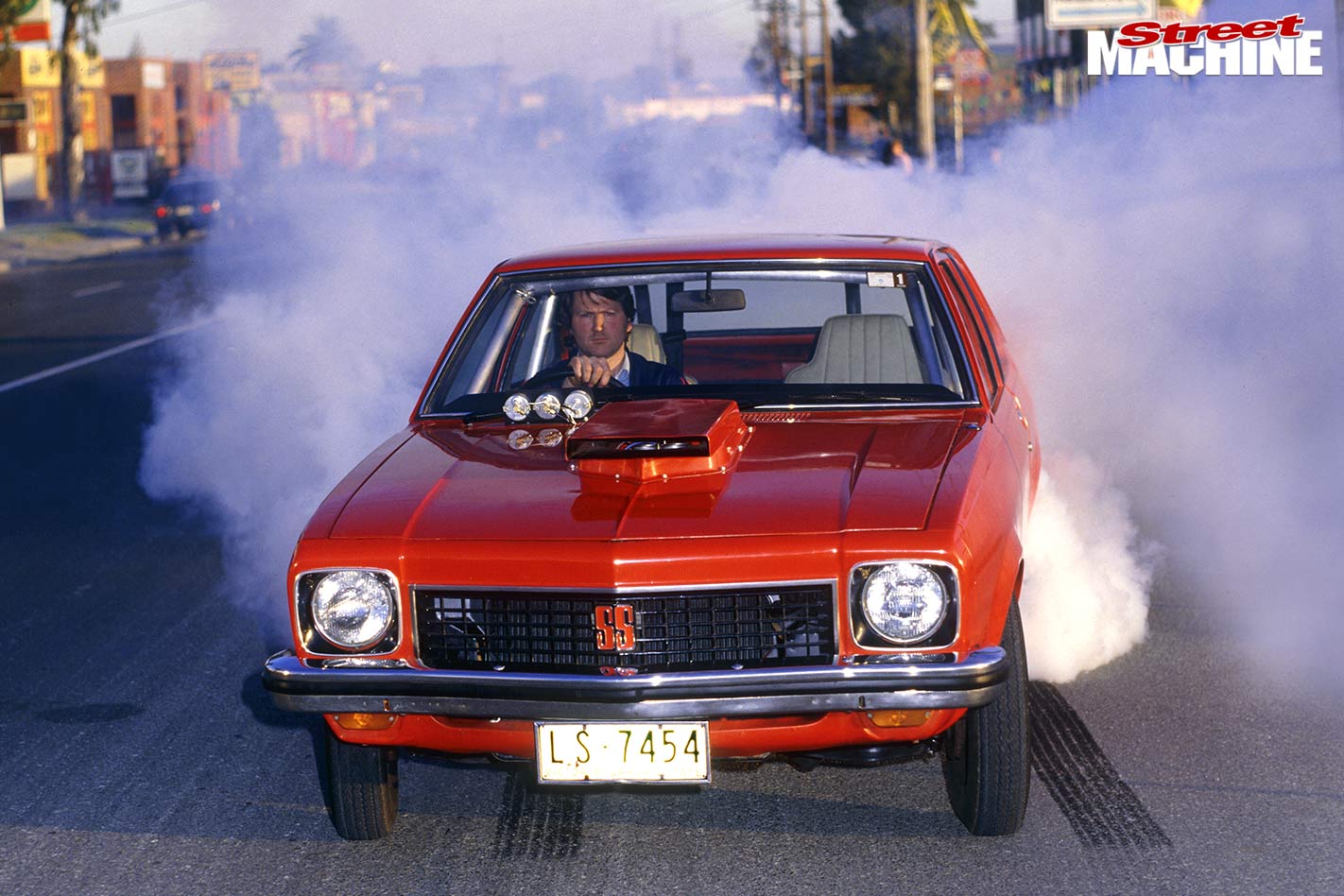 Smoke them bags – 600 horses are unleashed on the tarmac from a very tough, very tight-fitting block

Geoff originally bought the car for $2000 and admits to spending a lot more since then. But it’s money well spent. Even though he had all the parts at his disposal, he found it hard to organise and move on to the next stage. Still, trying to get it down the track faster has seen an estimated 600 horses make their way to the back wheels.

The body is just the same as the day it left the factory, except for the aluminium wheel tubs installed by Shane Cable. The red paint was supplied by Eddie Cianciaruso of Fairbank Panels. He also trimmed the guards to fit in the big rear boots.

The only real give-away that the car isn’t stock is the air scoop on the bonnet and the Auto Meter gauges sitting in front of the windscreen. “I chose Auto Meter gauges as they are so big and easy to read,” Geoff told us. He uses a Mallory rev-limiter tacho and shifts the Lightning Rod shifter when the tacho needle reaches 6500rpm. “It has a built-in light that makes it easier to shift,” he added.

The rest of the interior is basically stock but for a full circuit-racing-type roll cage and a Lakewood four-point seatbelt and window net.

The car rolls on CenterLine wheels with stock tyres up front. The rear wheels are either wrapped in M&H slicks or BF Goodrich T/As. 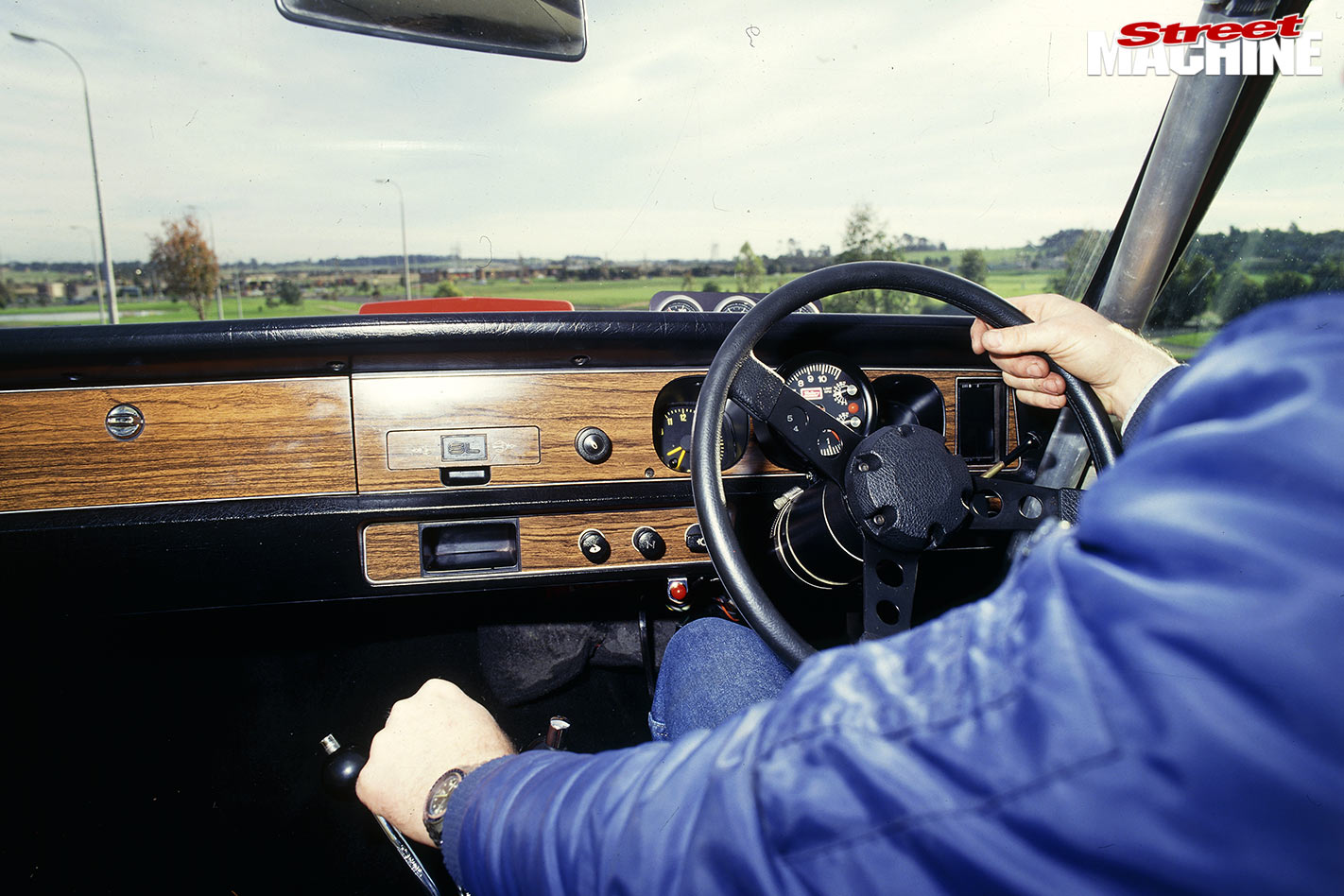 Certainly the whole car looks as stock as a rock, but it is one of the fastest street cars in the country – it’s safe to say only a couple of streeters [in 1985, probably Mark Georgette’s Fiat Hemi and John Craig’s rat-powered ute] would be quicker.

Still, as we’ve said, a lot of parts used in the car are bone-stock and if the ‘big’ motor goes to plan, who’s to say it won’t be the quickest street car in the land. The proof is already there, and if Geoff Paton has anything to do with it, you can bet your mufflers one of Australia’s sharpest cars will become even quicker. We’ll be watching!