Mark Sanders' Holden HK Monaro was tuff, street legal and, despite first appearances, well ahead of its time

DECEPTION has never been so sweet. At first glance Mark Sanders’ Heatseeker HK Monaro looks like a super resto job with a trick set of Center Line billet wheels and some low-profile Goodrich gumballs. The paint’s stunning but, hey, blue metallic was old hat the last time Status Quo hit the Top 40. And does anyone still do chrome bumpers in the 1990s? Same deal with the interior. We’re talking stock HK here, right down to the taxi strip speedo and crappy old AM push-button radio. 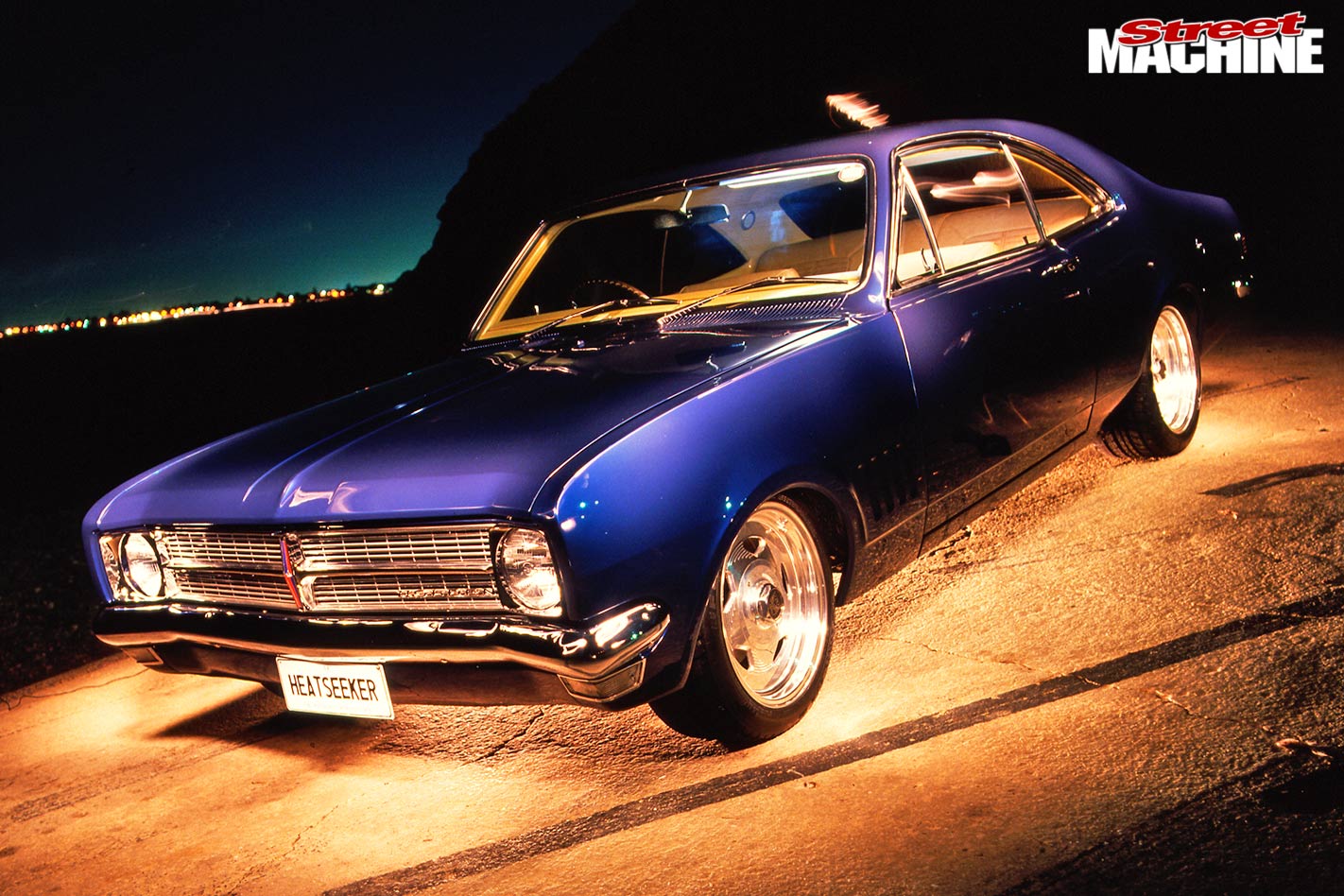 But things start to get interesting under the bonnet. The chrome look might be back to the 70s but the 396-cube Chev big-block is fully legal in Mark’s home state of South Australia and runs an eye-popping array of four 48 IDA Weber carbs atop a modified Moon manifold. It’s mostly stock otherwise, apart from a Heatseeker Stage II hydraulic cam and lifters, and a set of headers dumping into a drainpipe-sized dual exhaust system. That’s okay – big-block mumbo is usually more than enough for all but the most seriously hooked horsepower junkies. 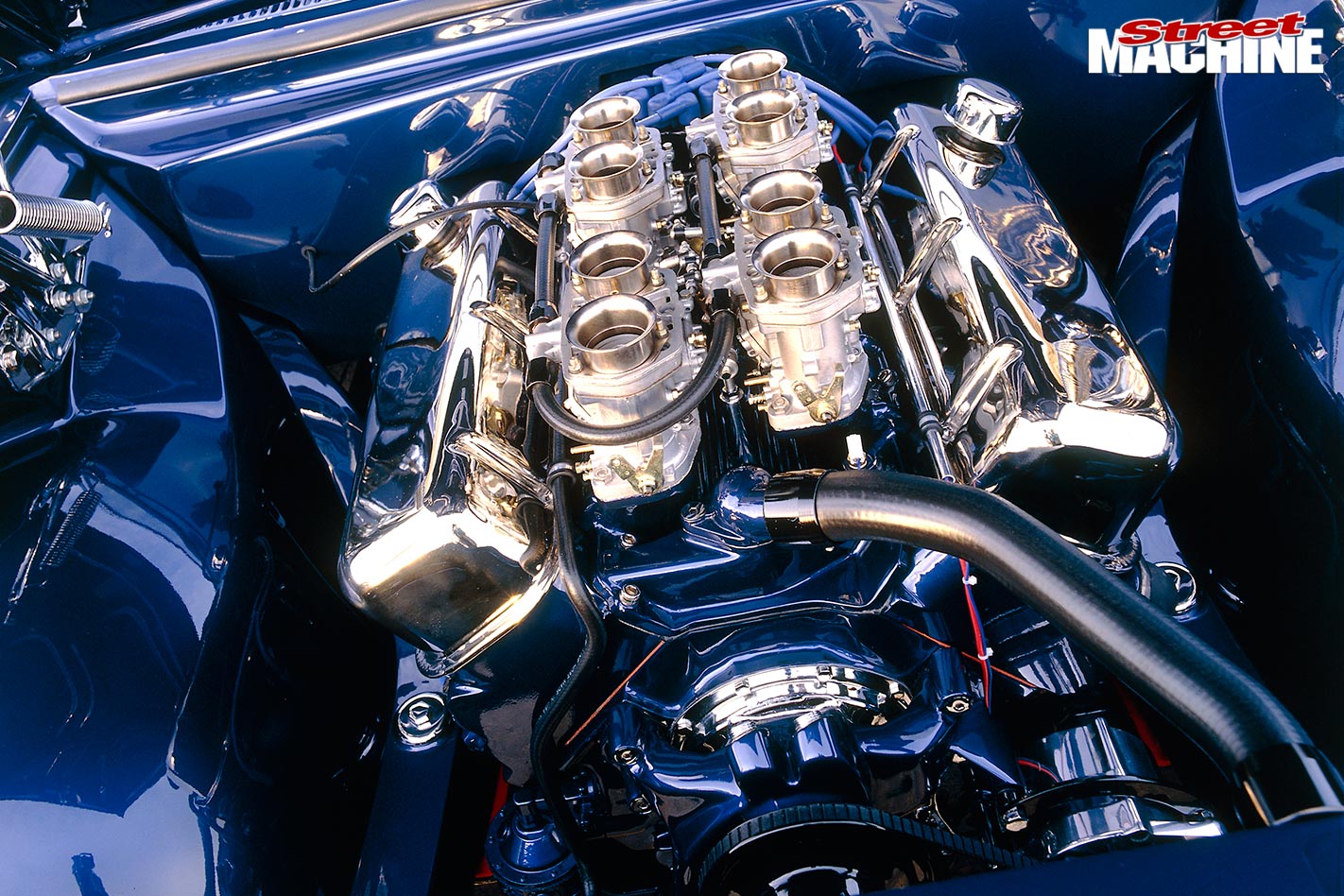 Go down on one knee for a look underneath and - Jesus! Fabricated chassis, flat floorpan, fabricated front crossmember with stainless steel double wishbone suspension and coil-over shocks, rack and pinion steering, a custom-built nine-inch tied down by a hand-built four-link suspension with more coil-over shocks, four wheel discs… Right about now your neck’s on fire and you’ve worn a hole in you Levis. Turn around and you’ll probably see Mark grinning ear to ear. Gotcha!

Most guys put the trick stuff in your face. Mark built his inside-out Munro just to be different – as a rolling billboard for his Adelaide-based chassis-fabrication shop, Road Performance Modifications. 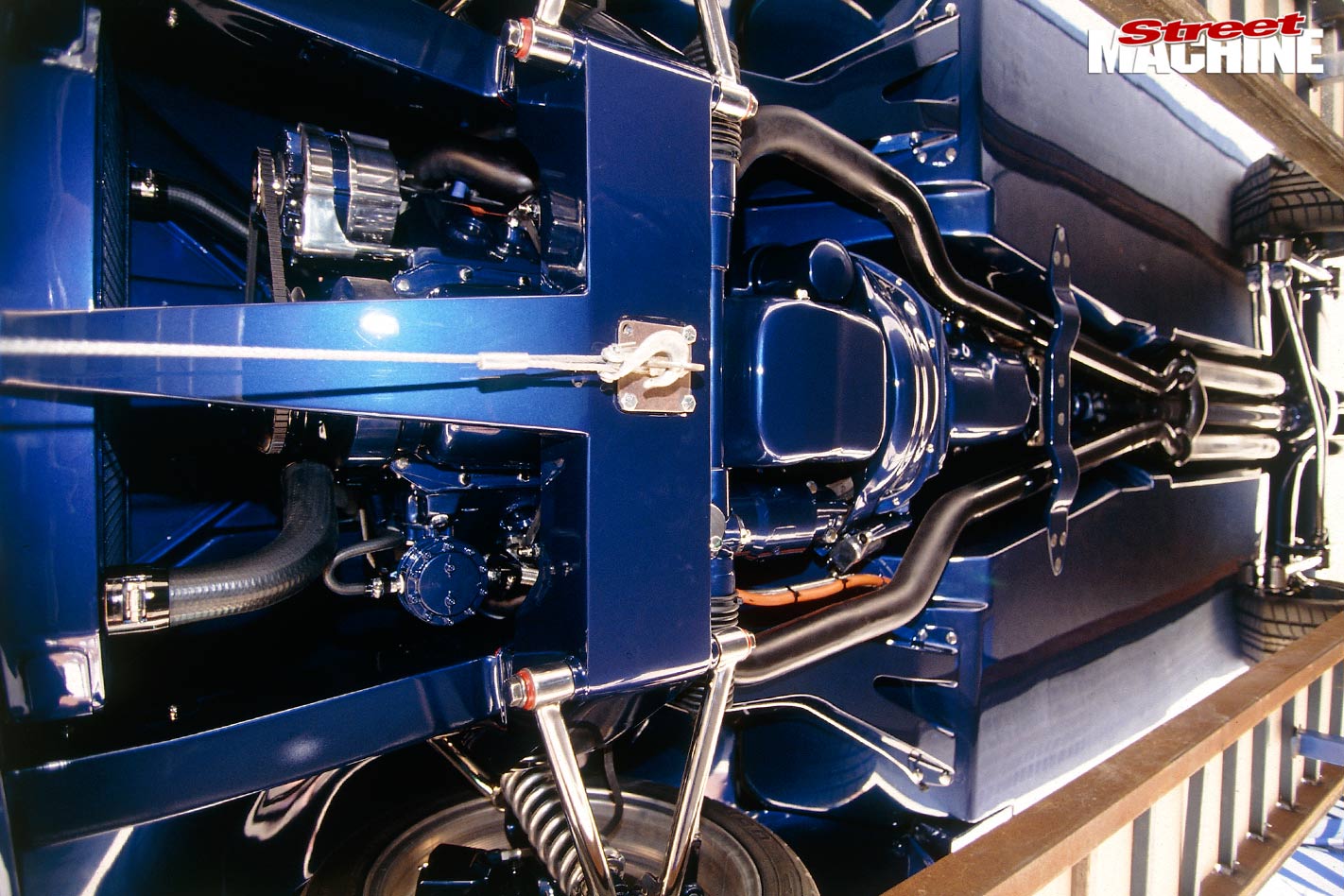 Chassis detail is spectacular. Trick front end and the rest is SA legal

It all started with the paint.

“The colour gave the theme to the whole car,” he says. “I wanted a metallic because I thought it would look good under lights at shows.” Mark went through reds and greens before deciding on blue. Originally, he thought the original HK blue would look good but it just didn’t have the punch. The solution was a Spies Hecker Monza Blue Variant 1. 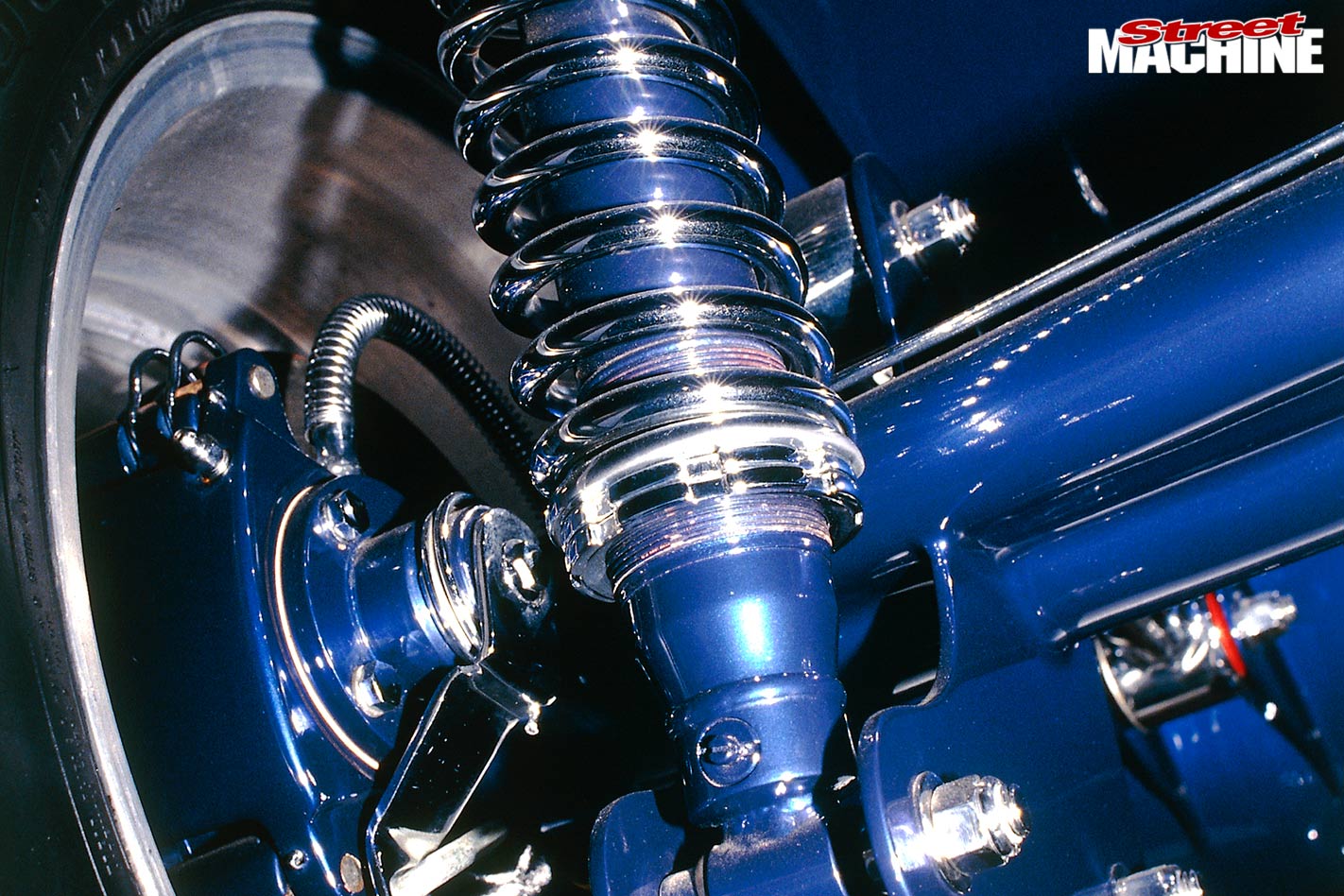 Although the final colour choice wasn’t made until a year into the 21-month build-up, playing with the original HK blue gave Mark the idea of keeping the panels and the interior original as well. “The car is an evolution,” he says. “Inside, it’s a full restoration. Outside, it’s a lightly modified restoration. Under the bonnet, it’s a contemporary street machine. And underneath it’s a full-on hot rod. There’s a transition from one area to another.”

What’s clever about this car is how Mark’s worked around SA’s tough modification laws. You might not believe it, but there’s a lot of original floorpan still there – Mark has simply sandwiched it between 16mm custom wood sheet on top, and 1.2mm cold-rolled steel sheet underneath. That way he’s managed to keep the rego boys happy and get a state of the art show car into the bargain. 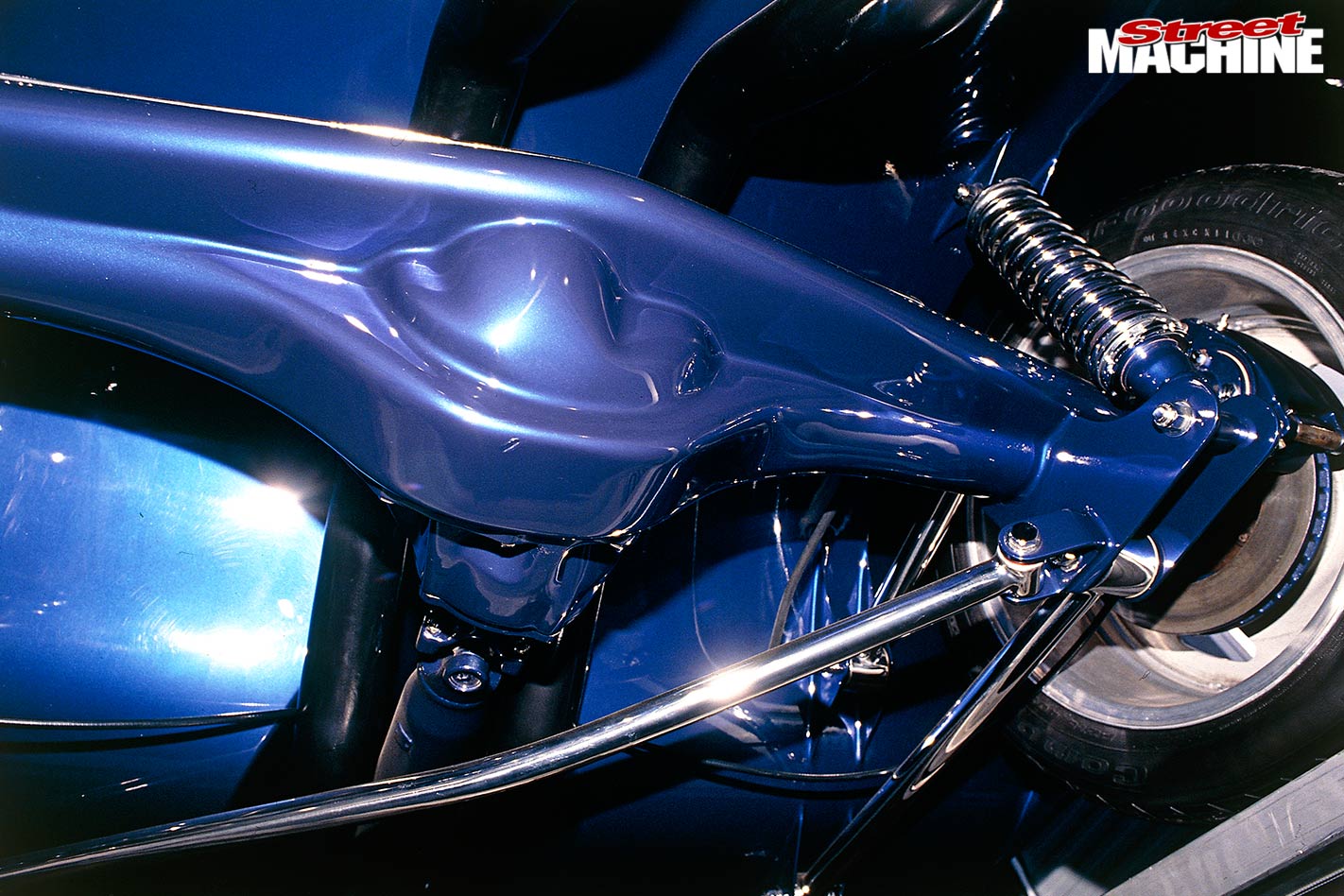 Even the exhaust isn’t quite what it seems. Only one of the three-inch exhausts is fully functional – the other is blocked off just behind the balance pipe. The remaining pipe is divided into eight compartments and features a 50mm inner tube surrounded by sound-deadening material, to keep the noise down without using bulky mufflers. So, why two pipes? Mark reckons it looks better, that’s all. And if we hadn’t told you, you would never have guessed…

Mark fiddled the geometry of that trick double wishbone front end to get it just right. Castor and camber are about the same as stock, but the roll centres and ride height have been changed. Brakes are XA Falcon with HQ calipers and the hand-built crossmember is more or less similar to the original, bolting into the original mounting points. Again, this is needed to get the car past rego. 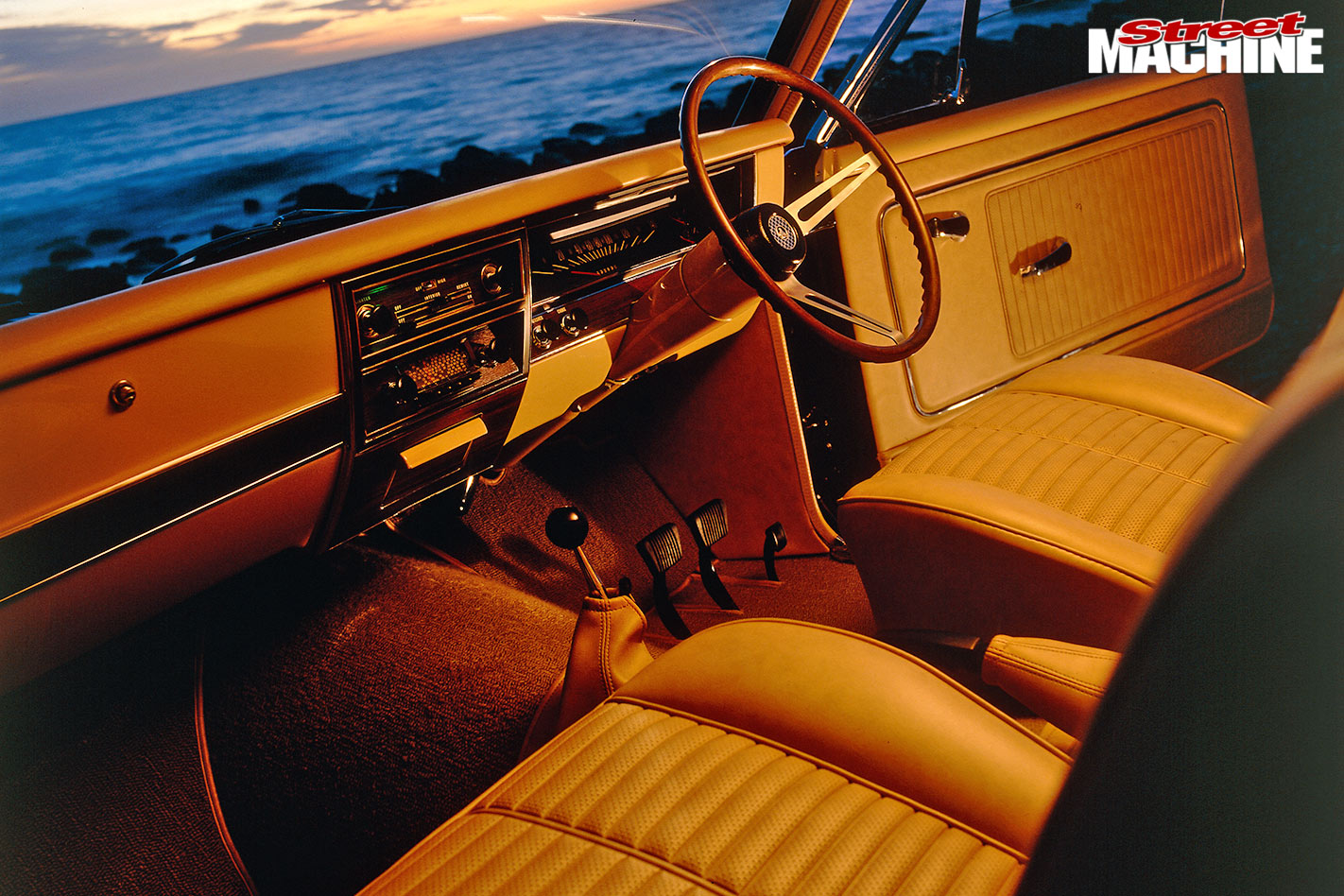 At the rear Mark grafted custom-made axle tubes onto a Ford nine-inch centre with a 3.25:1 final drive, and even made special brackets to hide the bolts that hold the XD Falcon calipers in place. The mounting brackets for the four-link rear end are integrated neatly into 75 x 50mm box steel chassis. If you reckon that sounds like a lot of work, you’re right. Mark says there’s at least 12 months’ worth of fabrication work alone in the Heatseeker Monaro.

The result’s a unique streeter that doesn’t quite fit any of the usual pigeon holes. In fact, even the Summernats judging team found it hard to believe the car qualified as a Pro Streeter, even though it met most of the technical requirements for the category. And that’s the way Mark wants it to be. “I think of it as being behind the times or ahead of the times,” he says. “I was just trying to please myself and build a car I liked.” 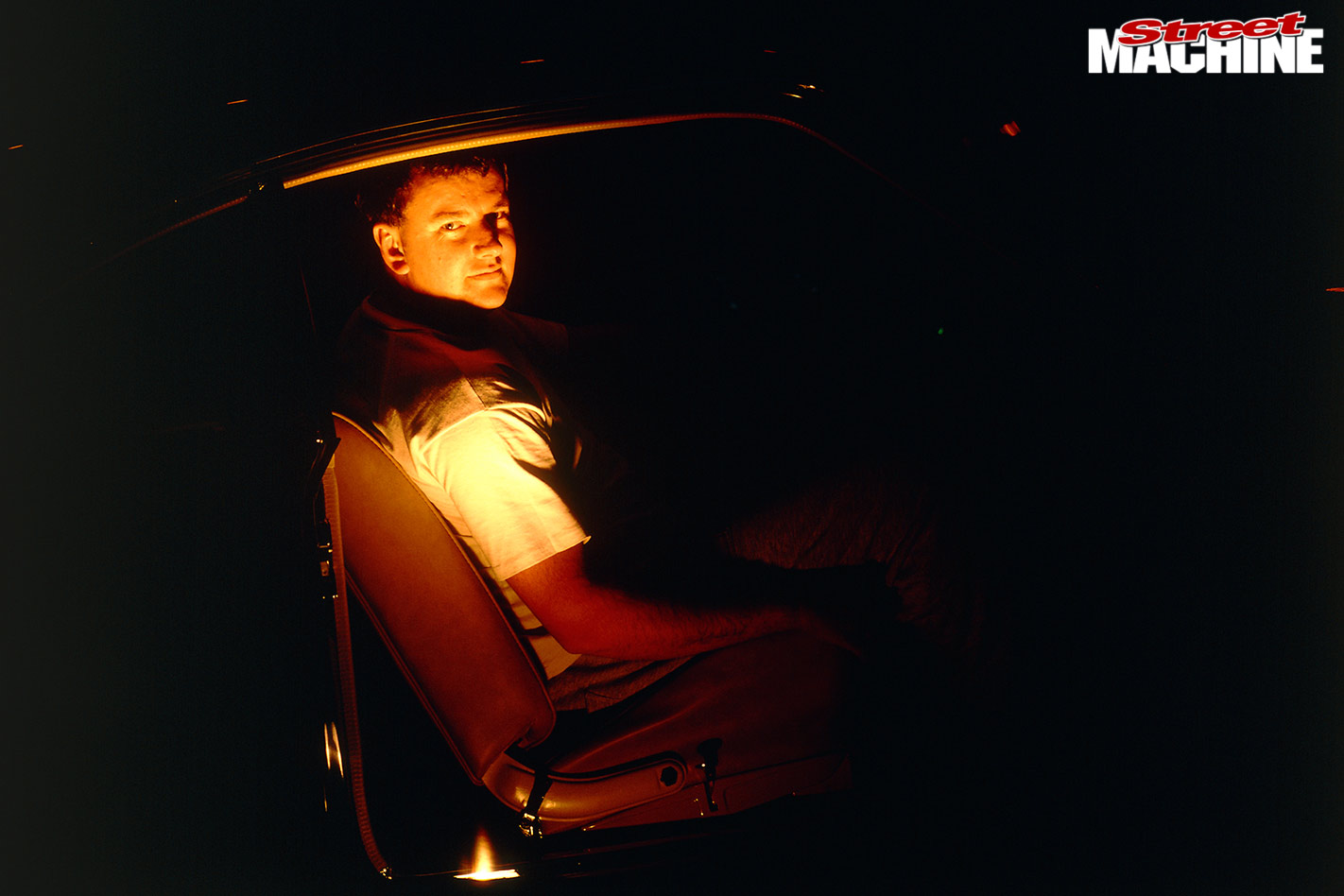