After 13 years of advancement, Jeremy's VB Commodore stands tall as a five-second, 4000hp Grudge Kings-smashing hulk. Here's the full story on his beast, as published in the September 2018 issue of Street Machine

HAVING run 5.98@246mph, Jeremy ‘Jet’ Martin carries the keys to Australia’s quickest and fastest Holden Commodore. But this 4000hp, Pro Line Racing 481X-powered brute started off as a very different creature. Jet actually purchased the ’79 VB for a grand back in 2005 as a 253 thong-slapping street car, and quickly decided to start experimenting with combos. 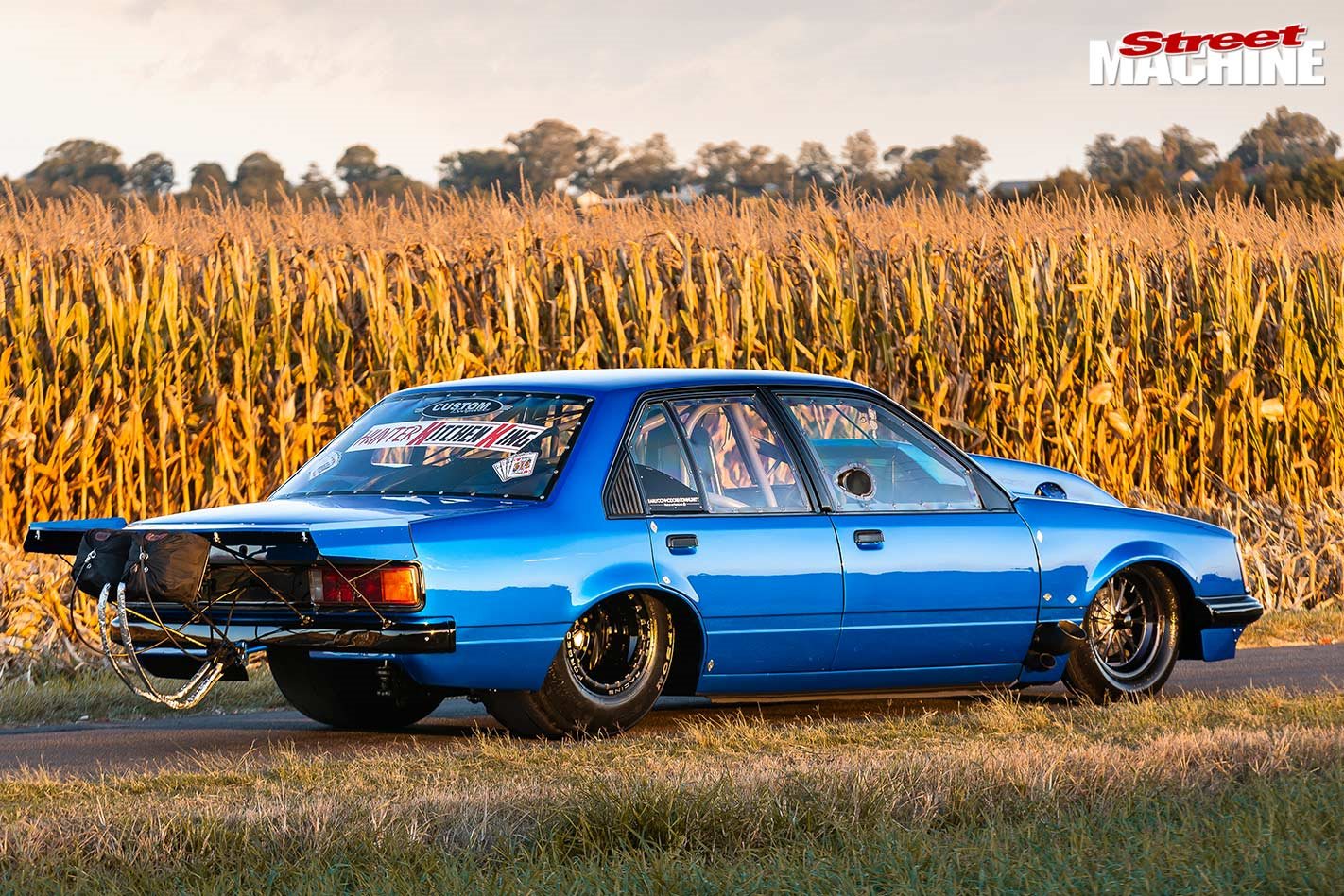 Jet has had some crazy complications with the bodywork at speed. “We haven’t done much aero work, but aero is half the reason I went to the one-piece front end, as the car tries to rip itself to pieces,” he says. “At 247mph the tops of the doors start to blow open! I’ve blown out the rear window, the passenger door, the bonnet, and the driver’s door and window. I got an Alfa Fibreglass one-piece front end to stop it blowing apart, and they admit they never thought their parts would be going 400km/h”

“I bought it off a co-worker as I had a hotted-up a VR HSV GTS and was wrecking it by thrashing it around,” says Jet. “The plan from the outset was to go fast. I did my apprenticeship at a shop specialising in street/strip and speedway builds, so we did a lot of supercharged V8s, but no turbos. So I wanted to try that out as turbos are like free horsepower.” 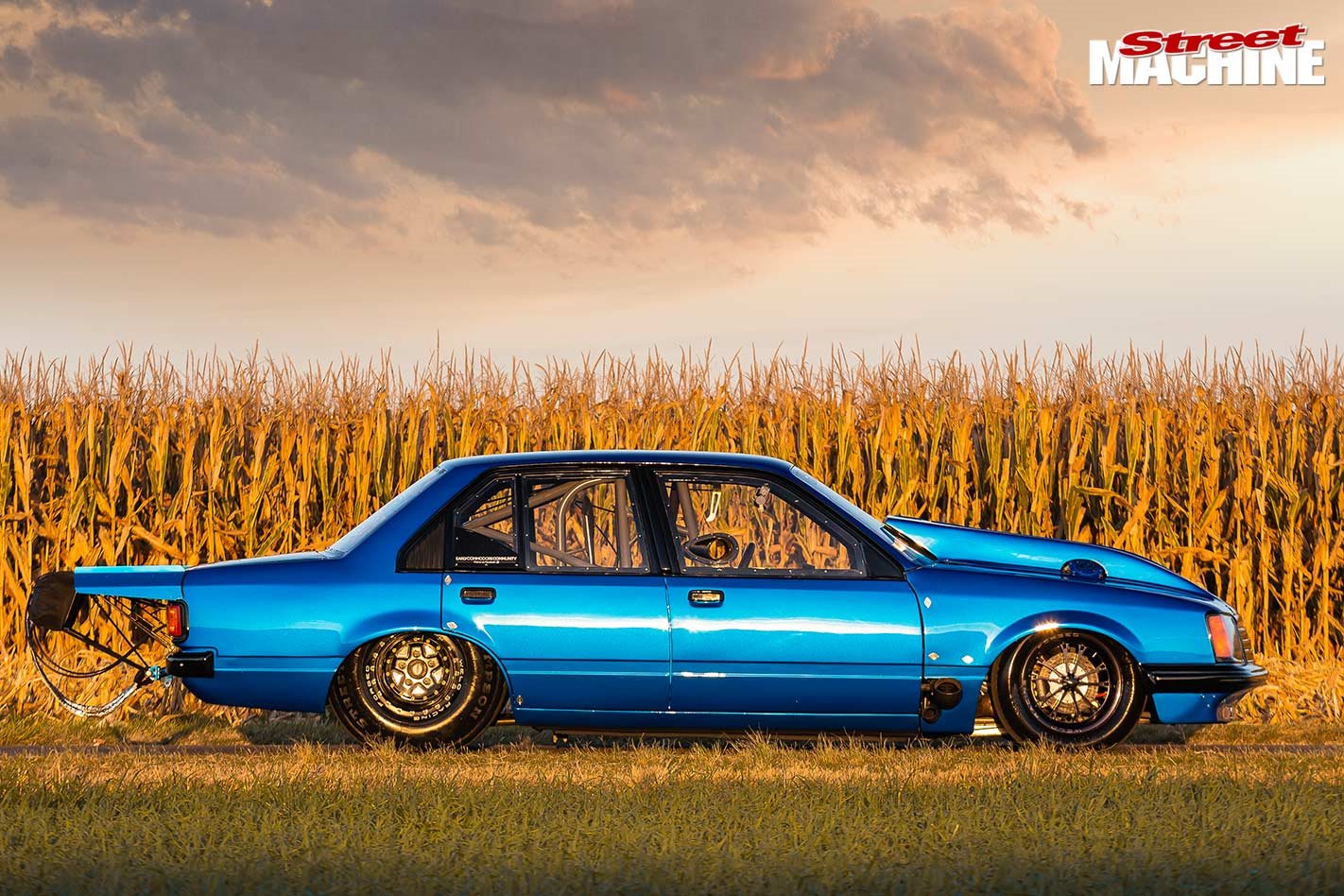 Without a 14/71 hanging in the breeze, Jet’s car looks quite mild at a glance. “With the tyres tucked right up inside that original steel rear quarter, the car doesn’t look like it does fives, but it is basically a twin-turbo Doorslammer,” Jet laughs

He jammed in a turbocharged roller-cam 5.0-litre from a VT Commodore and did an impressive 11.8 on its first run, getting down to a 9.0 with a stroker motor. The next step saw the car’s first great evolutionary leap thanks to a Dart Big M-based 540ci Chev combo built by BK Race Engines. 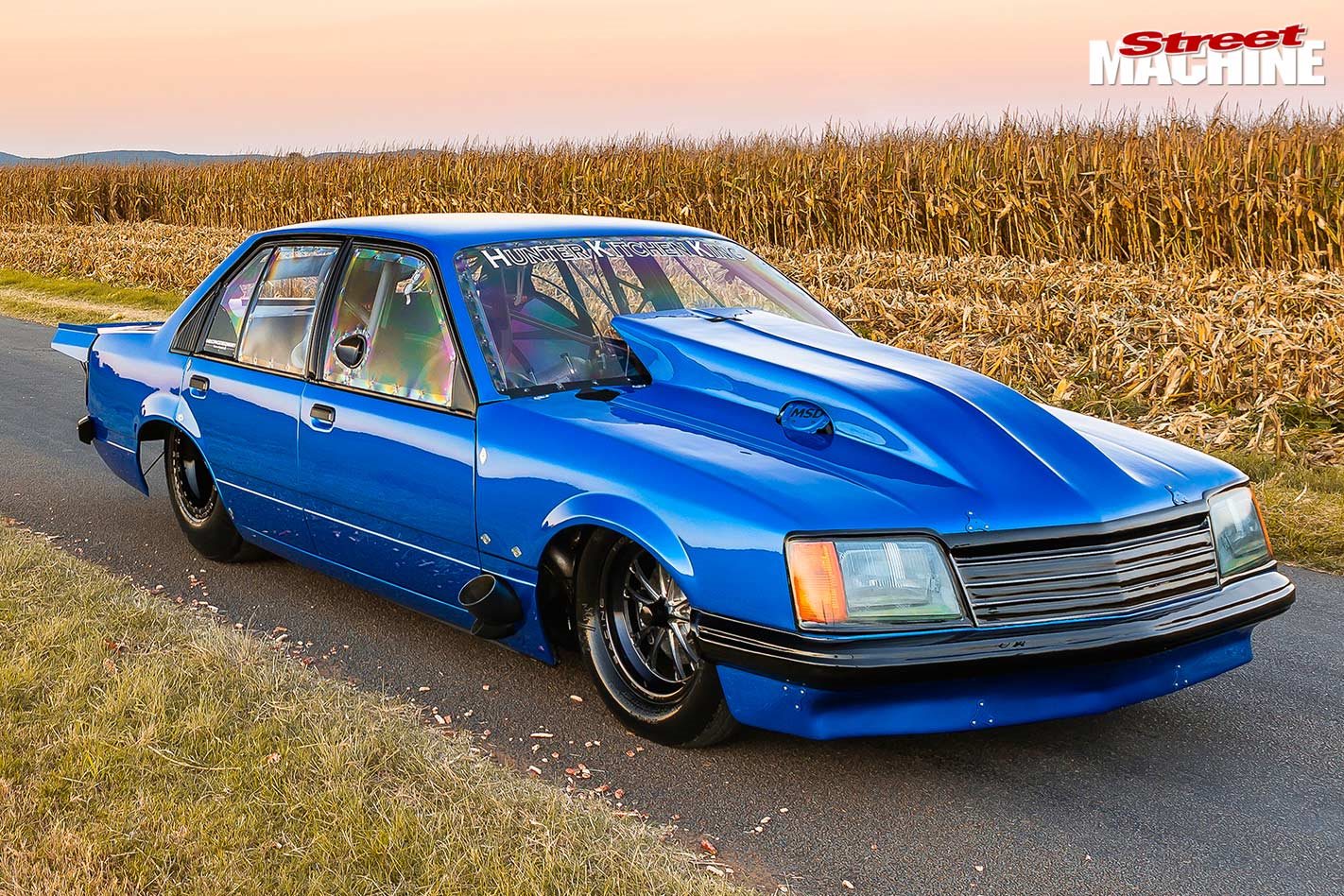 “I was going to run in the Mod Street Blown class, but I needed to rebuild the Holden engine, which was making around 1000hp,” Jet recalls. “At that time I was talking to BK Race Engines about using their engine dyno, and I ended up realising I could get 2000hp out of a big-block Chev.

“I actually drove it around town as a single-turbo, mini-tubbed car a couple of times, and then took it to Craig Burns at SCF Race Cars for a fuel tank. He pointed out how much power I had and suggested I really needed a rear clip and ’cage to be safer.” 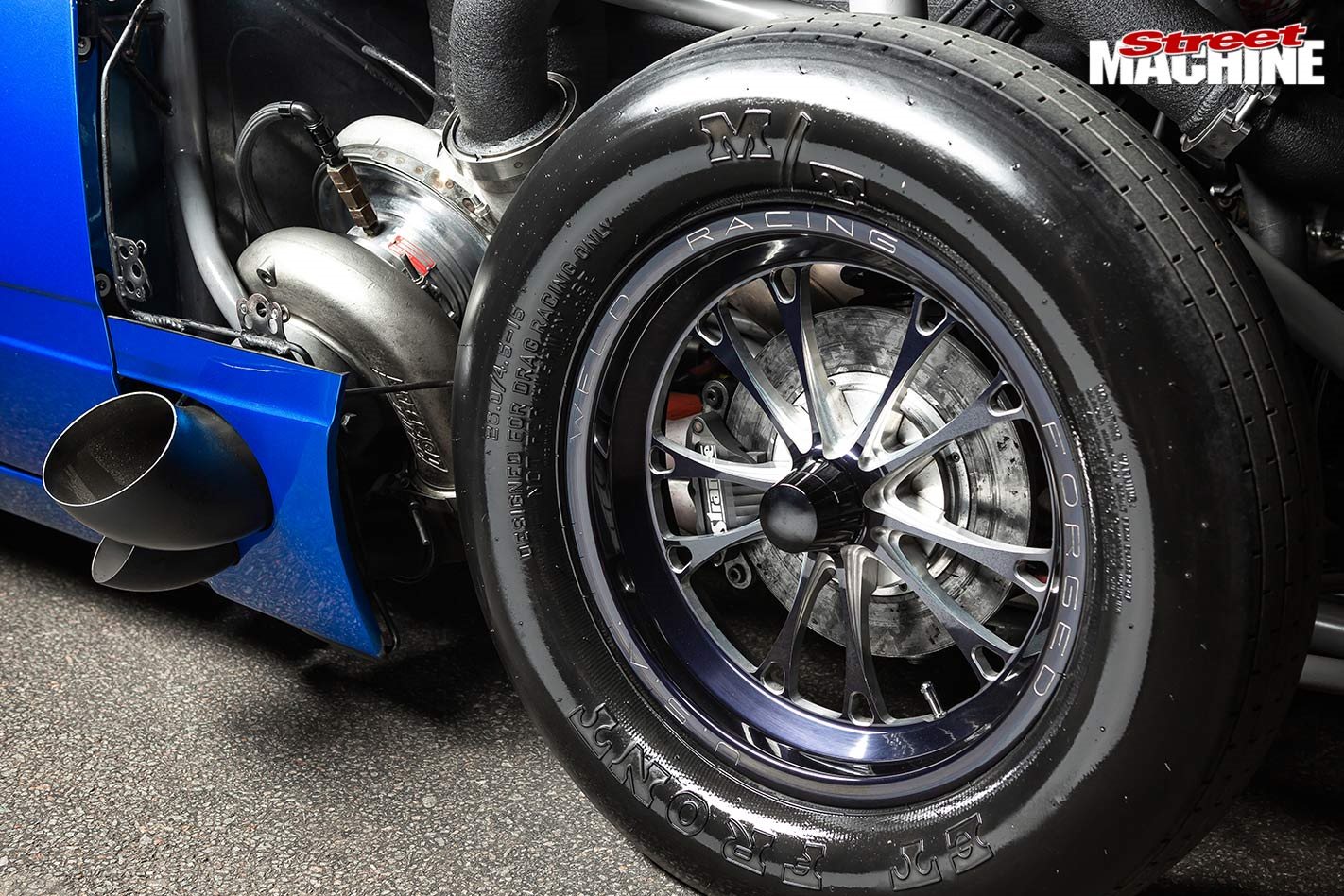 With a big single turbo, the 2000hp big-block pushed the mid-sized sedan to 6.9@204mph. However, Jet saw the appeal of Outlaw 10.5 racing and knew he would have to really step up the car’s evolution to compete. 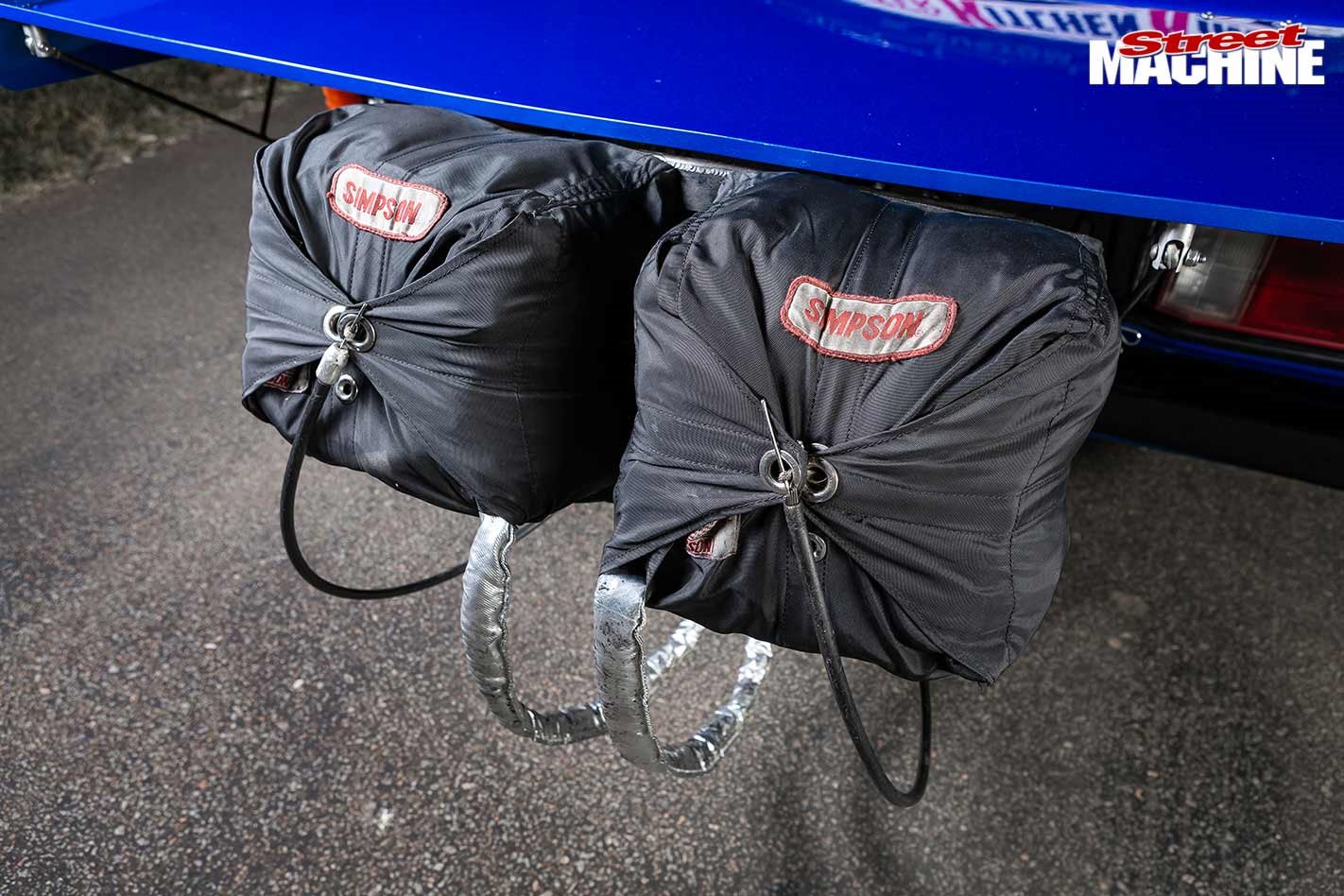 “I had wanted to run a 6.90 with the VB using the Chev, and I did that,” he says. “At the time the leaders in Outlaw 10.5 were running 5.90s, so I made the decision to push the development of the car further with the help of Craig. I took the car to him and said we had to cut off the factory front end from the front seats forward, as that was pretty much all that was left of the original chassis.”

The VB got friendly with SCF’s plasma cutter and now runs a three-quarter chassis, but it retains the original GM-H steel roof, quarter panels, pillars and sills, not to mention the OG tail-lights and steel rear bumper. 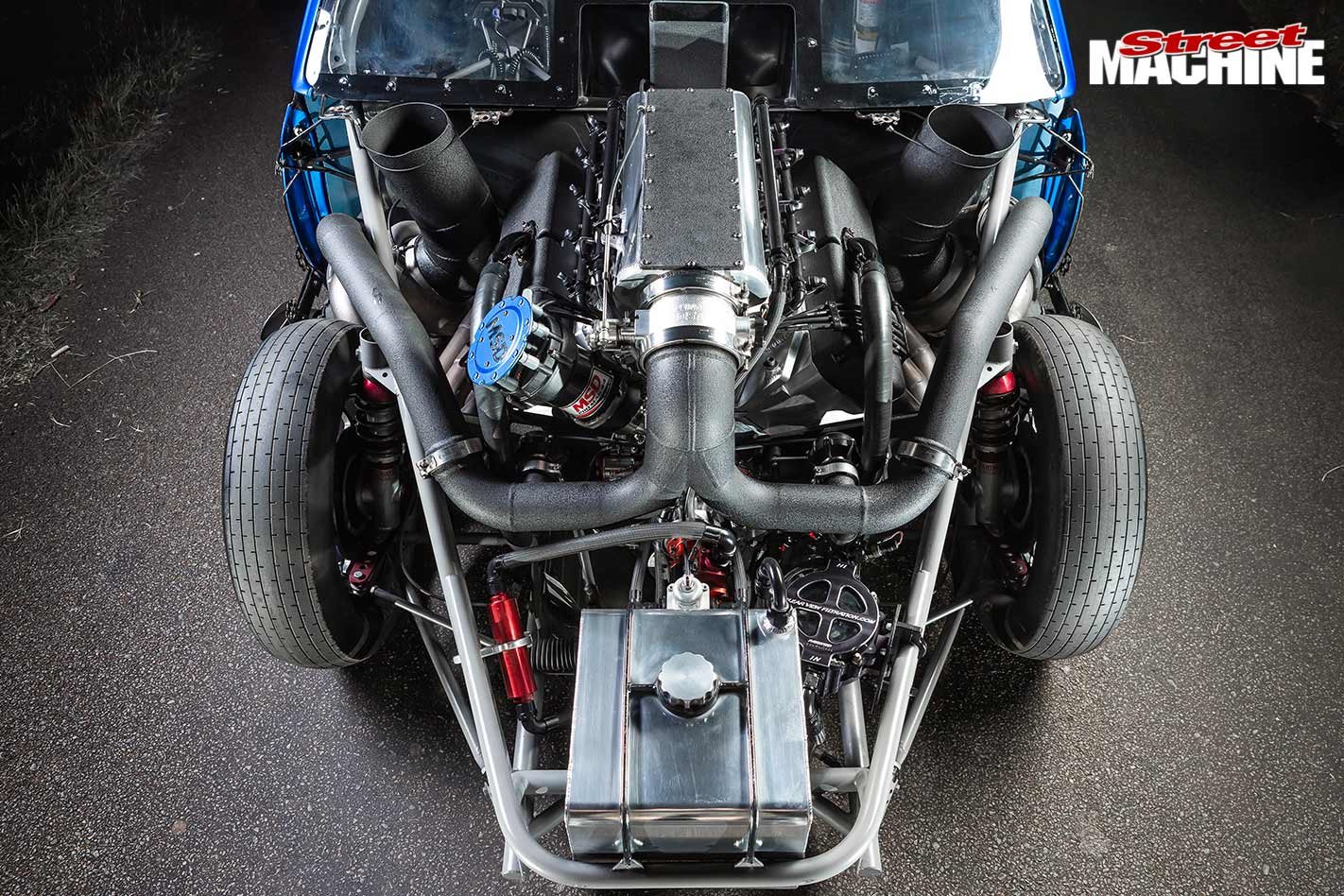 There are options with the Pro Line Racing 481X packages, including having your crank splined or keyed, choosing between PAC or PSI valve springs, plus Dailey remote billet or System 1 billet wet-sump pumps, RCD crank trigger and mag drive, or optional magneto eliminator should one choose to go coil packs

At the same time that SCF was pushing the VB’s chassis package to a higher level, Jet went shopping for a new motor, and he didn’t muck around. 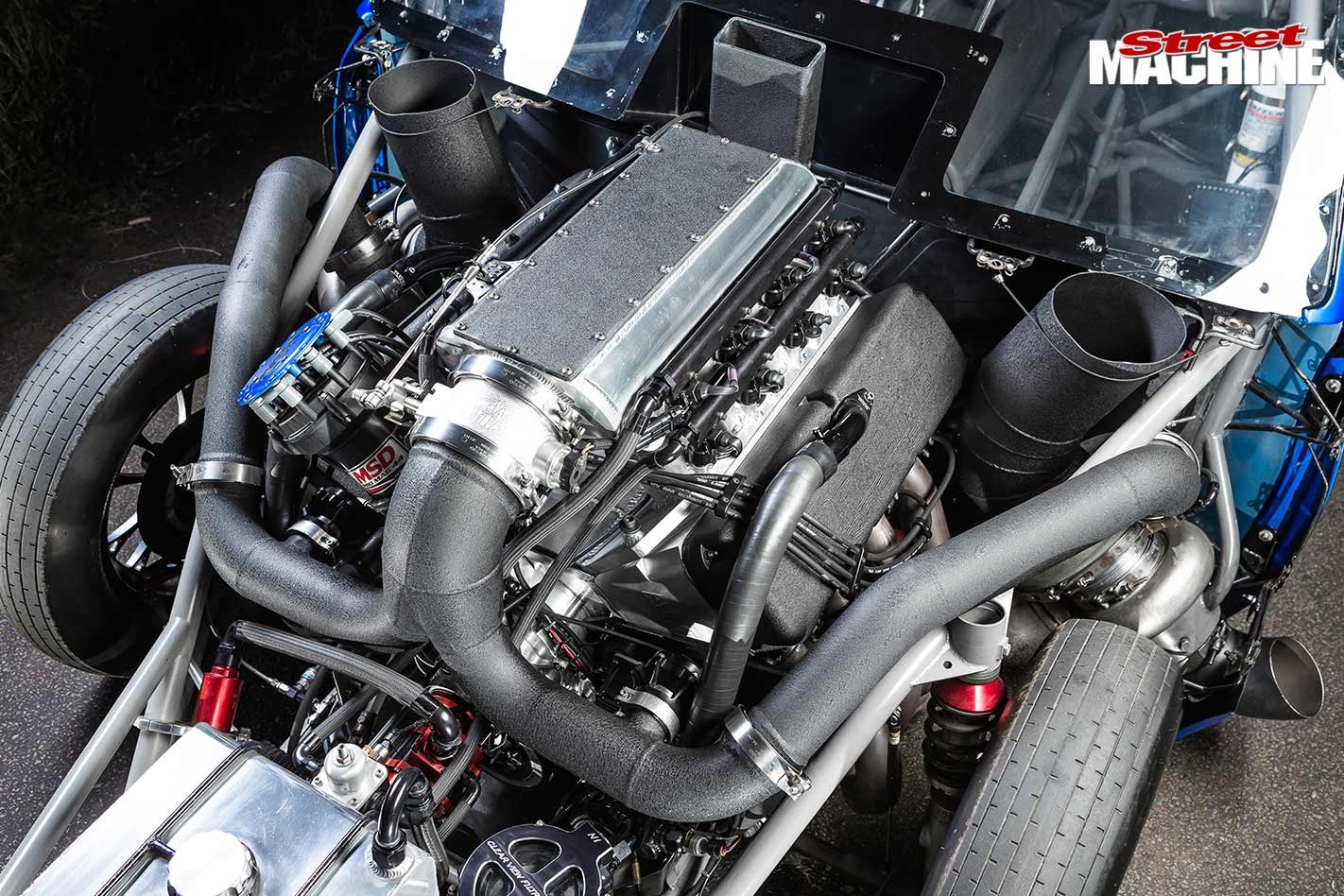 “I could barely afford to build the car once, so I knew I couldn’t afford to build it twice by having to redo things later on,” he says. “I knew I had to step up to a billet block, and I knew the Pro Line combo was the fastest turbo package in the world with the Q80 Camaro.”

Jet picked up one of the drool-worthy billet 481X engine combos from the Pro Line Racing guys in Ball Ground, Georgia, USA. Running on methanol, the twin-turbo 526ci motor makes approximately 4000hp and is one of the most desirable set-ups to be found between the frame rails of a 10.5 car. 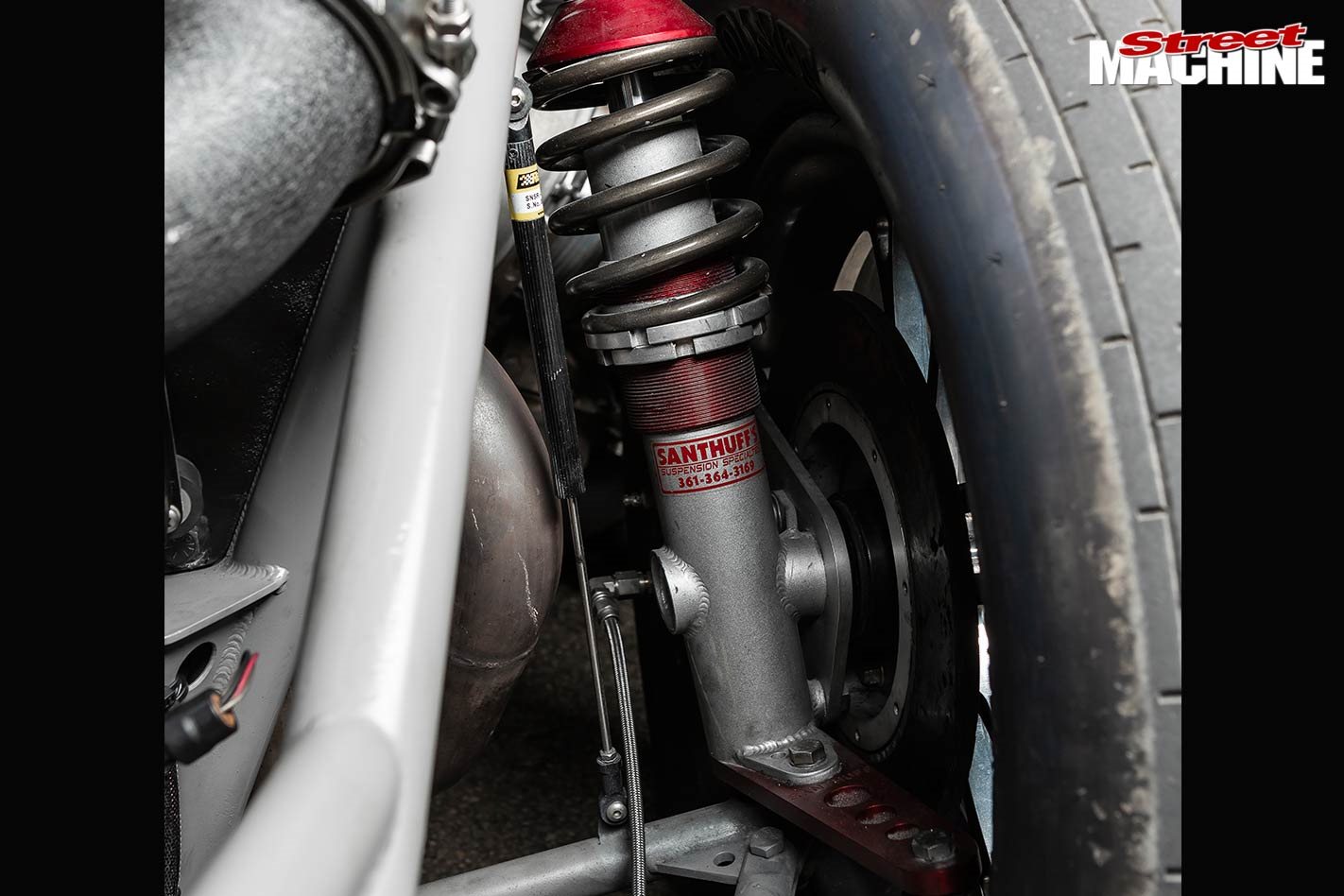 The VB rides on adjustable Santhuff coil-over struts up front, with Menscer coil-over struts in the rear end. SCF Race Cars handled the mounting and fine-tuning, while also making up the tube control arms and sorting the steering

Originally designed by Alan Johnson Performance Engineering (AJPE) for use in blown Top Alcohol-class cars (check out Mill of the Month, page 154 for more info), Pro Line redesigned the billet aluminium set-up for use with turbo combos. 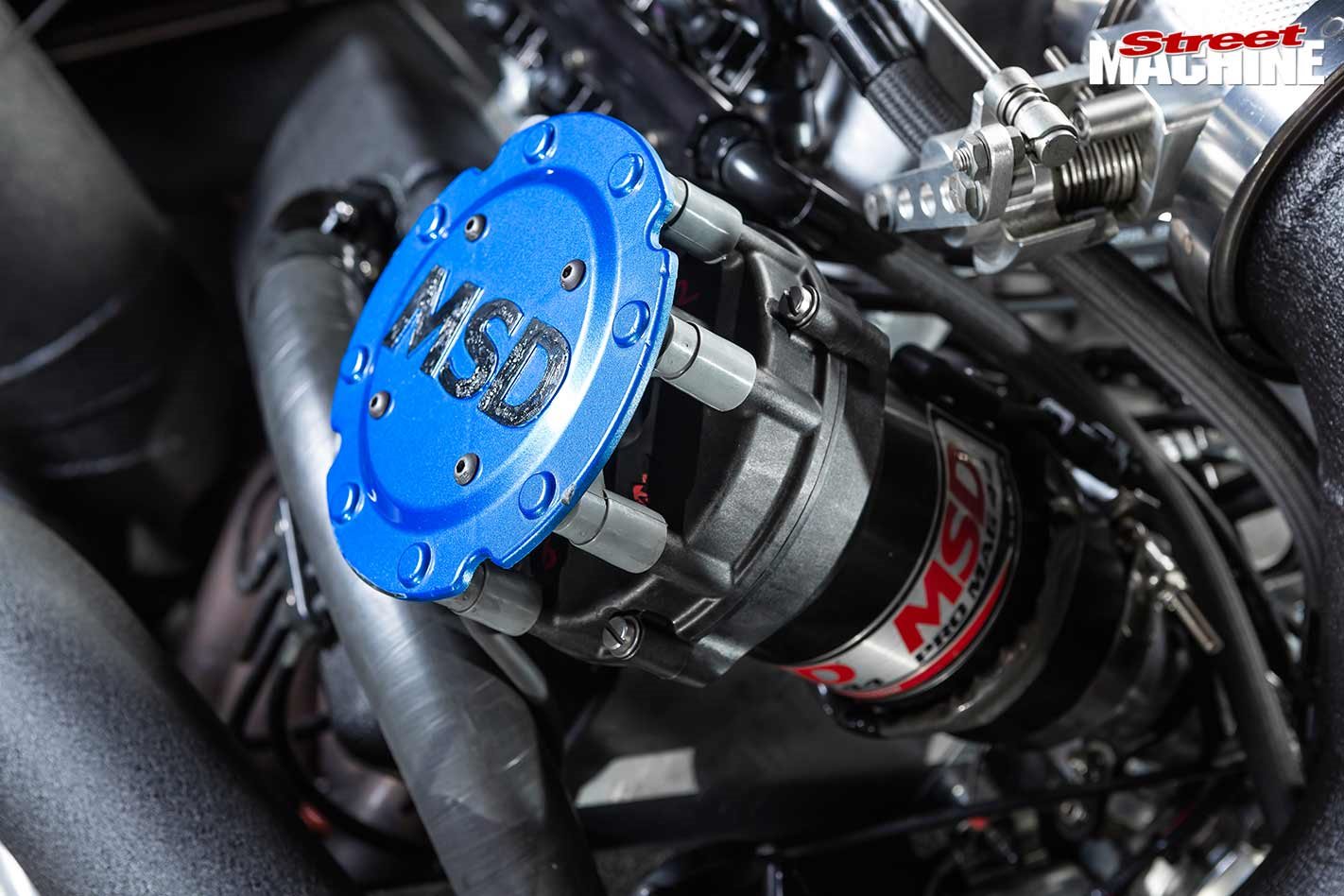 Sucking methanol, a Waterman mechanical fuel pump feeds 16 Billet Atomizer injectors flow-rated at an insane 7350cc per minute, while Aussie-made Turbosmart wastegates keep the boost from the pair of 98mm Precision GEN2 turbos where it needs to be. Boost, fuel and spark from the MSD Pro Mag are managed by a FuelTech FT600 ECU and data package. 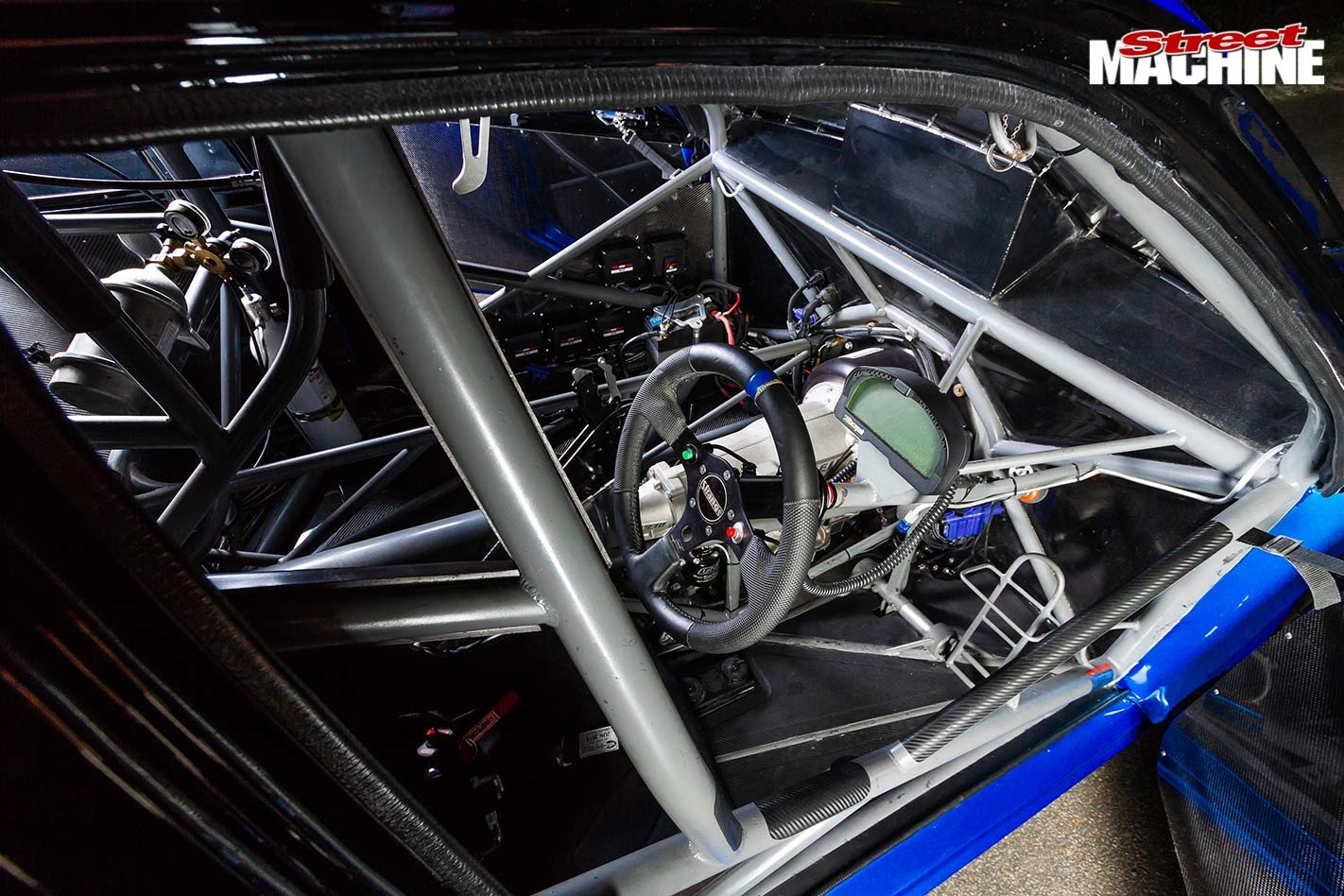 Jet wanted to feel like he was in a race car, and the Funny Car-style ’cage by Craig Burns at SCF satisfied that urge! “I wanted it to really look like a race car, and it does with that exposed gearbox!” says Jet, noting the change from previous incarnations. “Even when it went 6.90 I had the factory dash and carpet in it, and it still has a hoodlining in it!”

The 481X is a huge investment for a bloke like Jet, but part of the attraction isn’t just raw horsepower but after-sales support from the Pro Line guys.

“After every 50 passes I do rods and valve springs, then the next 50 is a big one with valves, lifters, retainers, collets, rings and bearings and things like that,” Jet explains. “I can’t speak highly enough of Pro Line. They even have their own race maintenance printout sheets to help you, and they go above and beyond to help us. 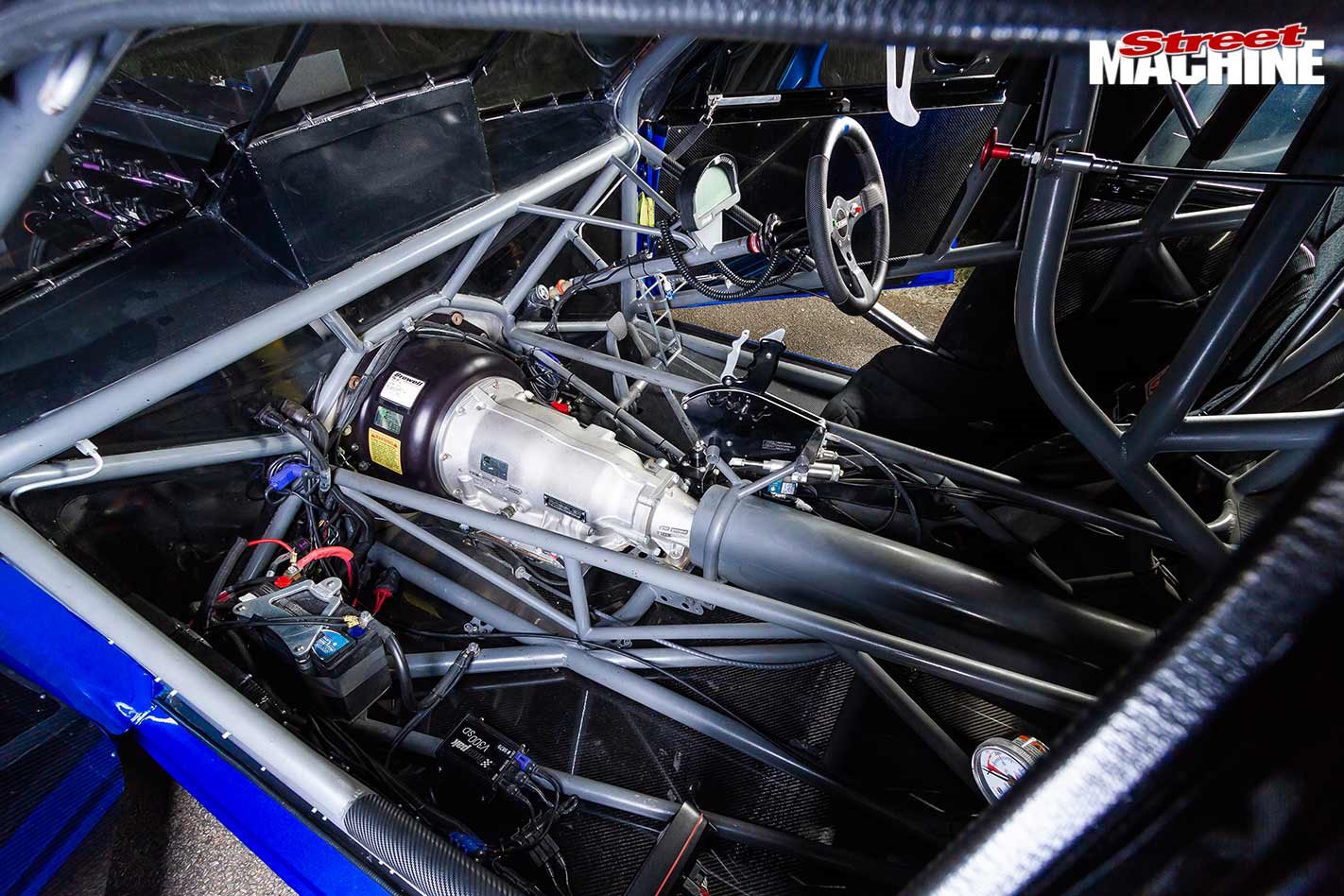 “We have stayed with the same engine, turbos, converter, diff, gearing and overall combination that got me into the fives, and that was always the intention as I didn’t want to have to go through it multiple times. We have stepped it up with more boost and refining the tune as we got a handle on the car.

“We got the car doing around 6.40s and it was around that time a heap of Pro Line guys came out to help Moits with their black car. We had a week at Sydney Dragway where we hooked up with those guys and within a couple of days the car had run a 6.1@236mph.” 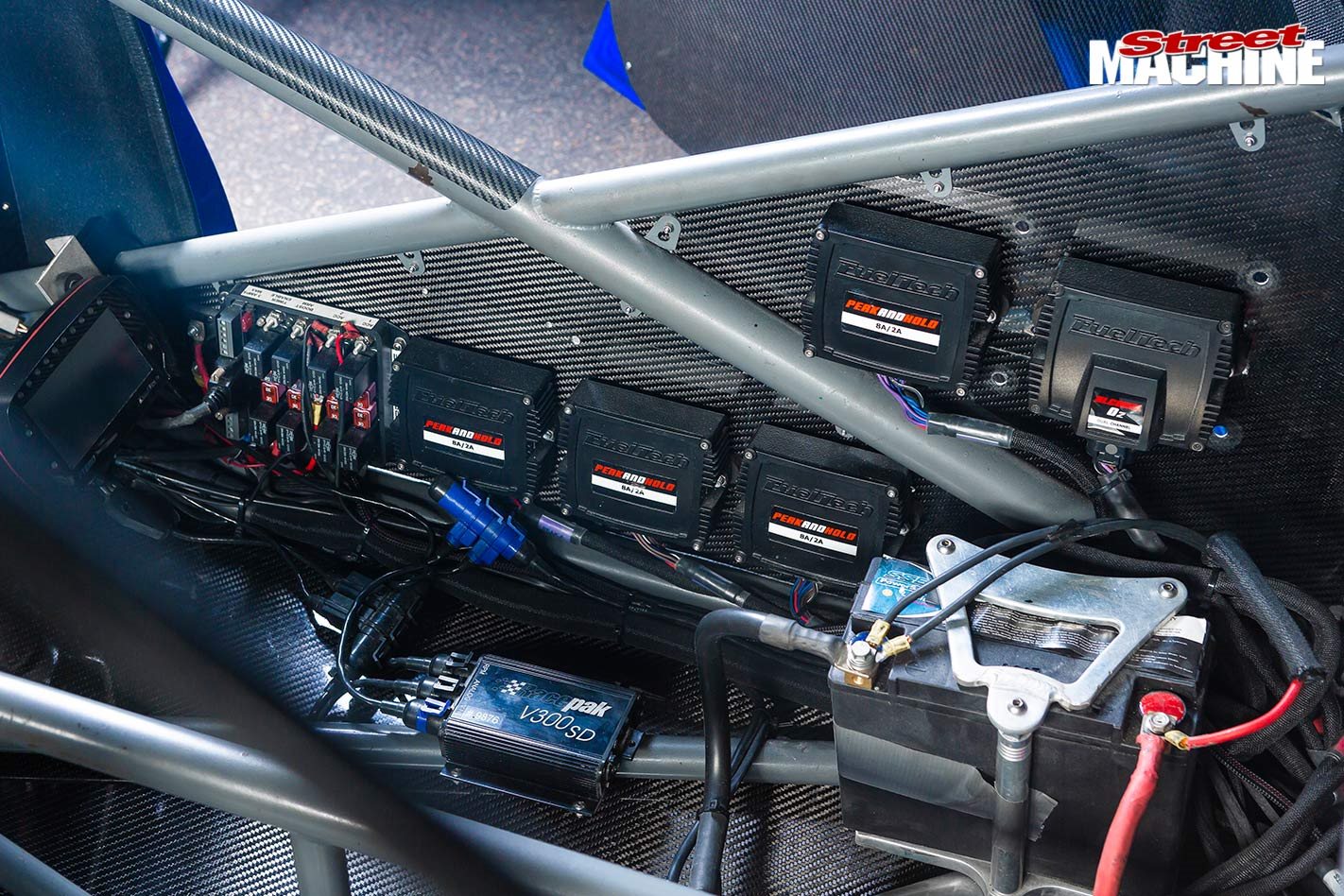 Jet knows that data is key to going fast, and he is stoked with his new ECU package. “The FuelTech computer in it means I can download a run, email it to my tuner Josh, and he can adjust it, then get it back to me in 15 minutes. With the FuelTech you can send as much information as you want, which makes it simple”

Behind the meth-guzzling donk is a Meziere billet flexplate and Coan 5000rpm converter, along with a Rossler manualised three-speed TH400 auto. 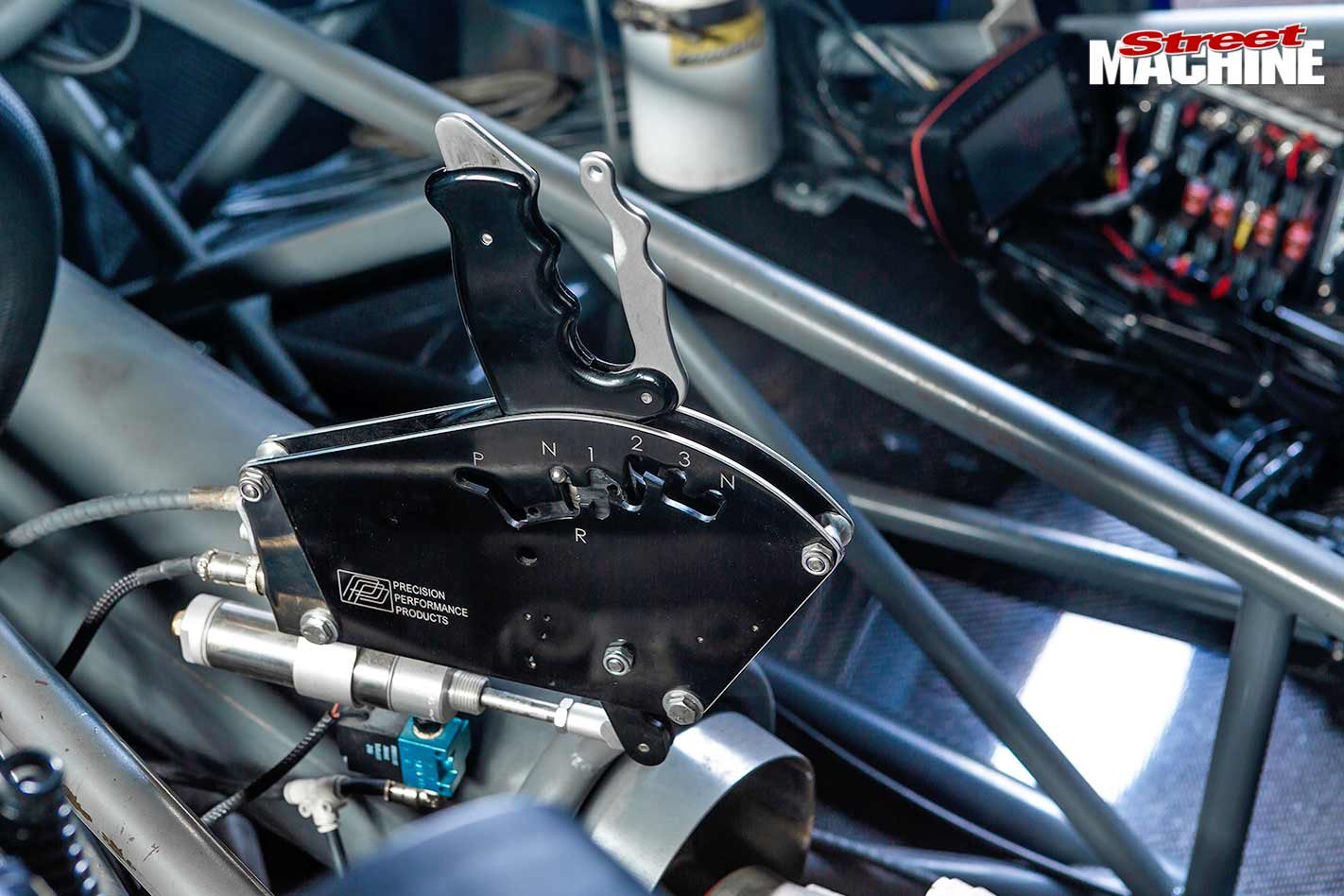 “I got talking with Eric Dillard from Pro Line and we came up with the ratio package in the whole car,” Jet explains. “The first two gears in the TH400 are for eighth-mile, and I use third gear just for getting the car from the eighth-mile to the quarter-mile.”

Against one of the strongest fields in recent memory, Jet only needed his first two gears to take out the Sydney Grudge Kings meet this past July. While that included a bunch of 481X-powered machinery, he will have an even bigger challenge coming up. 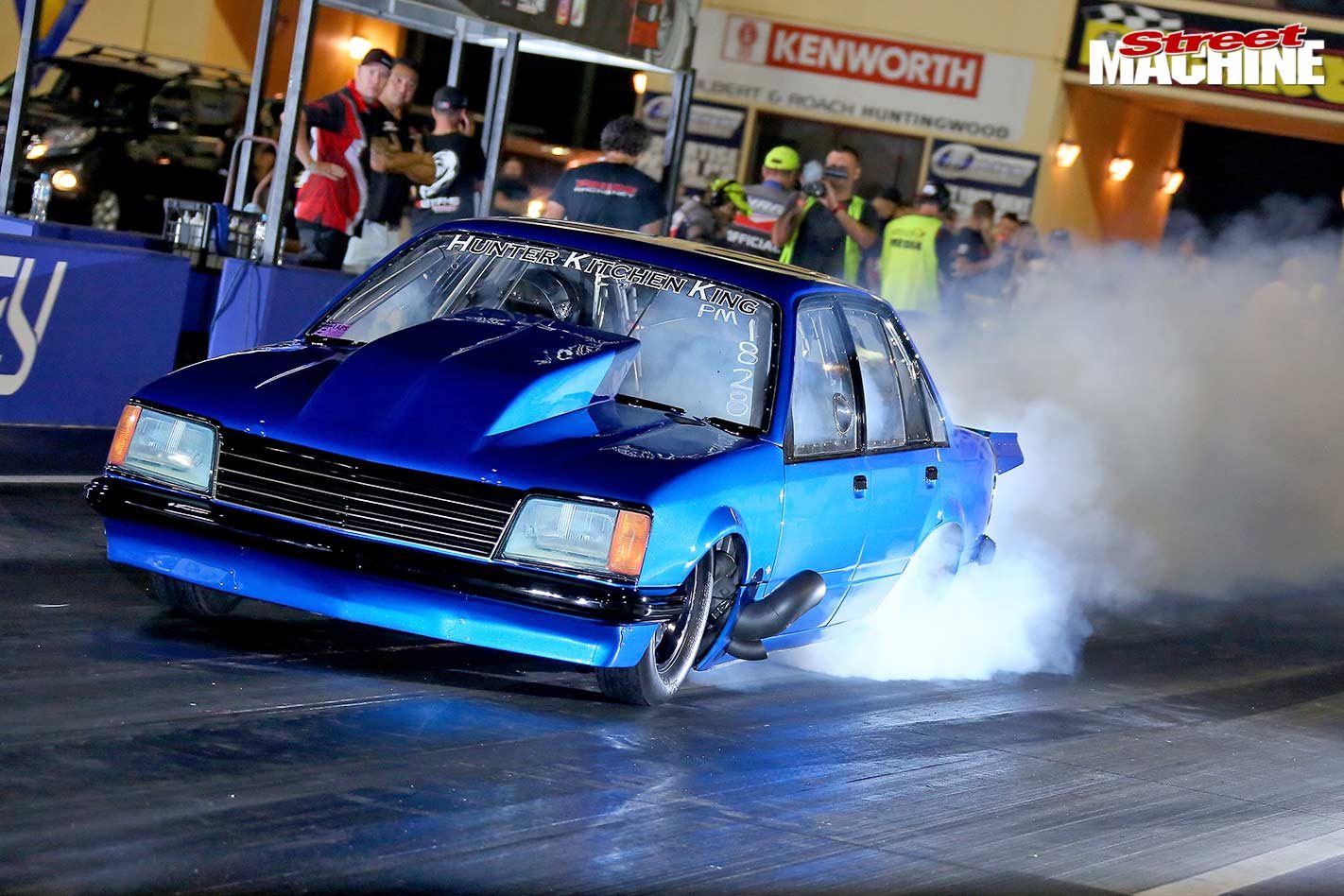 While plenty of other 10.5 cars skew and climb their way down the track, Jet’s VB runs arrowstraight, and he says that is in no small part due to Craig Burns and SCF Race Cars. “The car has been amazing,” he says. “It goes straight and smooth, and it’s been like that since day one, which is all down to Craig and the hard work he’s put in”

“The car is on the water at the moment as I have sent it to the USA for No Mercy,” says Jet. “I want to qualify in the 16-car field against 30-40 cars. If I can go a couple of rounds I’ll be stoked. And then I’m also going to do a PDRA race after No Mercy.”

We will be cheering him on the whole way, no doubt! 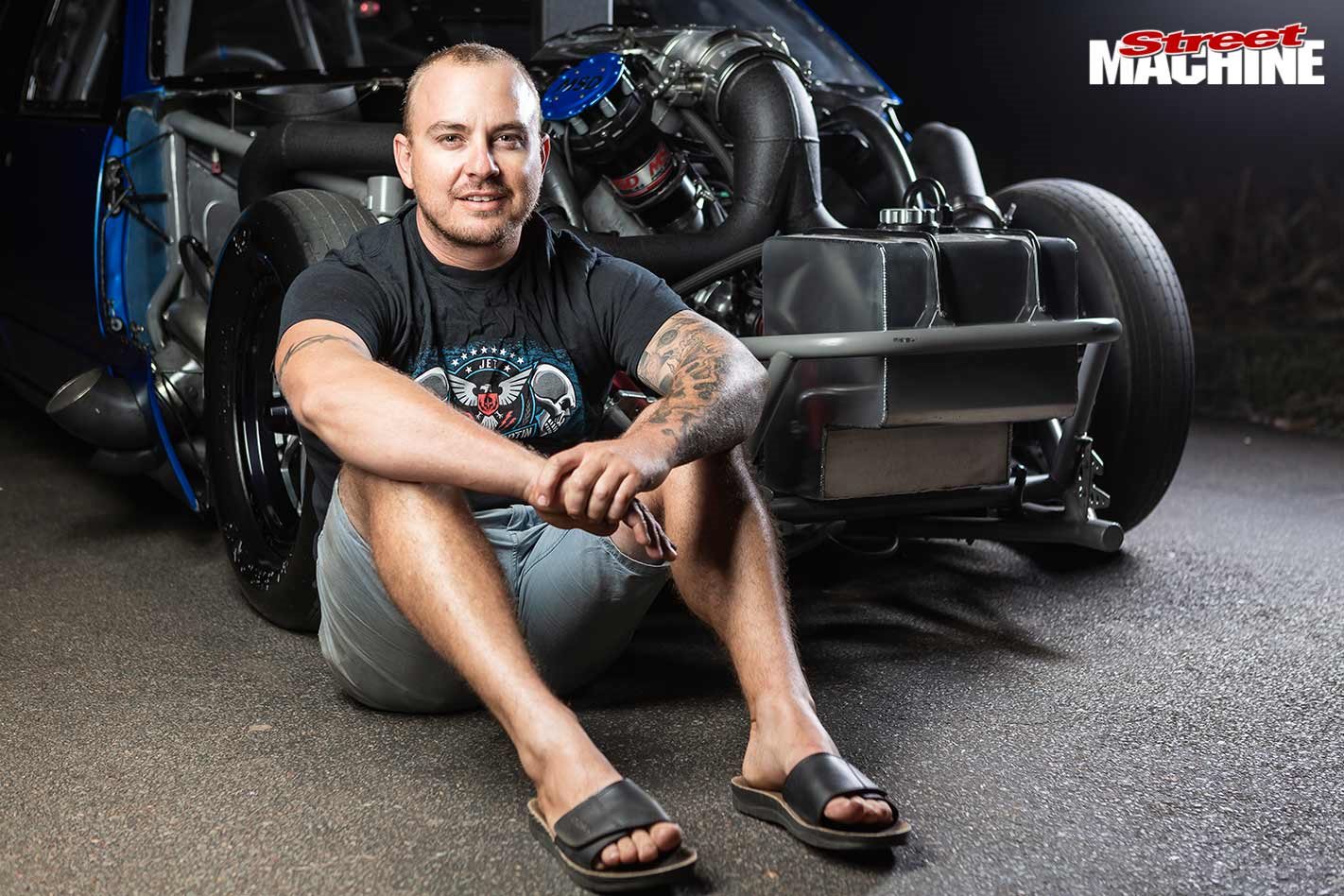