When it comes to track-spec Commodores, few things are more fun than a tidy VH packing a tweaked LS3

TELF tells me you got sick of falling off dirt bikes,” I venture by way of kicking off my chat with Glenn ‘Bear’ Bethune about his 6.2-litre VH Commodore, complete with stout rollcage for protection from falls. Glenn laughs out loud. “No, I still ride,” he says. “But I’ve also been interested in having a steer in a race car for a long time.

“It’s white,” Glenn says of his car’s simple paint. For now, the car wears VK-spec plastic bumpers, but there’s a plan to restore it to proper VH-spec steel bumpers

“I had a VK Brock Commodore years ago. That was in 1998 and I used to throw that around and have a bit of fun. It was a great car for places like the Great Ocean Road. But at the time, I never had the money to do anything more.”

But that was then and this is now, with Glenn having the time of his life chucking this glorious LS3-powered VH around tracks in the Victorian-based VicV8s race series.

As Glenn tells it, the VicV8s was established in 2012 when a bunch of mates wanted to go racing – rather than continue with circuit sprints – but for a variety of reasons didn’t want to join the ranks of Sports Sedans. So they used the template of the Queensland V8 race series to create their own fun class.

“I bought it ready to roll,” Glenn says of his track car. “It was built by a father-son team up around Albury-Wondonga as a Sunday fun car – it’s a ‘let’s go do some laps at Winton’ type of car. The previous owner [Jeff Breen] replaced it with a six-litre VE.”

That father and son is John and Leslie of McGaffin Engineering, who prepare and play with various speedway and circuit cars. “We started with a car from the wreckers up at Tumbalong,” Leslie explains. “It had minimal rust – only in the boot floor, and anyway, that was where the fuel cell was to go – so we stripped it and put it on the rotisserie.

“From there it was three months of almost full-time work.”

Looking at the Commodore’s safety cage, it’s easy to understand where a good chunk of that time went. It ties into the shell in eight places to provide body stiffness for sweet handling and, of course, impact and rollover protection far superior to a motocross bike.

The LS3 V8 was always part of the plan, and in telling how this one was built, Leslie summarises most of what’s required to install GM’s late, great all-alloy eight into the ex-Opel, toughened-by-Holden first-gen Commodore.

The all-alloy crate-delivered LS3 V8’s intake is a high-flowing over-radiator unit and it keeps cool using a PWR alloy radiator. Management is EMS 8860

“It’s a crate motor,” Leslie says of the 6.2. “The LS motors are good, strong and reliable, with plenty of power straight out of the box. We discussed the LS1 at first but went with the LS3.” No doubt, for a track car, the extra half-litre of capacity and grunt influenced the decision!

The McGaffins chose to leave the starter motor on the original Chev side of the engine – our driver’s side. Yes, with a starter motor, steering column and extractors fighting for space, it’s tight down there, but it all fits thanks to a VL-spec manual steering rack on the modified VH sub-frame, hand-crafted extractors and a VZ-spec sump. “Of course,” Leslie quips, “as soon as we’d finished making these extractors, you could buy everything off-the-shelf!”

Behind the LS3 is a heavy-duty Tremec TKO five-speed supplied by well-respected conversion specialist Mal Wood. “We explained what we were doing and it arrived with everything to bolt in,” Leslie says. “But the tailshaft came from Melbourne to suit the nine-inch diff.” Full-floater hubs are included so the wheels stay on their bearings even if an axle breaks, and the diff is located by a V8 Supercars-style Watts link with the body-mounted bell-crank accessible for adjustment in the boot.

The suspension is specified the same as the old Commodore Cup track cars, using Bilstein dampers. “We decided that was a good start,” Leslie says. “It was a well-developed package.” Surprisingly, the McGaffins installed the hardware using rubber, rather than poly, bushes in the boxed suspension control arms. “We reckon it provides a better feel for cornering and braking, and in our experience the rubber lasts longer as it is more compliant and less likely to chop out.” Whiteline adjustable sway-bars allow the car’s handling and traction to be tweaked to suit individual tracks.

Buying the car complete saved Glenn the heartache of building it. “It was good to go,” Glenn says of his turn-key track-day weapon. “All I did was install a fat seat – I’m a bit bigger than the previous owner – and took off!

“To be honest I did look at building my own car. I’m not a car builder by any means, so it would have been a task for someone else to do for me, to spend the time on it. But as soon as the expected costs got over 60 grand I thought: ‘Oh!’”

Being new to track driving, Glenn spent plenty of time settling in to the car. “On Fridays you can do test-and-tune days at Winton,” he says. “So I did a lot of those. I shredded a few sets of tyres and learned heaps. I’d like to do more training actually.”

Glenn has made a few mechanical changes to his car. “I had a cam put in it,” he says of the now-350rwkW driveline. “It added 50kW, and that’s when I started breaking gearboxes.” Known for their strength, the broken gearboxes – yes, more than one – may come as a surprise to many street machiners. As Glenn explains it, the problem runs deeper than stripped teeth. “They try to spread themselves open,” he says, before admitting there are some outside influences. “I’m, ah, known to be pretty hard on my gear, but that’s the way it is!”

Another small frustration has been the car’s AP-calipered four-wheel disc brakes. “The rotors that were specified for the car require machining three ways to get on,” Glenn says. “Unfortunately, they’re not off-the-shelf components, like an HSV part. And due to the machining involved, the rotor becomes a one-use component. But the upgrade is five grand – and that’s money I don’t have at the moment!”

As most who are involved in track days know, on-going dollars and development is all part of the fun. And fun is what Glenn is having – he’s up at the pointy end of the VicV8s series, and loving every minute of it. Racing at Bathurst has been a highlight. “There were quite a few of us who did the extra round at Bathurst at Easter,” he says. “Racing there is amazing. Absolutely amazing. Incredible."

The rich burgundy door trims are from an earlier VB/VC, but give the well-caged interior an air of comfort. The ’cage is technically an eight-point but has several extra stays and tags to the shell

Being a track car, I ask Glenn how kind it is to its tyres. He responds with a backpacker-murderer laugh. “The worst I’ve done is two sets in one weekend. That’s four grand,” he admits. “It was hot: 38 degrees. The tyres just about melted; they were obliterated. But you can make them last too. It depends on lots of things, such as the angle of the driver’s right foot!” 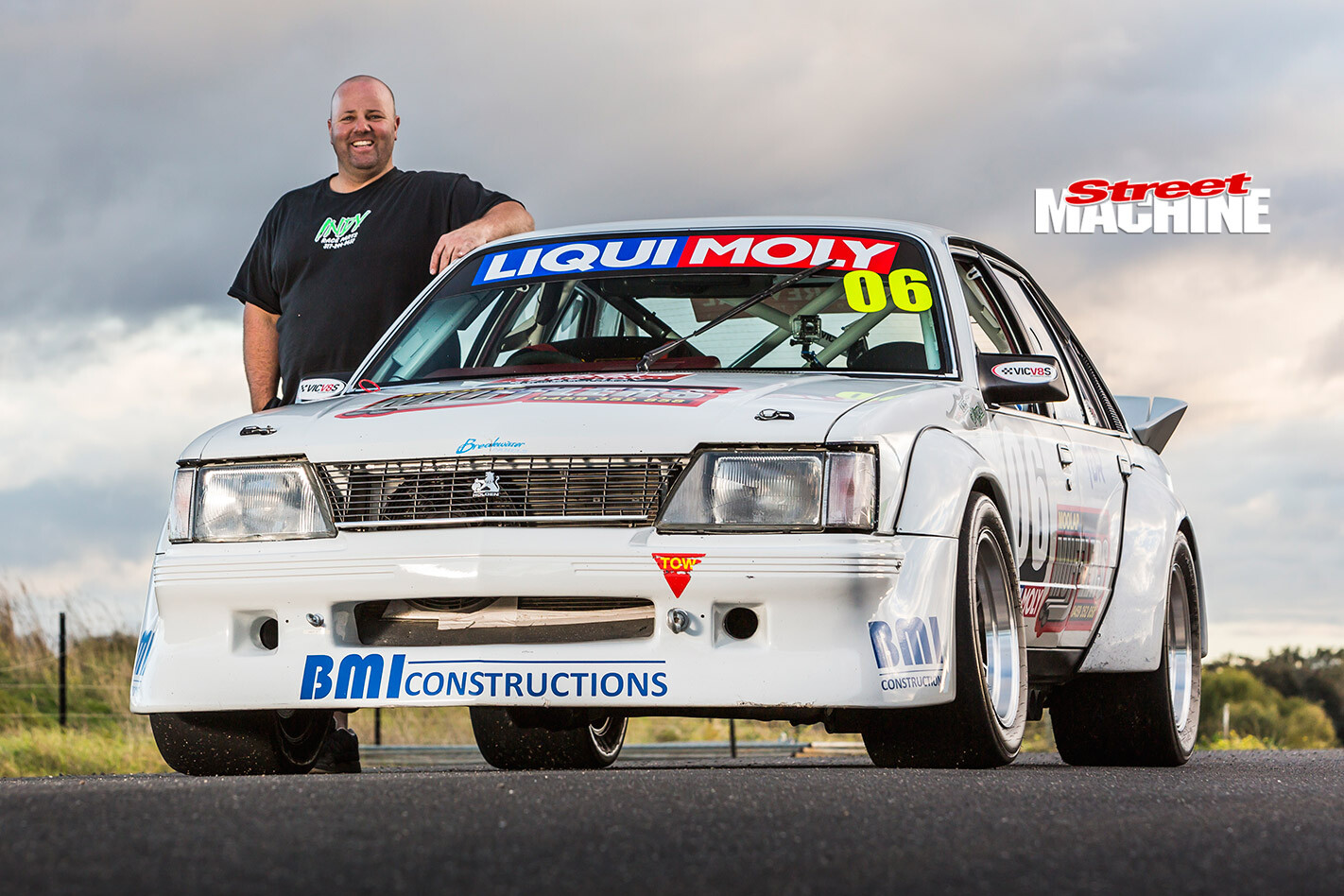