The Fox1 Challenger earned legendary status in the now-classic Hoonhead flick Running On Empty. Thirty-seven years later, the Fox is still on the run

WHEN it comes to Australian star cars, there’s only a handful that made the same impact as Fox’s 1970 Dodge Challenger from 1982’s iconic flick Running On Empty.

The majority of movie cars are destroyed in the process of becoming legends, or else parted out and scrapped after filming, or, dare we suggest it, restored to purist spec. It’s lucky – actually, it’s a friggin’ miracle – that the FOX1 Challenger has survived 37 years unscathed. No need to scream spoiler alert; you should all know it was actually a black VH Valiant sporting silver frost wheels and cutaway B-pillars that blew up when Fox committed harakiri after losing to Mike at Kemps Creek in the movie – not the real FOX1. 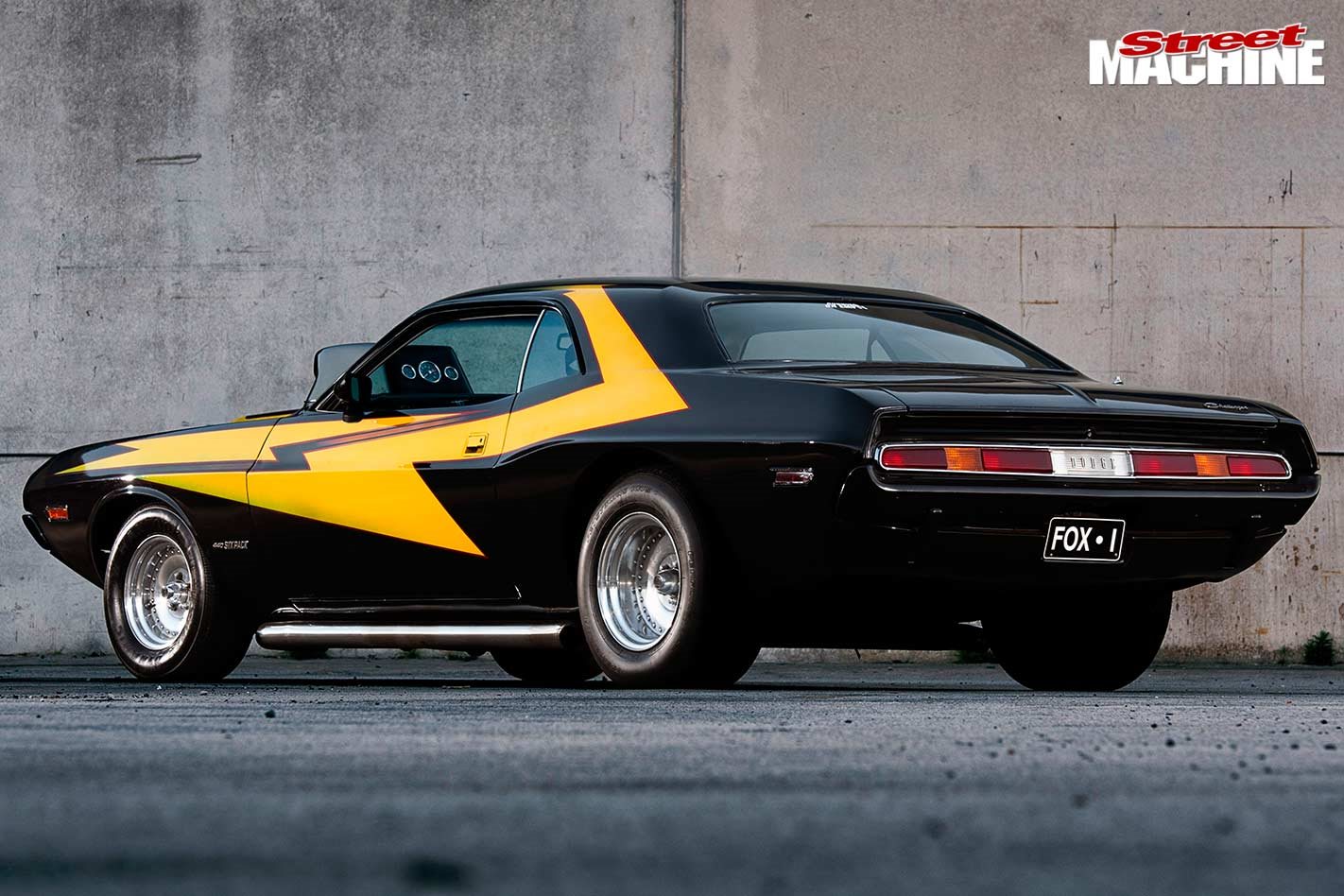 The gauges housed in the back of that wild bonnet scoop were always a cool touch, and the radiused rear guards (cut using purists’ tears) were necessary to house the 15x10 Center Lines shod with big meats. The amber lights spliced into the rear lenses were for Australian compliance, back when the Dodge was less than a decade old

As one-of-one builds for the movie, both the FOX1 Dodge and Rebel’s ’57 Chev were caned but still treated relatively kindly. After all, substituting these two cars wasn’t as simple as blowing some red paint over a donor to recreate Mike’s XY Falcon or the Gazzards’ EK, replacements of which could be easily sought in 1982 from the local car yard or newspaper classifieds. Once the final scenes were shot, the Challenger and ’57 were in good nick and sold off, which improved their chances of survival. 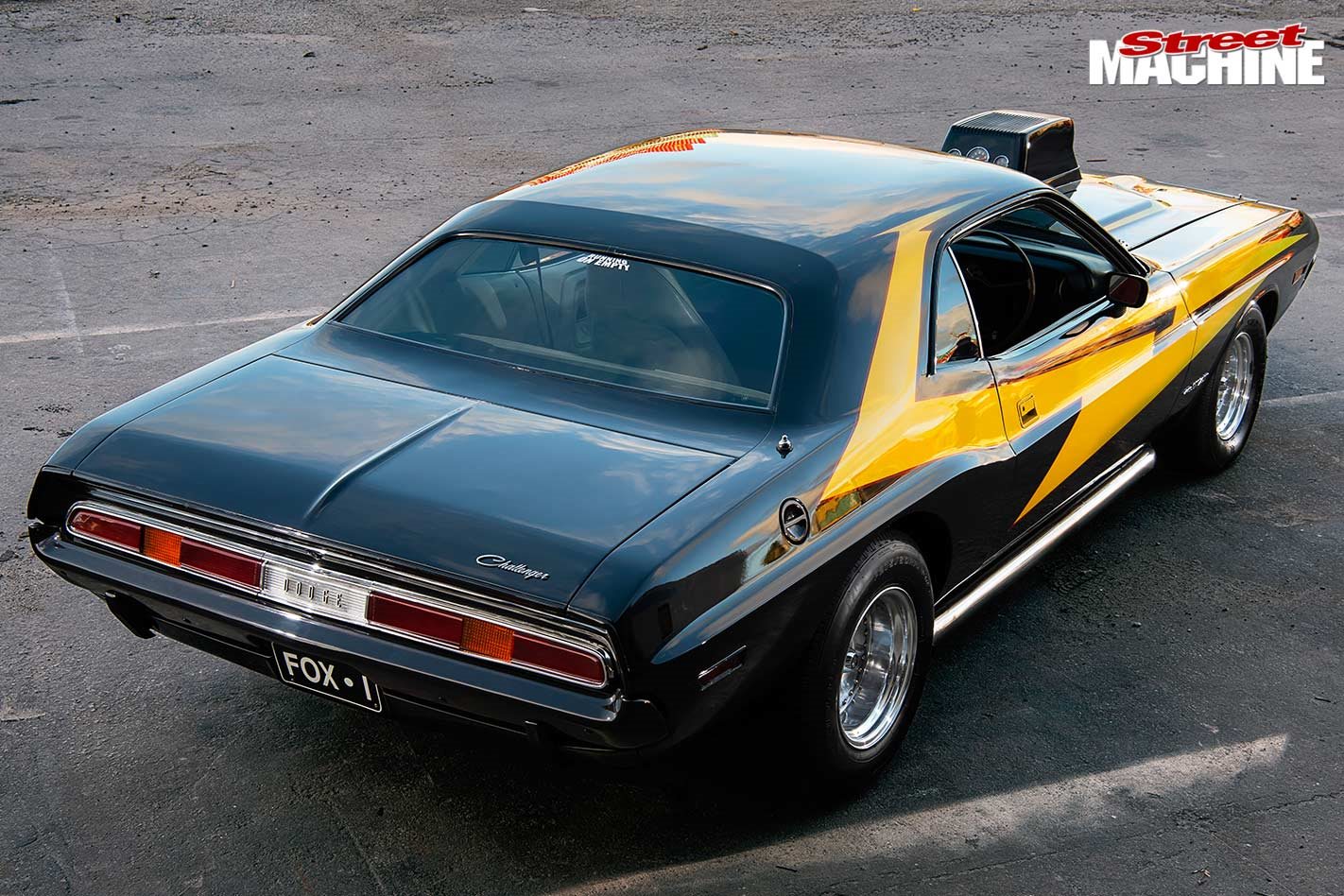 The Challenger has been treated with kid gloves from the moment it entered the public arena. Careful long-term owners have seen this icon living all around our great country but preserved in its movie guise.

Its instant legend status with local fans drew heavily on its mystique as a US muscle car; Challengers are still relatively thin on the ground Down Under, but its selection for the movie was more due to availability than any burning desire for a specific model. 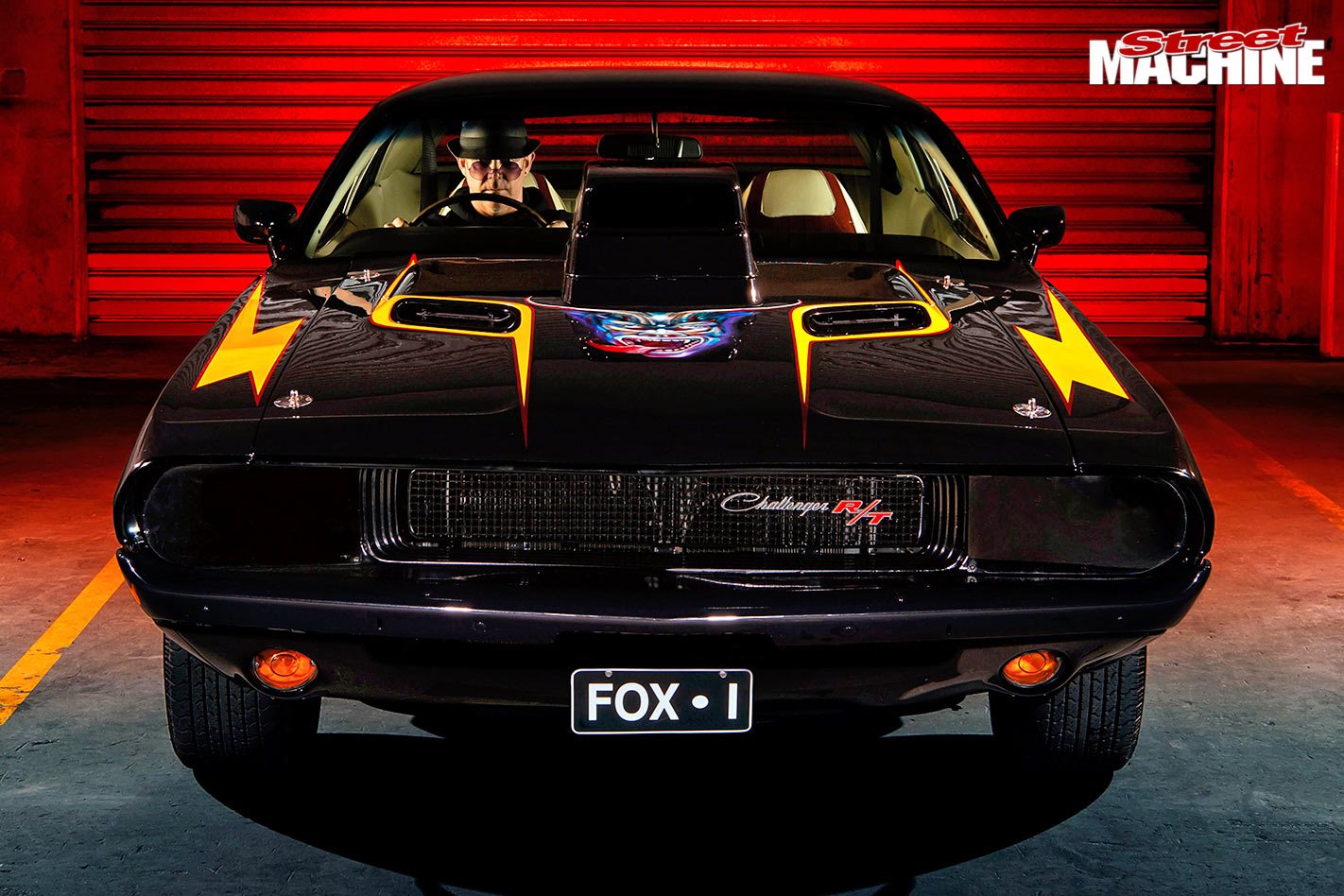 “When I joined the production crew as a young mechanic, the Dodge was already part of the fleet,” explains special effects man and Running On Empty guru Steve Courtney of FX Illusions, who got his break into the film industry after brokering a deal to supply his mate’s chopped ’53 Chev for the flick; yep, Rammer’s Chev. “The brief was to build a number of hero cars mixing models of Australian and US origin. The Aussie stuff was easily sourced, but the American stuff was limited – this Challenger just happened to be a Yankee car being advertised at the time, so was snapped up and the rest is history. It is actually a genuine Burnt Orange Metallic R/T 440 six-pack car, matching numbers and all!” 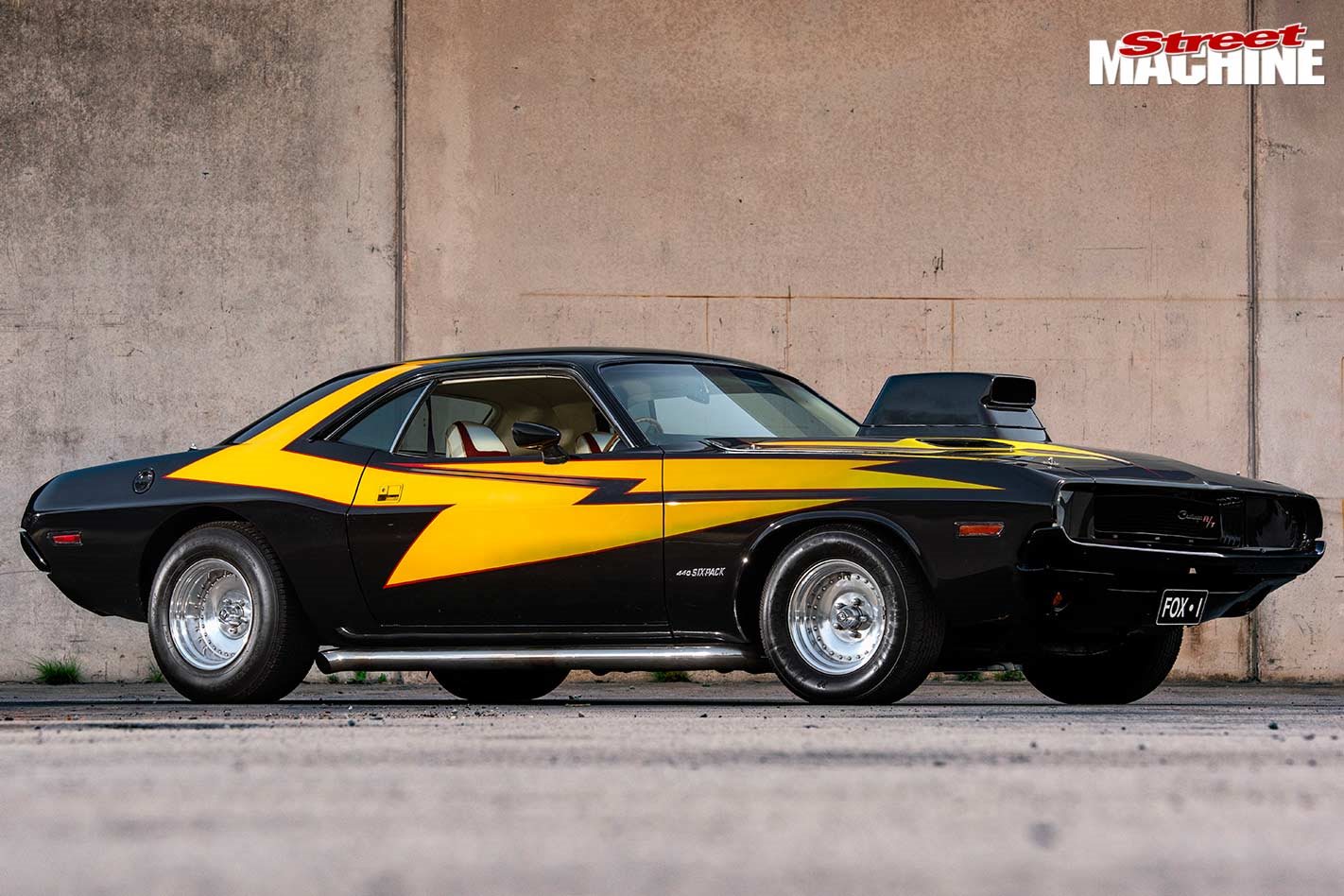 “Clear to go, Foxy.” The Challenger cuts a wicked profile. Movie legend aside, it’s a quintessential old-school street machine; the black paint and lightning-bolt graphics give the Dodge the presence and attitude sought by the film producers to nail its starring role

The right-hook conversion had been completed prior to purchase and it wasn’t long before the transformation to wild street racer began. The movie’s art director, Greg Brown, specified the evil gloss-black paint and graphics, accentuated by radiused rear guards, and clad with Center Line Auto Drags, the mega bonnet scoop and devil’s head mural.

Steve got busy sorting any mechanical issues with the suspension and brakes before tuning the factory six-pack induction – named for its use of three two-barrel Holley carbs.

Read next: The real story of the Mad Max XB GT Falcon 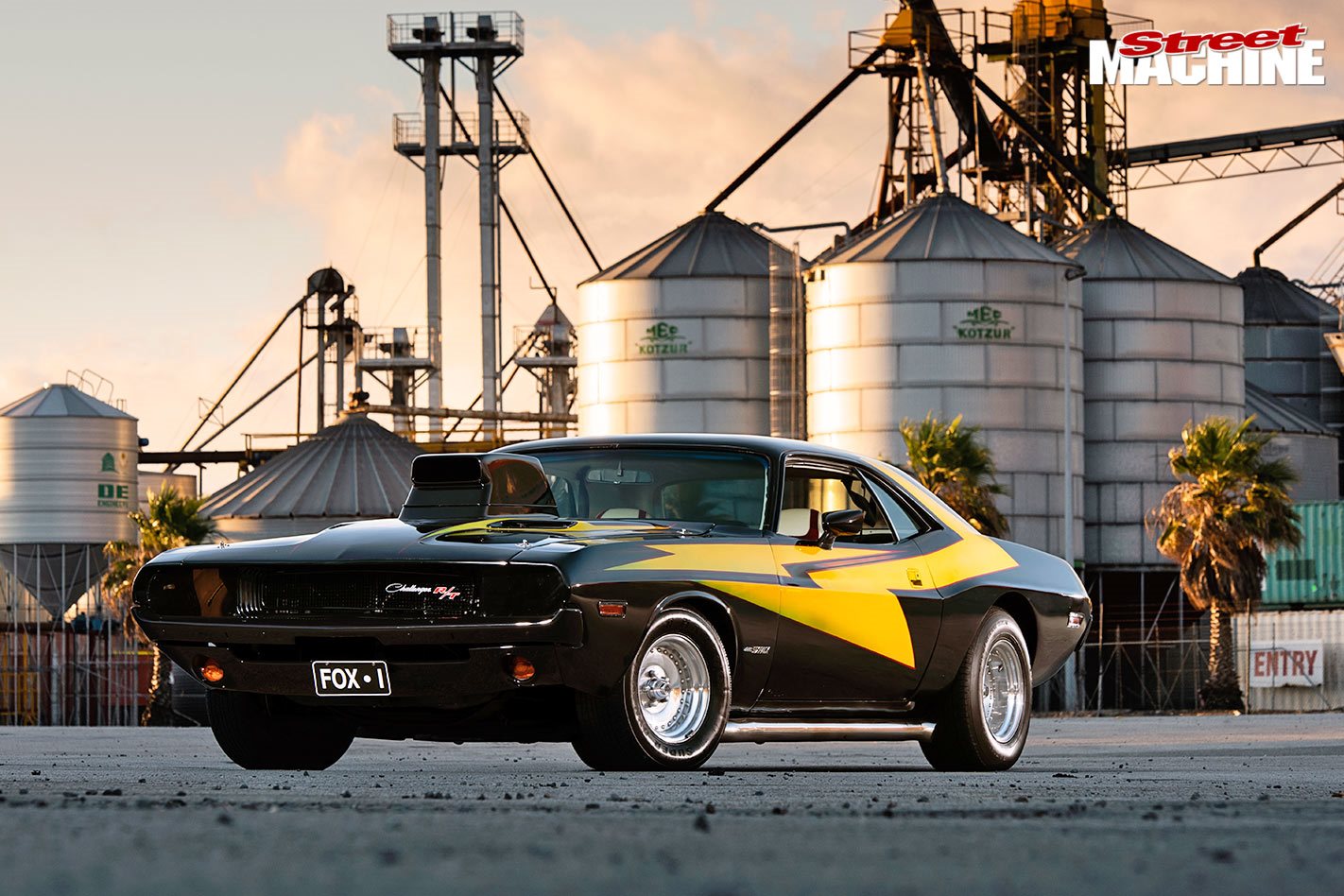 “The mechanical work on all the cars kept myself and mate Mal Ward very busy, but if that wasn’t hectic enough, the producers asked me to cut my long hair and shave off my beard to double for actor Terry Serio in Mike’s driving scenes. Terry wasn’t a confident driver, but I’d been a hoon for many years,” Steve says with a laugh. It’s about now that I wish I had ‘throwing hoops in Rebel’s ’57’ on my resume.

When the movie production was run and done, the surviving cars were sold and went their separate ways. The Challenger was Sydney-based for a while before being relocated to Queensland for a stint. 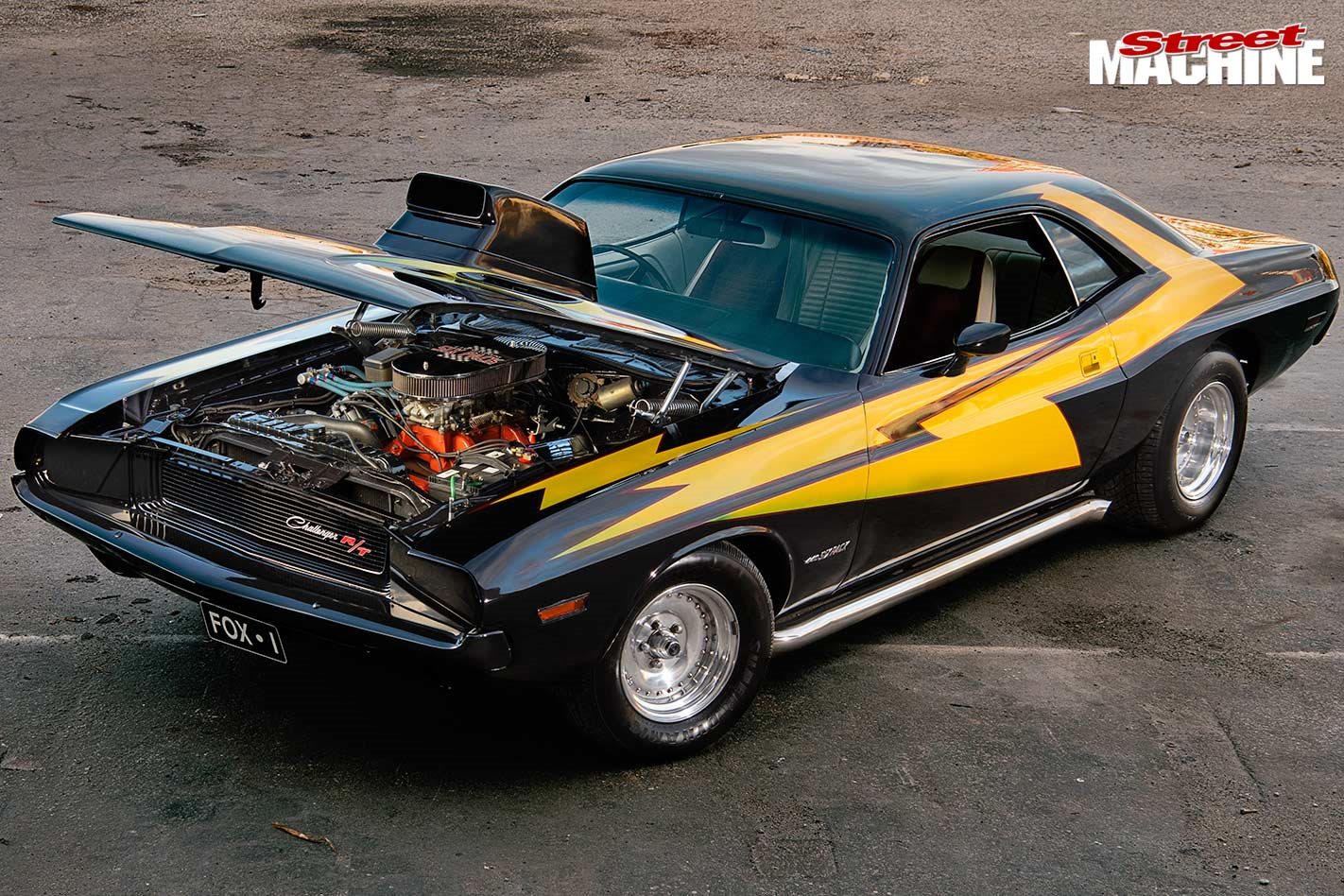 Fast-forward to 2015, and its West Australian then-owner, Pep, advertised FOX1 for a short time before withdrawing it from sale. Thankfully it was just long enough to catch the eye of long-time Mopar fan and Running On Empty tragic Jason Turner.

“I first saw the movie when I was 13 years old and loved all of the cars, but it was FOX1 that really caught my attention,” says Jason, who owns World Custom Trimming in Perth. “I always dreamed of owning it and am still pinching myself that the 30-year dream has come true.” 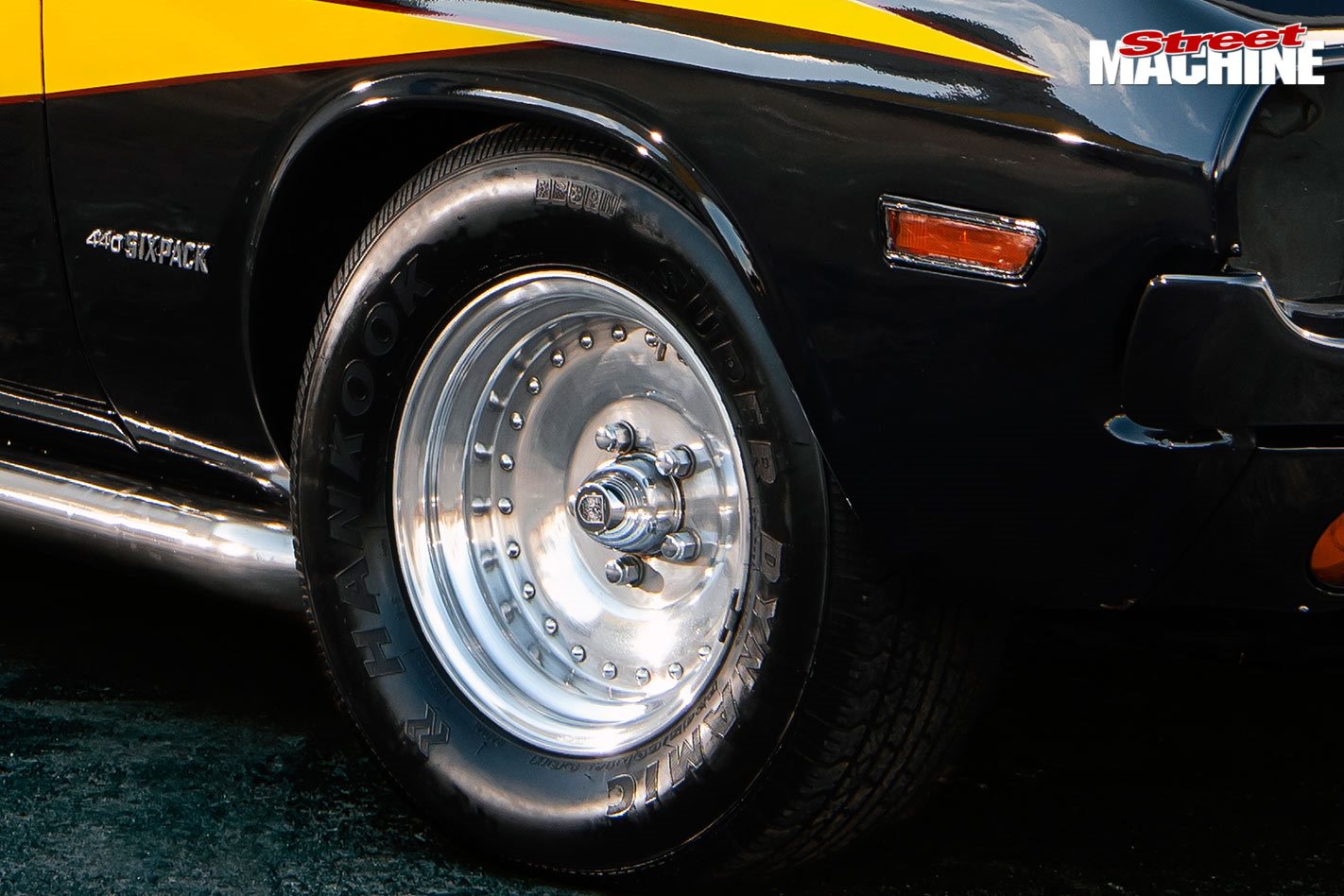 Jason tracked Pep down through the local Mopar circles and asked for first dibs should the Challenger be again offered for sale. That fateful day came in July 2017 when Pep contacted Jason to see if he was still interested. The seller was impressed with the quality of Jason’s own Chryslers, so he knew the car would be going to a great home, and one that would respect its legacy.

Jason’s dream was on the brink of materialising, so he asked his best mate Dominic D’Agostino if he was interested in sharing ownership of the Dodge. The pair had been partners in several cars, namely a 1968 HK Monaro GTS 186S, VN Group A Commodore and VH R/T Charger, so they knew it was an arrangement that worked. 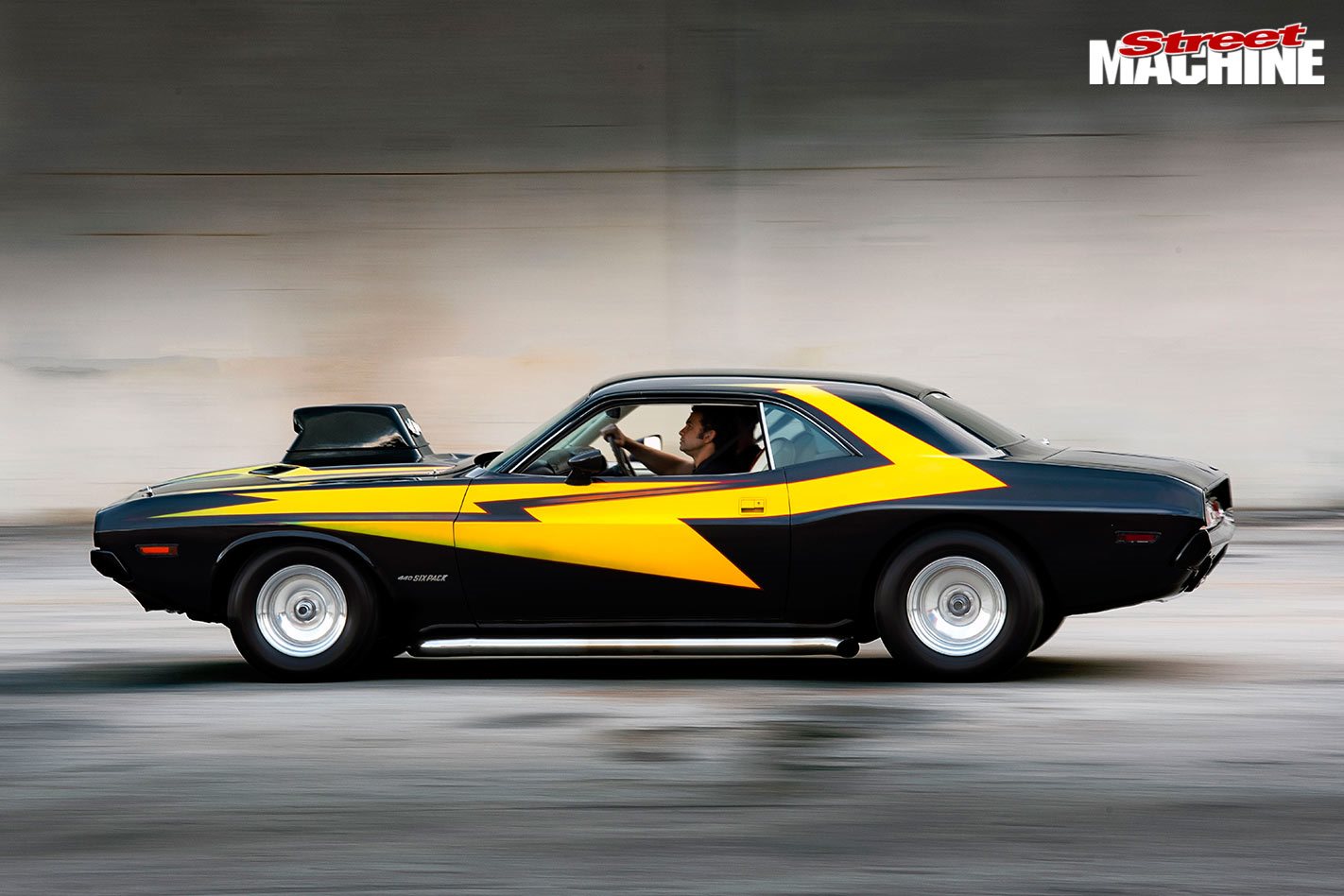 Jason and Dominic also share more than ownership of the Challenger; they are both hearing-impaired, so the closed-caption option on the DVD version of the film had long made it a firm favourite.

The car was still visually in very good condition when it came into Jason and Dominic’s hands, and the pair enjoyed the Challenger for the next six months. However, age and a lack of prior use had taken its toll on the original 440 donk, so the boys pulled the motor for a freshen-up. 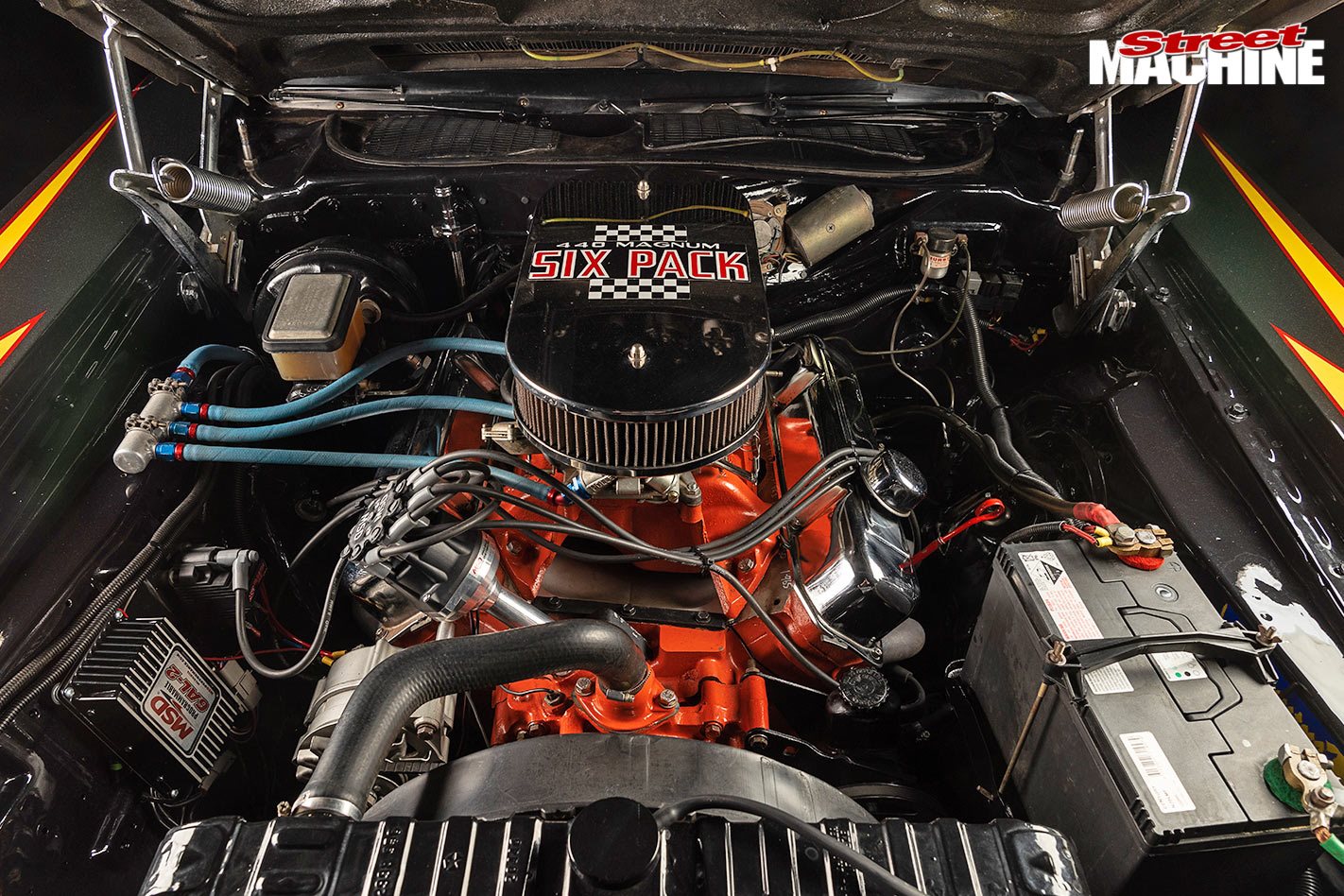 The original 440 R/T six-pack engine has been internally tweaked with a 494ci stroker assembly and porting of the 906-casting heads. The glorious, progressive triple 2bbl Holley carbs remain front and centre; however, checking the jets with this set-up isn’t as easy as Fox would expect!

Local Perth engine guru and Hot Rod Drag Week stalwart John Faraone was tasked with the big-block’s rebuild, and it was decided to tweak the factory six-pack combo to help FOX1 regain its number one title – well, against the other movie cars, anyway!

The factory cast block was stretched to 494 cubes by way of a Scat stroker crank and rods assembly. These spin in conjunction with JE flat-top pistons and a Comp solid-roller 280-duration camshaft to button up the short assembly, while a Melling oil pump and swingin’ Milodon pan keep the good oil flowing. Heads are 906 factory castings that have been ported by Faraone Engines and equipped with Ferrea valves. 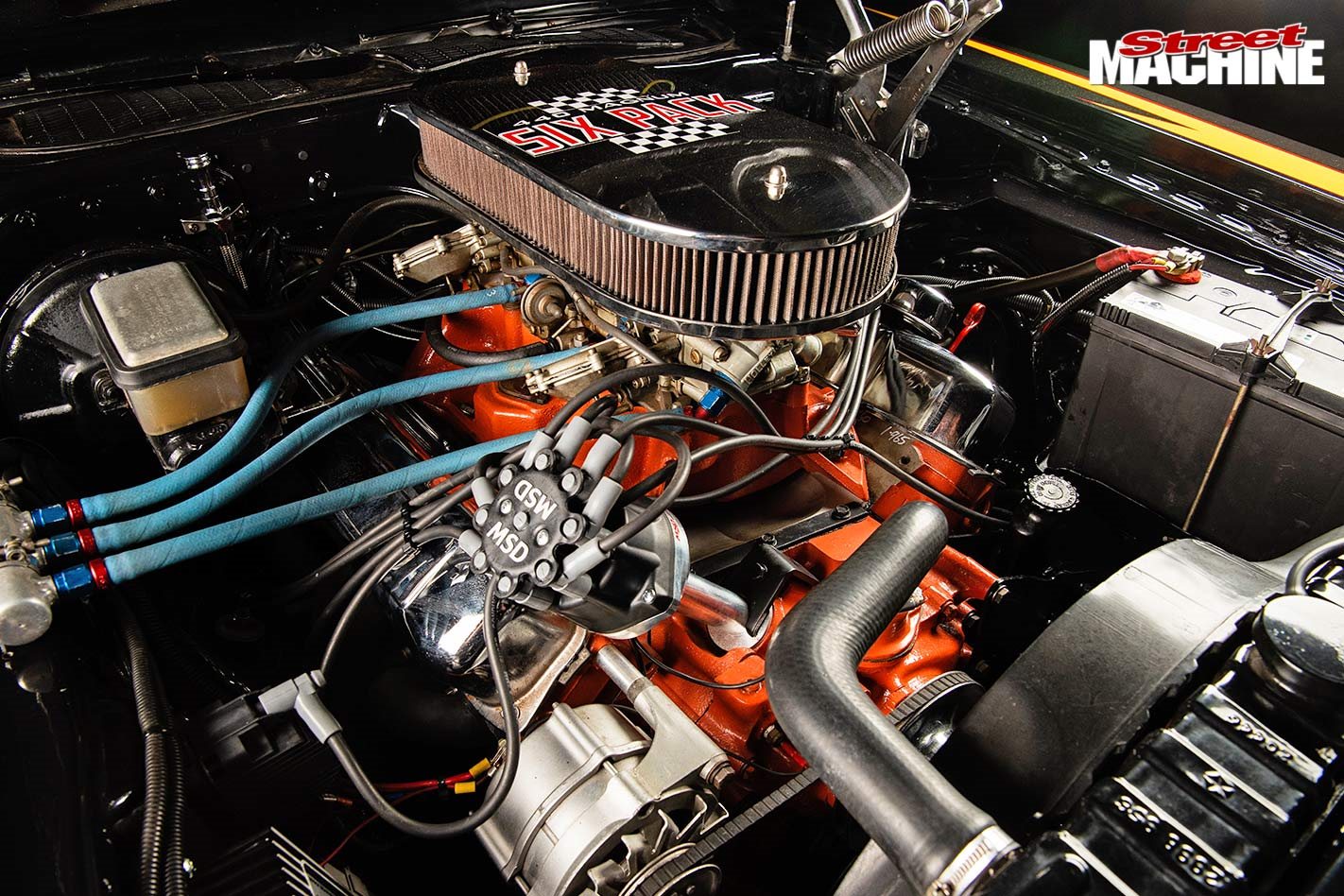 Timing was another bee in Fox’s bonnet, but this has been upgraded with a 6AL-2 ignition module, billet distributor and leads from the MSD catalogue; ample enough to light a decent fire without burning the snatch. 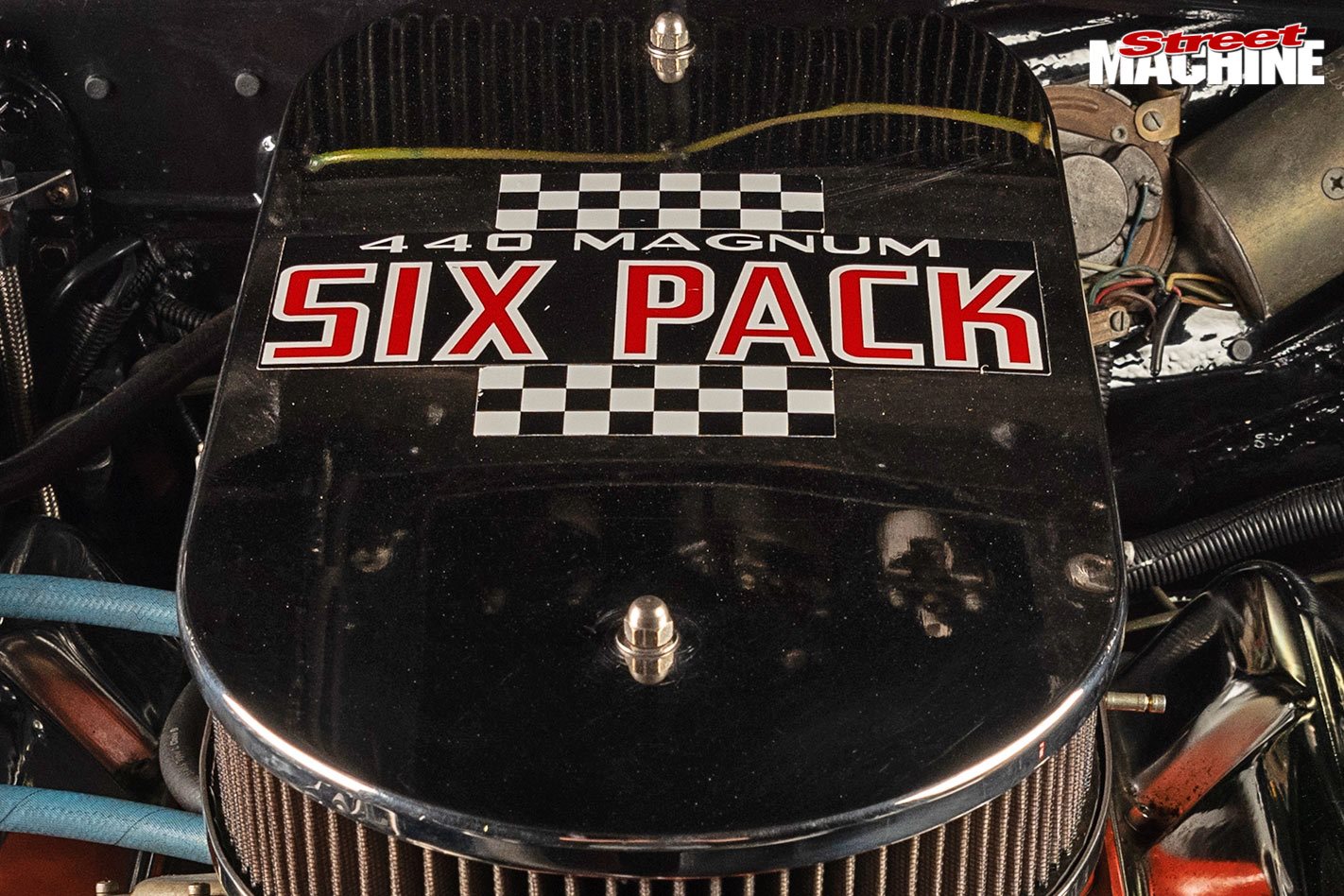 The 727 Torqueflite transmission is fronted by a Dominator 3800 stall and been treated to a shift kit and full manual valvebody, while the Final Drive Engineering-supplied tailshaft spins back to the movie-spec nine-inch running 3.7 gears.

The factory torsion bar and leaf-spring suspension remain intact, and the Chrysler front disc brake assemblies work in conjunction with Ford rear discs that came as a happy by-product of the nine-inch conversion. The polished Center Line Auto Drag rims measuring 14x8 and 15x10 inches are as much a part of FOX1’s identity as the black paint, lightning bolt graphics and bonnet scoop, and are clad in 245 and 275-width tyres, respectively. 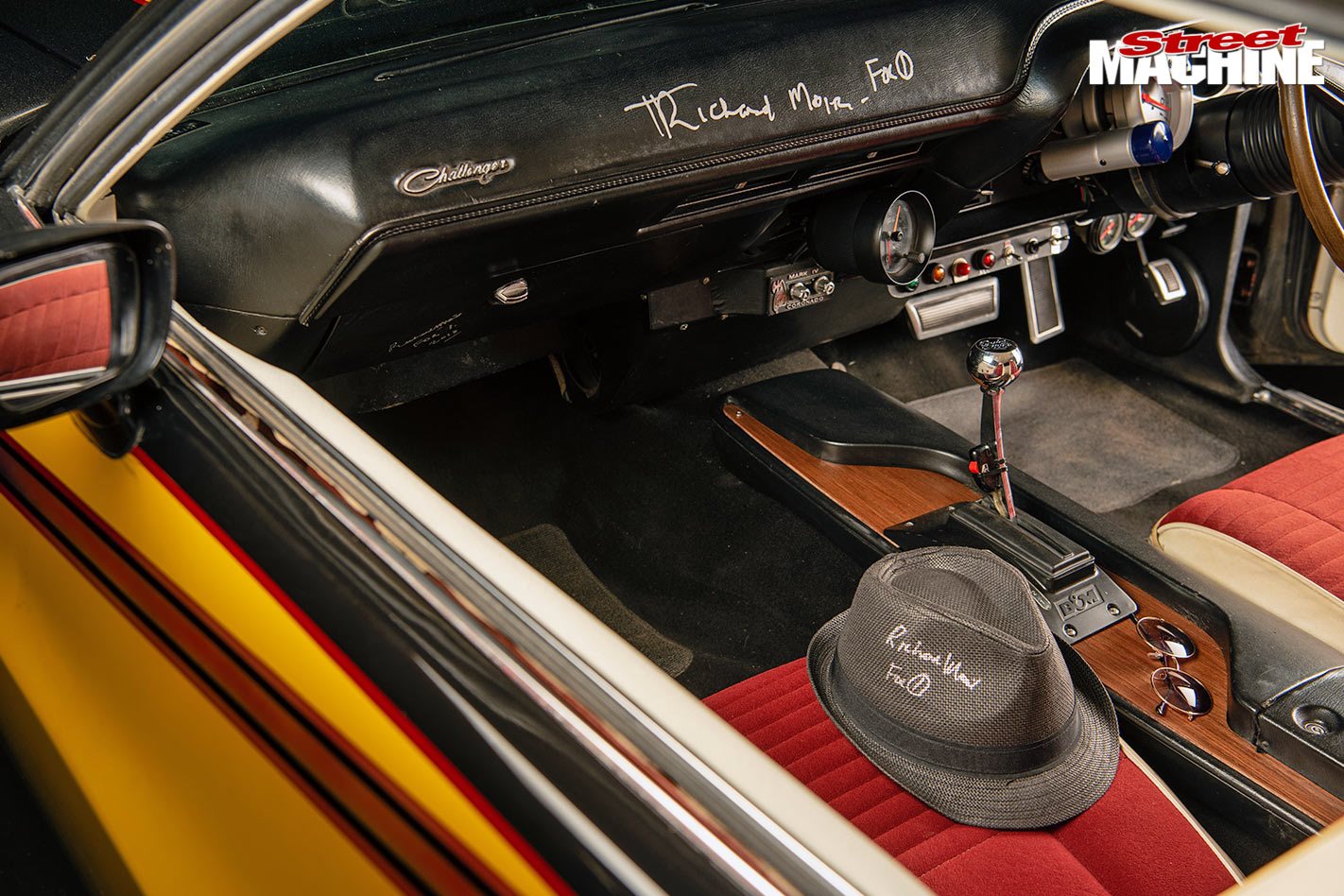 When actor Richard Moir, aka Fox, donned his pork-pie hat and Lennon glasses, you knew the action was hotting up! The interior remains movie-spec, factory-stock R/T bar the B&M shifter and a smattering of accessory gauges and switches, and Richard Moir’s signature is the perfect finishing touch

Freshening the Challenger’s running gear was completed just in time for the haul across the Nullabor to guest star at the 2018 Running On Empty Festival in Cobar, but the trip wasn’t without a few hiccups.

“We split the base of the low-slung Milodon sump on the drive out to Rebel’s Garage at Canbelego,” Jason says. “Thankfully we had the help of Steve Courtney and Mark Riddell, who managed to fix the sump and get us back on the road quickly to enjoy the rest of the festival; 35 years later and Steve is still working on the car.” 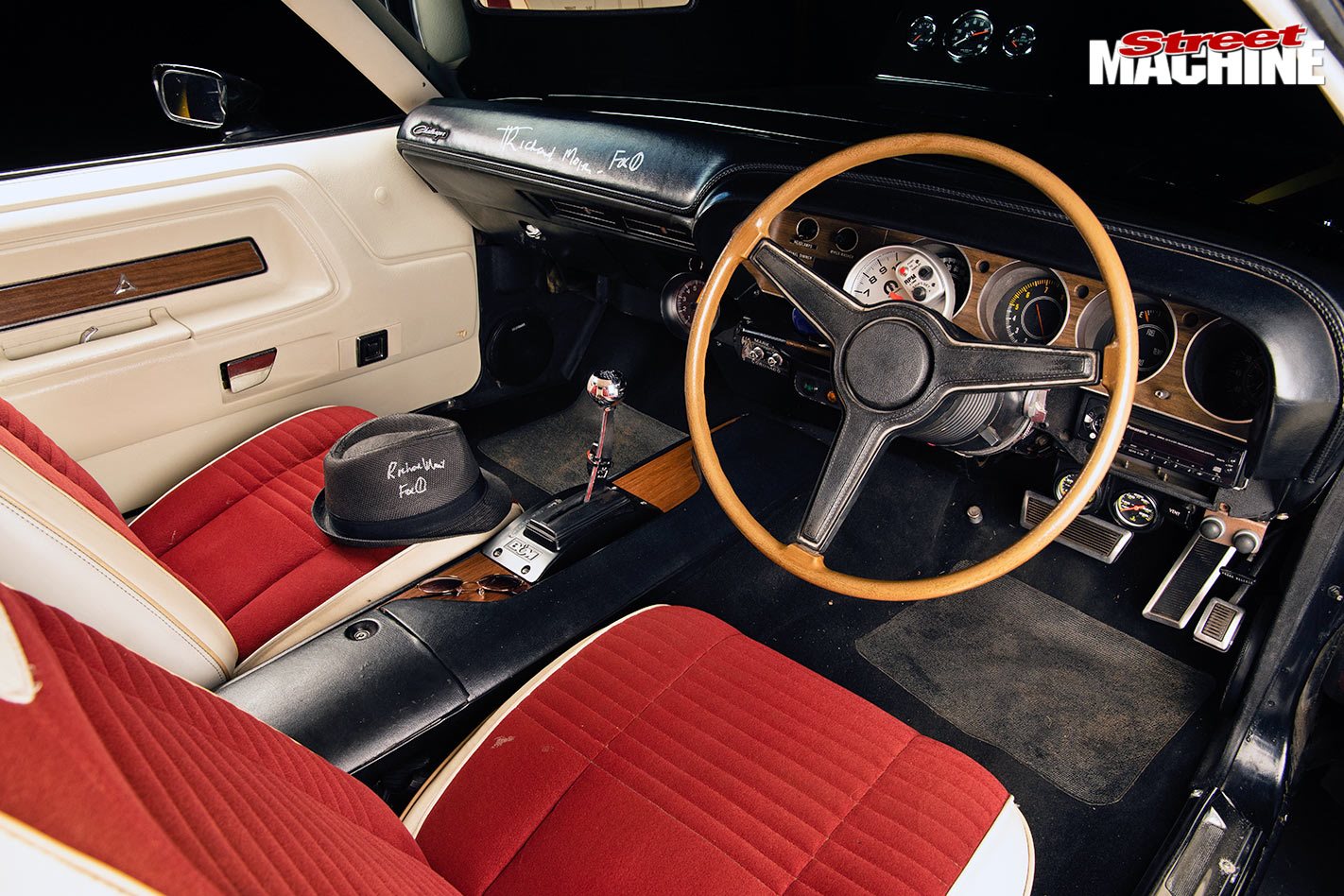 Future plans include a suspension and brake upgrade. Registration requirements meant the boys had to fit rear tyres that fitted within the guards and exhaust mods that bypassed the sidepipes, but it will definitely clock up road miles for special events or theme shows, and will keep Jason and Dominic rolling along while they finish their current projects – Jason has a custom 1970 ’Cuda in the build with a 588-cube Hemi, while Dominic has a VG Valiant ‘Super’ Pacer project on the go. 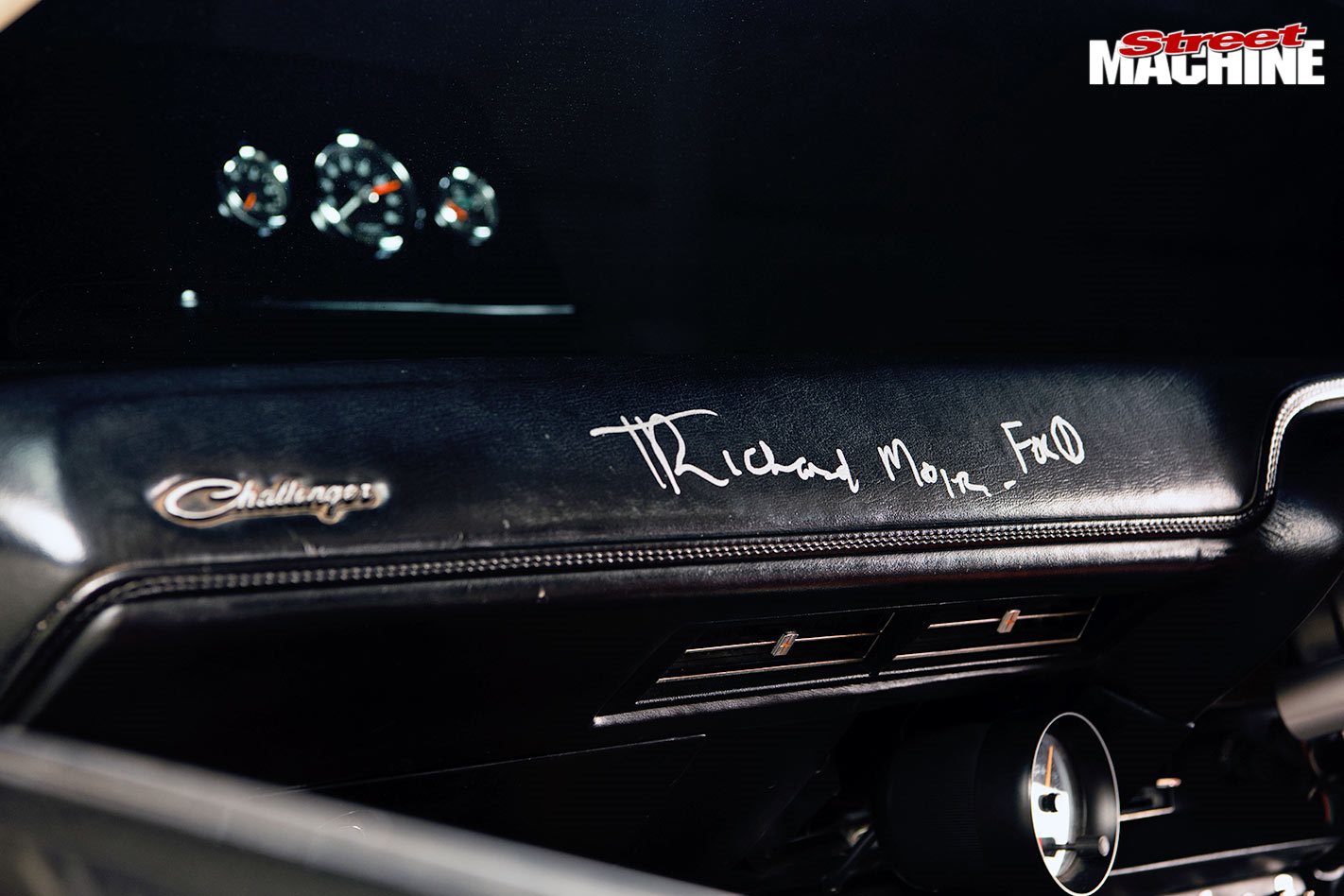 “We run a website (fox1.com.au) and a Facebook page for the car and have received messages from all over the world about FOX1 and the movie. People love that the car still lives on and that we’re out there sharing it with both old and new fans alike.” 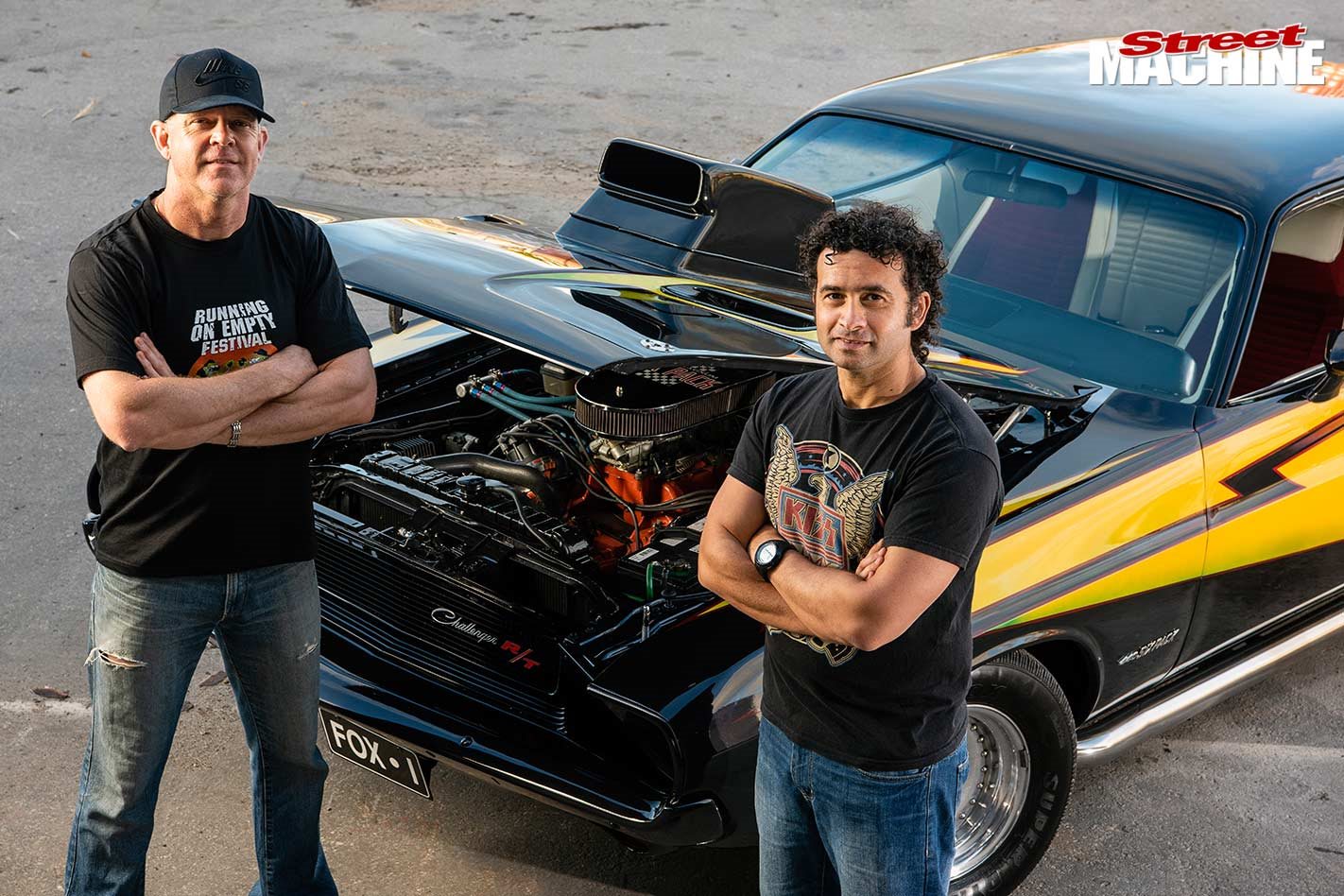 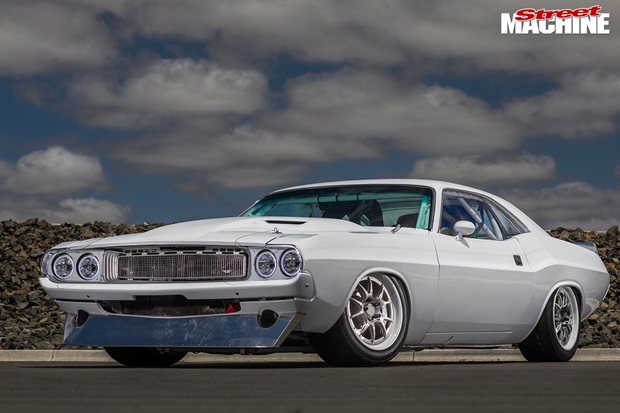