Do the Southern accents, CB talk and wanton destruction of 70s Pontiacs make up for the lack of car chases?

THE original Smokey and the Bandit from 1977 struck a real chord with the public, popularising CB radios, Pontiac Firebirds and Burt Reynolds’s luxurious moustache in one fell swoop. Surely a second instalment could only be a winner? Well, er, yeah; you’d think. The winning ingredients are all there – the car, the girl, the trucker friend, the antagonist – but the spark just isn’t. 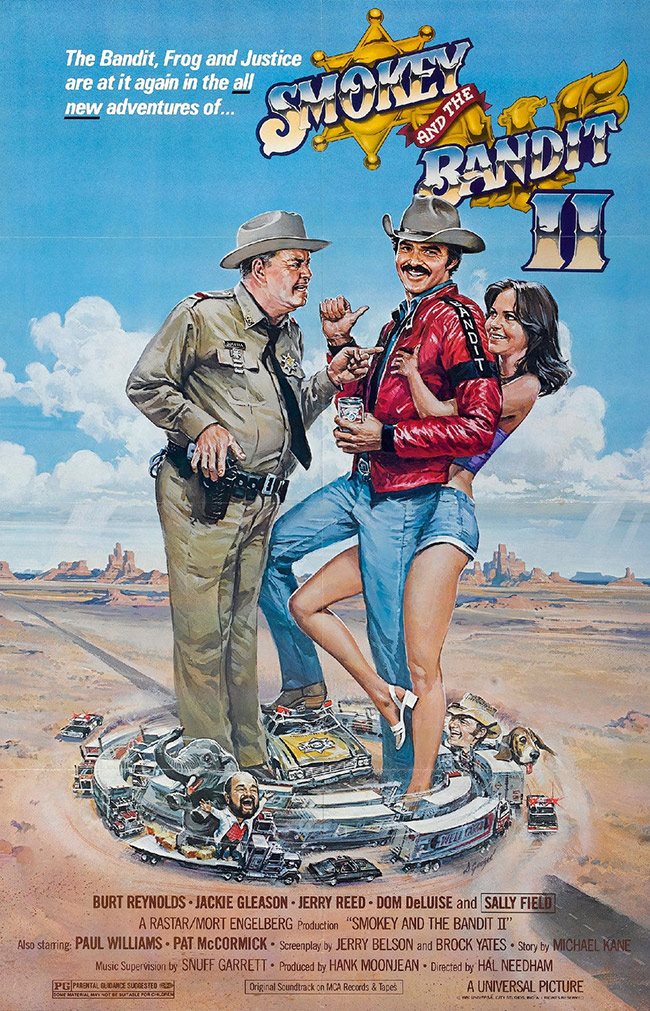 The Burdettes, those shonky boys from the first flick, are now campaigning to install Big Enos as governor of Texas. After a literal mud-slinging match with their competitor, both candidates are given a drubbing by the current office-holder: shape up or neither will be endorsed.

Discovering the outgoing governor is having troubles getting a ‘present’ to the Republican National Convention, the Burdettes conspire to employ Bandit and team to shift the crate of unknown contents. Trucker Cledus ‘Snowman’ Snow (Reed) is all for the 1300-mile run from Miami to Dallas (a cut of the Burdettes’ $400,000 offer certainly helps), but there’s one big issue: Bo ‘Bandit’ Darville is now out-of-shape and soaked in booze. 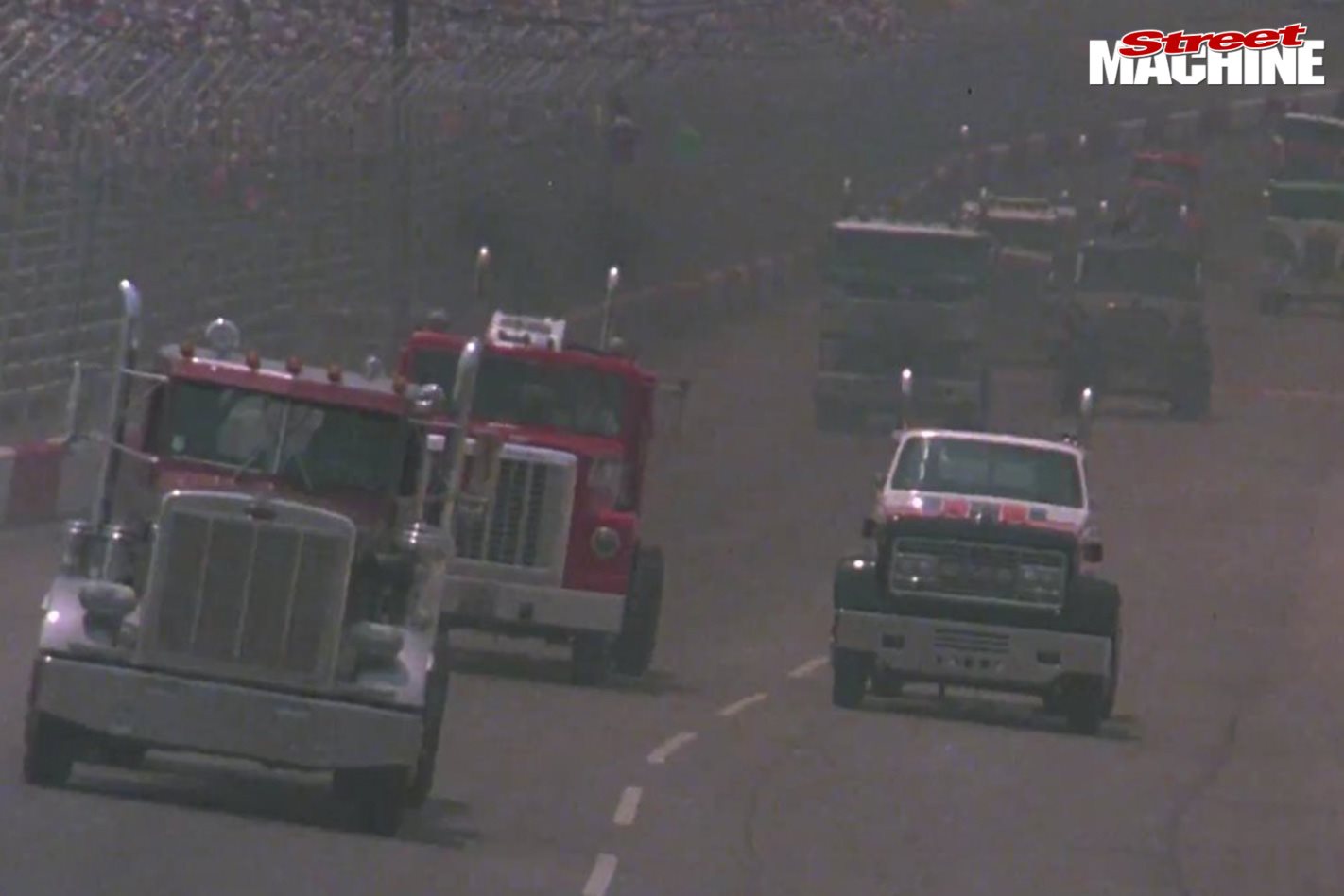 Snowman finds Bandit wallowing in his own filth in the skanky Gator Motel, smarting from the loss of his girlfriend Carrie, aka Frog (Field). A miraculously timed phone call sees Frog bounce out of her second attempt to wed the dim Junior (Henry), raising the ire of his father, Sheriff Buford T Justice (Gleason). Although there are only a few days to get the package to Dallas, we get a training montage where Bandit hits the weights, does some jogging and brushes up on his driving skills at the local go-kart track. Frog trades Junior’s 1977 Pontiac LeMans in on a brand-spankers 1980 Pontiac Firebird Trans Am Turbo, and the band is back together. 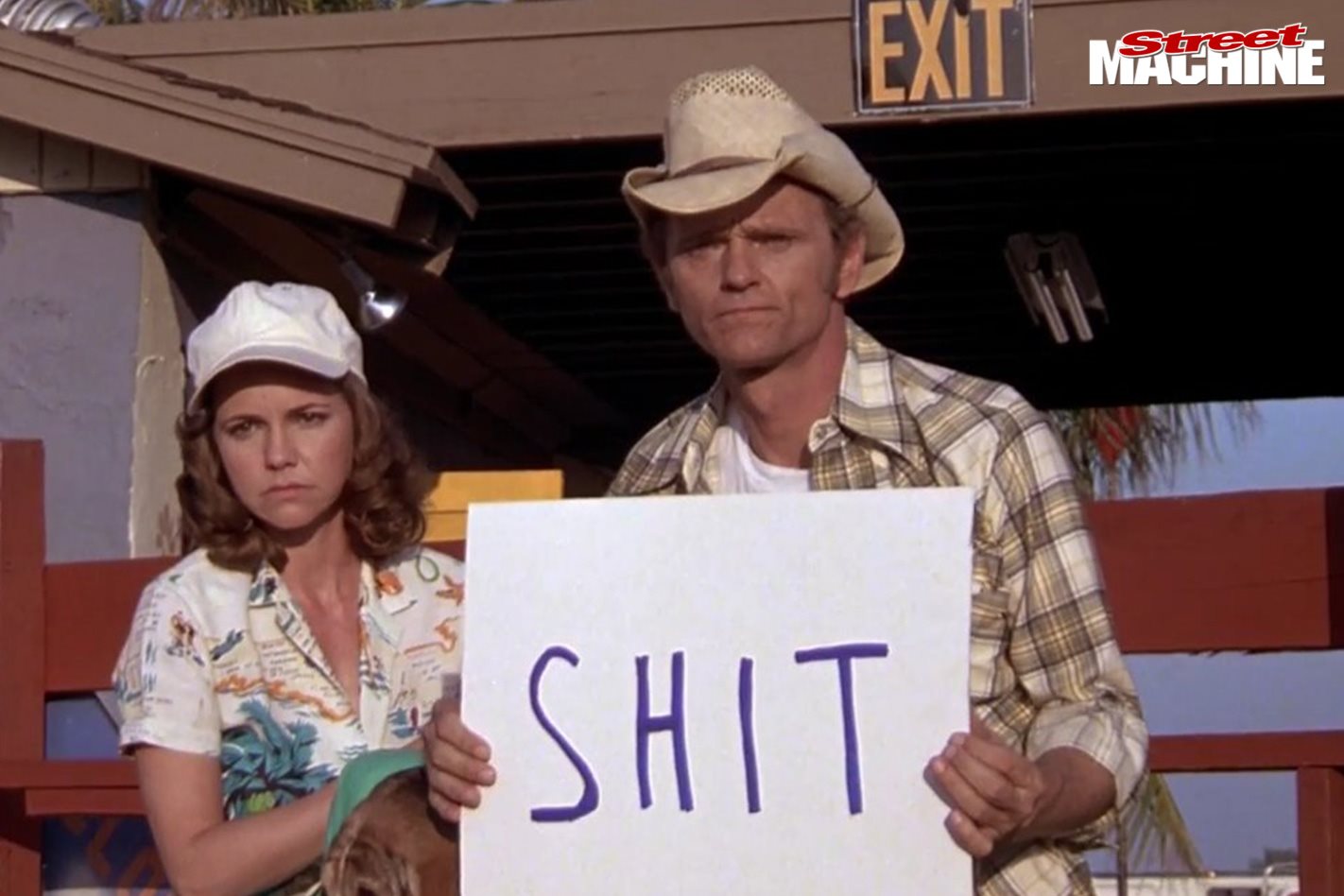 It’s 35 minutes into the film before Bandit and the sheriff face off; cue some southern banter followed by a sweet-arse jump, the kind that mesmerised you as a kid and now looks hilarious in high-def as the Trans Am flexes catastrophically upon landing and Sally Field is replaced by a grinning mannequin.

The crate, now discovered to contain a pregnant, full-sized elephant, causes the team to repeatedly pull over and stand around chatting, while Dom DeLuise appears from the back of an ambulance to riff uncontrollably in a faux-Italian accent. 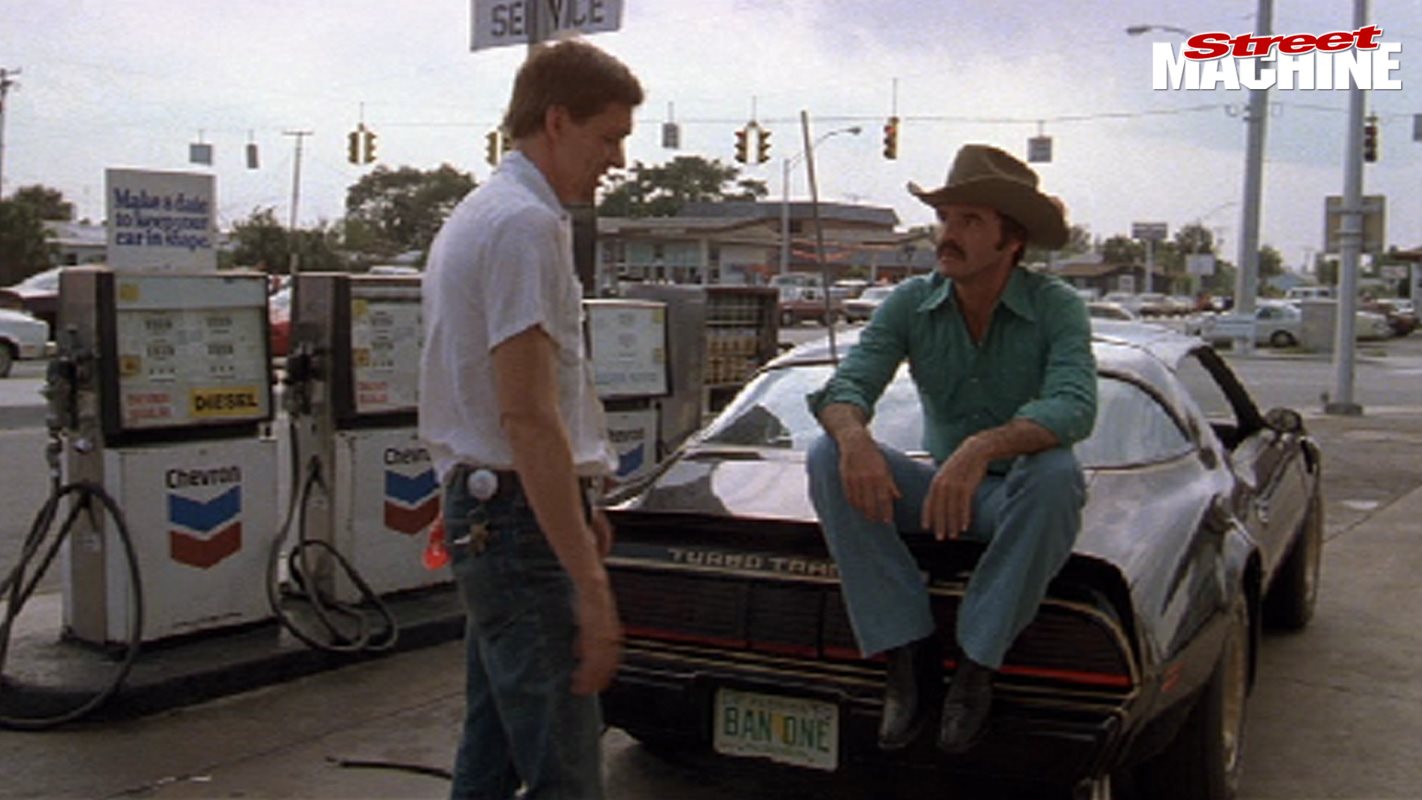 If you’re hanging for more car chases, forget it; the truck-based finale is ultimately unfulfilling, and the extravagant destruction of Dodge police cars was handled so much better in The Blues Brothers, released the same year.

But hold off on lobbing the TV controller at Gleason’s sweaty, oversized head. The film holds a few noteworthy moments; the dialogue between Bandit and Frog as he argues his fading status, describing himself as “one of the most beloved grassroots folk heroes of America”, is a standout, as is Bandit presenting Frog with a copy of his seven-inch single, Let’s Do Something Cheap & Superficial, a record Reynolds released in real life. And Burt’s red Trans Am jacket is worthy of the Smithsonian. 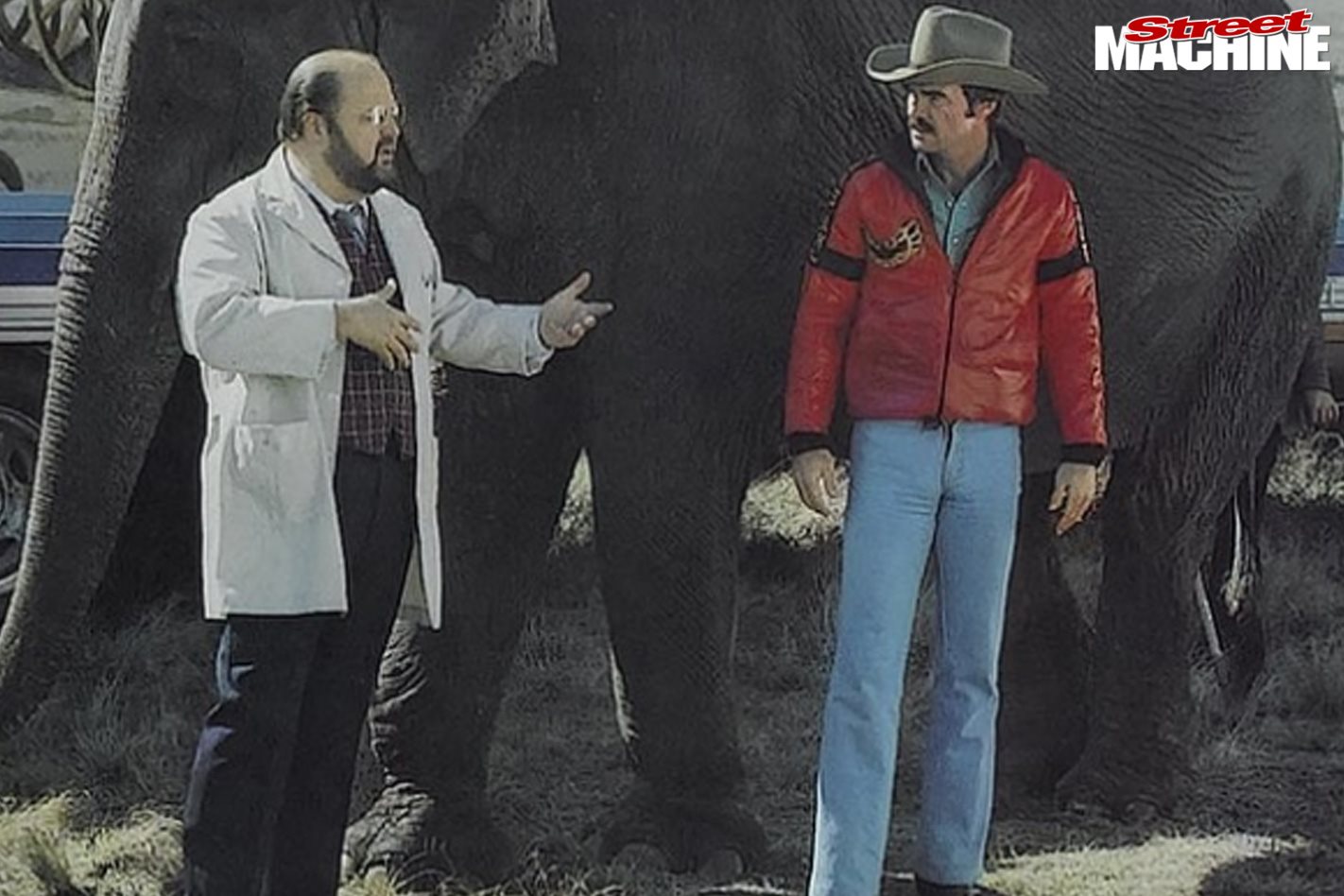 Don’t watch this solo; make sure there’s a six-pack for each viewer and start cracking the tinnies. You’ll enjoy the odd undercarriage-crushing jump, but don’t expect non-stop action or a sensible storyline. We’ve upped it half a point since Burt’s passing, based purely on the power of nostalgia. 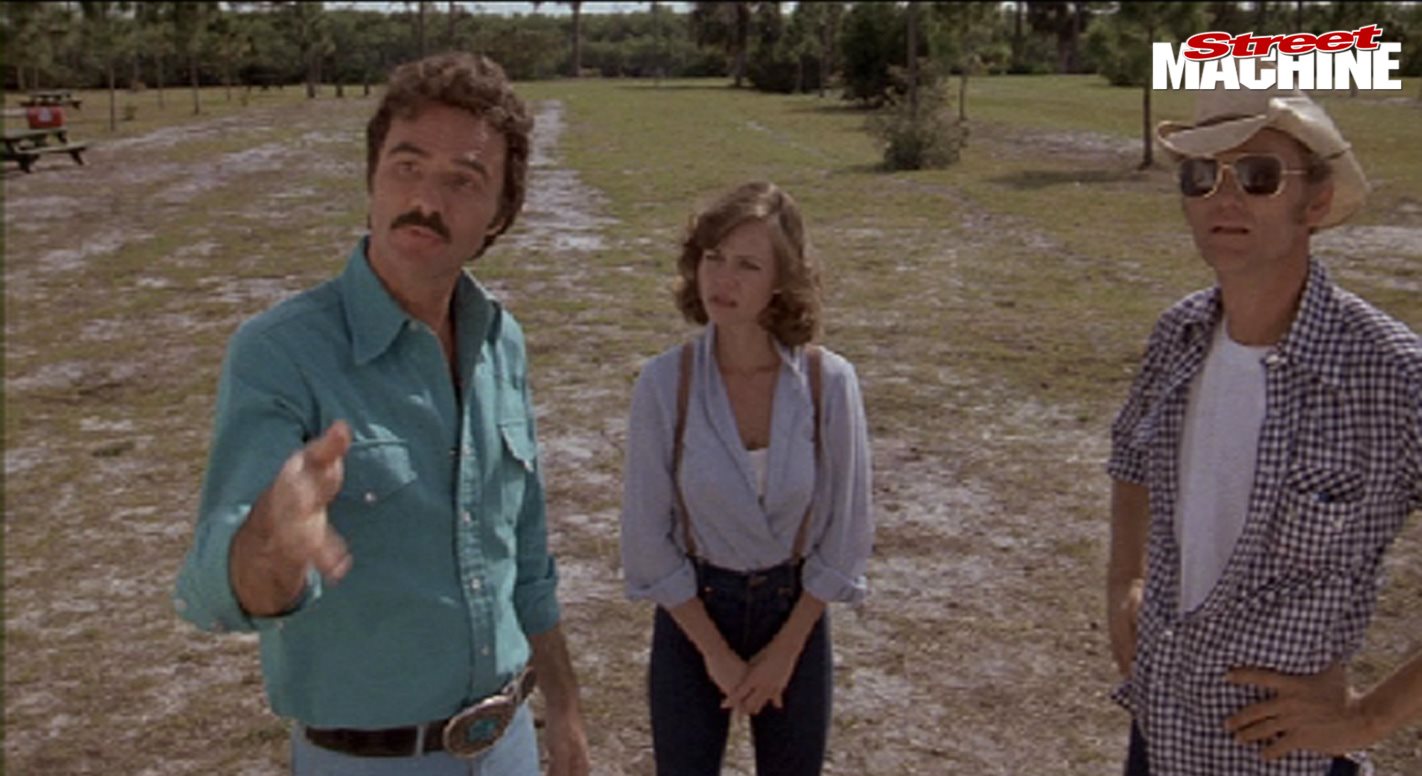 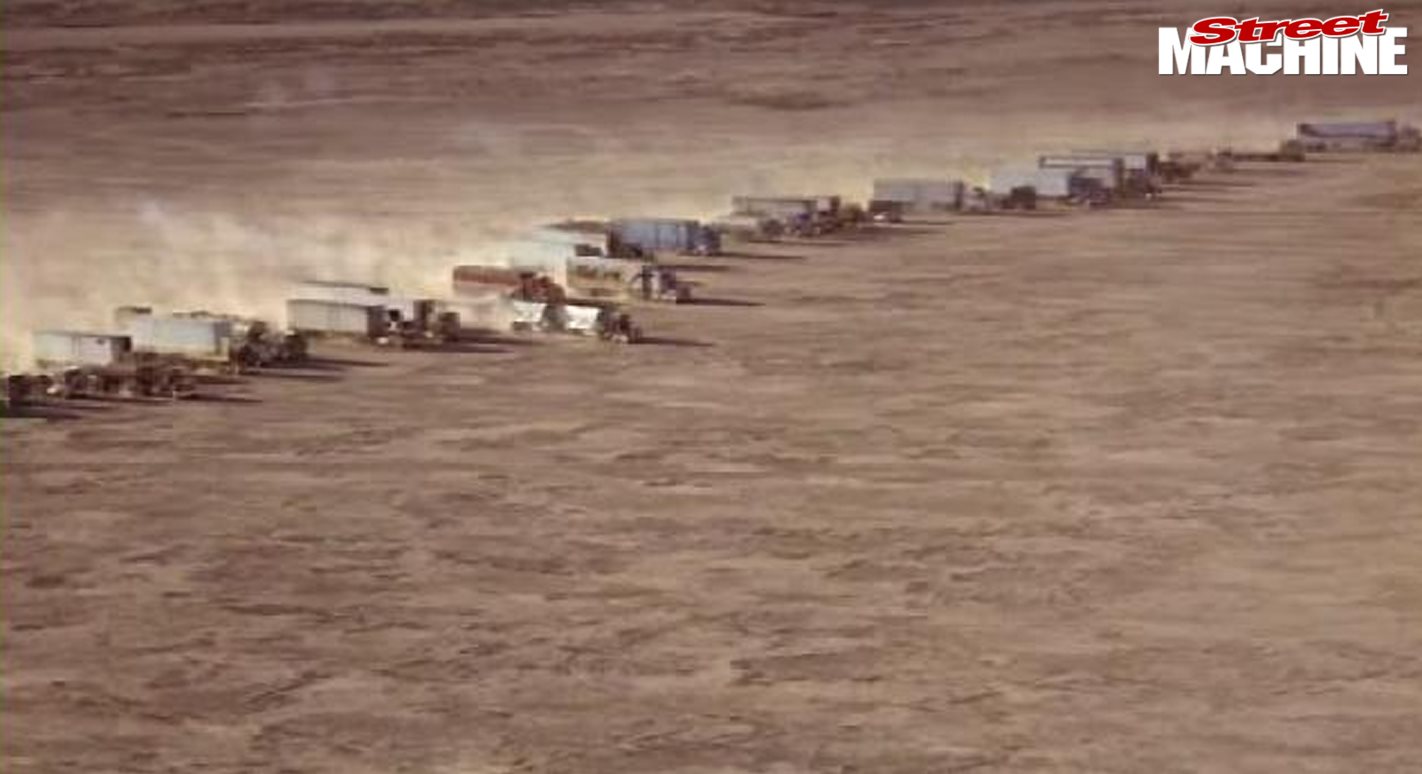 ACTION: Destruction of many Malaiseera General Motors sedans, including Sheriff Buford T Justice’s shapeshifting Pontiac police car multiple times over. Bandit pulls a few squealies and destroys a rollercoaster. A bunch of cop cars get wasted and some truckers circle the wagons to form an impenetrable phalanx.

PLOT: A washed-up Bandit and ever-enthusiastic Snowman unwittingly commit to transporting a pregnant elephant from Miami to Dallas. Swapping Bandit’s 6.6-litre Trans Am for the new 210hp 4.9-litre turbo, they enlist some friends along the way to help them avoid the long arm of the law.

COOL FLICK FACT:
The turbocharged 301ci LU8-powered 1980-model Firebird could only wheeze out 210hp, forcing the stunt team to wake up the movie cars with a shot of nitrous!