An Alfa Romeo restoration shop turns its hand to some classic US muscle, and the result is amazing

What happens when a pro Alfa Romeo restorer turns his hand to pro touring fun?

JUST about every feature car that Telf or Scotty lets me write about for Street Machine blows me away. It’s an honour to help Aussie street machiners tell their stories to all our awesome readers and viewers, and I just about always learn something about the craftsmanship, innovation and just plain hard work that happens every night after dinner in private garages – or every day in restoration shops – all around the country. 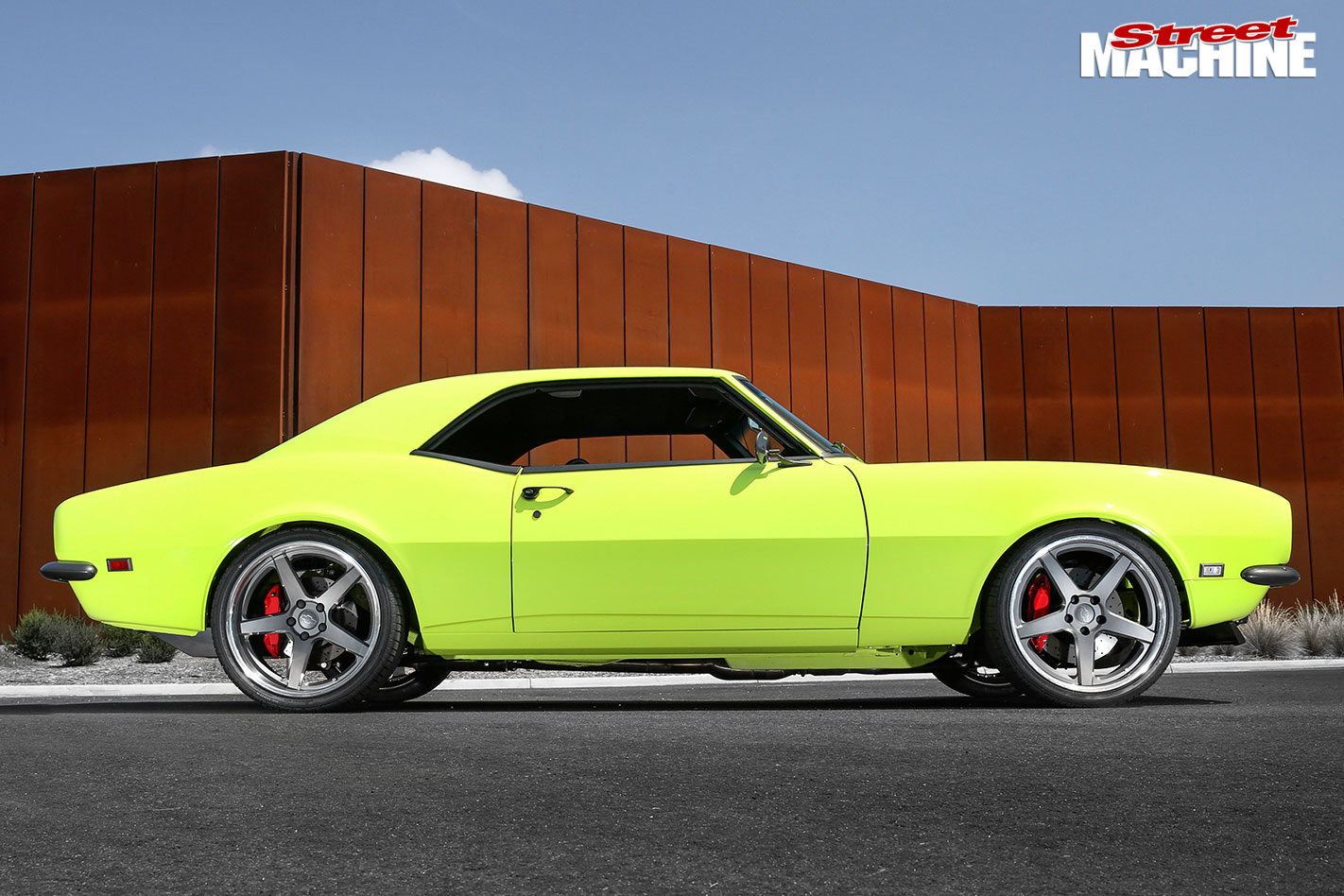 Every now and then, something comes along that blows me away even harder. And this green Camaro is one of those. 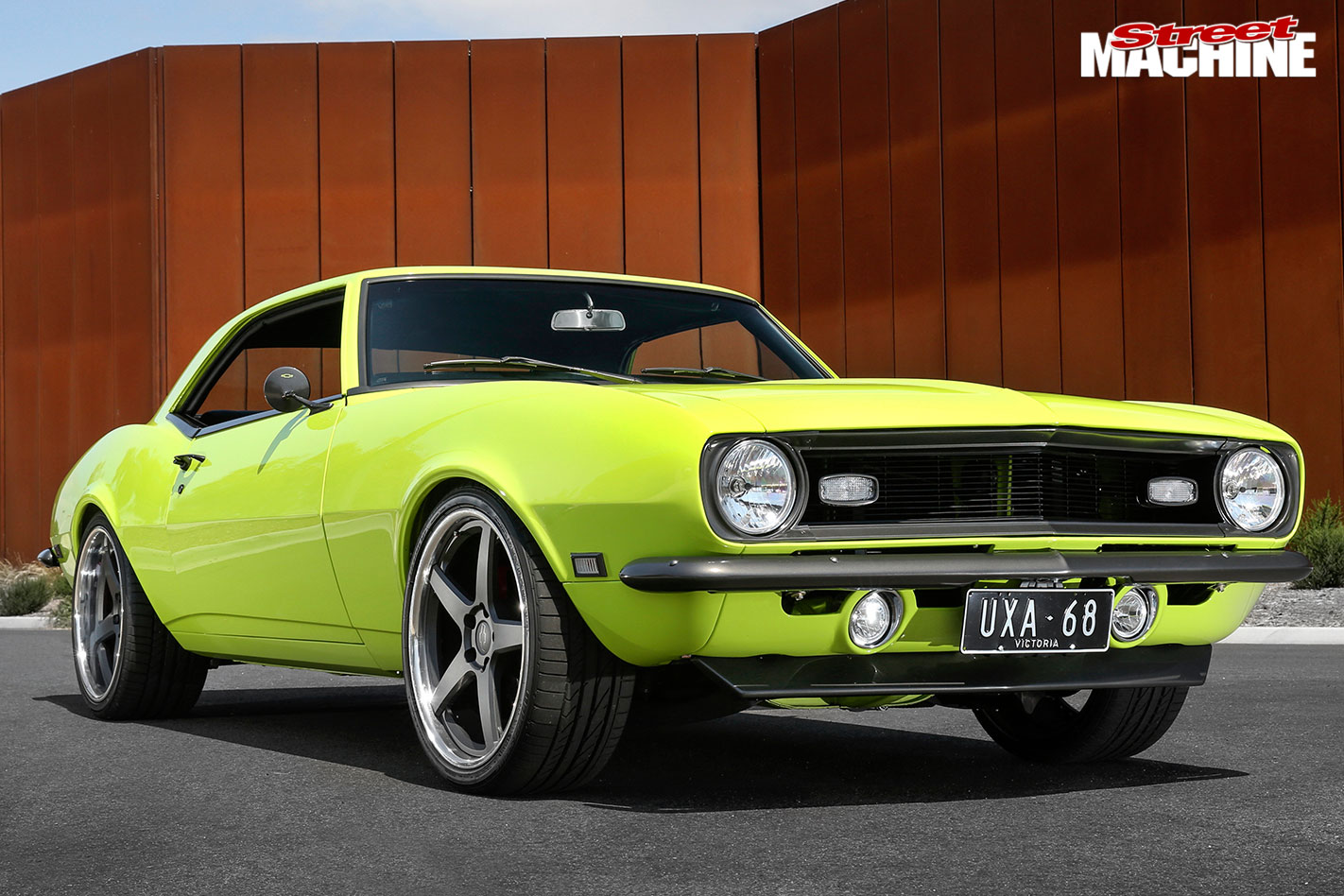 A charcoal finish completes the wheels, bumpers and grille surround, tying everything together. The centre of the grille is matte-black for a subtle contrast. The only deviation is the polished bonnet hinges – but the lads will be refinishing those for a 100 per cent match

It’s a commissioned build by Extreme Body Repairs in Dandenong for a shy 40-something Melbourne bloke who wanted all the stomp, stop and steer of a present-model HSV wrapped in a classic 60s Camaro, with a few style and substance upgrades. 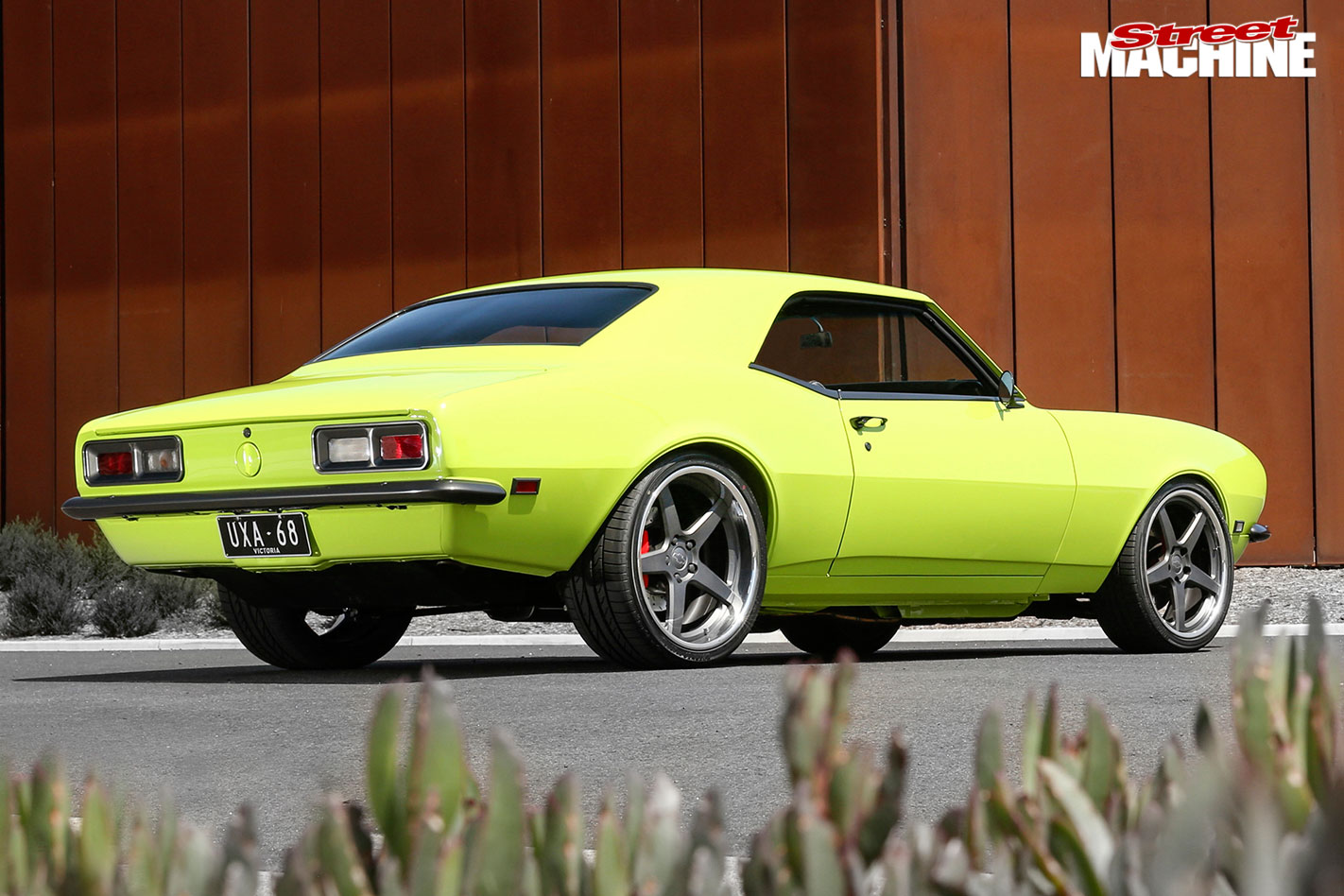 Mini-tubbed rear wheelhouses allow the 20x10 rims to fit. Colour is a 60s hue – yes, really – that looks bright without being eye-searing like some noughties Ford colours

Extreme Body Repairs boss-man Leandro (Lee) Parra, a bloke who spends a lot of his time working on European stuff, jumped at the opportunity to spin some spanners on a project oozing Yankee/Aussie muscle and style.

“I mainly do classic Alfa Romeos,” Lee explains. “But my customer wanted a nice Camaro that was useable. He wanted to be able to get in and drive it anywhere without compromise and in comfort.” 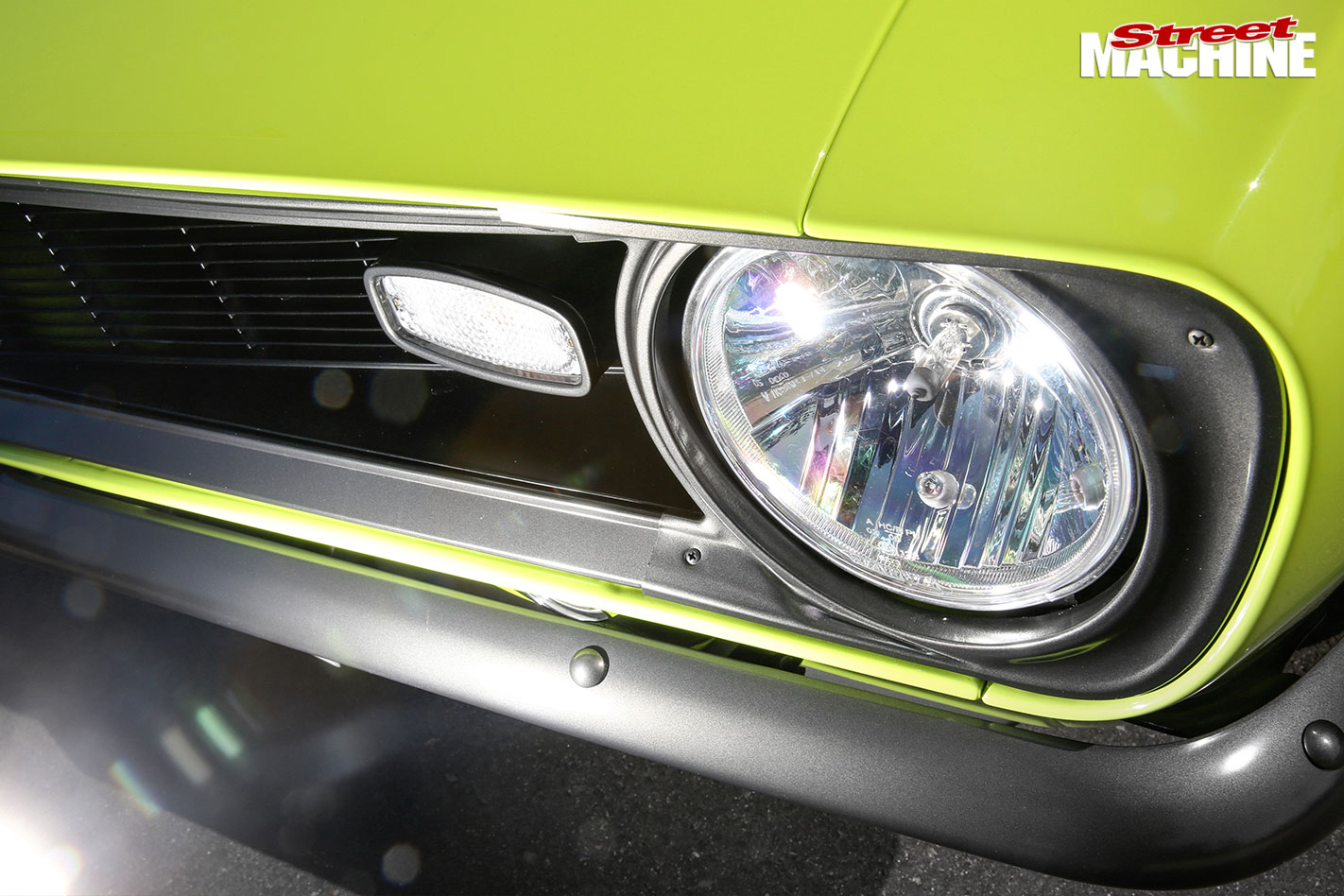 There’s a bit of SS-inspired style with the transplanted driving lights, too: LED inserts back-up the Narva headlights

There was plenty of planning and discussions with the owner. Lee always intended to use as many standard factory parts as possible. Sure, some street machiners might tut-tut at the use of off-the-shelf components, but Lee needed his customer to have ‘as-new’ parts and servicing in the future.

The benchmark was the owner’s other car, a late-model HSV, and the intention was to stuff the project – bought from the US, complete with bodgy repairs – full of late-model gear. 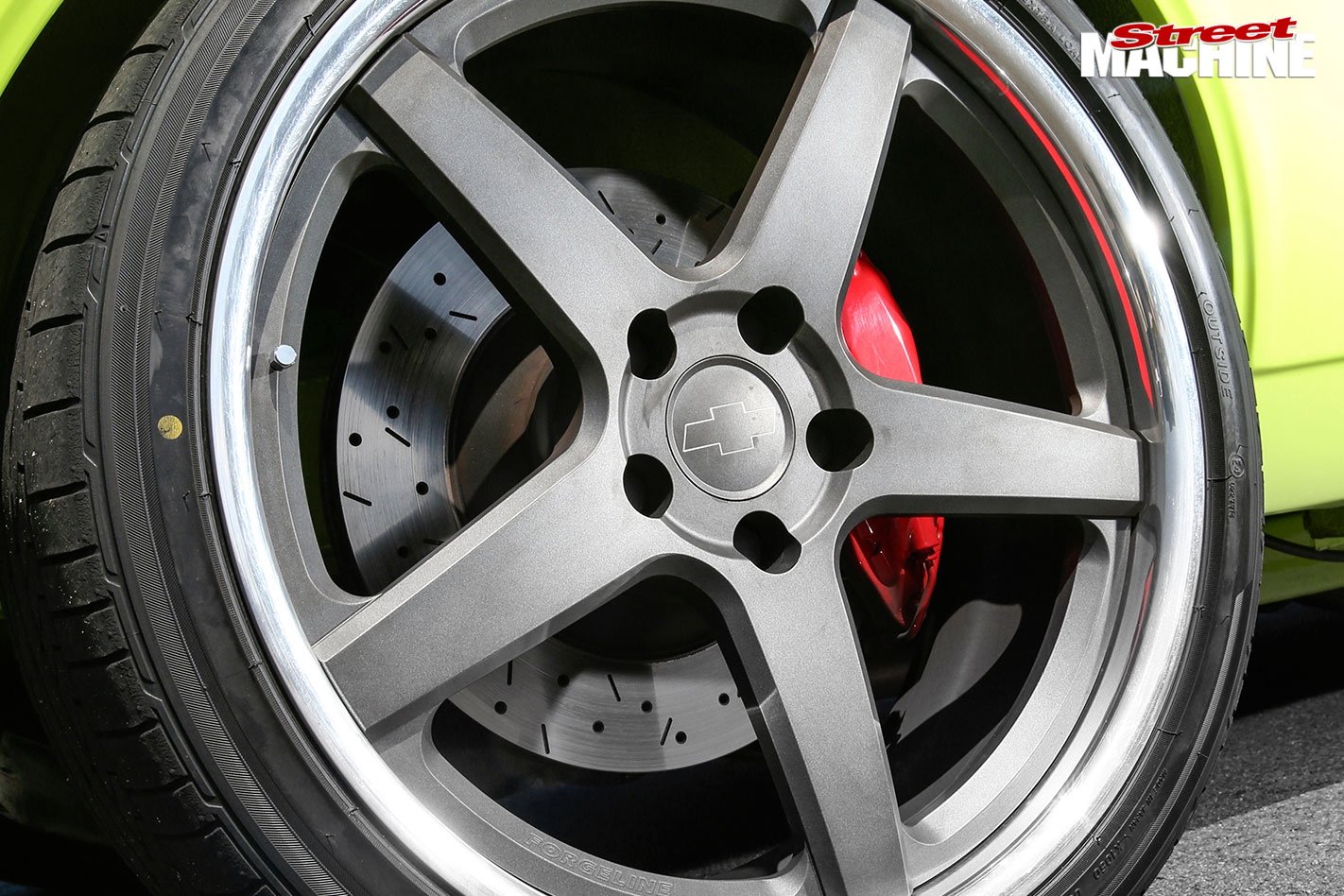 Wheels are 20x8.5 and 20x10 Forgelines. Brakes are all HSV-spec parts, so they work great and future spare parts will be dead-easy to source. The calipers did require one-off mounts to be machined, but they’re there forever so won’t cause the owner any problems in the future

“It was your typical American import,” Lee says of the Camaro he was presented with for the project. The rust around the wheelarches was easy to see, but there were a couple of patches on the floor, too. “It had a few issues,” Lee says with considerable understatement. “Oh man, they were shockers!” he recalls of some of the ‘workmanship’ evident in the Camaro. “The further I looked, the worse it became. The whole car had a skim of filler from nose to tail. 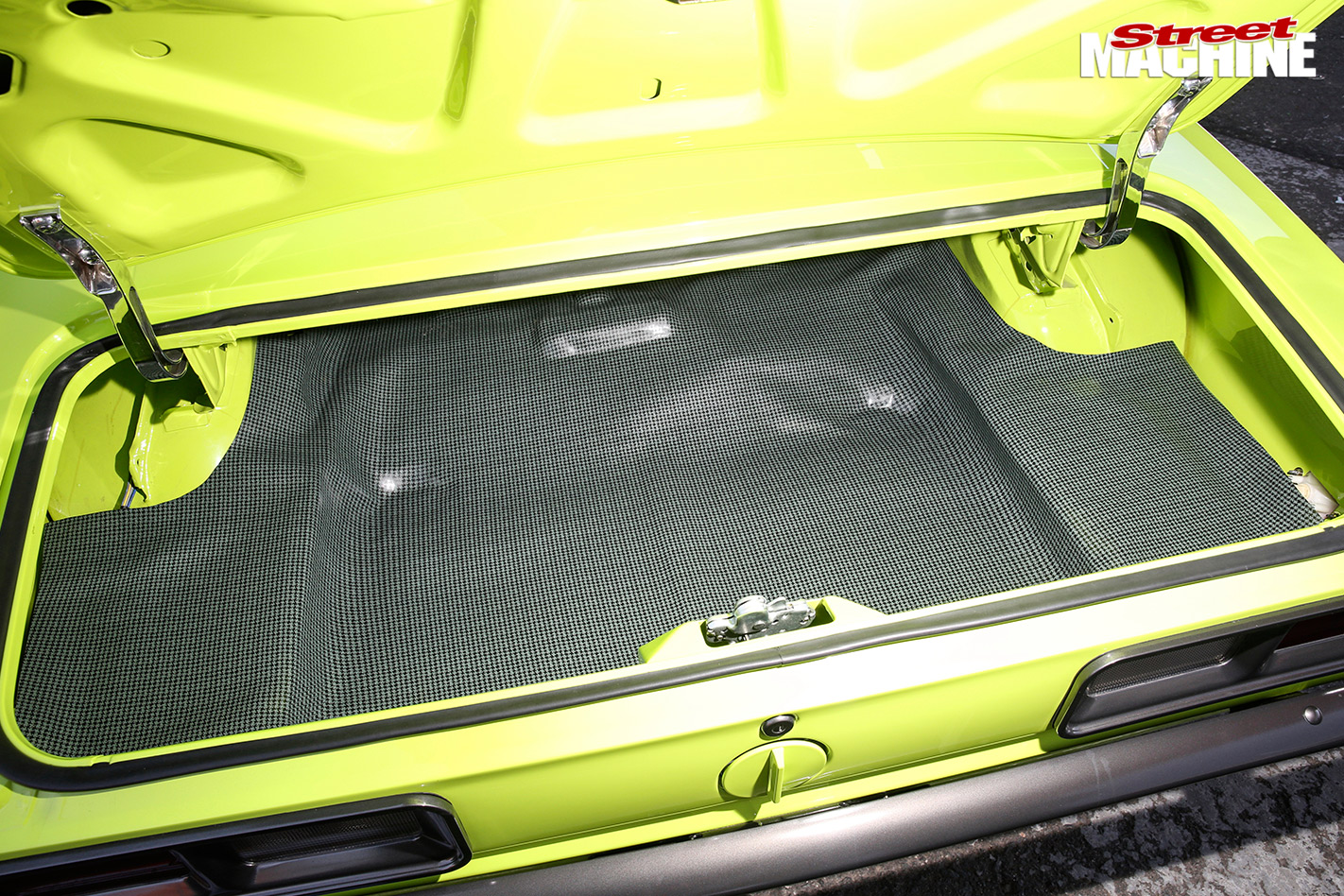 “One front guard had about an inch of bog in it. Really! They hadn’t even knocked out the dent!”

The shell was taken back to its birthday suit using stripper and mechanical sanding. Those lovely lithe rear quarters are new. “You can’t simply cut the old ones off and – bang – put these on,” Lee explains. “The tooling is not quite 100 per cent, so they need some massaging to fit properly. But they’re better than nothing, especially if a car is crash-damaged.” 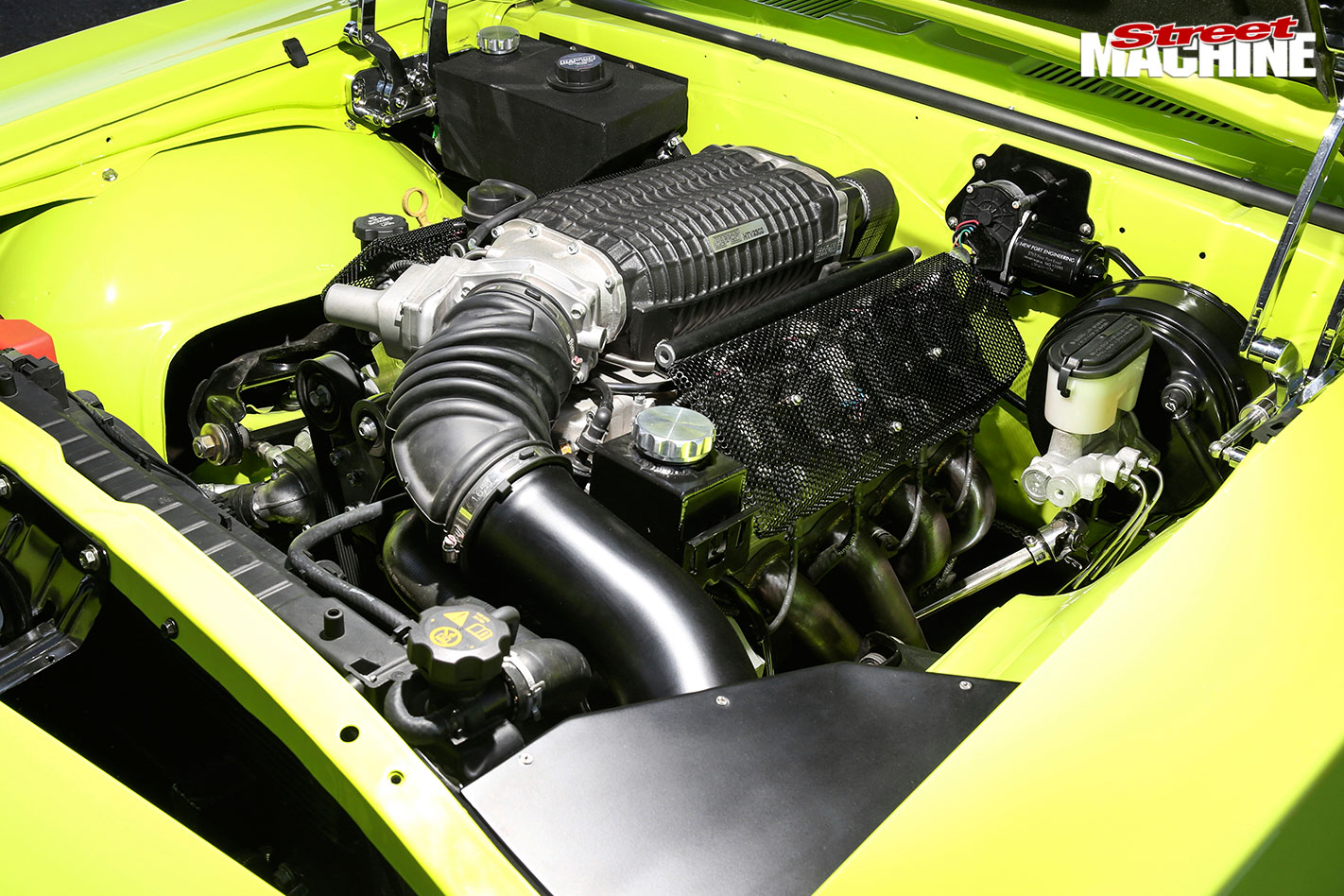 An LS3 plus Harrop blower is a no-brainer for bulk, reliable power, while a VE radiator and fans keep things cool. The reservoirs on the left-hand side of the firewall are for the intercooler and washer bottle. Rather than restore the factory wiper motor, Lee fitted a replacement from New Port Engineering, with bonus intermittent feature

The big-grunter engine is a GM LS3 6.2-litre V8 pumped up with an Aussie-developed Harrop supercharger. It’s all stock-spec stuff, with Lee sourcing the motor new from a crate rather than from a write-off. 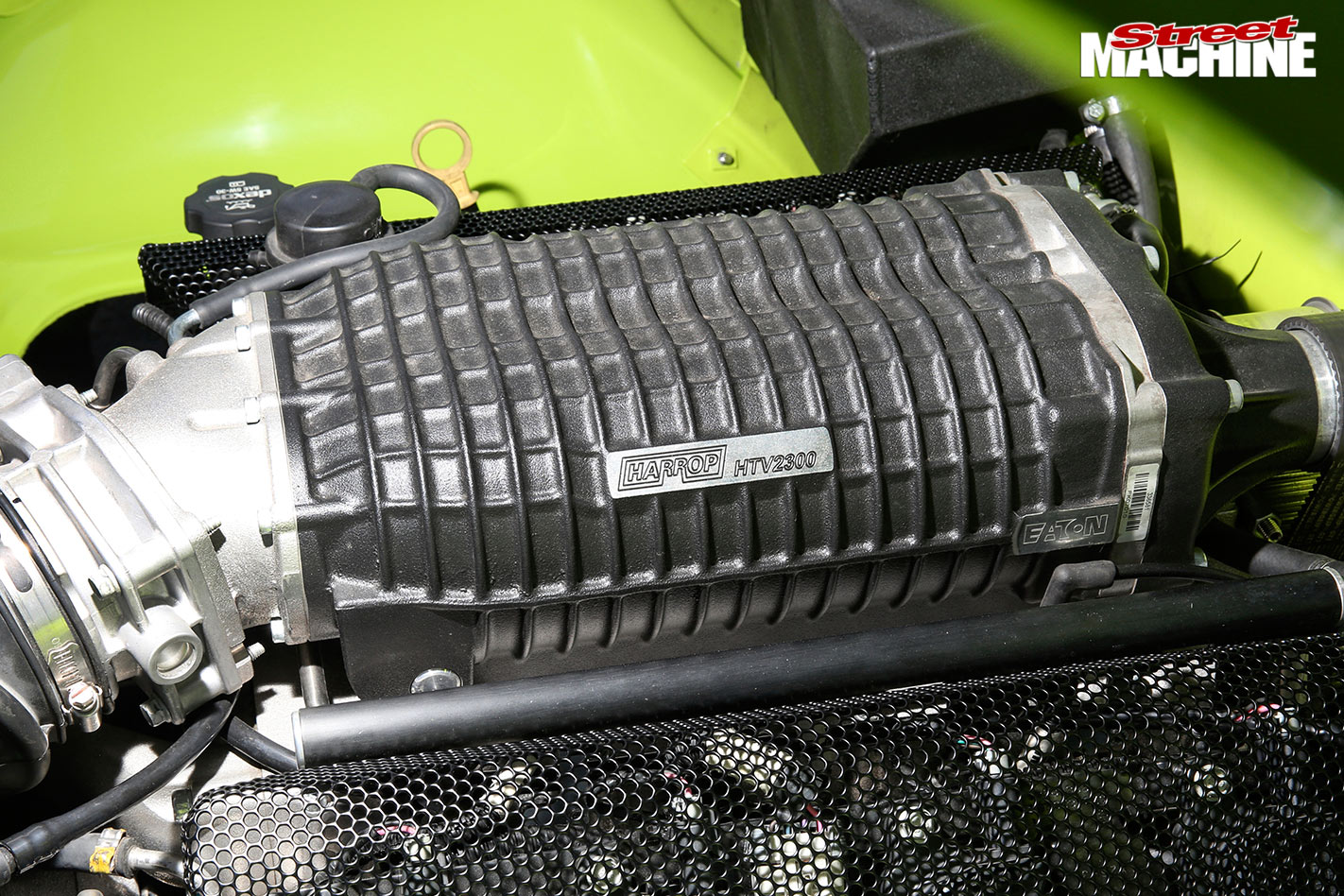 “We discussed a manual, but he wanted the easy cruising of an auto,” says Lee of his customer’s wishes. A Commodore VE six-cog slushbox is a little too large for the Camaro tunnel, so the auto is a four-speed GM 4L85E available as a crate component, too. It is controlled with a stand-alone black box that interfaces with the LS3’s drive-by-wire management system. Using a factory VE Commodore auto shifter means the box has a manual-shift mode, too. 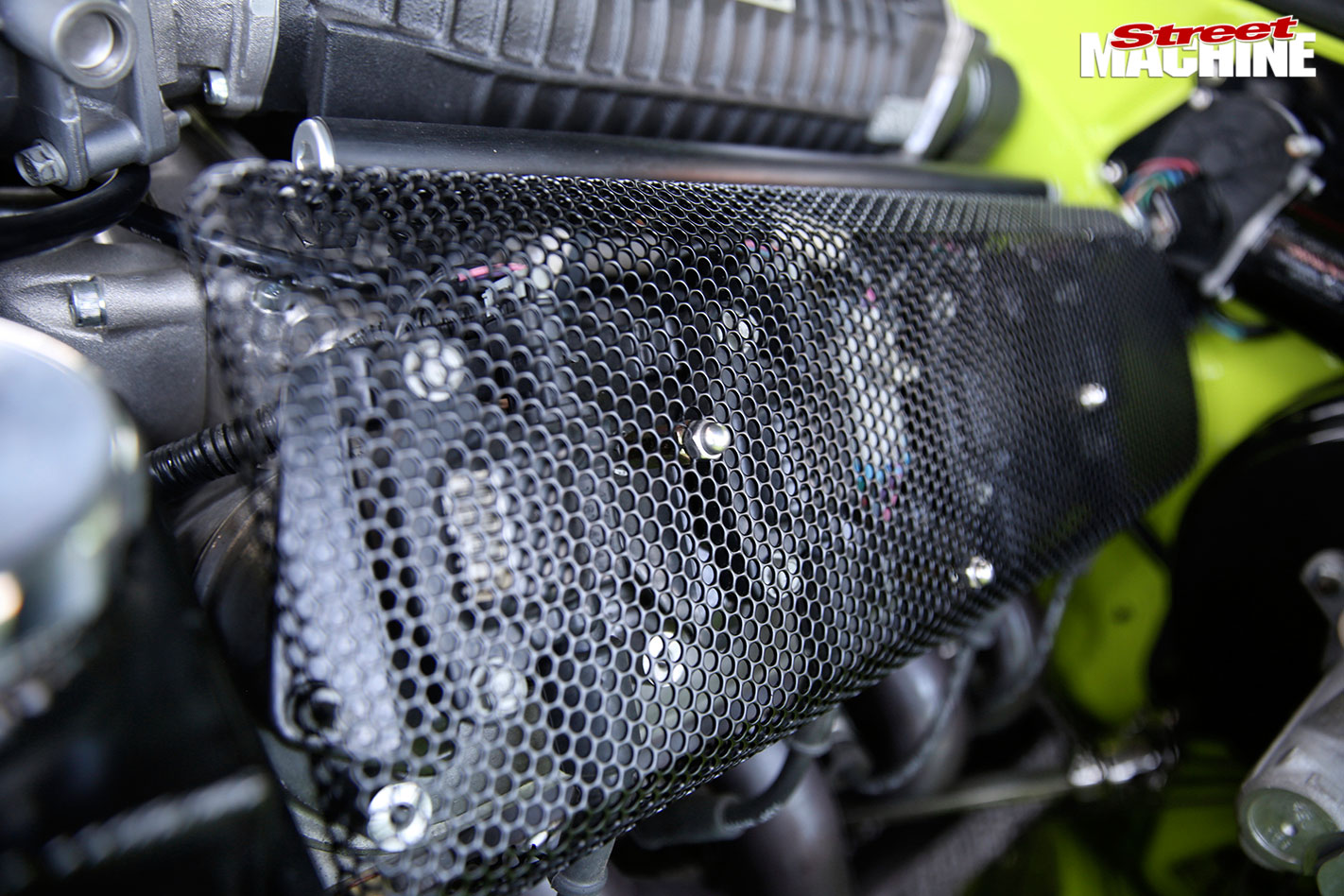 “It fitted in the tunnel,” Lee says. “We didn’t have to modify the body; we didn’t have to chop anything. All we had to do was make new rear crossmember mounts, as the box is about four inches longer.” Lee admits it’s been a challenge getting his head around the tuning of the engine and trans, but now he has a feel for how it all works, he’s ready for more! 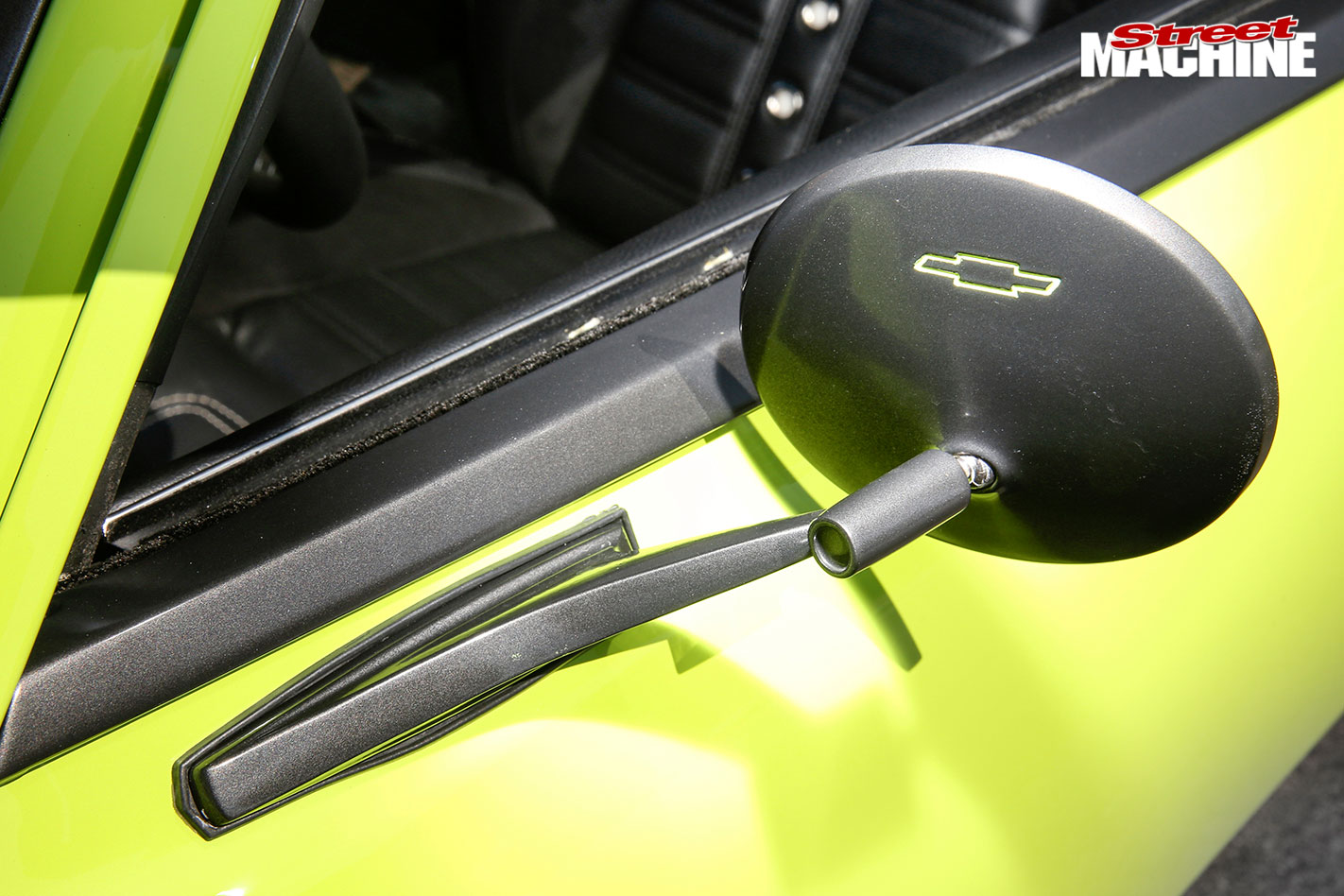 Lee modified the nose of the Camaro to use a VE Commodore radiator. “It’s a $300 or $400 part,” he explains. “It works, there’s no overheating issue and the fans work incredibly well, which is what you need for a street-driven car.” That ‘off-the-shelf’ philosophy extends throughout the car, from the interior trim to the brakes.

With a background in European cars – even if they’re rusty ones! – Lee found the suspension under the Yank classic to be an eye-opener.

“Now I know why they drive so bad!” he laughs. 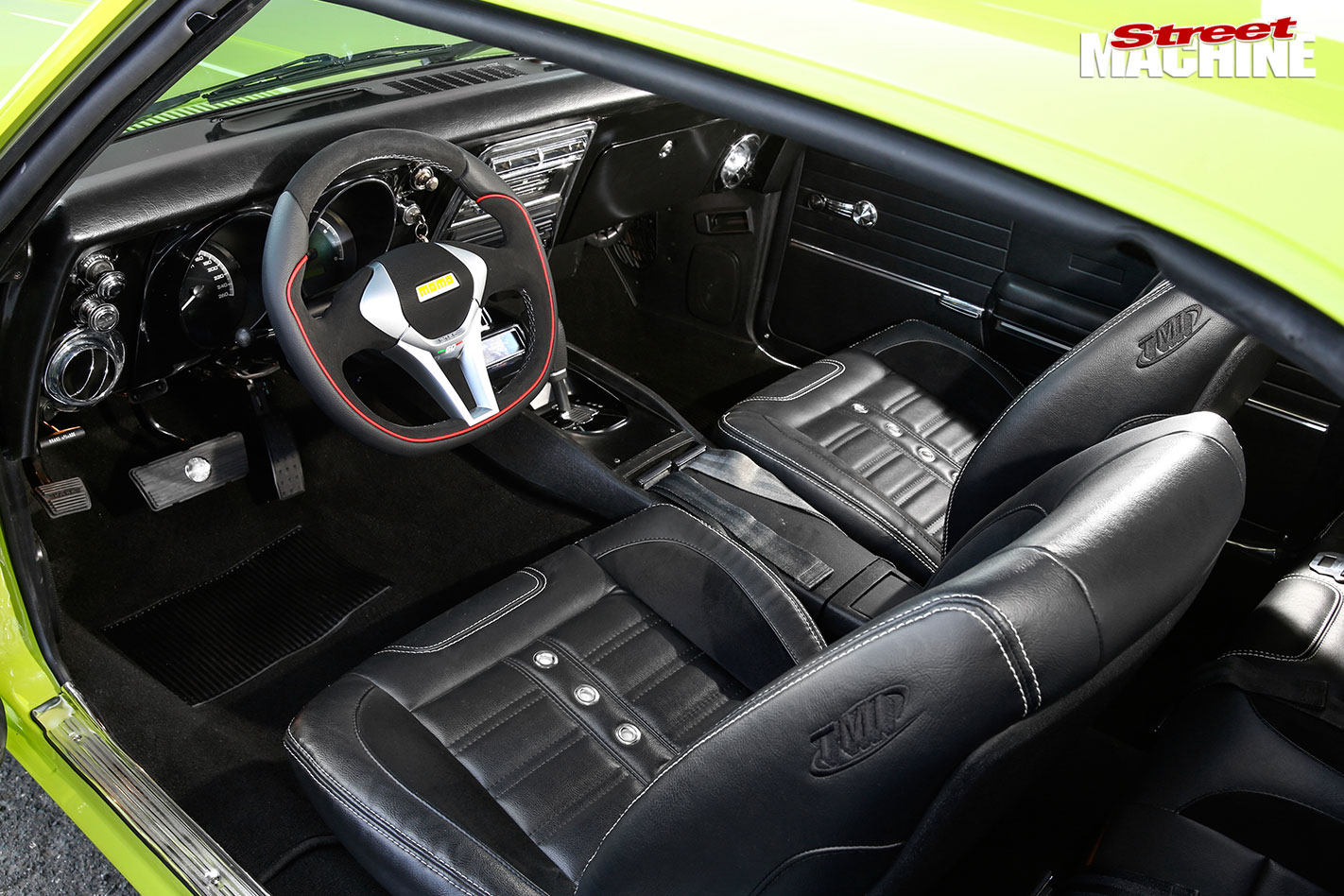 The Dakota Digital instruments offer old-school analogue looks, 100 per cent accuracy and features such as an over-rev tell-tale. Lee had dramas with US replacement dash pads not fitting, but found what he needed at Dash Original in South Oz

Lee looked at Corvette-based aftermarket suspension kits but decided the front suspension had the bones of a good-handling system – as long as he could introduce some European-style finesse. The steering is now power rack-and-pinion and Lee is still playing with camber/castor spacers on the top control arms to give the Camaro the front-end bite and steering feel it deserves. Under the rear the standard leaf springs have been replaced with a four-link arrangement and adjustable coil-overs. Lee says he wanted to install a Watt’s link, but there simply wasn’t enough space. A Truetrac torque-biasing centre helps with traction control and handling, too, without the clunks and car-kicking on/off characteristics of conventional LSDs. 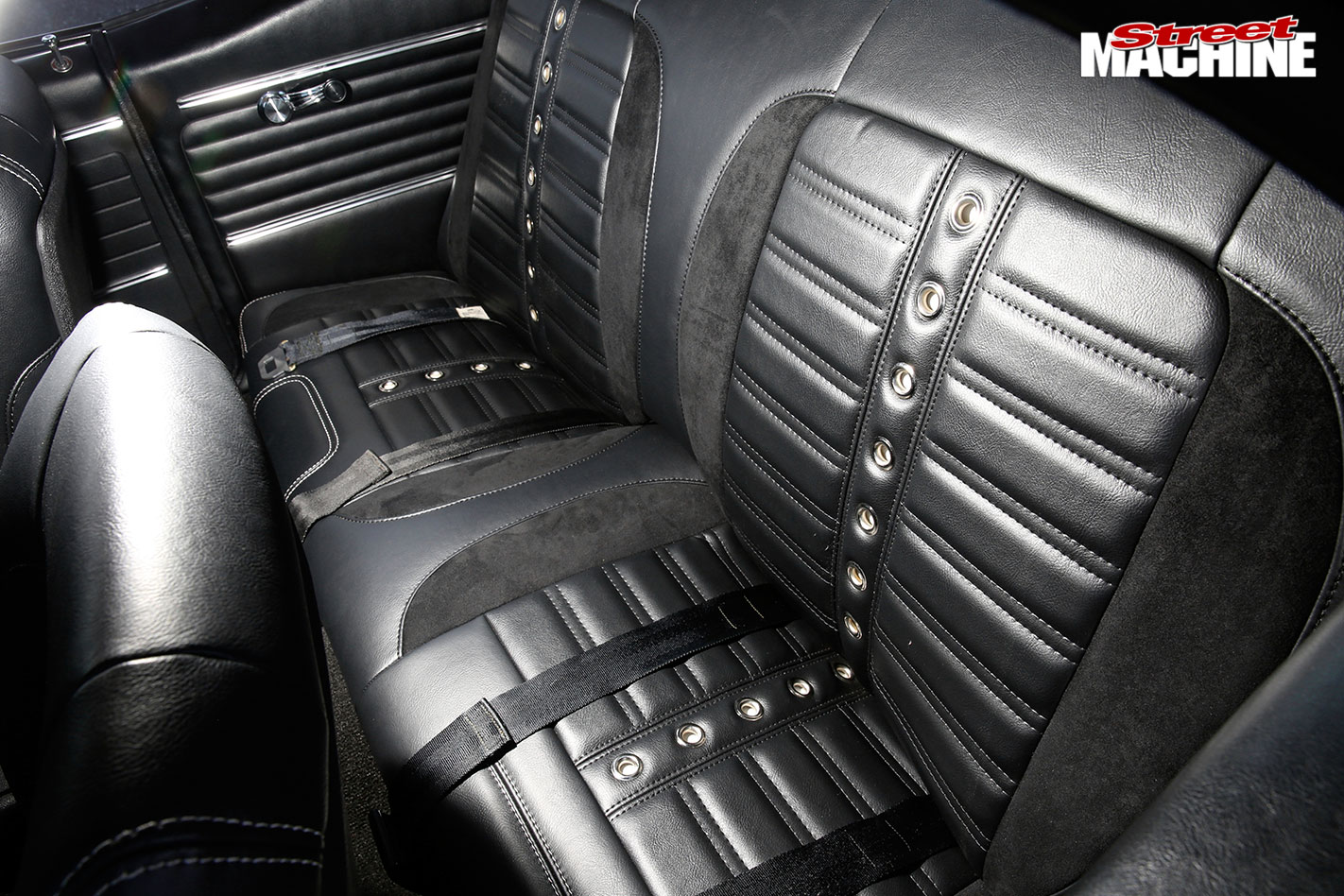 Most of the interior upgrade was derived from a DIY solution from US company TMI. They provide over-sized foam bolsters and tasty trim kits to upgrade factory seats. It looks great and allowed Lee to keep the dollars down and the useability – and quality – up for his customer

With the transplant crate engine, Vintage Air air-conditioning, four-linked nine-inch rear and a few other tweaks such as the VE radiator, the Camaro was mocked up before being stripped down for the final paint. During the build, Lee had plenty of dramas with the poor fit of aftermarket components, and he didn’t want any more hassles after the paint went on. 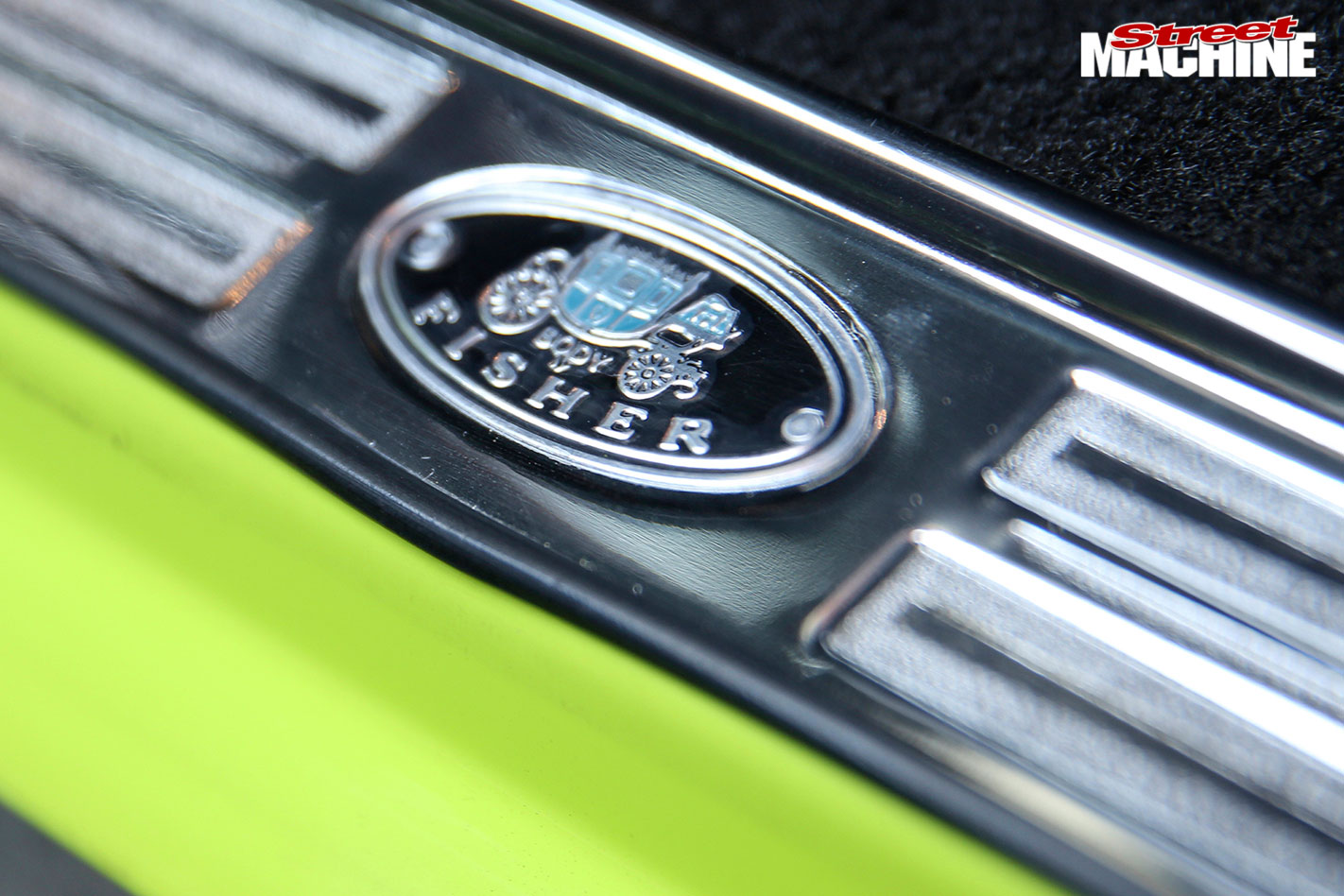 “I reckon one-quarter of what we looked at actually made it onto the car,” he says. “For instance, the dash pad wasn’t quite the right shape. The glass was a hassle, too. So we test-fitted everything. That way, there’s no ‘Oh shit, I forgot to drill that hole!’ or any other issues. We did all the suspension, the wiring, the exhaust, we made the tailshaft – the car was just about driving.”

Once that was done, Extreme’s gun-man, Tony, laid on the secret colour. Lee assures us it’s also an off-the-rack formula for easy future matching, if it’s required. “As soon as you go to a fancy colour, it’s difficult to repair,” he reckons. 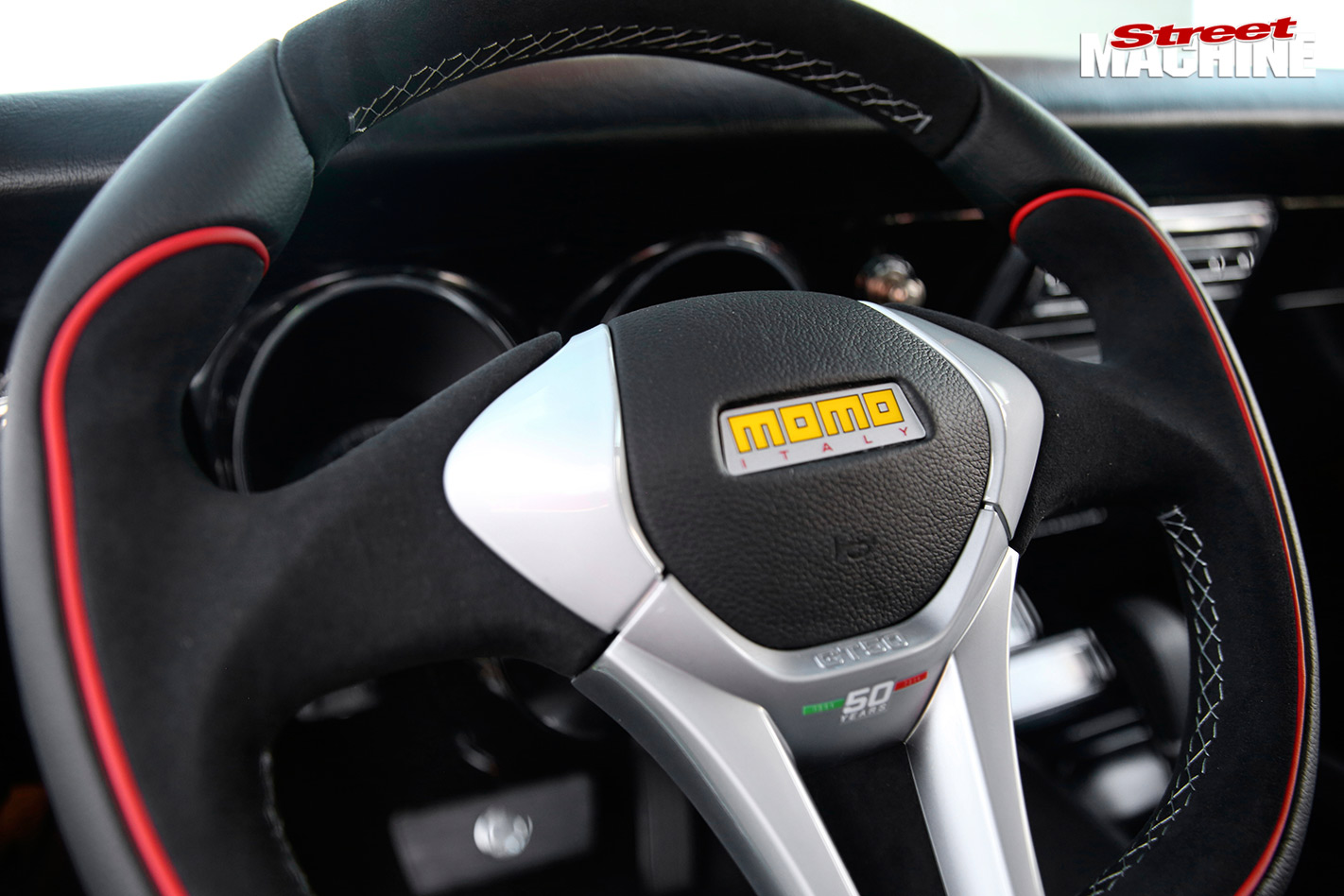 “It’s a really easy and fun car to drive,” he says. “But the aim wasn’t just to build a fast car, but a driveable one. It does whatever you want it to. You can pussy it; at 100km/h it’s only doing about 1600rpm, just loping along exactly the same as a modern car.

“But if you put your foot into it – let’s just say, it makes you pucker!” 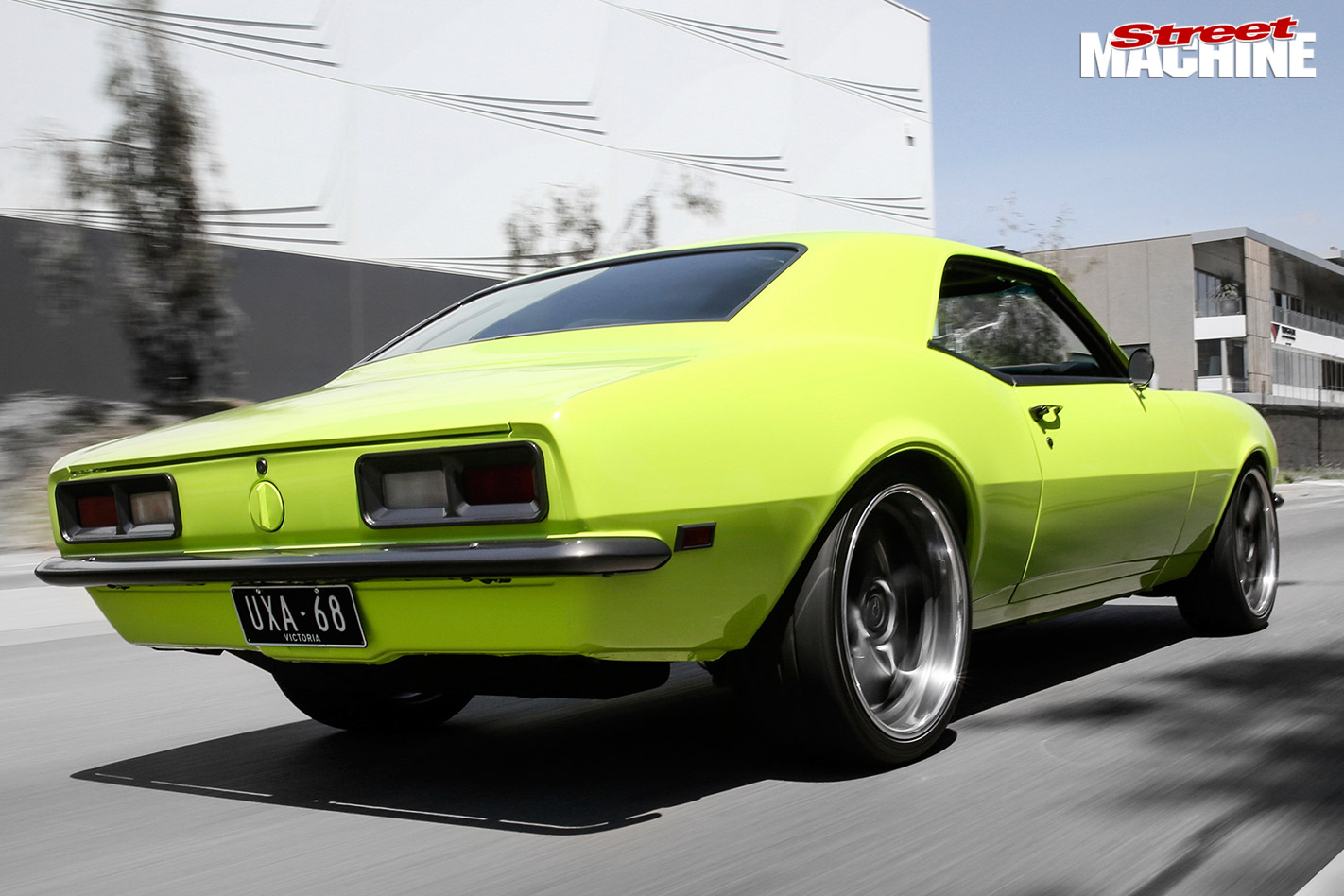