ANDREW Micallef from Ballarat bought this LJ Torana in 2011 as a complete rolling body. “It was already tubbed, with the back-half chassis and ladder-bar rear end when I got it, but there was still a lot to be done before it hit the drag strip,” Andrew says. “We made a heap of changes to the car and set it up for radials. I ended up going with the 355 combo just to be different I s’pose, and I hate LS1s so there was no way I was putting one of those bloody things in it!”

Built by SJH Race Engines in Ballarat, the twin-turbo 355-cube Holden has run a best quarter-mile time of 8.23@167mph. “SJH builds race endurance 4.2s and 5.0s, and I figure if they can get them to hang together doing endurance boat stuff, then they really know their Holdens,” Andrew says.

The engine is based on a grouted VT-series block with a Harrop crank and Scat rods, SRP pistons with 10.5:1 compression and topped with heavily modified factory VN heads, worked over at Specialised Power Porting, where Andrew works. As far as camshaft specs, Andrew’s not telling: “Let’s just say it’s a big flat tappet,” he laughs. 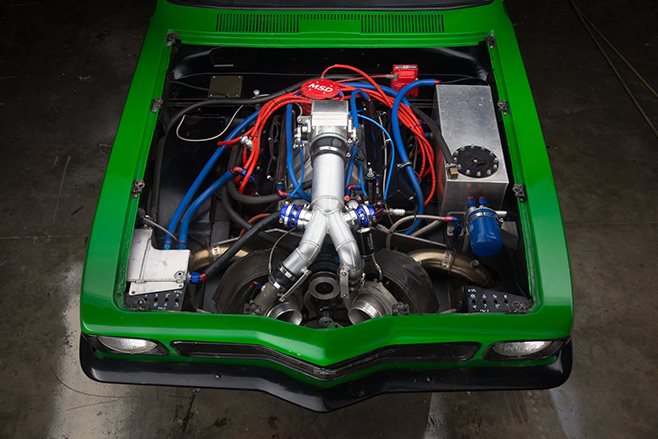 The 16lb of boost comes from twin 66mm Pro Boost P4 turbos. “Ryan at Race Pipes mounted the turbos, fabricated the pipework and custom intake. He does some great work.”

A single throttlebody feeds into a Torque Power manifold that Andrew modified for the injectors. “Tuning and maintenance is done by Andrew Sanders, Bugsie, Bretto and myself. The computer is an Autronic SM4 with a Haltech methanol wide-band controller and 225lb Billet Atomizer methanol injectors.” Andrew is a fan of methanol. “I love the stuff! It keeps everything cool and it’s safer to tune with. We set up a bit fat, that’s why it lives; I’d rather change oil than hurt pistons. You hear of a lot of people having oiling dramas with Holdens, particularly on methanol, but we haven’t had any. It runs a factory-style oil pump, good-quality pan, good oil pressure and regular oil changes, that’s about it.”

Backing the 355 is a full manual Powerglide built by MDT Automotive, with a 4000rpm stall converter. Rear end is a nine-inch, running 35-spline Strange axles and 3.55:1 gears. Satin Center Lines wrapped in 315 radials get the power to the ground. 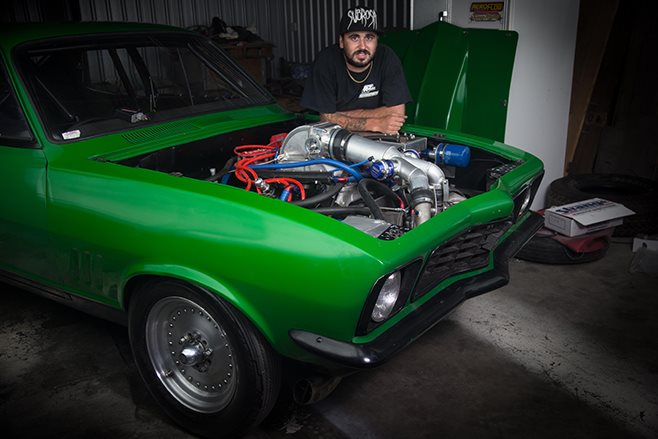 “It’s been a bloody handful to drive; off the line and heading down the strip it was all over the place,” Peter says, “but after a couple of days’ test and tune in Sydney things have improved heaps.

“We ended up chucking some stock shockers in the front of it and that’s when it ran the 8.23. It’s got custom-made TRZ Motorsports shocks now and they’ve settled it down a heap more. We went 1.25sec over the 60ft on radials at Portland last time out.”

The 355 has been sold off, with bigger and better things to come, but Andrew is tight-lipped about the replacement. “It’s more cubes and a big single turbo; other than that I’m not saying, you’ll just have to wait and see.”