WHEN the April sun is shining, there isn’t a cloud in the sky, and the Heathcote Park Raceway pits are filled to the brim with some of GM’s best and baddest cars, you know the Holden Nationals are back in town. Now in its fourth consecutive year, the Tuff Mounts Holden Nationals has become one of the greatest single-make car events in the country, and the 2019 outing broke records both on and off track.

Todd Foley is the Holden Nats mastermind and, after selling out all 175 entries in just five days, he knew it was going to be a cracker. “I knew we’d get plenty of support, as people were busting my balls for the entry for ages,” he said. “We opened entries on a Monday and they were sold by that Saturday; last year it took two months to sell out the same amount of spots.”

The event has exploded in popularity in recent years, with many competitors hailing the quality of racing as a major drawcard. The principle is quite simple: the event is open to Holdens (obviously), but also other makes running Holden or Chev powerplants. There are four different classes: Holden Aspirated, Holden Boosted, LS Boosted and Outlaw. All the racing is dial-in, with competitors getting three qualifying runs to set their desired times before eliminations start. What this means is that a race can boil down to an eight-second car chasing down a 10-second car, with a two-second handicap. The pressure to not break out of your dial-in is huge, making it a tightrope exercise in both speed and self-control.

For what is ostensibly a one-make event, the variety of cars in the lanes this year was vast, from a VS Commodore ute hiding a turbo Ford Barra six under the bonnet, to an HB Torana (a rare sight these days!), and even a few L67 V6s making their claim amongst the V8 boys. The Holden Aspirated class was where you found heaps of angry old-school muscle, with plenty of ear-bashing V8 thunder. Dom D’Agostino won the class this year in his nine-second, 690hp LX Torana hatch, after Caine Reed jumped the gun in his HB Torana and red-lighted in the final.

With the newfound interest in turbo iron lions, along with RB-powered VLs, the Boosted Holden class was also a hotbed of variety and action. One minute an RB-powered kebab machine came screaming down the track at full boost, the next an old-school Holden V8 being gassed to the hilt with nitrous. At the end of play, Paul Surkitt took out the class win in his 355-powered LJ Torry, beating Chris Bateman’s LH in an all-Torana shootout.

Holden Nats regular Bren Threlfall inscribed his name on the Outlaw class trophy with his carb-fed LS2-powered UC Torana, while the rest of the packed Boosted LS class were chasing the tail-lights of Cameron Jones’s eight-second HQ ute at the end of the day. The Quey is a freshly completed package for Cameron, who got around Troy Leishman’s blown VZ SSZ sedan in the final.

Todd Foley reckoned this year’s Holden Nats was a roaring success and was stoked with both the quality of racing and the turnout. “This year was probably our best event yet,” he said. “A record number of entrants and spectators through the gate was awesome to see!”

While Todd hasn’t even thought about what’s next in 2020, there is no doubt that the Holden Nationals will continue to grow, and we can’t wait. 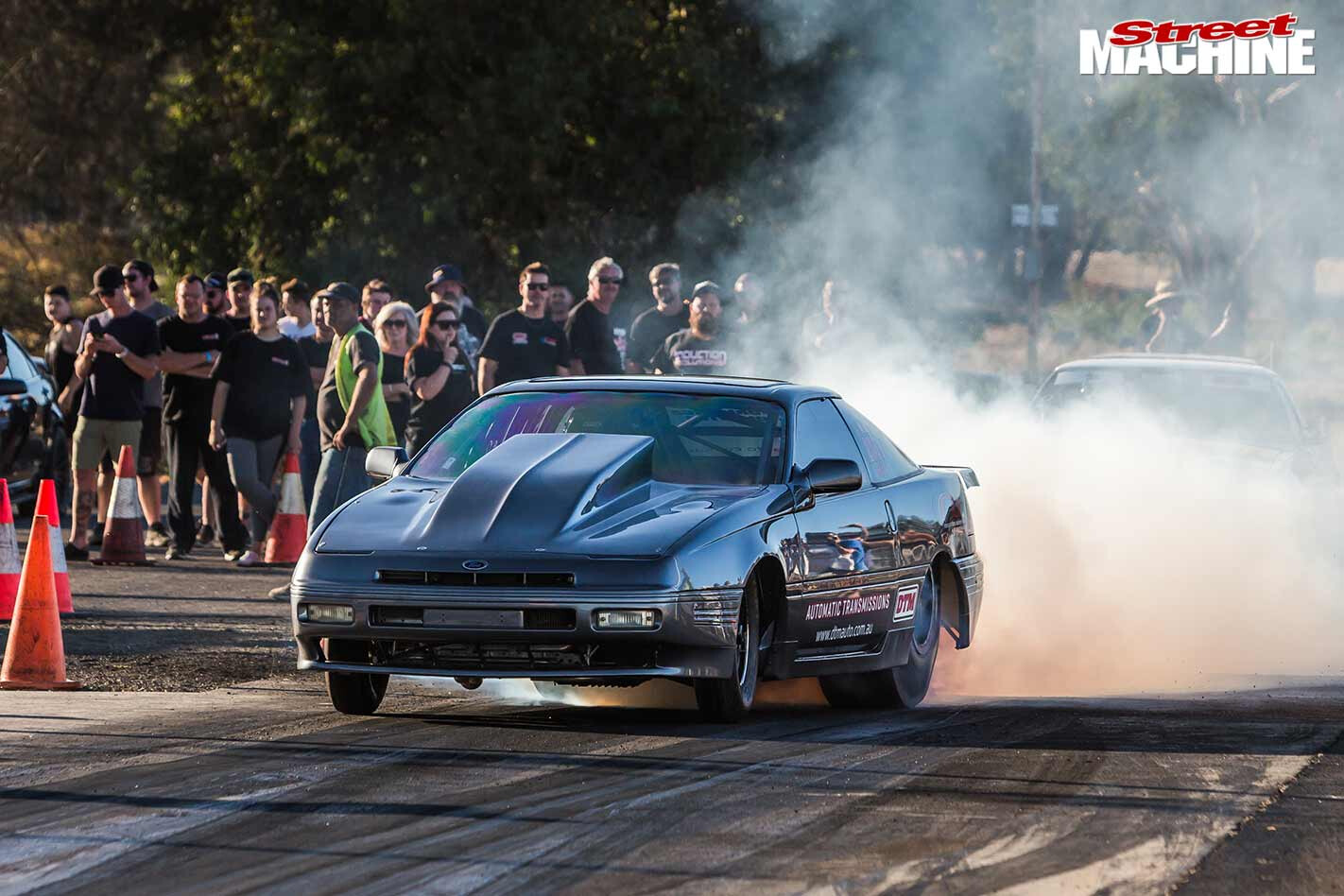 This was Craig Marshman’s second crack at Holden Nats in his DTM Transmissions Ford Probe. The 403ci alloy-block LS is topped off with a Harrop 2650 blower, and running E85 it cranks out 710rwhp. Craig went seriously close to reaching his goal of a 7sec pass, running a PB of 8.06@169mph Trent Baseden’s super-clean LX Torana is the perfect all-rounder for street, drags and burnouts. The L98 is topped off with a Holley high-rise manifold with EFI Hardware throttlebodies. Making 450hp at the rears, the LX has a PB of 10.33@136mph to its credit Troy Leishman’s VZ SSZ is a true street warrior, driven to and from the track for the day’s racing. Motivation is an LS1 stroked out to 383ci and, with a Harrop 1900 blower pushing 9psi, it makes 590rwhp on 98 pump fuel. Troy made it all the way to the Boosted LS final, where he broke out but ran a PB of 10.59@134mph While he may be best known for his 200mph, Windsor-powered XW Fairmont, Frank Marchese from Dandy Engines doesn’t discriminate, running support for a number of customers and mates throughout the day In a winners list dominated by Toranas, Ben Threlfall beat a packed, diverse field in the Outlaw Class to take home the win with his UC Torana. Powered by a monster carby-fed 438ci LS2 pumping out north of 730hp, Ben’s UC stormed home to win the class over Justin Robinson’s LH Torry 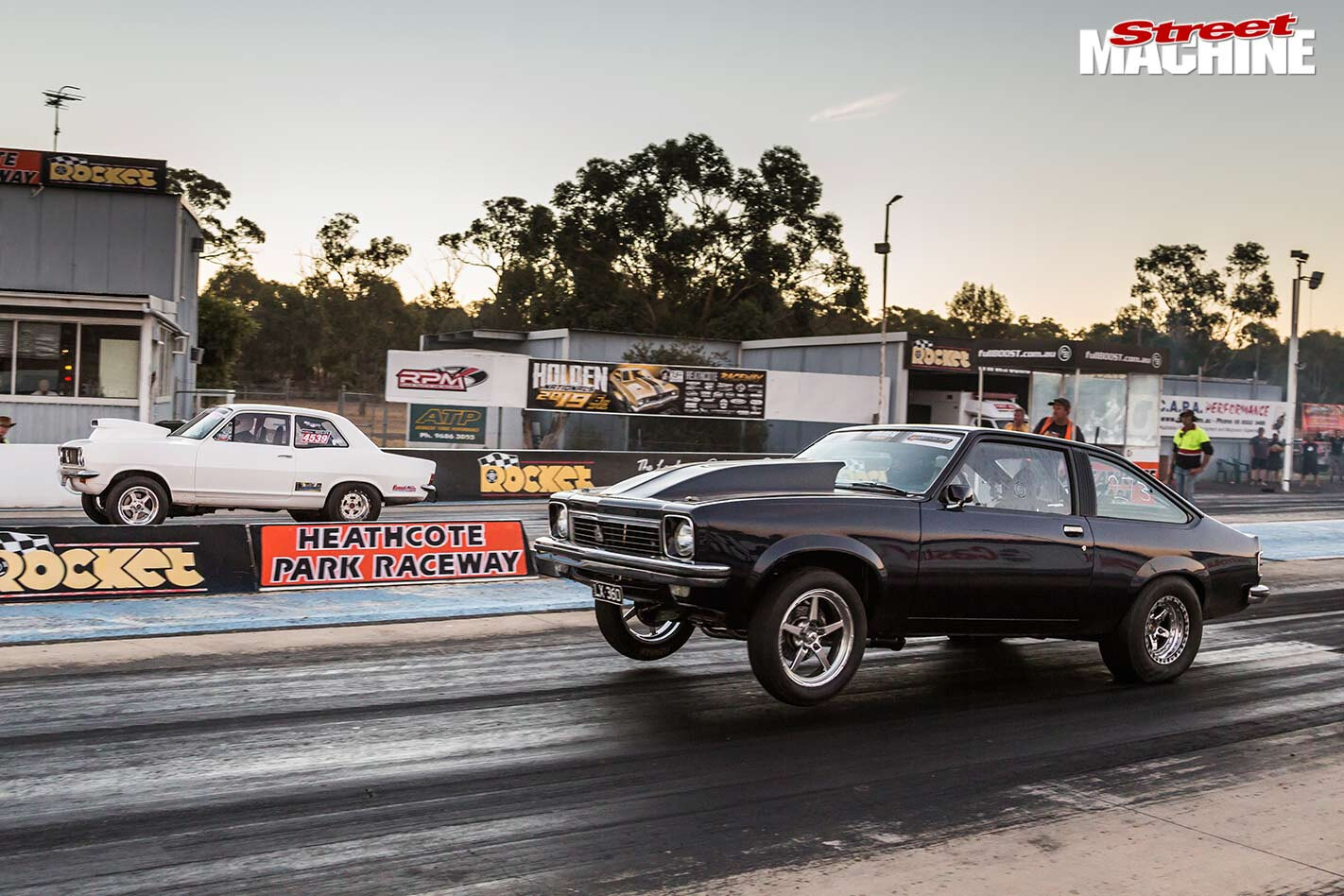 After a couple of years of finishing near the top of the order, Dom D’Agostino broke through this year to win the Holden Naturally Aspirated class. The 383ci stroked Holden 5.0L in his LX Torana throws out nearly 700hp of carby-fed fury, and Dom dialled in a 9.80 to take the win over Caine Reed’s HB Torana Cameron Jones was the king of the force-fed LS engines, taking home the Boosted LS class win in his HQ ute. The 404ci LQ9 has a 106mm Precision turbo, making 1320hp at the hubs. The Holden Nationals was just the second outing for the car, with a best pass of 8.22@173mph Holden Nats wasn’t a pushrod-dominated affair, with plenty of RB-powered VLs flying the flag for the turbo six guys. A delicious example of that was Steven Janev’s VL SL, running a SOHC RB30 that’s had the full JPC treatment. That meant over 1100hp of screaming RB fury, and a best run of 8.84@168mph for the day’s racing The staging lanes weren’t just a minefield of blown LS cars; Brendan Cherry represented the big-block Chev boys in his VL Calais. He encountered a few dramas during testing with the 1400hp, twin-turbo 572ci Merlin donk, before going out and running two 8.3sec passes, at 159mph and 173mph respectively Paul Surkitt took home the cherries in the Boosted Holden class, his LJ Torana running a best of 10.12@137mph. The magic mill is a Flowcraft Engines 355ci Holden, fed with a 150hp shot of happy gas to make 450rwhp. While he previously raced at Holden Nats in 2017, 2019 was Paul’s first crack with the new mill and it worked wonders 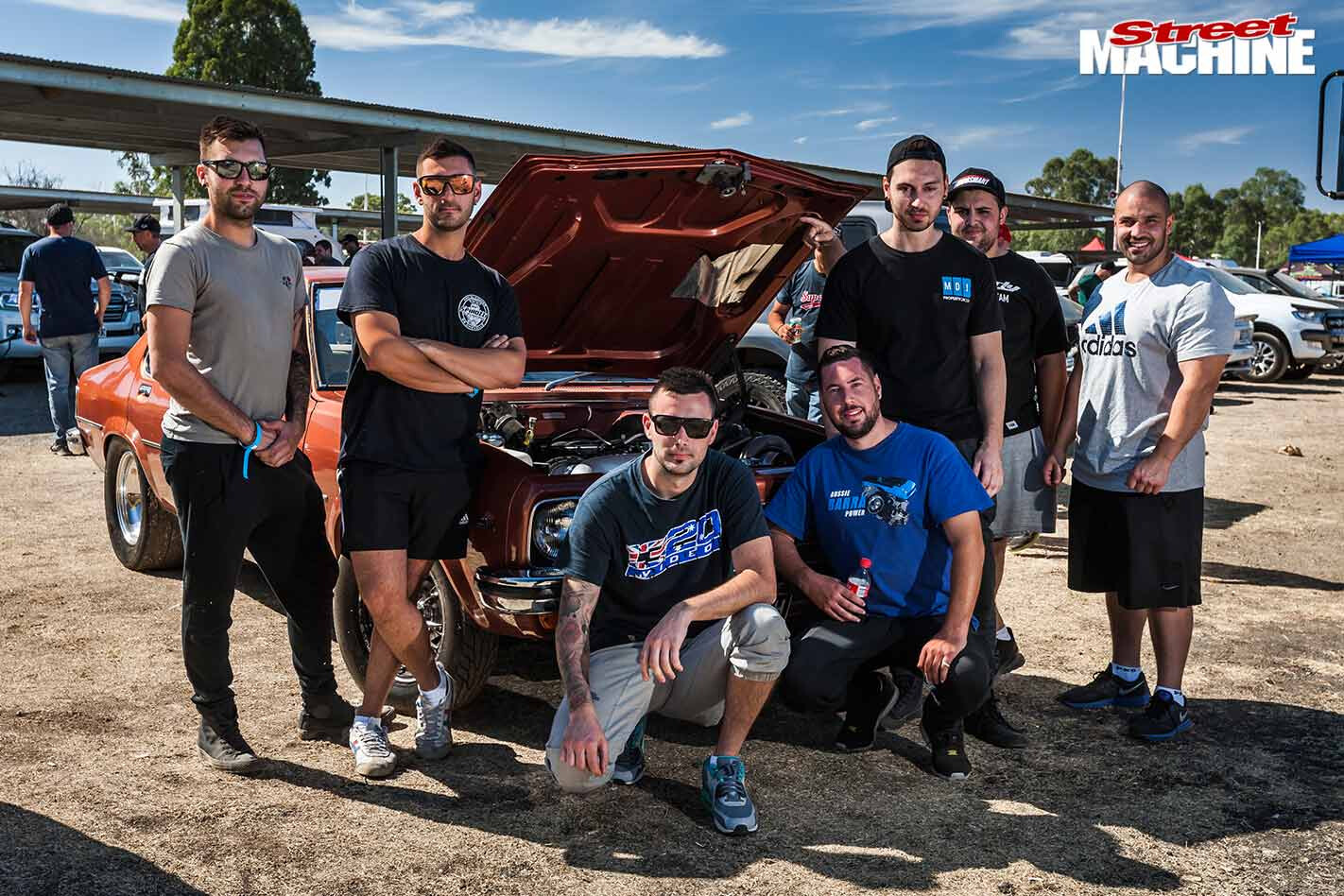 Lee Nardella’s Torana was one of the more budget-friendly examples hitting the strip. His combo consisted of a stock-bottom-end LS1, re-tuned factory LS1 ECU and flipped LS1 manifolds. With some basic head work, it also sports a GT42 Chinese turbo, cranking out 640rwhp. He made it all the way through to the semi-finals of the Boosted LS class, running a best of 9.6@147mph 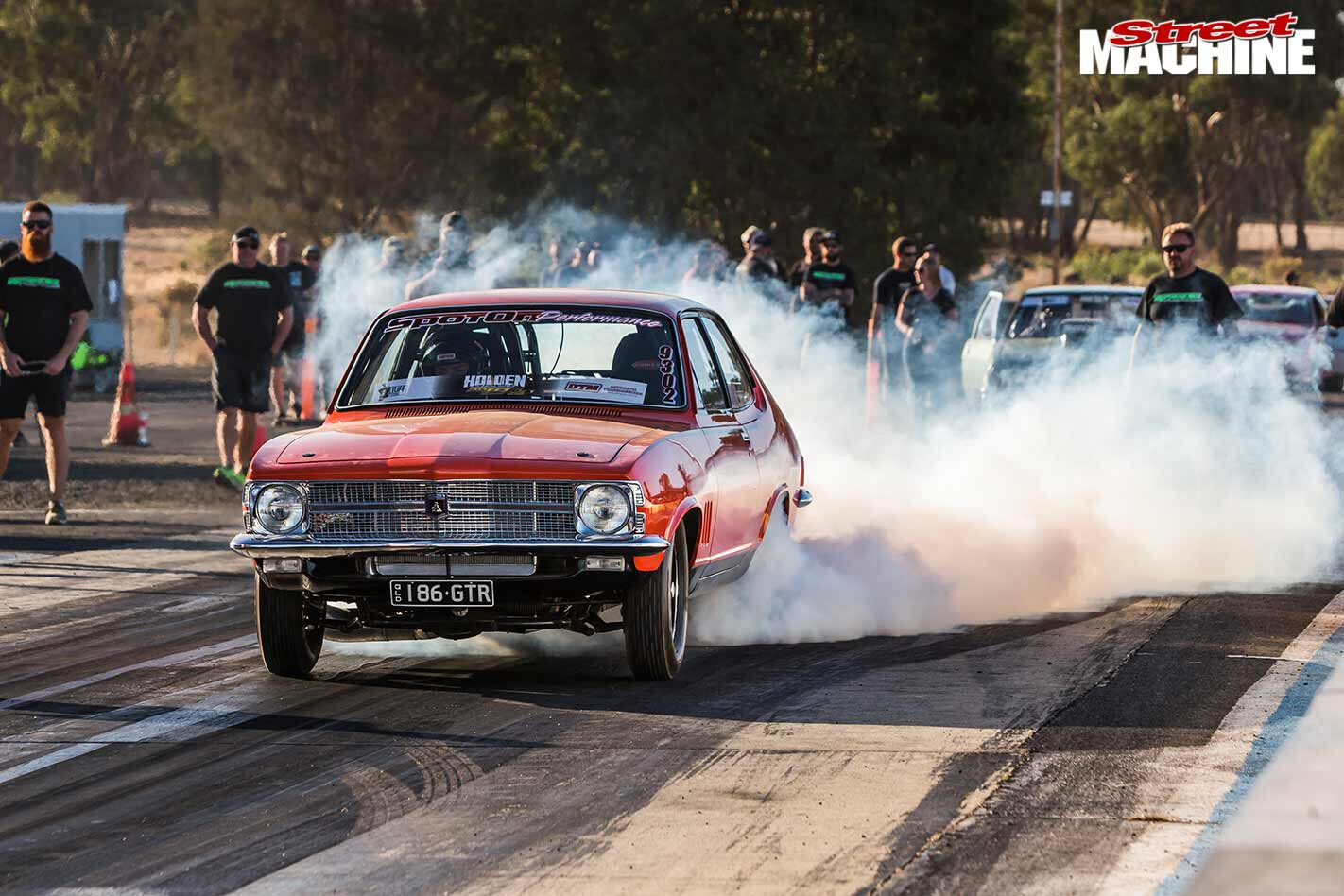 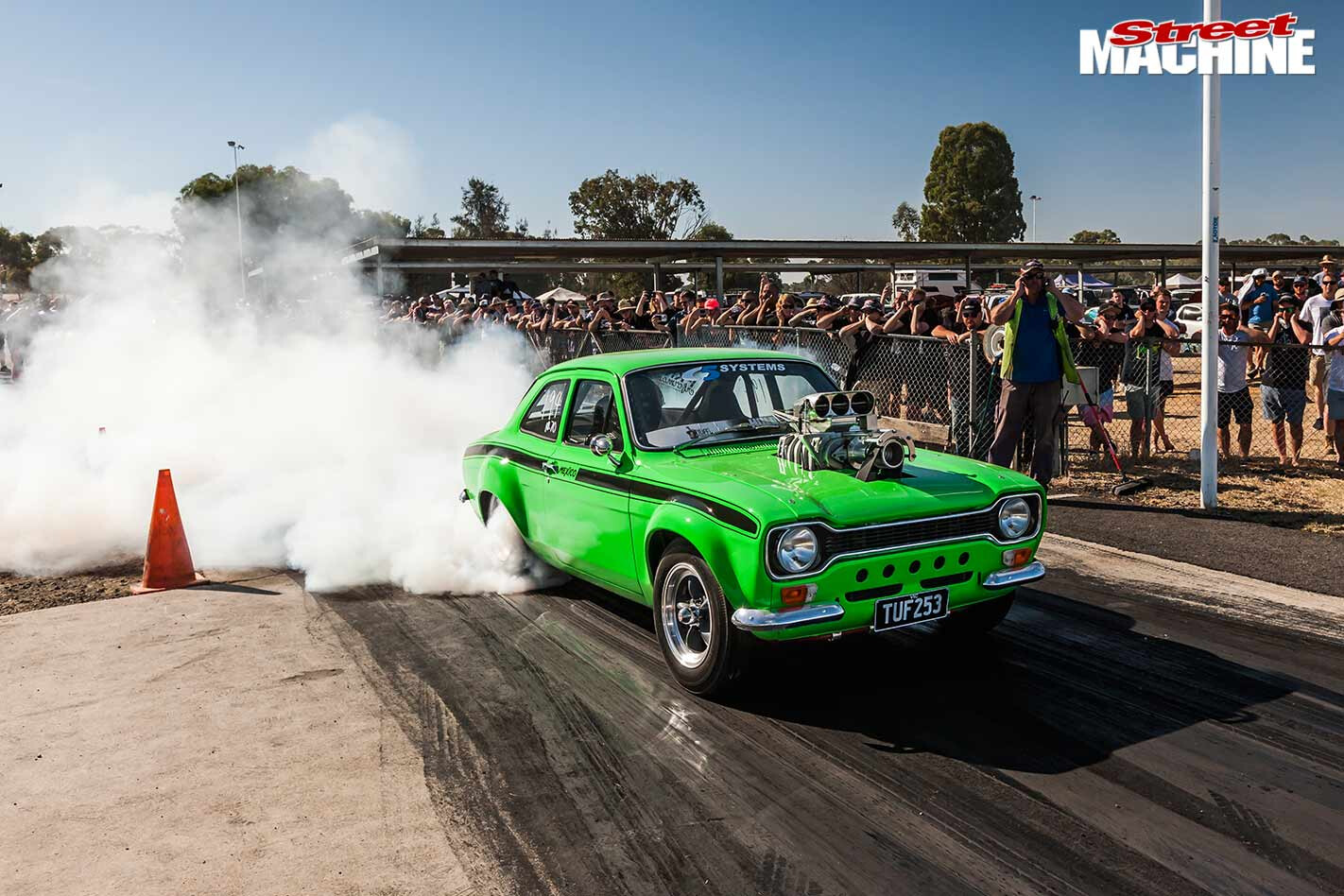 Shannon Heraud’s tough little Mk1 Escort is best known for killing tyres on the burnout pad, but he proved at the Holden Nationals that his little green monster really is a multi-purpose shredder. The thumping blown 253 beat out a soundtrack that had heads turning while Shannon put down a number of 10sec passes Luke Foley was in fine form, consistently running low 8s to put down the quickest time of the weekend and the quickest 275 radial pass for the second year in a row. Unfortunately he broke out of his dial-in, which ended his day prematurely 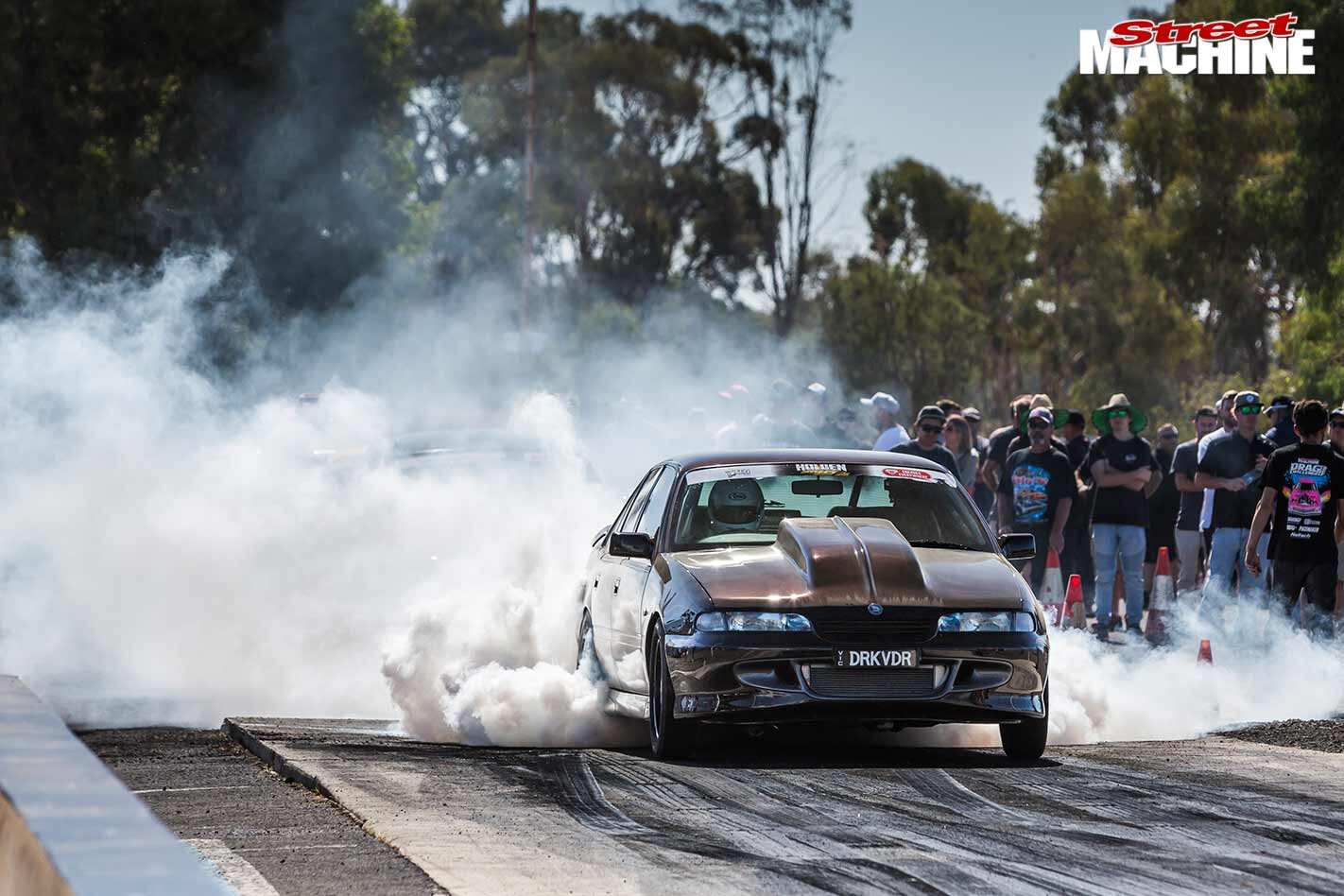 Jason Giortsios’s VS Senator is missing its iron lion heart, replaced with a built L98 monster. The mill has been given a birthday with a forged bottom end, ported heads, and an LSA blower. Running 14psi, it makes over 690hp, with a PB of 9.90@145mph recorded during Friday-night testing