1100rwhp is just the beginning for this VH Commodore

This article on Chris's Holden VH Commodore was originally published in issue no.5 of Street Machine's LSX Tuner magazine

You need friends when you build a car. Their support can help out in all sorts of ways, from spinning spanners to hooking you up with parts you didn’t know you needed. 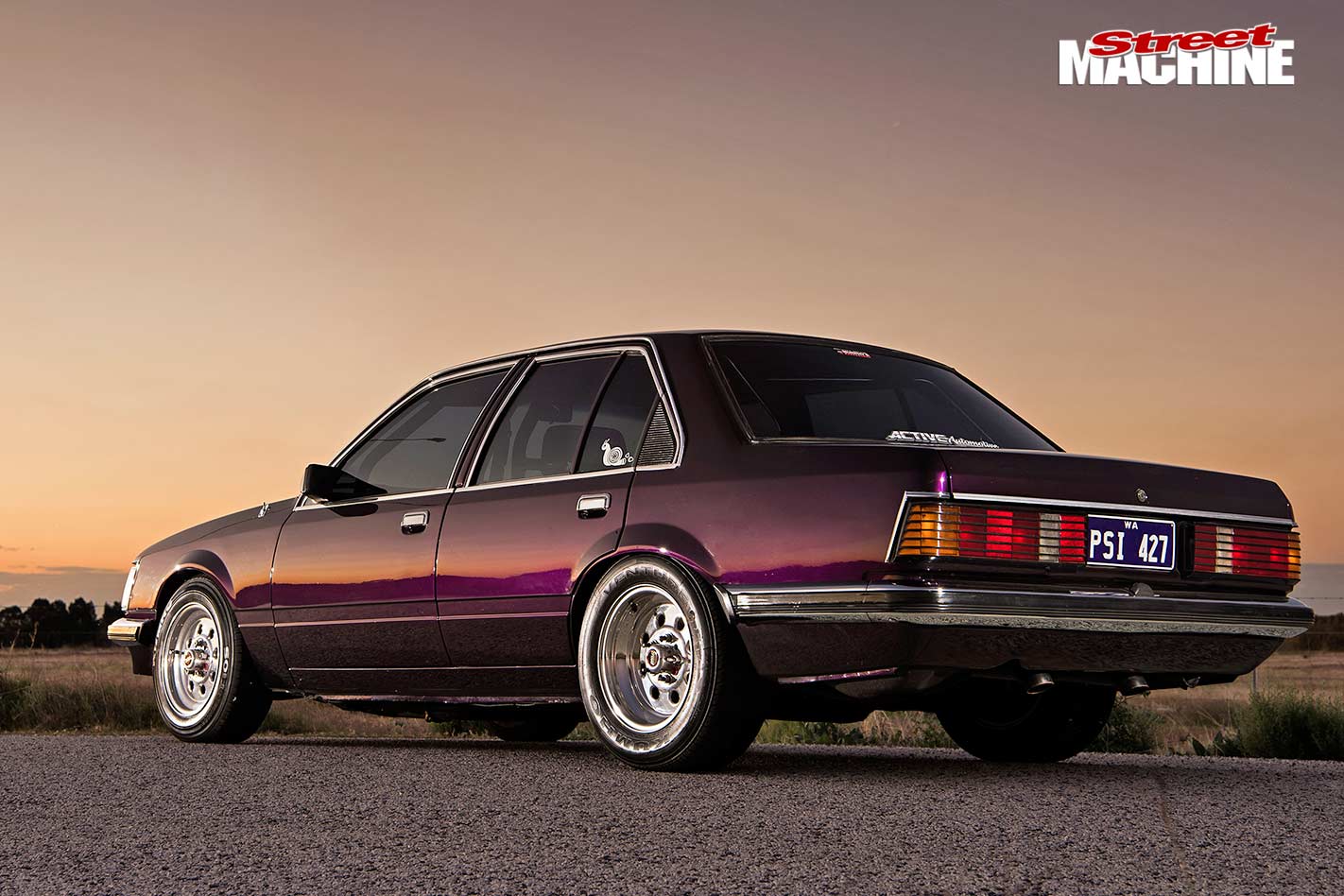 And it was a friend selling an engine that led Chris Murphy to build this twin-turbo 427ci VH Commodore that makes over 1100hp at the treads!

“A mate had Eddy Tassone build a twin-turbo 455-cube LS for his VY SS, which previously had a 600hp naturally aspirated LS7, and he sold me the aspirated motor,” says Chris, who hails from Jane Brook, WA. “I actually had the motor before I had a car to put it in. I’d always wanted a car with at least 600hp so I went looking for Toranas, but most of them were either too expensive, or required too much work to get up to speed.” 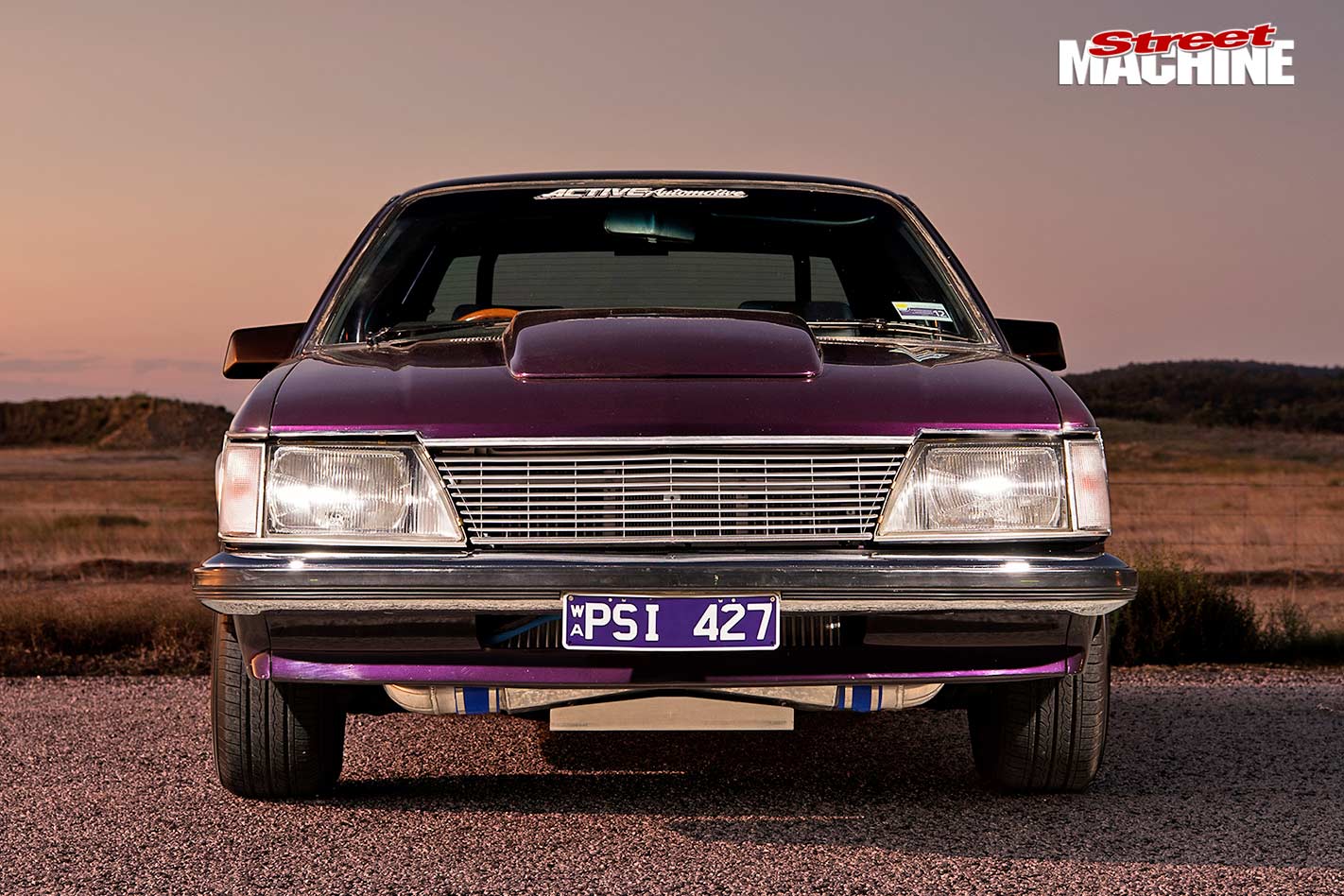 The name Eddy Tassone should perk the ears of horsepower-addicted street machiners, with the two-time Summernats Horsepower Hero a legend across dyno, drags and even high-speed standing-kilometre racing. He also runs Active Automotive in WA, specialising these days in mega-horsepower LS engines, so he was the perfect guy to have in Chris’s corner.

While Chris pondered what car to stuff his big-inch aspirated LS into, a chance passenger lap in a blown Commodore changed everything. “I went for a drive around Barbagallo in a twin-turbo VY SS and it was all over,” Chris remembers. “I never finished the N/A build and sold it off. I talked to Eddy and he sold me the GT42 Garrett turbos off his red VZ ute, and that was the beginning of the turbo build.” 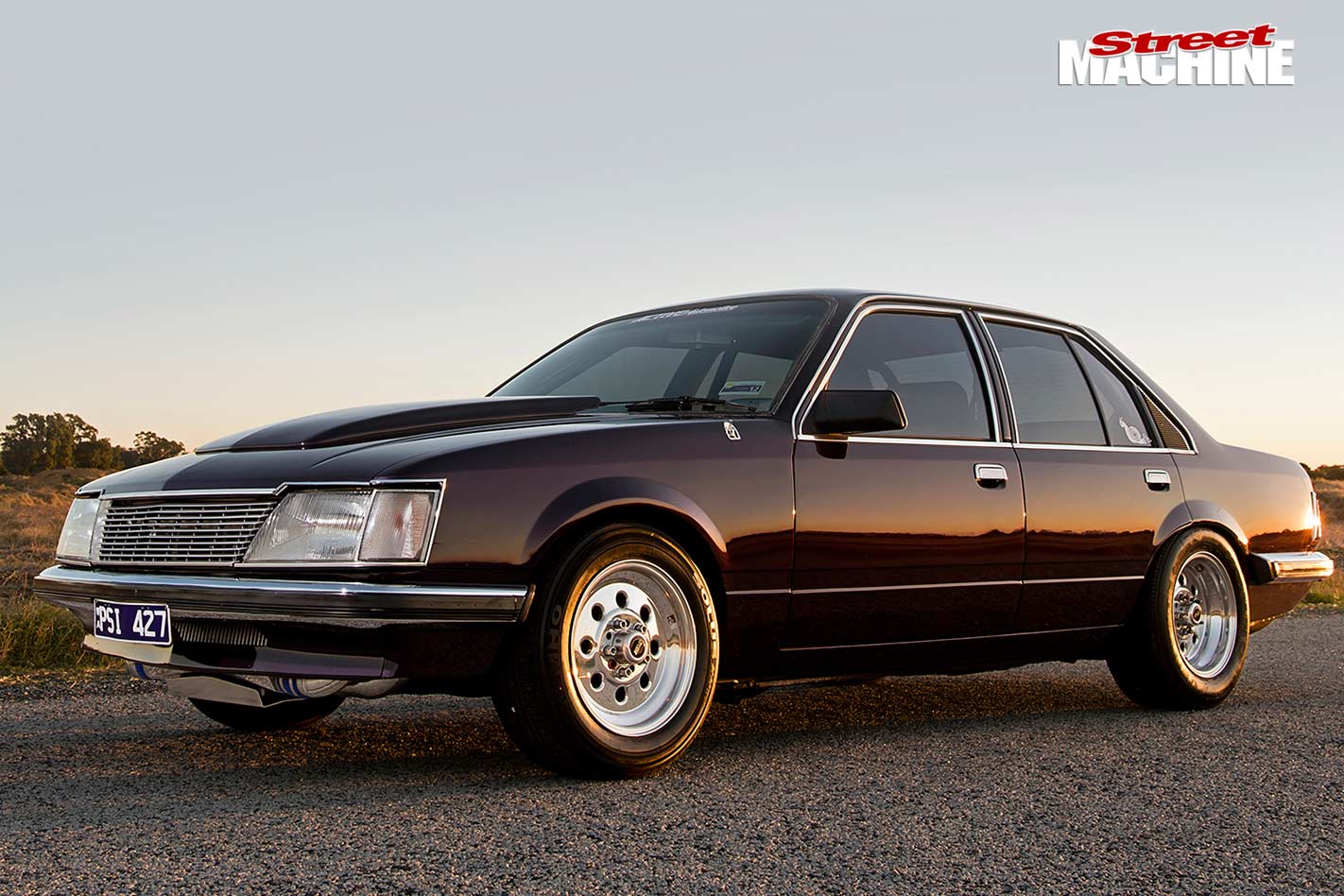 When Chris bought the VH it was already painted, but the injected 304ci Holden V8 wouldn’t hold a candle to his N/A 427ci plans, let alone what powers the car now. “I went on a local cruise organised through Facebook and when I turned up a few people looked at the car. Once I popped the bonnet there was a crowd 10-deep trying to see what was in there,” he laughs 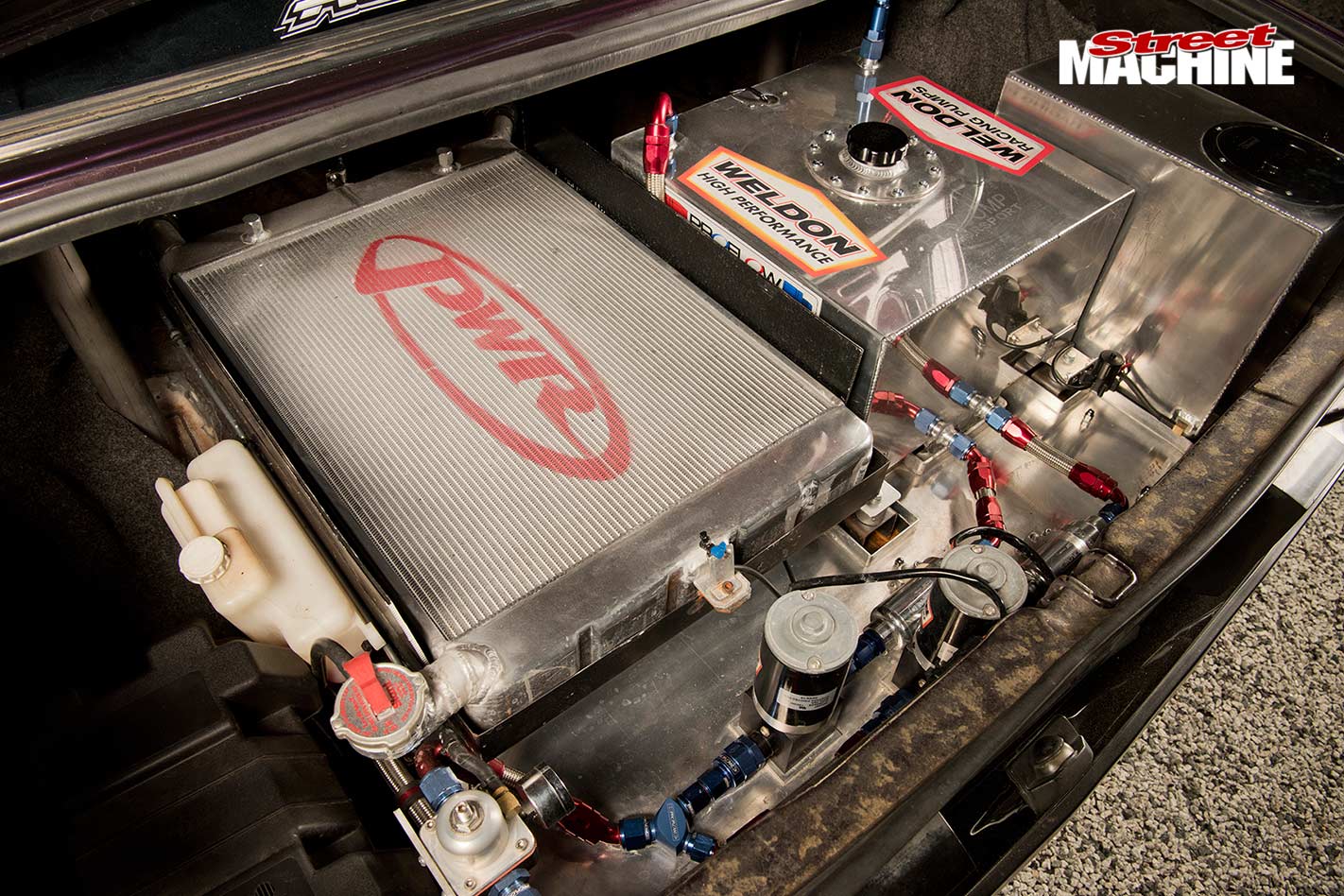 “I had a set of Warhawk heads for the N/A build, but Eddy said they weren’t going to cut it with the power a turbo motor would make,” Chris says.

The rest of the package had to step up in spec to suit, too. For cooling, a Meziere electric water pump and boot-mounted PWR radiator do their best to stop the monster boiling, while the factory LS7-spec ignition remains to spark the fire, and the Melling oil pump keeps the lifeblood pumping. 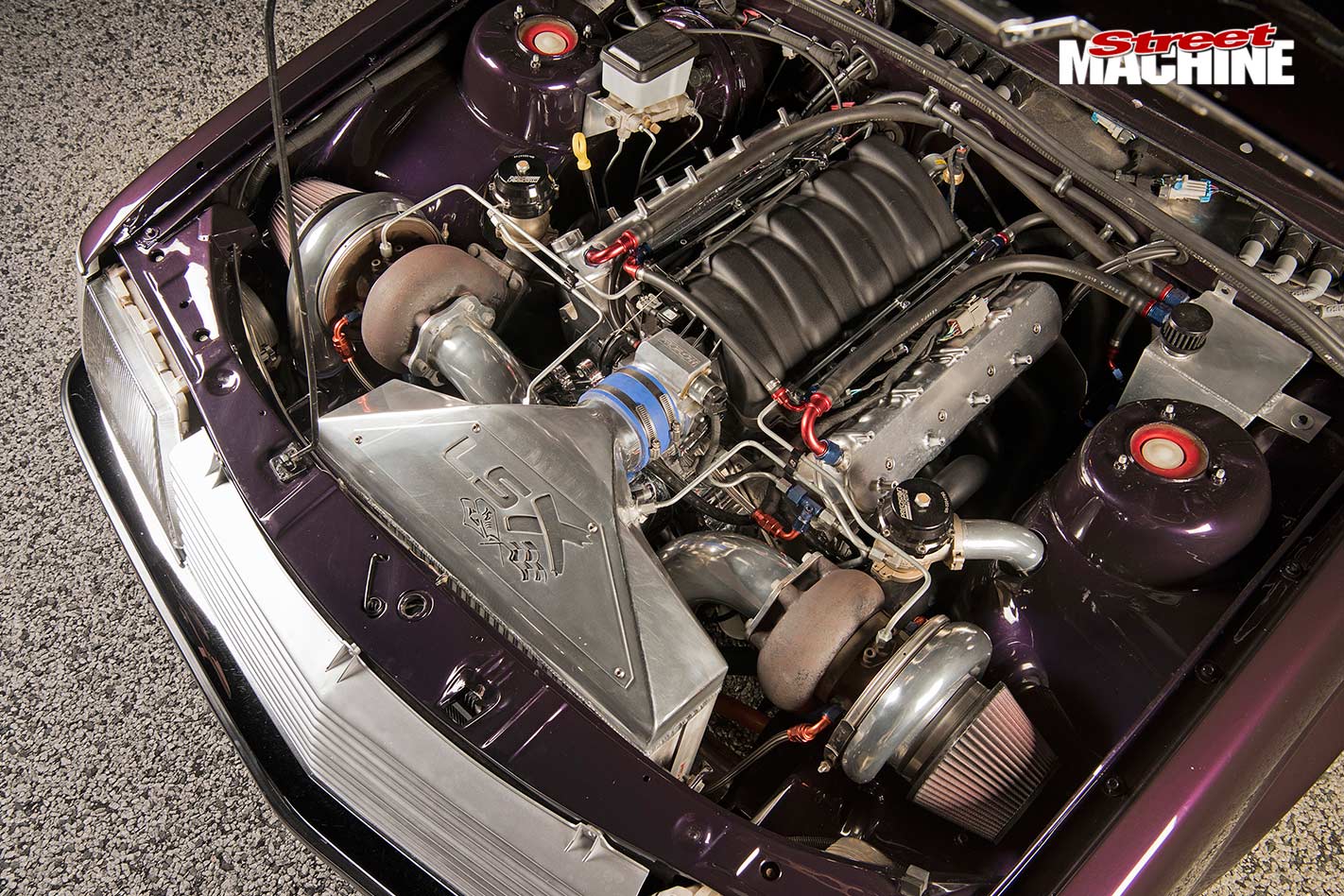 Chris says he was originally going to go with the castiron LSX block, but the new-style short-deck RHS LS7 aluminium block had just been released, so he bought the first one in WA on Eddy Tassone’s recommendation that it was the strongest and lightest option on the market

By this stage Chris had found himself a suitable car to sling this mammoth donk into, purchasing a neat VH Commodore from Kwinana. “It already had the good purple paint and the shell was good and clean, but the standard green velour interior was rubbish, the engine bay needed work and the wiring was bodgy. But I like the VH as it’s the last steel-bumpered Commodore and the SL/E option had a few creature comforts.”

A pair of custom 17/8-inch headers mount the two Garrett GT42R turbos, with a twin fourinch system ridding waste gas, while Scott at Torque Fabrication built the front-mount intercooler using two modified PWR cores with a custom top tank that merges them together. “I’m a bit OCD with symmetry so I had Andy Butler of Andy’s Exhaust build the custom headers so the turbos were ‘mirrored’, while the wastegates are vented to the atmosphere, and that sounds tough,” Chris says. “Once everything was dummy-fitted and clearanced, I then had everything HPC coated.” 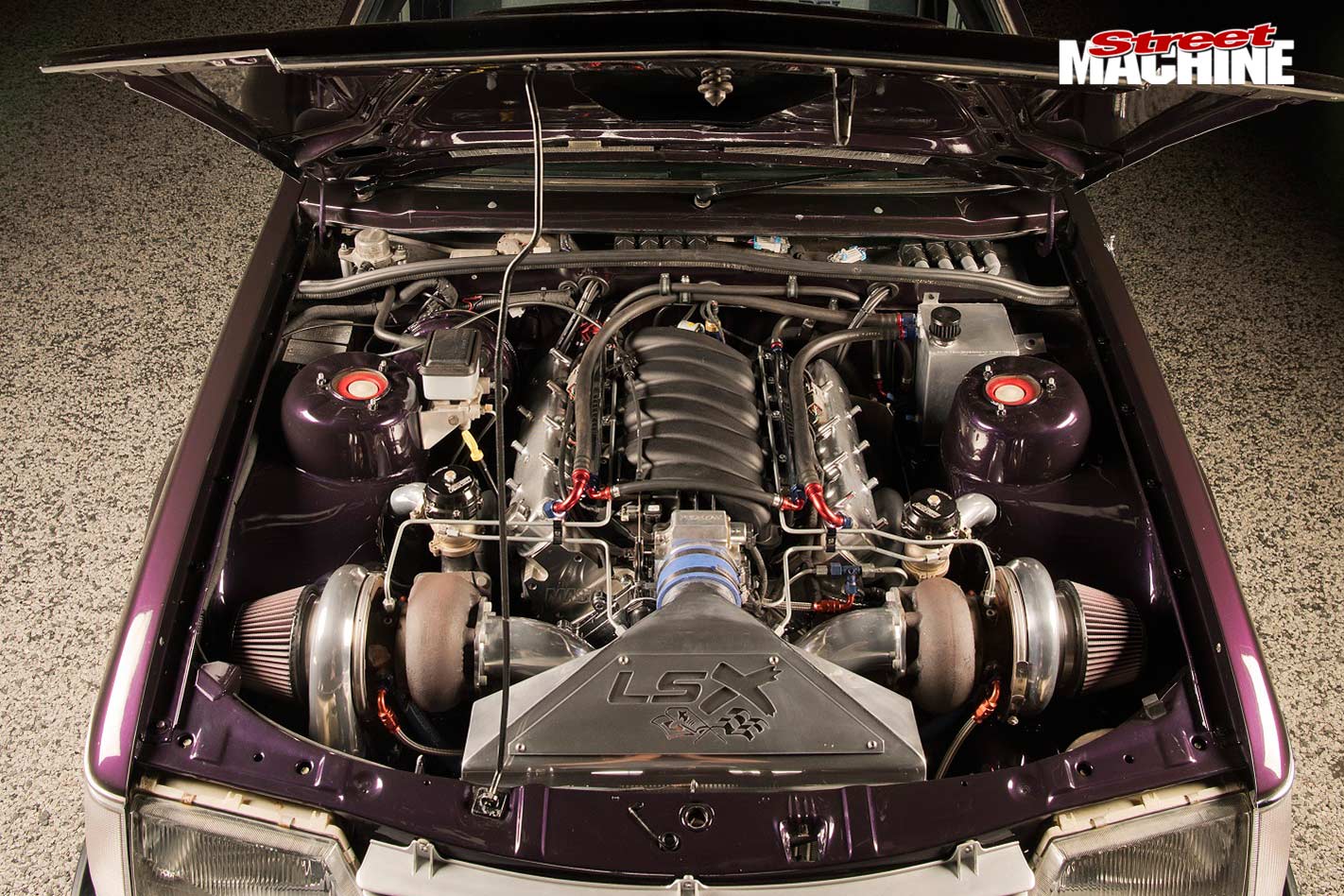 With the radiator in the boot, Chris had Scott at Torque Fabrication whip up some lines to run coolant the length of the car, along with the solid engine plates that mount the 427ci monster between the chassis rails

For fuel, E85 is hosed from the boot-mounted cell into the big little block via ID2000 Bosch injectors and twin Weldon D2025 pumps, but there is a drawback to this set-up. “Lack of E85 around Perth hurts the car’s streetability,” Chris explains. “I have a 40-litre cell, and as you use more E85 than pump fuel to make this power, it doesn’t give great range, especially when the nearest E85 servo is about 30km away!”

The first time out on the dyno saw the fresh engine zing almost instantly against the 7000rpm limiter, throwing out 1101rwhp and 1830Nm. The engine is now run in and Eddy is planning on taking the car back and running it to 7500rpm and 25psi, where the boys think it should make over 1300rwhp! 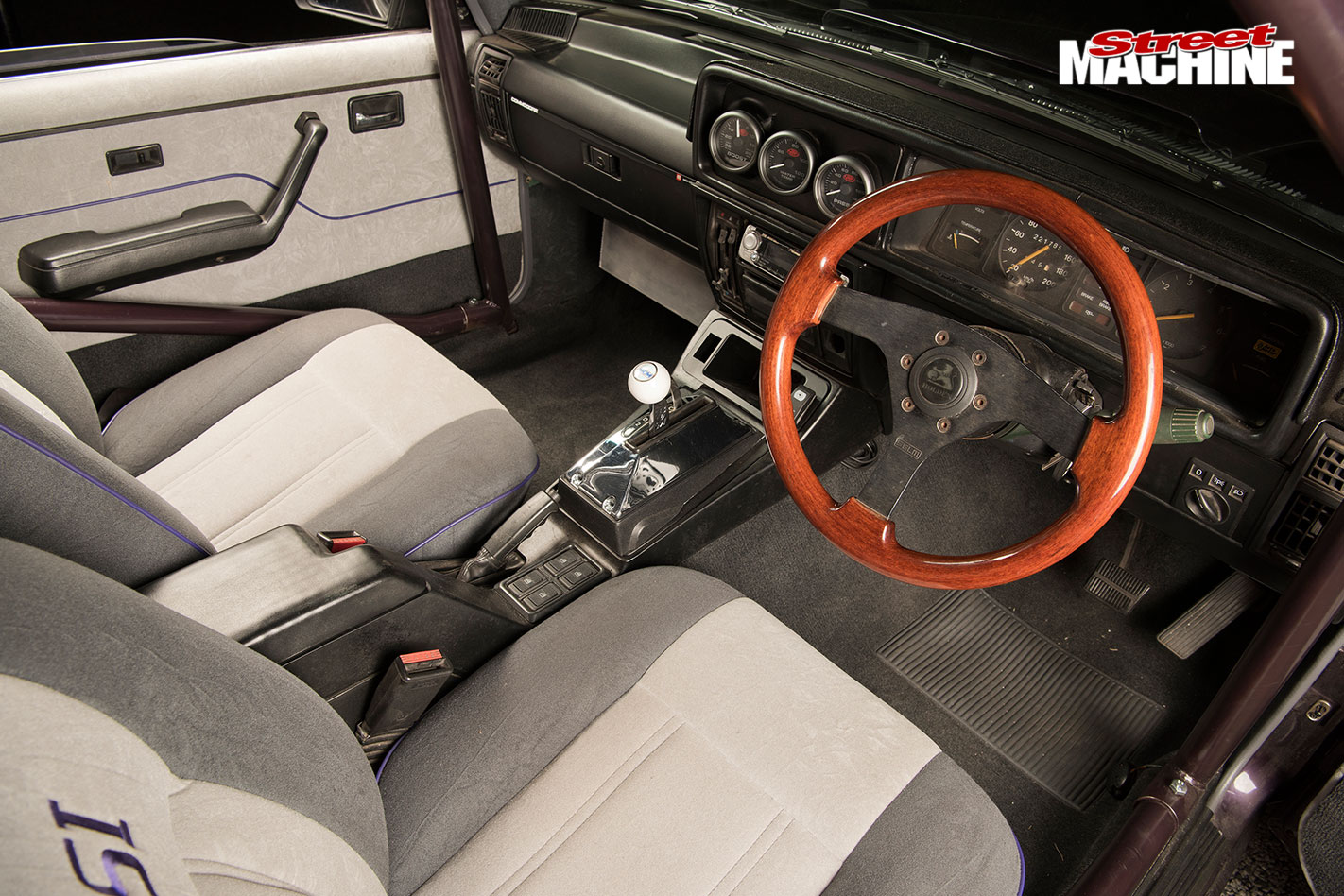 As he didn’t have many pleasant things to say about the dark green velour interior the VH came with, Chris had TC Trimming redo the cabin in plush SL/E style, upgrading the gauges to SAAS units and the shifter to a B&M Pro Ratchet. The ’cage is a weld-in six-point job, as Chris will eventually run the car at Kwinana

By doubling his N/A power goals, Chris knew his original plan for a simple TH400 and LSD drivetrain were out the window. A custom 10-inch billet torque converter from Gonzo at Allfast Torque Converters sits in front of a reverse-pattern TH400 with transbrake and all the good heavy-duty innards, while a Strange nine-inch with full spool and 3.7 final drive lives out the back.

With the starter motor mounted on the left side of the engine, a manual steering rack was required to fit around the sump and pipes. The braking system consists of VT Commodore discs, rotors and master cylinder up front, with Wilwood discs out back. Chris had to fit a vacuum pump off a V6 VE Commodore to keep air pressure up to the stoppers. 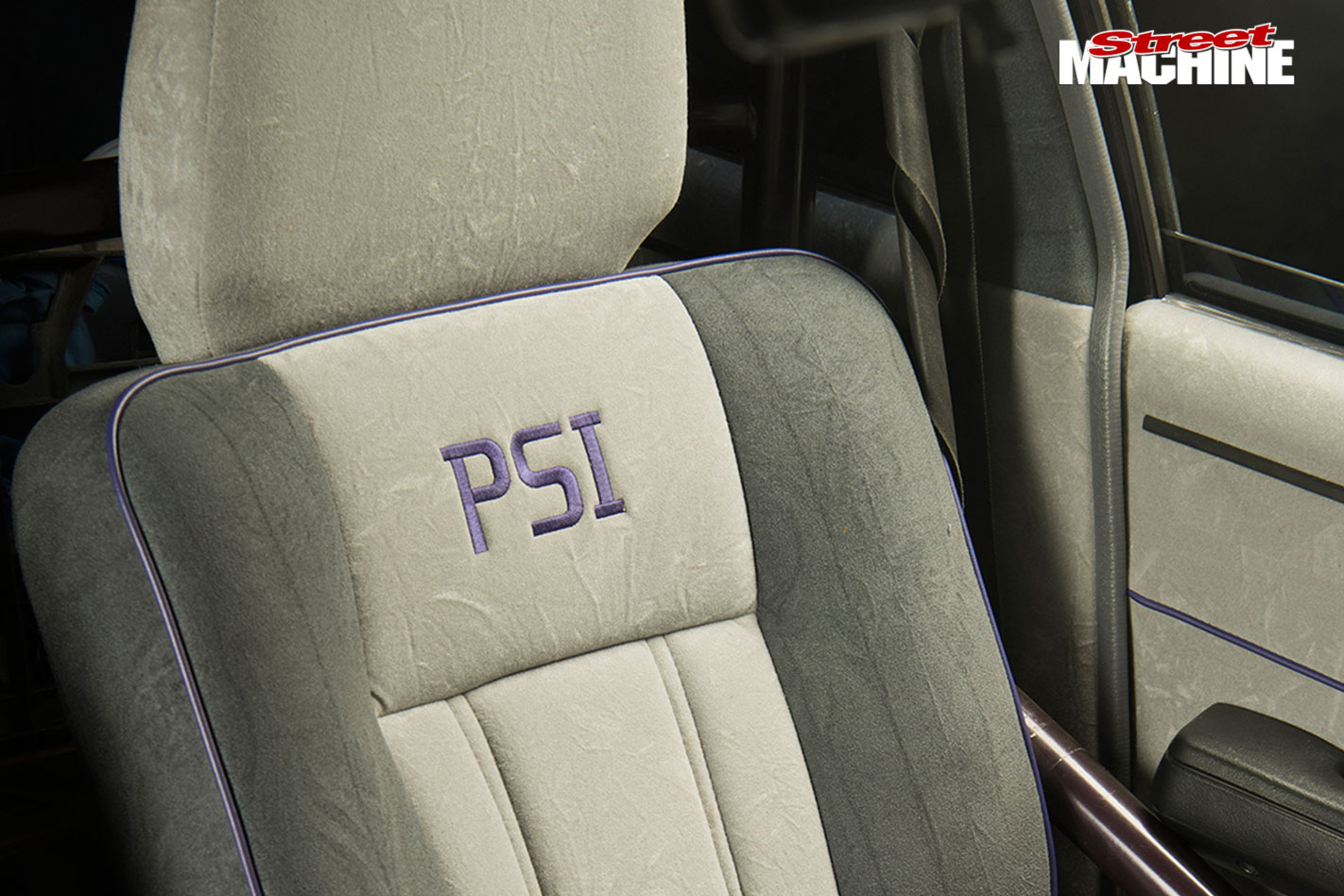 Handling 1100rwhp is a huge job for any early Commodore shell, so the bushes were upgraded to tough Nolathane units and the rear trailing arms boxed to resist the twist.

Chris reckons it drives nicely, though he knows that his change of engine combo has left the chassis needing more work to handle the newfound power. “In hindsight, I should have tubbed it,” he sighs. “I have tube trailing arms on order and I’m going to have to move the spring mounting points in to clear a bigger tyre, as I’ve played with a heap of wheel offsets and the 245 is the biggest we can fit, which isn’t enough. I never really expected the car to go this far, but one ride in a turbo LS car and it gave me the bug, bad.”

It looks like absolute power has corrupted this West Aussie absolutely!