WHEN it comes to legends of the Aussie burnout scene, they don’t get much bigger than Gary Myers. While his iconic GM176 1966 Mustang coupe (now known as S1CKO and campaigned by son Jake) wasn’t the flashest ride around when Gary first got his hands on it, he built his legend in that car through seven wins at the Summernats burnout competition, helping to move the scene towards its current status as a professional sport. 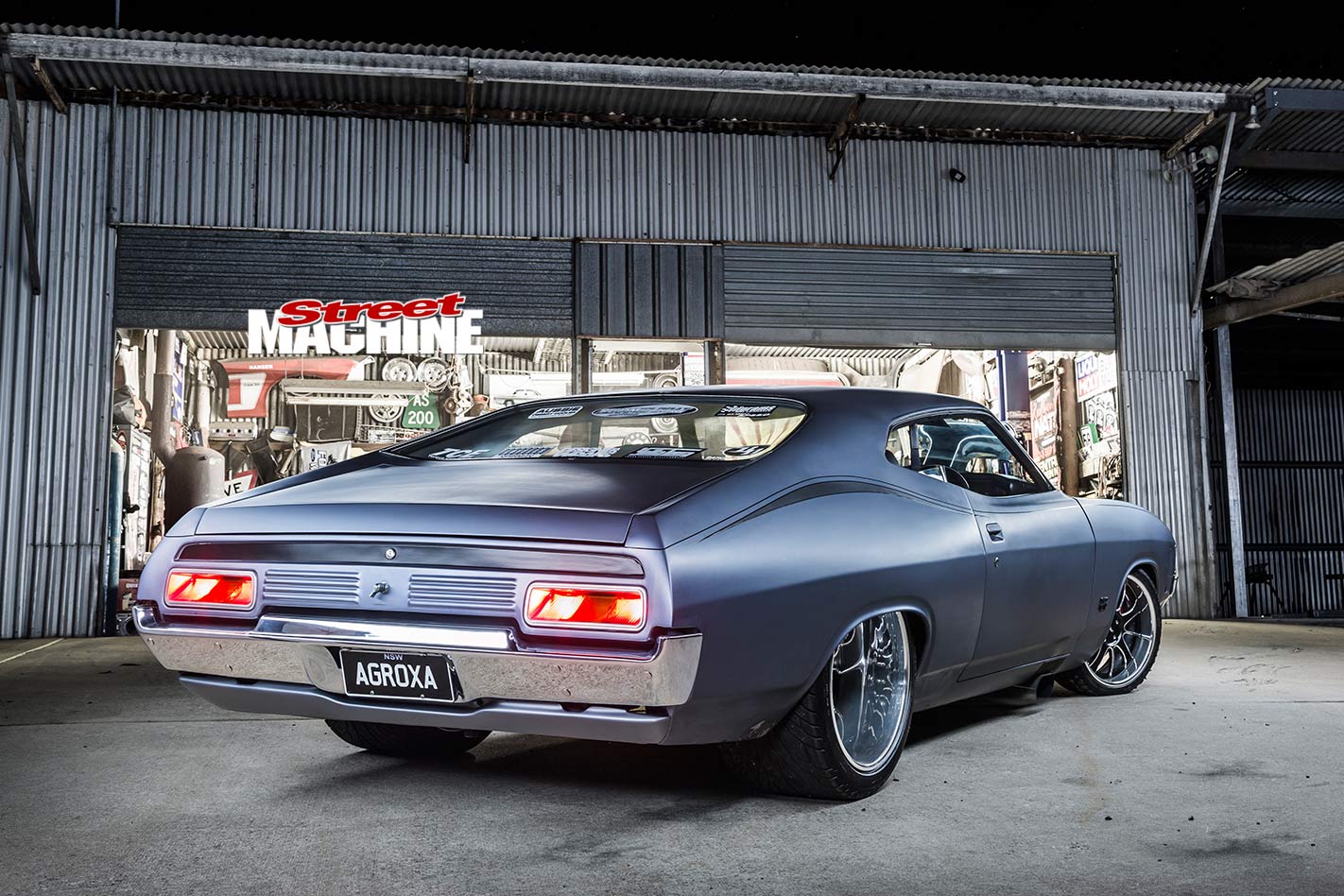 Punters wanting to experience what a skid is like from inside AGROXA can get a virtual steer via the Torque Burnout app on their phone (a computer game with real-life burnout cars and tracks.) AGROXA will be added to its line-up from the next app update, which already includes the Myers’s legendary GM176

If that wasn’t enough, he and wife Deby also run the Gazzanats shows and have been responsible for plenty of other builds, all wearing the iconic Blue Oval. They include the twin-supercharged, Hemi-powered, chopped-top Silver Bullet Mustang; 2INSANE, a 2005 GT Mustang land-speed record car; and XACUTER, a two-tone XA GT coupe burnout beast, which originally featured a naturally aspirated engine when it debuted in 2007. 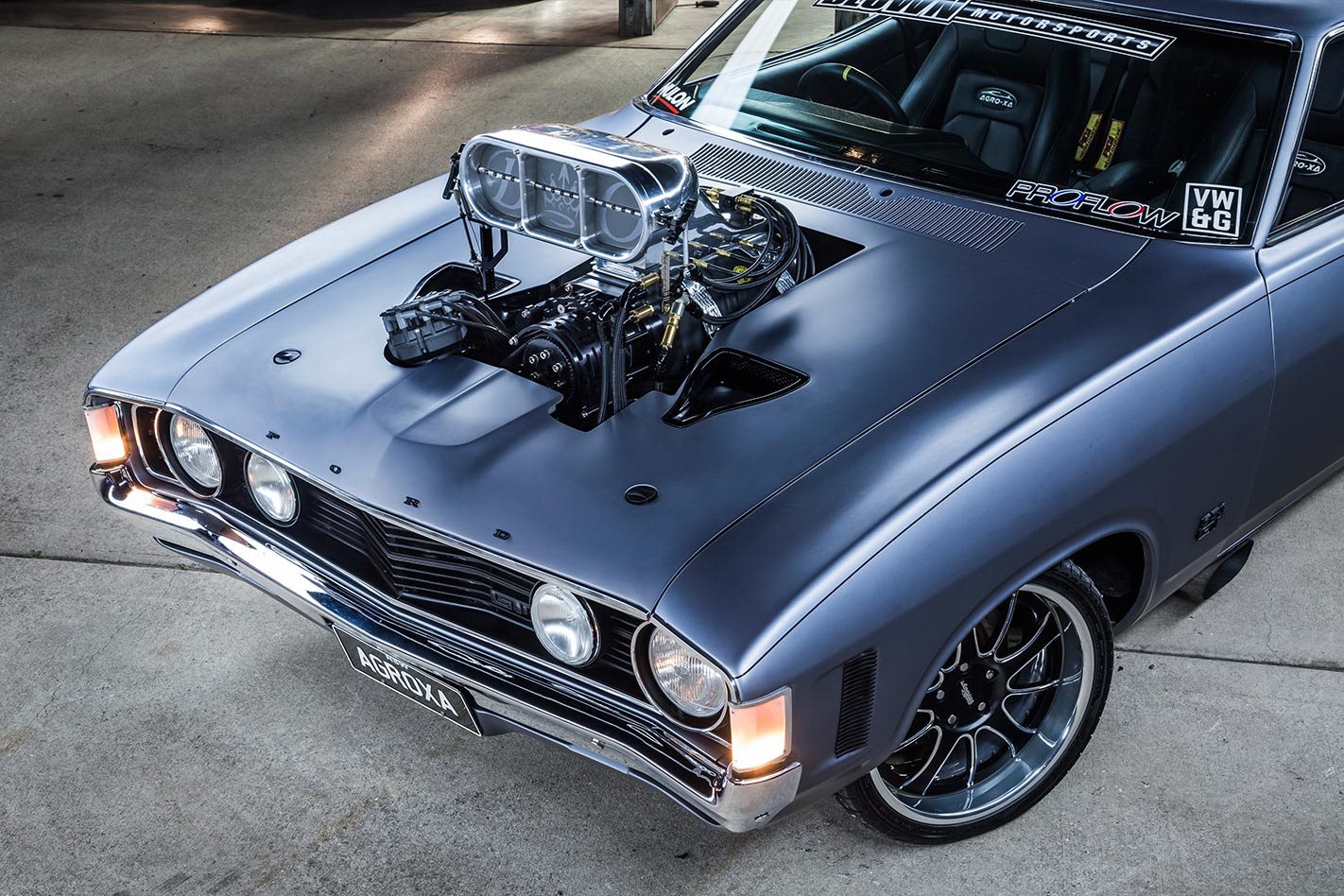 That genuine two-door GT Falcon got a refresh in 2014 for MotorEx, with a flash orange-over-white vinyl wrap to replace the House Of Kolor purple/silver combo, rebranding the car as AGROXA. But that was just the start of the coupe’s big birthday.

“I didn’t know what direction I was going in at the start,” Gary laughs. “I sold the N/A engine and I thought I could knock over the freshen-up in a short period of time, but then MotorEx Melbourne in 2014 came up and we decided to get it there. I had the blown engine dummied up for the show, as we had a lot of expensive engine parts to order before it was finished. 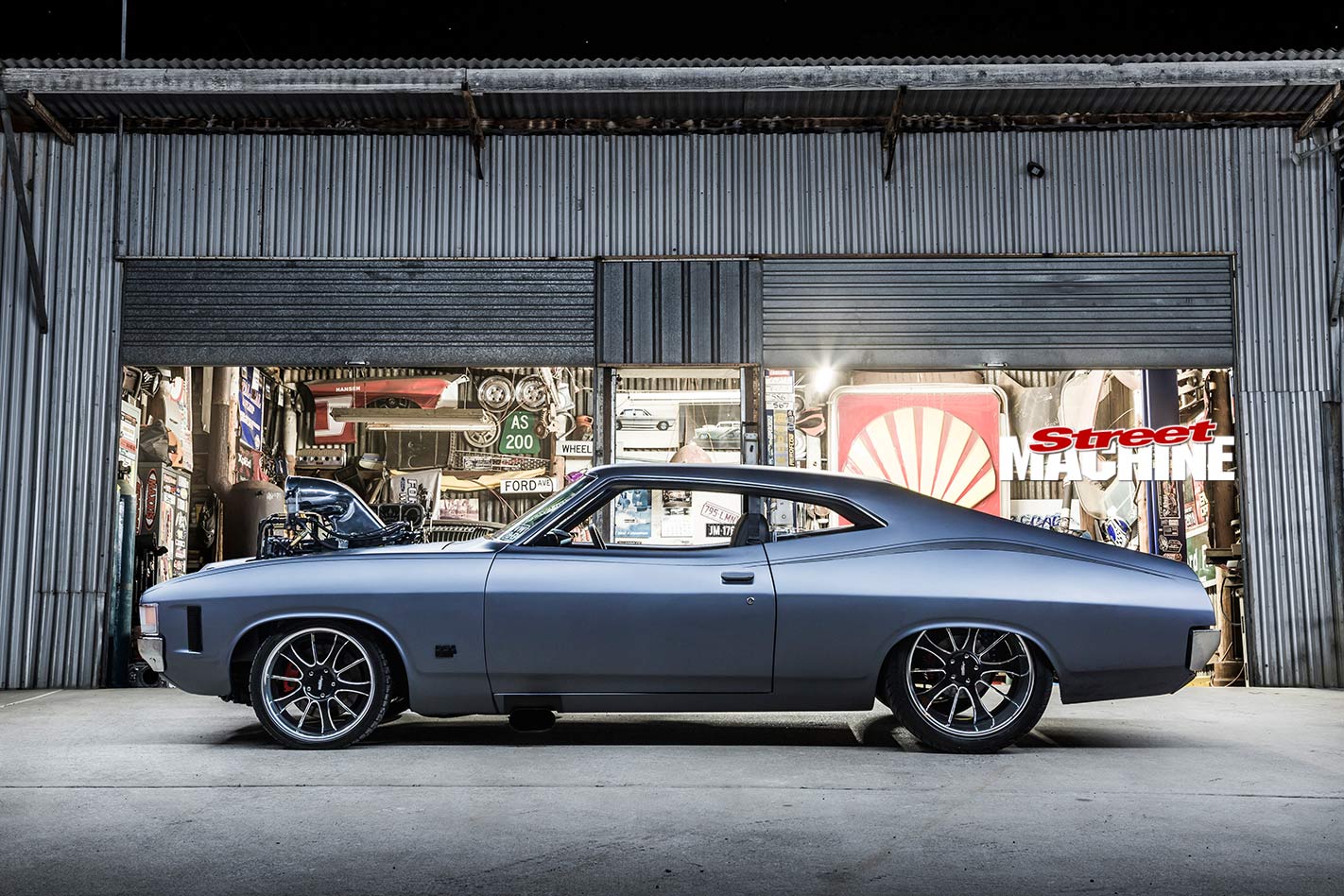 Batkin & Damme Smash Repairs in Wagga had been responsible for XACUTER’s original two-tone paint (now covered by wrap), and also the smooth satin-black job on the engine bay. Gary’s good mate Jarrod Wood was the man responsible for smoothing those big panels and getting them perfectly aligned

“After MotorEx the car came home and sat in the shed for two years, as it was a long process purchasing parts for the engine and doing lots of fabrication, changing the fuel system from carburettor-spec to suit the mechanical injection, and more. There wasn’t a rush to finish the XA so, in the end, it was three years from pulling the N/A engine out to finishing it in blown-spec. It was a painstaking build process, and the Mustang took up so much time with the burnouts.” 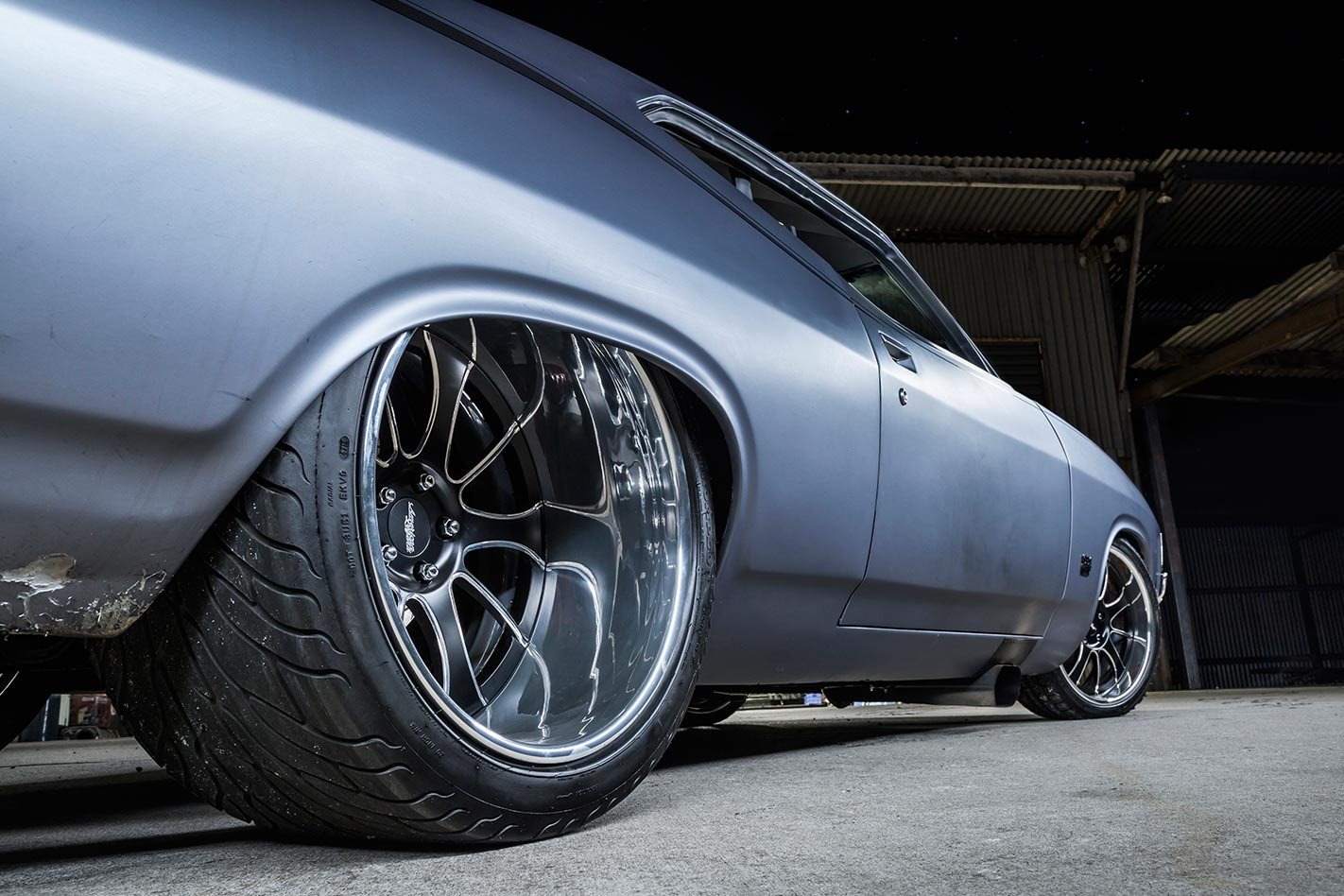 The heart of the reborn Falcon is that manic engine, based off a Dart Windsor block that spans a 9.5-inch deck height and 4.125-inch bore. However, it was de-stroked using a Callies crank, CP pistons and Crower rods. Rounding out the internals are Crower lifters, Crow pushrods and a same-brand custom-grind solid-roller cam.

“Because my engines have always been known as small-blocks I’ve always wanted to build a big-inch, big-bore Windsor,” Gary says. “[WA burnout maestro] George Separovich asked me what I wanted to rev this engine to and I said 8000rpm, so he said he’d need to de-stroke it, which I didn’t want to do initially.

“While it is a big-cube bore, George ordered the rotating assembly for me and it came out at 360 cubes. All it wants to do is rev – we have a 9000rpm chip in it and it is hard to keep it off that.” 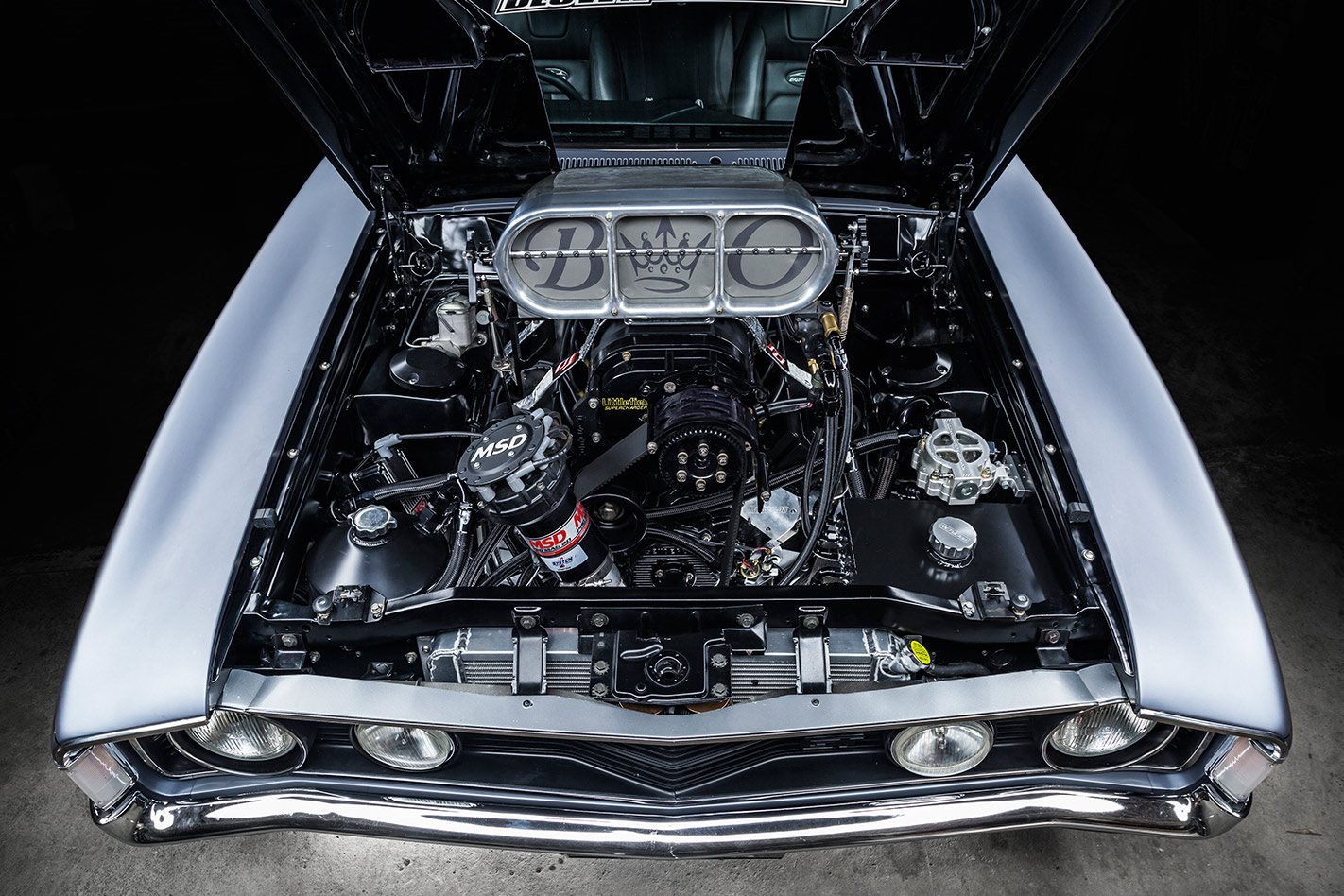 The blown, mechanically injected 360ci Windsor swallows 22psi worth of boost, topped by that sky-high custom King’s Crown hat on a Fowler injection body. Changing from its former carburettor-fed low-pressure fuel system to the higher-pressure injection meant new lines and engine bay-mounted tanks to hold the methanol, as well as the new Enderle pump

Head castings are mammoth Kaase P38 units stuffed with Yella Terra platinum rail rockers, Ferrea valves and Isky valve springs. The motor is dominated by that humungous top end, featuring a Littlefield 8/71 blower on a billet Joe Blo intake manifold, with Fowler injection and a custom CNC-machined billet throttlebody from Len Grass Engineering. Ignition is handled by an MSD Pro Mag 20 set-up, with methanol supplied by the Enderle pump at a scary rate. 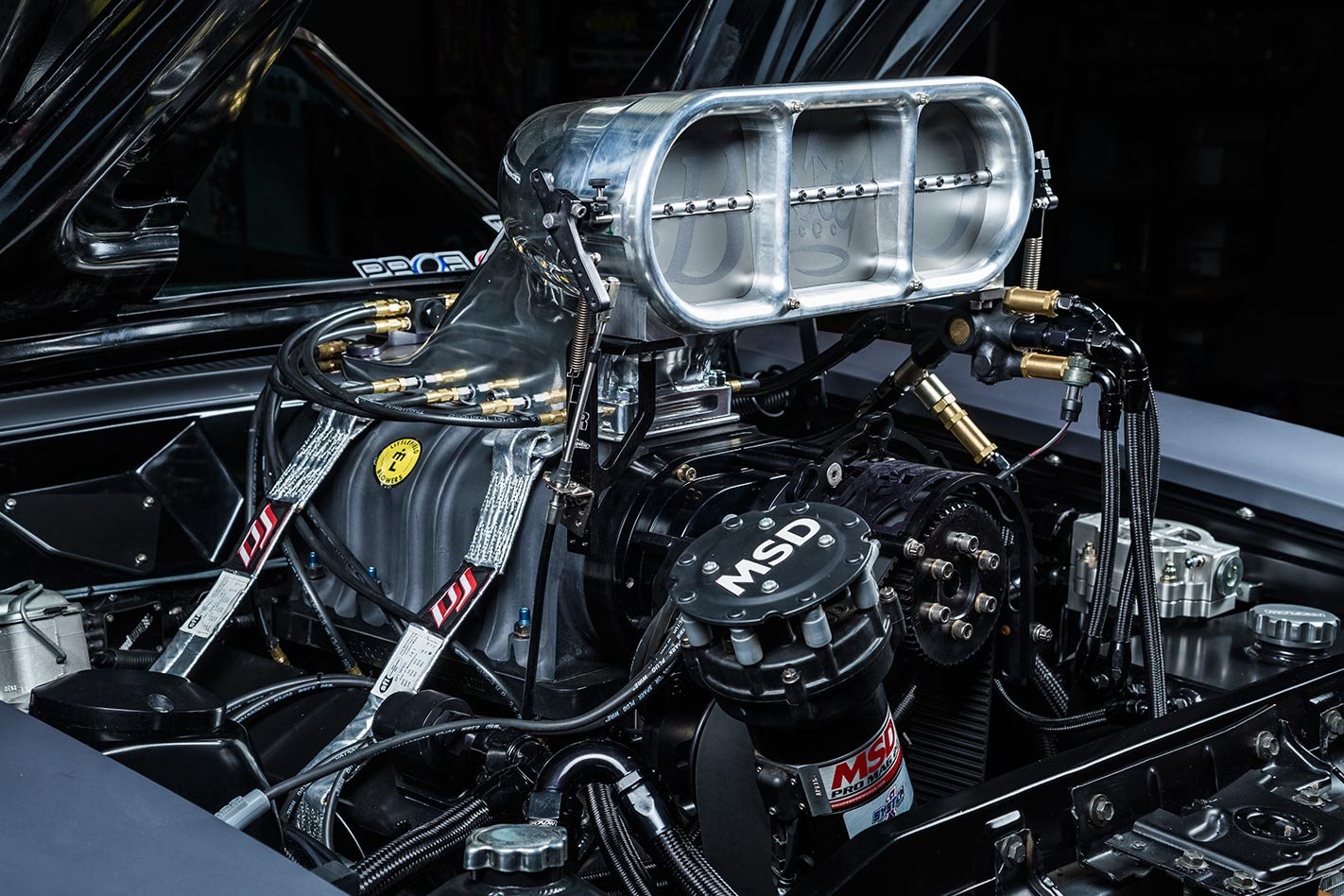 Len Grass Engineering took a solid chunk of metal and CNC-machined an awesome billet throttlebody for AGROXA, feeding a huge amount of air into the rpm-friendly Windsor. The bottom of the engine features more billet goodness with the CNC-machined oil pan from Dailey Engineering and four-stage dry-sump oil pump

Custom-fabricated and ceramic-coated Racers Choice pipes with side-exit tubes promote the de-stroked Windsor’s ferocious bark to the atmosphere, while a custom Aussie Desert Cooler radiator works with the methanol to cool the monster motor. 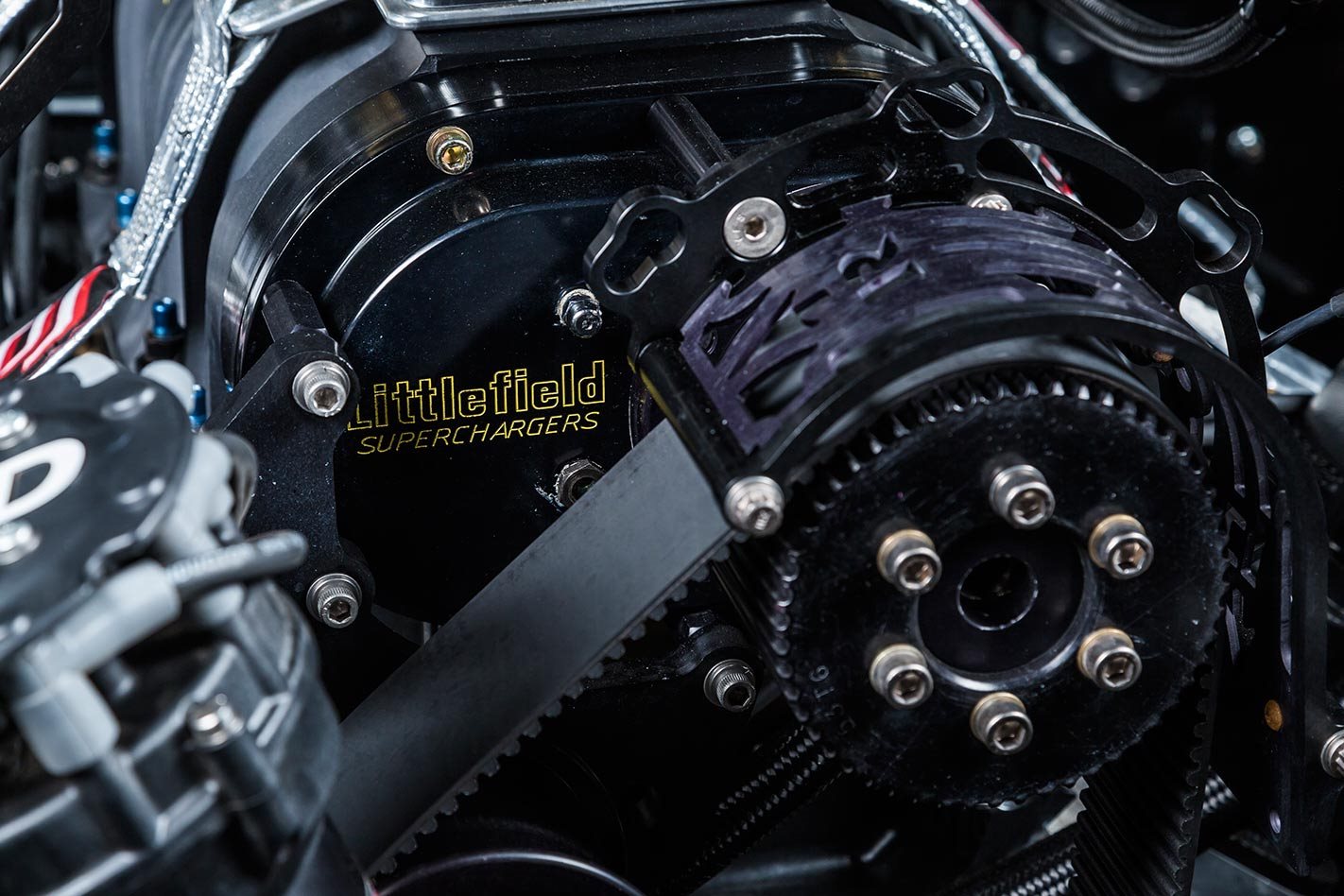 “We’re now on top of methanol tuning,” Gary says. “George does the main set-up and then I refresh it with the help of the Racepak data-logger and dash. My son Jake downloads all the data after a run and we make adjustments from there. We focus on the eight exhaust gas temp probes as that can pinpoint exactly where the problem stems from – oil pressure or temperature issues; lean or rich temperatures.”

While the Racepak isn’t cheap, Gary sees the ability to datalog every aspect of the motor as a form of insurance. “I remember my first engine was $4500, the second one was $5500, but these days they are very expensive when you hurt one – it can cost $10,000 just to fix an engine!” 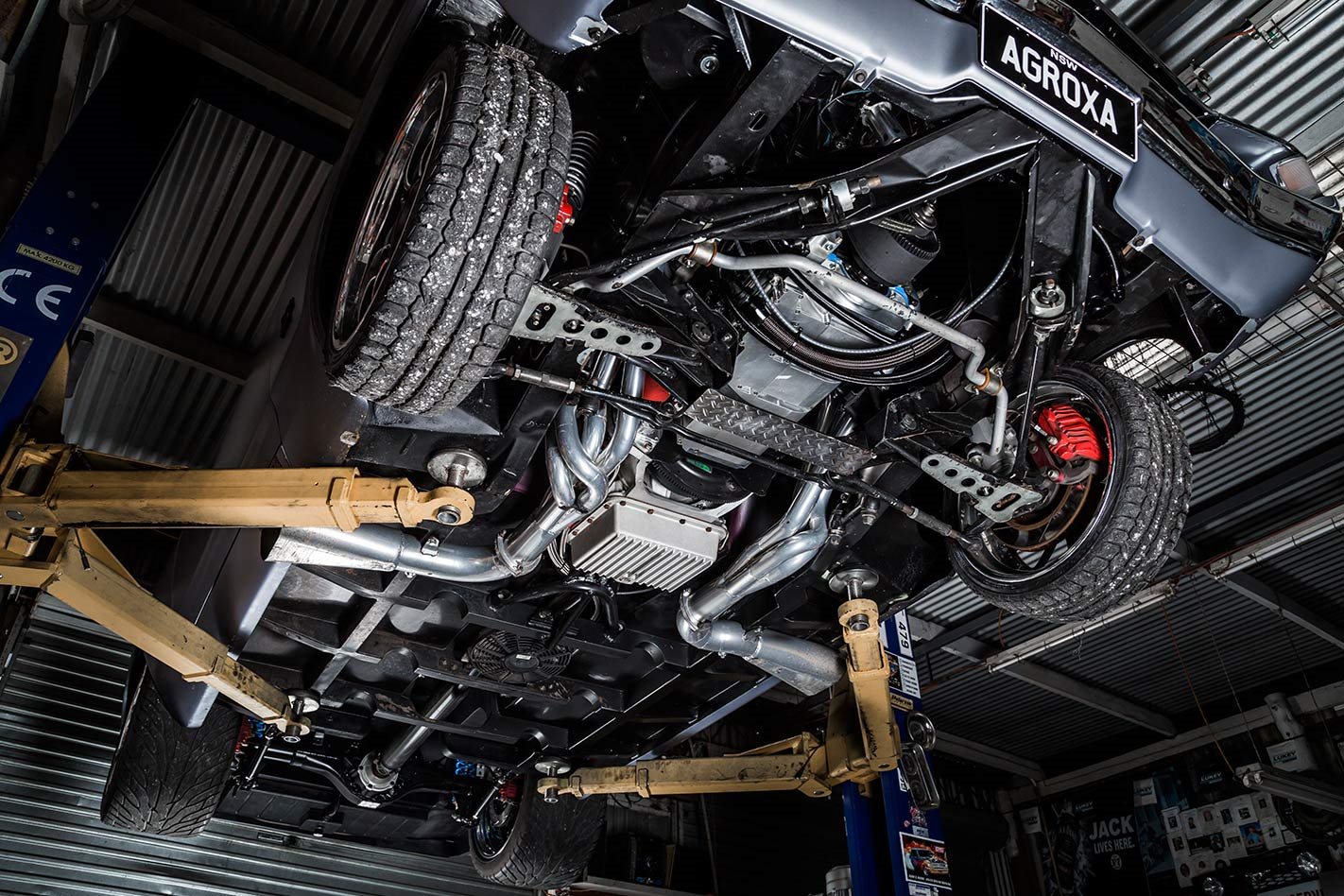 Hurling a car around a burnout pad like the pros do means the oiling system needs to be as good as you’d find in any international top-level motorsport engine. The Dailey Engineering billet sump sitting under the Dart block is a piece of absolute art, with a billet oil pump, also from Bill Dailey, looking the goods while providing stable oil pressure

After a madcap dash from the NSW Riverina to Perth over the 2017 Easter long weekend, George Separovich tuned the XA’s engine combo at his business Blown Motorsports. In the end it made 923hp at the bags, which Gary says is a complete handful, both on the pad and in powerskids. 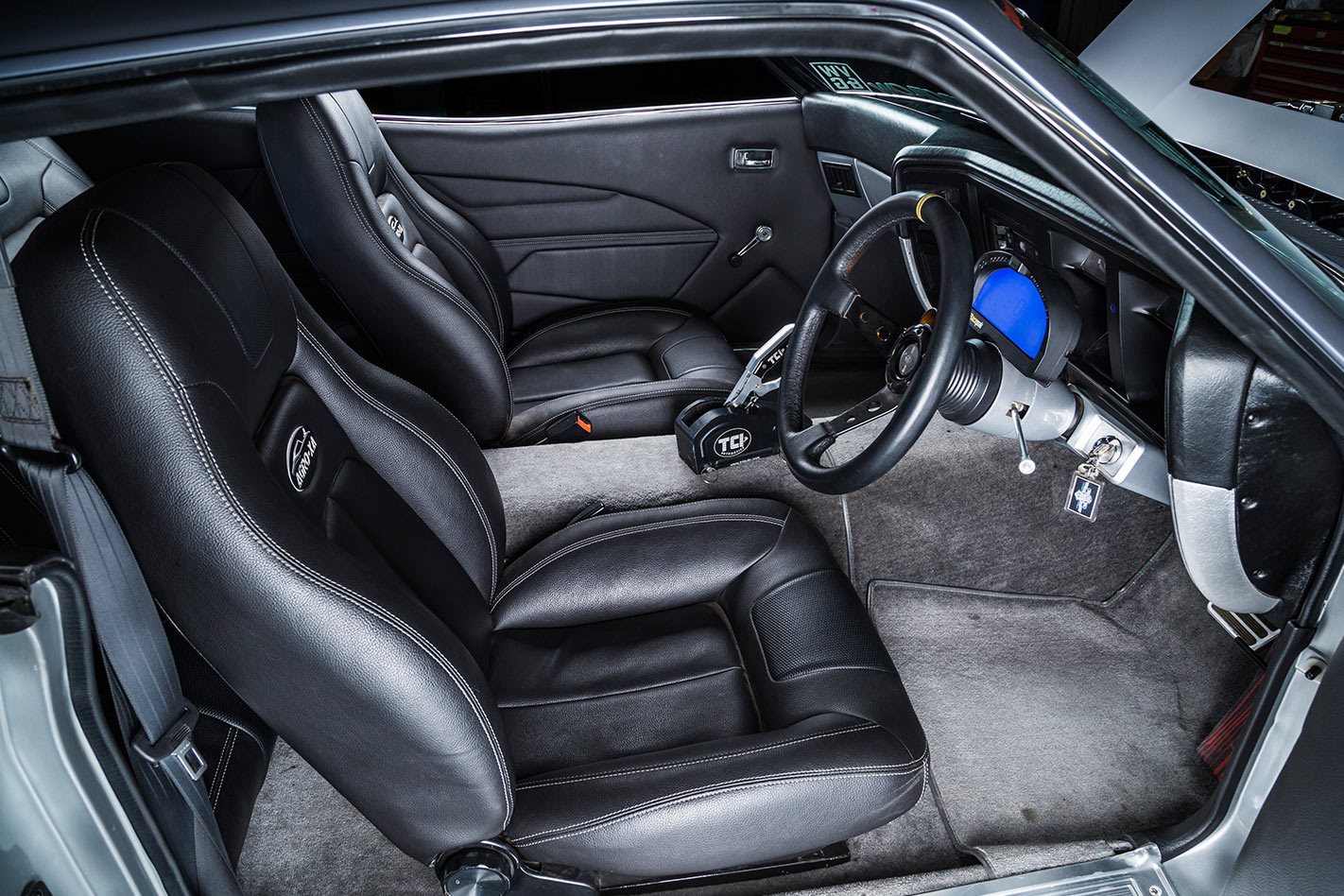 “You always know where the engine is happy and I couldn’t keep it off 8000rpm, so the 9000rpm chip went in the limiter,” he says. “During the powerskids in Cairns recently we saw the engine get to 10,000rpm a couple of times!” 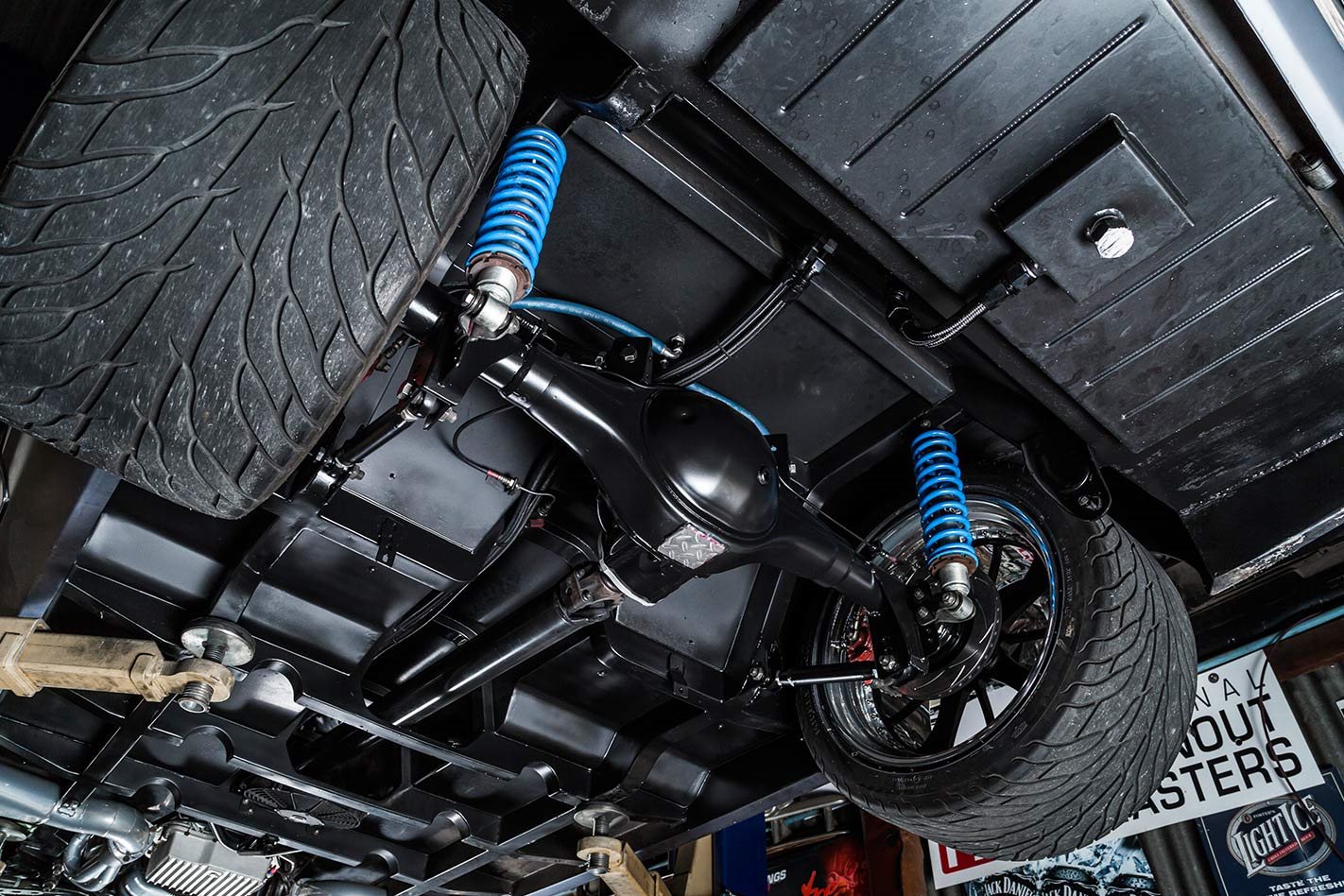 The diff is located by a triangulated four-link arm rear end that replaces the stock leaf springs to give more room for tyres, as well as being better able to handle the force nearly 1000hp unleashes. Up front is an RRS strut front end, with electric power assistance to the stock power steering box set-up. 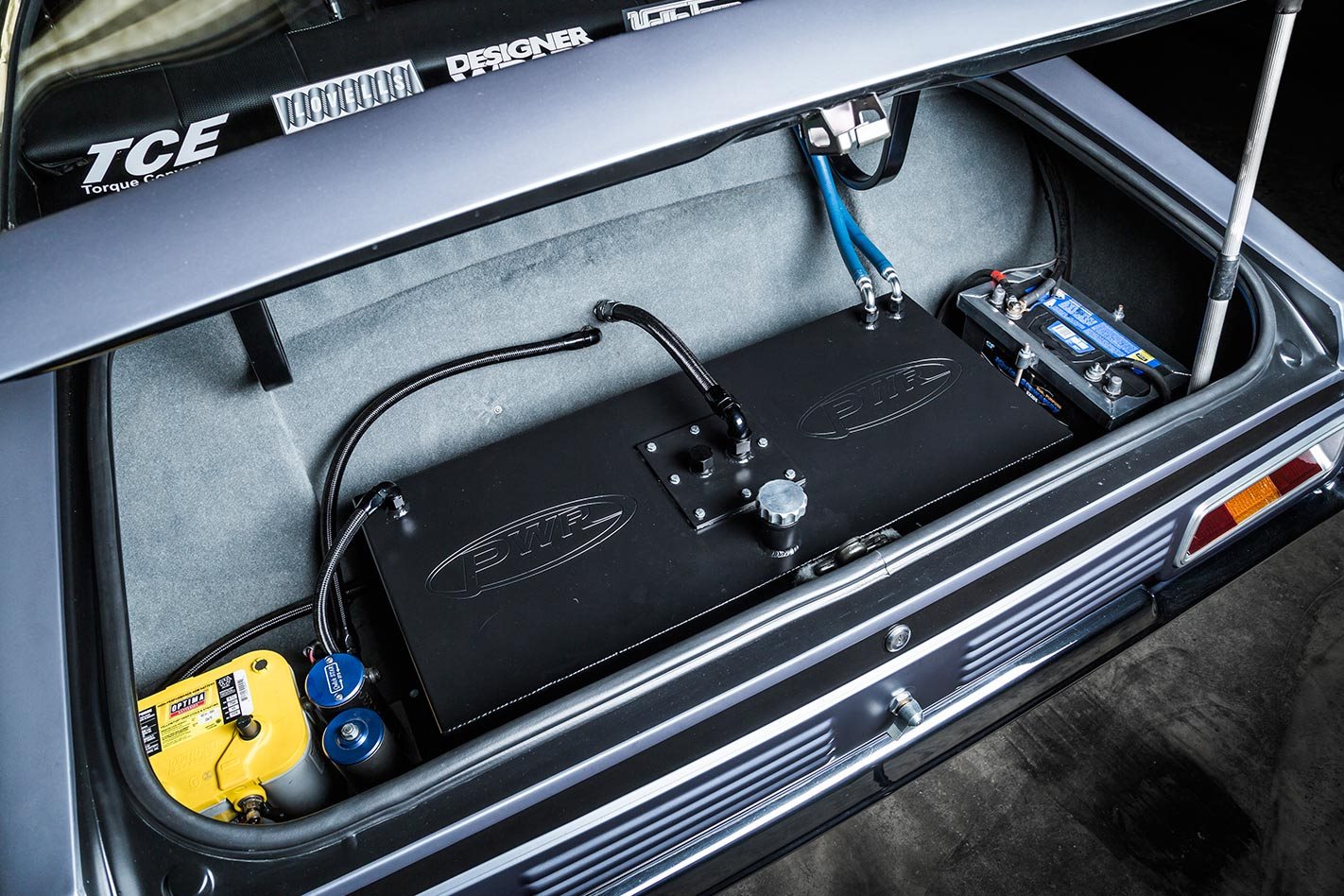 “Throwing it in, it is a big tank and you don’t know which way it wants to go,” Gary admits. “The electric pump can’t keep up and it gives you a false indication of what it wants to do; you just throw it in and hope it comes around. Once it’s around it’s pretty easy from there. The powerskids are the most challenging – I get more of an adrenaline rush from the powerskids, as it gets twitchy up around the 100mph mark!” 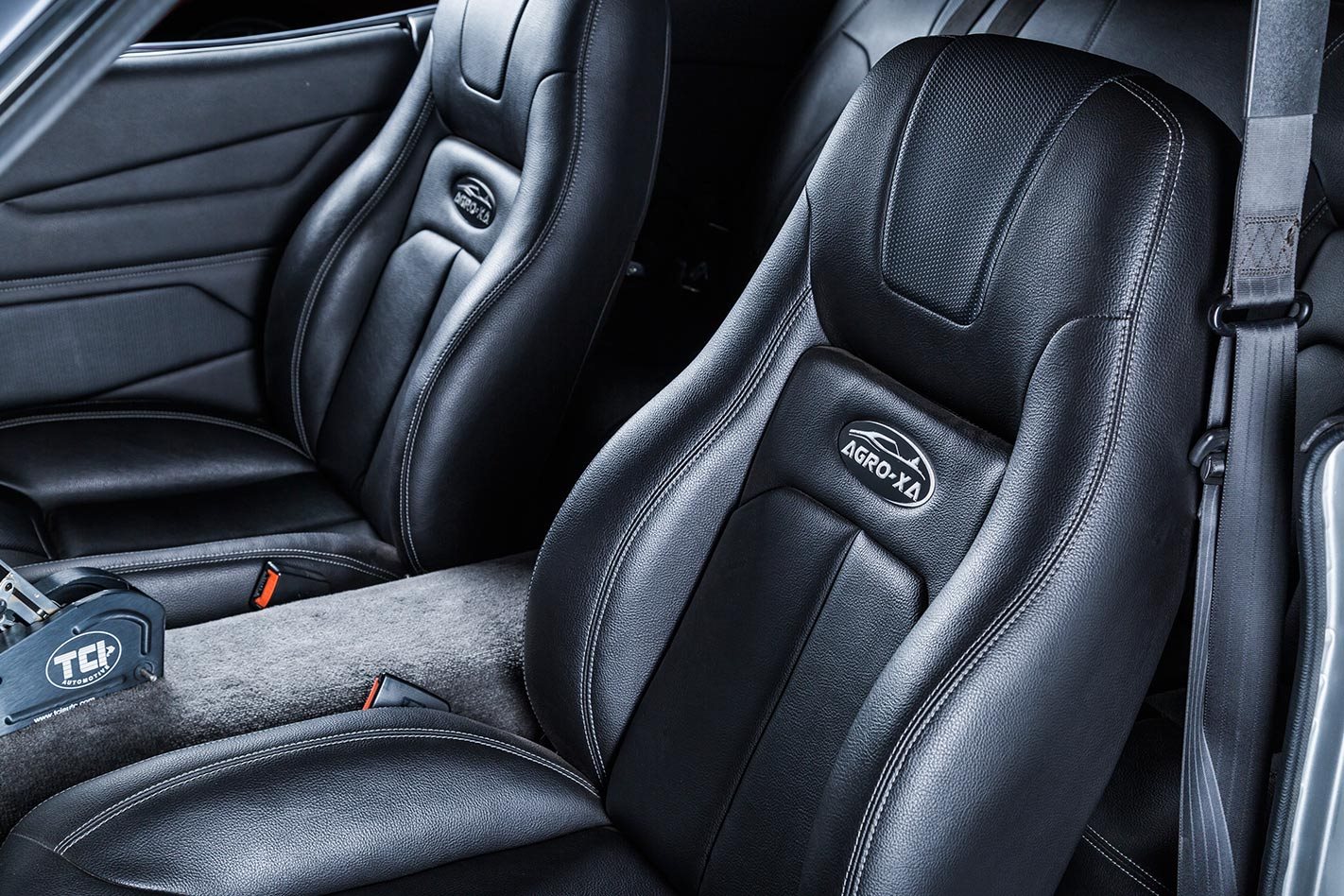 Long-term readers should remember the coupe’s former paint scheme from when it was the aspirated XACUTER. Back in 2008 it wore a contemporary two-tone violet and silver HOK scheme, but this has been replaced with a matte silver 3M Designer vinyl wrap by Matt at Melbourne’s Vinyl Wraps & Graphics, although the engine bay was painted satin black. 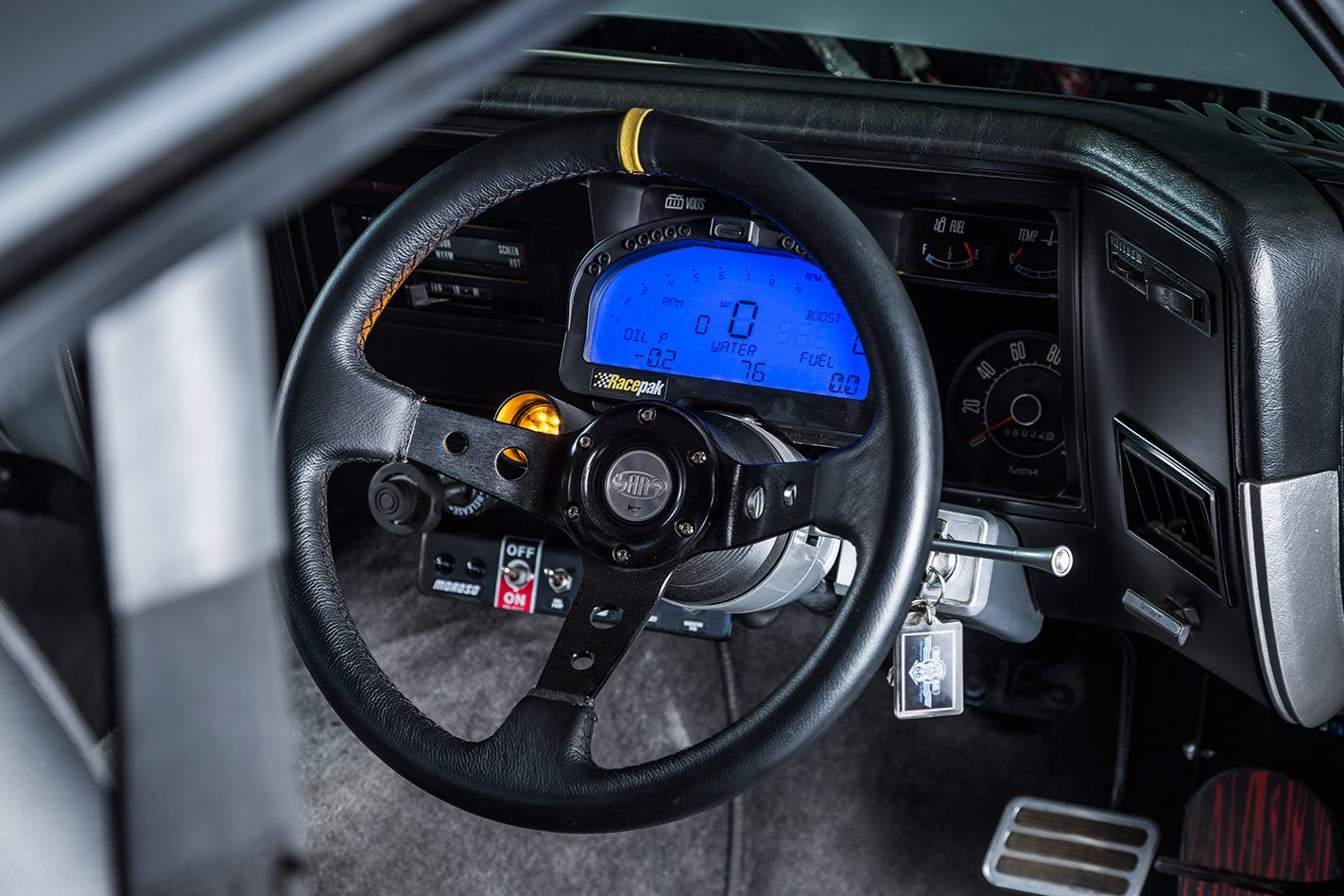 While the inside of a burnout car doesn’t need to be the flashiest, Gary is the legend who ran his famous flamed GM176 Mustang in Top 60 trim at the Lake Gairdner salt flats in 2001, so it’s no surprise AGROXA’s interior looks the business. Elite Custom Interiors has covered the XB GT front seats and custom rears in black leather, while there is a SAAS tiller, TCI pistol-grip shifter, and Racepak IQ30 logger digital display to keep Gary and passengers entertained.

The good news for Myers fans is that Gary will have the car at a bunch of events over the rest of the year, starting with Gazzanats in Darwin on 19 August but aiming for a spot on the pad at Summernats 31. 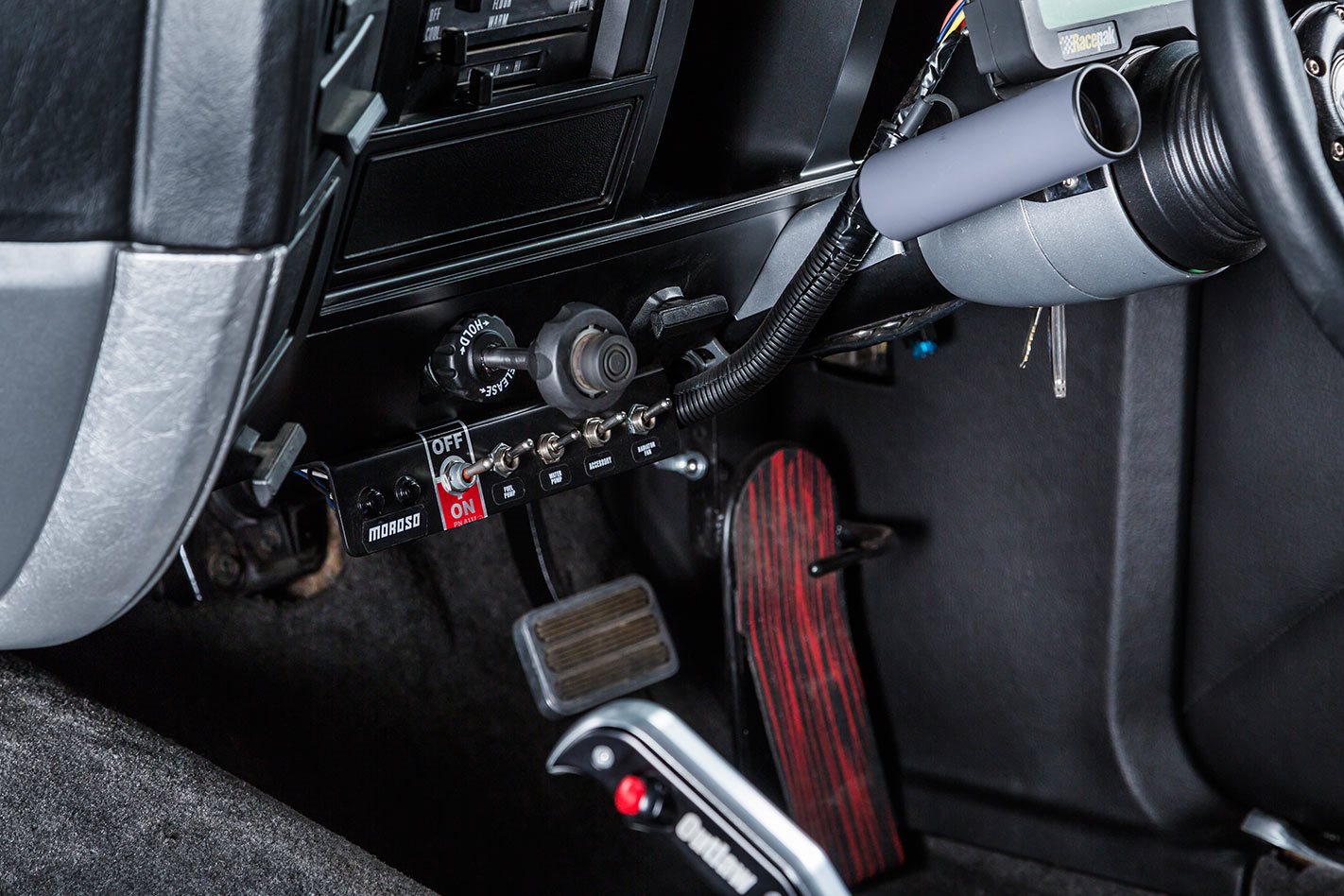 “Hopefully I pick up a Masters entry; I think I have a pretty good chance,” Gary says. “I’d be happy to get a Wildcard, but it would be great for Jake and I to get tickets to the Masters. It will be amazing skidding against my son on the Summernats pad!” 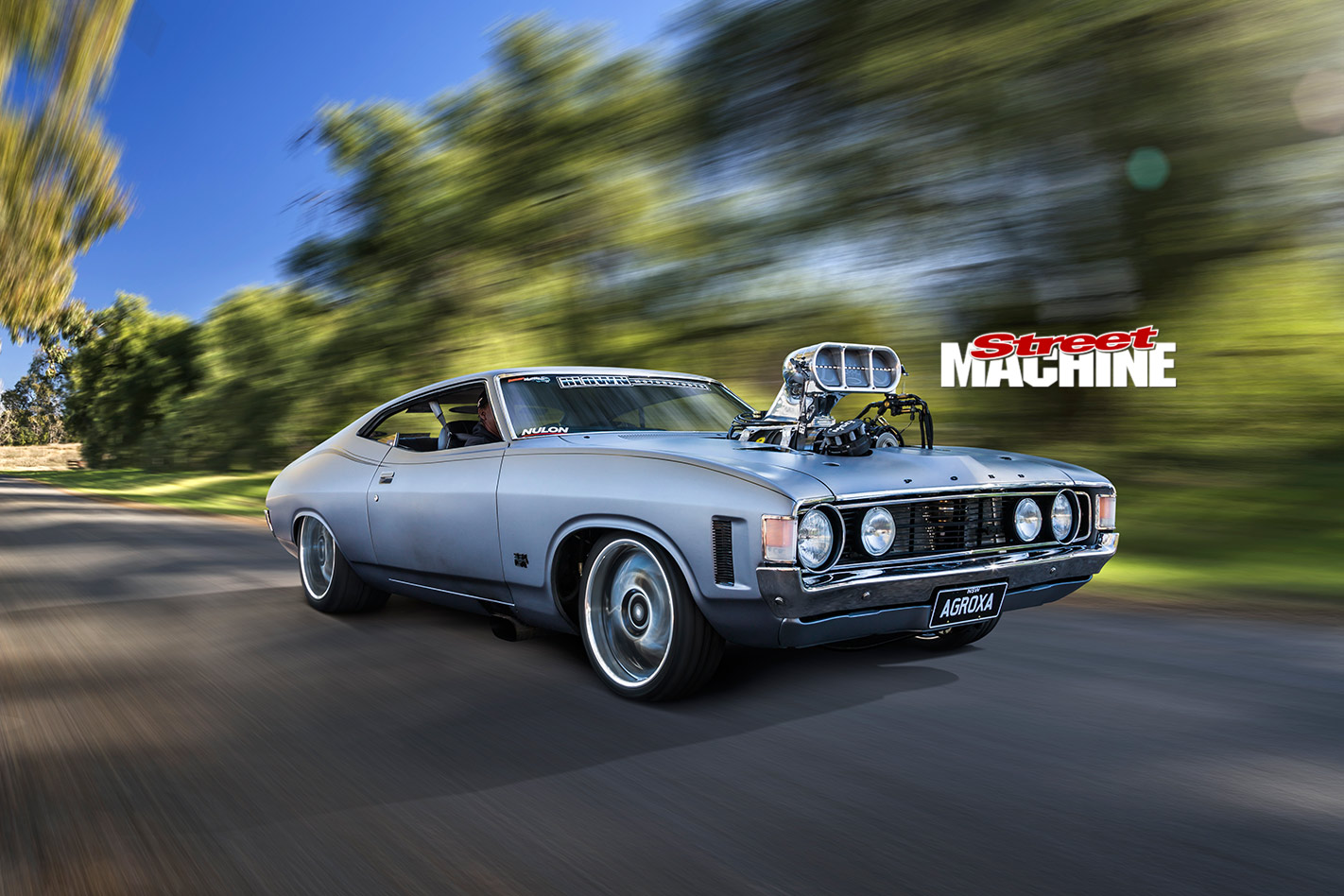