WHEN Ford launched the XR Falcon in September 1966, the Broadmeadows boys raised the bar for the Aussie family car overnight. Holden’s HR range, released six months earlier, suddenly looked decidedly old. In the process, Ford set out on a path that it and Holden still follow today — trying to out-muscle each other on the dyno — and in the process created a whole new genre of performance car. The result of a $35million investment, the XR was based on the US Falcon but with modified rear styling to give it a Mustang-style Coke-bottle hip.

Not only was the ‘Mustang-bred’ XR bigger and more modern-looking than the HR, it offered a range of options Holden customers could only dream of, starting with the ’Stang’s 289 Windsor V8. While Chrysler was the first of the big three to offer a local V8 option, the 273 V8 AP6 was a luxury model. 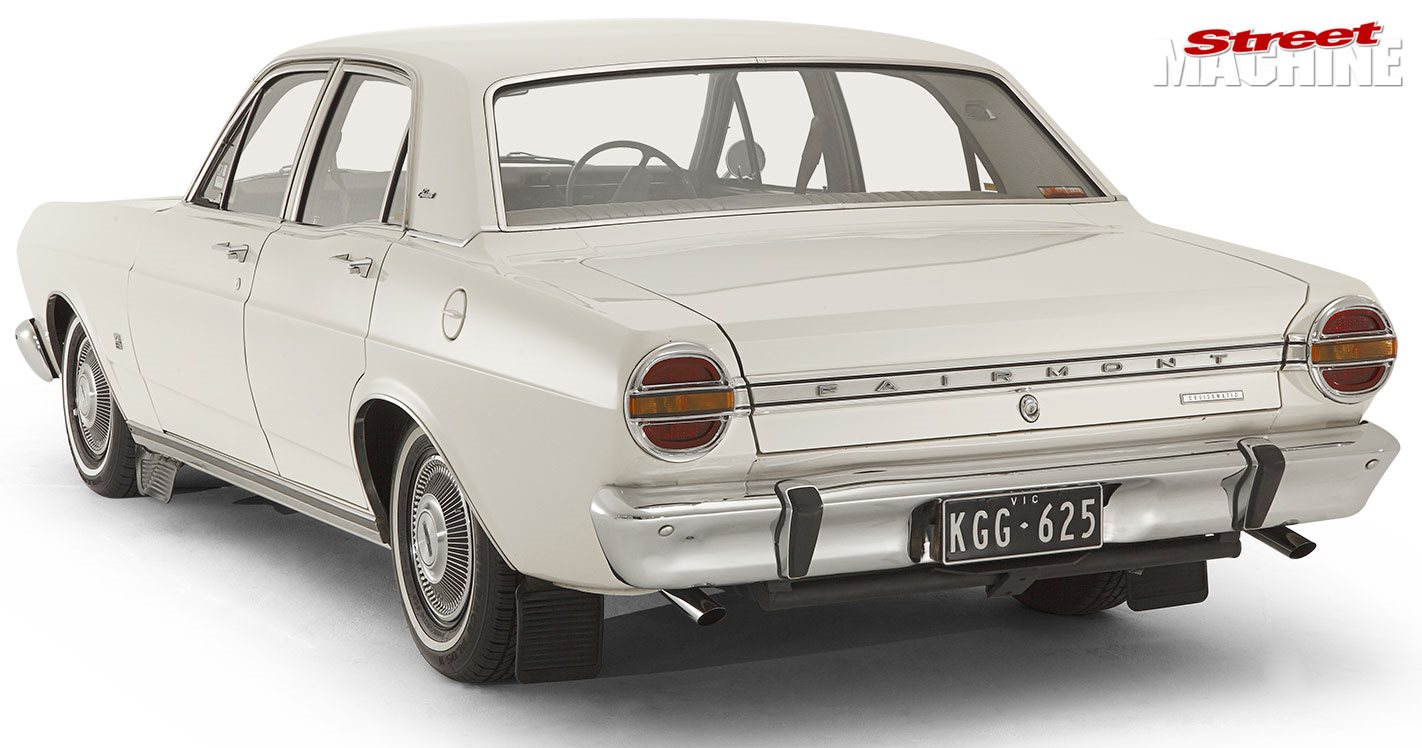 The XT was only a mild facelift of the XR — changes include a flat grille that extends beyond the sides of the headlights, and horizontal rear blinkers. The chrome strips along the waistline of the XR were lifted to the top of the doorline on the XT

Ford, on the other hand, offered the 200hp V8 from the Falcon 500 up, bringing bent-eight performance to the masses. The best the HR had was the 144hp X2 six. And that was just the start — Ford soon released the ZA Fairlane, the first full-size luxury car built in Oz, then the Falcon GT, the first Australian muscle car. There was a new ute and a van too, although the two-door hardtop was dropped, having failed to catch on with the conservative Australian car-buying public.

Even on a detail level, the Falcon had the edge, offering an all-synchro three-speed option and 14in rims — neither of which were available on the HR. New goodies on the XR’s options list included disc brakes (previously only available on the Fairmont), a remote boot release and even a stereophonic tape player! It scooped Wheels Car Of The Year — the second on the trot for Ford. 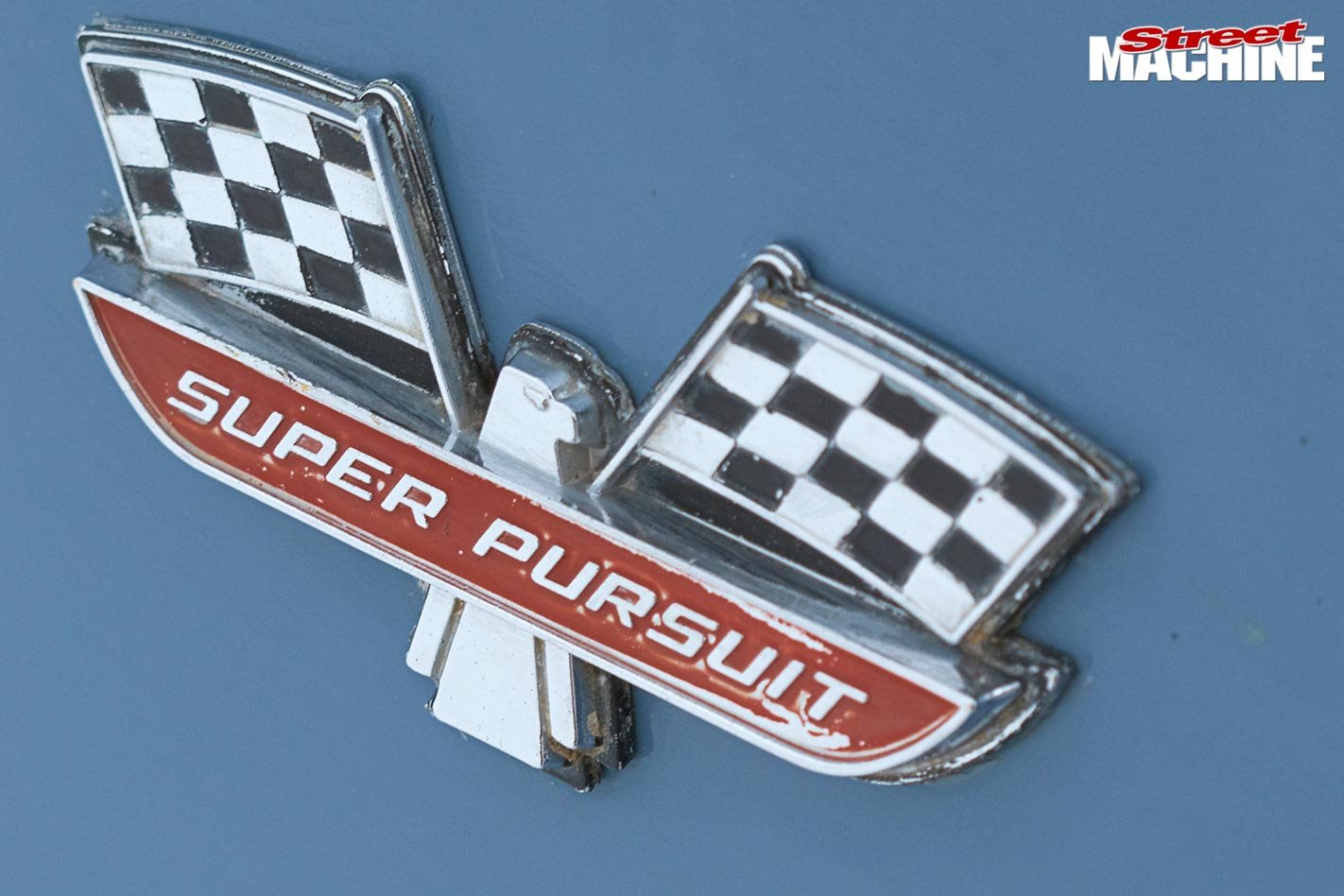 The improvements over the XP started with power. The baby 144-cuber was dropped and the 170 and 200ci sixes were tweaked to cope with the XR’s extra 300lb. That weight meant the XR accelerated more slowly than the XP, although top speed was lineball.

The clutch for all three engines was beefed up and converted to hydraulic operation, while the manual three-speed came in for stronger internals to cope with the power boost. The Fordomatic single-range three-speed auto was kept for the 200 but a second auto option — the Cruise-o-matic from the Galaxie — was introduced as the natural partner for the 289. 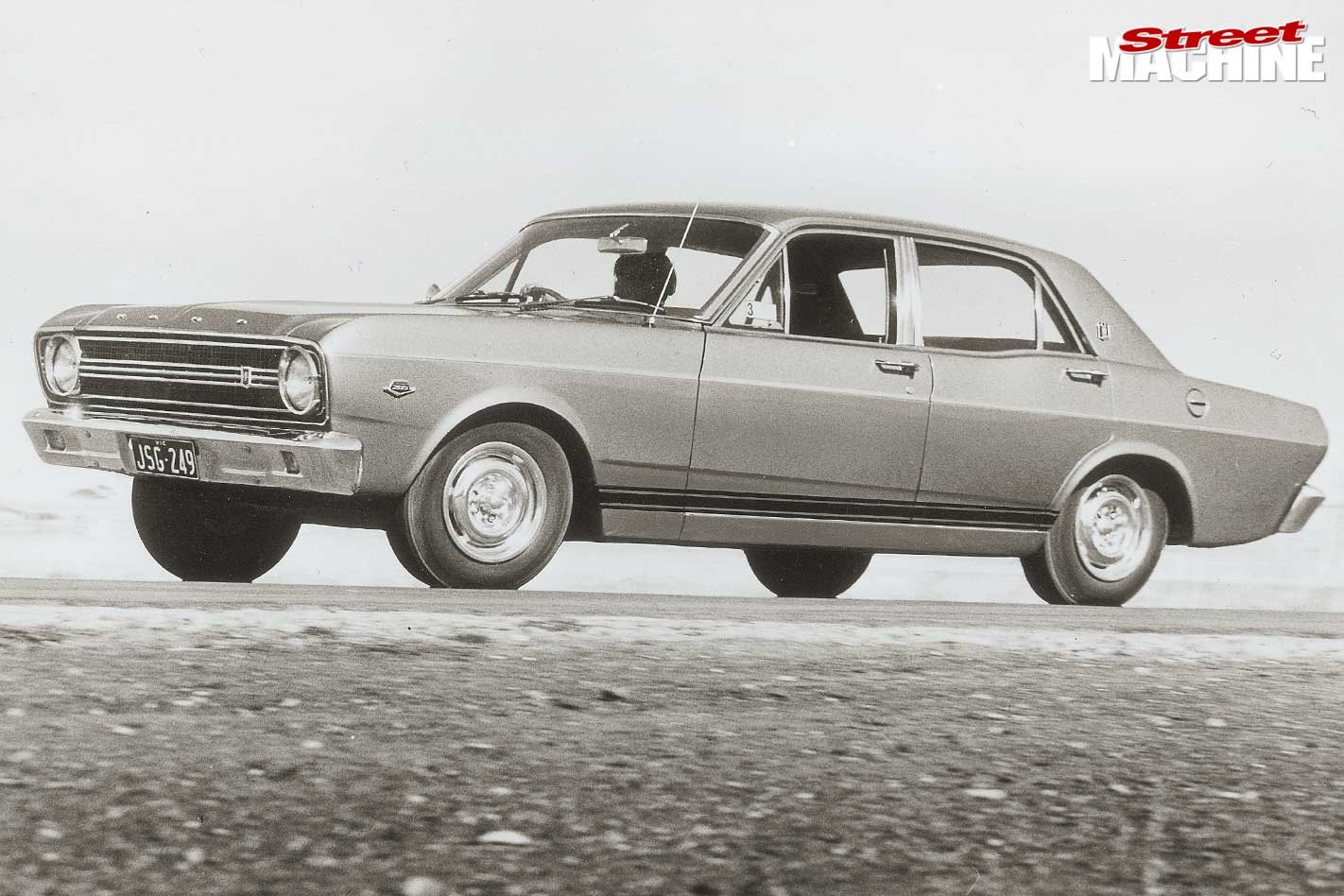 The V8 also meant a stiffening of the chassis for the whole range, with the torque box that was introduced on the XP dramatically extended. Then the suspension came in for attention, with heavier coils up front and longer leaves at the rear, and the whole shebang reinforced. Disc brakes were made optional on the base models, with larger drums fitted as standard. All that, coupled with a longer and wider wheelbase, meant the Falcon had superior roadholding for the period, and it wasn’t hard to extract more performance from the set-up.

Which is exactly what Ford did with the introduction of its most famous badge — the GT — just eight months after the XR was launched. Based on a police special, the GT didn’t have a flash body kit or wild graphics. To show you were looking at our first true muscle car, the GT emblem was clipped to the front, rear and C pillars, with stripes on the lower doors over GT Gold paint. 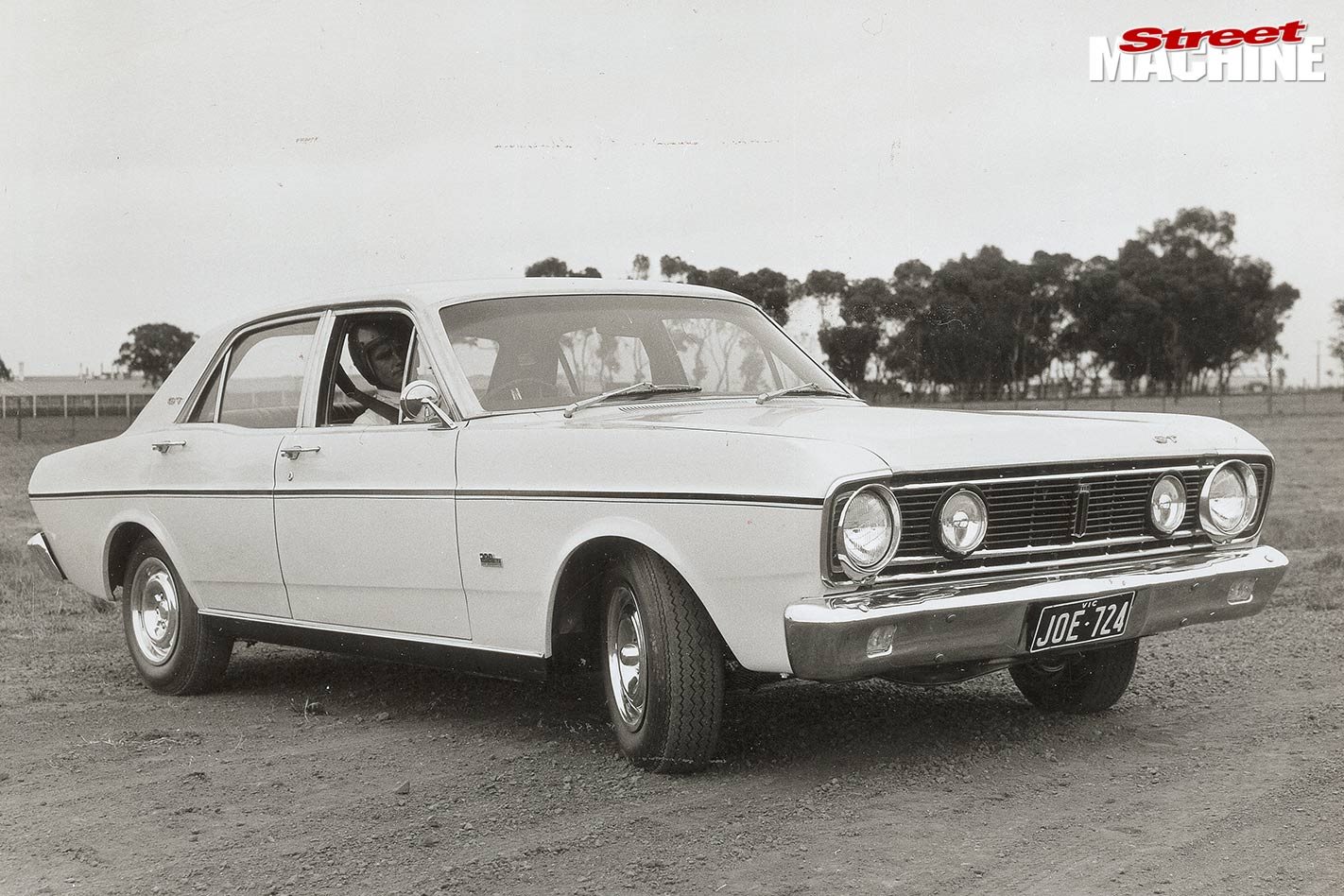 The real story was under the bonnet, with the 289 coming in for a compression boost (from 9:1 to 9.8:1), a lumpier cam and a four-barrel carb to notch power up to 225hp, backed by a four-speed manual ’box.

The XR GT found immediate success on the racetrack, with the factory-backed GTs of Harry Firth and Fred Gibson winning the 1967 Gallagher 500 at Mt Panorama, and teammates Ian and Leo Geoghegan coming second. The XR was a sales success too, moving in excess of 90,000 units. Not enough to come near Holden’s figures but a definite improvement.

The XT arrived in April 1968, by which time Holden had launched the HK with many of the features missing from the HR — including a V8 — and even added the Monaro to the range for good measure. 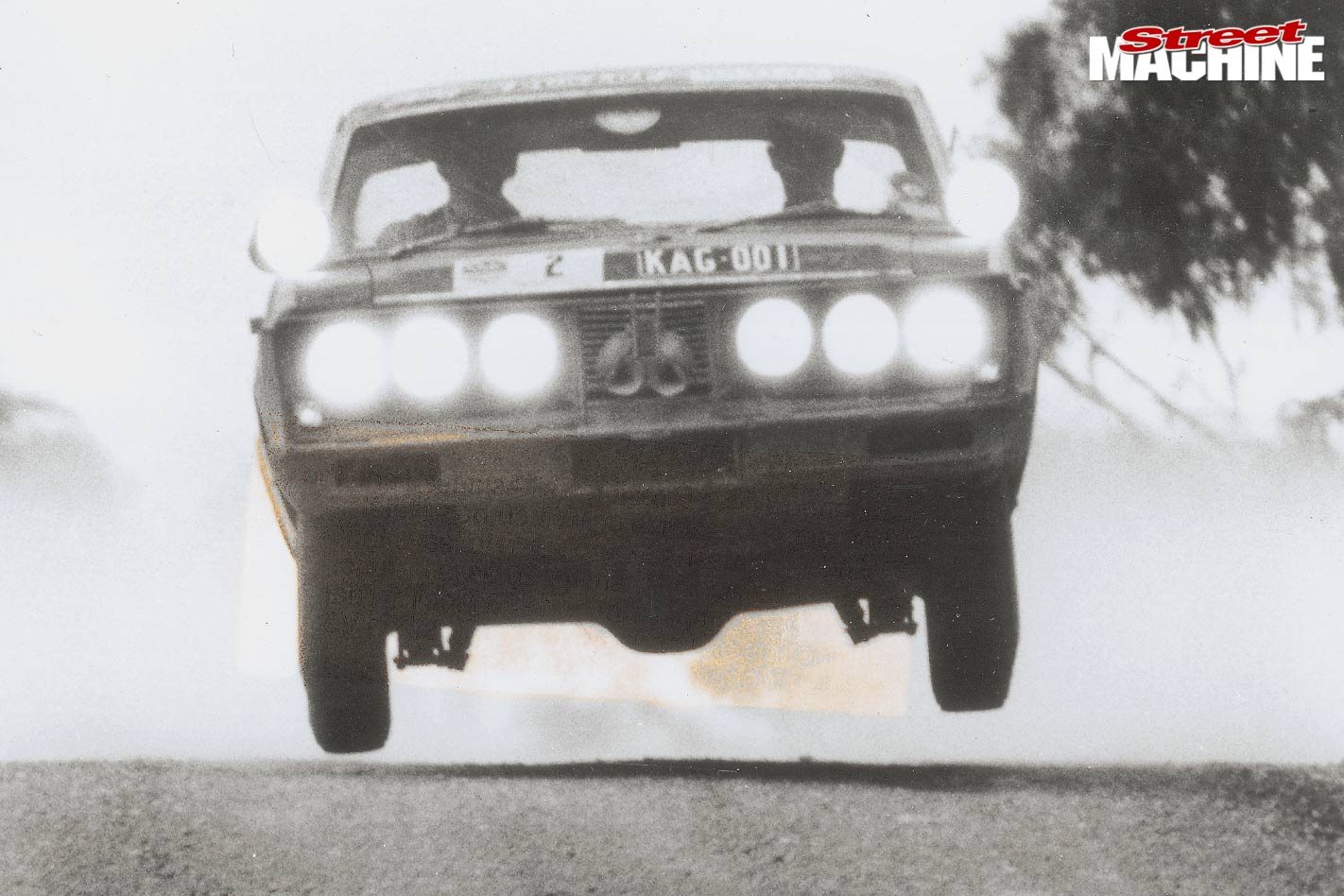 Ford entered three XT GTs in the gruelling London to Sydney Marathon in Nov ’68 — all three finished in the top 10. The fact that the event was won by a Hillman Hunter is neither here nor there!

Styling-wise the XT was a mild makeover of the XR shape, with a divided grille, inset driving lights on the GT, and the rear indicators becoming strips across the round tail-lights instead of small round centres.

The base V8 was offered with a three-speed manual for the first time, while dual-circuit brakes — a safety feature we now take for granted — were introduced across the range. 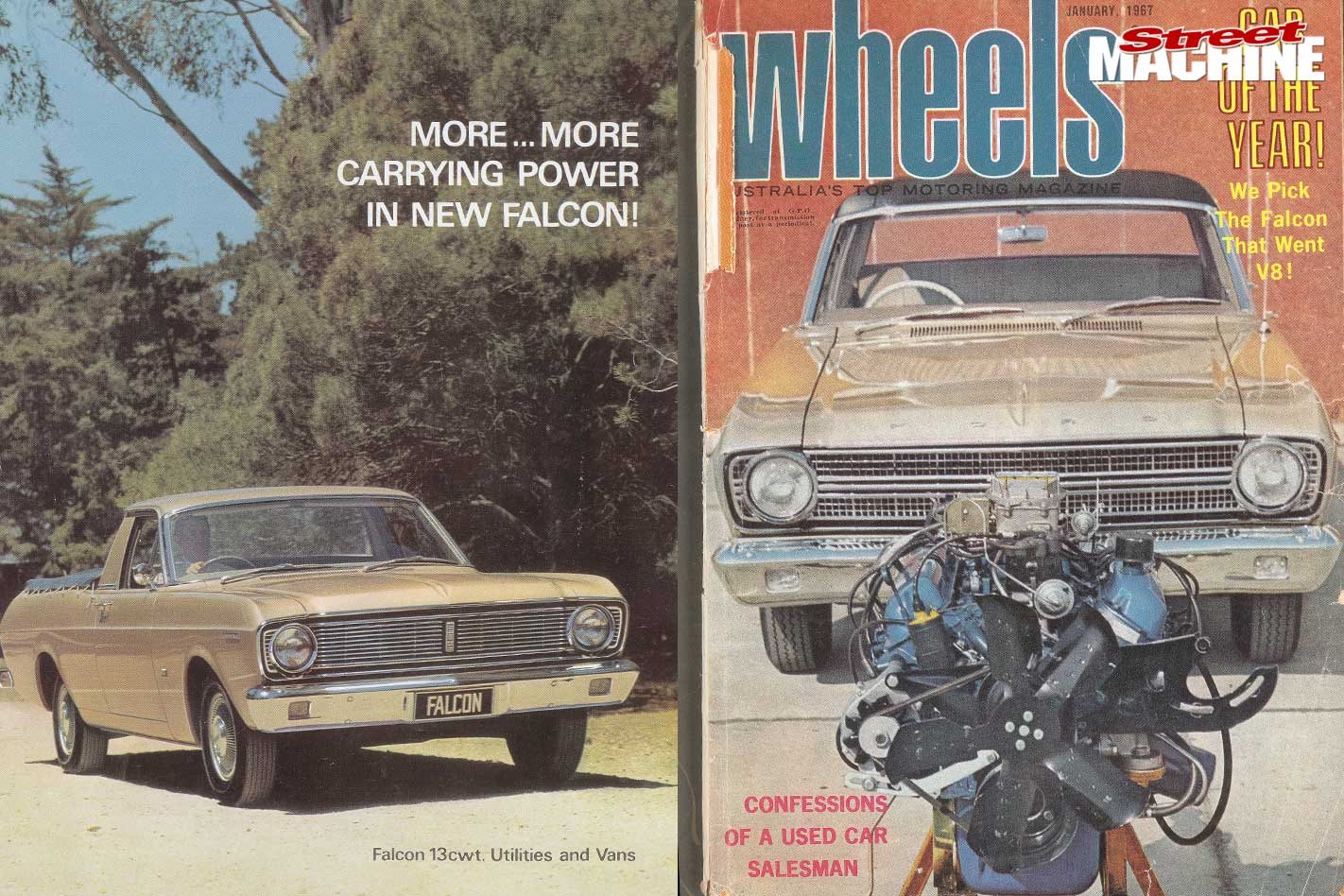 For the XT GT, the 302 was bumped up to 230hp and scored an auto option. Style-wise, it was restrained compared to later models but many road testers of the time rated it as a particularly sweet drive.

A follow-up victory at Bathurst ’68 was not to be. Fred Gibson and Bo Seaton were well placed with 15 laps to go in a factory-backed XT GT but — like most other GTs in the field — overheated, leaving the HK GTS 327 Monaros to fill four of the top five places.

Despite the disappointment at Mount Panorama, 1968 was a great year for Ford, with record total sales of 95,750. The Falcon’s market share had risen steadily throughout the life of the XR and the XT and rather than being scared off motorsport, Ford pressed ahead with plans that would ramp up the power war still further, giving birth to the most significant Australian muscle cars of all, the mighty GTHO Falcons.

LIFT a tarp if you see an interesting shape under it. Luke did, while scouting for a hot rod project, and discovered this wonderfully original Falcon 500 XR wagon. 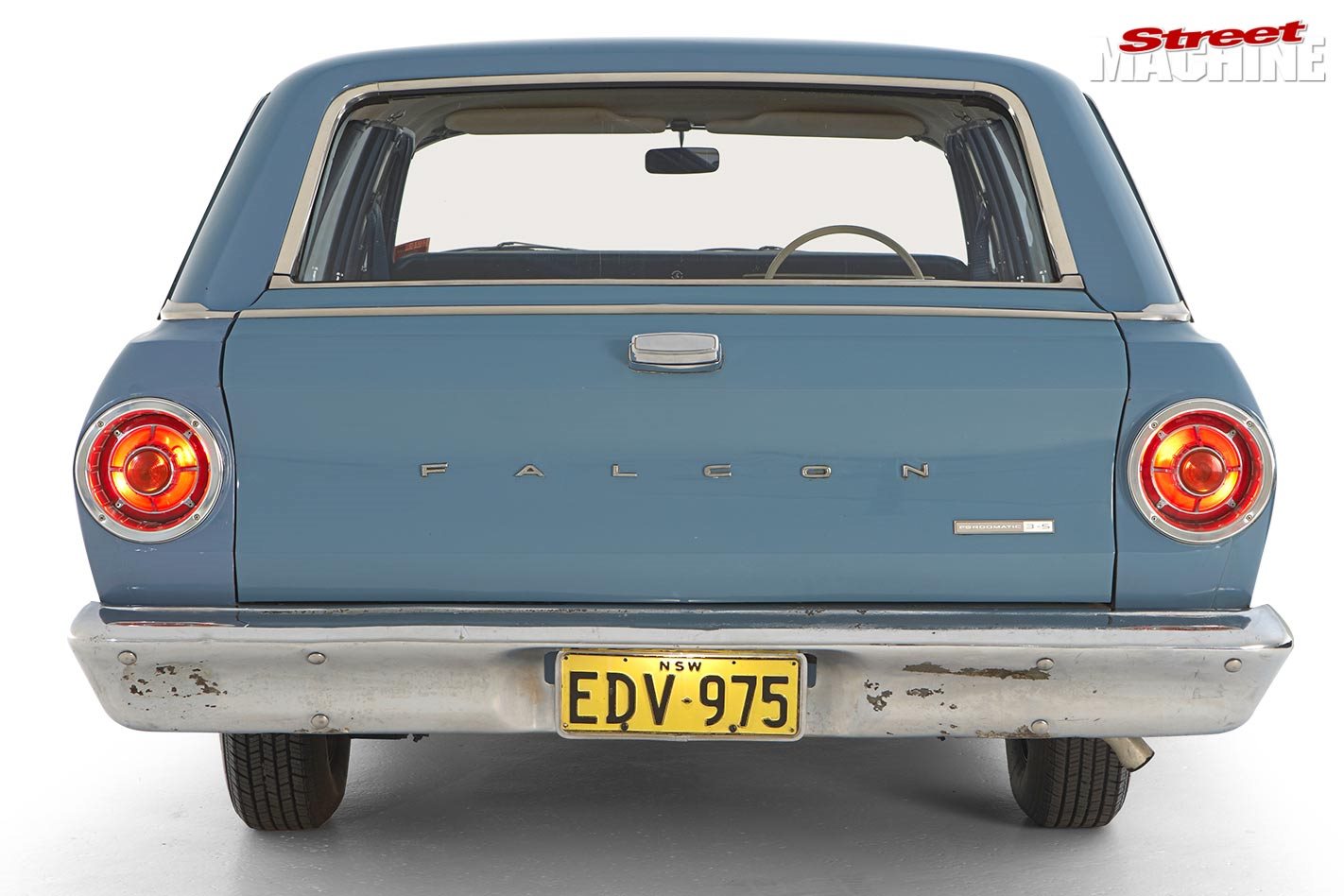 The easiest way to identify an XR is the protruding mesh grille or the round blinker in the middle of the tail-lights. Larger in every dimension than its predecessor, Ford shifted more than 90,000 XRs in 19 months

“We went to look at a ’35 sedan and I noticed this wagon shape under a tarp,” the 21-year-old Box Hill, NSW, Ford fan says. “He offered me the XR for two grand and another for parts down the back for $500 so I took them.”

With 85,000 miles on the clock, there was a little rust but nothing major, while the 200ci Super Pursuit motor only needed a head gasket and a clean-up. Luke considered a resto, until he opened the glovebox.

“I found the original manual and all the details in there, even the sales receipt,” he says. 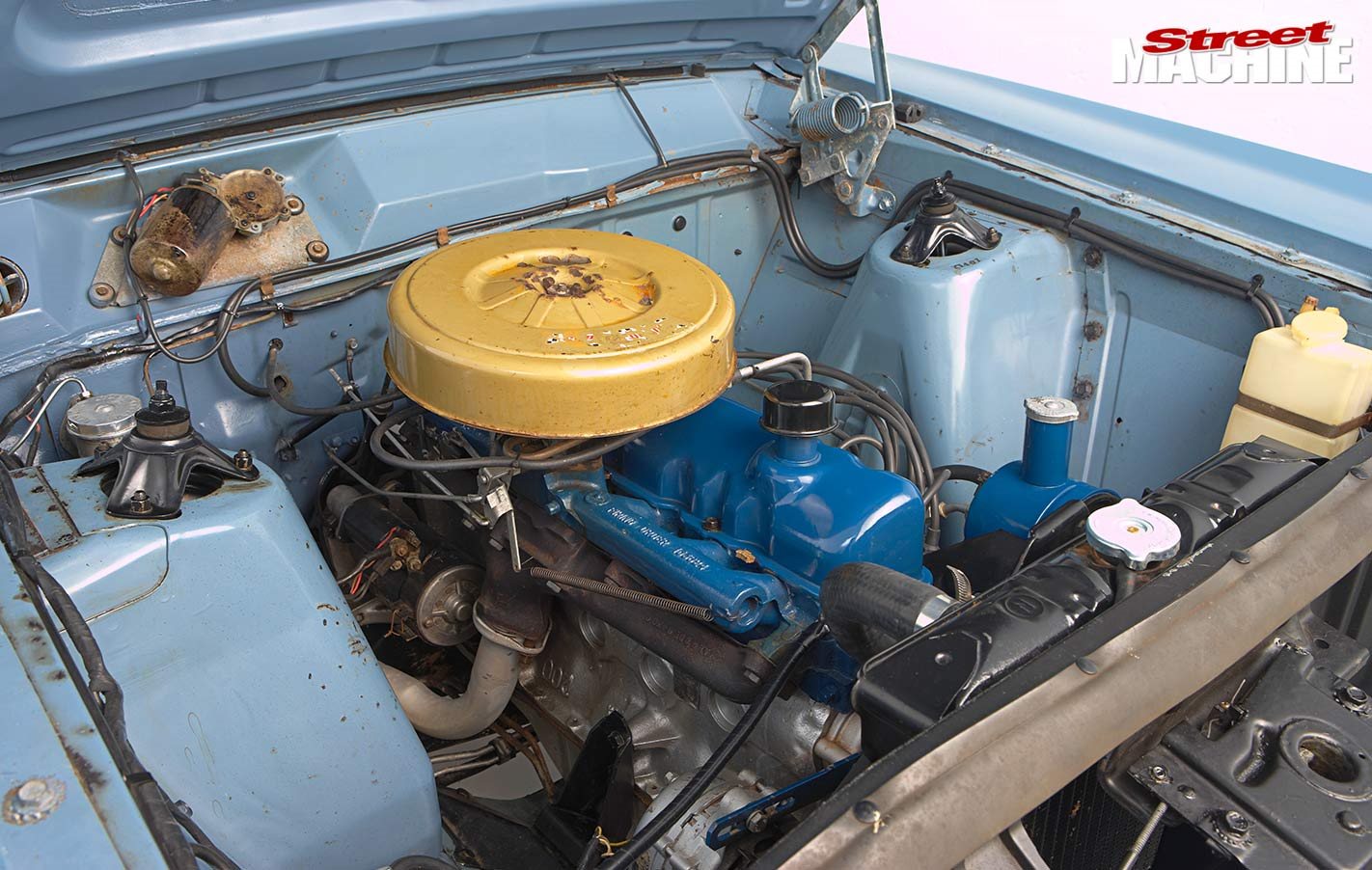 The XP’s baby 144ci six was dropped from the options list, leaving the 170 and 200ci Super Pursuit motors and the new 289 V8 as the only engines available in the XR. A lockable bonnet was now standard across the range

Apart from tapping out a few dents and touching up the paint, there was no way he was going to alter this car without long, hard thought: “They’re only original once!” says Luke. “It is an interesting car. It came with power steering, but missed out on a radio, heater and side mirrors.” 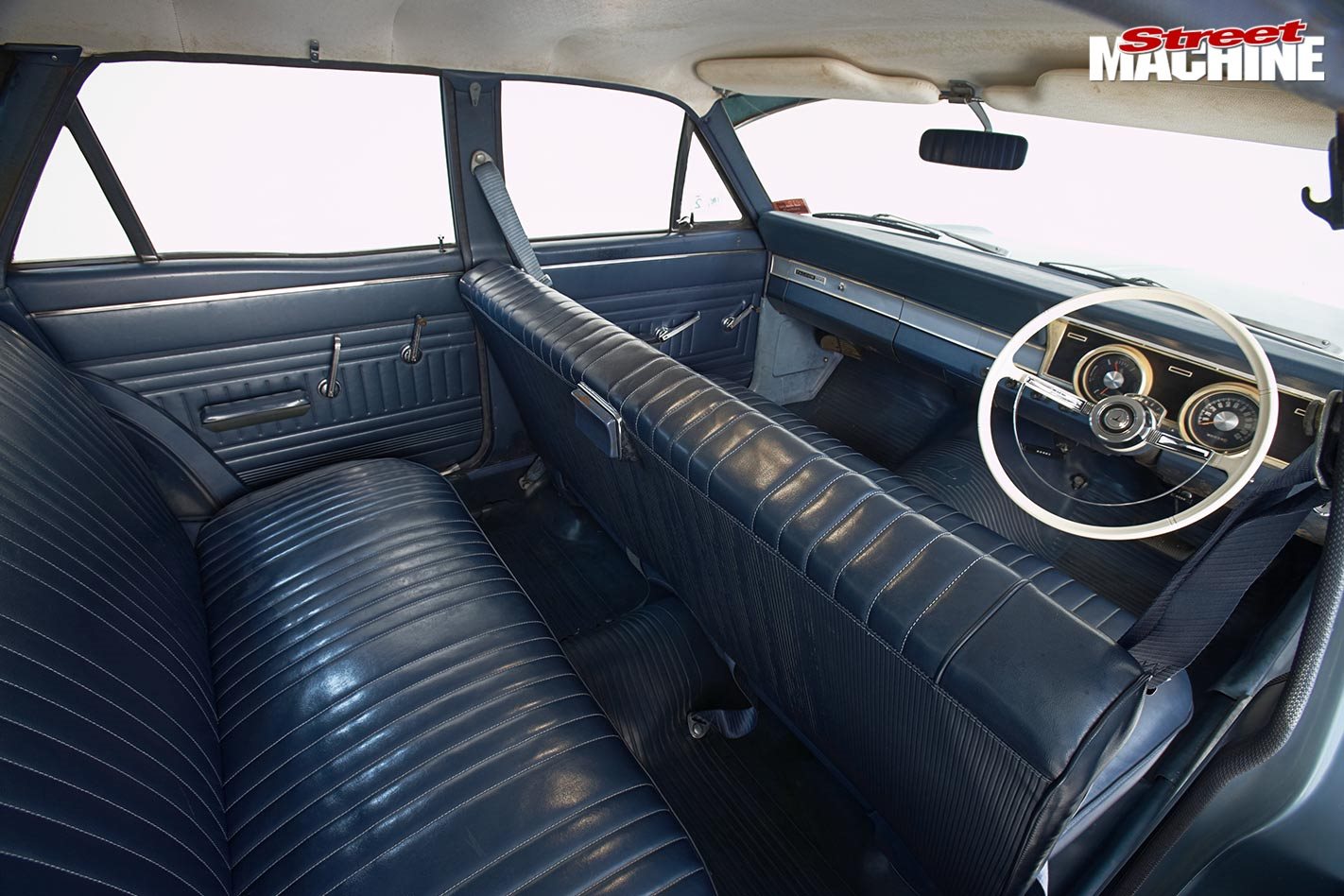 He’d like to thank his family and friends for helping out with the car along the way. 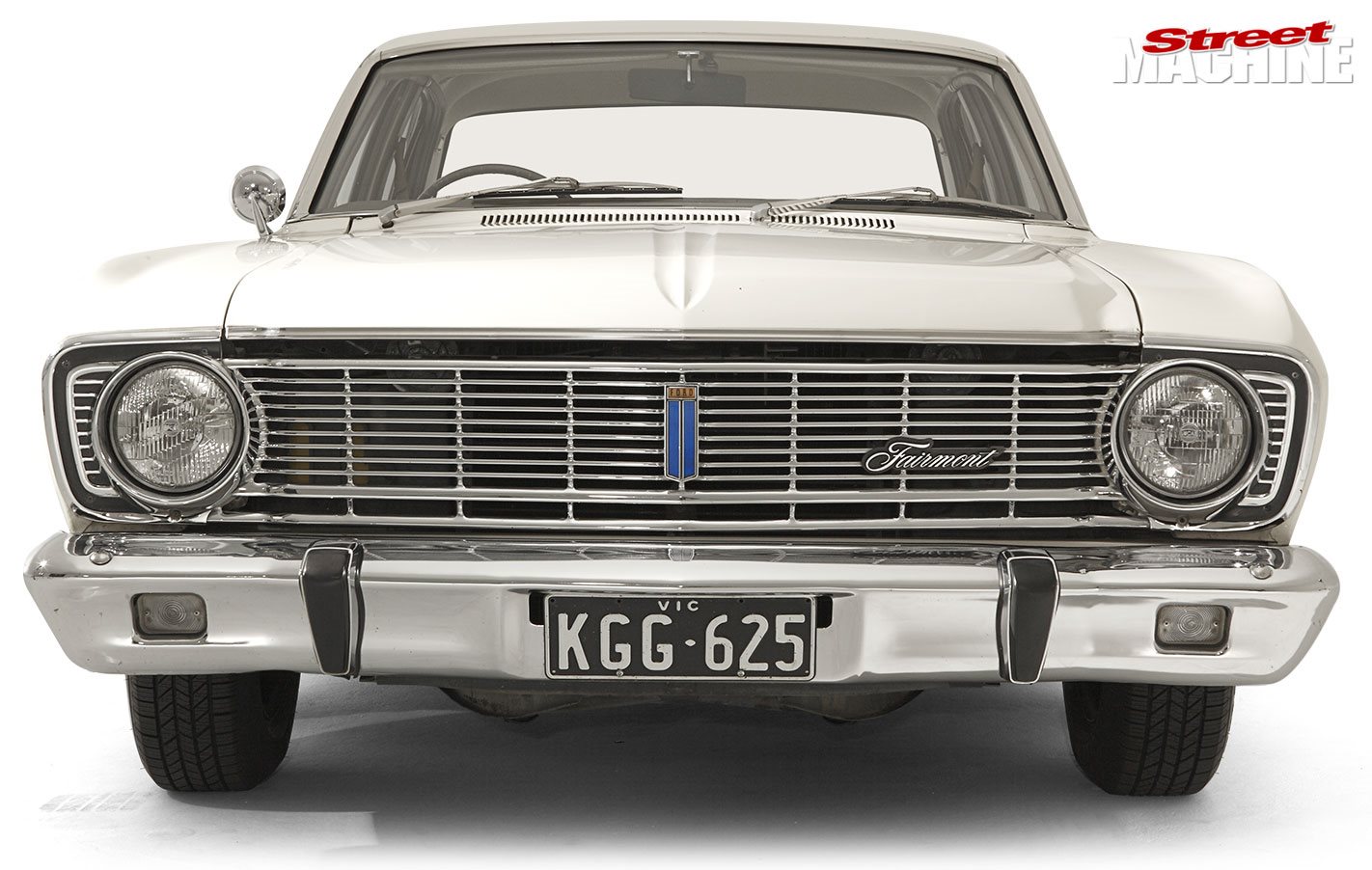 YOU can expect to pay between $20K and $30K for an XT this good. Evan Krykou is coy about the price he paid for it but he says he got a bargain.

“It’s a matching numbers car,” he says. “I phoned Ford to double check because I couldn’t believe it was a factory V8 but they confirmed it.” The 36-year-old Melbournian says he was looking around for an XR — “I’m not really into the XW or XY” — when he spotted this Polar White XT on a website. 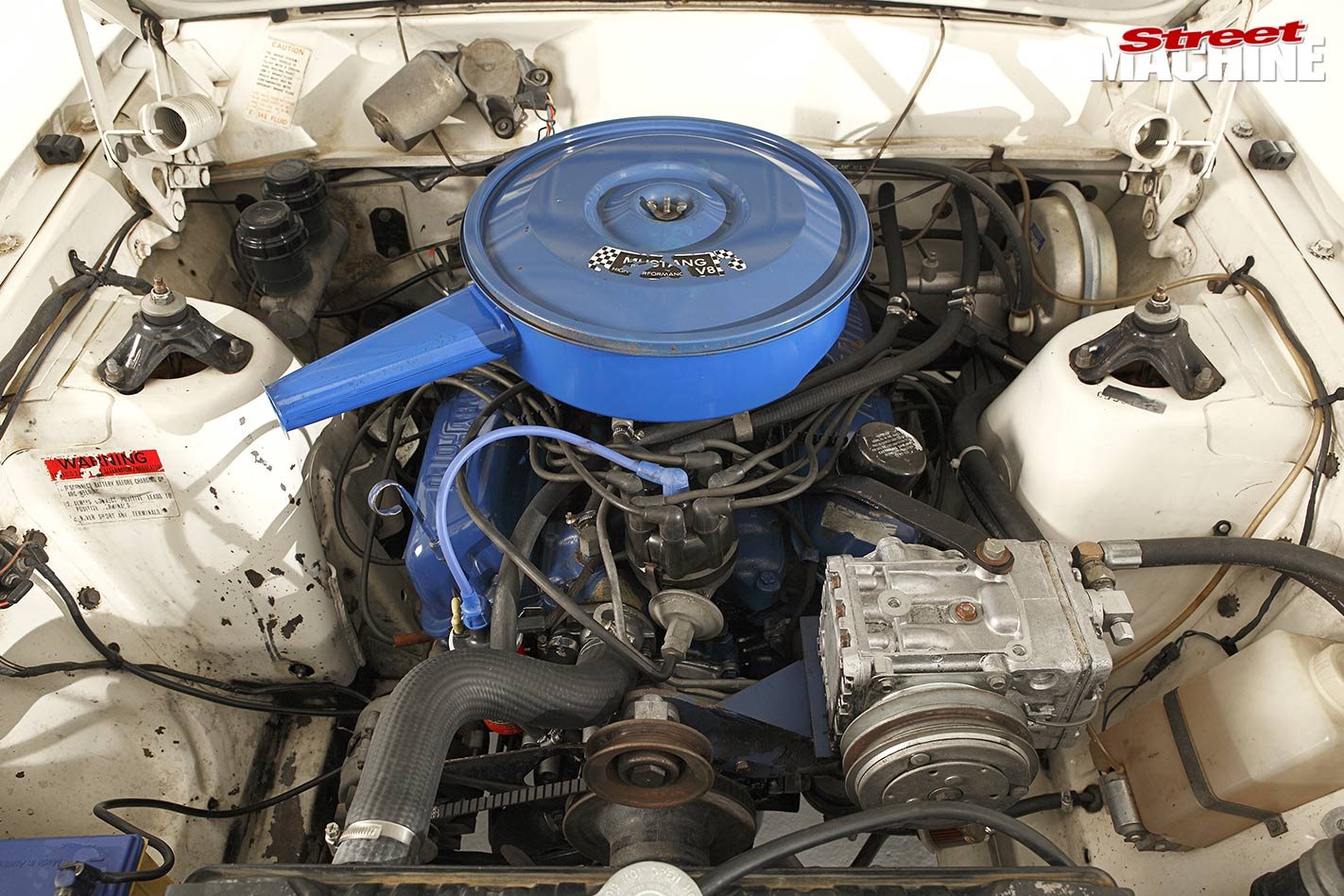 The XT saw a new range of engines on offer — 188ci and 221ci sixes, and the 210hp 302 V8. The GT version of the 302 scored a four-barrel carb and was rated at 230hp. While air conditioning was now a factory option, Evan’s XT scored it as a dealer fitment instead

The car’s mechanic had listed it on behalf of the owner, a woman whose late husband had bought it new in April 1969. “These are becoming rarer,” he says.

“Everyone’s doing mock-ups and the GTs are all in the papers, so an unmolested Falcon 500 or Fairmont of any year model is a find these days. I had a look at a couple of sixes, but a Falcon V8 is a true rarity — and it had to be a V8.” 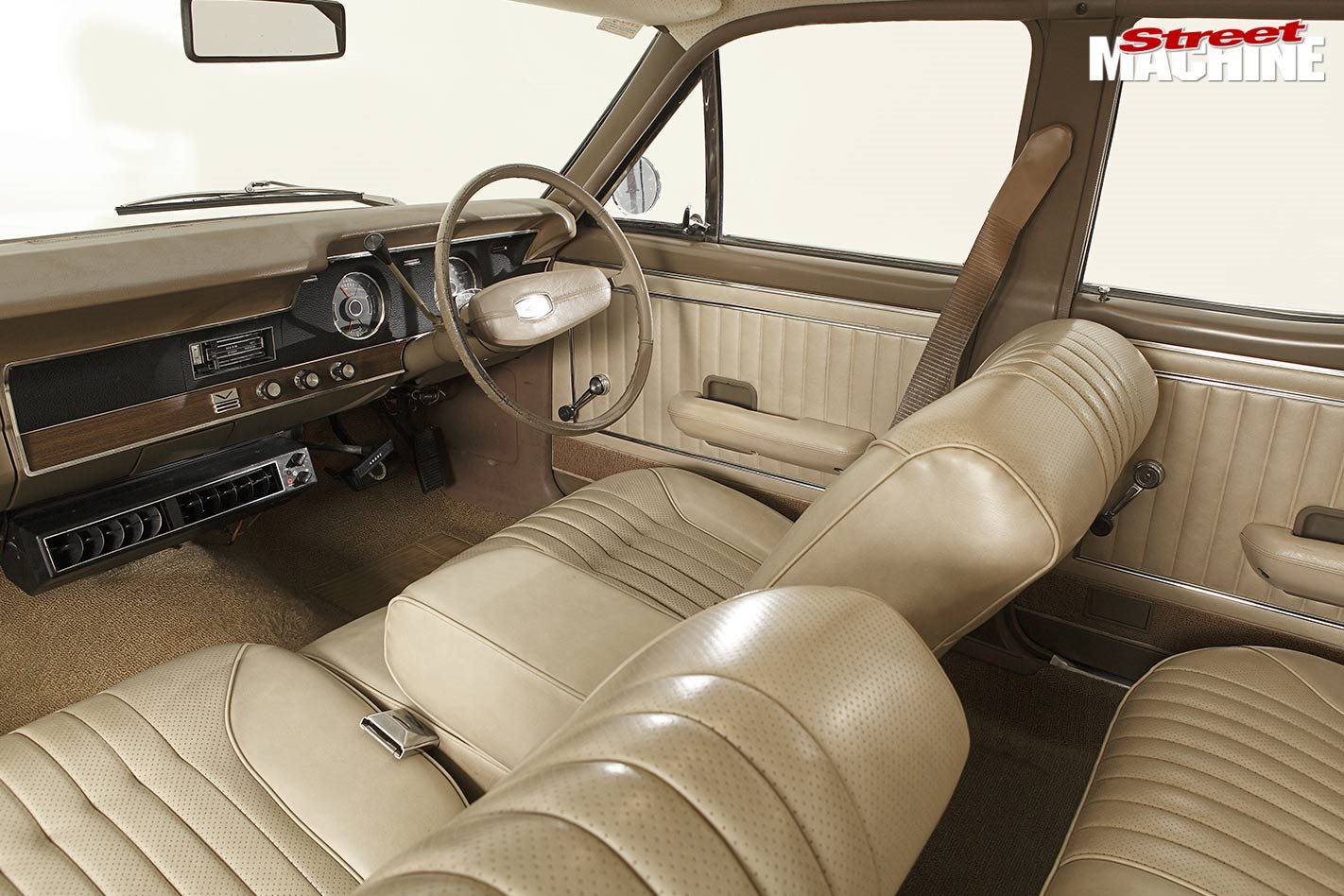 The XT Fairmont was well-appointed for the day, with a woodgrain finish on the dash, reclining bucket seats, heater/demister, carpet and courtesy lights on all doors. Small moves towards a safer interior included recessed door handles, a padded dash, and lap seatbelts in the front

A few dodgy repair jobs from minor dings are the only things Evan faults with his XT, while the only changes he made were installing carpet and a three-core radiator. 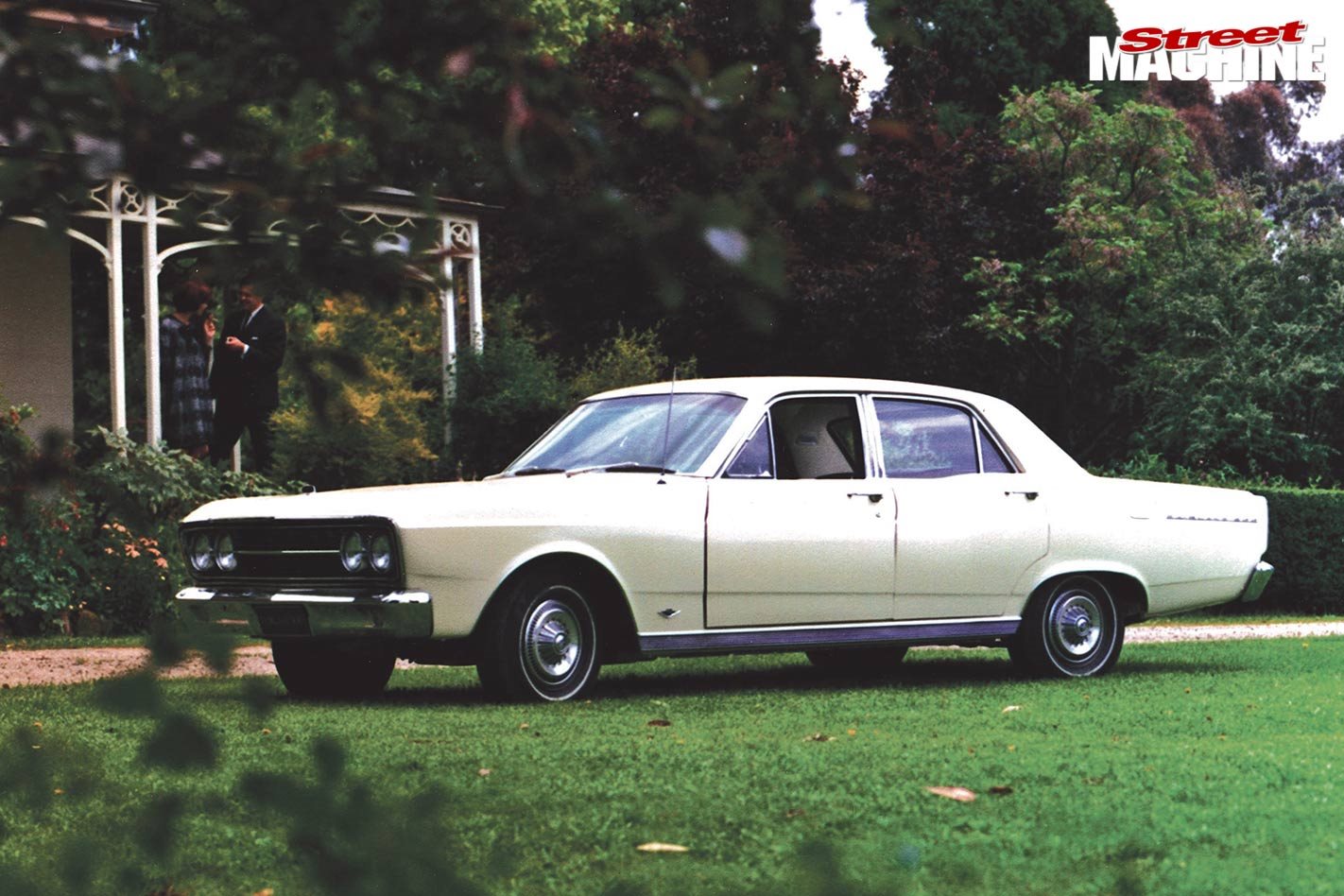 THE ZA Fairlane was the first Aussie-built luxury car and became the head-turner of the period, with its big boot and 127mm longer wheelbase. Badged ‘Fairlane’ with the 200ci six or ‘Fairlane 500’ with 289 V8 power, the 500’s standard bucket seats, power steering and power-assisted disc brakes were options on the six. Rear passengers had plenty of legroom, while the Fairlane’s front bench seat meant six adults could ride in style — real Aussie prestige and just $3435 would get you the V8. The Rambler, the other big luxo option at the time, was $4496.

The ZB (above) featured the XT’s upgraded engine specs but didn’t change externally, other than the tail-light and grille treatments. The base 3.6-litre six became the Fairlane Custom, a cheap model with a huge list of options including the 500’s V8. The ZB was a sales success; after 8814 ZAs barely kept up with demand, Ford sold 10,708 ZBs in the model’s 18-month run.