YEP, you’ve caught us out. We’ve done a Legend yarn on Norm Hardinge – he of Aussie Desert Cooler and Big Knob Racing fame – before, back in the May 2003 issue. But like his mate Rod Hadfield, Norm has an oversized store of good ideas, plenty of ambition and a voracious appetite for hard work – meaning we are well overdue for round two. This time, we brought Norm’s partner Vicki Howard into the conversation as well. As you’ll see, Vicki is an essential part of the story.

Back when we did that 2003 story, you guys were a few years into your salt racing career, but you were already dreaming about taking the Big Knob ’34 roadster to the US to race at Bonneville.

And years later, you went back and set a SCTA record in a VW?

Norm: Yeah, I met my mate Chris Mursick when he came out with Keith Turk to Lake Gairdner in 2017. I ended up going back to Bonneville that year for a look, and when Chris saw me he told me I was driving his car, a Karmann Ghia. I ran a 124mph record in Fuel class. We found out when the car was in impound that we did it with one plug lead off [laughs]. 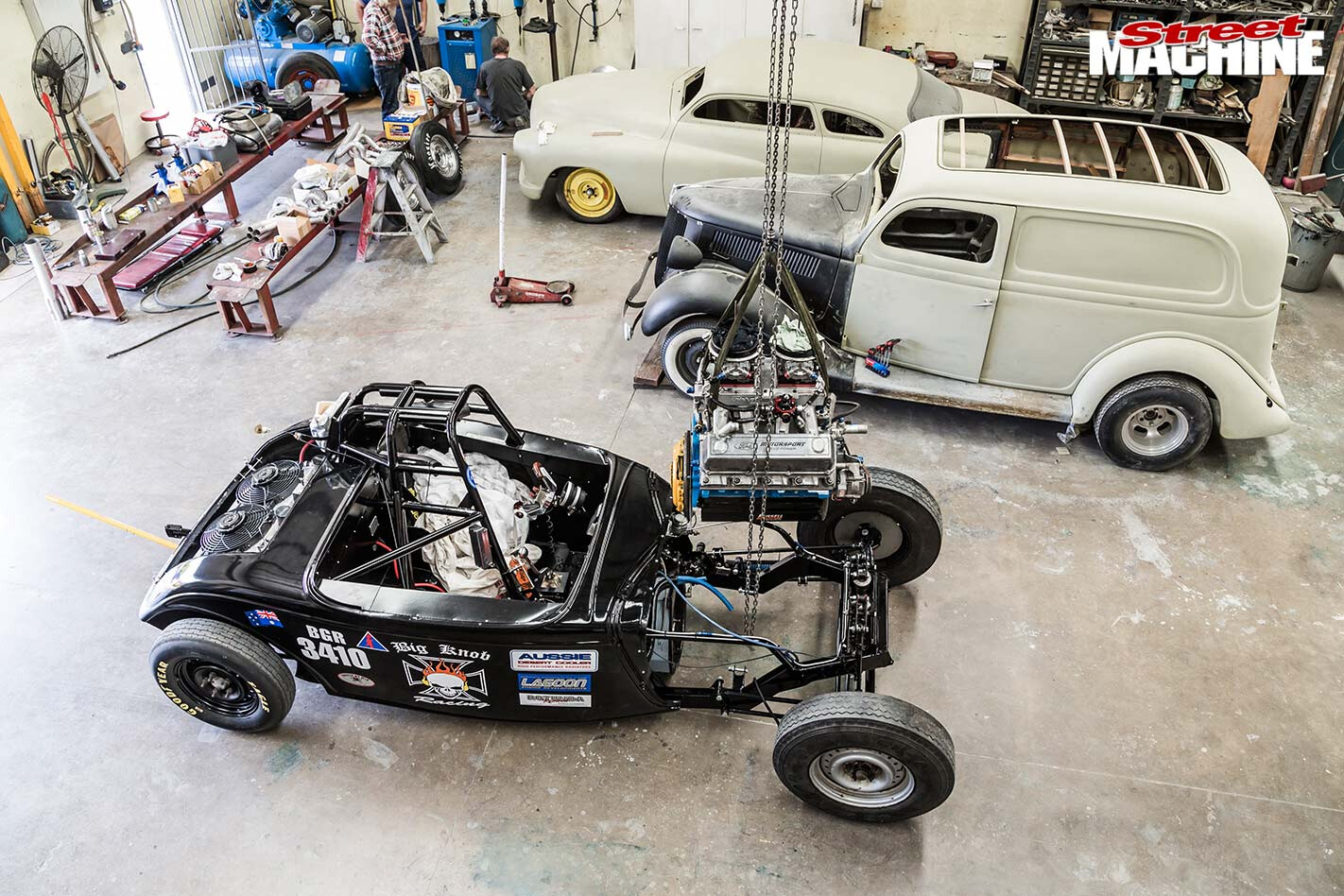 The long-suffering big-block Ford goes back into the roadster one last time, before pushing the crank out at 208mph at Lake Gairdner in 2018

What is the best the roadster has ever done, and how far has it come?

Norm: The very first year we raced it in 2000, me, Vicki and our mate Oggie drove. Vicki beat both of us with 140mph. The absolute best it has done in the following years was 212.653mph.

You’ve always had Ford big-blocks in the roadster, but we hear you’ve done the unthinkable and gone to the dark side?

Norm: Yep. I blew the Ford engine up at 208mph. I went through the quarter-mile trap and thought: “This is running so nice!” When I hit the ’chute, the engine let go and smoke started pouring out the front of the car. I thought: “That’s not good,” and hit the fire system. That put the fire out, but the steering went strange – the crank had pushed the harmonic balancer against the steering arm. It cracked the Ford Motorsport block – destroyed everything from the heads down. 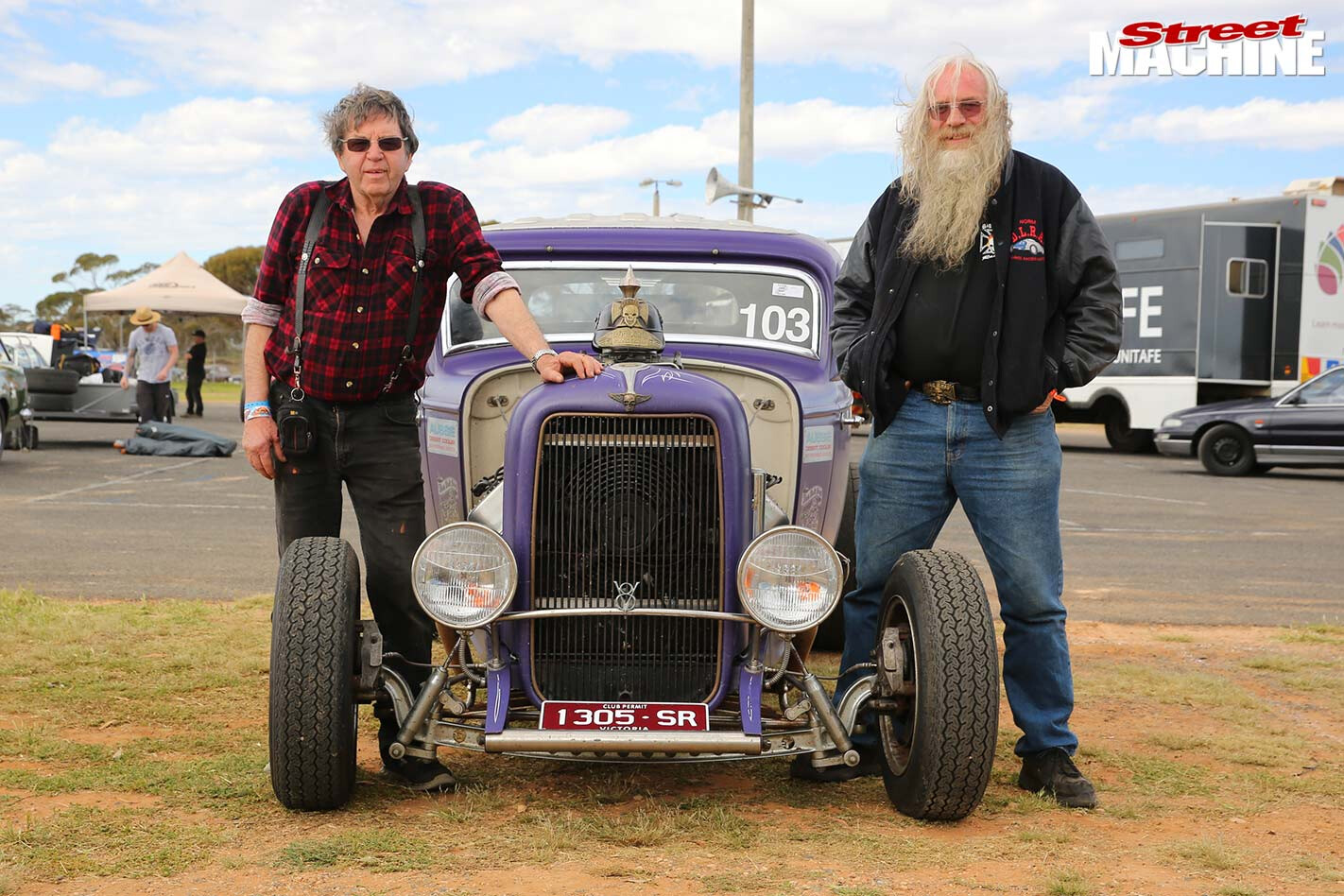 Norm and Rod Hadfield took on Drag Challenge in 2016 in Norm’s blown 392 Hemi-powered coupe. Thanks to a good pre-flight maintenance program, the coupe did DC on its ear, with a best of 11.7

Norm: When we got back home, I priced up replacing the Ford motor, but it was a big number. A mate offered me a 9000rpm Windsor for nothing, but Vicki knew I wasn’t going to really be happy with that. Then we were at Rod Hadfield’s book launch and he had a 572 crate motor sitting there for sale. It was $17K cheaper than the Ford engine, so it was an easy decision. We tuned it, set the valves and it was beaut. It ran a record at 194mph in 2019, and still has another 1000rpm in it.

2017 was a big year for Norm. Travelling to Bonneville as a spectator, he ended up setting a record in Chris Mursick’s VW Karmann Ghia

Does it hurt to have a Chev motor in it?

Norm: I like Ford bodies, but I don’t care what motor goes in. But my team guys Mat Lagoon and Neil Davis are Ford crazy. Mat is our engine guy and he didn’t know what to do. I said: “There are 17,000 reasons that Chev is in there [laughs]. We’ll probably go Ford again one day, but not while the Chev is running.”

Norm and his team ventured to Bonneville in 2009, but a blown engine put paid to plans to run 200mph on the sacred salt. They returned in 2010 and nailed 200.1mph

How long have you been in the radiator game now?

Norm: Vicki and I have had this business for 25 years, but I started in radiators when I was 16. I lived up in Inverell in northern NSW for a while, had an exhaust and muffler shop.

Norm: I got to know all the car guys through the shop and had a great time. Me and a guy named Jimmy Poole started the airport drags up there. There were illegal street drags up there that used to pull hundreds of spectators. I used to race a pretty wild EH. Then a guy got killed street racing and everyone came down hard on the illegal drags. So we put an ad in the paper and had 200 people show up to our first meeting. I went around and saw the cops, the ambulance, the council and the landholders and they were all for it. So we started it up and it ran for 20 years after I left town.

Have you dabbled in other lines of work?

Norm: I did go off and do other things and did some management courses. At one stage I worked for Smorgon Steel running a section of their steel mill. It was one of the most advanced mills in the world at the time. They advertised for someone with management experience who was also a tradesman. They had 200 applicants and 12 jobs, and I got one. It was pretty cool, and I learned a lot.

What is the biggest part of the market for you guys?

Vicki: Street machines for sure, but the 4x4 side is big now, too. The cooling systems on a lot of 4x4s are fine around town, but they fail once they hit the sand or if you start putting on big turbos. The biggest issue for us there is that the late-model stuff is complex and made to very fine tolerances.

Have you guys had to change up your workflow to deal with that?

Vicki: For sure. We bought a big CNC router/cutter years ago, so we started using the SolidWorks design and engineering software to program the machine. We could see that 3D would get us ready for the future and make it easier to develop new products.

Vicki: I’ve got a physics degree and I love computers, so to me working on our 3D design set-up is fun. The whole team enjoys the challenge of designing new products and custom one-off jobs. I’ve done a lot of work with Photoshop and video editing software, but SolidWorks is next-level. We figure out the fundamental principles at work in those design programs – what the authors were thinking. Then when we need to do something special, we have a good idea of how to go about it. I think if you learn things from the ground up, your understanding is better. And if it takes you three months to figure something out, you’re not going to forget it [laughs].

It must save time on the shop floor.

Vicki: Yep, these days we can scan any piece we want and modify it in SolidWorks. It used to take three days to set up a jig to build a radiator for a late-model car. Now we can do it in half an hour and there is no human error. It is like physically building it in the workshop, and you know it is going to be perfect when the job is done for real.

How has the COVID shutdown affected you?

Norm: Normally, we do 19 shows a year with a trade stand, plus we help run the Cranksters Nagambie Cruise each year and go to the salt. And we go to a bunch of other events; last year we went to Mooneyes in Yokohama, which we loved. But now all that is off, I’ve got a bit of time to finish some projects off.

Norm: I’m very close to finishing my FJ ute. It’s got a twin-turbo L67 in it, and will be great for Drag Challenge. And I’m also working on a ’32 Ford roadster with an LS1 and six-speed.

Norm: Yeah! I love my Hemi coupe and V12 coupe, but they take a bit of care and looking after. The Hemi coupe did Drag Challenge on its ear, but requiraed a maintenance job on it beforehand. With the LS roadster, we’ll be able to jump in and go.