IT’S ONE of the toughest motorsport events in the world, but Hot Rod Drag Week is also one of the most publicised. Which explains why Australian Harry Haig made such a big bang at last year’s event, when he dragged an old big-block four-speed ’69 Chevelle out of a field to use on the five-day, 1000-mile odyssey.

But he wanted to go even bigger this year, with a built big-block and a pair of snails hanging in the breeze. Given the amount of publicity Harry and team received at Drag Week 2016, we’d say mission accomplished! 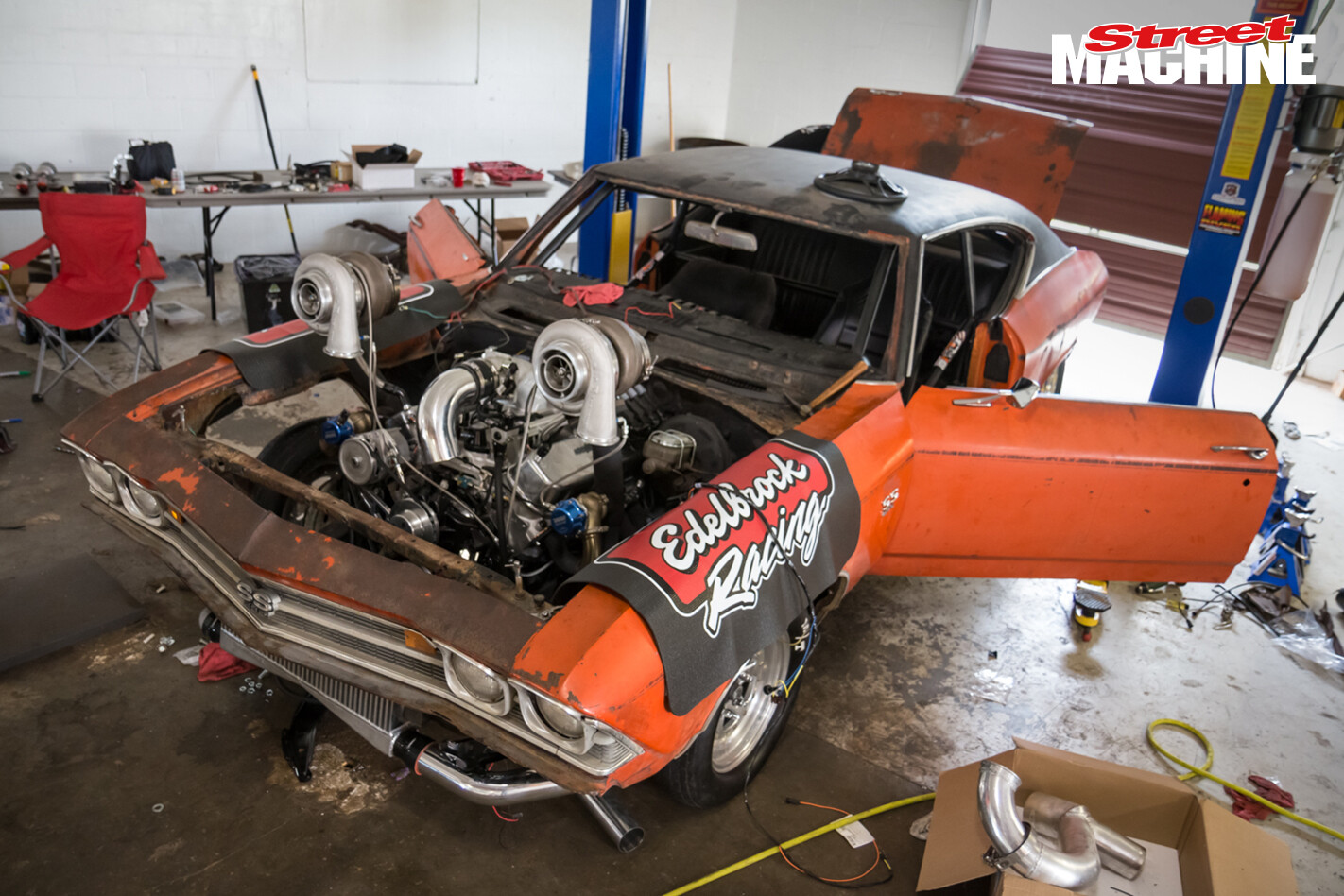 Drag Week is no joke though; to build something that’s gonna go fast and is going to last, you want to use the right people if you plan on being there at the end. With that in mind, Harry tapped Paramount Performance’s Terry Seng on the shoulder to help out with a new big-block combo for the Drag Week Chevelle.

“Getting the engine built up north [Paramount is situated in Toowoomba, Queensland] made sense because Terry is a great mate and he was coming with me to the US,” Harry says. “Plus Robby Abbott’s engine machining is some of the best I’ve seen. I told Terry he can build the engine and if it shits itself he’ll be paying the bar tab every day in the States. Terry said: ‘I’ll take that bet.’” Parts selection was easy; start with a Dart Big M block and then fill it full of good stuff like a forged Eagle crank and Scat rods with JE pistons. For the top end the boys gave Edelbrock the nod and fitted the engine with a pair of complete Edelbrock Victor CNC heads and a Victor Jr EFI intake. But the real stars of the show were the 72mm BorgWarner turbos the boys wanted to hang out the bonnet. With the Chevelle waiting for a transplant in the US, the plan was to fly over a week ahead of time and build the whole car before the big event, so to avoid possible clearance issues they decided to position the turbos high. As it turned out, they positioned the turbos very high indeed, but that just added to the car’s awesomeness when the team fronted up at Drag Week registration.

On the dyno at Tremaniac Racing in Brisbane, the big-block reeled off an easy 1300hp on E85 at around 14psi boost before it was packaged up and put on a plane to the USA. “We wanted something that would be easy on the valvetrain and make reliable horsepower, as well as drive thousands of miles,” Terry says. “I reckon we nailed it. The only other thing I would have liked to do was more testing in the car before we headed to Drag Week.” At King Hotrod & Restoration in Leavenworth, Kansas, the boys spent a full week of days and nights mating the Chevelle with its new driveline. Things were so tight at the end that they only had time to drive it out of the workshop, take a couple of photos and put it on a trailer to head to Drag Week. How did they go? 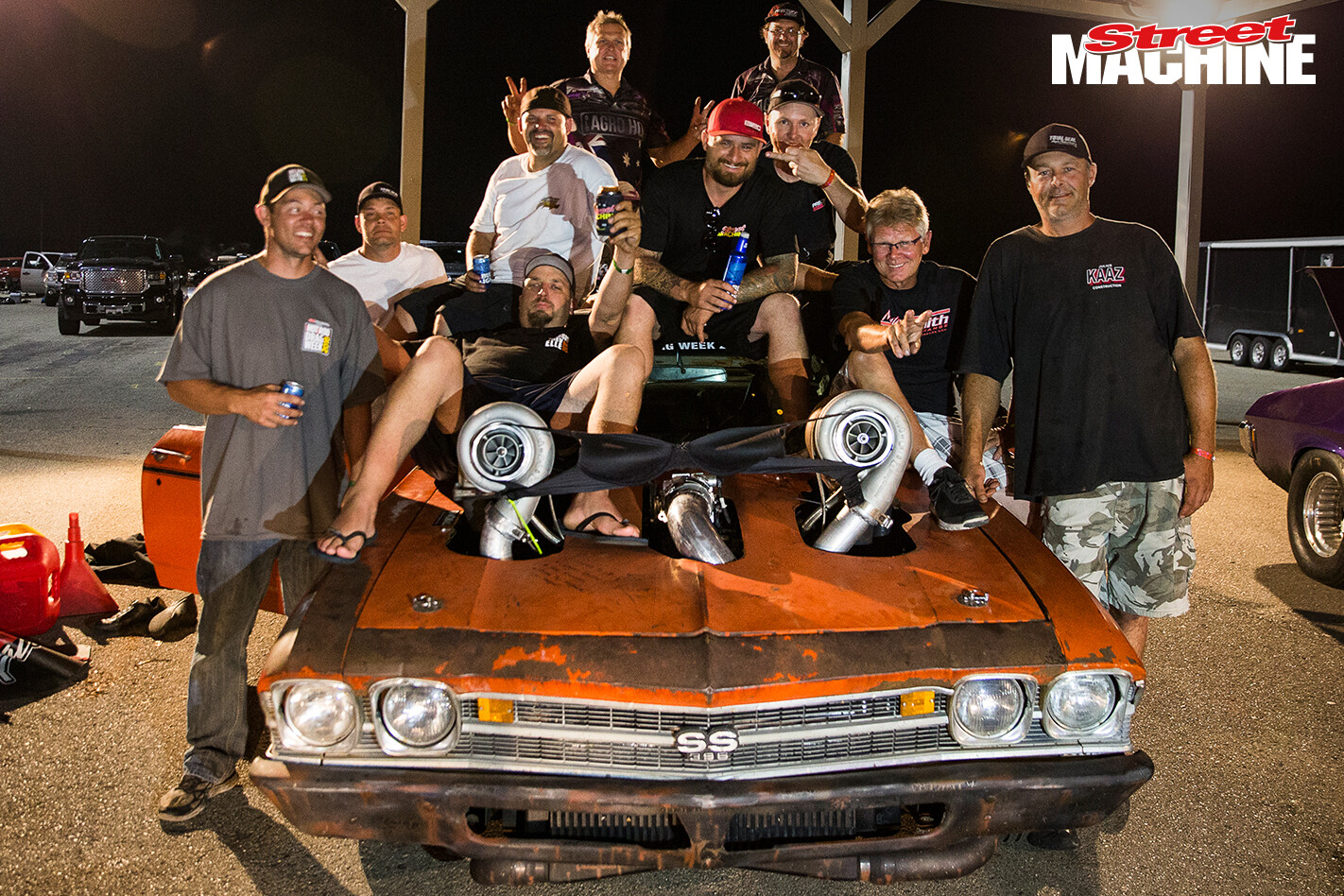 How does an average ET of 8.95 with a PB of 8.77 @ 159mph sound? That’s pretty damn good considering the car had barely done a lap around the block before rocking up at Drag Week 2016. On registration day they were still wiring up the fuel pumps.

It was a hell of an adventure and we were following along with cameras from the very beginning to document the madness. So sit back and watch as Harry, Terry, Shannon and Ryan take on one of the toughest car events in the world with their Aussie Chevelle.

There’s already talk of having another crack next year with the crusty Chevelle, but that’ll have to wait for another time.