CHARGING around Sydney Motorsport Park at speeds well in excess of highway limits while leaving bushfires in your wake is a great way to spend your weekend. We know this because we bludged a ride in Daniel Souvleris’s KRANKI HJ ute at Powercruise 66, and with over 1700hp worth of 14/71-blown, 572ci big-block on board, it was a truly life-affirming experience. It is this very kind of four-wheeled tomfoolery for which Powercruise is so widely revered. It’s touted as the event where you can do all the things you’re not allowed to do anywhere else, and it ain’t far from the truth. The Powercruise concept is often imitated but perhaps never quite equalled, and the franchise has grown to become a juggernaut of the Aussie car scene. With 66 successful shows in the can as well as countless one-day Powerplay events, there is a reason that pit garages sell out 12 months in advance. Put simply, Powercruise gives the punters what they want – the opportunity to race, cruise and generally beat up on their cars for three days straight. Powercruise 66 was a particularly multifaceted affair. On top of the usual offering, which included cruising, burnouts, off-street racing, powerskids, a dyno comp and a show ’n’ shine, there was the also the Lights Out event and a new concept, the Team Gup/Team Mackley 20-versus-20 burnout showdown, both held across the road at Sydney Dragway. Lights Out went down on the Friday night, and was all about balls-out, heads-up, run-what-ya-brung eighth-mile action. The only real rules are that your car must be properly quick and have swinging doors, and if you ticked those two boxes you were welcome to turn up and pick an opponent to shape up against. The first car past the post wins, so it’s a refreshingly pure form of drag racing. It all played out in a street-style environment with a pro-tree start and no times displayed, and a few cheeky side bets may or may not have occurred. There were some real toughies on hand, including Jeremy Martin’s Pro Line-powered VB Commodore, Tomi Raikko’s mental six-second Torana, Dave Murphy’s killer Falcon, and the nitrous-choofing Toranas of Johnny Habib and Simon Kryger to name but a few, making for some exciting racing. The heads-up action continued back over at Sydney Motorsport Park the following day, with the $5000, winner-takes-all Street Outlaws racing on the main straight. The no-prep surface and cool, damp conditions favoured the all-wheel-drive import brigade, and the smart money was on the JUN II and ARSONL Skyline GT-Rs, both of which looked stonkingly quick early in the elimination rounds. But along the way Godzilla tripped and fell, and we were treated to a good old-fashioned all-V8 Holden-versus-Ford final. 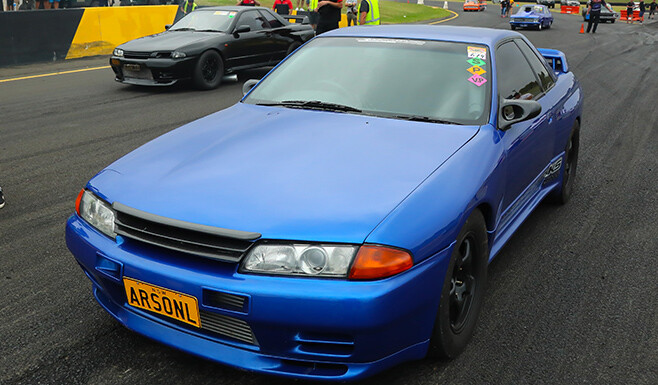 David Murphy’s wild Murphy’s Law Falcon squared off against Mark Hayes’s head-kicking 763ci Torana for the five grand. Both are nitrous cars, but David and Mark didn’t fire up the giggle gas this time around to help with traction. What transpired was one of the most contentious finals in Powercruise history!

Murphy left on Hayes, and while some suggested that he buggered off early – even the starter indicated it may have been the case – officials carefully scrutinised a slow-motion replay after the race and ruled that he cut a near-perfect light. But the real controversy occurred when Murphy’s Law broke loose mid-track and crossed into Hayes’s lane, with Mark lifting as a result. Both men returned to the startline to argue their case, and words were exchanged. In the absence of a clearly defined centreline, officials awarded the cash to Murphy. He offered to re-run the final for the benefit of the crowd, but not for the five grand. Hayes declined, and both racers shook hands and went their separate ways. That evening saw the crowd again cross the street to Sydney Dragway for the inaugural 20-versus-20 burnout challenge. Much was made of this element of the program in the lead-up to the event, and a great deal of online smack talk took place. As a result, a solid crowd showed up to watch a team handpicked by Powercruise promoter Michael ‘Gup’ Gilbert take on a 20-man army of skidders belonging to Aaron Mackley. With names like Lynchy, Mick Brasher, Dave Pendlebury, Mark Schwarz and Dom Luci in the line-up, we were assured of a first-class smoke show, and did not go away disappointed. Rain disrupted play after 14 of the 20 scheduled burnout battles, and with seven wins apiece, Team Gup was declared the winner on a countback. Another controversial result! 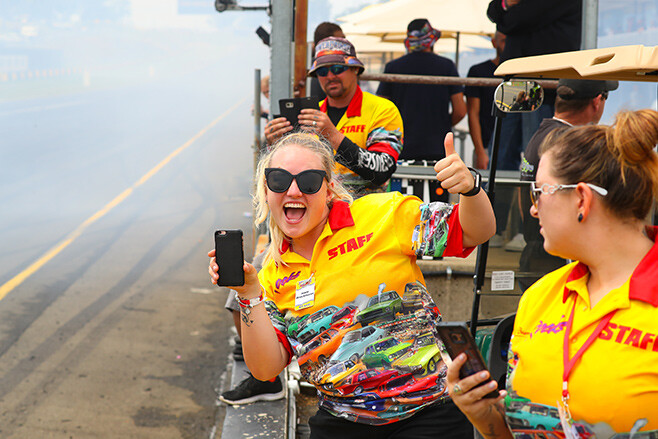 These were the highlights of an action-packed Powercruise program, but for all the entrants who got their kicks from competing in the various events, there were just as many who went along just to do laps in the cruise sessions and belt tyres with their mates. Powercruise has always been an event with broad appeal, where you can do as much or as little as you like, and go home happy. 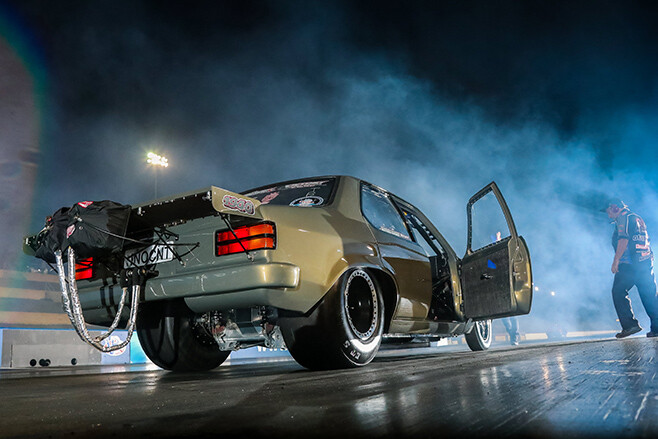 1. Simon Kryger is planning to up the ante in the ex-Heath Doherty Torana, replacing the 632-cuber for something even bigger! 2. Trent Smith brought a knife to a gunfight way back at Powercruise 12 and still managed to set a world powerskid record with what was a very basic little 308-based combo in his LX hatch. Needless to say, the car has been upgraded in recent years, and Trent again won the powerskid comp at Powercruise 66 3. John Habib’s nitrous big-block Torana with the wheels well and truly off the deck at Lights Out on the Friday evening 4. Mark Schwarz provided the halftime entertainment at Powercruise 66, skilfully drifting Turn One in reverse in his HANFUL Monaro and continuing up the main straight with the tyres ablaze, complete with high-speed tip-ins. The bloke is a deadset freak with a steering wheel 5. Our ride in KRANKI was a deeply spiritual experience. With 1700hp on tap, it simultaneously melted the tyres and flung itself towards the horizon 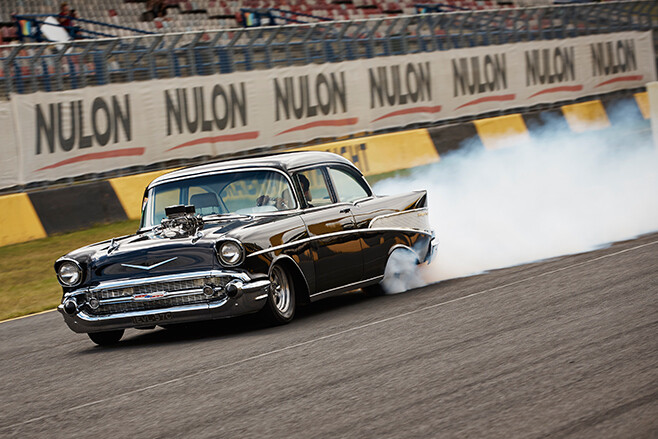 6. Spotto a blown ’57 two-door! Brendan Buhagiar is in no way kind to his gorgeous ’57 Chev 7. It is always a treat to see Mark Hayes’s 763ci LC Torana race, and he was unlucky not to take the win in Street Outlaws 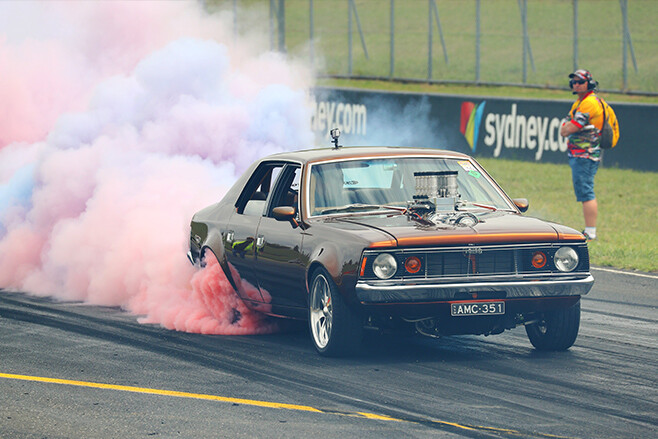 8. Cleaning up Top Judged in the street-class show ’n’ shine, Michael Brown’s Rambler Hornet was looking positively stunning. That didn’t stop him from getting up it for the rent in the cruise sessions and other events 9. One of the best things about the Street Outlaws side of Powercruise is seeing something like Tomi Raikko’s 200mph twin-turbo LJ Torana trying to get traction on the
unprepared track surface 10. Perennial crowd favourite Mick Brasher never fails to put on a show. On top of the regular Aussie flag and inflatable hand he usually hangs out the window of the Corolla during a skid, his right leg even got in on the action at Powercruise 66 12. James Crnojlovic and his blown Gemini are no fans of the Environmental Protection Agency, and we’re pretty sure the feeling is mutual 13. Todd Kopelke’s tunnel-rammed LJ coupe filled the air with red smoke and impressed the judges enough for Runner-Up in the eight-cylinder class in the skid comp 14. Justin ‘DUFMAN’ Duff brought the noise in the burnout comp as well as the 20-versus-20 showdown, and ended up with 3rd in the eight-cylinder class against plenty of blown cars 15. After putting on a stellar performance in the 20-versus-20 burnout challenge and winning the Top Judged Burnout eight-cylinder class, as well as Lord Of The Revs in the regular burnout comp, Michael Pratten continued to beat up on his blown VX Commodore in the Powerskids on Sunday 16. Lynchy’s tip-in was one for the books – from one corner of the massive Sydney Dragway pad to the diagonal opposite, with the engine parked firmly on the limiter the whole way