WHILE LS-powered VTII-VZ Holdens are possibly the cheapest they’ll ever be, I reckon the VE-generation cars are the best buy if you’re in the market for a project car.

Launched in July 2006, the VE Commodore was a whole new platform that radically dragged the old and tired Commodore into the 21st Century. It is rumoured we were meant to get the VE much earlier, as design sketches that look close to the production vehicle date back as far as 1999! Unfortunately, we had to wait seven years for the biggest redesign of the Commodore platform since its introduction in 1978 (though people wanting the new ute or flash-looking Sportwagon had to wait ’til August 2007!).

The VE was based on the Zeta platform, which GM-H spent four years and $1 billion developing. Unlike previous Commodores, it contained no Opel DNA

It was worth the wait, thanks to the improved quality of the ride, handling, cabin noise, fit and finish, and performance of the all-new locally developed chassis package, coded Zeta, which cost over $1 billion to develop. Replacing the badly outdated semi-trailing-arm rear end was a new platform featuring a double-pivot MacPherson strut front end and a four-link independent rear. The quality was such that it would go on to underpin the fifth-generation Camaro.

Simply put, the VE rode, drove and performed like a much more expensive premium German import, and it has become one of the best buys in the second-hand market for people wanting a great car with the bones to be made into a stonking street machine.

GM-H allocated models into three broad categories for the VE series: Base (Omega), Performance (SV6, SS, SS-V), and Luxury (Berlina, Calais, Calais V). This was streamlined to just Performance and Luxury trims in 2011, with the Omega moved into the Luxury class.

Holden sold nearly 350,000 Commodores between the VE’s introduction and the 2013 launch of the VF model. While plenty of them include examples missing two cylinders, we’ll focus on models that came sporting an absolute pearler of an engine under the bonnet – the Gen IV small-block V8.

Transmission options for V8 models had six forward gears for both manual and auto for the first time in a Commodore, with the GM 6L80E electronic six-slot auto getting the nod for punters who wanted a self-shifting transmission. Tremec’s T56 six-speed remained the manual gearbox for V8 Holdens, though HSVs did score the much-improved TR6060 model from the E2 model update starting in November 2008.

MOREHistory of the Holden Commodore: VE-VF

Manual clutches have a dual-mass flywheel to damp vibrations, while the VE had diff ratios that ranged from 2.92 (Calais V8 auto), 3.27 (HSV auto), 3.45 (Calais, SS, SS-V manual), and up to 3.7 (HSV manual). Along with the new IRS rear end, the diff centre was upgraded to a more modern unit from the outdated M80 Eaton unit used in the VT-VZ-generation Commodores.

Nearly all V8 VE Commodores were well-equipped from the factory with power windows, cruise control, air conditioning (many up-spec cars had dual-zone climate control), while the optional leather trim was far nicer than previous models. Early SS and SS-V dashboards could be ordered in some truly horrible colour combinations, and it was well received when Holden went back to plain black interiors in later updates.

Holden updated the VE-generation through its seven-year life, but rather than releasing different model codes to differentiate the updates (as with VT, VX and VY), model-year designations were used instead. The first major update was known as MY09.5 for the 2009 model year, followed by an MY10 update for 2010 models. Holden then marketed the substantial MY11 model update as the ‘Series II’, and, confusingly, retained the VE Series II moniker for the MY12 updates launched in September 2011.

Many of the updates were minor cosmetic touches, but there were a few key changes through the VE’s history that can make a quantifiable difference when it comes to buying a potential project car.

The MY9.5 refresh saw the V8 dropped in the Berlina range, while MY11 Series II saw the introduction of a modern infotainment system by Siemens VDO, dubbed ‘Holden-iQ’.

The 6.5-inch touchscreen also saw the vents and console comprehensively updated to a far more modern style, which is a fact to take into consideration if the VE you want to buy is intended as a daily driver. Higher-spec models also had their satellite navigation upgraded to include speed camera locations, traffic alerts and more.

It’s also worth noting the MY10 update brought some fettling of the suspension set-up, and included a larger 24mm rear sway-bar, plus an extra ball joint in the rear suspension that had first been seen on the Sportwagon. This was claimed to improve handling and chassis control on Performance models wearing 18- or 19-inch wheels.

MY11 saw the introduction of E85-capable ‘Flex-Fuel’ technology in the V8s, which is handy to note if you’re planning on strapping a blower or turbo to the VE project car you’re no doubt about to rush out and buy once you’ve finish reading this article.

The MY11 update also introduced the Redline option for V-series cars, offering several cosmetic upgrades as well as lightweight forged 19-inch wheels off the Pontiac G8 GXP, stiffer FE3 suspension and four-piston Brembo brakes. The Redline package was further updated for MY12 to include redesigned wheels, and red paint for the Brembo brakes, while Redline Sportwagons and utes were added to the list of variants sporting FE3.

An important note for street machiners relates to VE wheels. While pretty much all pre-VE Commodores can swap wheels between generations, Holden changed to a smaller 69.9mm centre bore diameter, down from the previous 72mm bore. They also chose to upgrade the wheel studs from 12mm to 14mm items. So don’t count on fitting the wheels off your earlier Commodore to any VE, or vice-versa.

What goes wrong? Not much more than many other late-model cars, though the big one to take note of is Active Fuel Management (AFM) lifter failure in L76s and L77s. In very basic terms, AFM, also known as Displacement On Demand (DOD), would drop cylinders to save fuel; however, the hydraulic lifters used in AFM-equipped engines often fail, indicated by a faint squeak from the engine on cold start that goes away as the motor heats up.

If you get onto it early you can fix the issue with a new cam, lifters, lifter buckets, pushrods and valve springs, as we detailed in LSX Tuner #4. Otherwise, you’ll have to do a full rebuild on the engine, including pistons, rods and crankshaft!

Apart from that, most other issues will come down to a lack of servicing or not replacing worn-out parts. Most VEs should be on their second set of shock absorbers and clutch by now. Failures of the plastic radiator end tanks aren’t uncommon, so don’t be surprised if your car has had a new radiator thrown in it.

Common sense should tell you to buy the highest-spec car with a full service history and as low mileage as possible, and to inspect thoroughly for signs of repaired crash damage. Thanks to the VE’s long production run and wide number of models offered, there is a staggering number of cars for sale at any given time.

Depending on what you want to do to your car, you can find VE rolling shells for as little as $2000 on online trading sites like Gumtree, or a neat high-kilometre VE SS sedan for $5000-$8000. If you really want to bargain-hunt, you could buy the closely related WM long-wheelbase-series Statesman or Caprice for anywhere from $3000 for a high-mileage LPG ex-taxi up to $15,000 for an old bloke’s pride and joy with bugger-all kays on it.

For those wanting a grunty V8 that can double as a reliable kid-friendly family car, it’s possible to find really good VE SS-Vs around the $15,000 mark, though wagons and utes can push this up as they’re more desirable.

Whatever VE model you pick, so long as you buy an example in good nick, you’ll have a hard time not loving it. 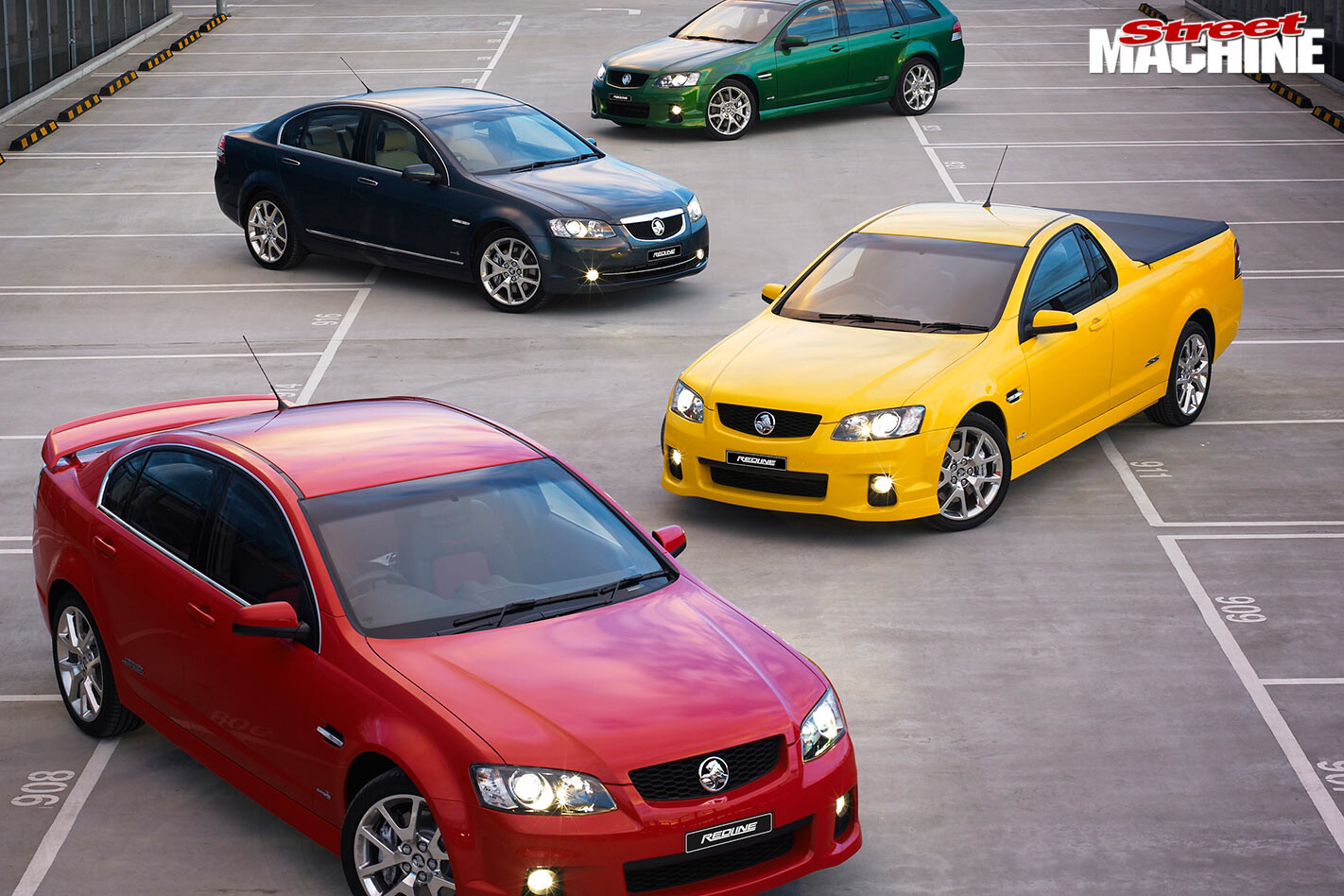