Sharply priced projects are getting increasingly harder to come by, especially if you don't know what to watch our for when hunting down the ride of your dreams. Here's our guide on what to look for and what to avoid when shopping for a Holden Monaro CV8.

THE WAY the modern Holden Monaro came about is a story that sure as hell doesn’t need telling again. But just in case you’ve been under a rock since the turn of the century, the basic design was the result of a handful of Holden workers back in the late 90s who gave up beer and footy time to stay after hours and sketch up a two-door version of the then-current VT Commodore. 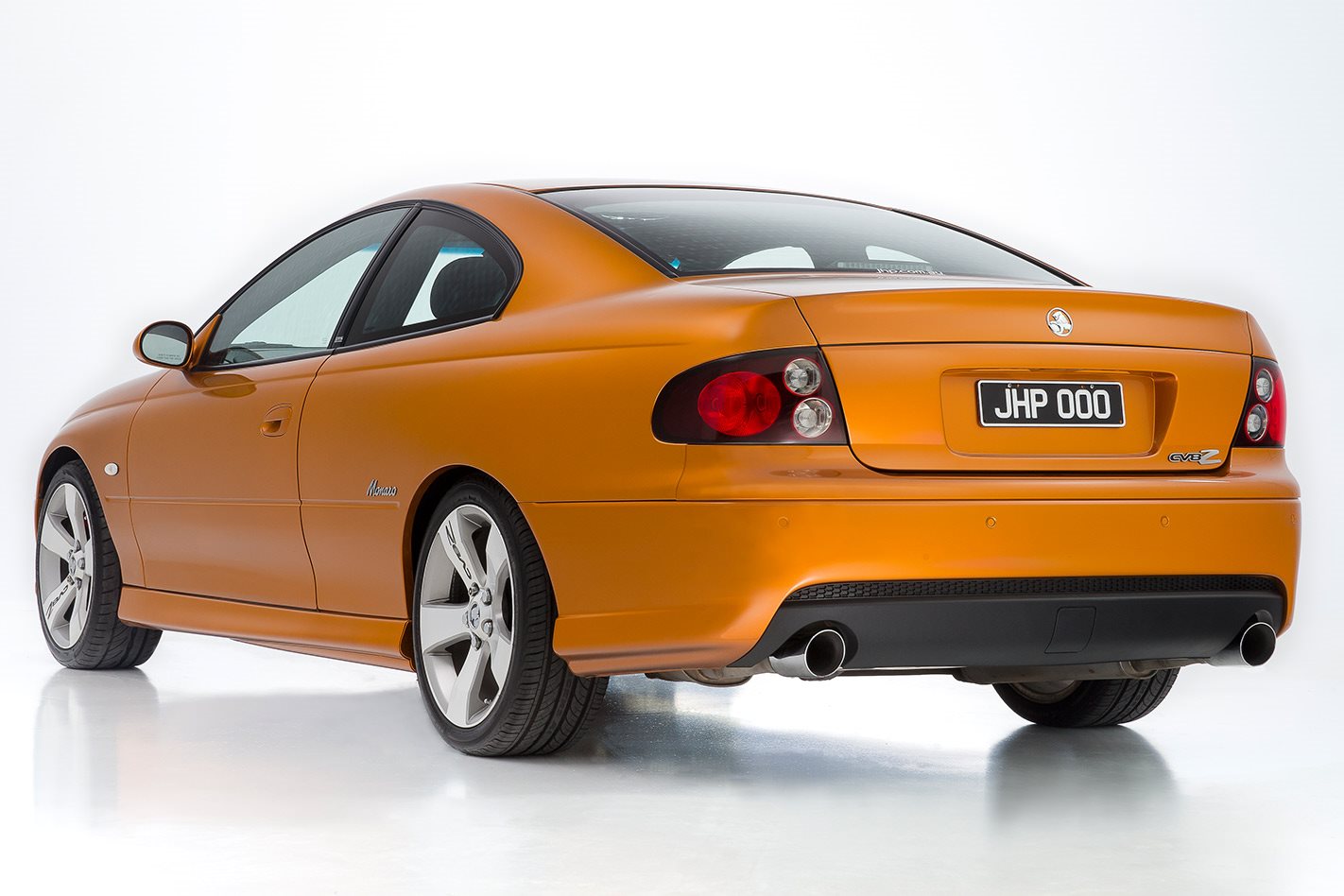 Holden chief stylist, Mike Simcoe, was in on it, but the GM brass were deliberately left out of the picture. Thing was, when Simcoe and the lads stepped back to look at the finished article, it was so damn sexy, they just knew it had to be smuggled onto the Holden stand at the 1998 Sydney Motor Show. So Cinderella did go to the ball, and she blew away everything else on four wheels.

Even though the concept car was news to Holden’s high-ups, it was clear they had to build it, or they’d risk a riot from the punters who’d clapped eyes on it in Sydney and had come over all fidgety and reaching for their chequebooks. Equally obviously, it just had to be called Monaro. 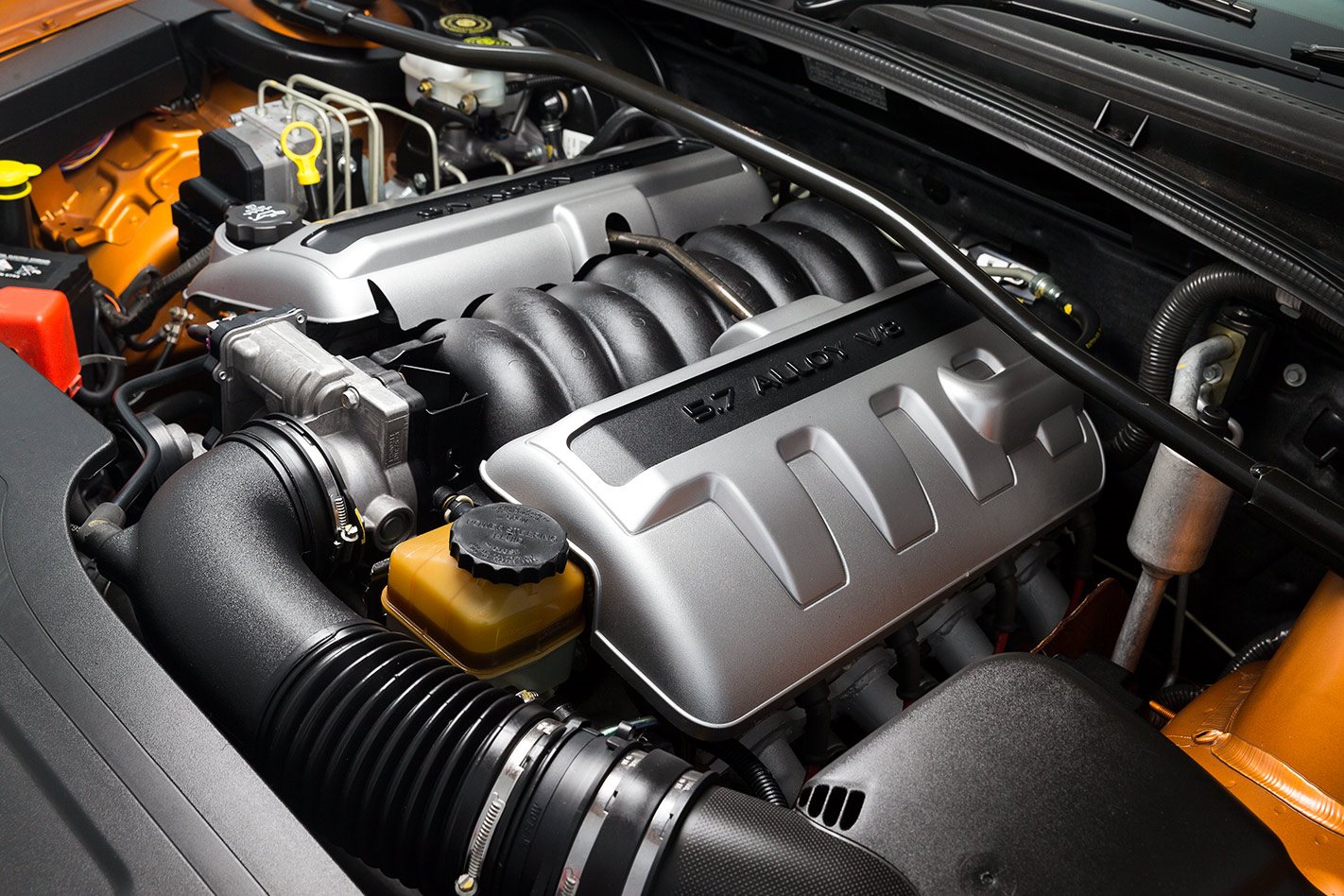 Even if you’re not a Holden fan, you can’t ignore that this is one sweet-looking full-sized coupe. The proportions were bang on the money and with proven Commodore mechanicals, not even the early LS1’s reputation for rattling and burning oil could slow it down. Hell, it even managed the equivalent of selling coal to Newcastle by being offered for sale Stateside in left-hook form, badged as a Pontiac GTO. 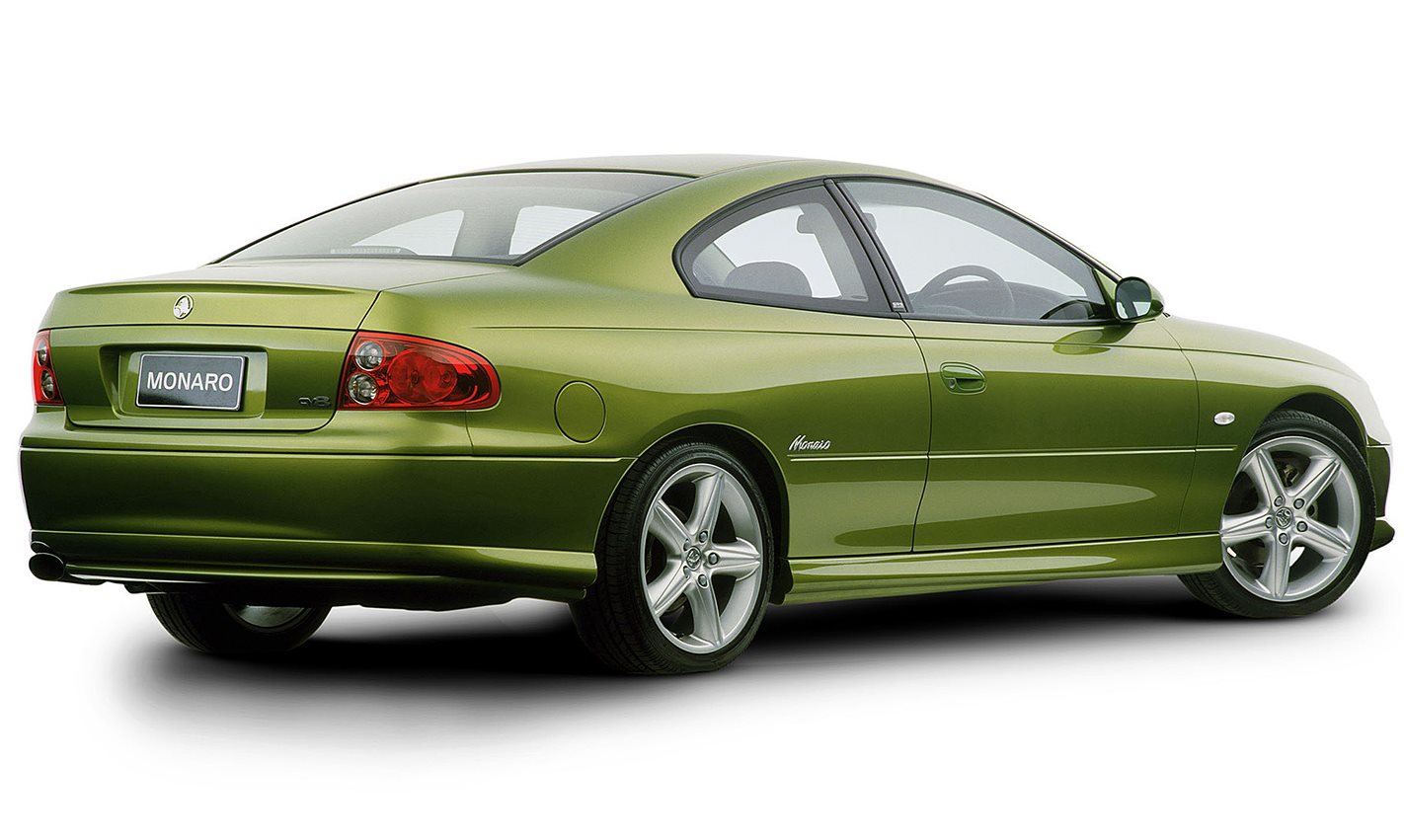 The first production CV8s hit the market in Oz in late 2001, along with a model called the CV6 which, instead of the LS1 V8, got the supercharged 3.8-litre V6 and no gearbox choices – just the four-speed auto. But the 225kW V8 outsold the V6 by about 10 to one (no surprises there), so Holden dropped the CV6 after less than two years.

These first Monaros were a bit more subtle-looking than later ones, with just a dual-tip exhaust system exiting on the left-hand side at the rear, rather than the bazooka exhausts of later versions. Eighteen-inch alloys first seen on some HSV models were standard. 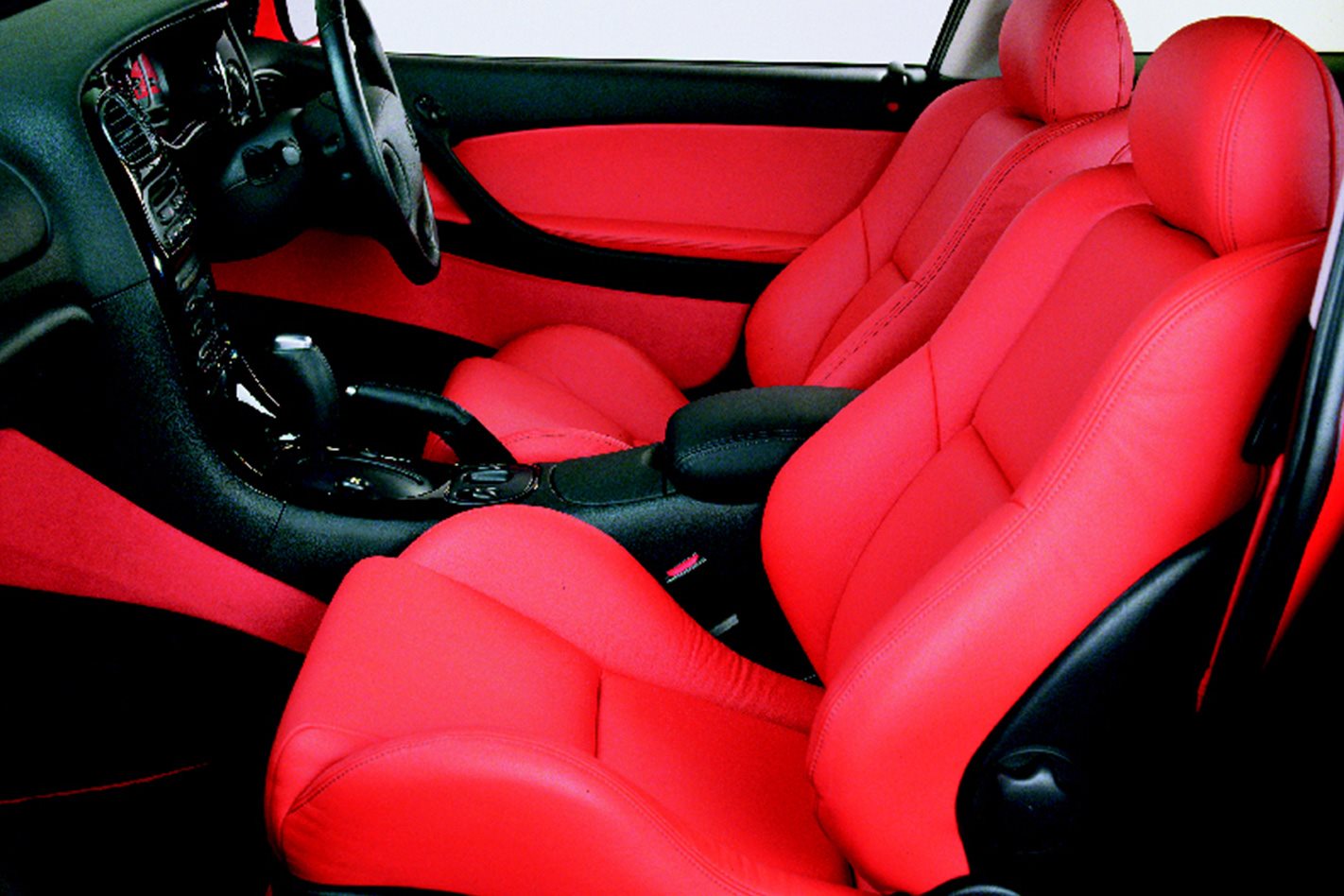 The biggest let-down for many was the VX Commodore dashboard, which, even with colour-coded dials and lots of piano-black, wasn’t sexy enough. Many were sold with a dealer-fitted rear spoiler (which Simcoe hated), which served only to prematurely slaughter the bootlid struts and make the whole thing fall on your head.

The trim was ritzy with full leather (although some of the colour combos are a bit shouty these days) and electronically, the Monaro was a Calais, so you got power everything and a good stereo. These early ones are the best value, too, but as with anything, really mint, low-kay cars can exceed the price range we’ve nominated. 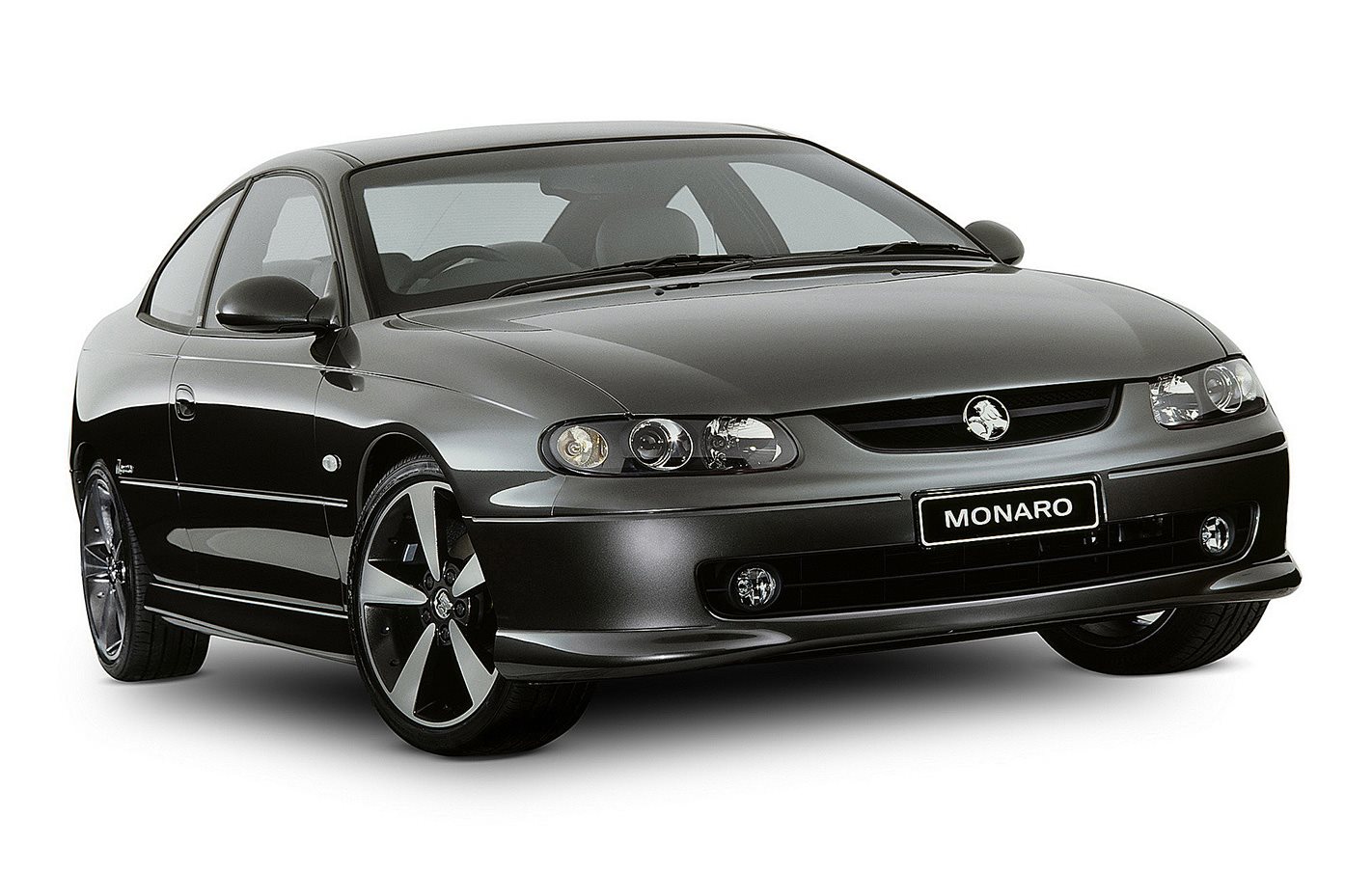 The Series II cars arrived in December 2002, just weeks after the VY Commodore hit showrooms. So, the Series II CV8 picked up the improved (to most people’s eyes) dashboard and detail stuff like the gearknob.

The Series II also introduced us to the first limited-edition model, called CV8-R. Offered only in Turbine Mica, the CV8-R boasted exclusive rims, different badging, white dials and leather-wrapped steering wheel, shifter knob and handbrake handle.  But beyond that, it was the same LS1 package (but with 235kW), with either a four-speed auto or six-speed manual. 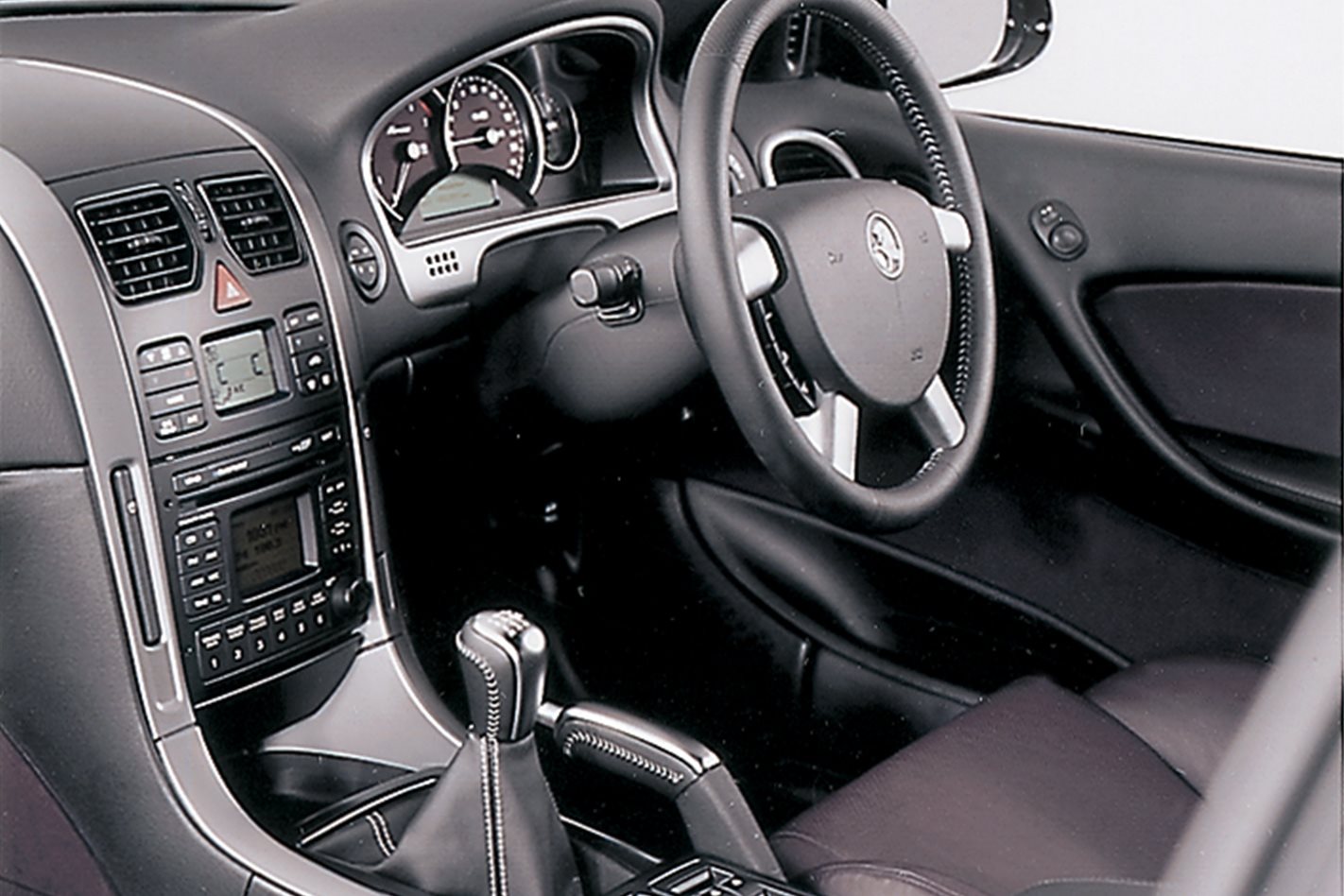 You could still buy a Series II CV6. Nobody did. 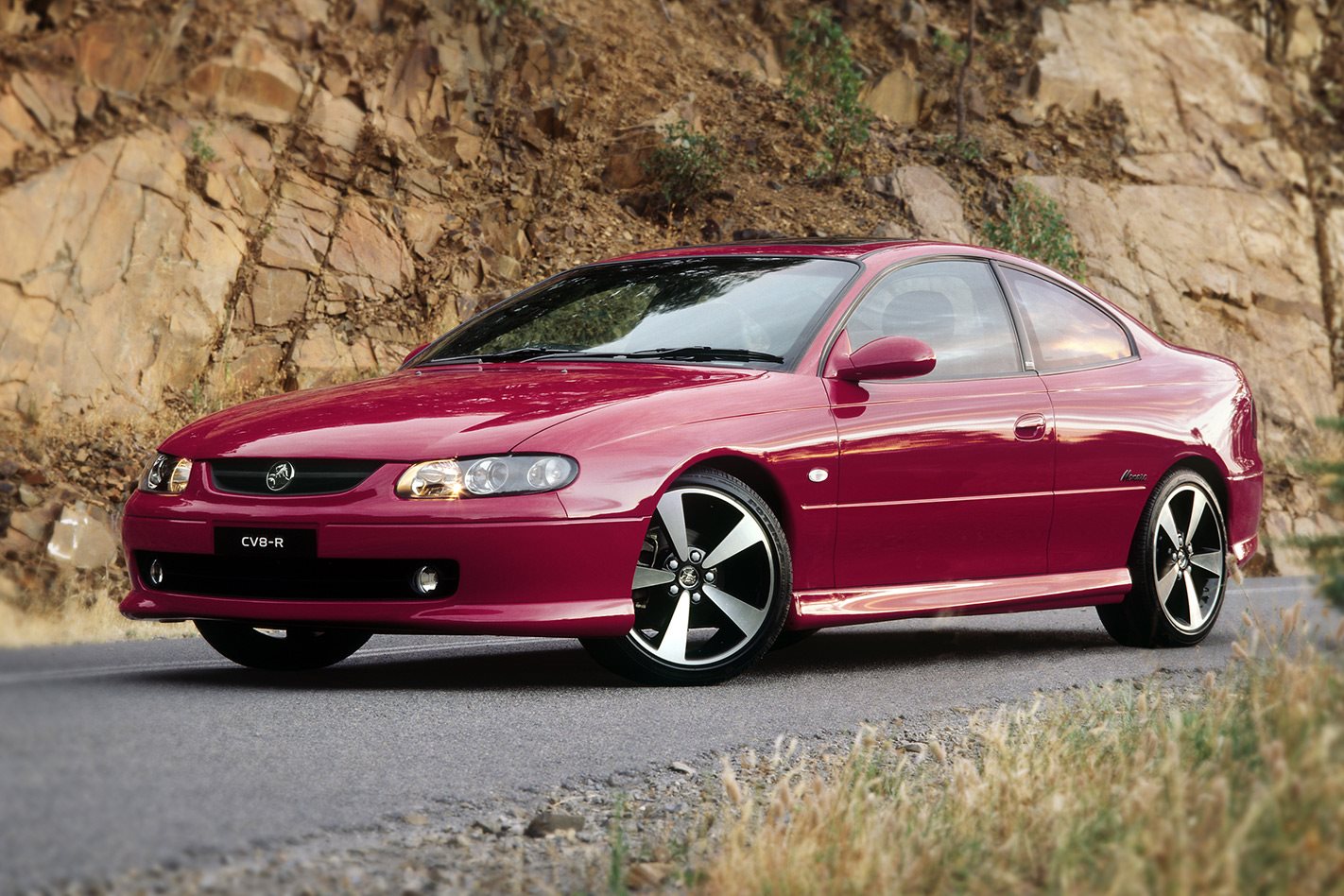 From August 2003, the Series III was the one in Holden showrooms. Holden was careful not to screw the pooch, so the changes were pretty minimal. In line with development of the LS1 for the Commodore, however, Holden had managed to stretch output to 245kW, so that’s what the Series III Monaro got too, along with interior upgrades. Other changes were mostly detail ones including deleting the external aerial and integrating it into the rear windscreen. The overall cleaner look was helped by new alloys, and as Commodores became better put together, with tighter bodies and fewer interior squeaks, so did the Monaro. 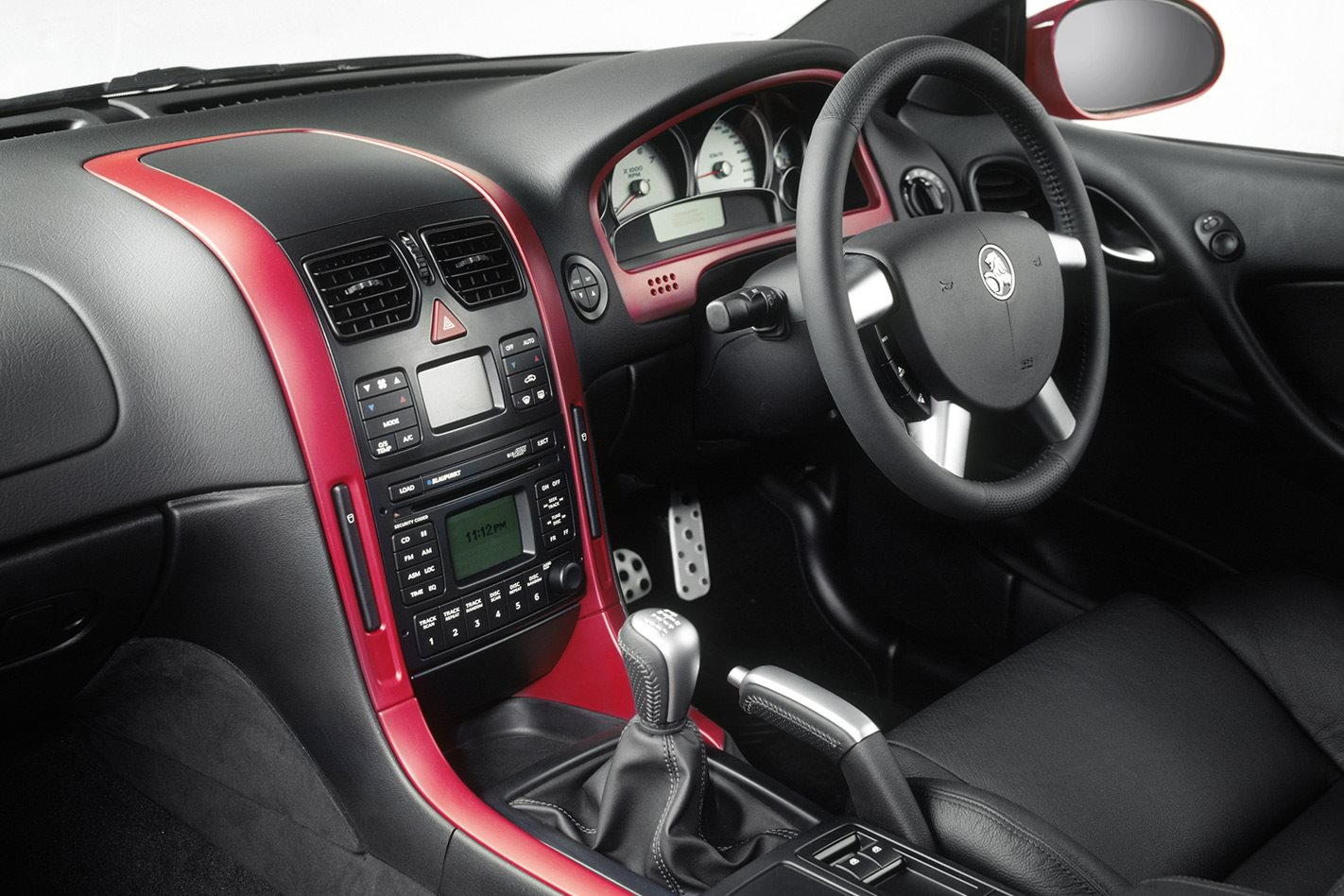 The CV8-R was back for the Series III, but this time only in Pulse Red. The CV8-Rs also scored an electric sunroof as standard, some interior-dress ups, ‘black chrome’ badging and the same 18-inch five-spoke rims that were fitted to the previous model.

The VZ was the last version, arriving in September 2004 and selling right through until 2006. Now, given that Holden had introduced the six-litre LS for the last few months of production of its Commodore SS, everybody was hoping that mill would make it to the Monaro. It didn’t (unless you count the very last HSV versions, which we’ll look at in a later issue). 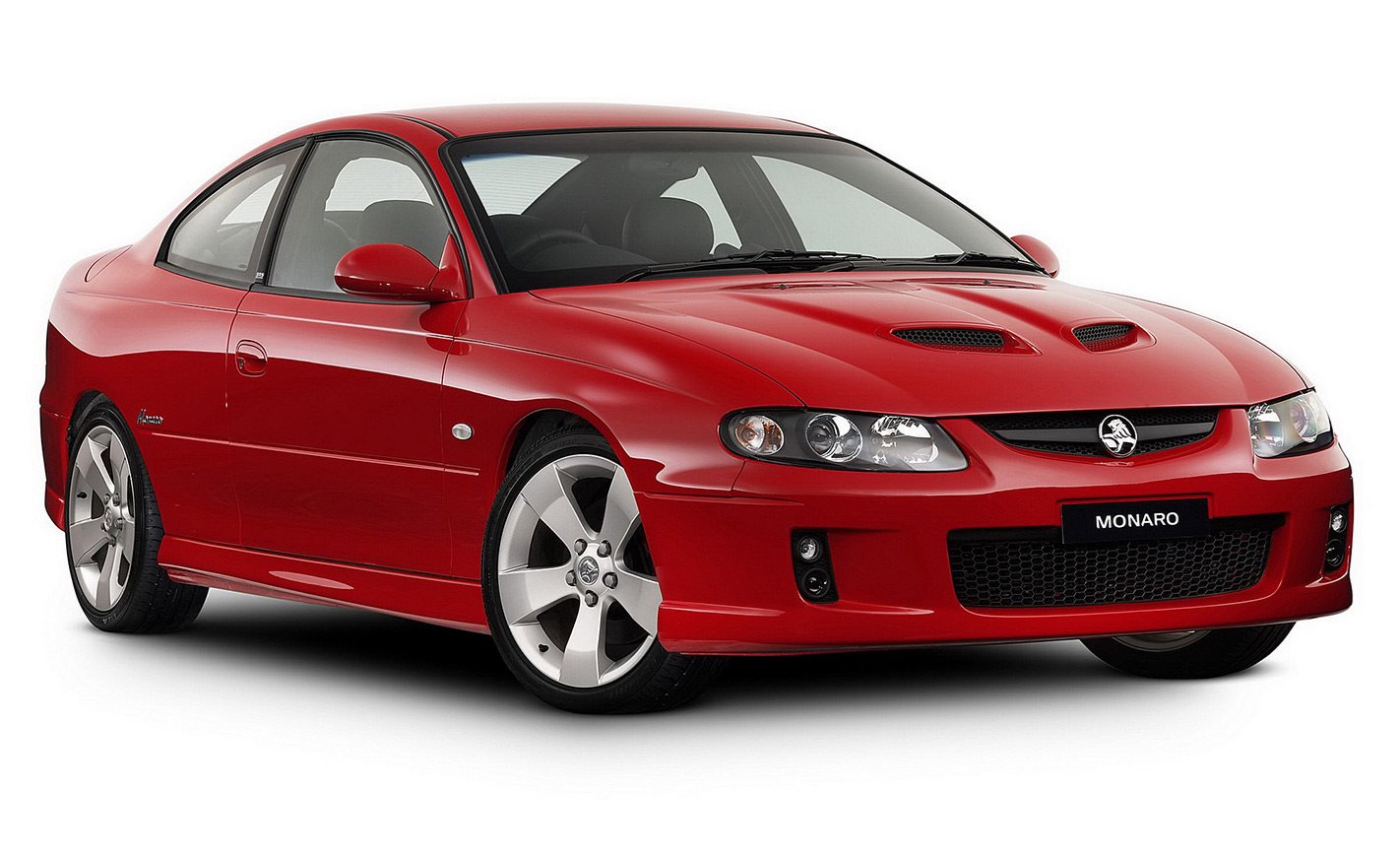 But because the Monaro was being exported as a Pontiac, Holden dragged in a few changes, including those twin bonnet scoops you either love or hate, the dual exhaust system and the USA-compliant fuel tank that was placed in front of the rear axle and ate most of the car’s boot space in the process. Some of the mechanical simplicity was lost with the move to throttle-by-wire.

A limited edition called the CV8-Z (only 1200 units) was a bit tasty, though, with its standard sunroof and specific alloys.

BUYING A HOLDEN MONARO CV8 - WHAT TO LOOK FOR

What you have to remember here is that the first of these cars are now more than 15 years old. Even the youngest of them will have already blown out 10 candles, so you need to shop carefully.

On really early cars, you could get lumped with an LS1 that was built on a Monday morning. Some of these things rattled when cold, and quite a few of them liked oil like your mad uncle likes beer. To be fair, Holden fixed and replaced a lot of engines, so a real problem child should have been ironed out by now (check for an ‘X’ stamped into the engine number to show a ‘fixed’ engine). Generally speaking, the later the build date, the better. Piston slap? Yep, they all seem to do that, too, mainly first thing in the morning; it should go away by the first gear change. 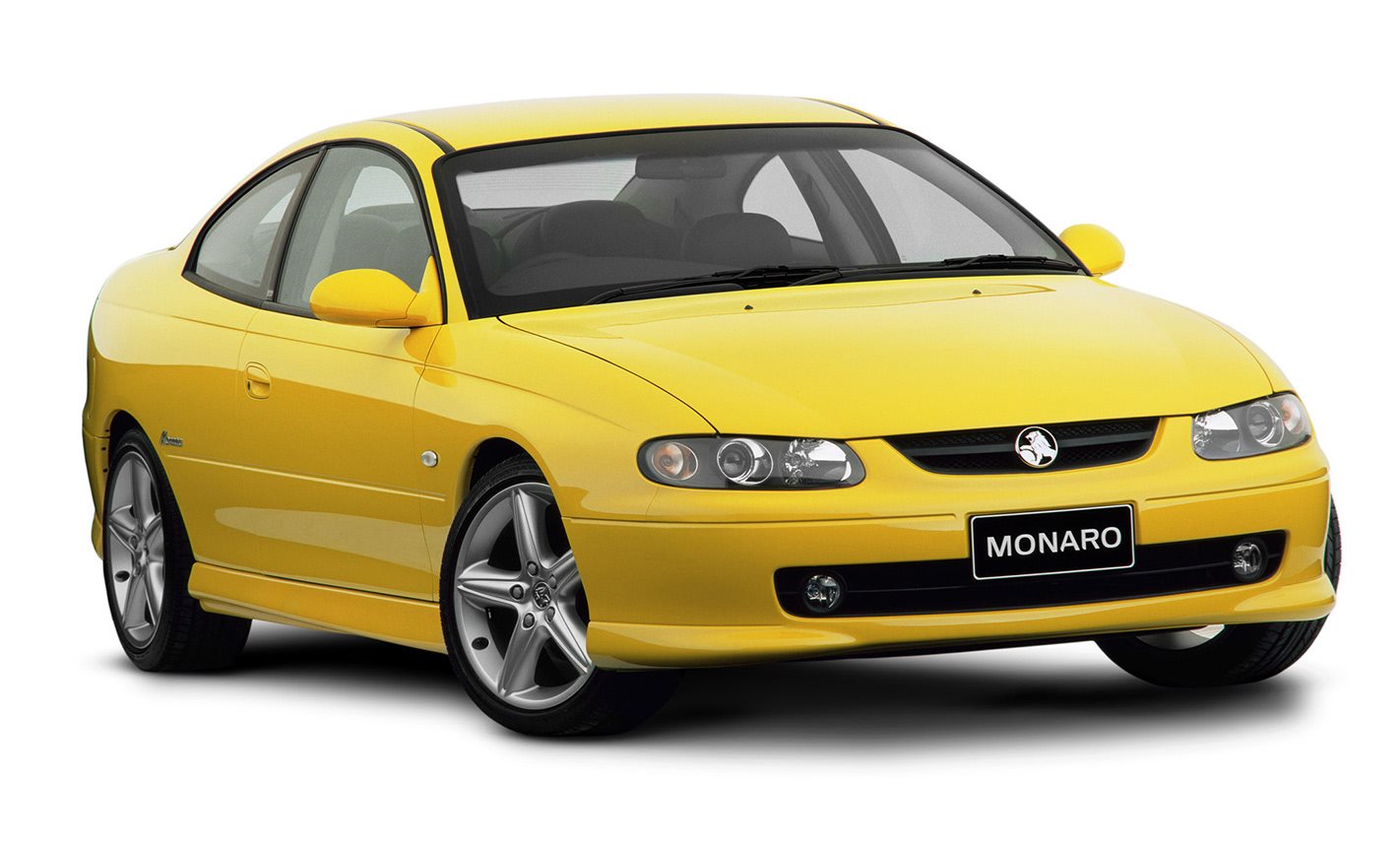 Try to find where the car is parked overnight and check for oil spots. Some early LS1s had a batch of sump bolts with the magical ability to loosen themselves; other times it can be a rear main seal that’s at fault. The LS1 could also be hard on lifters, so a tickety-tick motor is probably up for a set of those. Chill, there are only 16 of them. Beyond that, the six-bolt mains (cross-bolted from the side) mean the LS will take an awful hammering (seen those limiter-bashing vids on the interweb?), and we’ve seen plenty with 300,000 and even 400,000km on board and still going strong. They love fuel around town, but driven sanely on the highway, you’ll get your average consumption comfortably into the eights.

Because the Monaro had a longer door than a Commodore, the door trims are a bit hand-made. In some cases, the covering on the capping of the door trim can peel or crack, and you can’t buy the trims new anymore. Some of the interior trim bits are Monaro-specific, too, and can be hard to locate now. The little catches that secure the lids on the centre-console storage cubbies tend to go west pretty young, but you can buy them on the web and they take about two minutes to replace.

BUYING A HOLDEN MONARO CV8 - WHAT TO AVOID

Being a Commodore underneath that slinky metal means that there’s nothing very exotic going on. True, the Monaro did get a slower steering rack than the Commodore to make it steer a bit more accurately, but beyond that there’s a lot of interchangeability.

What you really don’t want to buy is a car that has been used for burnouts, or one that is so heavily modded the nice people at the rego office run and hide. Insurance companies don’t like hot rods, either. A set of headers is a nice touch, and big brakes are always appreciated, but when it comes to stuff like an aftermarket blower, you really want to know who did it and what bits they used. A stocker will always be easier to sell when it’s trade-in time. 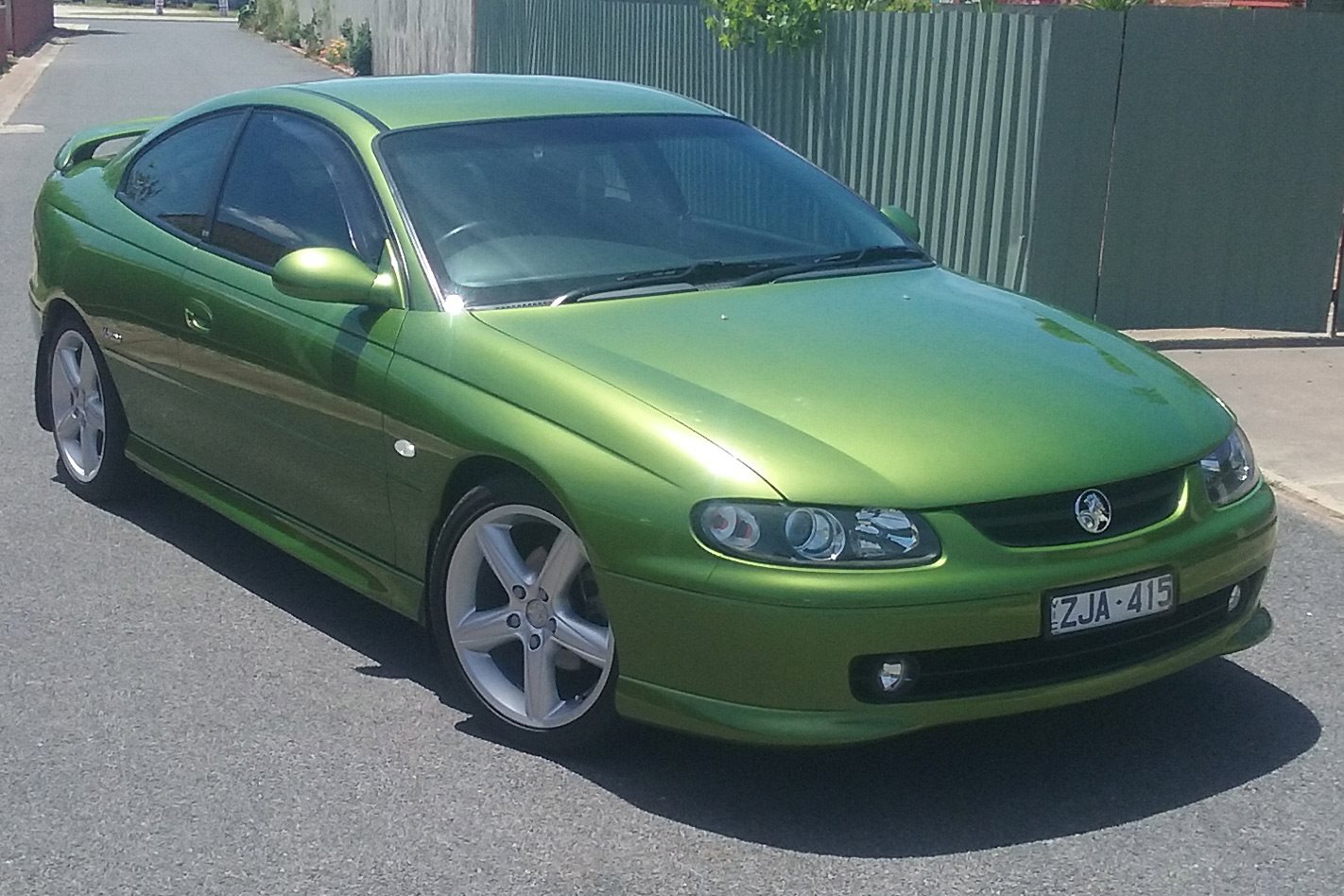 The nice thing about shopping for a CV8 is that you’ll still turn up low-kay, one- or two-owner cars that have been absolutely babied. Where the equivalent SS Commodore will have been to the moon and back, the fact that the Monaro was so special from day one has meant that plenty have been stuck in garages and used sparingly. So that’s what I went looking for.

Inevitably, my budget crept up to the mid-20s, mainly after looking at scruff-boxes with cheesy, rip-off HSV front clips and Never-Heard-Of-’Em brand alloys. Initially I wanted a late CV8-Z with a factory roof, even though the boot is compromised, the big exhausts look cheap (to me) and those bonnet nostrils would have kept me awake at night. But by not ruling anything out, I stumbled on a mint, low-kilometre (61,000km when I bought it) Series I manual in Hothouse Green with a plain black leather interior and much evidence of previous lovin’. And since it was about the same money as a scruffy CV8-Z with three times the kays on board, that’s what I bought.

Are we happy together? You betcha. I don’t reckon the LS1 has quite the same personality as the Iron Lion in my VN SS, but you can’t argue with the efficiency. My PB is 7.9L/100km on a highway run. And the Monaro does everything so damn easy.

The lesson is a simple one: Buy the best car you can on your budget, rather than get hung up on options and colours. I’ve even come around to the original dashboard.