The General's billion-dollar baby is no immaculate conception, but it meets the COTY criteria better than any other new car of 2006, shining through as the most deserving recipient of Australia's premier motoring award.

HOLDEN'S VE Commodore, the most outstanding sedan ever designed, engineered and manufactured in Australia, is Wheels Car of the Year for 2006. The award is to the entire family, all the way from the modest $34,490 Omega to the muscular $74,990 HSV GTS.

It's not easy for such an extended model line-up to win the nation's longest-running, most coveted automotive trophy. The COTY rules of engagement stipulate that each vehicle range is considered as a whole. This is a crucial point of difference between our award and those handed out, by the dozen, by other media organisations. COTY's singular ability to acknowledge breadth of achievement, as well as depth and height, is the reason it's valued so highly by manufacturers. Every model in the VE Commodore range shares the same excellent key core attributes, and these provided the foundation for Holden's victory.

For many readers, this result will not be a surprise. Some undoubtedly will call it predictable. Most issues of the magazine since Holden's launch process began back in August last year have contained close analysis of various models in the line-up, and it's been mostly complimentary. This doesn't mean that Wheels believes the VE Commodore range is flawless: there is no such thing as a perfect car, or car range, and the Holden is no exception. 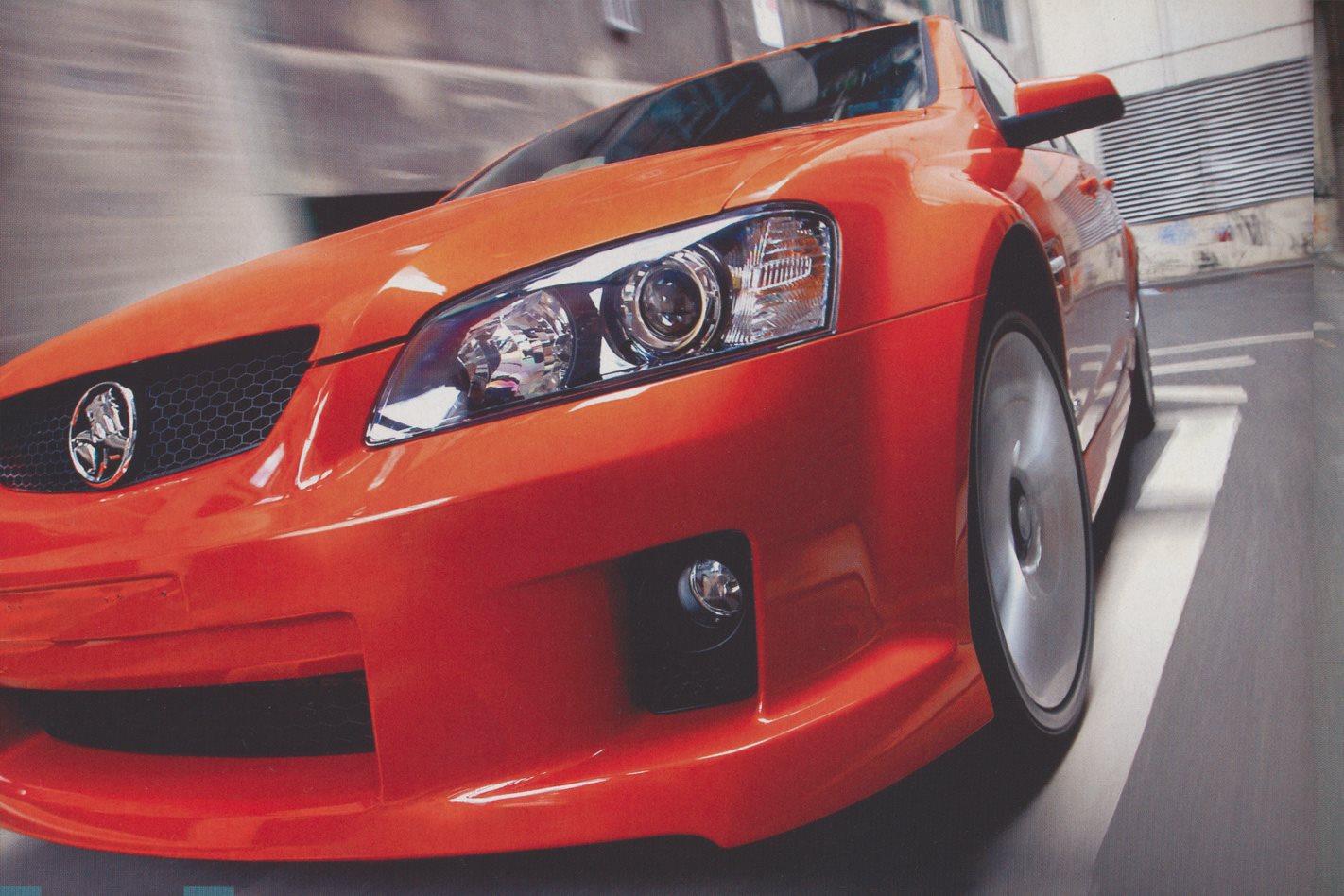 The thickness of the VE's A-pillar, for instance, can hinder vision in certain circumstances. Commodore's handbrake may be a clever solution to the difficulties in building both left- and right-hand-drive versions of the car, but it's far from ergonomic perfection. That the Holdens are equipped as standard with a 17-inch temporary spare (HSV models have full-size spares) isn't a huge issue, given that optional full-size spares are available and reasonably priced. For the steel-wheeled Omega the charge is $100; for all others it's $250. This isn't outrageous, but because Commodore customers have come to expect a full-size spare, Holden should be doing more to highlight the change.

Resale value is another area where the Commodore could do better. With RedBook ratings ranging from 46 to 54 percent across the range, the VE is hardly a gilt-edged investment. But it is better than both the Falcon and the 380, and virtually on a par with the Aurion, which enjoys a roughly two-percent advantage across the range .

And let's not ignore the two recalls. There's a popular, though mostly incorrect, view that recalls are an index of quality. If this is so, then BMW, Mitsubishi, Hyundai and Subaru are in the same boat as Holden. All of these makers had recall programs active at the time of COTY testing, relating to the 1 Series, 3 Series sedan, 5 Series (E34), Grandis, Santa Fe, and Liberty and Outback. Recalls are a common occurrence in the automotive business for practically every manufacturer. 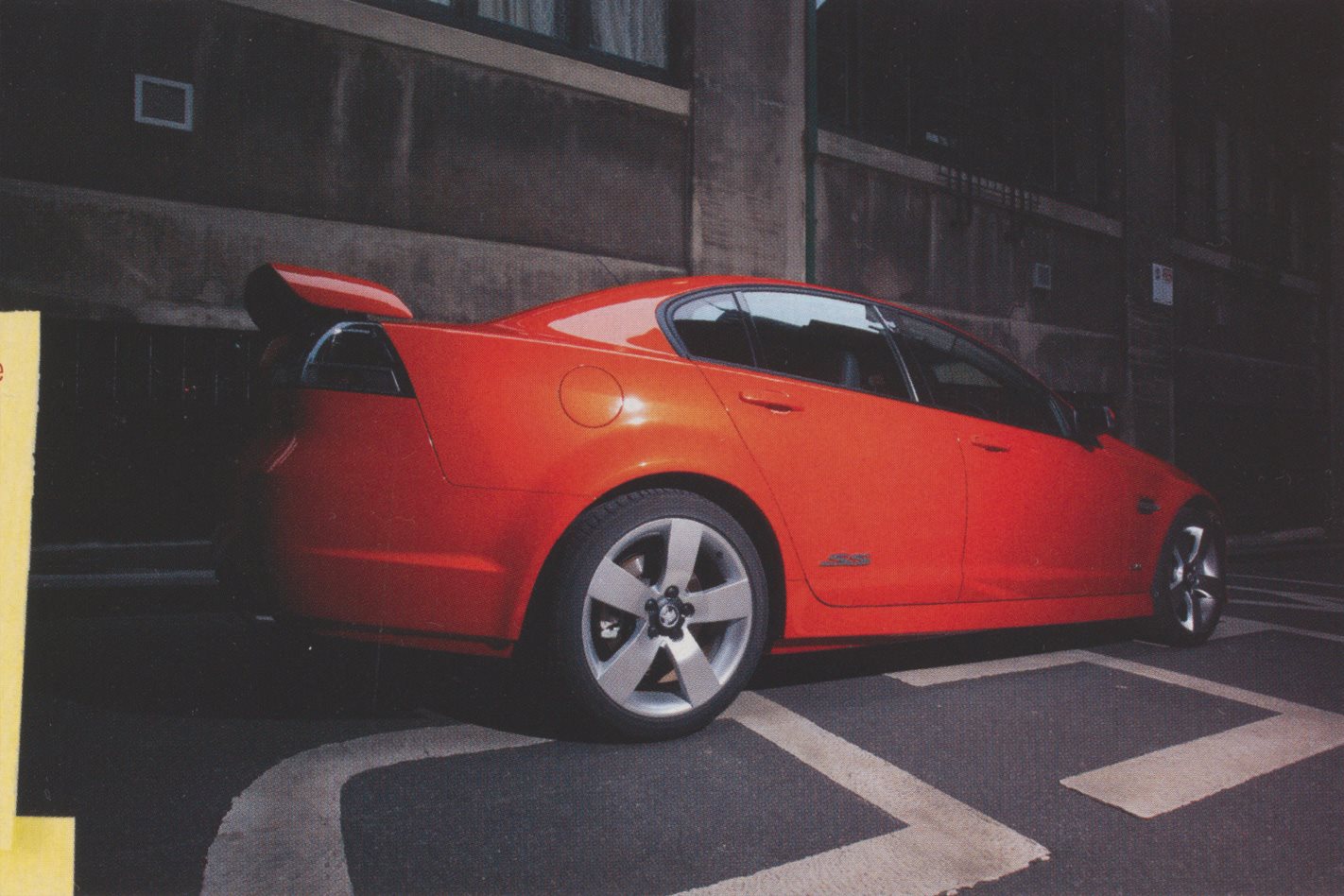 As it stands, the only quality or reliability issues we had with the eight VEs on test related to tyres on the HSV GTS. While there's no denying the visual appeal of the 20-inch deep-dish alloys, the liquorice-thin Bridgestone Potenza REOSO tyres are far too damage-prone.

Sharp-edged potholes claimed three tyres during testing, at a ruinous replacement cost of $750-$800 per tyre. Other issues are model-specific. The four-speed automatic in the Omega and Berlina V6 isn't good enough these days, even in the least expensive models. That the Omega's price doesn't include air-con, when 99 percent are built with it, is a joke. Less funny is that the Omega's passive safety hardware list is so short. While only driver and passenger front airbags are standard, the option of four additional airbags (two front-seat side bags and two full-length curtain bags), plus active front- seat head restraints, is at least reasonably priced at $2000. In contrast, adding two optional head-protecting side-curtain airbags to the Berlina, SV6 and SS models, all with four standard bags, costs $2500 because the extra airbags are bundled with leather upholstery. 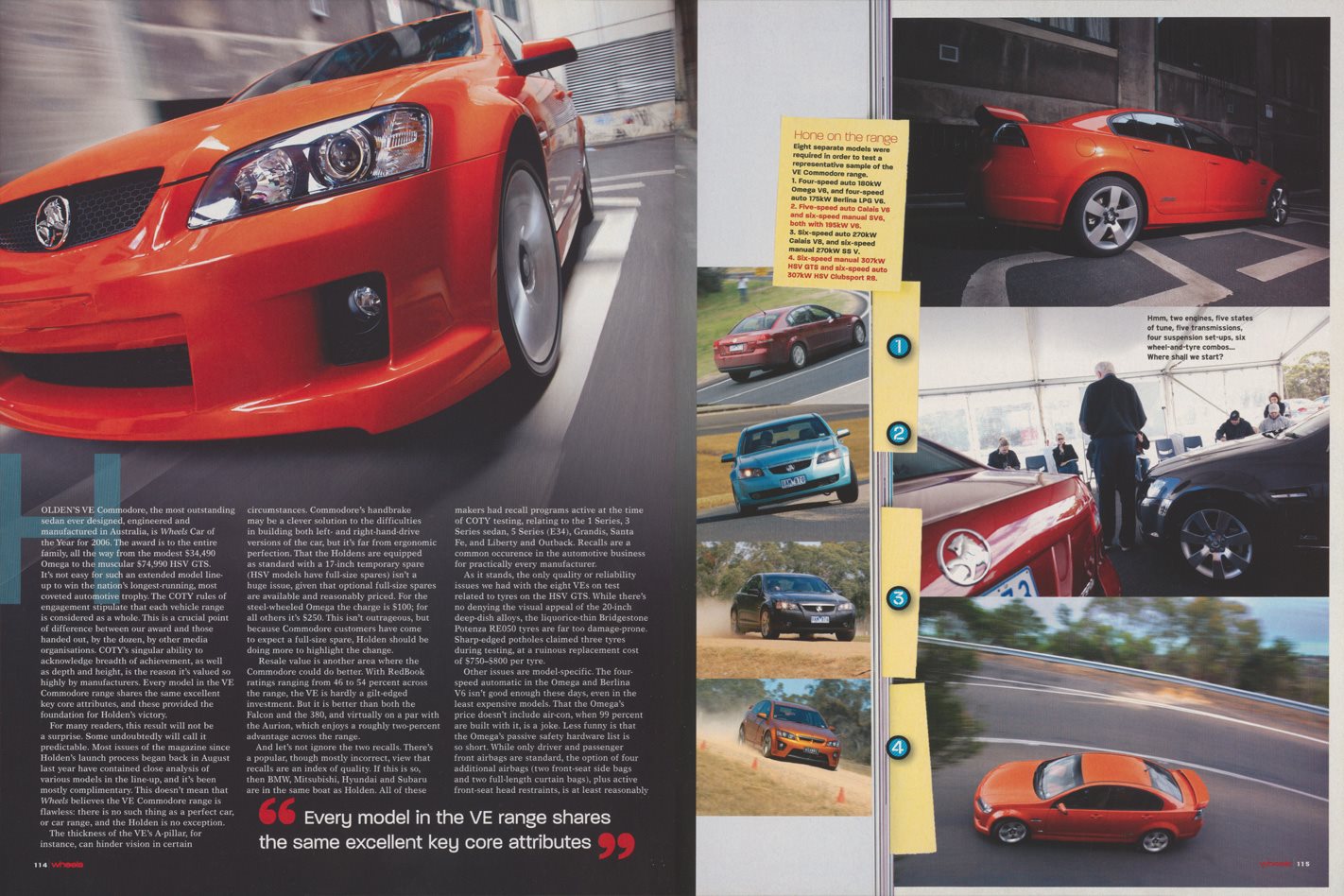 There's no doubt that side and side-curtain airbags deliver incremental reductions in the likelihood of death or serious injury in some types of impact. A bank-vault body, on the other hand, promises protection in all directions. The VE has a mighty tough passenger cell, stronger than any car ever made in this country, and probably better than many premium-price imports.

Holden painstakingly designed the VE's core structure to be stiff in all the right places, using the latest techno-tools to do it. The body structure is intended to dissipate impact energy in a controlled fashion where space is available, and to stoutly resist intrusion where there isn't. The value of extensive computer simulation and hundreds of component and system tests was proved by the destruction of 79 complete prototypes in a variety of barrier tests. Holden had no choice but to resort to widespread use of high-strength steels, and, for the crucial B-pillars, advanced manufacturing technology to achieve its body-strength objectives. 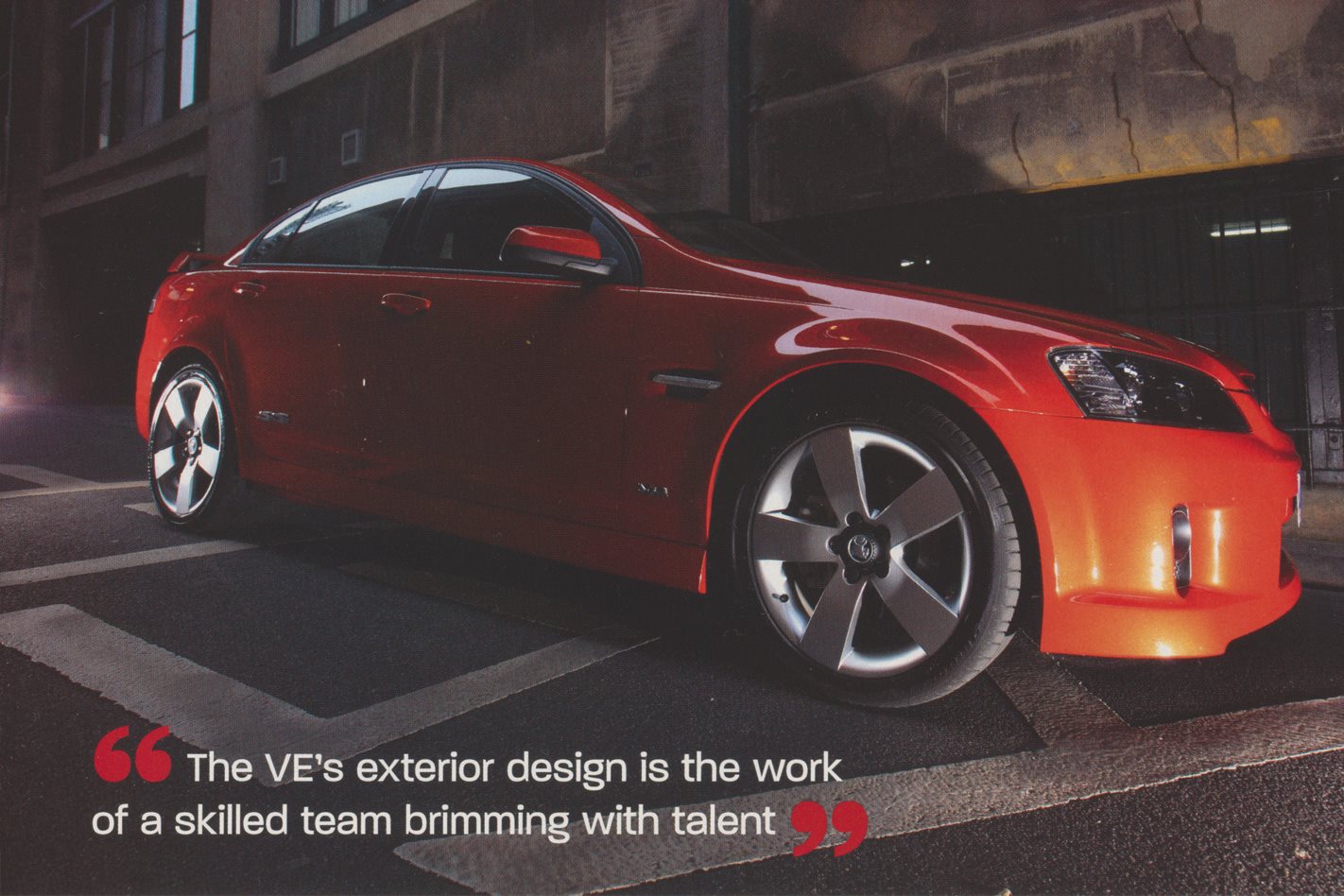 The stiffness of the Holden body brings benefits in everyday driving, too. Rigidity is quite literally a firm basis for chassis engineers to build on, and Holden's dynamics team took full advantage of the VE's inherent potential. The car's all-new front and rear suspensions are superb. Unlike previous Commodores, and many competitors, they reflect the latest and most up-to-date thinking on suspension layout. Up front is a double ball-joint strut and A-arm, with front-mounted steering rack; at the rear there is a compact four-link coil-spring set-up. The premium brands of Europe and Asia may make their suspensions from more exotic materials, but the Holden equals their design sophistication.

Expertly calibrated to cope with Australia's wide variety of often appalling road surfaces, all members of the range have fabulous steering feel and well-balanced handling – thanks, in large part, to near 50:50 weight distribution in all load conditions – with excellent ride comfort and good directional stability. The springs and dampers selected for the basic Omega and Berlina deliver a wonderfully lush ride. Indeed, some COTY judges' first impression was of over-softness, but familiarity usually bred content. "You think it's too soft, but it's not," noted Bruce Newton. "Steers very well and hangs on." 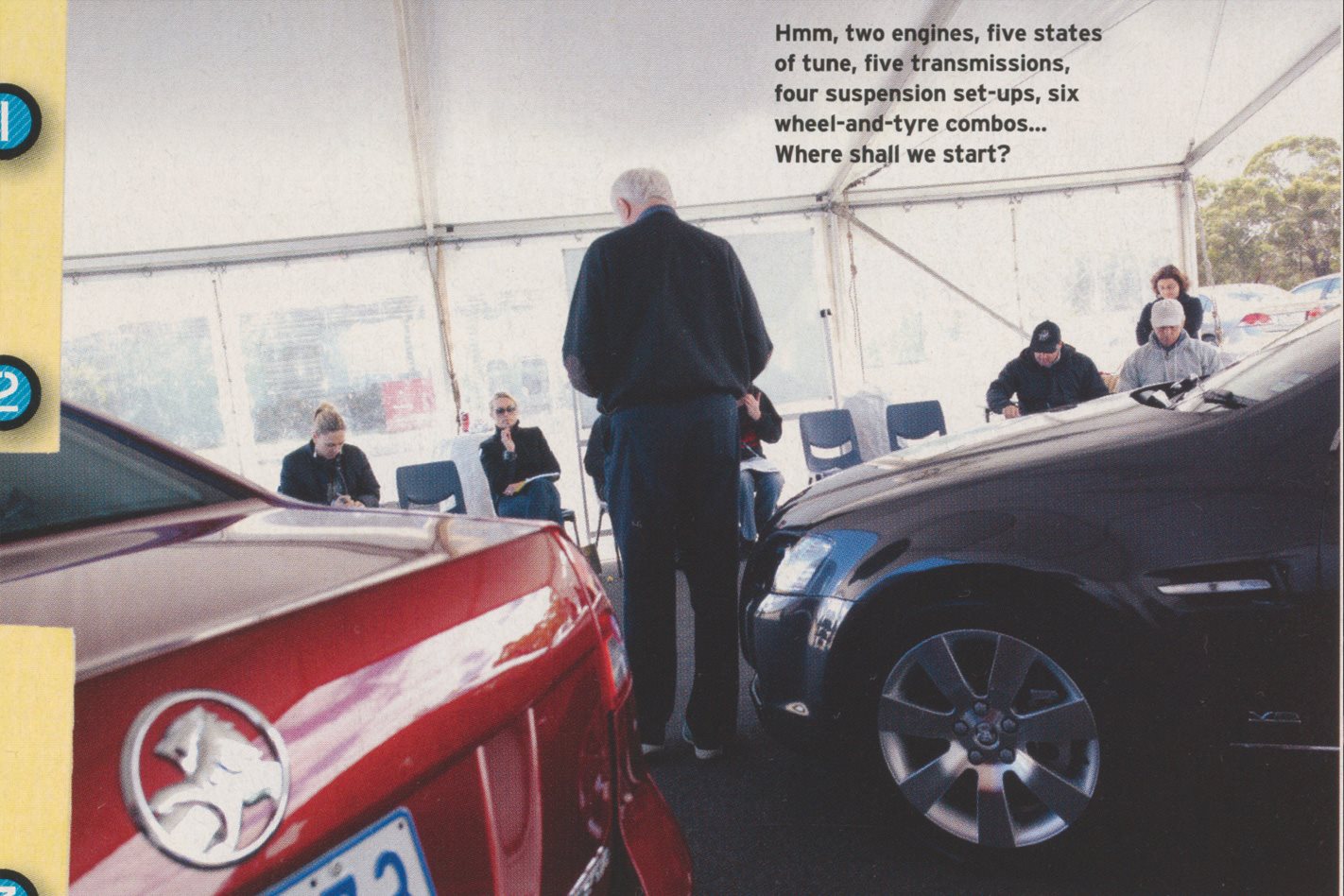 There was overwhelming praise for the handling of the other, more firmly disciplined models: the SV6, Calais, Calais V, SS and SS V, plus the HSV variants with their in-house-developed suspension calibrations. For COTY judges who hadn't driven it before, the HSV GTS equipped with Magnetic Ride Control magnetically variable dampers was a great surprise. They found MRC brilliantly effective, endowing the performance sedan with ride comfort unparalleled by anything like it.

Back-stopping the Commodore's responsive, yet predictable and trustworthy handling characteristics is an excellent set of electronic driver aids. The Holden's ABS and traction control systems are good, but its electronic chassis stability system is truly outstanding.

The VE Commodore's ESP is quite simply the best Wheels has ever driven. The switchable system, standard in every VE Commodore, is fabulously effective. Its subtle and early inverventions don't upset the cars' balance or detract greatly from driving pleasure. More importantly, the Holden's ESP is especially good on slippery surfaces, especially dirt. Overseas studies point to ESP's life-saving promise. In the case of the VE, it's a guarantee. 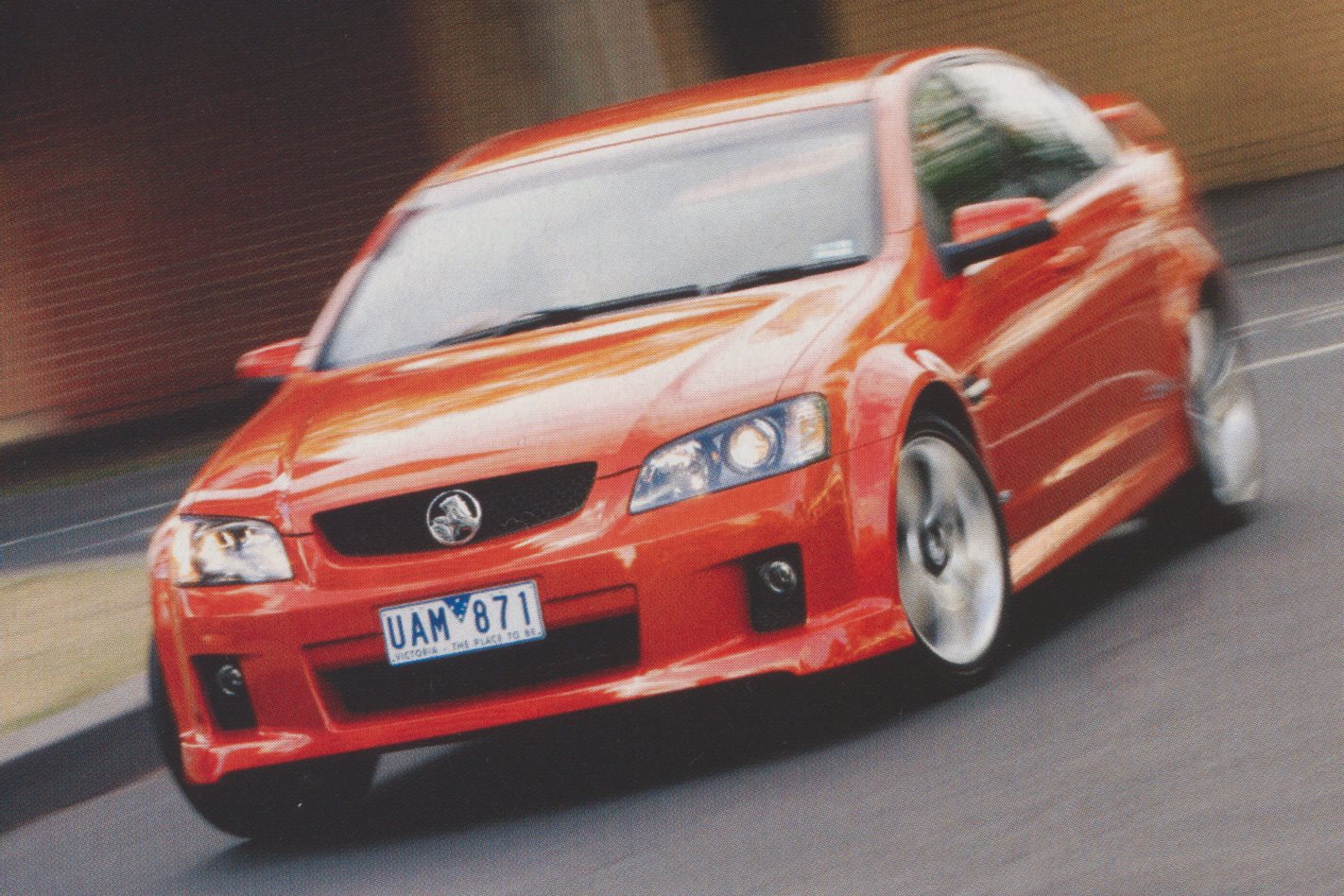 Holden's V6s don't deserve such glowing endorsement. While the 180kW and 195kW versions of the 3.6-litre engine - and the 175kW LPG-petrol dual-fuel version, too, for that matter –  feature up-to-date design and technology, they could and should be quieter. As mentioned earlier, the four-speed auto teamed with the 180kW and 175kW engines is a disappointment, while the 195kW engine's six-speed manual and five-speed auto are better, although still not benchmarks. By large six-cylinder class standards, the various VE models achieve fuel consumption that is average.

Some competitors are better, some are worse. Holden deserves some credit for the admittedly small reduction in official fuel consumption of the VE Omega, compared with its VZ Executive equivalent.

For those particularly concerned about fuel costs, there is the dual-fuel V6. At $3900, it's a fairly expensive option in Omega and Berlina, and you forfeit boot space, but it is, nonetheless, an alternative for cost-conscious, high-mileage drivers.

While there are those who ridicule the notion of a pushrod-and-two-valves-per cylinder V8 in a modern car, the 6.0-litre VEs mount a strong counter-case. This engine is compact, light and affordable, surprisingly refined and very effective. 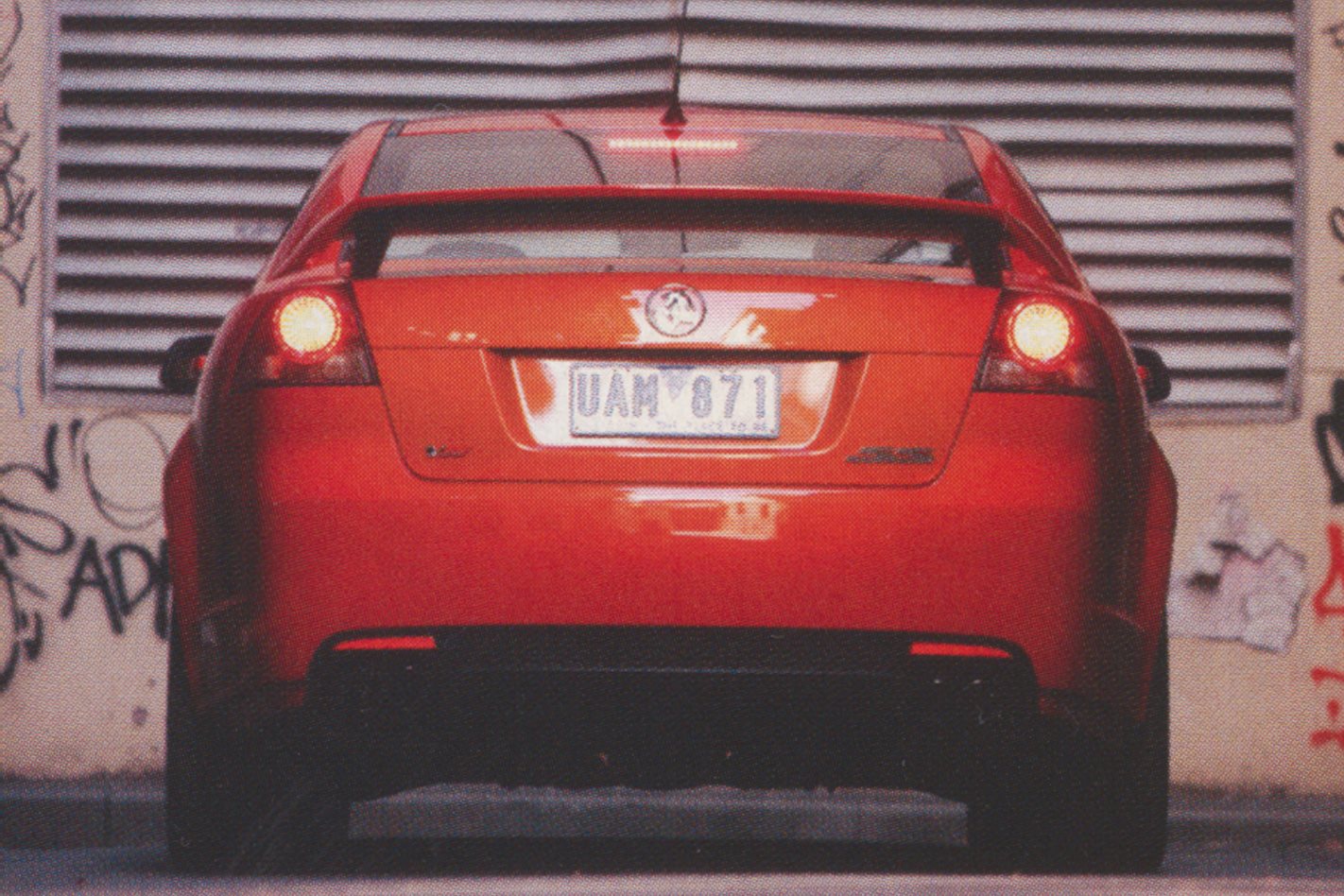 Hitched to either a six-speed manual or auto, its fuel consumption is also quite reasonable, considering the exhilarating performance it is capable of delivering. It's a little too early to consign the Australian V8 performance sedan to the dustbin of automotive history just yet.

No-one should write off Holden's design department, either. The VE's exterior is the work of a skilled team brimming with talent. The car's proportions are balanced and attractive, its confident stance implying dynamic ability.

The exterior designers' next challenge was to ensure that each model's defining details clearly indicated its status. They succeeded. So, too, did Holden's interior designers. Inside the car, model differentiation is dauntingly difficult. But with a clever concept that allowed a choice between horizontal and vertical design emphasis, despite a large proportion of shared components, the VE's instrument panel can express everything from monochromatic austerity (Omega), through colourful exuberance (SS V), to European-inspired luxury (Calais). The top-end models are, rightly, the most impressive. Throughout the range, there are very few lapses in taste. Despite the car including additional features, many of them customisable, it's obvious that Holden put great effort into making the human/machine interface user-friendly.

With a driving position adjustable to suit most sizes and shapes, VE also provides well for passengers. The rear seat, wide enough for three adults, has a broad, supportive base and well angled backrest. 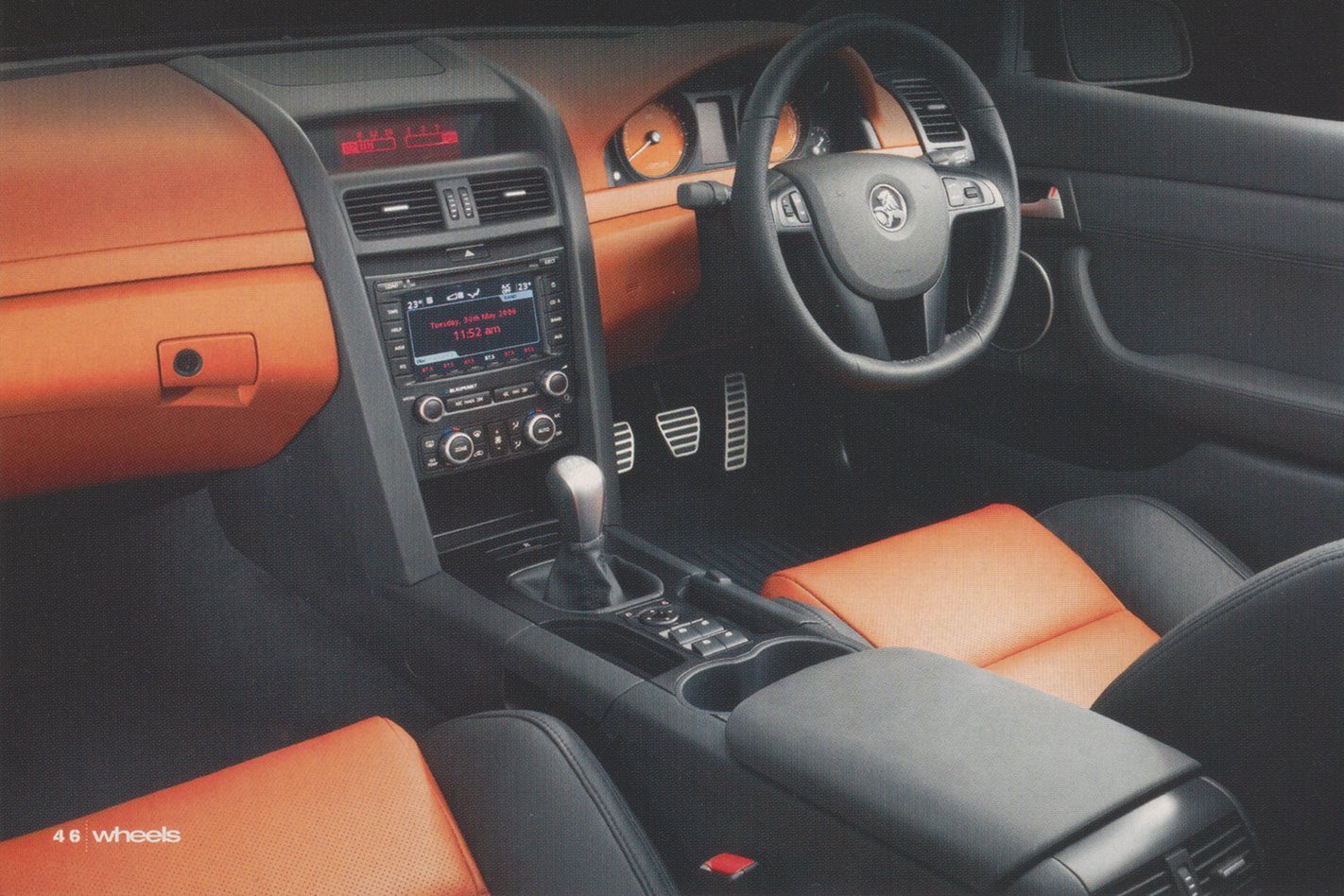 There's ample room for heads, knees and feet, and entry and egress, thanks to large, wide-opening apertures, are easy.

The Holden's boot is also damned good, a practical, straight-sided space, and its new parallelogram bootlid hinges don't intrude at all into the cargo compartment, meaning every cubic centimetre is usable.

Generally, the VE range is competitively priced, and middle and upper models, from SV6 to Calais V, lack little in comparison with their obvious competitors. The base-model Omega, however, faces competitors which may have lower prices, more standard equipment and superior drivetrains, but, in turn, they cannot match the Holden's strong points. As with every other VE, there's value in its bodily strength, unrivalled stiffness, accomplished dynamics, excellent suspension and steering, effective electronic driver aids, comfortable spaciousness and attractive design.

These are the same reasons why the VE Commodore - the entire range - is Wheels Car of the Year 2006.

The VE satisfies the award's criteria admirably, scoring well for function, value, safety and technology, if not efficiency. Just as important, from a customer's point of view, they're all cars for those who love the road.

From the lushly absorbent control of the Omega, through the crispness of the Calais and the eagerness of the SS, all the way to the raucous, upstart athleticism of the HSVs, the VE is a range that covers an amazing spectrum. While Holden will undoubtedly treasure the Wheels COTY trophy, it's GM's long-overdue recognition of the company's ability that is more important to its future. We'll be interested to see how many more awards are won by the other models that will be built by GM brands on Holden's VE architecture. And there will be more, we're certain...