Hyundai’s most affordable performance car is now on sale, undercutting the Veloster SR Turbo with a pricetag of $28,990.

And at $28,990 for the manual-equipped model ($31,290 for the auto) the Elantra SR Turbo is Hyundai Australia’s most affordable performance car, undercutting the quirky Hyundai Veloster SR Turbo three-door coupe by $660.

The Veloster donates its 150kW/265Nm 1.6-litre turbo engine for the Elantra SR Turbo, but unlike the Veloster, the Elantra SR Turbo is gifted with a proper multi-link independent rear suspension instead of the cheaper, simpler torsion beam axle used for regular Elantra models, improving handling. 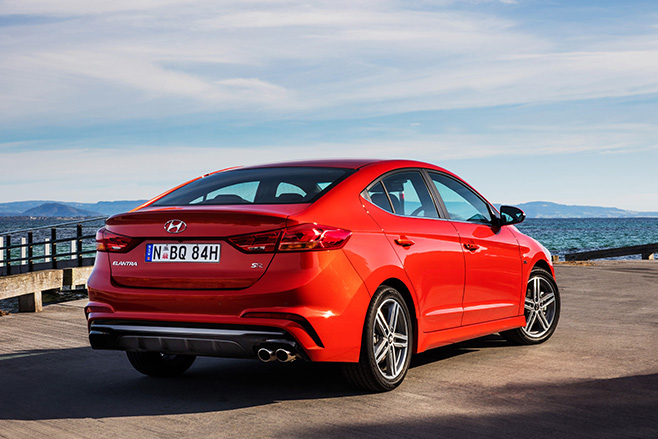 Essentially the same rear suspension hardware as used by the next-generation Hyundai i30 small hatch, the Elantra SR Turbo’s back axle has also been fine-tuned by Hyundai Australia’s local engineering team to tailor its ride and handling to local conditions.

Larger front brakes and a faster steering ratio round out mechanical changes for the Elantra SR Turbo, though it’s worth noting that auto-equipped Elantra SR Turbos come with a seven-speed dual-clutch transmission. Elantra models fitted with the 122kW/192Nm 2.0-litre non-turbo engine receive a conventional six-speed automatic.

Hyundai doesn’t mention performance numbers, but with the SR Turbo outperforming other “sporty” turbo small sedans like the 132kW Holden Cruze SRi-V and 140kW Nissan Pulsar SSS, Hyundai’s hot Elantra should be one of the quickest in its segment. 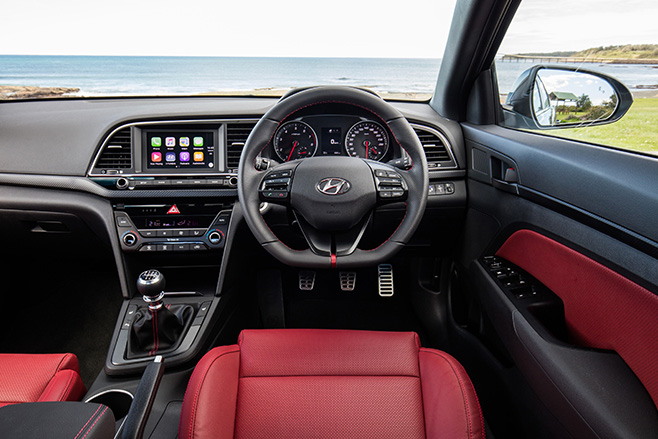 As the flagship model of the Elantra range, the SR Turbo also comes with a long list of standard equipment. Features such as blind spot monitoring, lane change assist and rear cross traffic alert are standard issue on the SR Turbo, as are bi-xenon headlamps, a sporty body kit, alloy pedals, black headliner, a flat-bottomed sports steering wheel and front parking sensors.

The only options are a red leather interior (which replaces the standard black cloth) for $295, and metallic paint at $495.

Though its local launch timing has yet to be announced, we can expect Hyundai’s next-generation i30 SR to take a near-identical feature set to the Elantra SR Turbo – 165kW engine and all.

Click here to the full review on the Hyundai Elantra range.