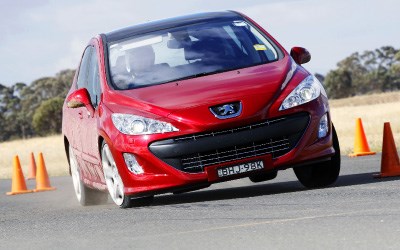 Peugeot's longer, wider, lower and heavier - by a hefty 155kg on the base model - 308 presents to the market with an almost bewildering choice of models.

Buyers select from three petrol and two diesel engines, five- and six-speed manual gearboxes and four- and six-speed automatics, in five-door hatchback or long-wheelbase Touring (wagon) bodystyles. All for sales of less than 3000 cars in 2008, a below-par result that is at least partly explained by the elevated prices: a $25,990 entry-level sticker shocked the panel. But, as the judges quickly discovered, the French attempt to portray the 308 as a Euro-premium isn't supported by the driving experience.

Peugeot admits the 308's basic architecture is carried over from the 307, and the two models share the same 2608mm wheelbase (2708mm in Touring), while retaining the same windscreen-forward design, tall proportions and the marque's strange obsession with a long front overhang and a wide-mouthed grille. The days of Pininfarina's elegant influence on Peugeot design are long gone. The front suspension is MacPherson struts, and the 308 preserves hydraulic power-steering rather than swapping to a new electric system. Against the class best, the retention of a torsion-beam rear suspension, rather than the independent multi-links of the Mazda 3, Golf and Focus, negatively impacted on ride and handling.

On the varied surfaces of the proving ground, there was uniform acknowledgement that the 308 was a significant improvement in handling over the 307, but the judges still found plenty to criticise. The disappointing performance of the throbby 1.6 petrol engine (shared with the Mini), especially when tied to the lazy and inconsistent auto tranny, worried the panel. "Slow, slushy, slippery, horrible," exclaimed a frustrated Stahl. Some felt that at the price, the base 308 XS deserved the smoother and better performing 1.6-litre turbo of the $30,590 XSE, though the downside was obvious - the added grunt introduced unwelcome torque steer.

From behind the wheel it was impossible not to be impressed by the 2.0-litre turbo-diesel when it was tied to the excellent six-speed automatic. This combination is relaxed, impressively responsive and undemanding.

Apart from the obvious performance differences, the most striking divergence between the various models was evident in the steering and ride. On the petrol models the steering was lighter and more fluent than that of the diesels, which was heavier and slower to react. Yet, even among the petrol engines the steering feel varied, to the point where some judges believed the 1.6 XTS had a quicker steering rack that produced more 'pointy' handling, at least on smooth blacktop. Rack rattle and kickback were obvious on rough surfaces, while the ESP performance produced a mixed response, and the ABS braking was judged no better than average. The front suspension on a couple of cars groaned and knocked over corrugations, while the ride varied between acceptable and choppy, verging on harsh. "Crashy ride, poor by the class standard," complained Carey.

The French affliction for a weird driving position continues. The long-arm/short-leg relationship between driver and car is exaggerated by flat and high pedals and soft, flat seats that fail to deliver proper support. Recently, Peugeot has made huge strides in terms of perceived quality and the 308 is the best yet. Materials, textures and finish are ahead of the 307, if not quite to Golf standards.

If the hatchback failed at the first ballot, the better driving Touring gained solid support from a couple of judges, predictably those with young families who saw the extra value and appeal of what is essentially a crossover model with three rows of seats. Because of the 100mm stretch in wheelbase (all behind the B-pillar) and the extra seats, the Touring was treated as a separate model
in its own right.

Peugeot calls the rear-most seats 'occasional', an honest description that indicates they are best used for sixth and seventh child passengers. Cargo space is limited when the third-row seats are in place, but they fold flat on the floor and can, like the centre row, be removed completely to produce a vast 2149-litre carrying capacity.

Any realistic comparison with its logical competitors marks the inconsistent and flawed 308 poorly for value, a major handicap in the COTY evaluation. The base car even misses out on standard stability control. So while the 308 pushes Peugeot forward in some areas, the way it drives still incorporates too many of the faults left over from the previous model. Nobody was surprised when the Pug failed to go beyond the first knock-out stage. 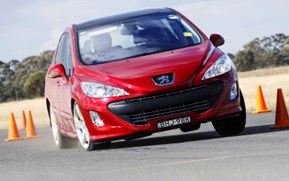 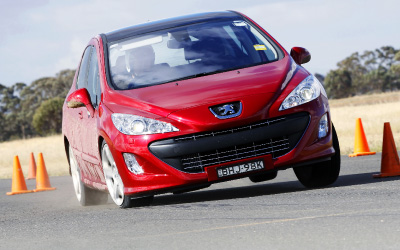 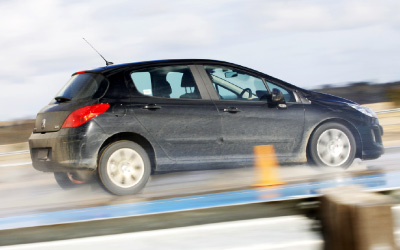