A civilian-clothed version of the Australian Army’s ride of choice has arrived with a price tag as big as its reputation for toughness.

Mercedes-Benz has launched its G-Professional brand in Australia, offering a military-hardened, rugged ute-backed version of its Mercedes-Benz G-Class station wagon.

The G-Professional 300 CDI cab chassis, similar in looks and build to the tray back that forms part of the fleet of G-Wagen military vehicles that have replaced the Australian Army’s Land Rover-based Parenties, beats the upcoming X-Class ute into Mercedes-Benz showrooms.

But before you look to trade in your Toyota Hilux or Ford Ranger – both are currently locked in a fierce battle for the title as Australia’s best-selling trade ute – you’d better check the bank account. The mining industry-proof G-Professional comes with a price tag as impressive as its more than two-tonne payload capacity – Mercedes-Benz will hit you up for $119,900 before on-road, or should that be off-road, costs. 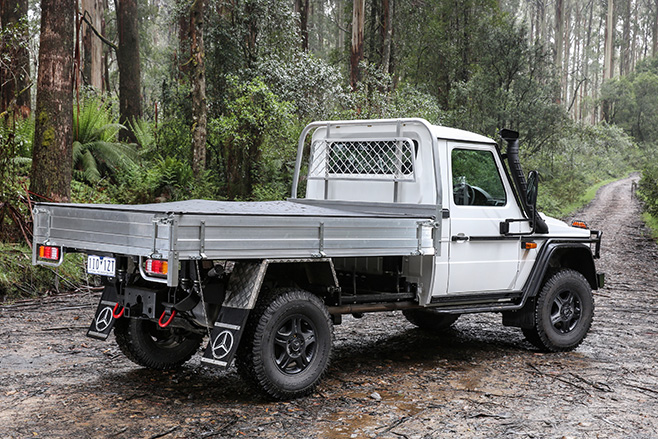 To put that in perspective, that’s in the same price range as an all-wheel-drive Mercedes-AMG C43 and a bag full of change. Toyota will sell you a G-Professional rivalling 4.5-litre V8-engined Landcruiser 70 Series GXL cab chassis with a five-speed manual gearbox, six airbags and part-time all-wheel-drive for $61,990, but air-conditioning isn’t standard and a centre diff lock is not available. The 70 Series also has a relatively diminutive 1225kg payload capacity.

The G-Professional gets a permanent all-wheel-drive system combined with three differential locks and a low-range gearbox – it will be more comfortable crossing mountains than carving their corners.

The standard fit-out of the G-Professional ute includes a snorkel and bull bar; protective grilles over the headlights and indicators; radiator and sump shields; and 16-inch alloy wheels fitted with all-terrain tyres.

It’s tough, too. The cabin, fitted with harder-wearing rubber floor mats, gets two floor-mounted drain holes so you can hose out the interior if needed. Speaking of water, it can wade through rivers up to 650mm deep, with the reinforced chassis sitting 245mm off the ground, more than 50mm higher than a Mercedes-Benz GLE-Class SUV. 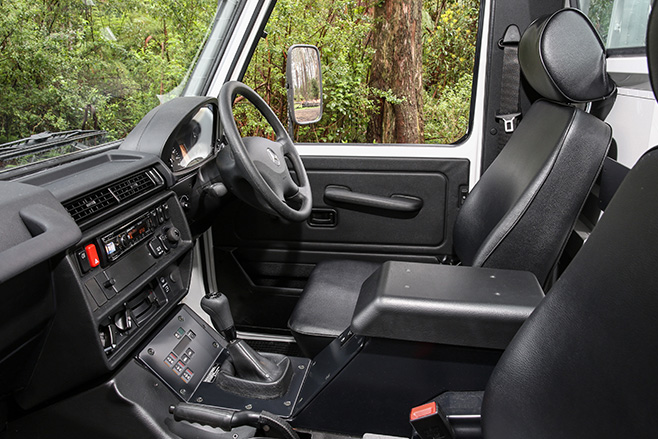 You also get a pair of 12-volt batteries so one always acts as a backup, storage boxes
under both seats, standard air-conditioning, central locking, an immobiliser for parking in the big smoke, a centre armrest and a lockable glovebox. Dusty arses sit on hardwearing vinyl seats.

Safety isn’t to the usual Mercedes-Benz standards, with only two airbags, but this isn’t what you’d consider a traditional Merc-badged passenger car. You also get a guardian angel in the form of electronic stability control with a switchable off-road mode, and anti-lock brakes.

The German carmaker recently won the contract to supply the Army as part of a multibillion-dollar replacement of about 7500 vehicles across the defence force, including 2268 G-Wagens.

The Army contract includes cab chassis, wagon and 6x6 versions of the G-Wagen. However, Mercedes-Benz says only the 4x4 cab chassis version of the G-Professional will sell for now.