Performance sub-brand could include hot versions of the Veloster, Tucson, i20 and Sonata.

Hyundai is already talking of expanding its N performance family – even before the first i30N has been revealed.

Speaking at the 2016 Paris Motor Show after revealing the RN30 concept car – a radical interpretation of a track-focused Hyundai i30 performance hero – the man in charge of performance cars at Hyundai indicated there was plenty more to come.

Albert Biermann, the former BMW M chief, told Wheels he would love to see a “really hot Tucson” and that the Veloster has “a lot of potential” for the N treatment.

But he tempered his comments by saying there were currently no concrete plans for either and that the focus was on launching the N sub-brand in 2017 with the i30N, a five-door hatchback set to rival everything from the Volkswagen Golf GTI and Subaru WRX to the Renault Megane RS and Peugeot 308 GTI.

“First we need to grow some place with the i30 N car,” said Biermann. “Then we need to see how this is going. If this is really growing fast then that is a good indication, then of course we can provide more.

“We cannot go from zero to 100 like this [clicking his fingers], that doesn’t work. So we better go step by step and… see what’s going on and then we make our next step.” 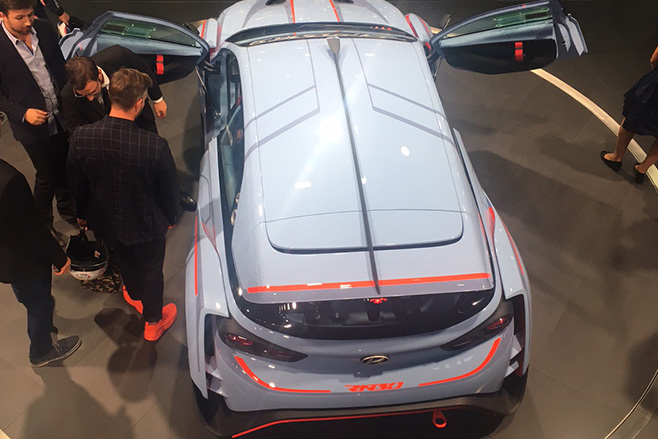 Biermann was initially talking of expanding the planned two-tiered i30N range – one more road-focused model and a higher output track-focused car with an electronic limited slip differential, more aggressive tyres and adjustable suspension – to include a four-wheel drive model with close to the RN30 concept’s 280kW of power.

But he later touched on other models that could get the N performance treatment.

One obvious option would be the Hyundai Tucson, which plays in the big (and growing) mid-sized SUV segment, something with broad appeal, especially in the US market.

“I would love to make a really hot Tucson but nobody wants it right now,” he said. “There is no plan to do that [now].”

He was critical of current go-fast SUVs, hinting there was more scope to do something more special.

He also said the i20 – a car no longer offered in Australia – would be an obvious choice for the N hot hatch treatment.

And the Hyundai Veloster coupe got a mention, too.

“That’s a really characterful car, it’s one of my favourites, I like it a lot… it has a lot of potential.”